In the 1970s, no television show was off-limits for merchandising; whether it was Grizzly Adams or Charlie’s Angels, if it was on TV you could be guaranteed it’d find its way to a lunch box, coloring books, jigsaw puzzle, Halloween costume, or any number of products marketed squarely at kids.  What’s funny is that many of these shows weren’t at all aimed at kids (i.e. Columbo, All in the Family, Baretta), yet they still got heavy merchandising in the toy department. Let’s have a look specifically at board games from TV shows – some are clearly children’s programs, some not so much…. 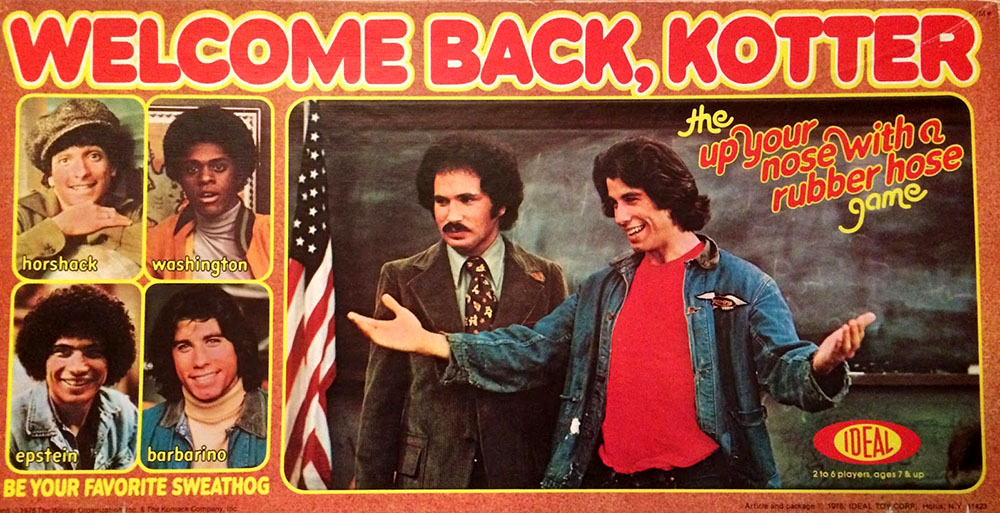 Suffice it to say, catch-phrases were huge in the 70s. 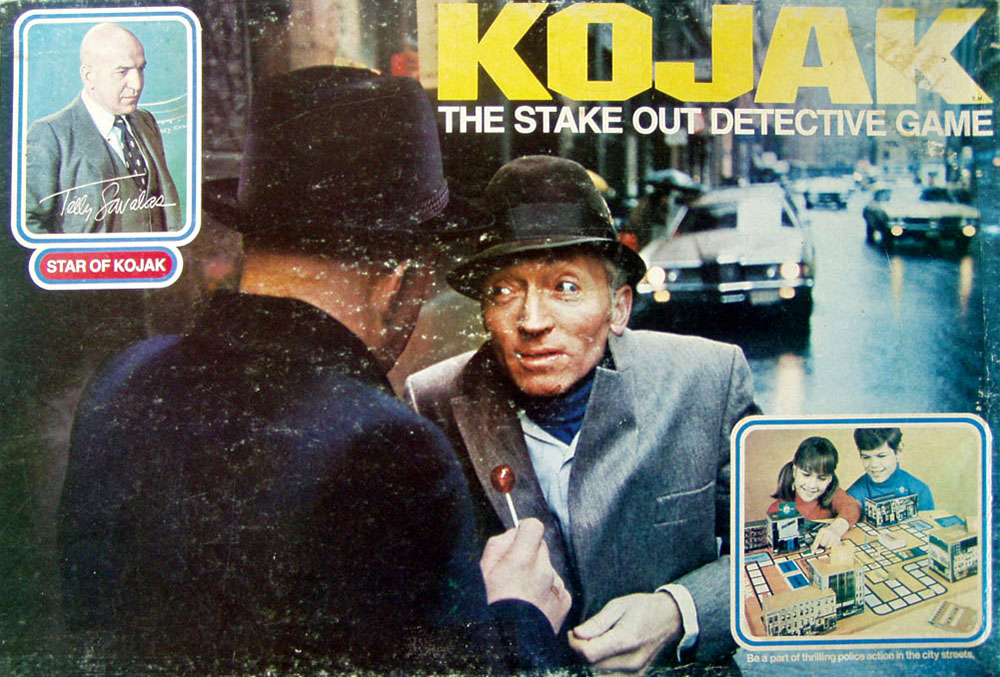 Look at these little kids having a gay old time playing Kojak!  They should be playing the new H.R. Pufnstuf board game, but instead their playing one based on dad’s favorite gritty cop drama. Who loves ya baby? 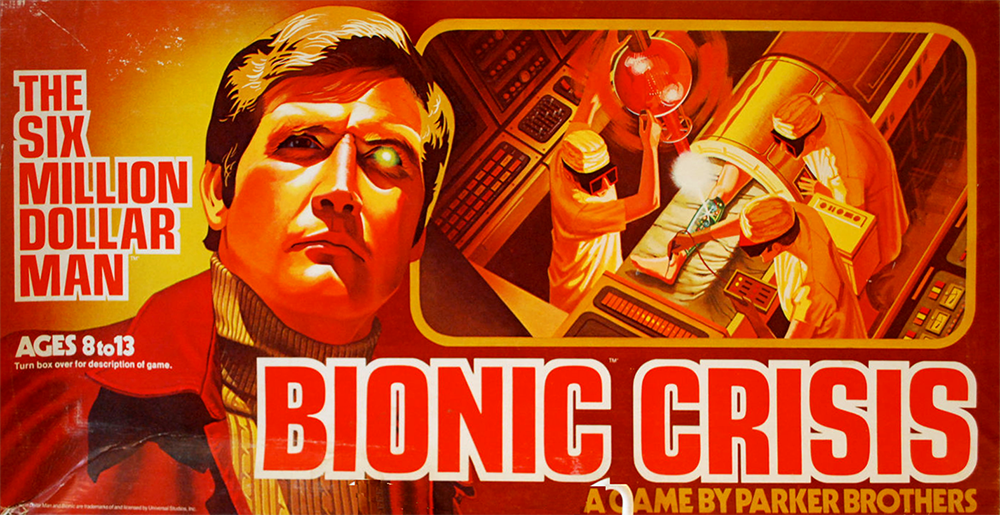 There were a few Six Million Dollar Man games back in the seventies.  This one was similar to Battleship, where you have to guess which holes get a peg and you try to complete a circuit.  Pretty awful to play, but it was the $6M Man, so for seventies kids, it was great fun. 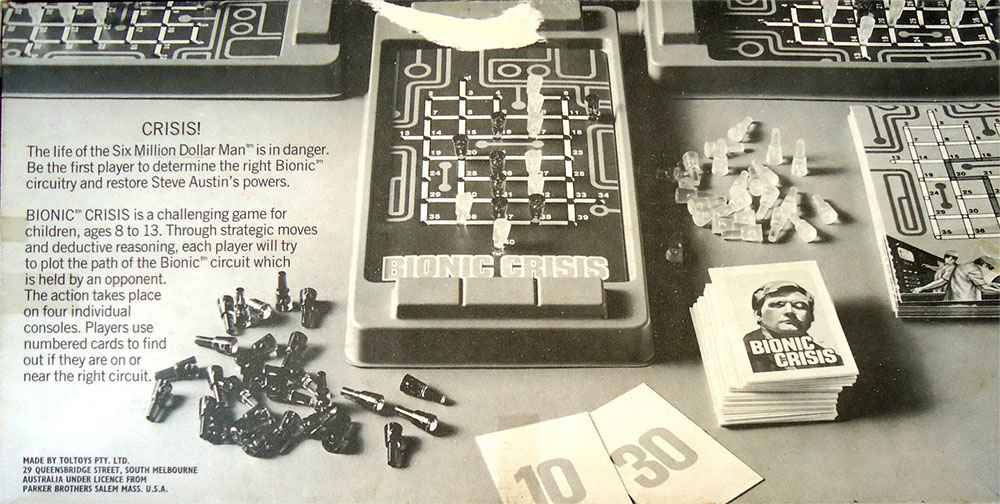 Starsky & Hutch, like Kojak, wasn’t remotely for kids, yet it inexplicably was merchandised like crazy to children.  Go back and watch an old episode; it’s striking how adult-oriented the show was – which is hard to reconcile with the number of grade-school boys with Starsky & Hutch lunchboxes, coloring books, and whatnot. 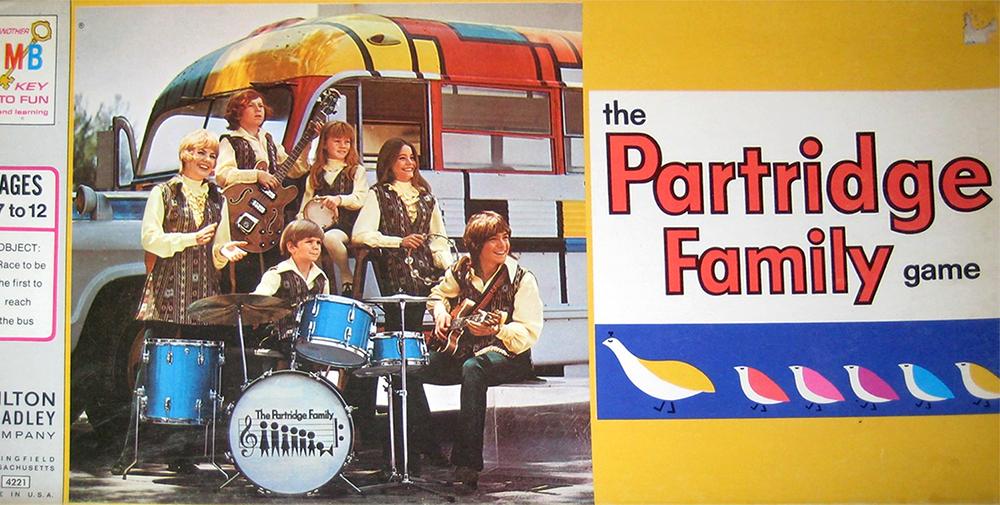 I don’t think I’m going out on a limb to say that Keith Partridge/ David Cassidy was for a few short years, the most marketed teen heart-throb in history.  I can’t think of another name that received such a tidal wave of merchandising.  Lief Garrett, Donny Osmond, brother Shaun Cassidy, John Travolta – none found their face plastered on so many products. 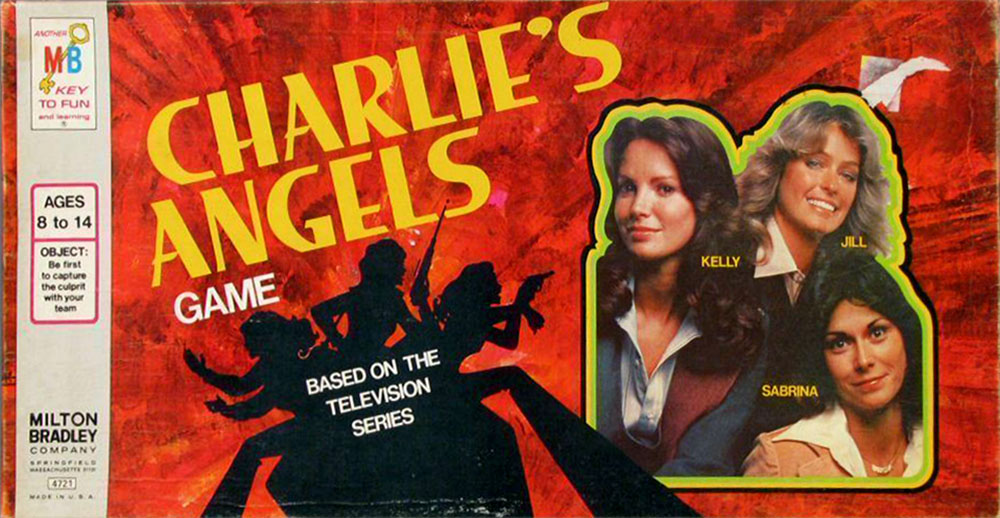 I actually still own this game.  I was going to scan the contents, but the cards and game pieces are so unbelievably dull, I decided against it.  No thought whatsoever was put into this game design; but relying on the Charlie’s Angels brand was all that was needed to wind up in homes across the country. 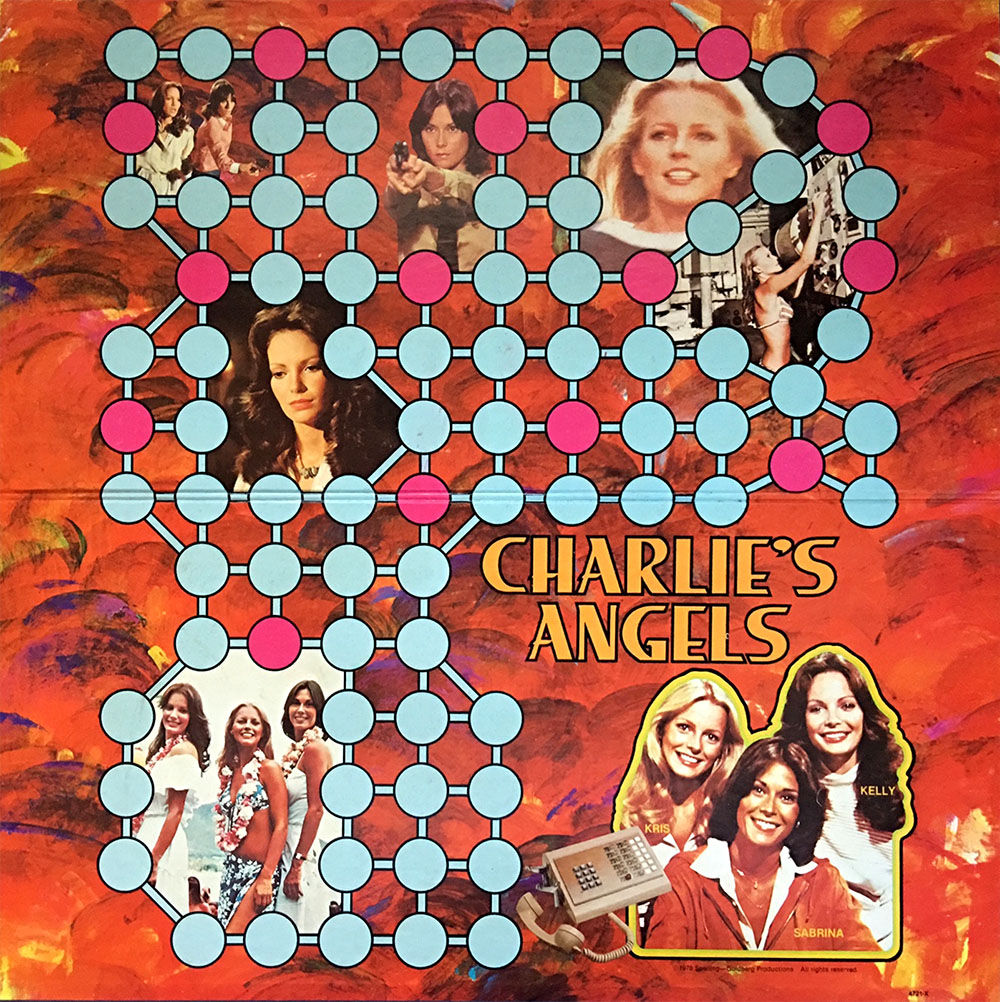 Once Farrah left, they had to do some quick redesign, replacing Jill with Kris.

Kelly, Sabrina, and Kris make up the team of Charlie’s Angels. Charlie’s phone calls give this beautiful squad of crime busters the information needed to capture the target villain. They work as a team, each using her special talents to apprehend the culprit.

Welcome to Fantasy Island! Want to be a Star Ship Captain or a Fashion Model? Maybe a Millionaire? These are just three of the twelve terrific fantasies you can try for. Mr. Roarke and Tattoo will be your hosts…but look out…they’ve got surprises planned. You may set out for Adventure Valley but wind up on Misfortune Mountain! You can be sure you’ll visit all of the island as you race to collect kisses, money and adventure awards you’ll need to make it to the main house and become the winner. It’s a fantasy come true!

1970s kids like me were excited for what the year 1999 would bring: spaceships, aliens, space exploration…. NOT.  It’s a bit of a buzzkill when you look at how overly optimistic we were.  See 16 Tragic Science Fiction Calendar Miscalculations 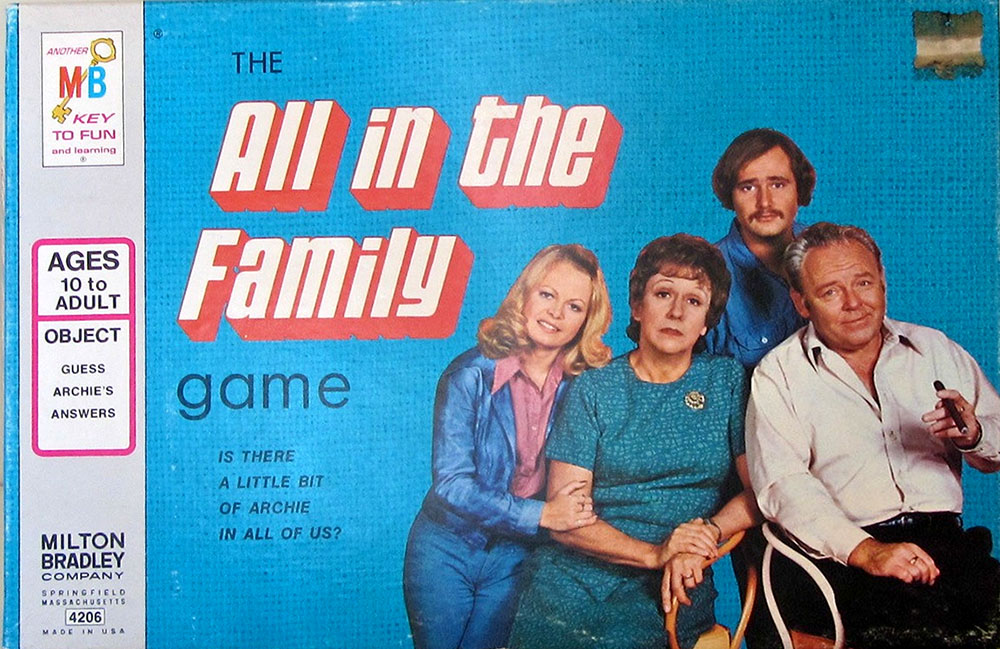 “Is There a Little Bit of Archie In All Of Us?”

This is a great person to person game for young and old. The generation-gap may show up, as “loaded” questions are asked by the “M.C.” and players write their opinions in response. No names are given when the responses (some serious — some humorous) are read off.

The object — match up the response to the person you think most likely to have said it. Oh yes! — Archie’s (or Edith’s) response is put in by the M.C. and you can also score if you guess what he said. You will find some players are so much like Archie (or Edith) that you can’t tell the difference.

Clever or unexpected responses often throw the party into peals of laughter. Animated conversation and real insight into what people are really like results from this hilarious and stimulating ALL IN THE FAMILY game.

“Heey! It’s the Fonz! Can you dig his brand-new game? It’s all about being cool and scoring points for it. When you accumulate enough points on Arnold’s juke box, you win the game.

See, It’s like spendin’ time with the Fonz – you go on dates, challenge other players to drag races, or maybe just cruise down to Arnold’s. But beware, you can lose cool points as easily as you gain them. Hey, Nerd, don’t get caught hangin’ out at home. That would be uncool!”

Happy Days Fonzie’s Real Cool Game is based on the hit 1974-1984 TV show of the same name, the Fonz is hangin’ out at your house. Show him how cool you really are by being the first player to collect 16 cool points and light up Arnold’s juke box. 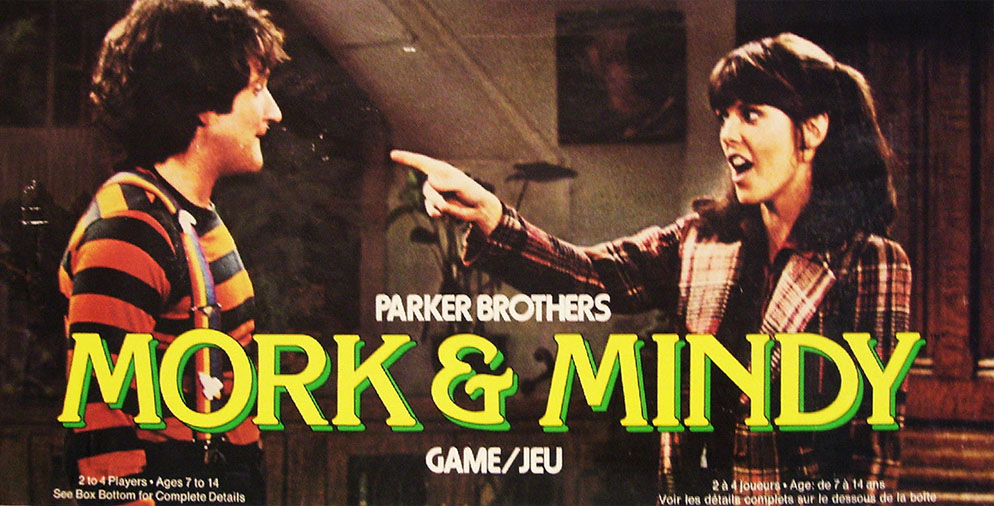 Meet Mork. He’s from Ork, and he’s come to Earth to learn all he can about our planet. To win the hearts of Earthlings everywhere, Mork has brought along this crazy Orkan game. In it, you and your opponents move around a special Orkan board doing such out-of-this world things as “splinking” and “grebbling up.” All the while, you’ll be trying to win coins called Grebbles. But don’t panic. Mork and his Earthling friend Mindy will be there to help. So shake hands Orkan style, and begin!

You can tell the usual Hanna Barbera artists weren’t behind the cover of this board game. 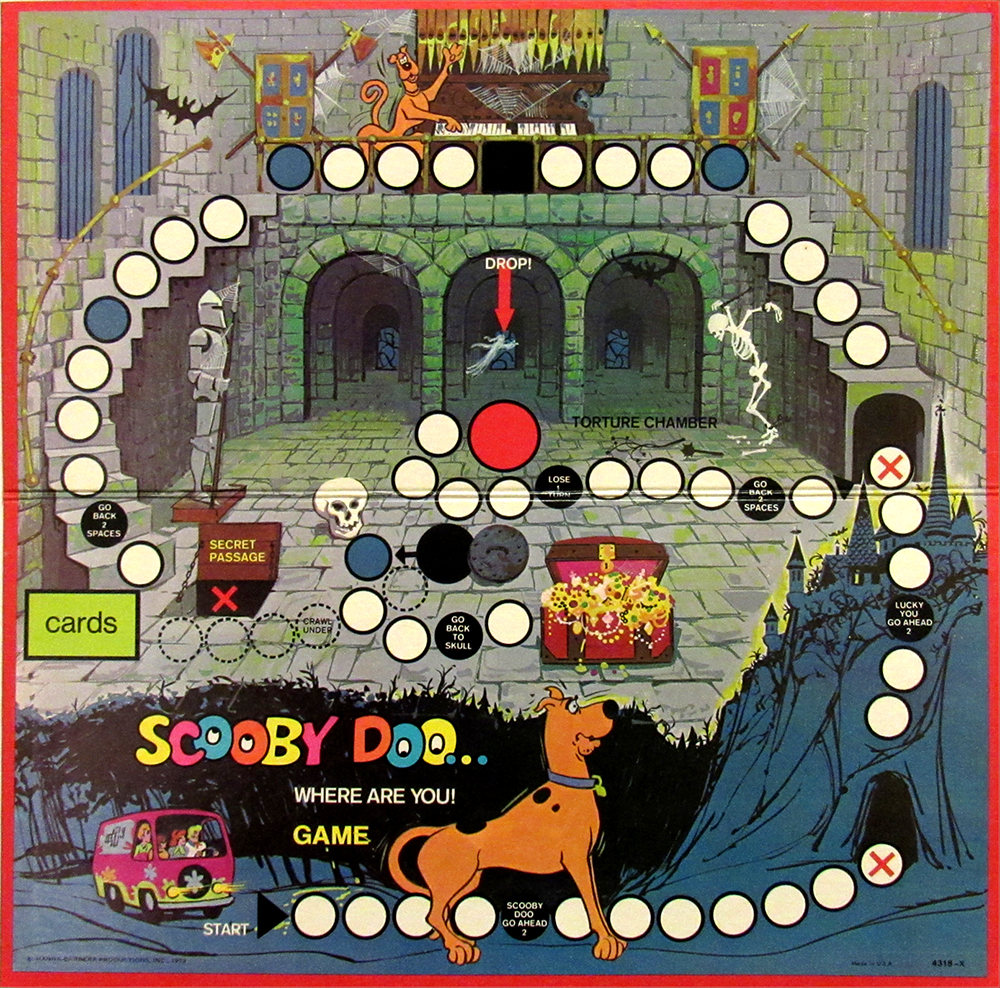 It was a pretty simple game: just spin the wheel and draw your cards, and be the first to get Scooby’s treasure. 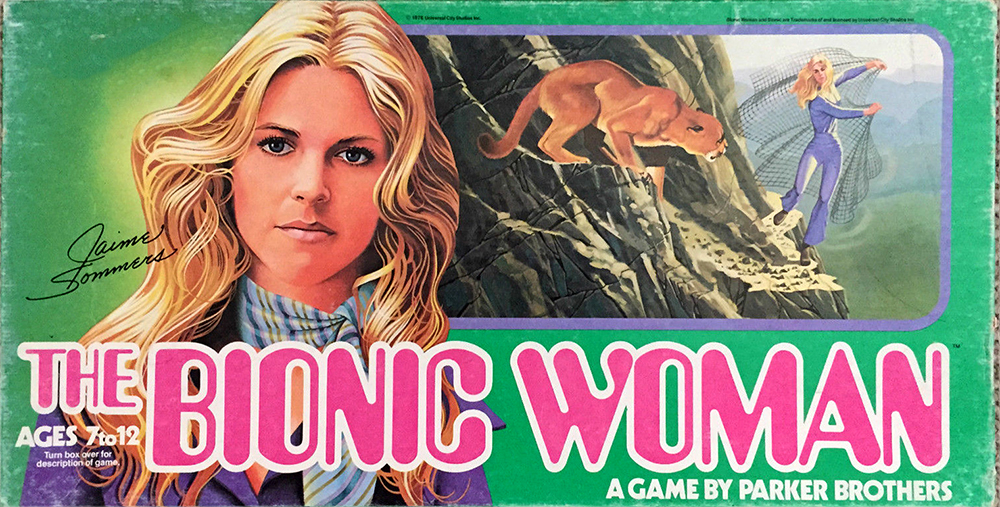 Jaime Sommers, The Bionic Woman, is about to go on assignment and needs your help. Assist her through perilous adventures, including the Top Secret Assignment, and you may win the game. THE BIONIC WOMAN is an intriguing game for up to four children aged 7 through 12. With a combination of luck and strategy each player tries to move through as many assignments as possible. Accumulating points along the way Steve Austin may add a surprise assist at any time, and there’s always the Special Assignments and the final Top Secret Assignment to work toward. The action is fast-paced and full of suspense. Players race around the board, accumulating points by completing assignments. But there’s always the chance that an error in judgment will result in a loss, making the final outcome a surprise until the last minute. 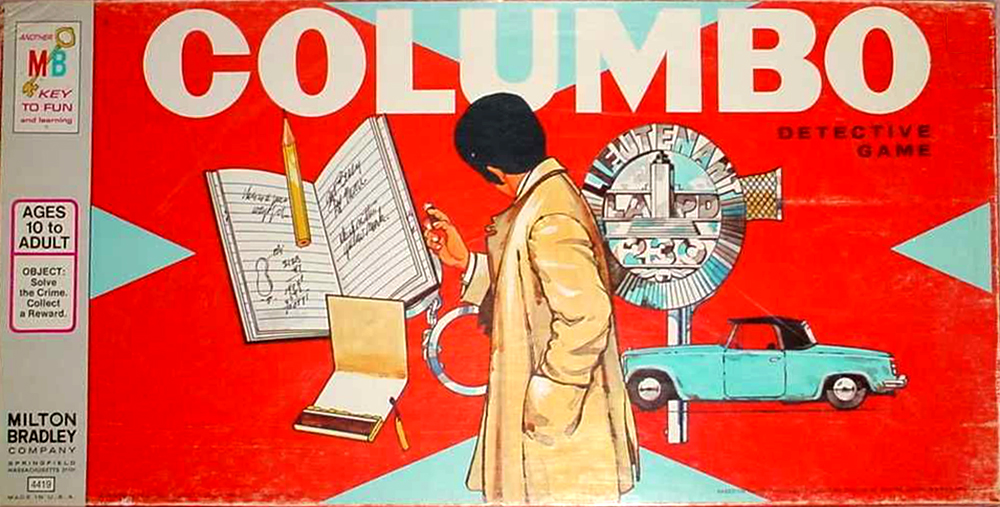 Milton Bradley and Parker Brothers would often just take a previous game and reboot it with a TV show theme.  For instance, the Columbo game was previously a game called “WHY?”.  The game play remained unchanged, but now with a Columbo brand.

“From the popular TV show”… so popular it only lasted a season.  The show was about a family that escapes the rat race of big city life and goes “back to the basics” moving to the country and operating a grist mill.  Starred Ronny Cox, right after his role in Deliverance.  Quite an odd choice of a board game… but, as I said, anything on the boob tube was fair game in the 1970s.