“I humbly invite you to take a stroll through my life in the squatter community of the Lower East Side (LES) in the 1990s,” writes Ash Thayer, whose book, Kill City, focuses on New York City squatters, harking back to another age, when city’s were not being made overly safe, libraries were valued and open – those arcane places where you could sit indoors for free without paying money and read – when the welfare state was not run on grandiose corporate business lines, when being young, hedonistic and utterly lacking in ambition were joyous and the city-centre living was open to all. It’s a halcyon vision of full-figured youth and fun, albeit one obscured by voracious rats and the occasional nutter, and for freezing cold months at a time shrouded in clouds of visible breath.

“Take note, that I can only be a guide to my New York. The photographs reflect the people who made up my particular tribe and the sanctuary I found with them. The LES was a very different neighborhood during the 90s than it is now. And it was a different universe then compared to what it was like back in the 70s or 80s, ask Frank Morales (who has generously contributed the introduction to this book) and other locals can attest. 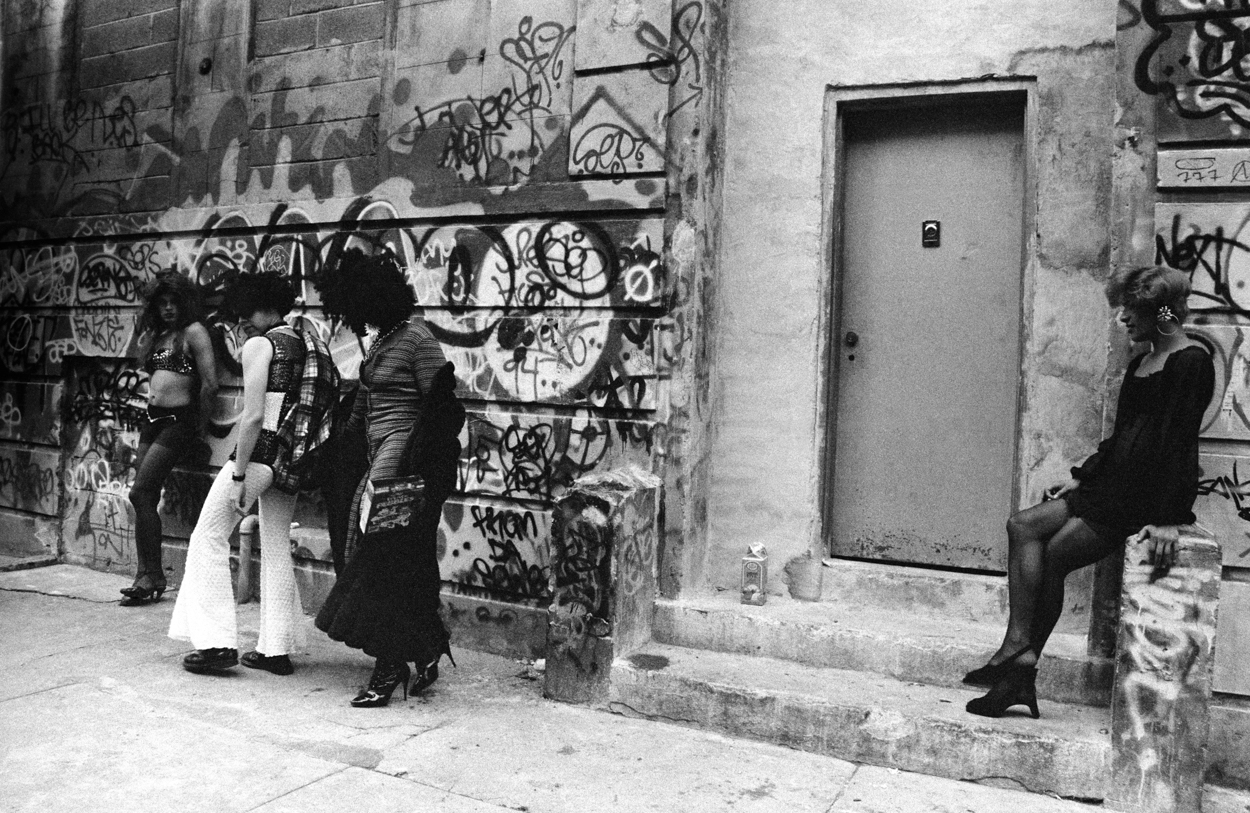 In the 1970s, a massive downturn famously brought New York City close to bankruptcy. Landlords failed to pay property taxes and abandoned their buildings, even some still occupied by tenants. Some owners took further measures and burned buildings for insurance payouts. Empty lots quickly turned into homeless encampments and drug use and crime rates soared.
The waiting list for low-income housing at the time was at least ten years and the shelters overflowed New York winters put the homeless sleeping on the street—an estimated 30,000 at the time—at risk of death from hypothermia while at the same time, hundreds of buildings throughout the city sat vacant. 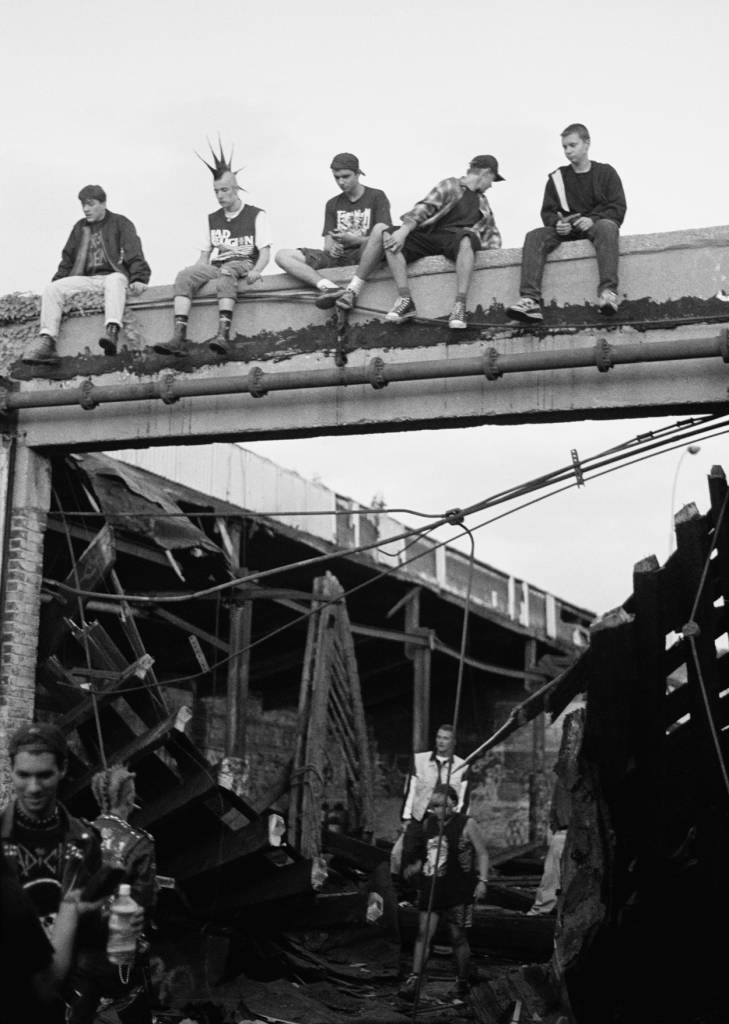 Between 1980 and 1986 New York City took part in a federal homesteading program started by Jimmy Carter to help residents rehabilitate landlord-abandoned buildings and acquire the titles to the buildings. When the program was ended in the Reagan era, on a federal and local level, the need for housing was still growing. Housing activists decided to persevere, especially as New York’s City Hall seemed apathetic to the housing crisis at hand. Over two dozen barely habitable abandoned buildings on the Lower East Side were occupied by people who hoped to acquire title once they brought them up to code. For some buildings it was a race against the clock, but by the mid 90s, these squatters often stopped evictions in court using the law of adverse possession.

So how does a middle class Memphis girl like me end up in this fringe community?

In grade school I was a target for abuse by a trio of evil-Disney-dimpled-redneck-princesses. I was a sensitive, pale, freckled, ginger, and easy to pick on. These girls had the right label of expensive clothes; I did not. They got attention from boys; I did not. I was a smart kid, and a competitive gymnast until I was 14, but depression and self-loathing from their ceaseless tormenting sabotaged me. I became a target for other bullies, including boys, and I was too ashamed to tell my parents anything. I was sure that would only make things worse.
In eighth grade a new girl arrived and I finally had a best friend. Together, we dared to hang out with older kids who saw our reject status as a badge of honor. They could get booze, dealt drugs, and would help sneak us into clubs. I was a good student during the day and a rager at night. I ended up leaving my parents’ house before I graduated, and opted to move in with a bunch of punk rock girls. I shared a room and a single bed and learned about DIY (do-it-your-fucking-self) culture, anarchism, atheism, straight edge, and hard core. I was listening to Bad Brains, Minor Threat, Bikini Kill, John Zorn, Crass, Fugazi, The Cro-Mags, Patti Smith, The Specials, Hole, The Clash, Black Flag, Sex Pistols, The Slits, Dead Kennedys, Joan Jett, Motorhead, Die Kreuzen, The Damned, and The Misfits. Also, our local Memphis bands: Man With Gun Lives Here, Taint Skins, Cop Out, FMD, and Pistol Whipped. 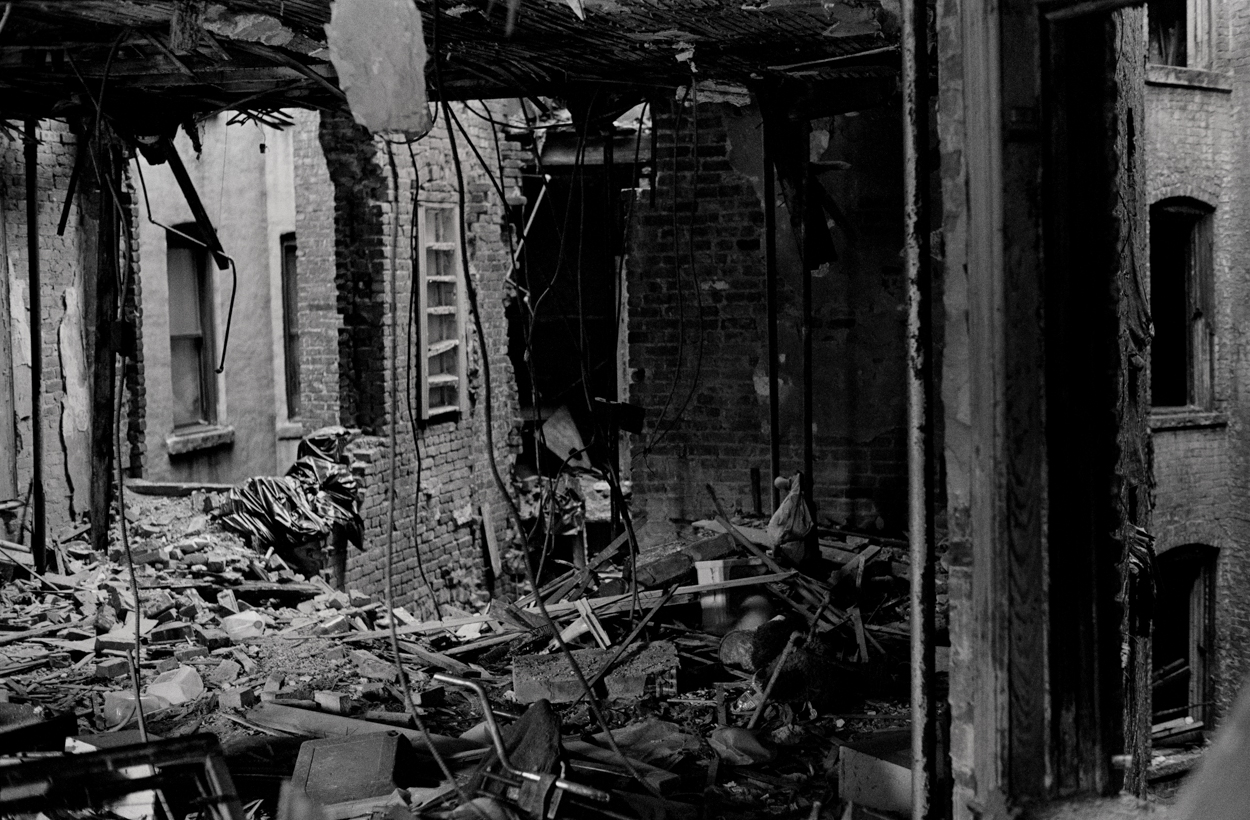 The punk girls didn’t give two shits about looking sexy, wearing respectable clothes, or fawning over guys. We died our hair crazy colors, and cut or shaved it in disheveled and nonsensical ways. If there was any sense of competition, it was about who could say fuck you the loudest with their appearance. Fuck me? Well, fuck you first! God, it felt so good to stop trying to fit in. The punk community taught me that I could take the pain and rage I felt and do something productive with it, involving social activism, music, and artistic expression.

In 1992, I moved to New York City to attend The School of Visual Arts. I found a railroad apartment on the Upper East Side with a rotating group of other teens, but we couldn’t afford rent after just six months. I had a partial scholarship and was living on student loans so I moved to Brooklyn briefly, but after being booted from there I truly had no place to go. On the verge of dropping out of school because I couldn’t afford tuition and rent, I shared my situation with a young local punk guy, Brett, who I’d met in Tompkins Square Park and at punk shows. He offered me a place to stay in his building, which he referred to as a squat. I had never heard the term before, but once I found out what it meant, I was in! 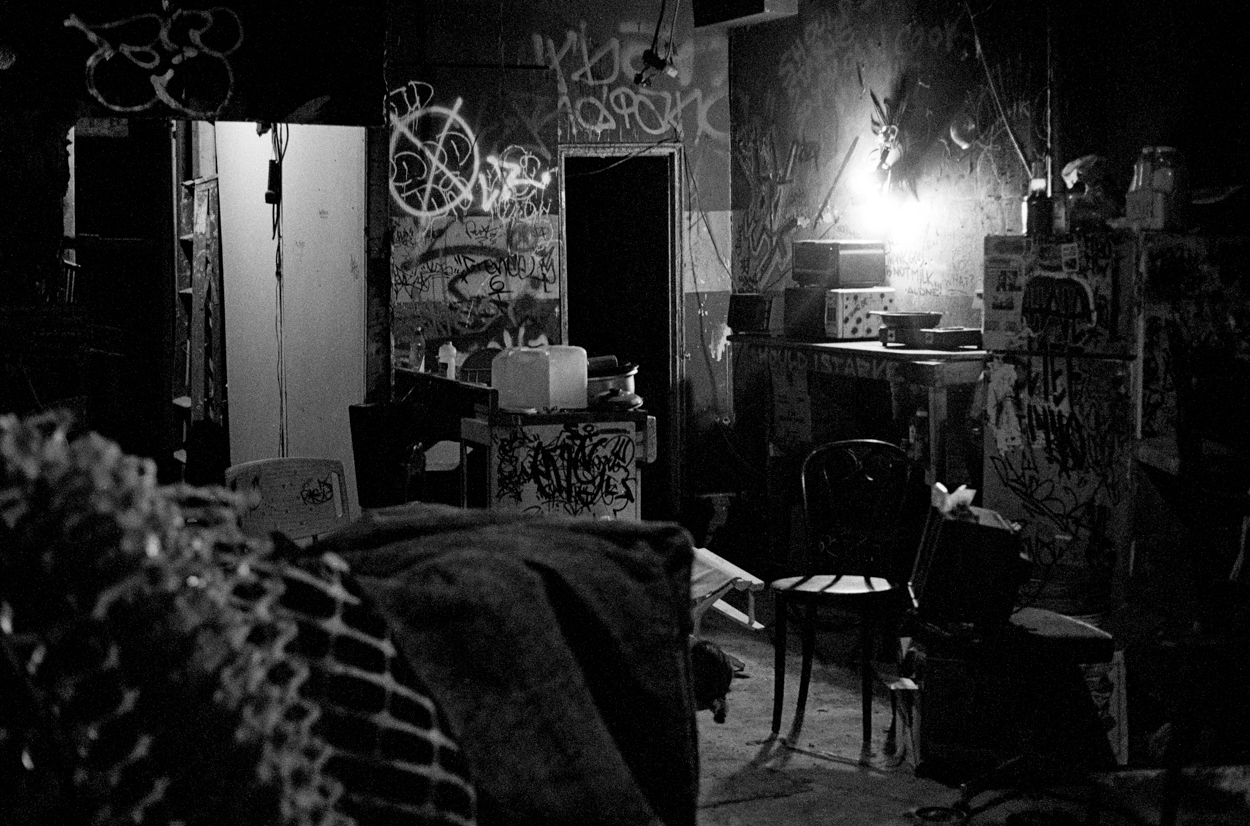 This was See Skwat. The building was dark inside, electricity was minimal, and it had no running water. Officially, it was unfit for habitation. It was owned by the city, and had been left unused and decaying for over 15 years. Some makeshift apartments were missing floors, walls, and ceilings. Residents had already replaced the stairs between several floors. People could find almost all the materials necessary to rebuild their apartments in the garbage: studs, drywall, flooring, and insulation. What they couldn’t find they paid for themselves with money they earned at the same kinds of part time jobs that I found during this time: I waitressed, was a bicycle messenger, a hired hand at an all female moving company, and even did some general construction work. Living at See Skwat, I got to know squatters at the other buildings throughout the Lower East Side. We worked on our buildings during the day and partied at night. There were group construction projects, community room potlucks, and notorious concerts in the basement. We participated in community activities and board meetings, as well as demonstrations and protests for fair housing regulations for all New York City residents. When we couldn’t afford to buy food we would dumpster dive and emerge with barely expired produce, bags of stale bagels, anything we could get our hands on. You just had to not give a shit when regular people gave you strange looks. If you were young, white, not covered in piss-stained clothes or drooling on yourself, and observed digging in the garbage, it really seemed to disturb passers-by. 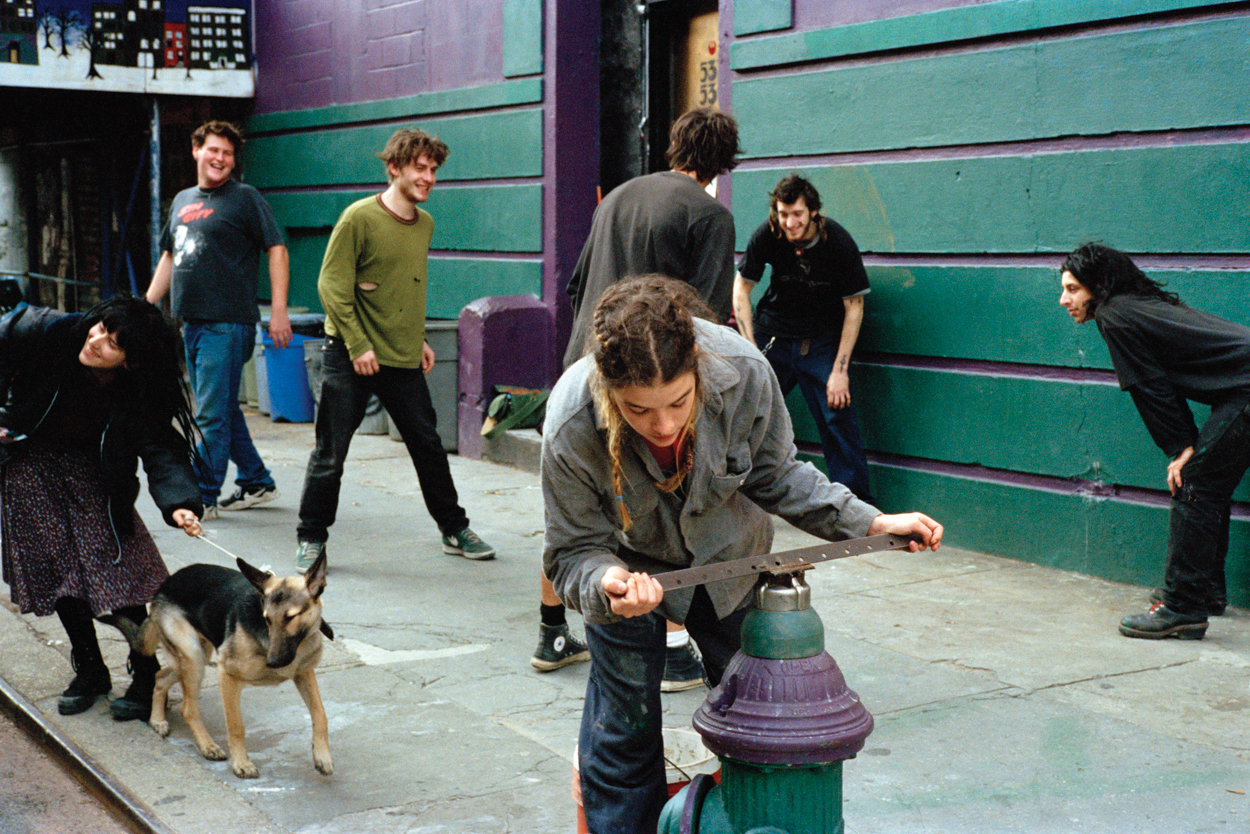 After bouncing in and out of another apartment, I moved into Fifth Street Squat and started taking more pictures of the people around me. I found the environment fascinating and the people beautiful and intriguing. I had no interest in the typical art student subjects and I sure didn’t want to shoot fashion, advertising, or anything I thought would support corporate America.
In my last year of school I moved into Serenity House. This apartment had some running water and electricity. There were more families in this building including four little girls, all about three to four years old. 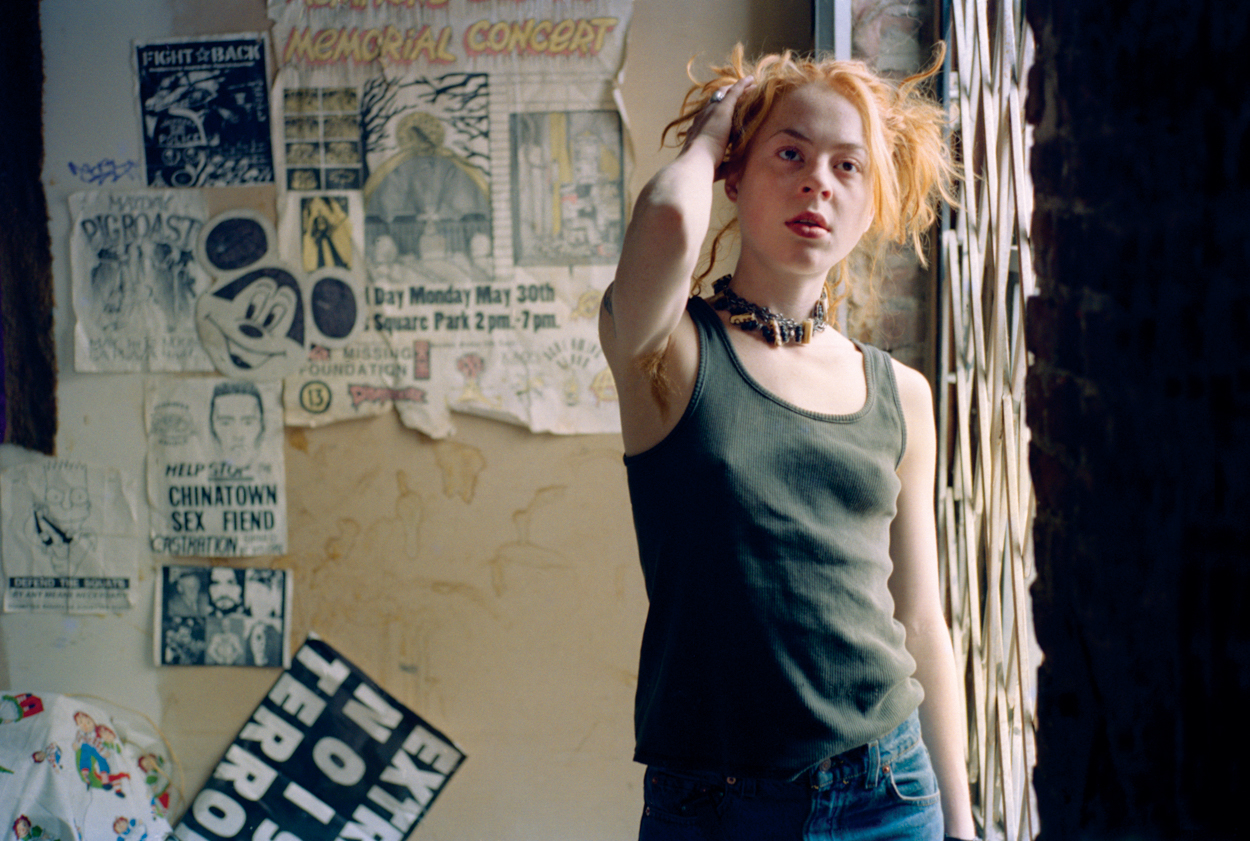 During my time around the squats there were several devastating evictions: Glasshouse, the five buildings the made up Thirteenth Street Squat, Fifth Street Squat, and Dos Blockos. We all, as a community, and with support with some of our neighbors, fought like hell to keep them. I had a front row seats from which to observe the ways the media selectively covered our stories and events, leaving out crucial information and falsifying our history. 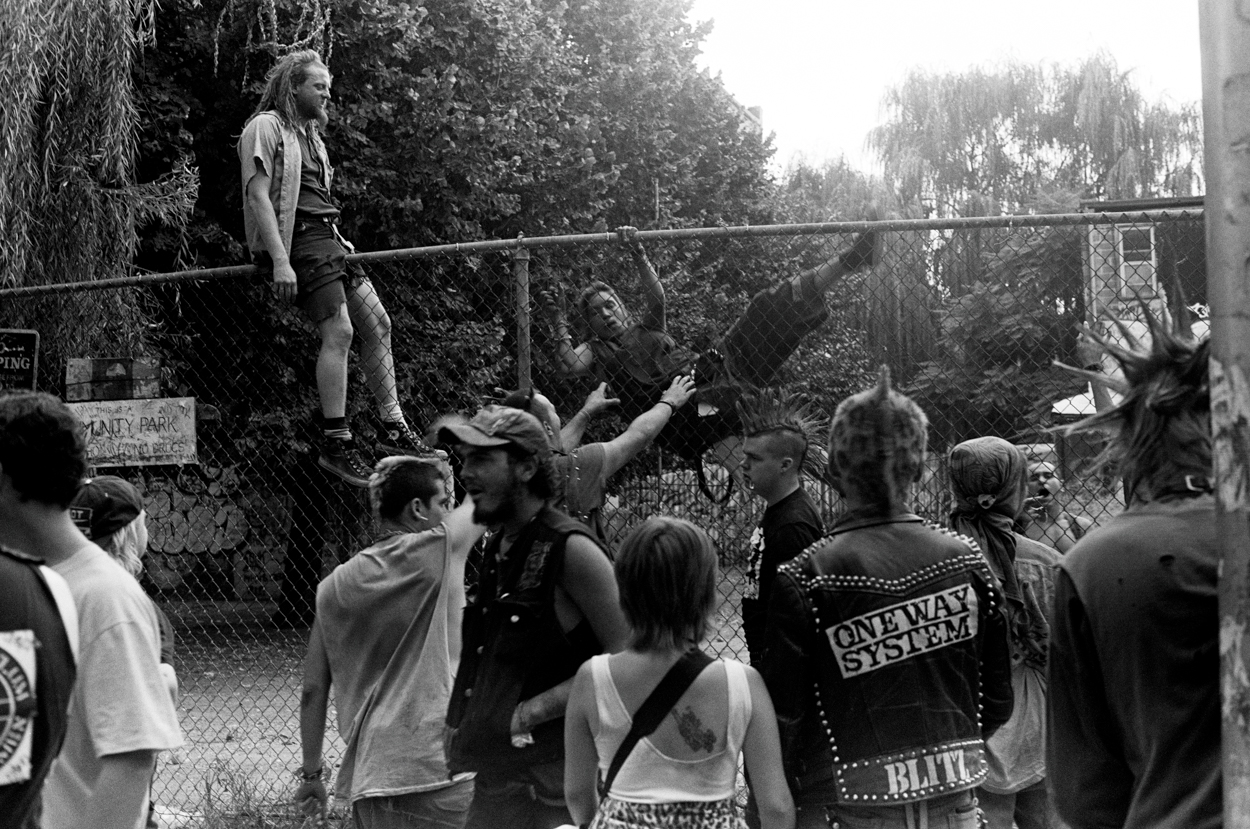 In 2000, the majority of the eleven remaining squats, (including See Skwat) started a process with City Hall, converting them into limited equity co-ops. Although the court’s decision and how it was carried out was complicated and nuanced, it was widely seen as a victory for the squatters. However, the era of squatting on the Lower East Side as we had known it was forever changed. 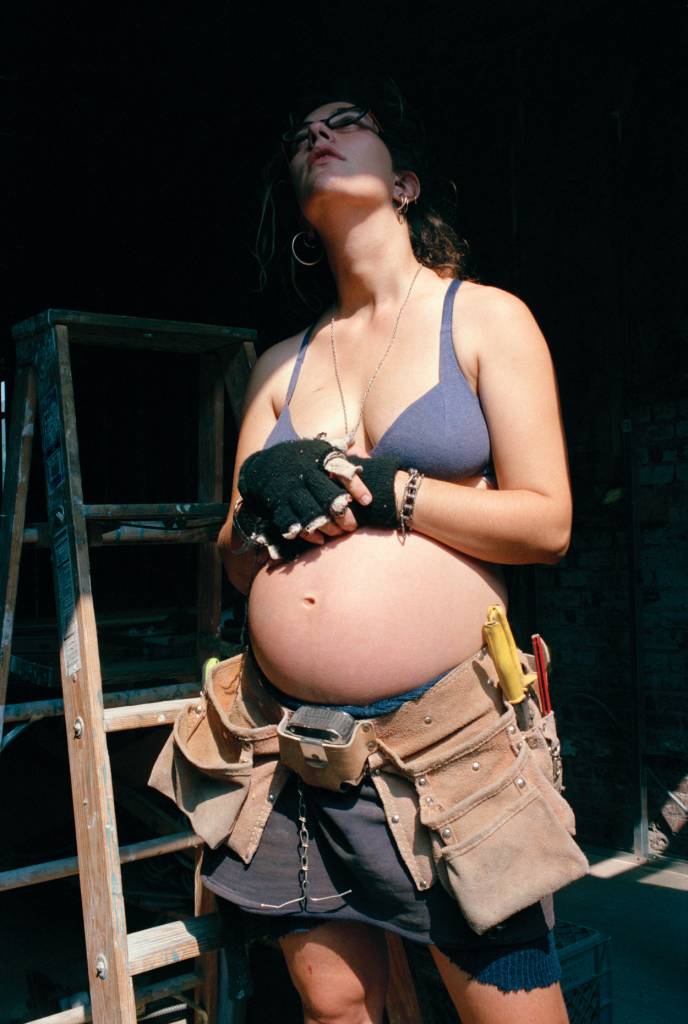 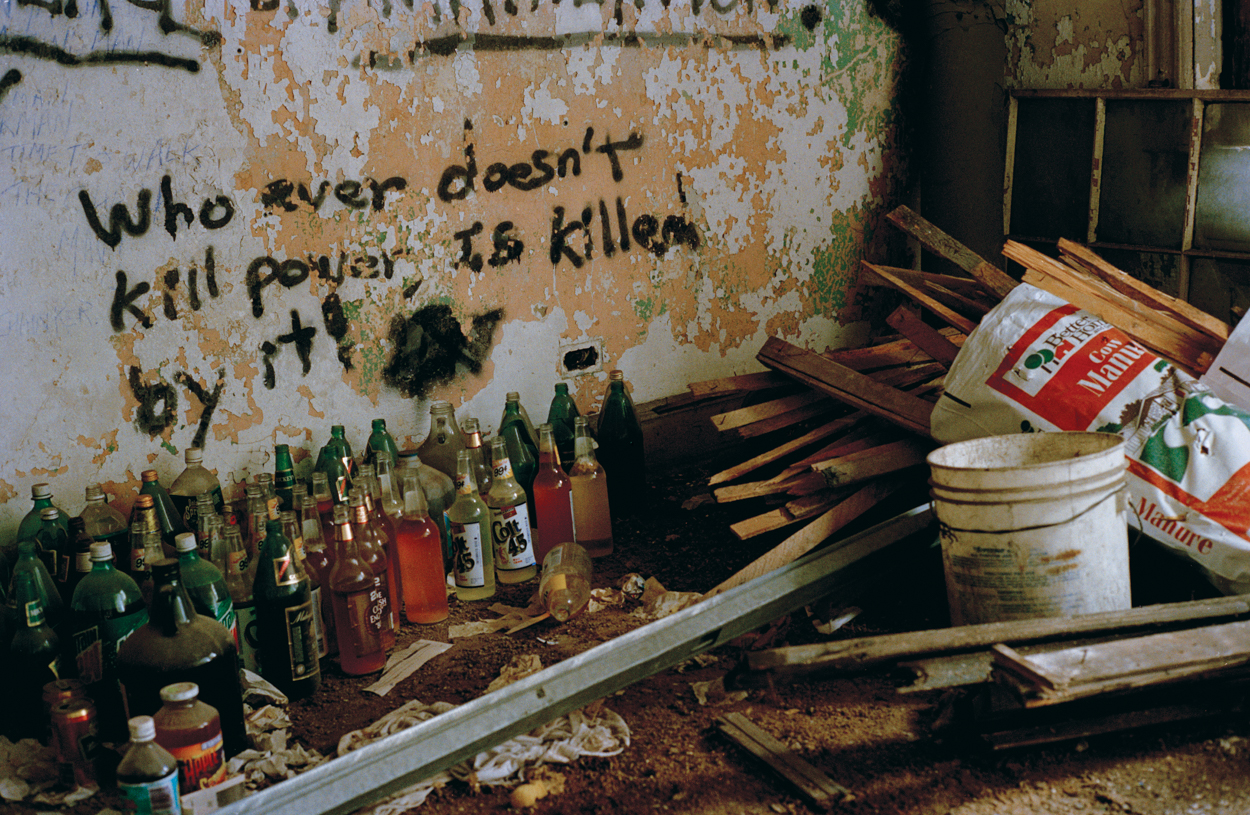 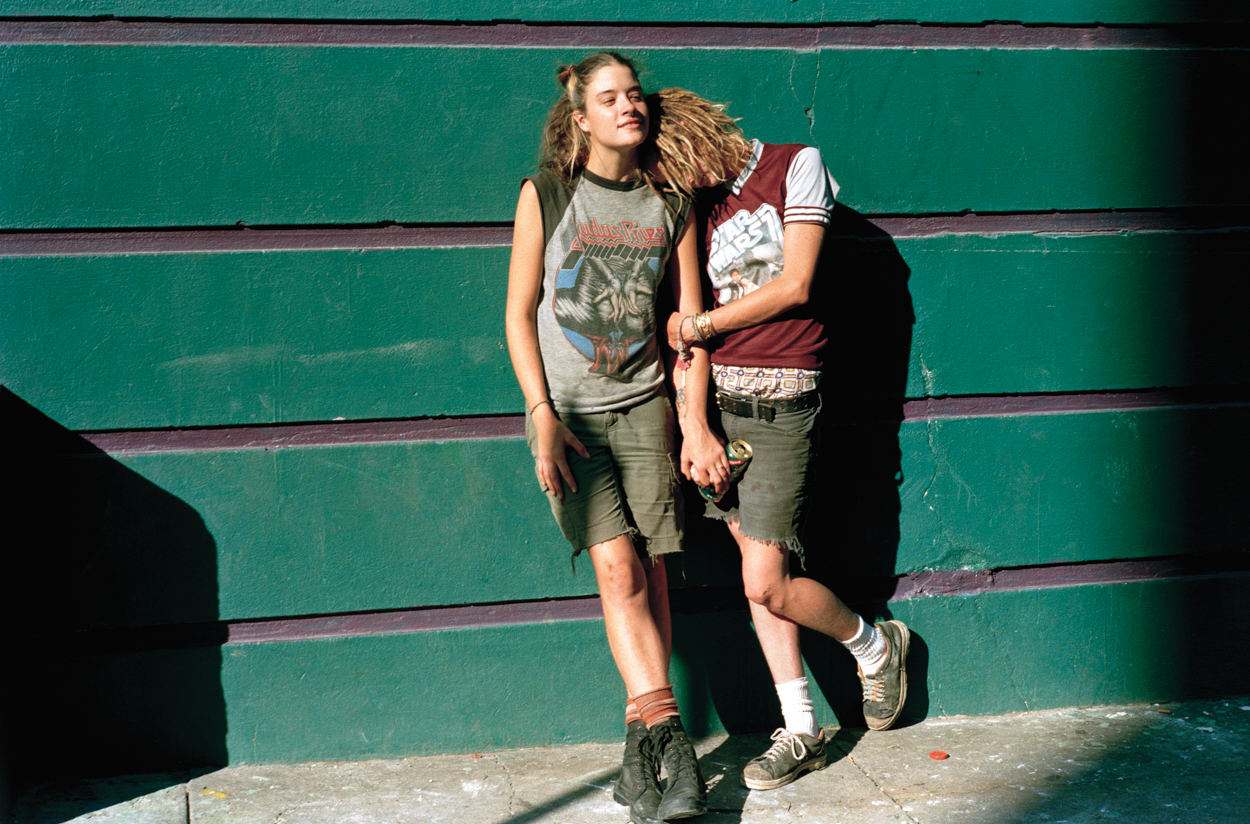 Meggin and Jill Leaning on the Front of Fifth Street Squat, 1996 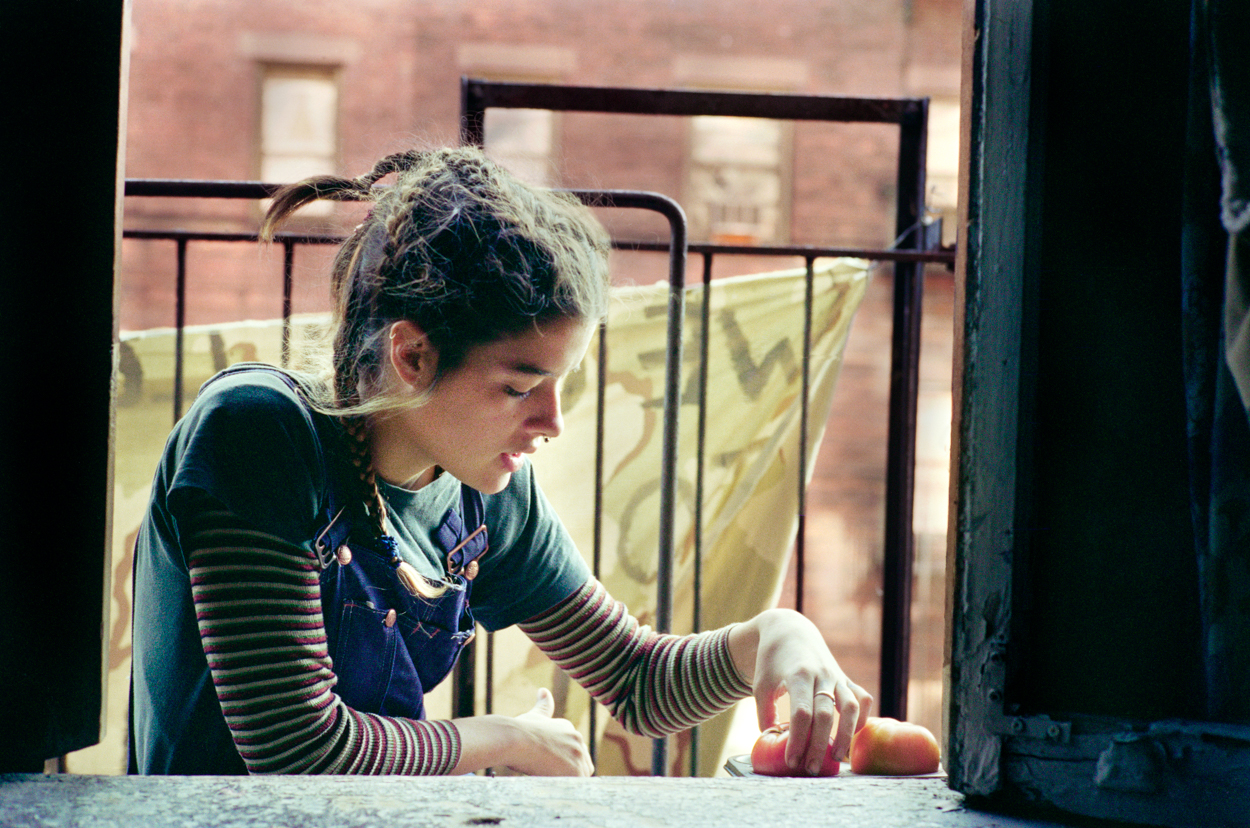 To say that my time squatting in New York was formative is an understatement. Although it was, at times, a wild scene and full of imperfect people, including myself, it taught me so many valuable skills: construction, community organizing, and above all independence. My ability to trust my instincts and stay true to my beliefs, regardless of what others might think, was strengthened. Together, my fellow squatters and I crafted a life out of New York City’s throwaways. 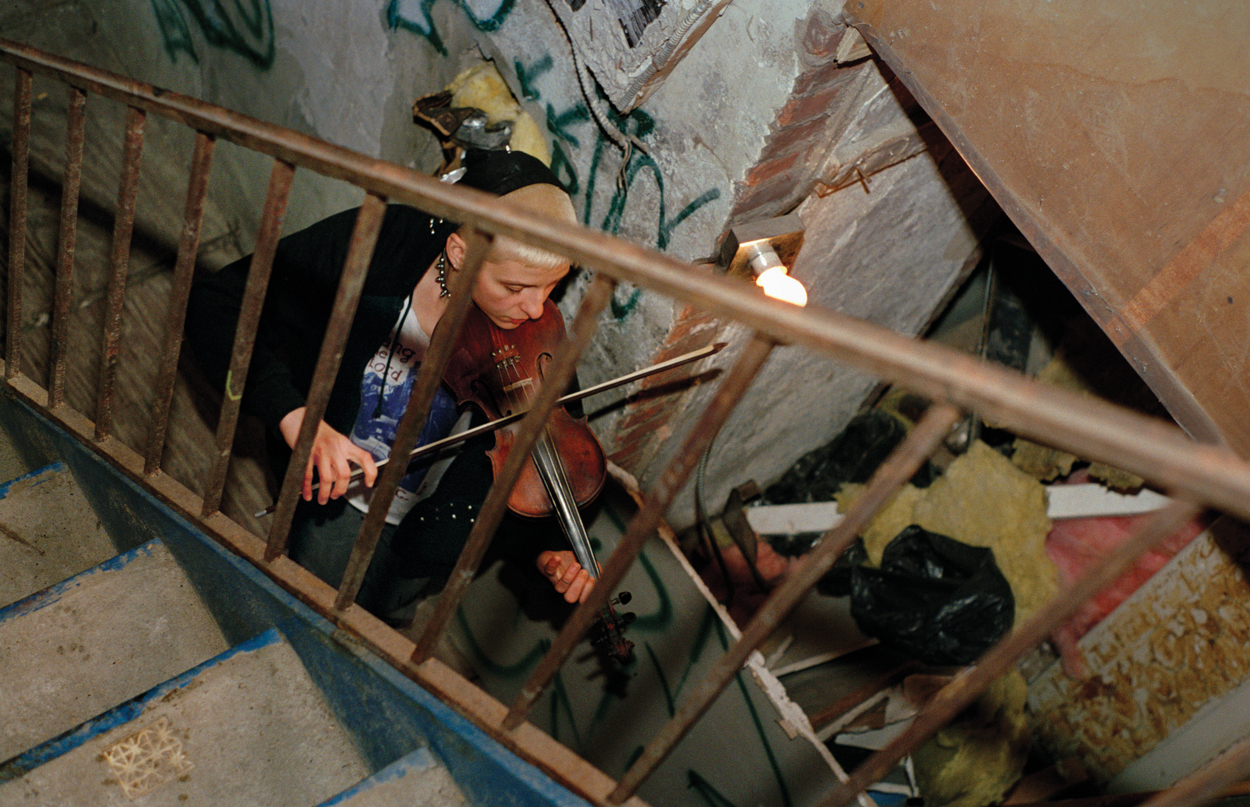 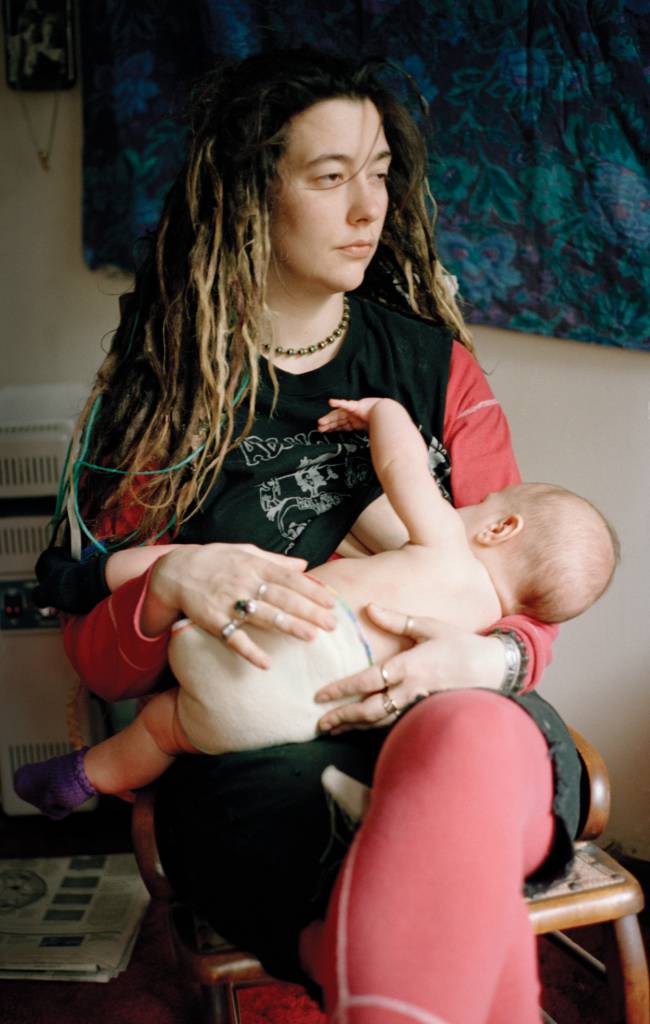 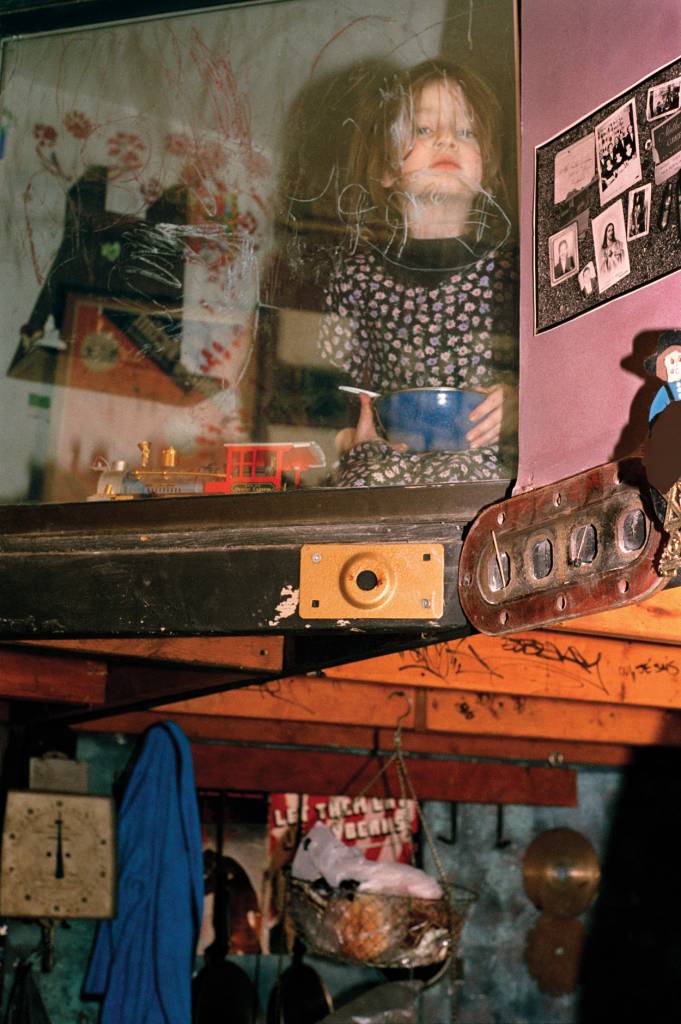 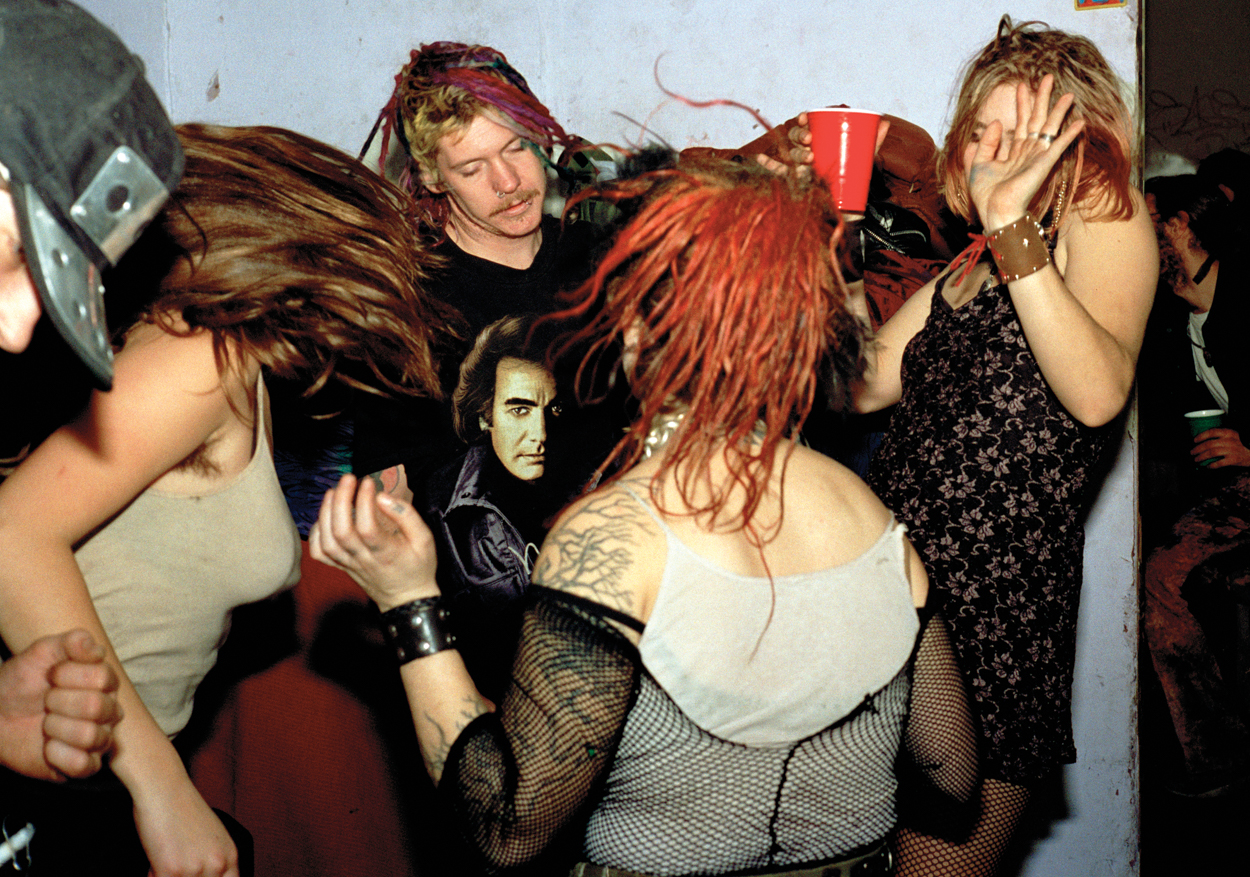 You can catch up with Ash Thayer on her website. – and buy her great book, Kill City, here. 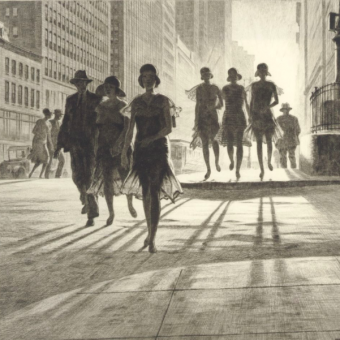