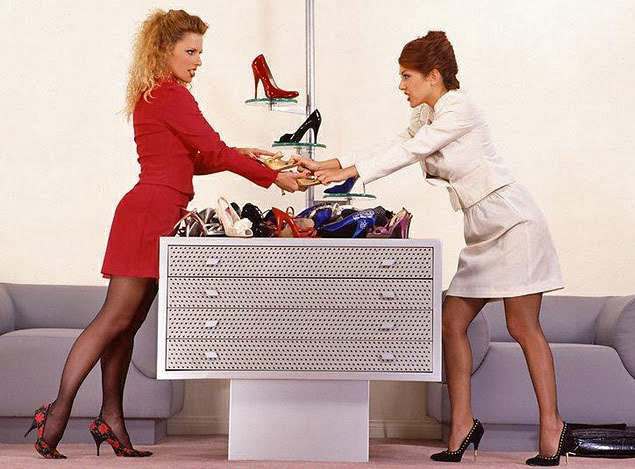 LADIES – no need to fight.  There are shoes aplenty in this article, so there are more than enough for the both of you.  Here is a cornucopia of retro footwear adverts that should keep everyone satisfied for a while. From hippy clogs to funky sidewinders fit for the most stylish of 70s pimps, they’re all here. Some of the advertisements are blatantly sexist, some are just plain odd, but there is much fun to be had. Enjoy! 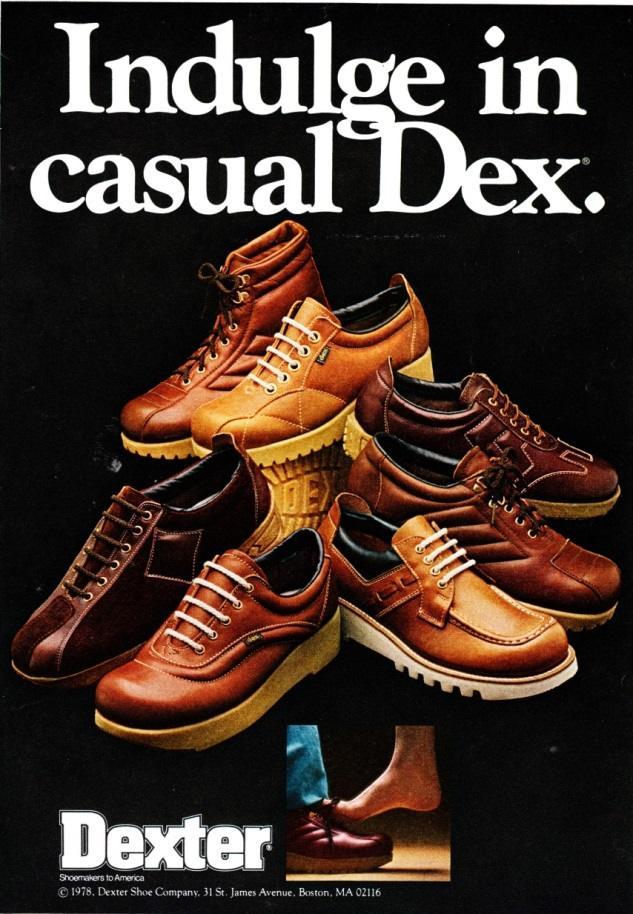 Each Dexter shoe comes with a hotel coupon and a free condom. Plus, the shoes are highly durable and waterproof in case you’re going to move on from Casual Dex to Fetish Dex. 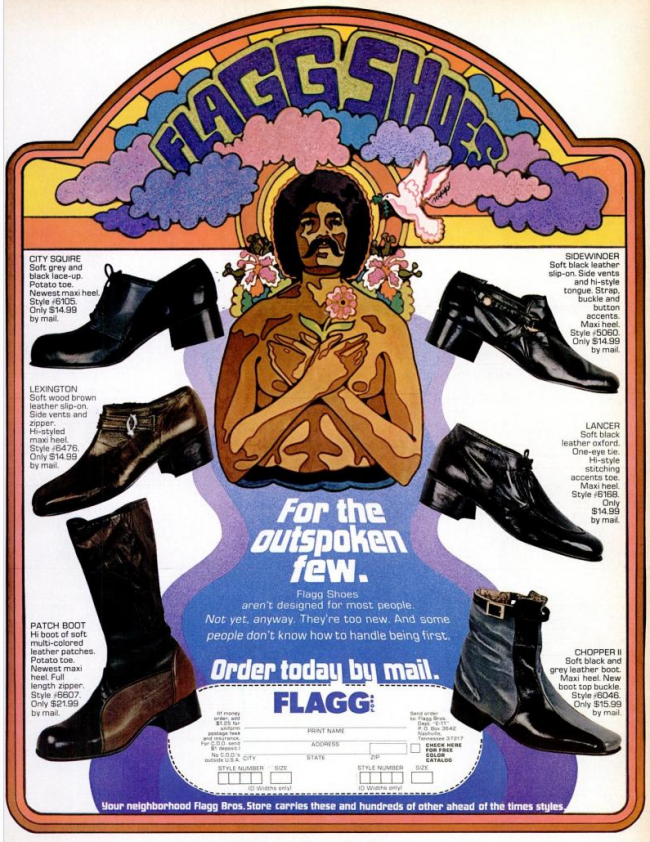 For much of the Seventies, no brand embodied the Black Power philosophy as much as Flagg Brothers and Eleganza. They offered the very best in pimpwear – I’m talkin’ ermine collars, big ass heels and pearl handle canes. African-American fashions were bold and flamboyant during this decade – if the jive-turkeys didn’t like it, they could kiss their black ass. 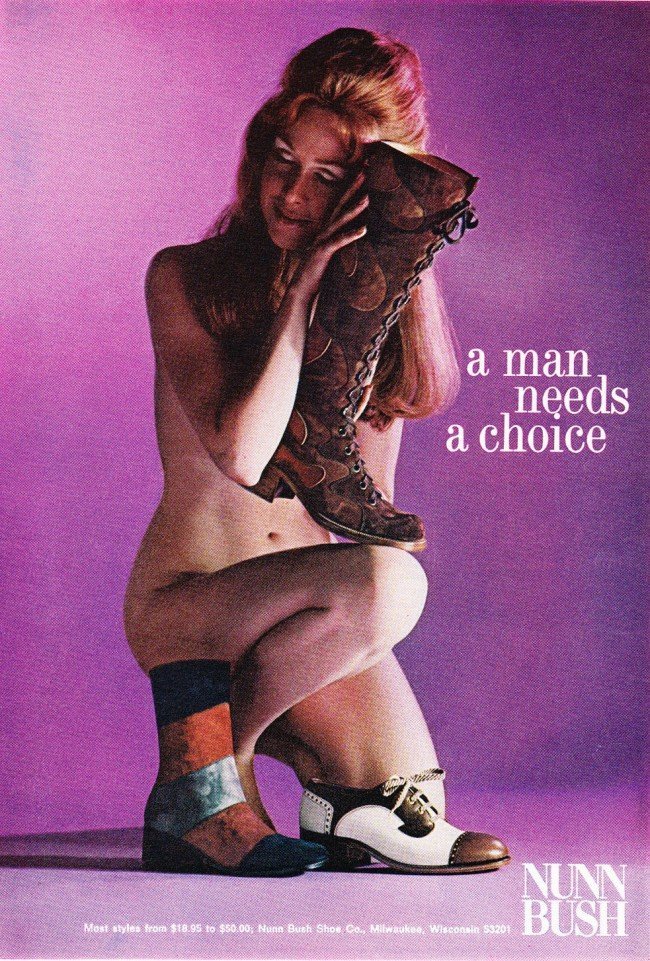 A completely nude woman hopelessly in love with a guy’s shoes. Is this advert pure genius, or pure sexist? I’d posit that it’s a lot of both. 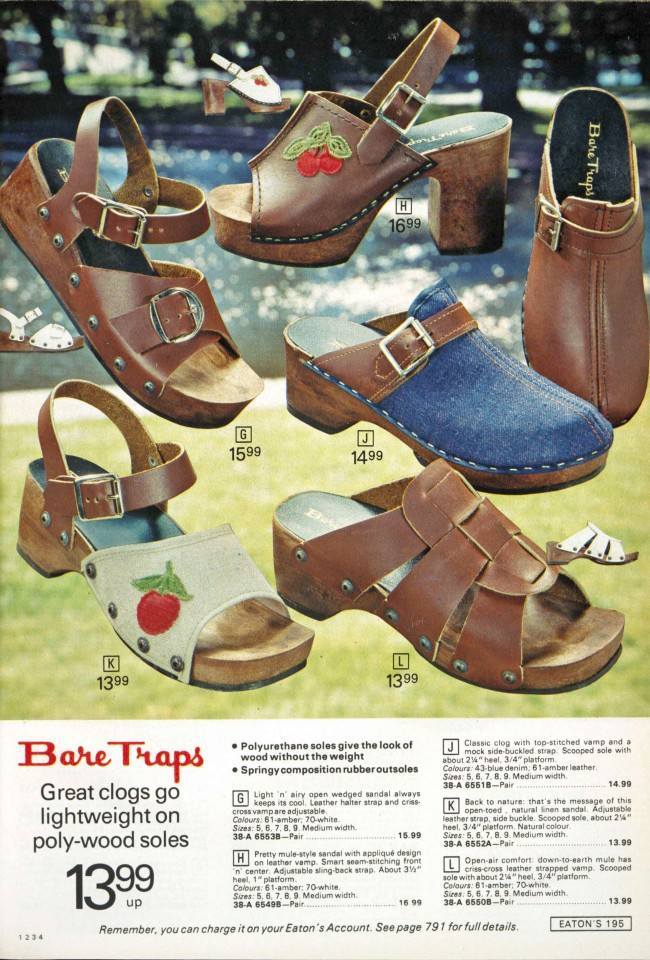 It’s become a cliché to say that fashion is circular, but it is absolutely true. The 1970s clogs above would have been absolutely mocked and ridiculed in the 80s and 90s. In 1986, you would have been stoned to death and your entirely family imprisoned for sliding into a platform mule. Today, it’s the entirely fashionable…. although, embroidered fruit still hasn’t made a comeback. In due time. 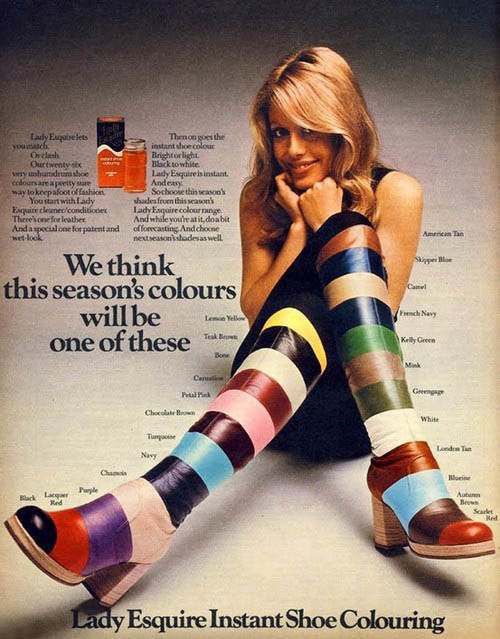 At first this just seems incredibly odd; however, I guess there are stranger things than choosing to paint your shoes. Apparently, they even had “animal textures” – for instance, you could spray on lizard skin. (And at that point, I would start to question your mental condition.) 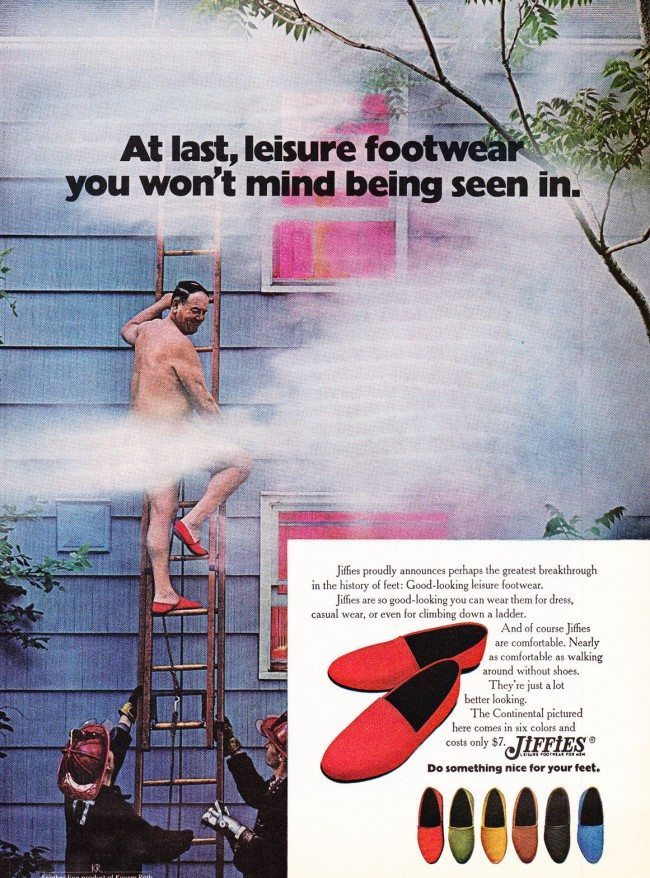 Amazingly, someone along the way thought having a nude middle-aged man on a ladder was a good way to sell slippers. But, before you start feeling too sorry for yourself for being subjected to this – just think about what a view those poor firemen are getting! 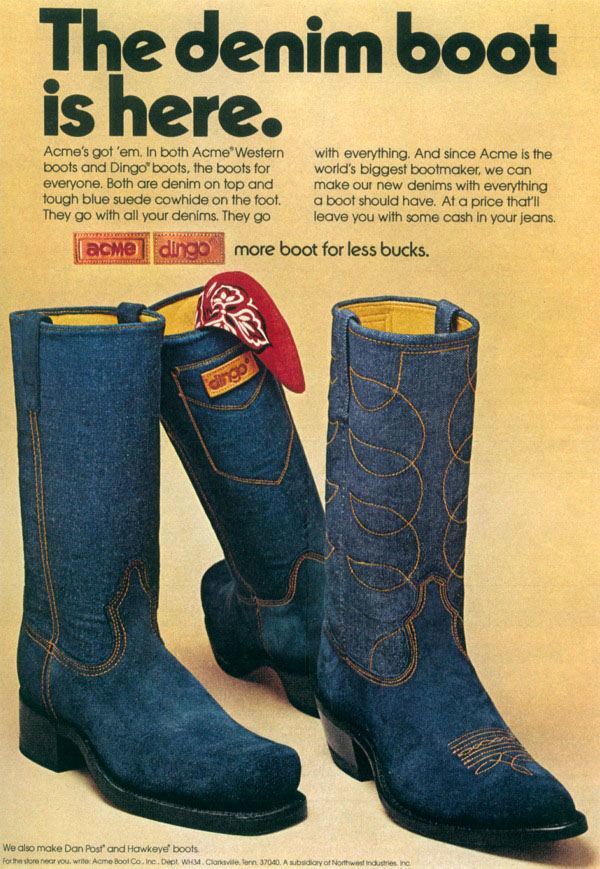 Very few people know this, but it’s a fact that Nostradamus actually predicted the arrival of the denim boot.

In the land with a climate opposite to Babylon there will be great shedding of blood.
Heaven will seem unjust both on land and sea and in the air.
Sects, famine, kingdoms, denim boots, plagues, and confusion shall rule the Earth.
– Century I, Quatrain 55

What significance it has remains to be seen, but the mysterious denim boot will no doubt play a major role in the apocalypse. 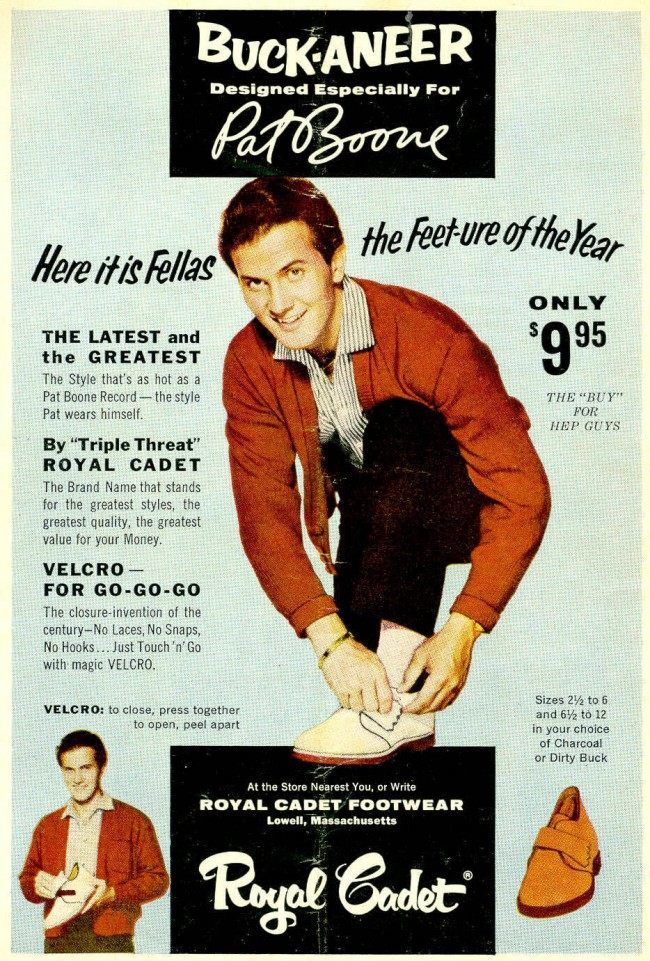 It says the footwear was designed especially for Pat Boone. I’m assuming that means it will never become unclean and remain for all time as pure as the wind driven snow. In this advert, Pat demonstrates the magic of Velcro – “the closure invention of the century”. There’s even directions for proper Velcro use: “to close, press together – to open, peel apart.” 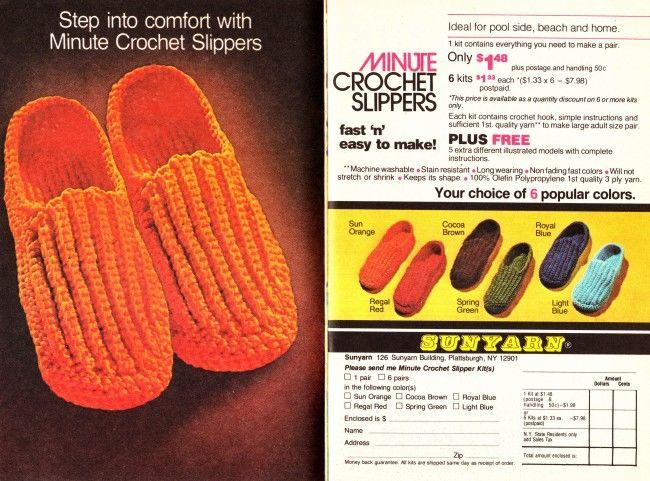 These slippers come in a variety of colors: Spring Green, Royal Blue, Cocoa Brown, and Glowing Nuclear Waste Orange. All Minute Crochet Slippers are machine washable and stain resistant, except the orange, which may cause birth defects, tumors and long term environmental devastation. 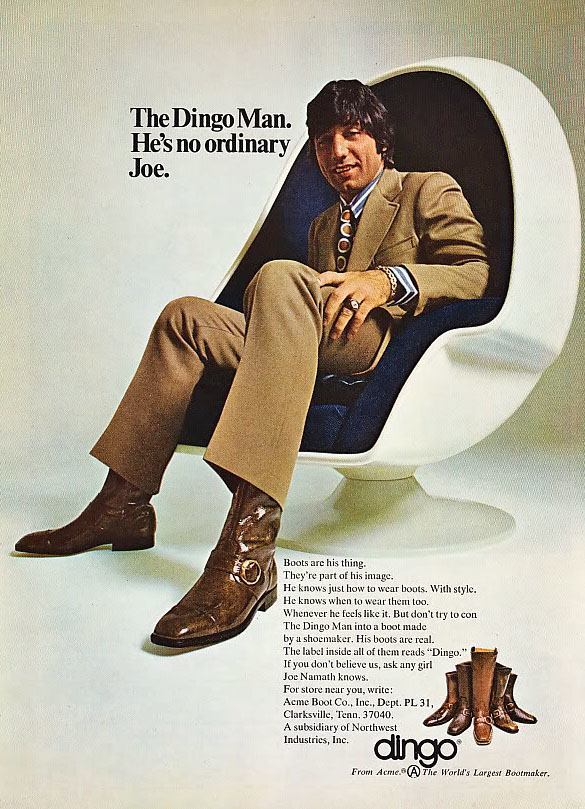 The infamous “egg chair” was perhaps mankind’s greatest creation, yet it fell out of favor by the end of the 1970s. You were comfortably enclosed within this upholstered ovum, and some even had speakers inside…. a toker’s throne, you might say. 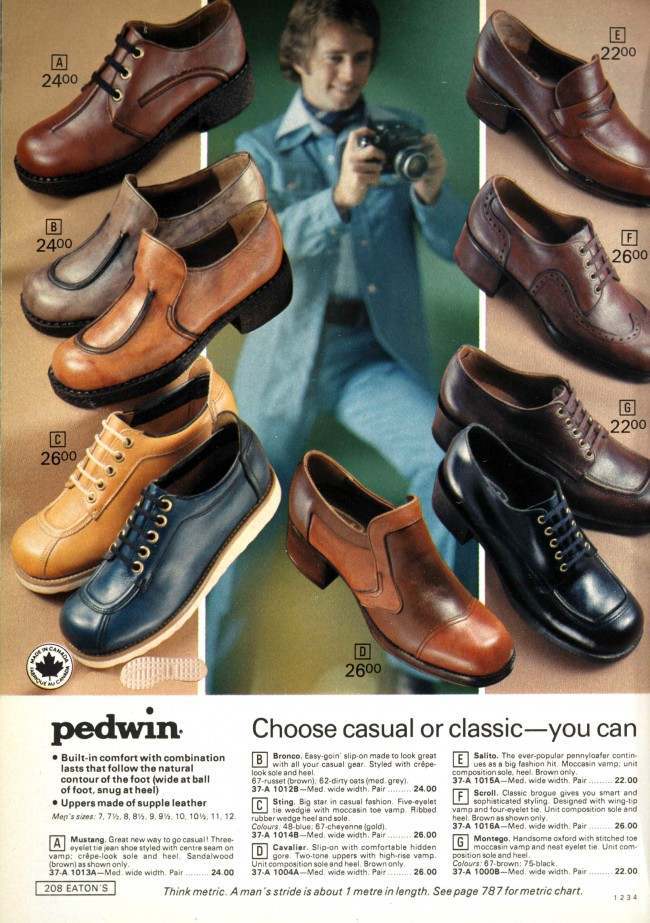 A guy in a leisure suit is framed by a ring of godawful footwear – Worst selfie ever. 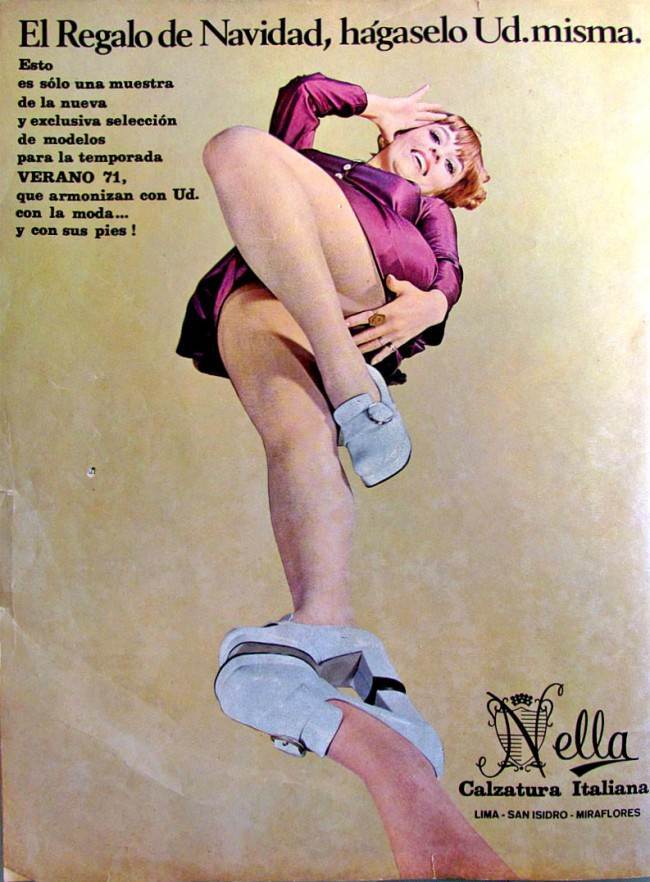 This seems to be nothing more than a cheap and shameless ploy to grab our attention by having us look up this chick’s skirt. In a perfect world, all adverts would be this cheap and shameless. I’ll wager this particular shoe advert had more than its share of men examining it close-up for any glimpse of immodesty.

And speaking of cheap and shameless… ¡Ay, caramba!