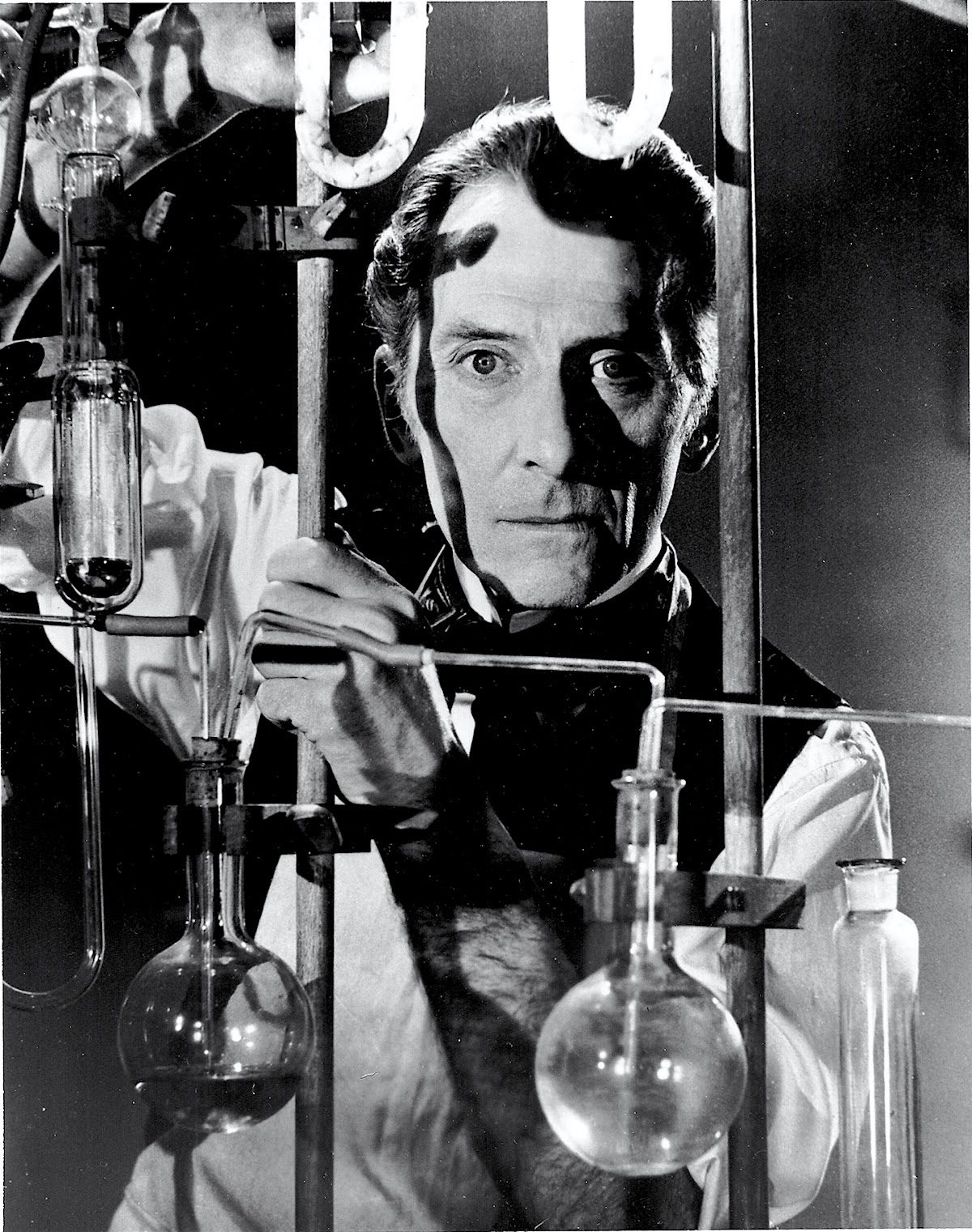 It was two-or-three weeks since I had written – a list of questions in search of hoped-for answers – and I was unsure whether I would ever get a reply. Then the letter arrived among the Saturday morning mail. A small blue envelope, pocketbook size, with italic script and a first class stamp. Inside was a small B&W photograph (Sherlock Holmes?) and a letter folded in three with a name in bold embossed at the top. It wasn’t the reply I had hoped for–no questions answered–but a response from Peter Cushing‘s amanuensis.

Mr. Cushing is away working, and I am dealing with his letters during his absence.

If you care to get in touch with any of Fan Clubs. they will be pleased to furnish you with the data you desire.

There followed three names and addresses before a “With all good wishes”. 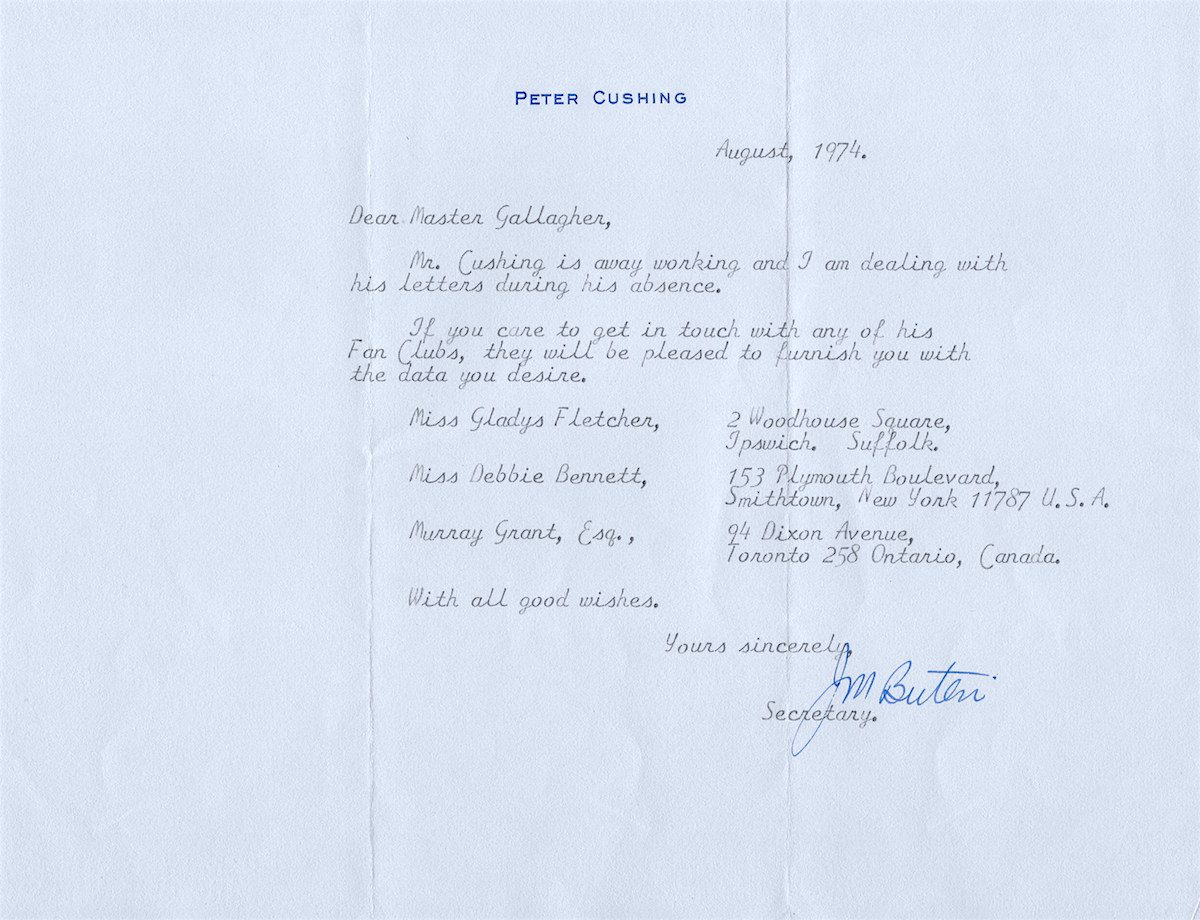 I was disappointed but then thought Mr. Cushing must be inundated with hundreds if not thousands of letters all asking the same dumb questions. Which role is your favourite? Do you like horror movies? What attracted you to acting? May I have signed photograph?

I can’t remember what I wrote or why exactly I did write. I was in primary school and had discovered a love of horror movies which had grown out of a moment of terror at a fun fair. Or was it seeing a clip of The Blob late one night squeezing under a locked door to menace Steve McQueen and Aneta Corseaut? It was one or the other, most probably both.

In the days of local television schedules, Scottish TV screened a strand of horror movies on a Friday night under the title Don’t Watch Alone. Reruns of Boris Karloff in Frankenstein, Bela Lugosi as Dracula, and those more recent entries like Oliver Reed‘s Curse of the Werewolf, Peter Cushing and Christopher Lee in Curse of Frankenstein, Dracula, and The Mummy. After a fish supper tea, I was allowed to either sit up late or was sent to bed for an hour or two until Don’t Watch Alone was about to begin. 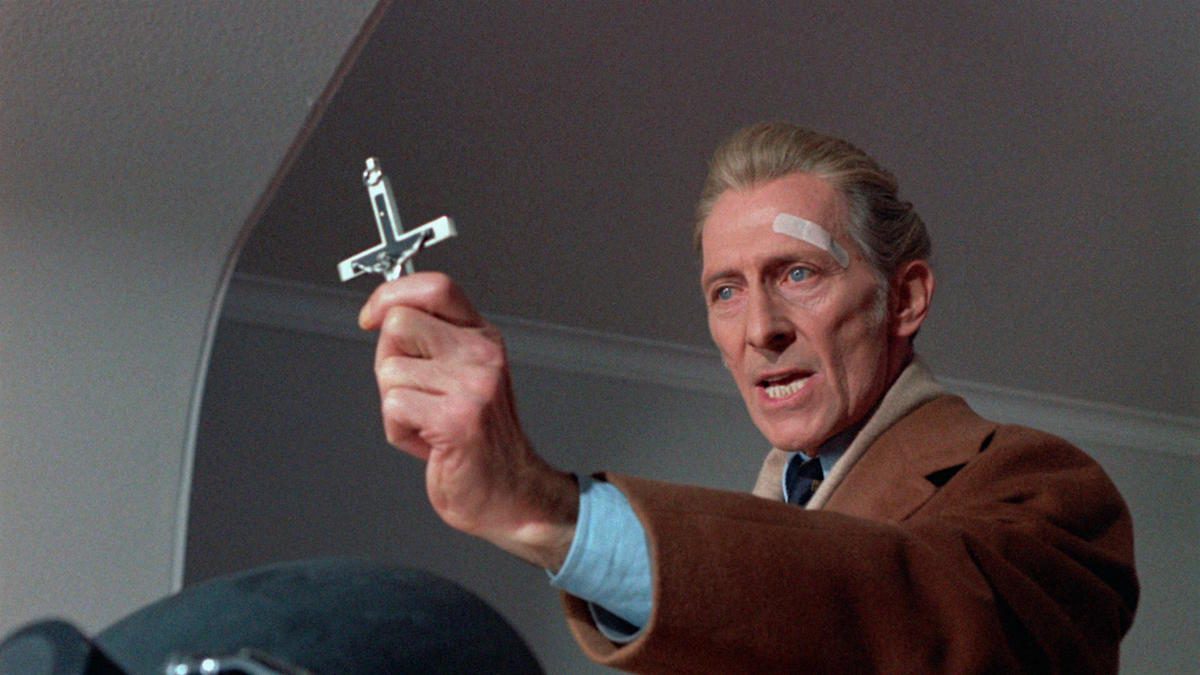 Why I preferred Cushing over Lee, or Karloff over Lugosi, I don’t know. Perhaps it was down to their subtlety and gentleness as actors. Lee and Lugosi had a forcefulness, a masculinity, an almost animal magnetism that made them irresistible. Cushing and Karloff offered more thoughtful nuanced performances. Perhaps that’s why I chose Cushing over Lee, or maybe it was more that I thought he would write me a reply?

The letter arrived and though deflated, I wrote back with thanks. I then contacted the Peter Cushing Fan Club and signed-up for 50p a year. Well worth it considering all that I received.

The fan club had been set up by Miss Gladys Fletcher in 1956. Fletcher had asked Cushing about setting up a fan club and he had eventually agreed. Fletcher was a remarkable woman (who may or may not be still alive) who had overcome polio to successfully run the Peter Cushing Fan Club for over twenty years.

One of the many things I discovered about Peter Cushing’s life from this dedicated club was the actor’s strange “death wish”. 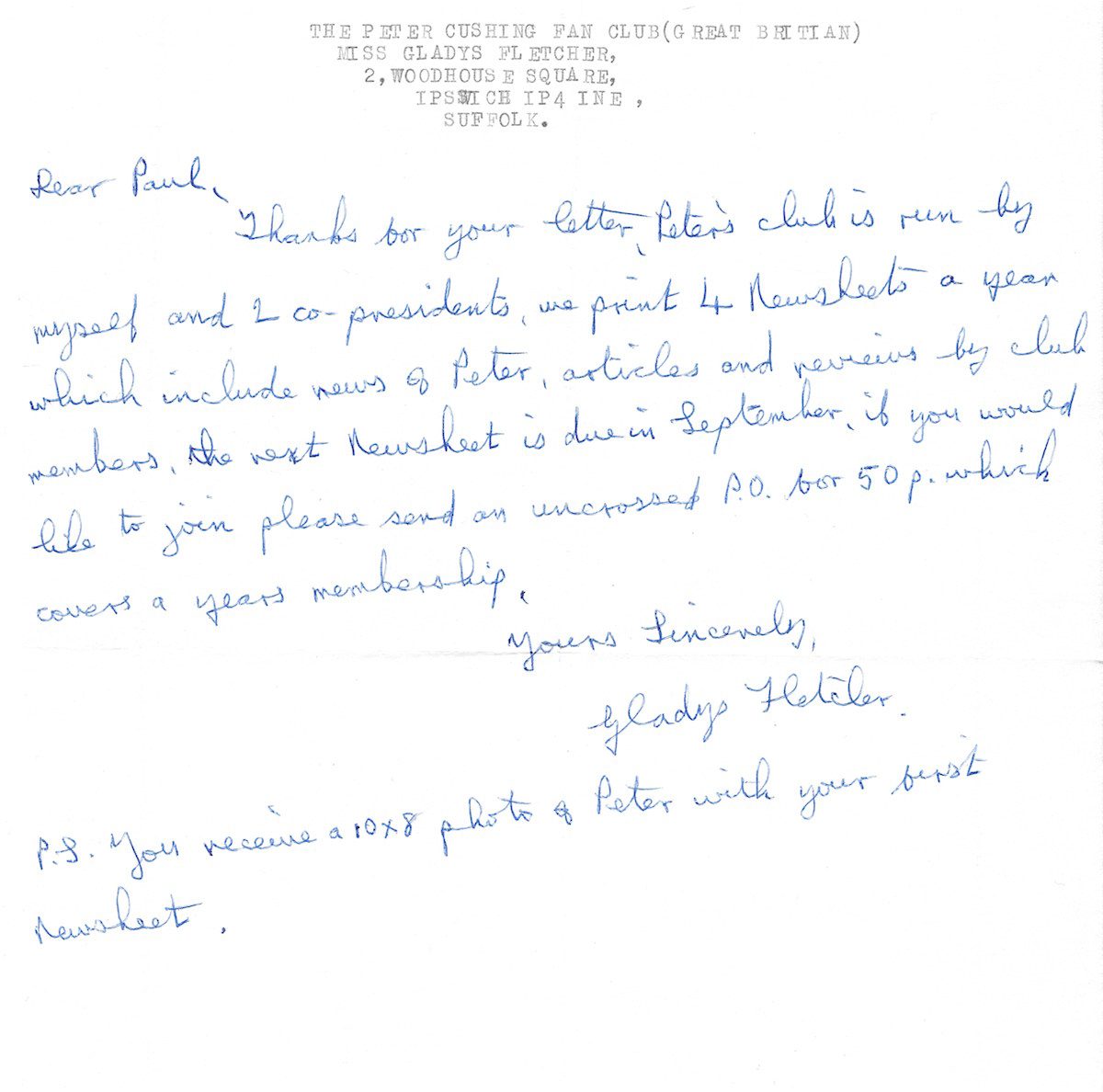 Although Peter Cushing was born in 1913 he always preferred to see the date of his birth as 1942–the year he met the woman who became his wife, Violet Helen Beck.

It was love-at-first-sight. The couple married in 1943, thereafter, Helen, a former actress became the centre of Cushing’s life, encouraging him and supporting him throughout the early, lean years of his career. As Cushing later said:

I owe it all to Helen. She was an actress and gave up her career for me. She made me what I am. She gave me a confidence, I could never have found on my own.

In many of Cushing’s movies, a small silver framed portrait of Helen was often placed as a prop on the desk of Baron Victor Frankenstein or in the study of Professor Van Helsing. 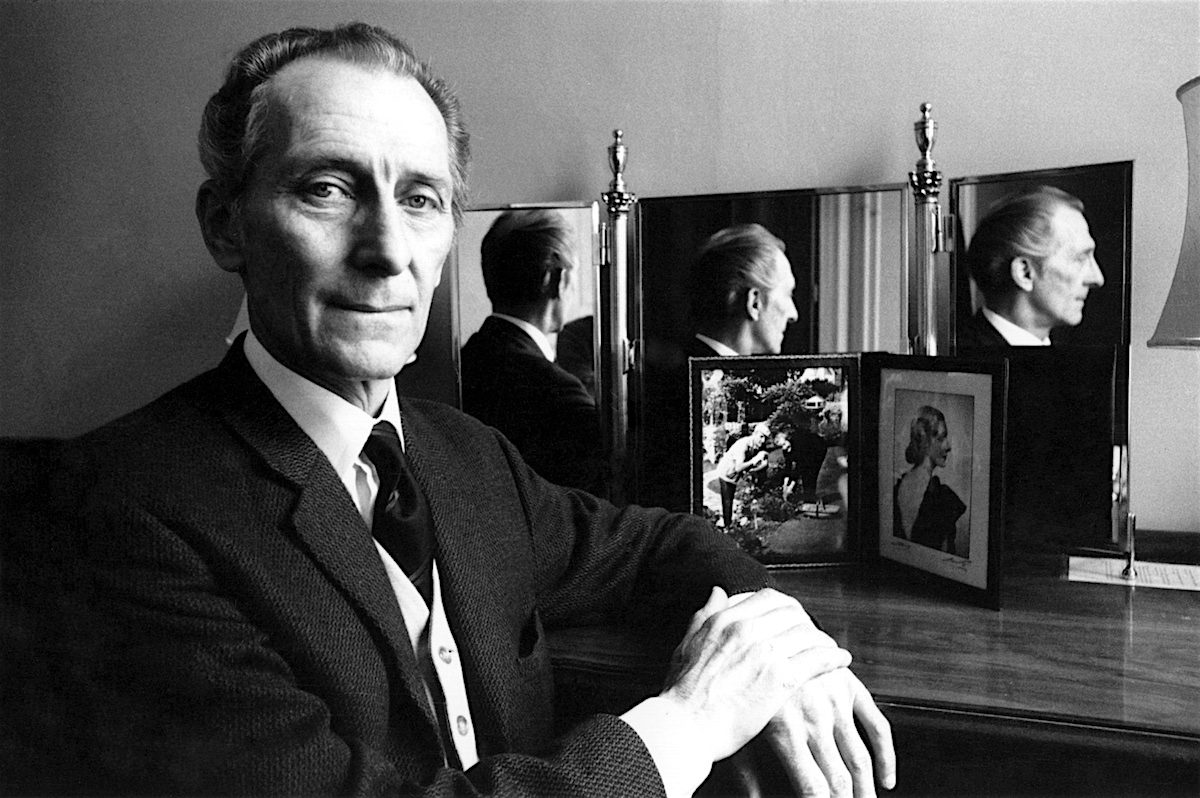 Cushing’s life with Helen was lived more on a mental plane than a physical one, as he told New Reveille in May 1974:

We didn’t consider the physical aspect of marriage very important.

Cushing claimed their love so great that his life ended the day Helen died in 1971. 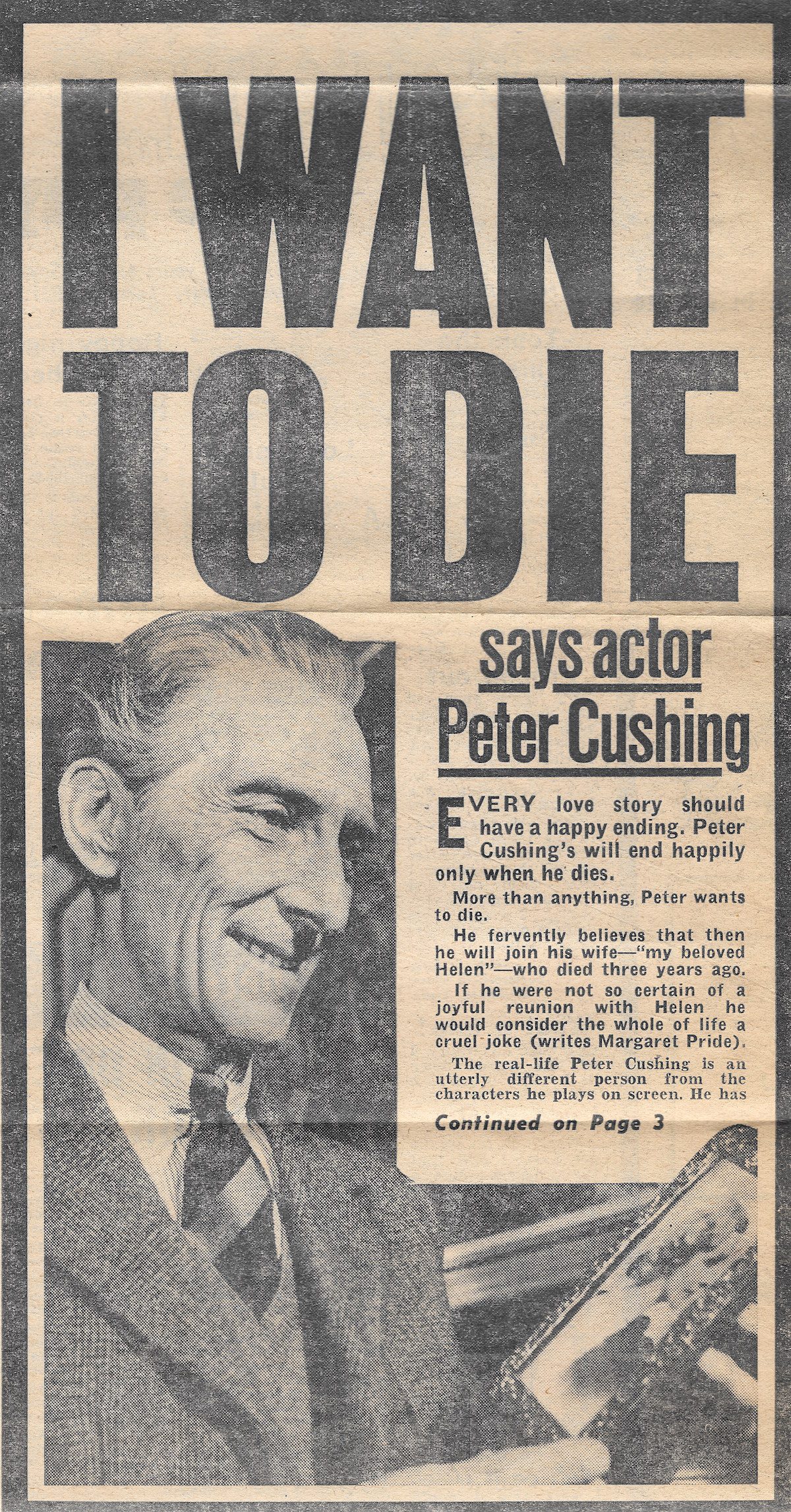 That night Cushing repeatedly ran up and down stairs in their house in an attempt to induce a heart attack. He failed and later claimed his actions had been caused by the trauma of his Helen’s death:

I had always hoped that we would depart this life together, but it was not to be.

From then on, Cushing had a death wish and stated death was the only happy ending to his love affair with Helen.

I am not a religious man, but I try to live by Christian ethics. Helen has passed on but she is with me still. She is all around. What I am doing is merely existing–longing for the day when I shall die and join her for ever. We will be together again but time does not heal.

Before she died Helen wrote Peter a poem telling him “not to be hasty to leave” until he had lived the life he had been given. As Cushing explained to the New Reveille:

I could not take away my life, because that would be letting Helen down. But I would be so happy if I could die tomorrow. 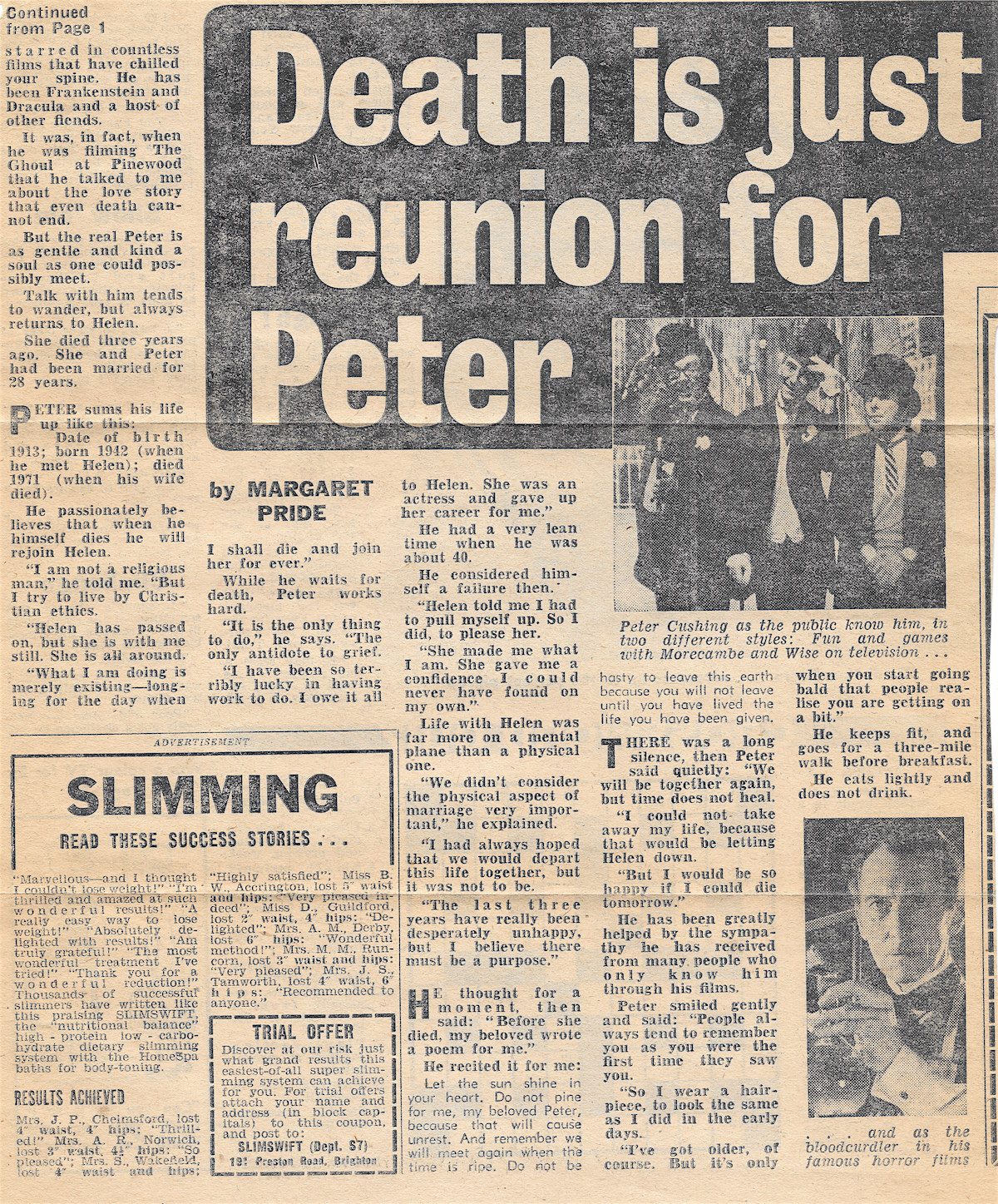 As a footnote: Cushing appeared on the ITV magic show The Amazing World of Kreskin in October 1973. George Kreskin is an American magician and “master of psychic powers and mind-reading”.

The show started with Kreskin presenting a card trick before introducing his guest Peter Cushing. Kreskin said of Cushing that:

…all of my staff have been saying what a wonderful man and what a gentle man to have on the show..

He then asked Cushing how such a gentle man became associated with horror movies? Cushing asked “How long have we got? before answering:

In 1951, I started doing television and people at Hammer Films saw me doing three years of television and wanted me to do a picture for them, but I was tied up for three years and when that three years was over, I heard they were going to do make The Curse of Frankenstein film, and I said ‘I’d love to do it,’ and here I am, my dear.

Cushing went onto share a few anecdotes of his time in Hollywood and about his latest film The House That Dripped Blood. The programme finished with Kreskin explaining how he had asked Cushing to write down “something of significance in his life, a name, a date, or whatever” on a piece of paper which he then placed in an envelope and sealed it. Cushing then presented this envelope with its secret information to Kreskin, who him to burn it before continuing:

Now your message is destroyed. Now Peter, you have heard of stigmata, which has many associations with the days of the Salem witch trials in America. It was described as the raising of blood, in association with religion, a phenomenon of the raising of blisters on the flesh. Peter would you concentrate on this incident?

Cushing played along while Kreskin closed his eyes and let out a dramatic sigh. He then rolled up his shirt sleeve before saying:

Kreskin then asked Cushing to hold his wrist and take the ashes of the burned envelope and rub them along his forearm. The ashes were hot, but Cushing did as was asked. As he began to rub the ashes Kreskin said:

Concentrate on the name. [Dramatic pause] The name Peter, is Helen.

As Cushing continued to rub in more ashes an “H” and then an “E” appeared on Kreskin’s arm.

Kreskin: I think it’s significant we have got the “H” and the “E” and obviously that would allude to Helen inevitably, Peter, I would not get it any further.

Cushing: My dear fellow it would not matter less if it came on there or not, for you to know that’s fantastic.

Kreskin: I became a little saddened but it has been beautiful, your wife is deceased and I know it was a life of great joy and happiness.

Cushing: I shall be with her again. 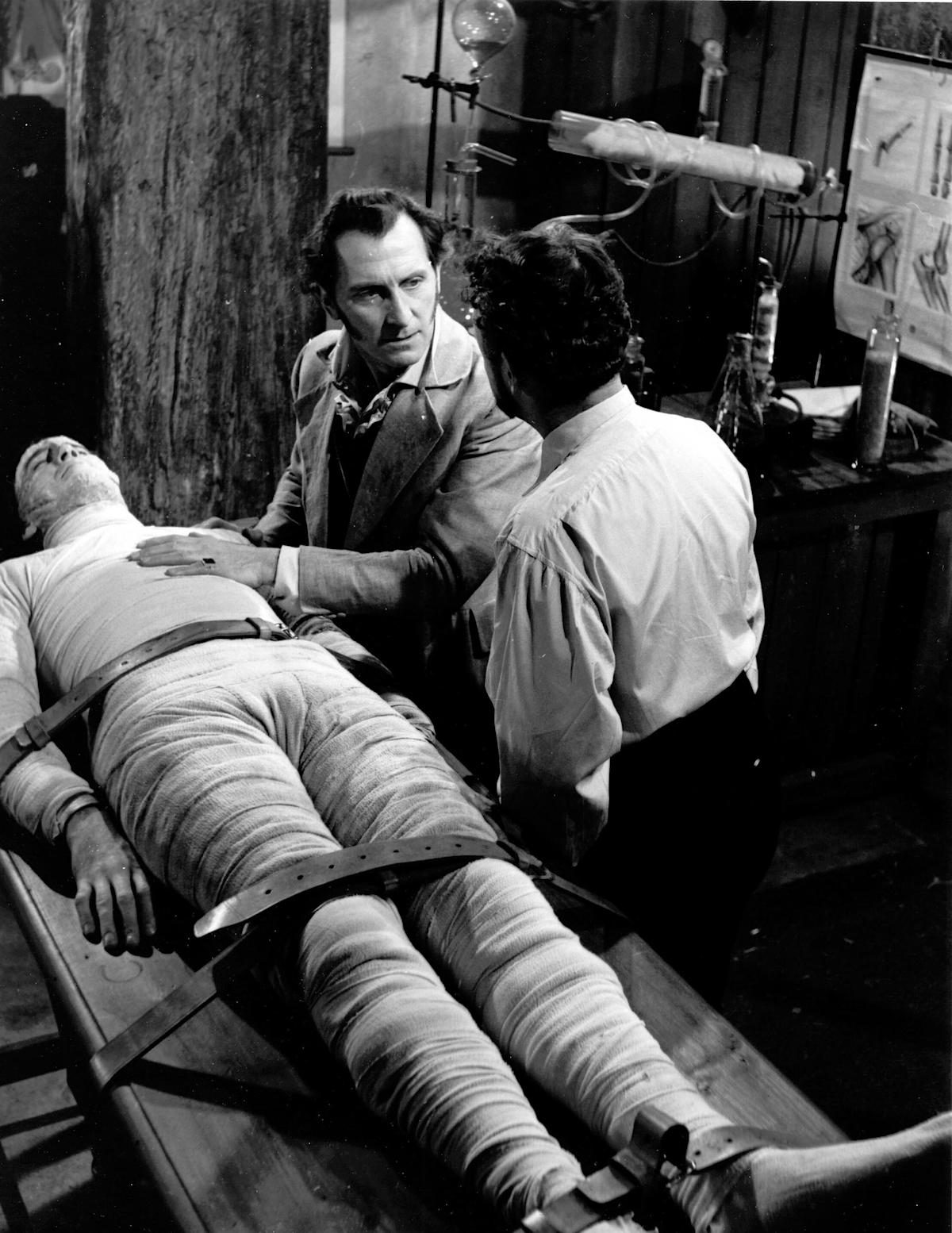 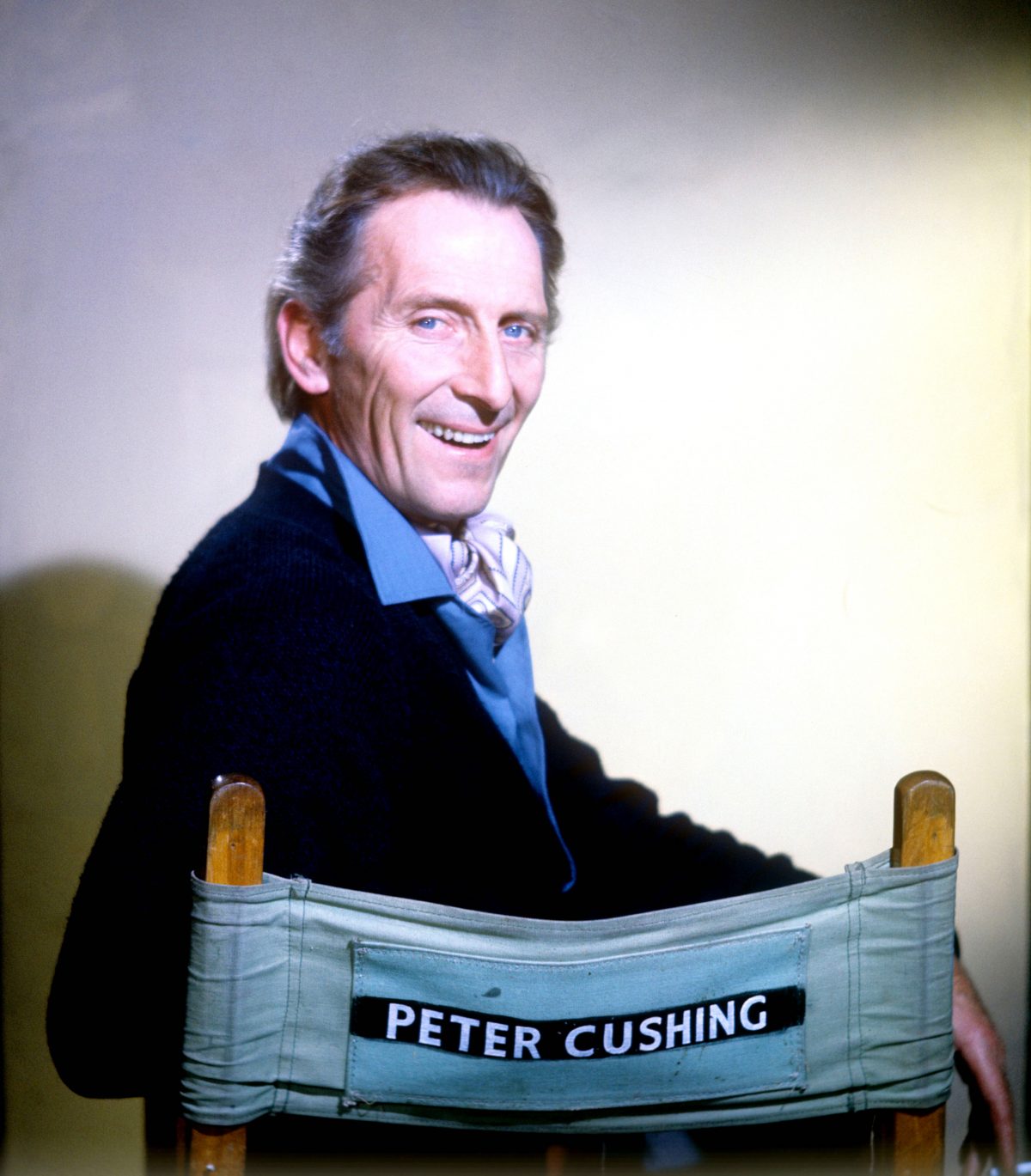