I am Arthur Frayn, and I am Zardoz.
I have lived 300 years,
and I long to die,
but death is no longer possible.
I am immortal.
I present now my story,
full of mystery and intrigue,
rich in irony, and most satirical.
– Opening lines to Zardoz by John Boorman 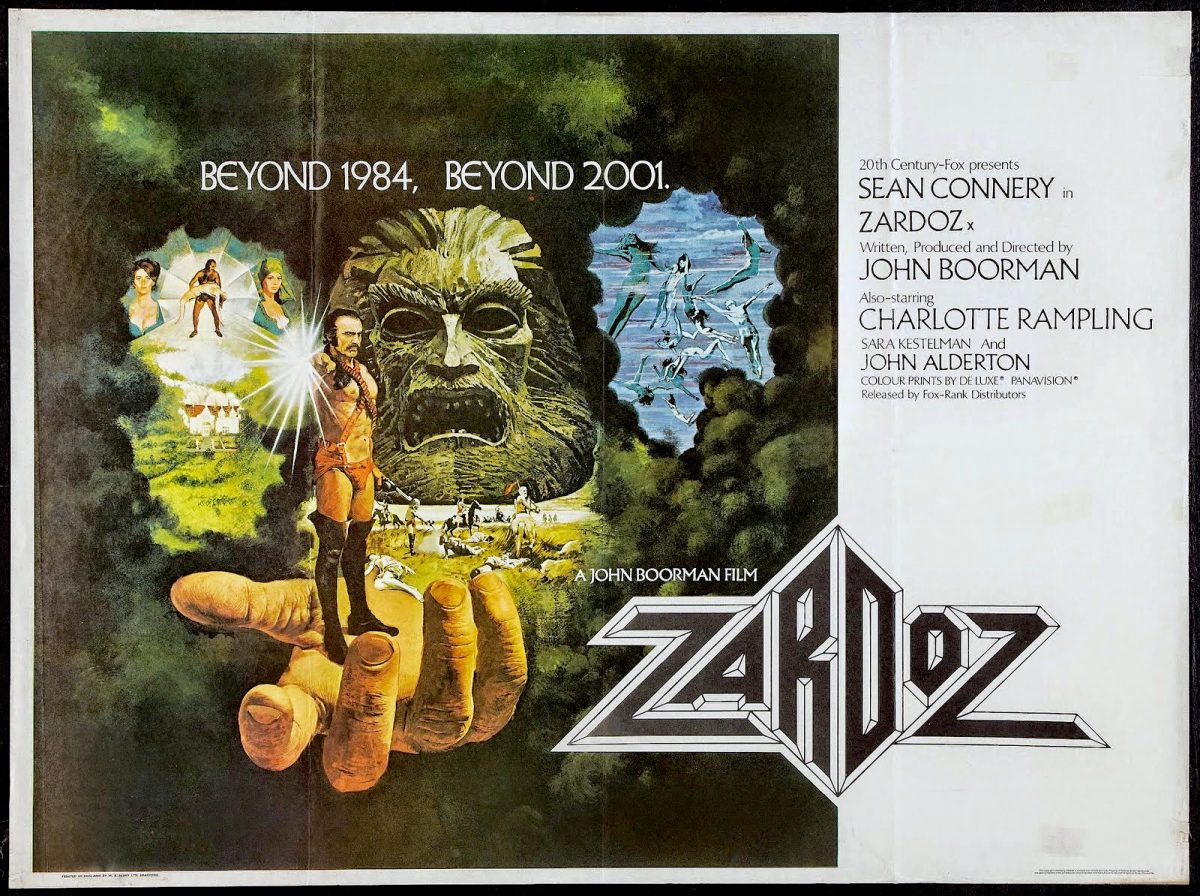 My education began in earnest when I bought a copy of John Boorman’s and Bill Stair’s novel Zardoz. I was about eleven. The book was a tie-in or novelisation of Boorman’s movie which I was way too young to see even in a pair of three-inch platforms. For whatever reasons, this book sparked something in me. You can call it an epiphany or a satori or whatever. It gave an insight into how the world operated. A debauched elite controlling the masses through fear of God while encouraging unbridled sex and violence. It was 1974 and Marc Bolan suddenly didn’t kick it anymore.

The book (along with quite a few others) has stuck with me over the years. I had walked home from school for a week to save the money on bus fares to buy it. After reading it, nothing was ever quite the same. How could it be? When within its opening pages a flying godhead Zardoz has descended from the heavens to tell his worshippers:

“You have been raised up from Brutality, to kill the Brutals who multiply, and are legion. To this end, Zardoz your God gave you the gift of the Gun. The Gun is good!

“The Penis is evil! The Penis shoots Seeds, and makes new Life to poison the Earth with a plague of men, as once it was. But the Gun shoots Death and purifies the Earth of the filth of Brutals. Go forth, and kill! Zardoz has spoken.”

At the time, I was gripped by the grand sweep and didn’t appreciate that this book, this story could be viewed as a kick-back at the promiscuousness of the swinging 1960s.

Boorman was apparently more influenced in his story-telling by the free love communes on the west coast of America than anything political. Those communes Gay Talese indulged in when writing his expose Thy Neighbor’s Wife. Boorman alluded to such in a revealing Playboy interview:

Researching for the film, Boorman visited many communes throughout the U.S.A. “I was shocked,” he admits now, “in the way you are shocked by something you thought you knew and find you didn’t. I was shocked because women were living in the commune in real equality with the men and I realized I hadn’t seen that before. I had thought that I believed in women’s equality, but I discovered that really I didn’t. I can’t accept that they’re the equals of men. Guilty about it? Yes, but I can’t add any more to my burden of guilt. Once you get to 40, you really can’t take on any more.” 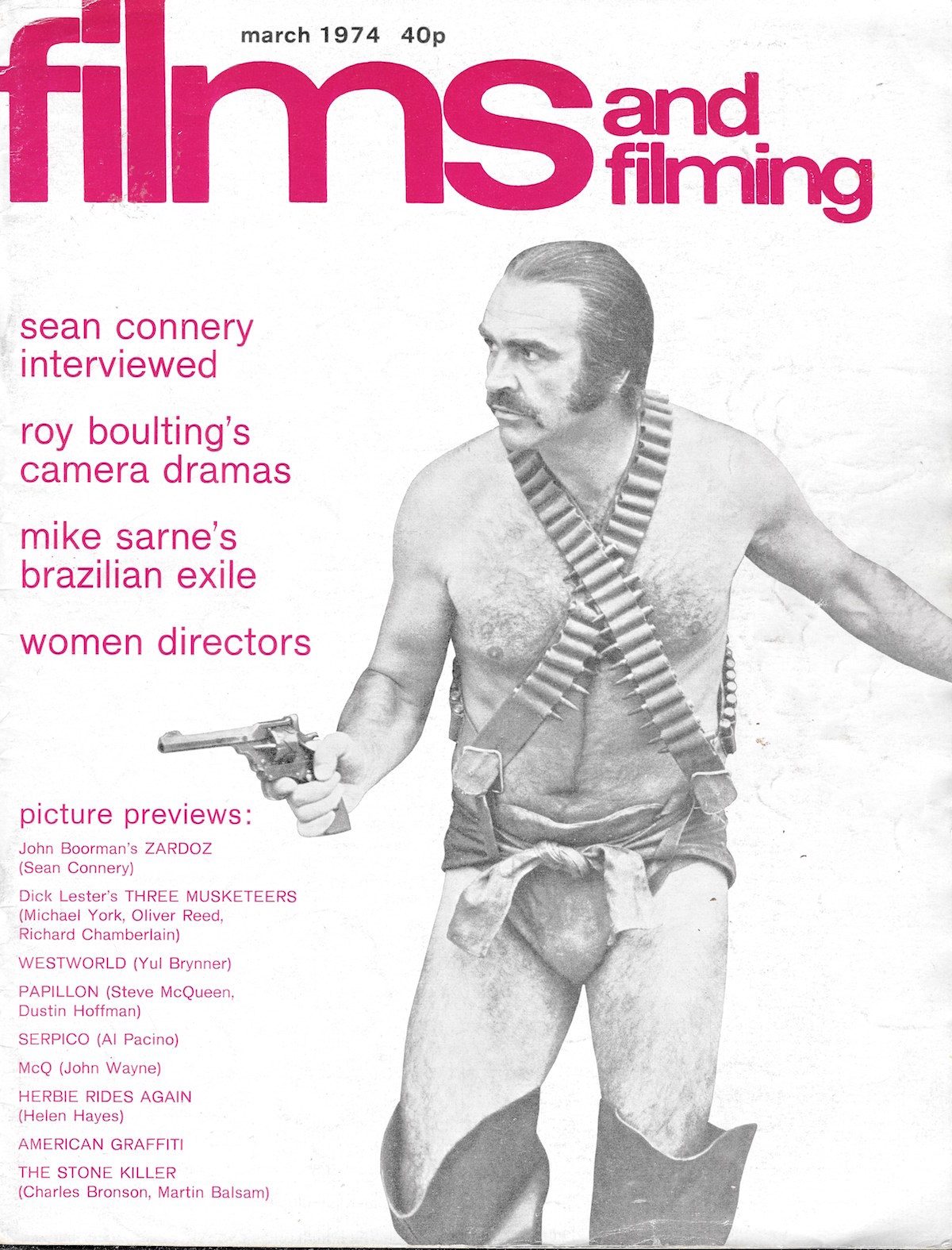 When Sean Connery was sent the script, he was “absolutely caught by its originality”, as he told Gordon Gow from Films and Filming in 1974:

It was one of the best ideas I’d come across for ages…So by the following weekend I was over in Ireland to prepare for filming.

What gripped me especially was the direction the people in [the script] were taking in the future existence, as opposed to space ships and rockets and all that…

…What does interest me is the possible development of society in centuries to come. The way different levels and types evolve in the script is intriguing and refreshing, and could well be true. The fact that people are not going to die, for example.

Many things are changed by the knowledge you’re not going to die. There’s no need to procreate, therefore it takes away the sexual drives. Today we live in the age of analysis: we can give answers as to why people do things, whether it’s ambition or fighting for power or because they hated their father or their mother – their hangups become a kind of blueprint to their behavior.

But if you take that away you get an entirely different concept of human beings.

Connery hadn’t been Boorman’s first choice, that had been Burt Reynolds, with whom Boorman had scored the major hit Deliverance. Somehow I can’t imagine Reynolds carrying off the thigh high boots or red loin cloth, or exuding the necessary untrammelled masculinity.

With the success of Deliverancve, Boorman was given free rein to make what he wanted. He started working on a science fiction script in 1972, and brought in Bill Stair to “…help rationalize the visions that threatened to engulf me.”

Set in the 23rd century, where Exterminators trade grain with their god – Zardoz–for guns to exploit and kill. Enter Zed (Connery) who questions why a god would require grain, and so sneaks on board the flying godhead to uncover the secret of Zardoz and life beyond the Outlands in the Vortex.

The Outlands: once it was called the good Earth. Now it is the desolate, exhausted, polluted wasteland all the world has become, except for the lush Vortex.

The Eternals: members of the Vortex. Highly privileged scientists and intellectuals, eternally young, who have learned all the Secrets of Life – except one.

The Exterminators: a privileged and physically superior group permitted to breed under strict control to fight the Brutals and support the Vortex.

The Brutals: the last survivors of the dying world outside the Vortex, who live at subsistence level.

The Apathetics: victims of the pursuit of perfection, they are Eternals who have found the strain of immortality too great and live only for the one thing their society denies them.

The Renegades: malicious, embittered offenders in the Vortex who would defy and destroy the establishment – if they could only find it. 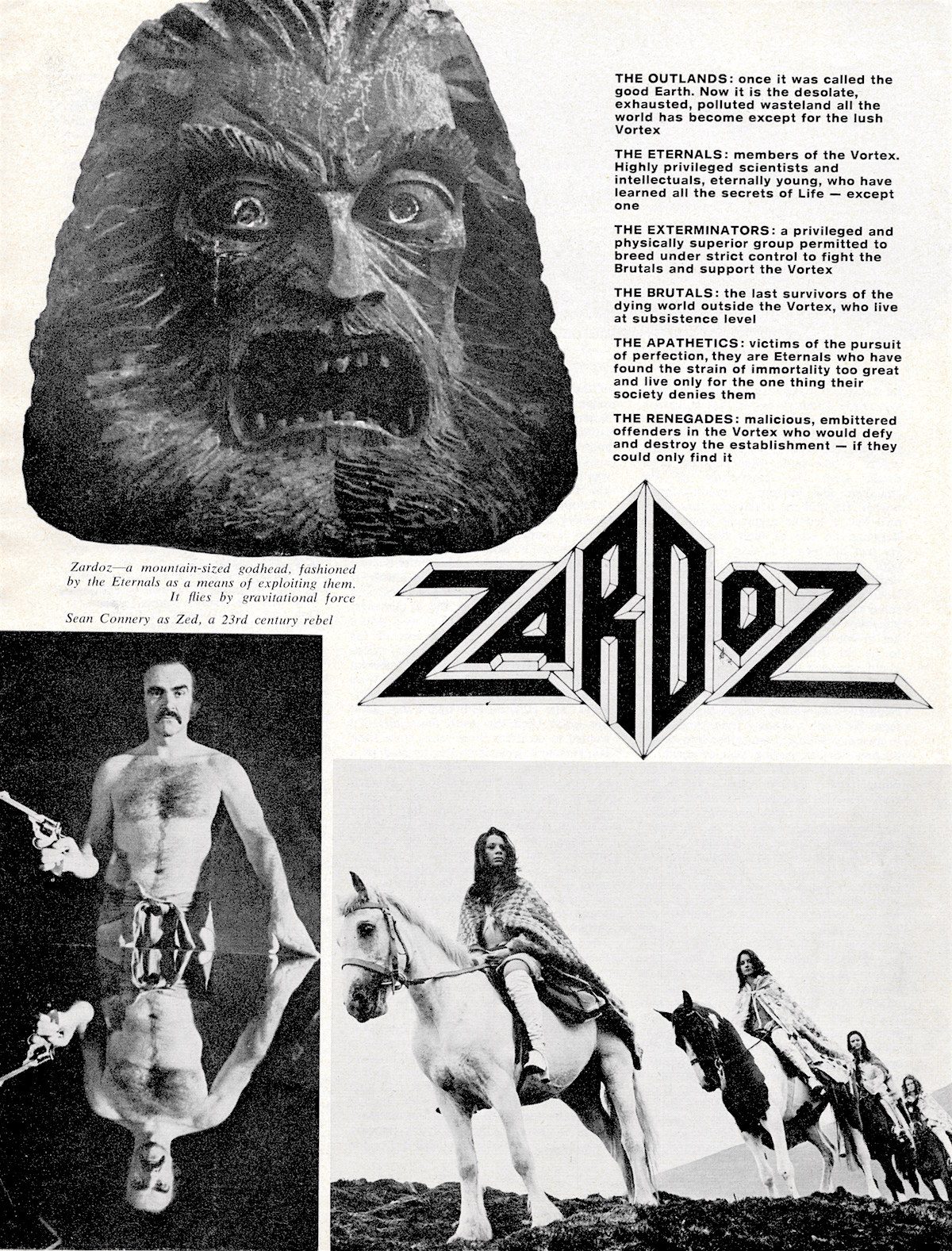 As Connery explained to Gow:

Then society, as it always does, starts to fragment into different strata. There are the Apathetics and the Renegades. They are all Eternals, these people, who are going to live forever. The base of all the great learning that the world has accumulated by that stage becomes a Tabernacle, which gives people information as to how to act, like a major computer, a great feed-tank put together by the best minds of the world. But the human condition is such that it still retains anger and other emotions.

There are areas like oases: each is known as a Vortex. They exist throughout the world on a system of highly democratic rule with guidelines supplied from the Tabernacle. But the Renegades abhor the system and fight it…[..]…On the other hand, the Apathetics are reluctant to do anything at all..the Renegades they’d really like to die, to get out.

Beyond the Vortex areas, there are the Outlands: very barren. The inhabitants there are called the Brutals, they’re rather like our present society, not very civilized. The god Zardoz gives the Brutals something to worship, the gun. the penis is evil, the gun is good. The Brutals are necessary to each Vortex, because they’ve been taught to provide wheat and other food substances…[..]…This is where the character I play comes in. I hide in the head…[..]…and set about destroying the society.

Connery sometimes made strange but often brave decisions as an actor. During the height of James Bond in the sixties, he starred in the brilliant low-budget movie The Hill, in which he delivered one of his best performances. Then in the seventies, he signed-up for The Anderson Tapes, but showed the depth of his talent in the unrelenting power of The Offence against Ian Bannen, where he played a cop interrogating a suspected child murderer.

Zardoz was a brave move. Though it’s claimed Connery took the role as he needed money. Even so, his performance and Boorman’s take on the world pay dividends. 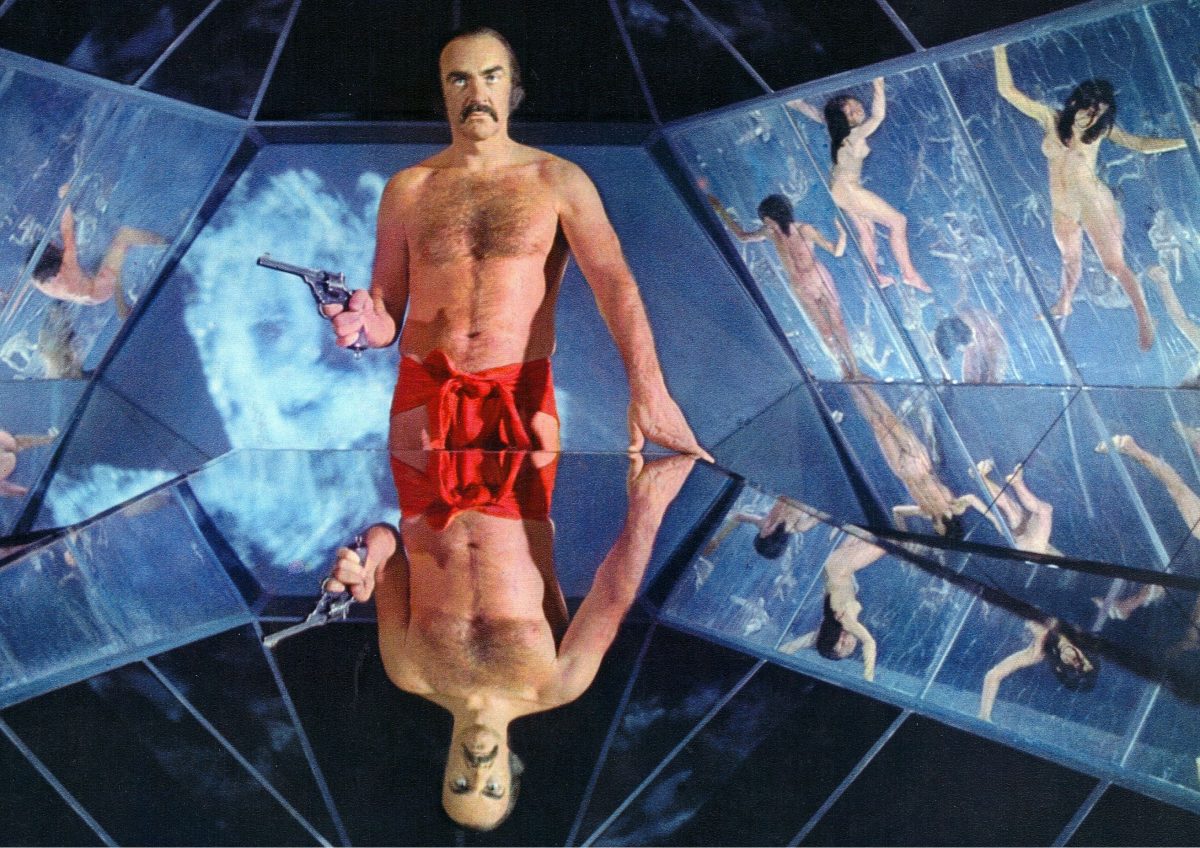 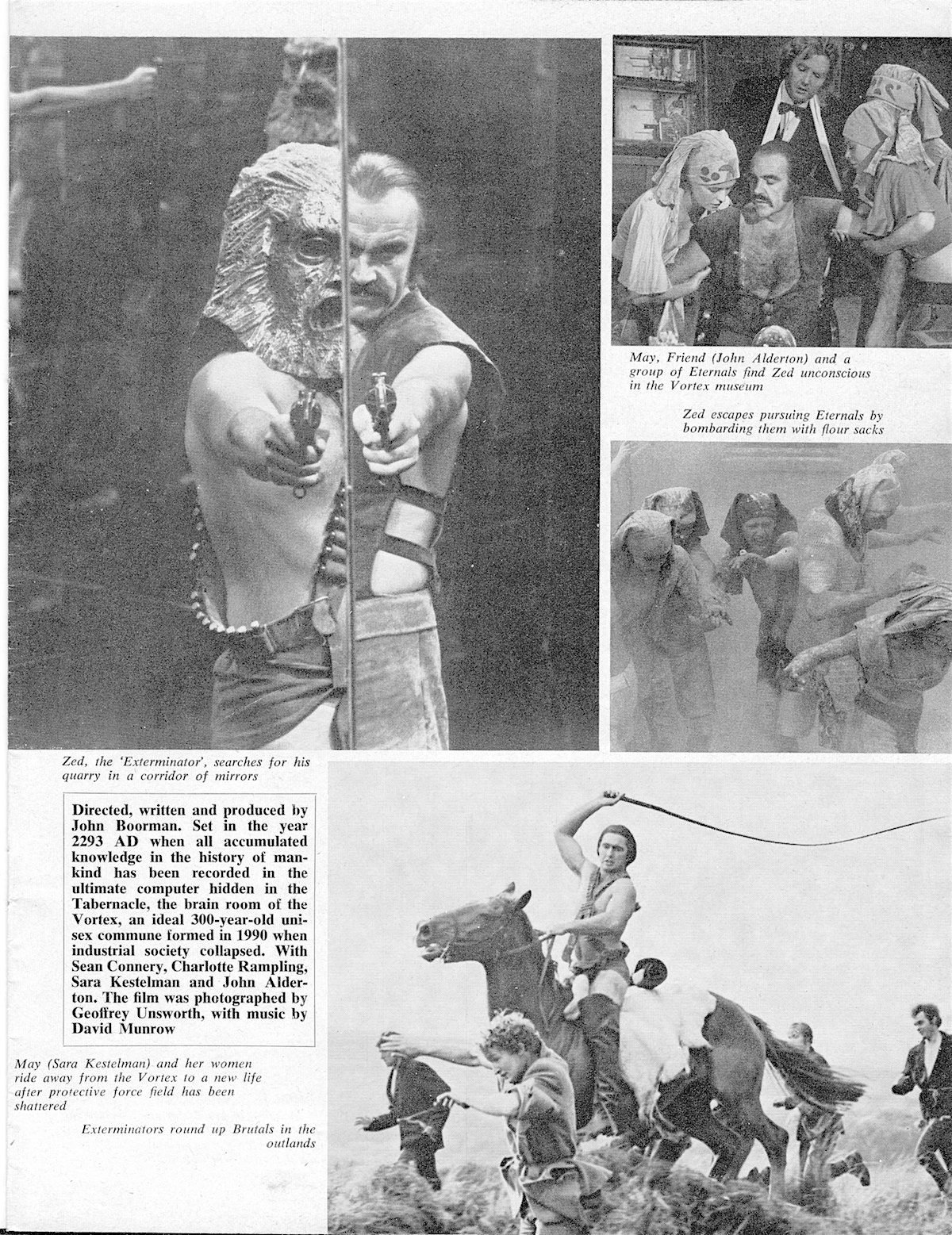 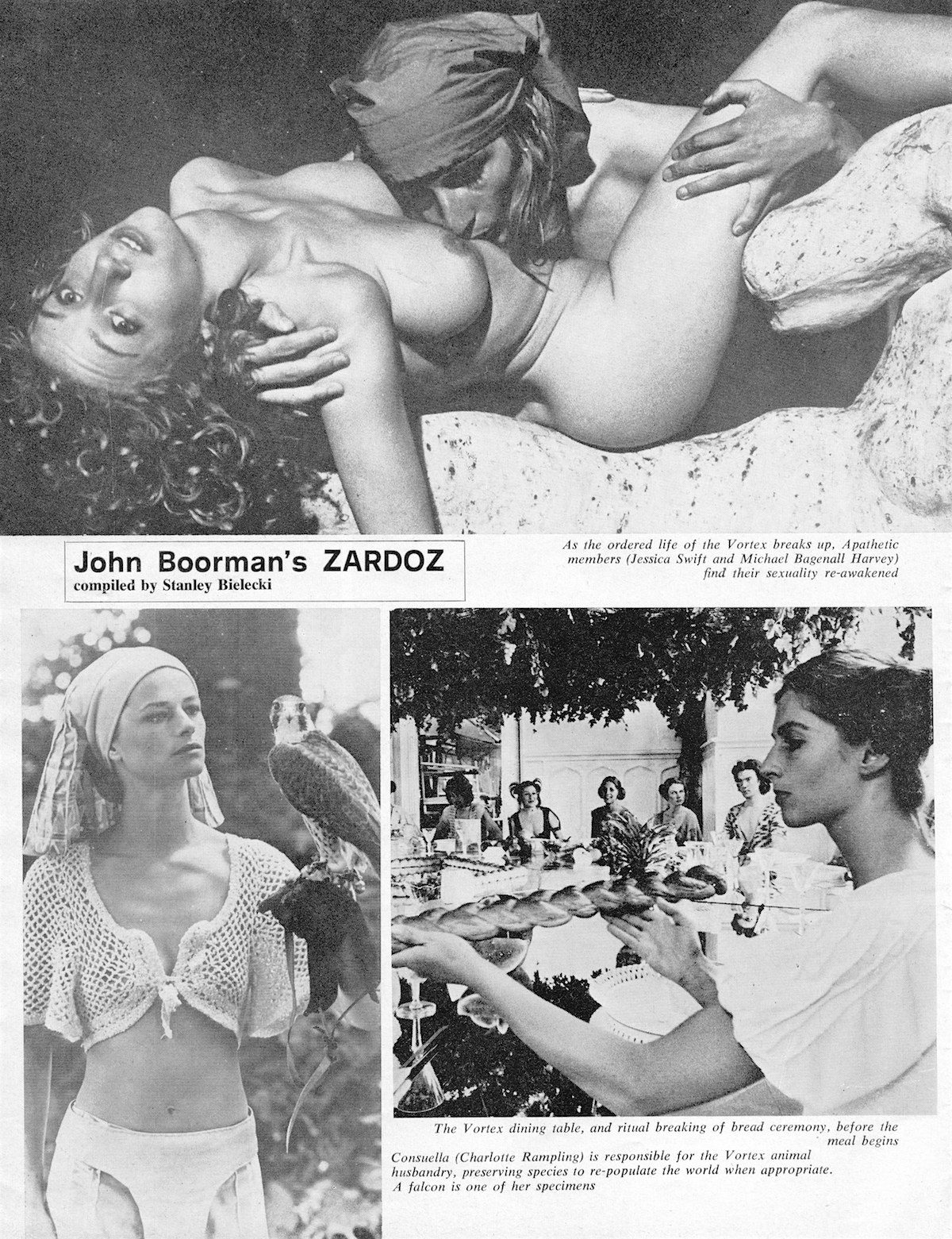 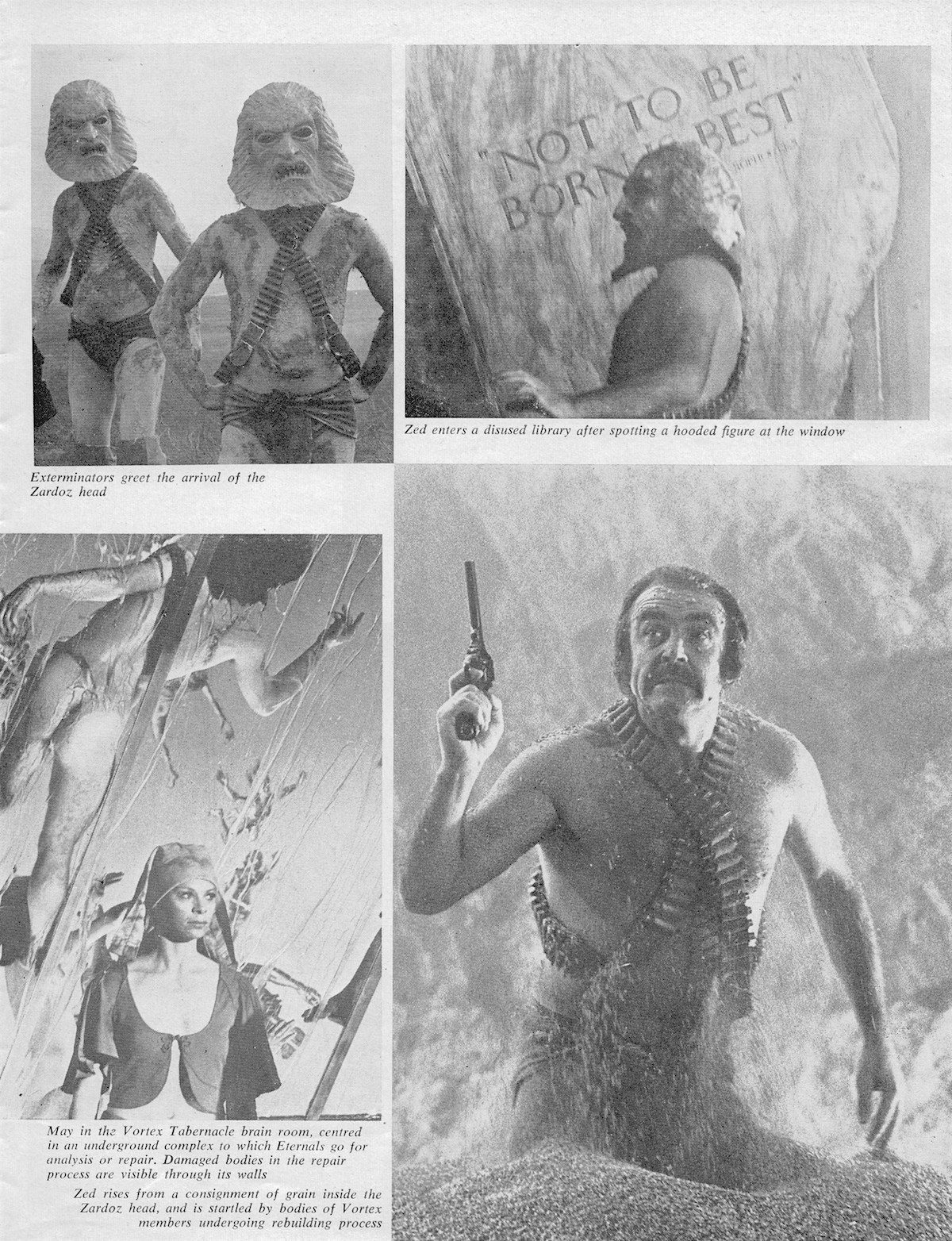 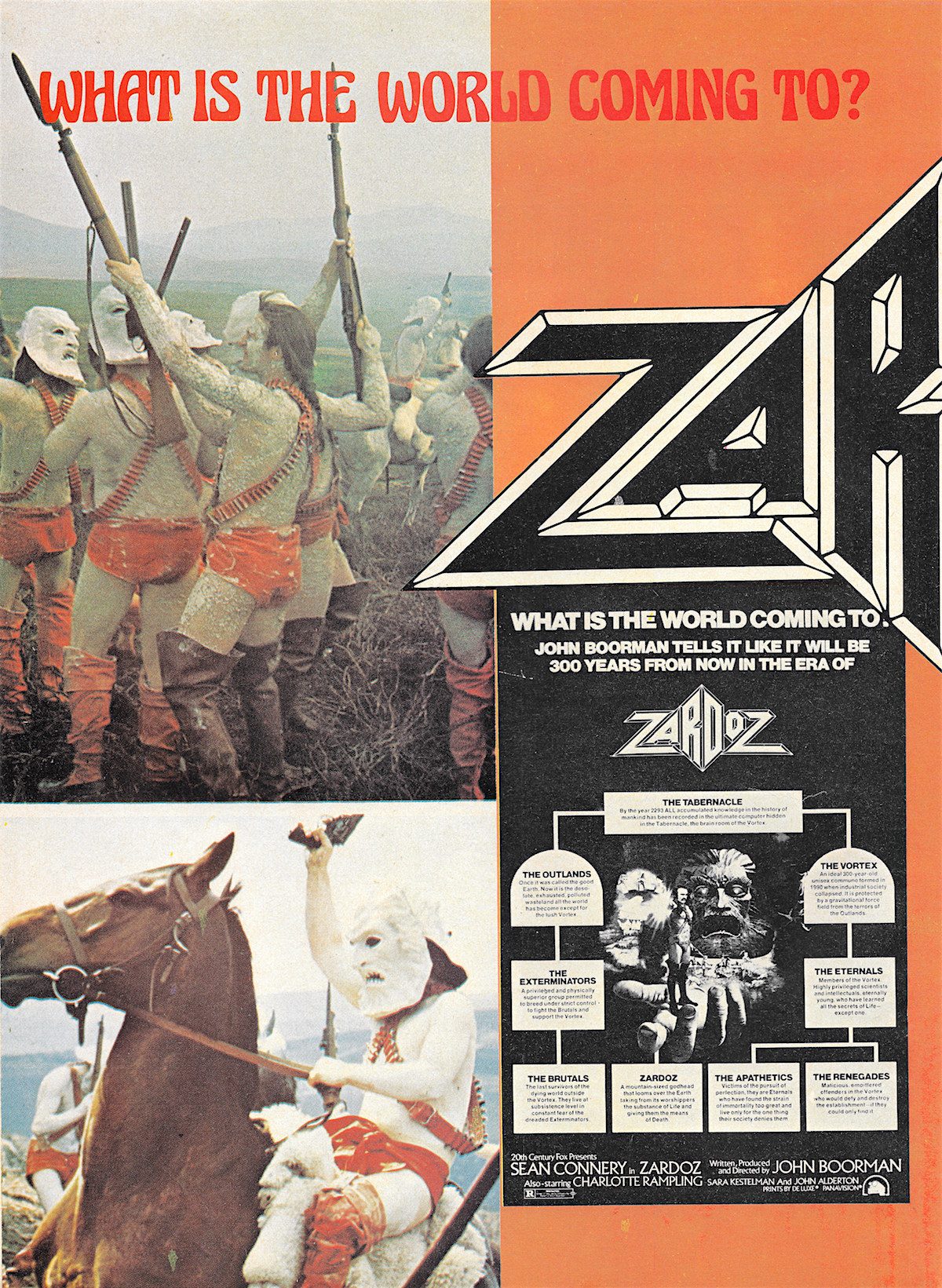 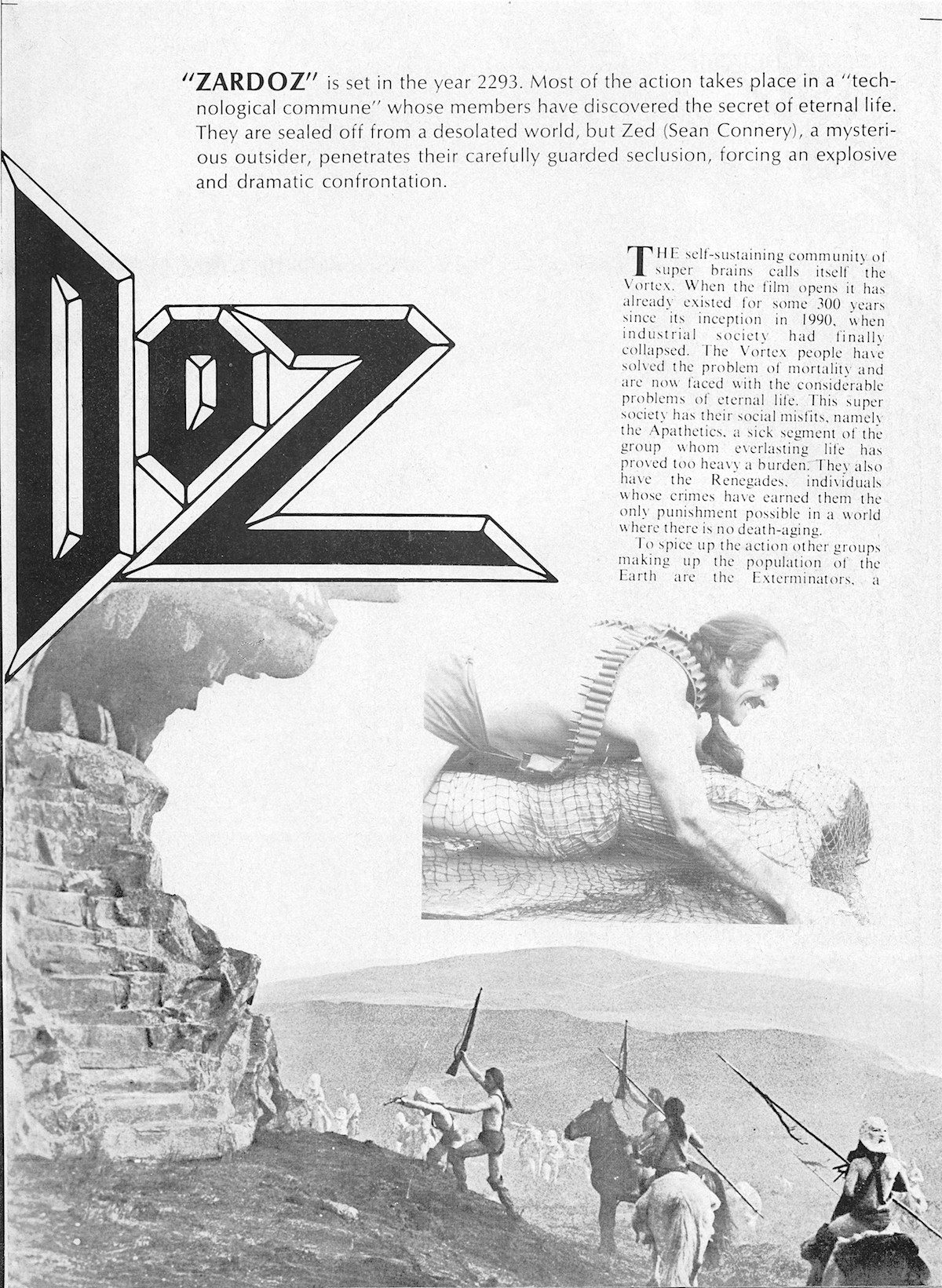 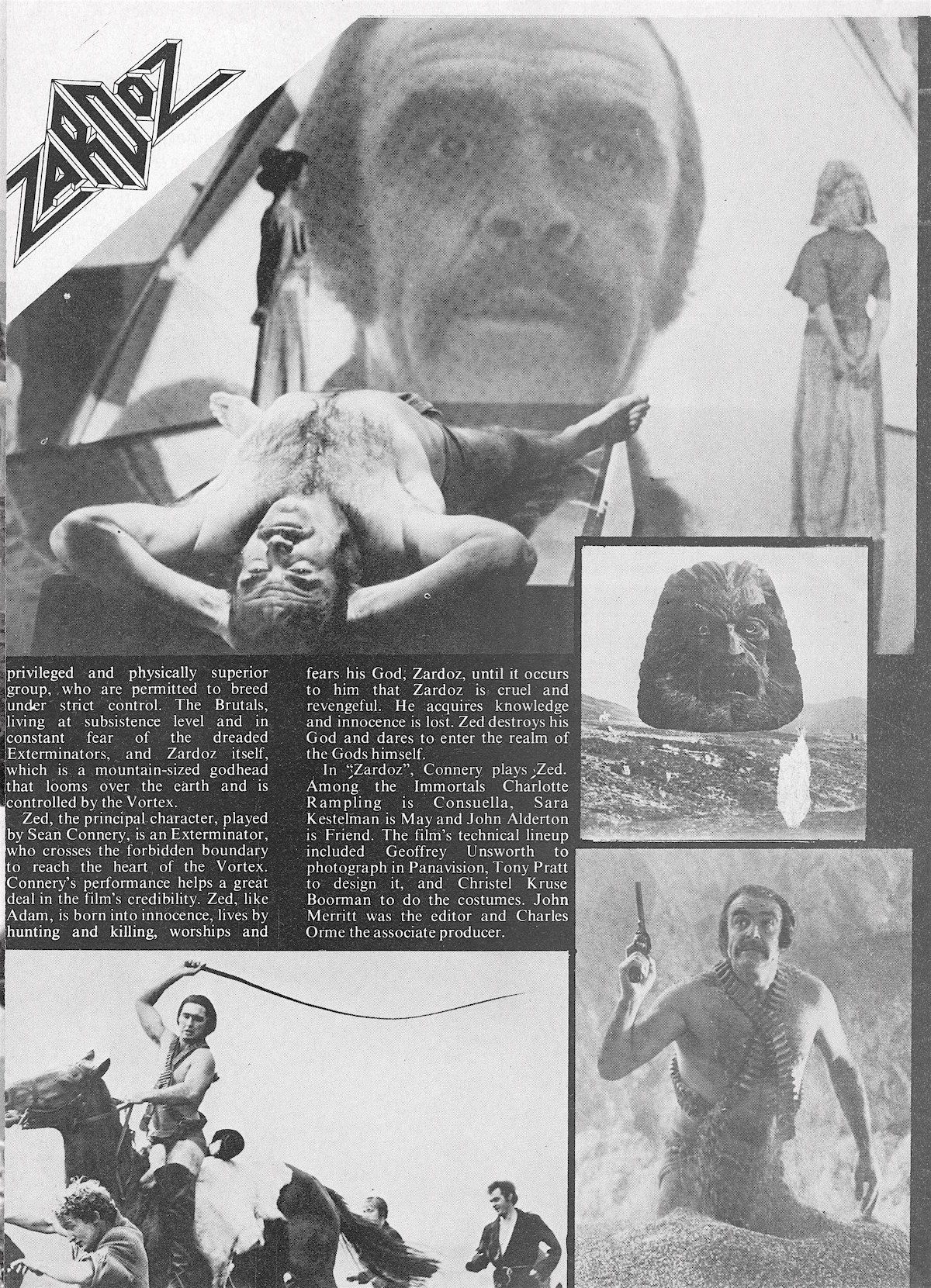 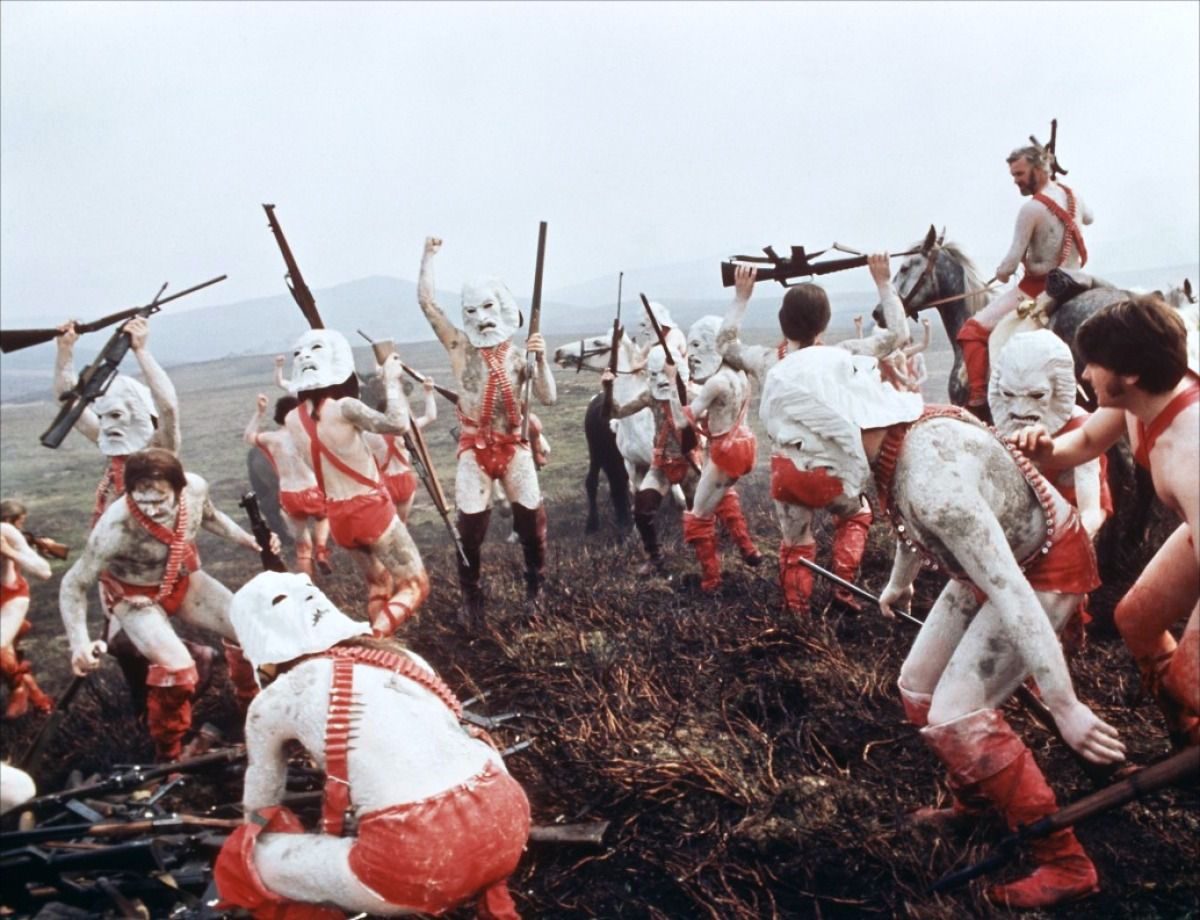 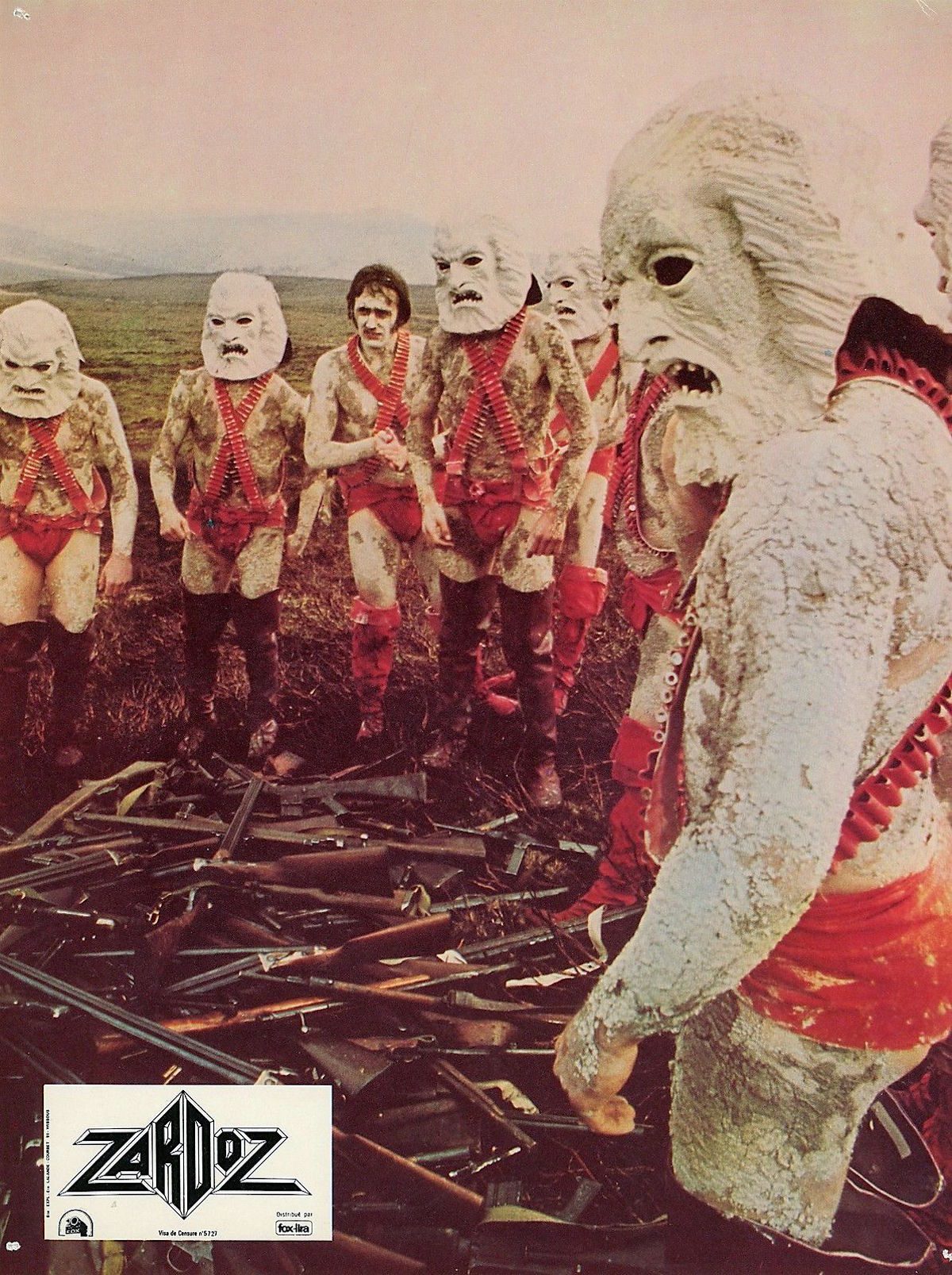 And here’s the complete Films and Filming interview with Sean Connery. 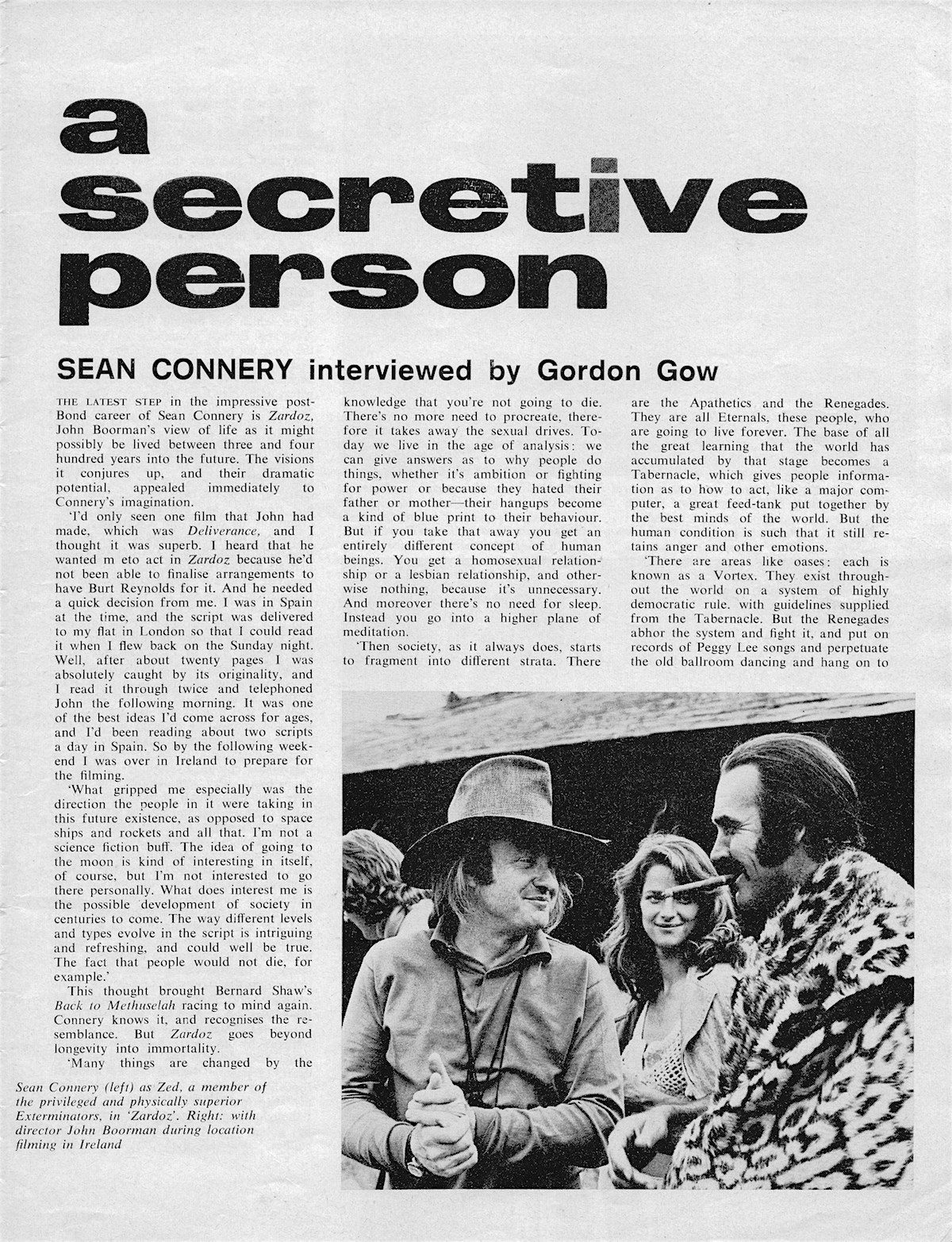 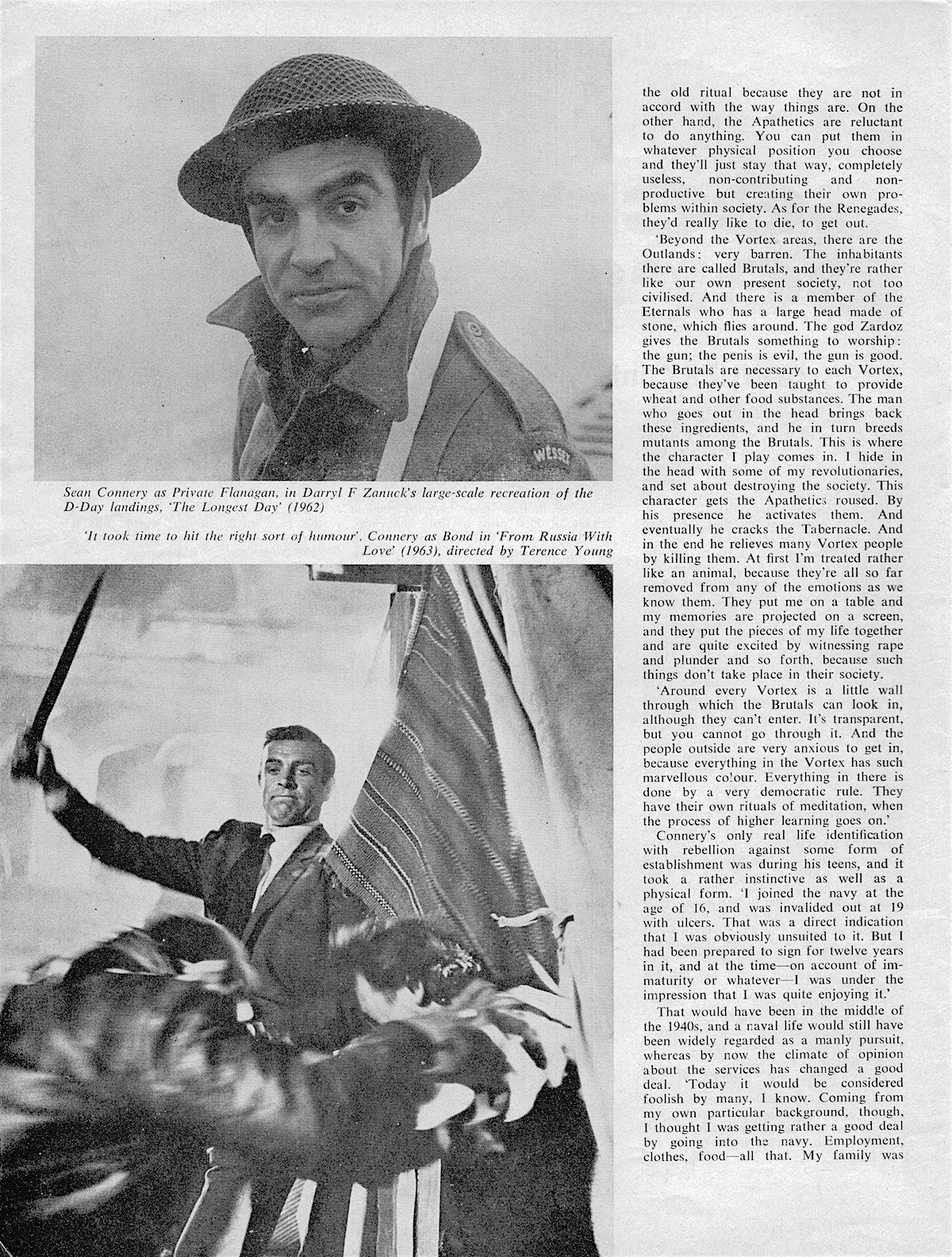 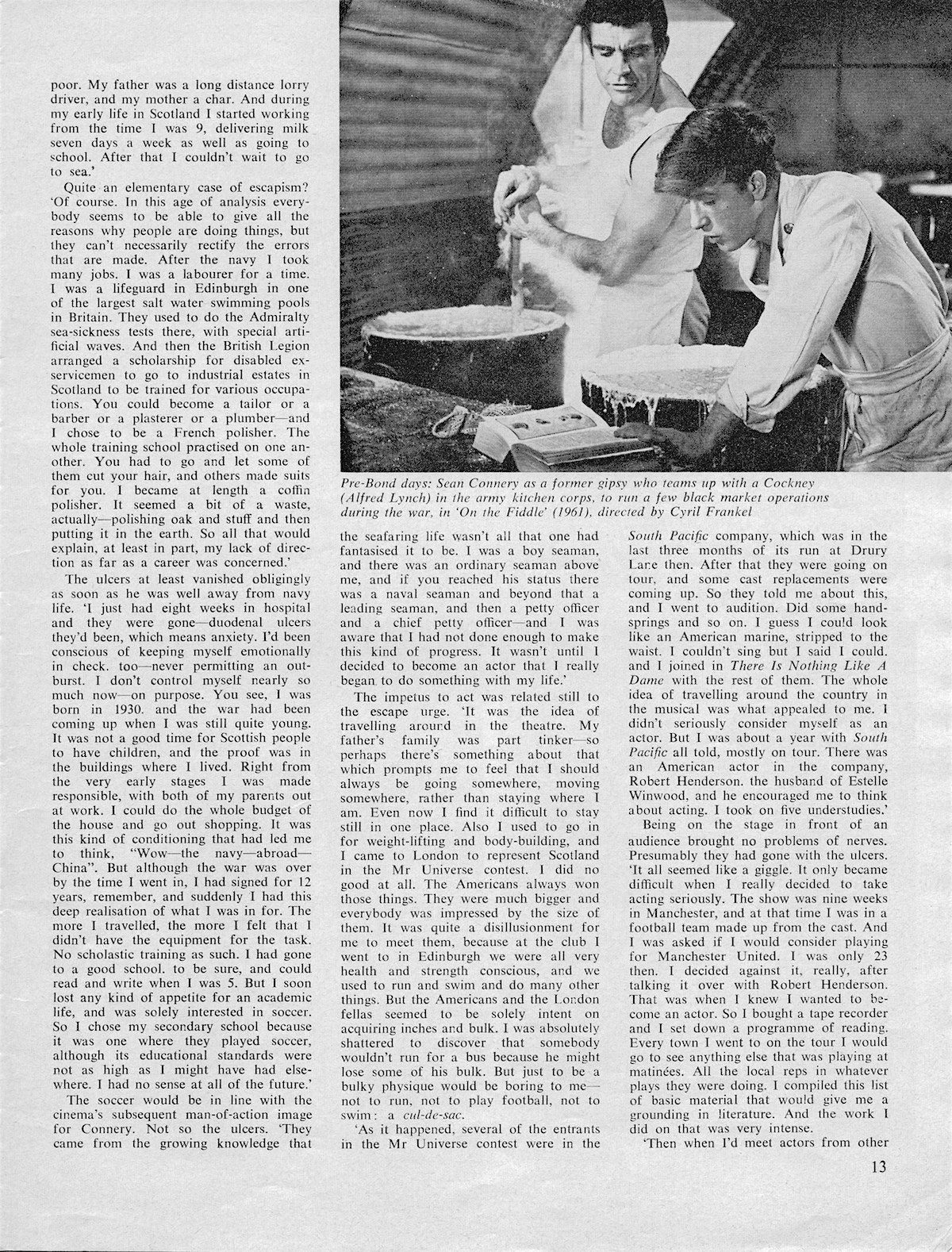 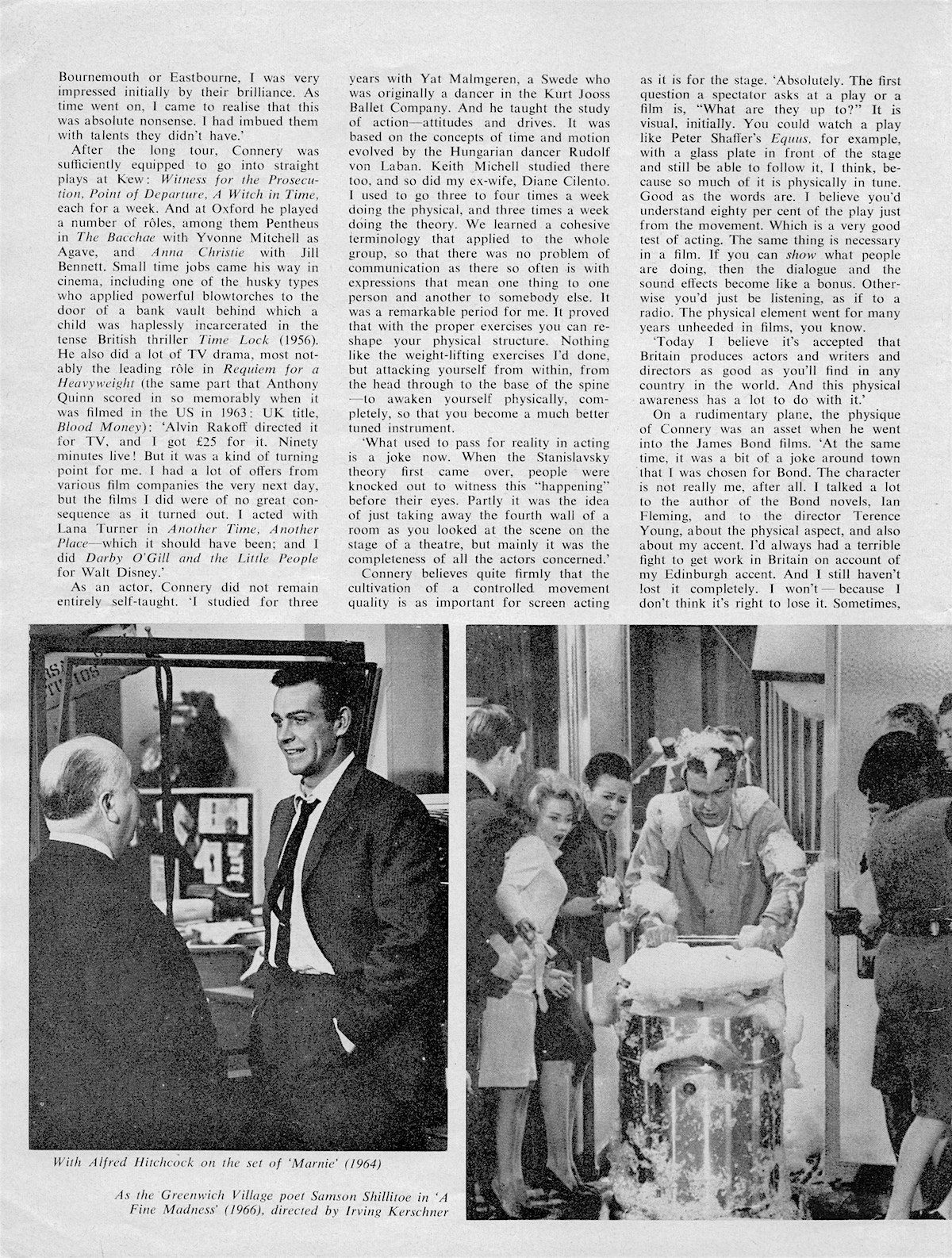 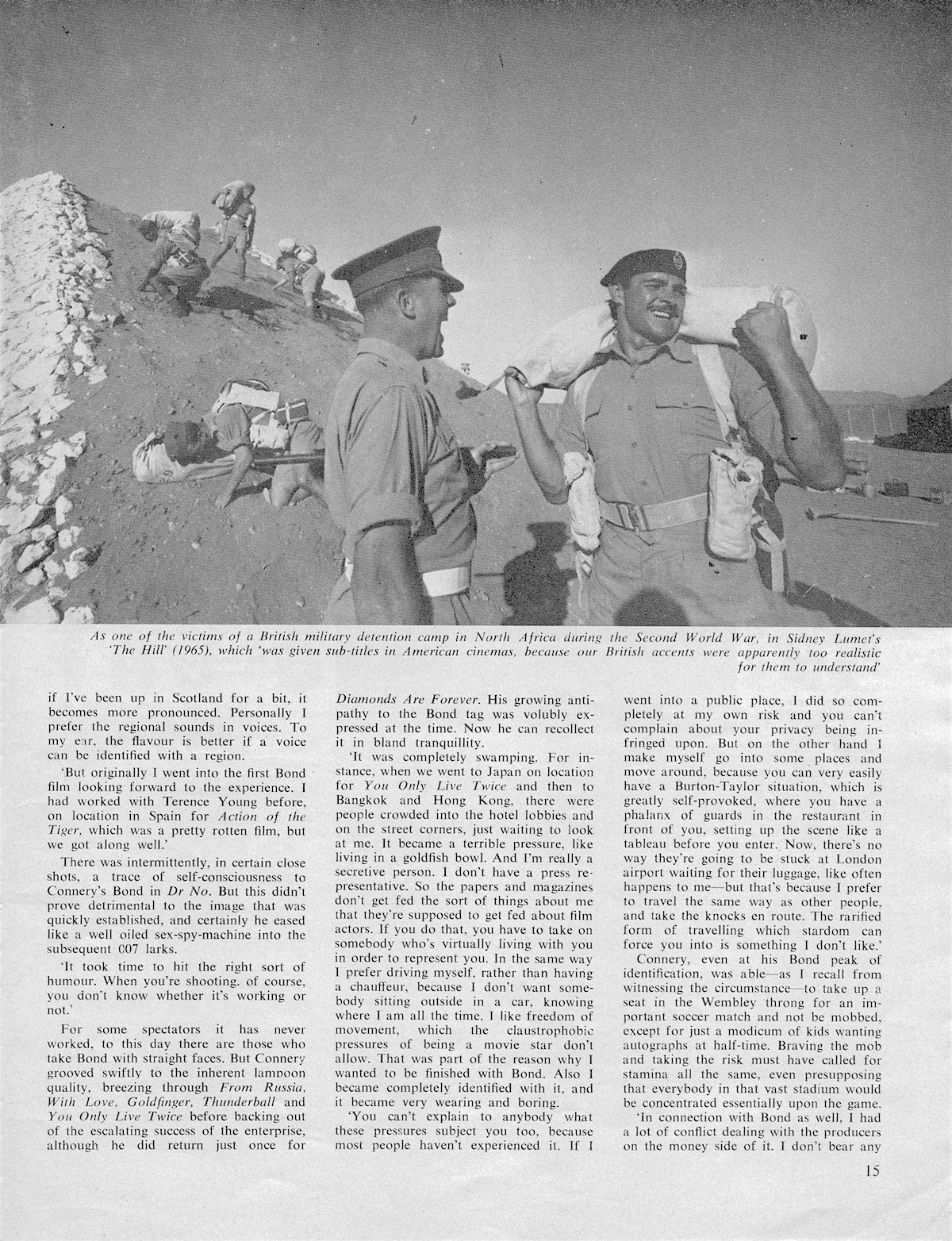 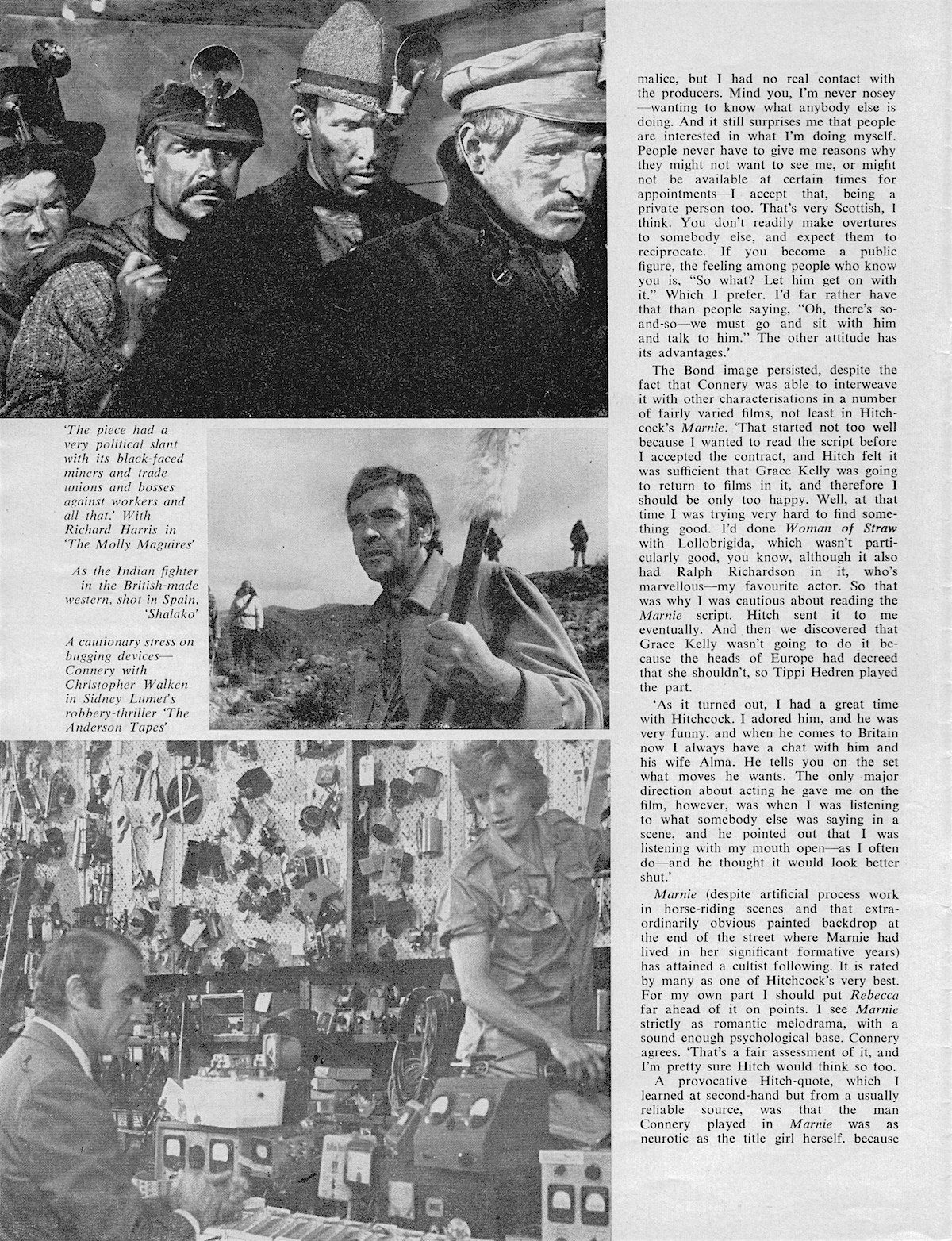 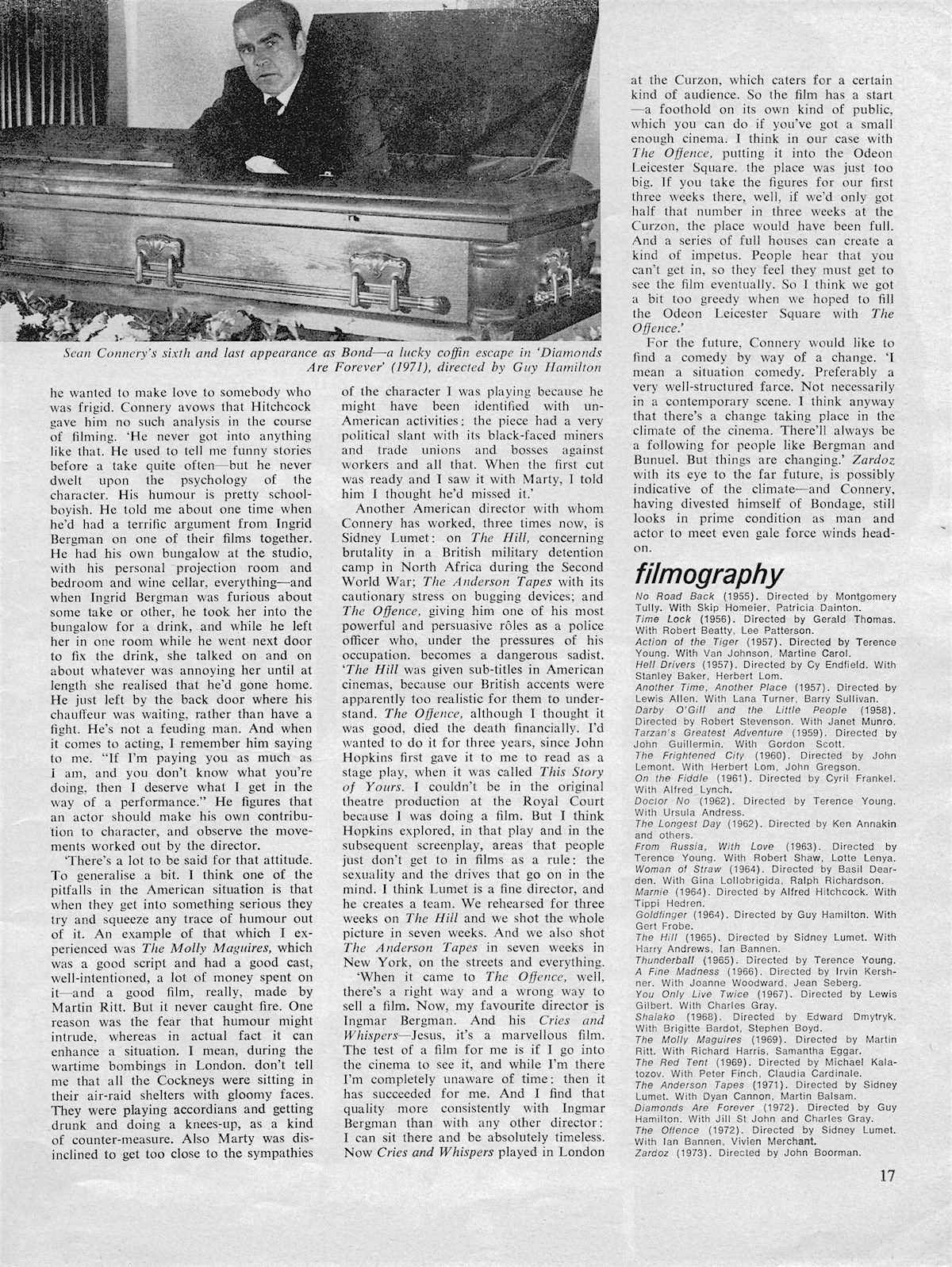