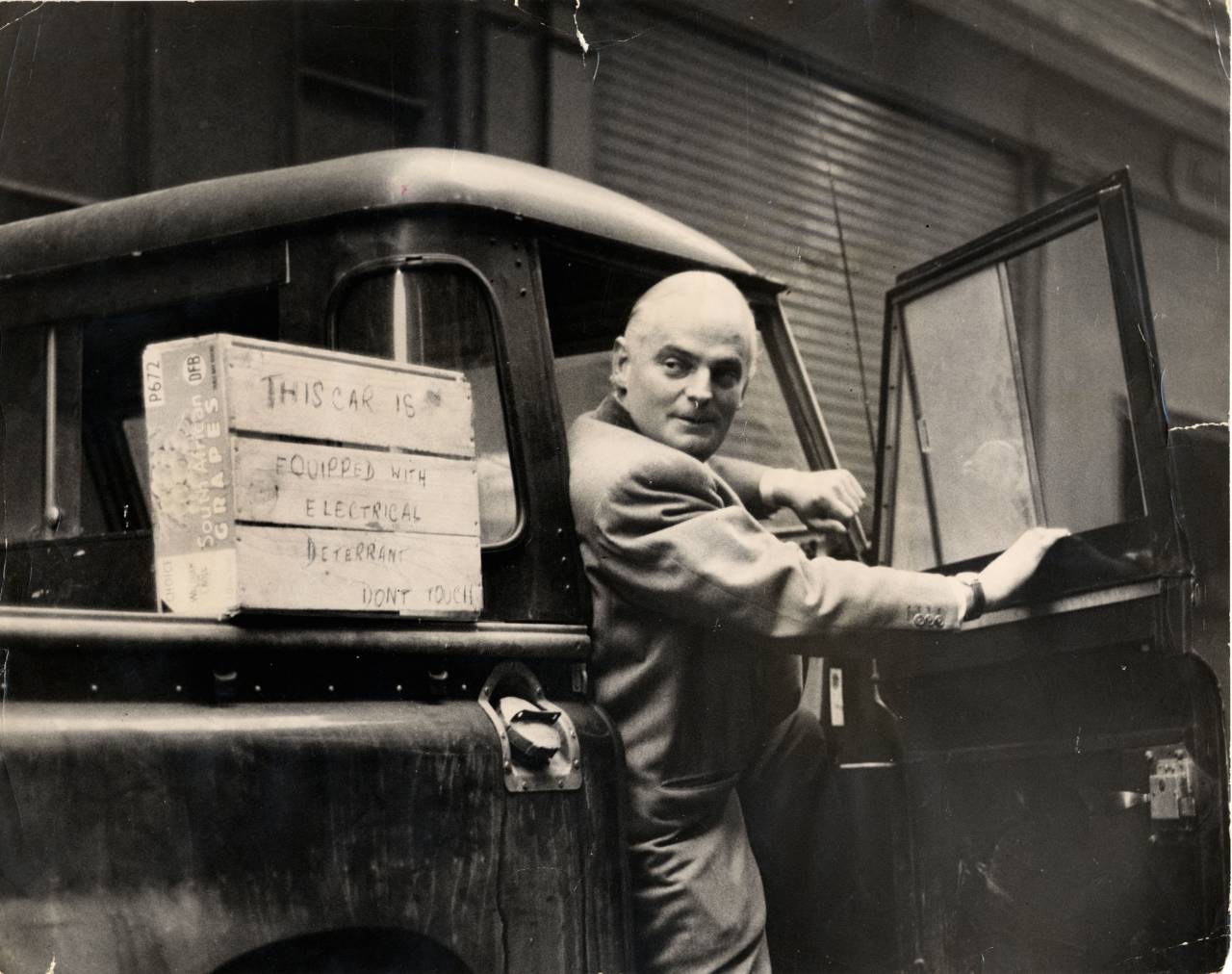 On February 23 1963 Peter Hicks, a 40-year-old farmer and verteran of Bomber Command, drove from his home in rural Sussex to London, as he did whenever he wanted to deliver his produce for sale at Covent Garden wholesale market. (In later years he made the journey by ex-American Army helicopter). 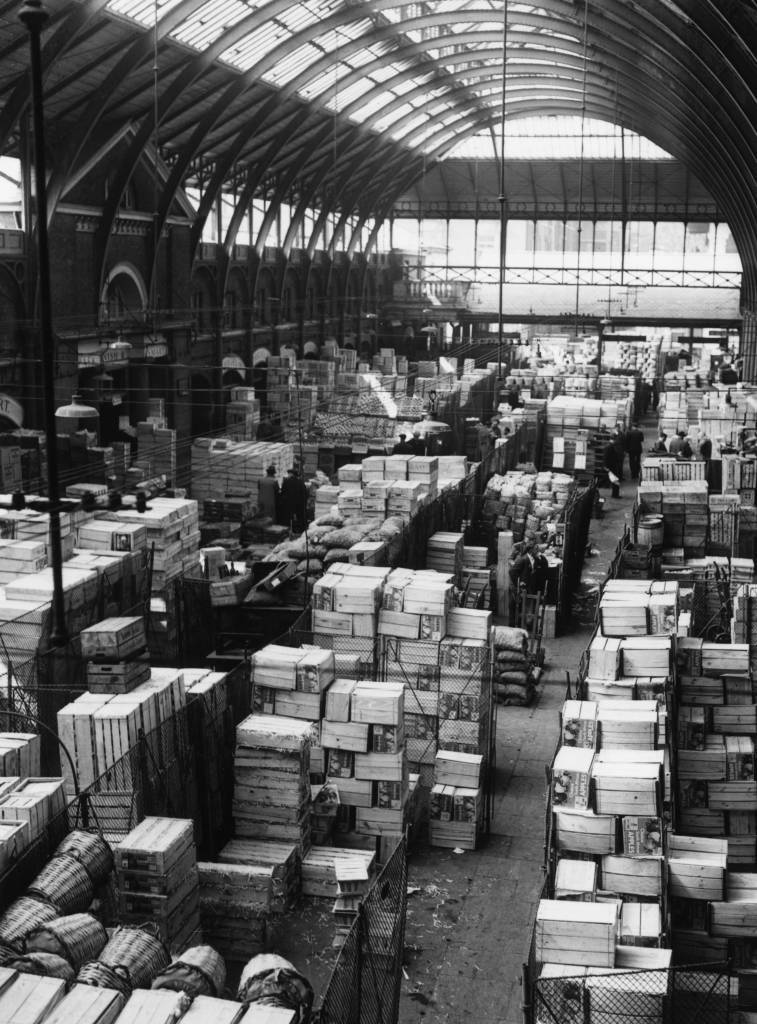 circa 1957: The warehouse at Covent Garden market in London. (Photo by Central Press/Getty Images)

Mr Hicks parked his Land Rover in Marylebone. A police constable passing by heard a ticking noise emenating from the vehicle. He looked inside. He touched the door. A 3,000 volt electric shock surged through his body. The officer called his sergeant over. He too touched the car. He too received a jolt.

Mr Hicks had been watching. He approached the policemen and revealed that he had wired his Land Rover to a device normaly used to electrify cattle fences. He saw his vehicle as his property. To keep wandering hands off, he had electrified it. His orginial enemy targets were thieves but he’d moved on to traffic wardens, who had been introduced to London on September 19 1960 and were costing him over £30 a week in fines. 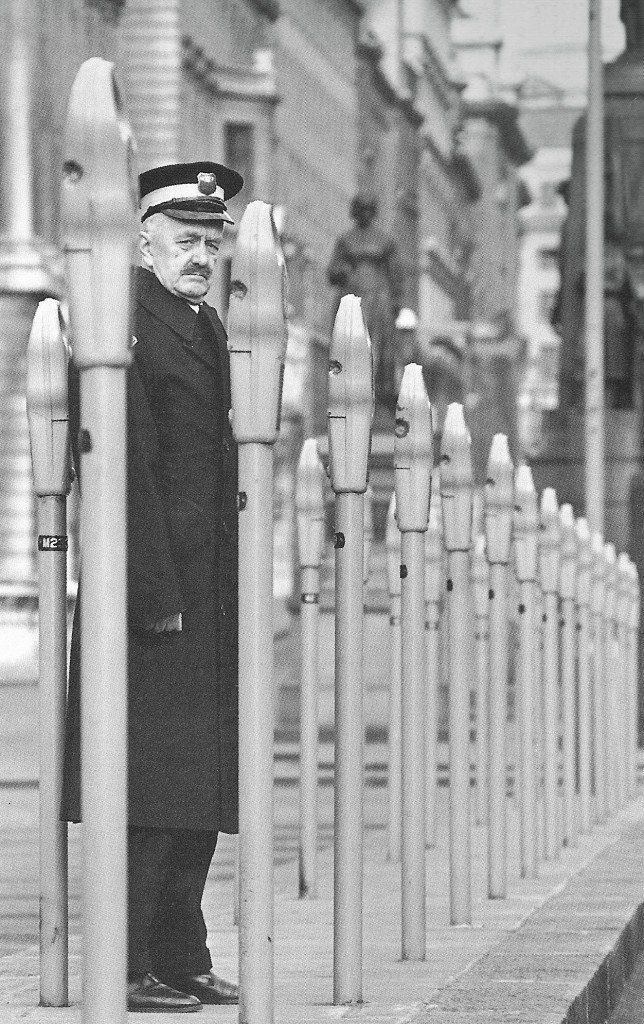 This is 1960 and a Metropolitan Police Traffic Warden poses amongst a forest of newly installed parking meters in Waterloo Place. Spotter: Leonard Bentley

Parking controls were introduced in 1958 – meters erected outside the old American Embassy on London’s Grosvenor Square. They marked the start of what is now a profitable business. Back then one hour’s parking in Mayfair cost 6d (2 1/2 p). Now you leave your kidney and first born.

In January 1960, the Guardian reported on the new wardens who manned the meters:

Mr Butler, the Home Secretary, yesterday gave firm promises that legislation will be introduced this session to authorise a ticket system of fines for traffic offences and the recruitment of a corps of traffic wardens.

Mr Butler explained that the ticket system would at first, for an experimental period, be limited to London, and would consist of “a standard penalty system whereby persons who commit certain traffic offences will be informed by means of a ticket attached to the vehicle that they may if they wish pay a standard penalty to a court as an alternative to being prosecuted.”

The system would be restricted to specified areas and any driver wishing to deny that he had committed an offence could withhold payment of the standard penalty and would then be proceeded against in the normal way.

The offences, Mr Butler said, would principally be parking offences and he emphasised that the system could not apply to moving vehicles. He was not able however to give a final answer on whether the standard fine would be the same for every offence irrespective of whether there had been any previous offences or not. 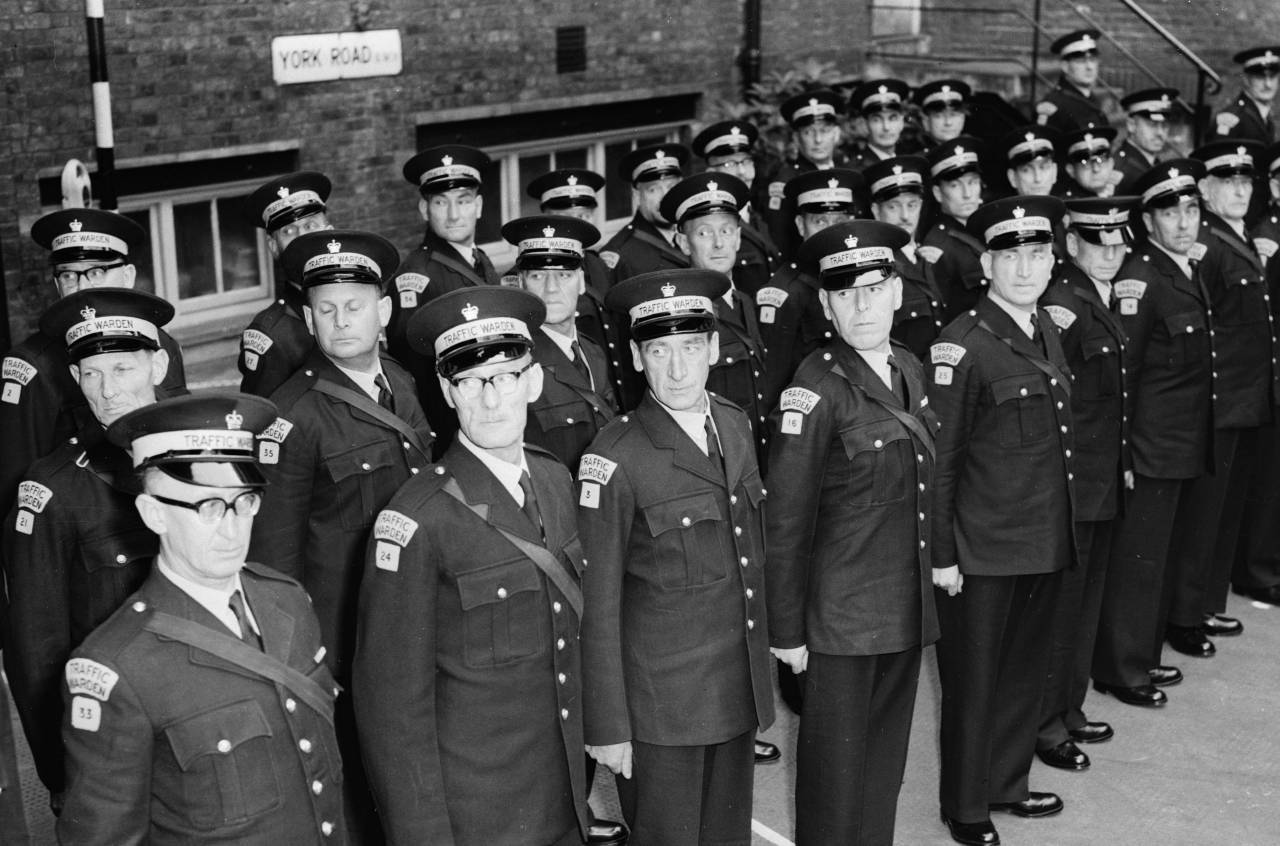 15th September 1960: Forty traffic wardens who are under training at Peel House, London are on parade. They are the first traffic wardens appointed under the Road Traffic and Roads Improvement Act, 1960 and are ready for duty after a fortnights training. (Photo by Ron Case/Keystone/Getty Images)

Mr Nigel Fisher welcomed the proposal, saying that most motorists would approve it and that it had worked well enough in other countries. To Mr Bellenger’s suggestion that a ticket system might cut across the right of the subject to be presumed innocent until he is proved guilty, Mr Butler put forward a strong denial. He felt that a driver’s right to go to court if he wished preserved the liberty of the subject.

Mr Sydney Silverman wanted to know if there would be a safeguard to make sure that a man who denied guilt and excercised his right to go to court would not pay a greater penalty than the standard penalty. To that Mr Butler did not give a direct answer but agreed that it was a very important refinement to which he would pay attention. Mr Patrick Gordon Walker from the Labour front bench added that a Court should not be told when a motorist had refused to pay by ticket, and Mr Butler felt that this was an even greater refinement. 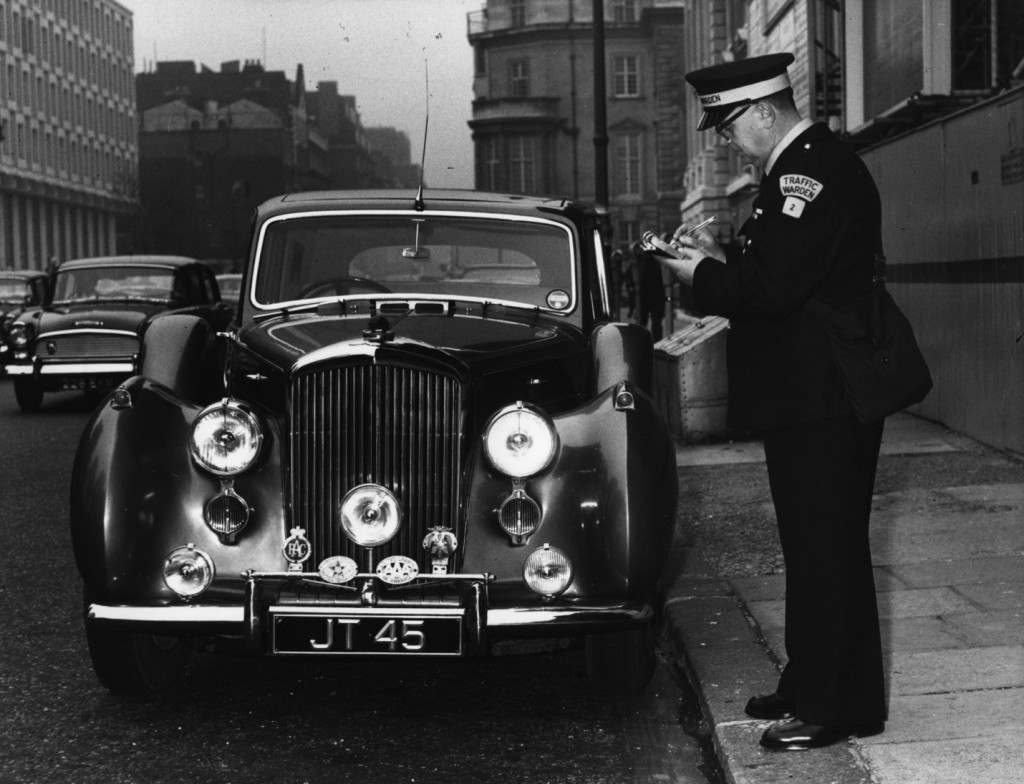 On September 19 1960, the very first ticket was issued to Dr Thomas Creighton, who was answering an emergency call to a West End Hotel to help a heart attack victim. The medic’s Ford Popular was ticketed, though there is a happy ending – he was let off the £2 fine. It is not known how many of the other 343 recipients of tickets on that day also escaped payment.

Back to Mr Hicks, then, who wanted these new traffic cops to leave his property well alone. If he could have some fun in the process, all to the good. As his son recalled:

“He actually used to deliberately drive around and park his Land Rover in the West End and then go and sit in a pub or a restaurant. He’d get himself a nice window table and park very obviously – and illegally – outside. He and his mates would sit there having a drink or two and a nice bit of lunch watching them trying to ticket his vehicle.” 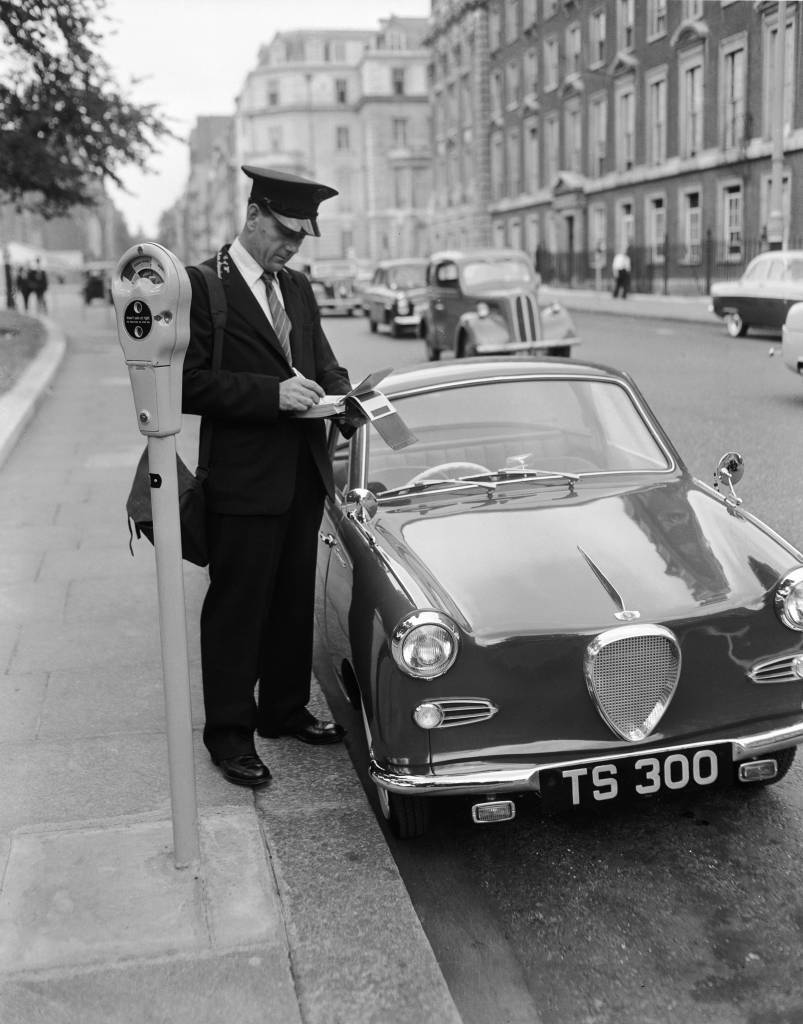 A traffic warden writing out a ticket for a car which had not paid the parking fee on the parking meter scheme in Mayfair, London. (Photo by Reg Birkett/Getty Images)

As well as a Land Rover, Mr Hicks operated a fleet of 50 lorries, which, when in London, were parked so that their metal bumpers touched one behind the other, thus channelling electricity from the Land Rover he parked at convoy’s rear. Touch any of his vehicles and you got a shock.

He told the Press:

“Until somebody tells me what law I’m breaking I shall keep up my private war. I have plenty more of these lovely machines. I’ve watched quite a few wardens cop it, trying to put a ticket on my truck. They gave up in disgust – and shock! [it’s] harmless, apart from a bit of a flash and a nasty jog”.

It would never last. Police disarmed the car and impounded the device. They wanted to charge Hicks with assault, but nine months later the matter was dropped.

All good fun and games.

But what was life like for the wardens? Did they deserve to be cooked?

This film from 1968s tells us something more:

There was some evidence to suggest that traffic wardens were humans. This video from 1969 shows Rick Liddell traffic warden, who also worked as a cartoonist.

In the 1970s, traffic wardens were part of the uniformed street scene, sold as voodoo dolls for all the family to enjoy holding over the hob: 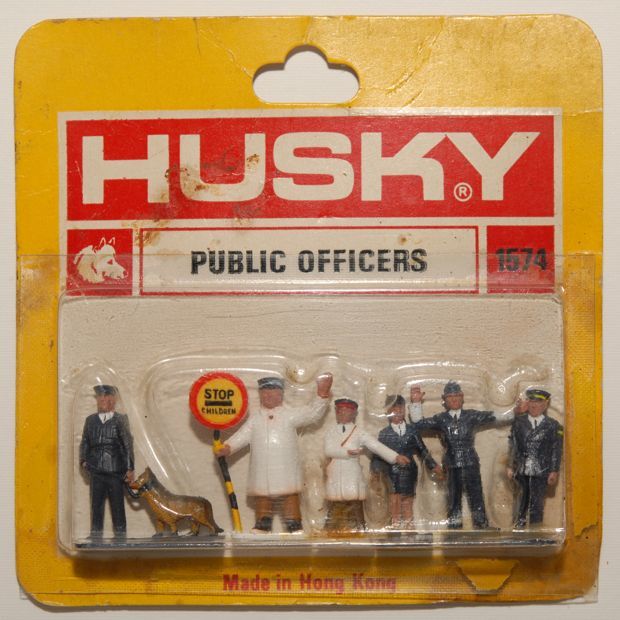 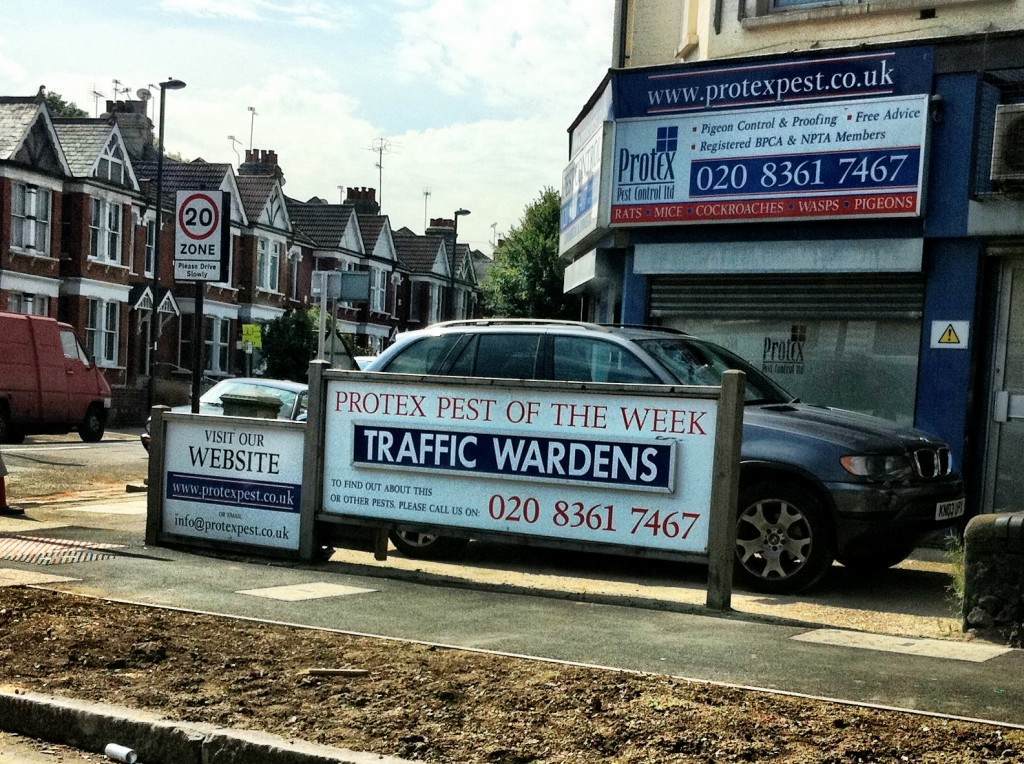 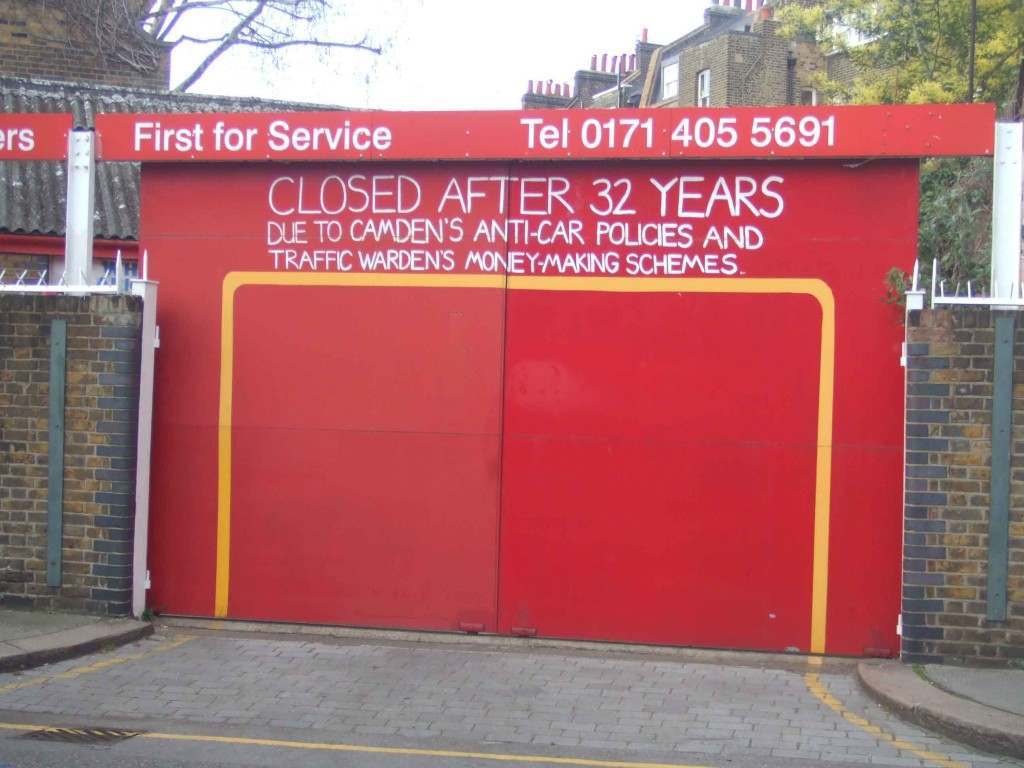 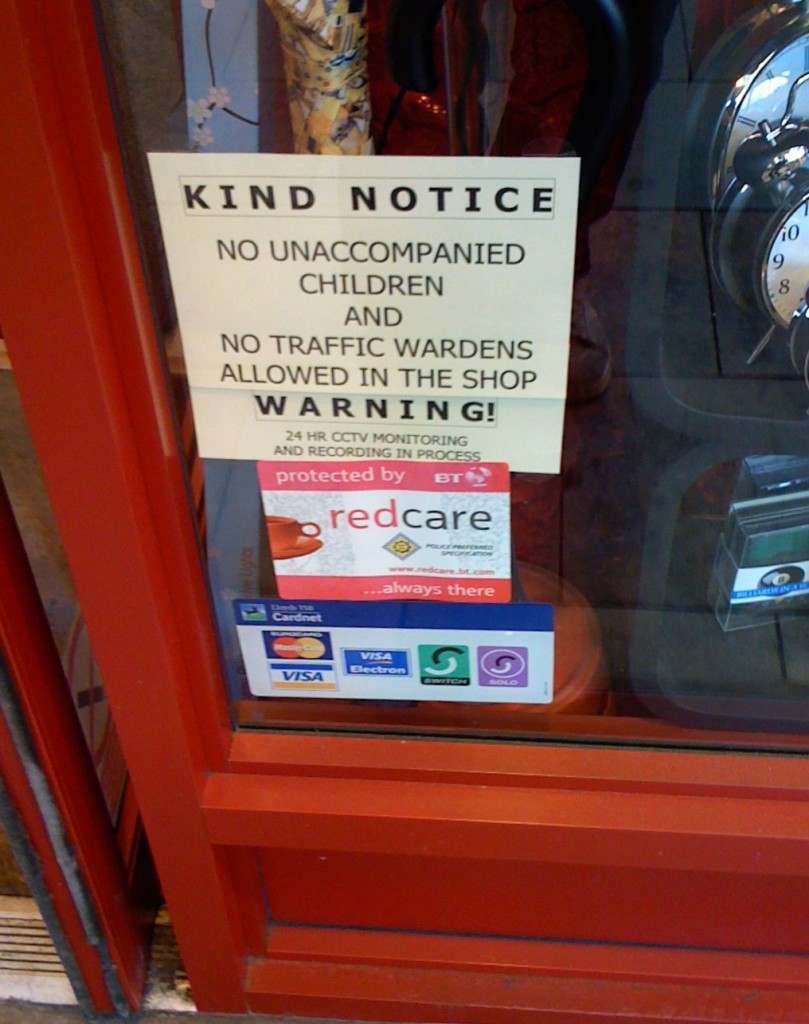 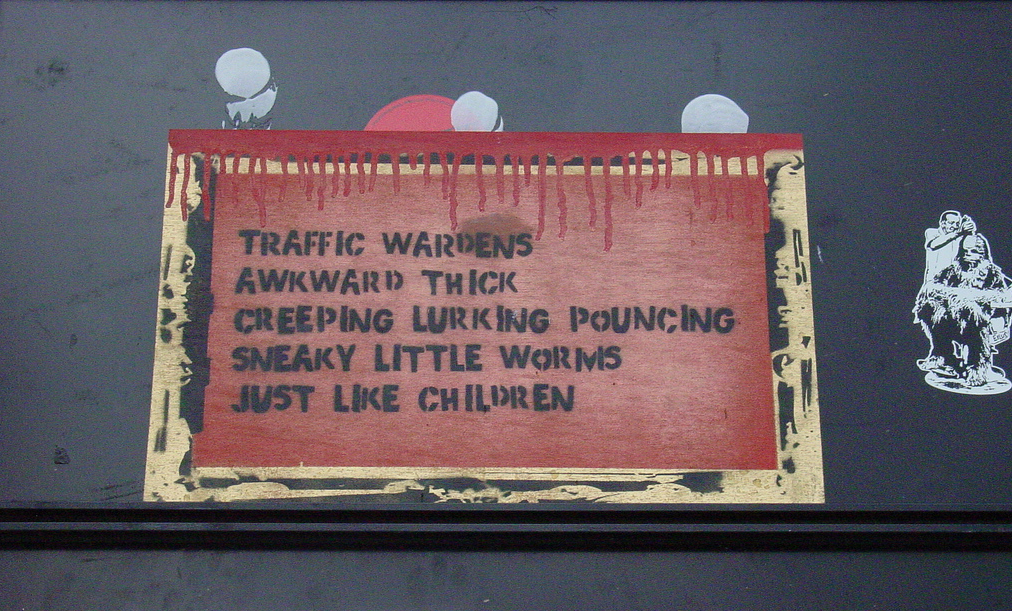