When it comes to phallic imagery, it doesn’t get much more blatant than the image of a woman riding a rocket. It doesn’t take a Freudian psychologist to pick up on the less-than-subtle innuendo. For whatever reason, this imagery abounded in mid-century America. I suppose it was the natural outcome of a male dominated nation infatuated with the space program. Babes on rockets – it’s the perfect symbol of the American Dream. 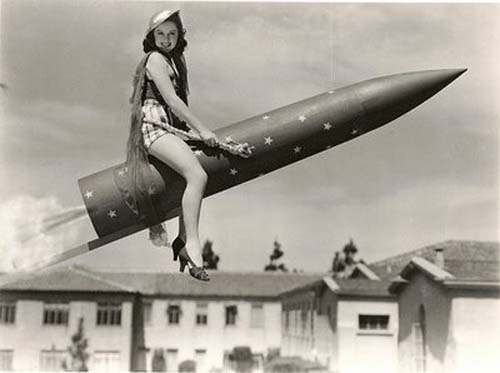 I’ve been accused of seeing sexual imagery where it’s not, but you’ve got to admit there’s something naughty going on here. 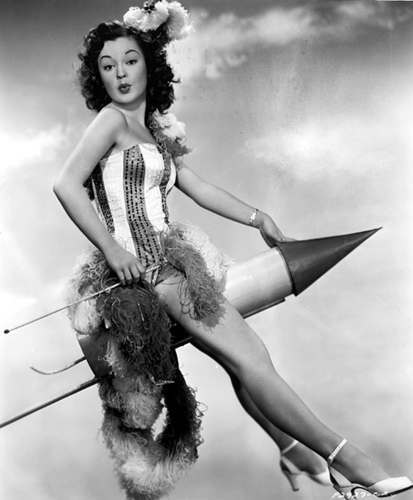 The “O-Face” takes things to a whole new level of dirtiness. We tend to think the midcentury populace was oh-so-very wholesome. Truth is, they weren’t living in a Disneyland of naiveté; and they would have known full well what these pictures represented. 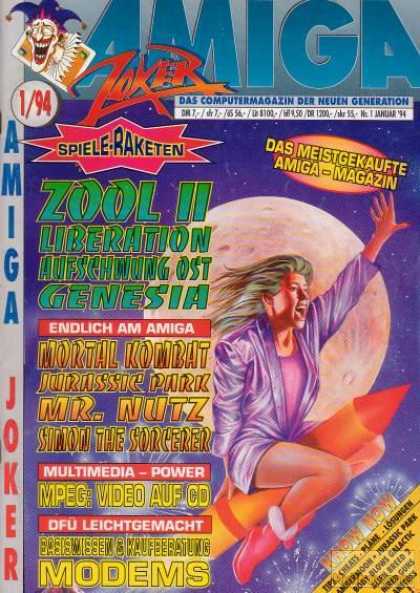 Fast forward a few decades, and the same exact imagery is still going strong. This chick doesn’t sport the O-Face, but she’s having an exciting ride nonetheless. 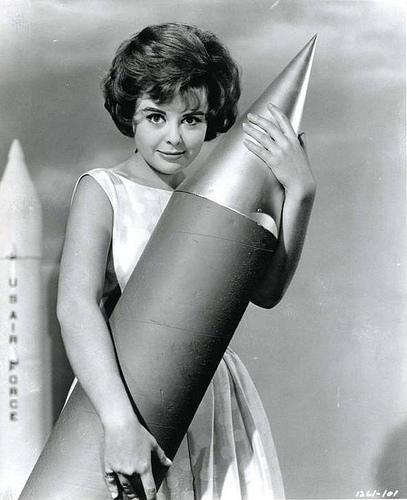 This retro-babe is literally cradling her beloved rocket. Be gentle with the tip, miss. It’s very sensitive. 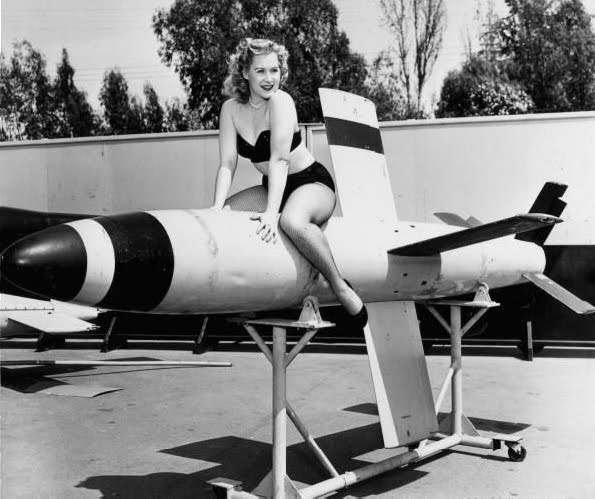 Read up on the age-old image of the witch and her broom and you will find that it also has its origins in sexual/phallic subtext. In this regard, you might consider the chick-on-rocket symbol the modern version of a very ancient tradition. 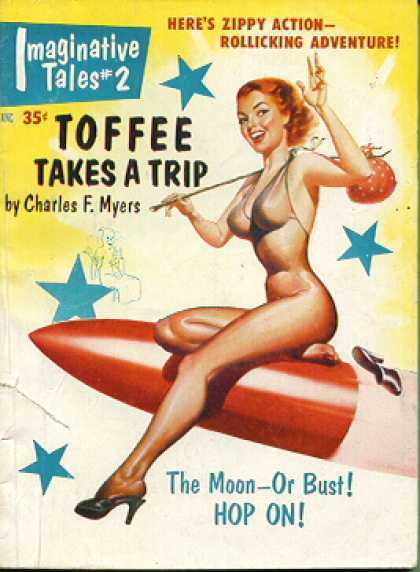 Imaginative Tales (1954), a pulp for adults and kids alike, features Toffee taking a trip…. on a massive penis….. wearing a see-through body-stocking. 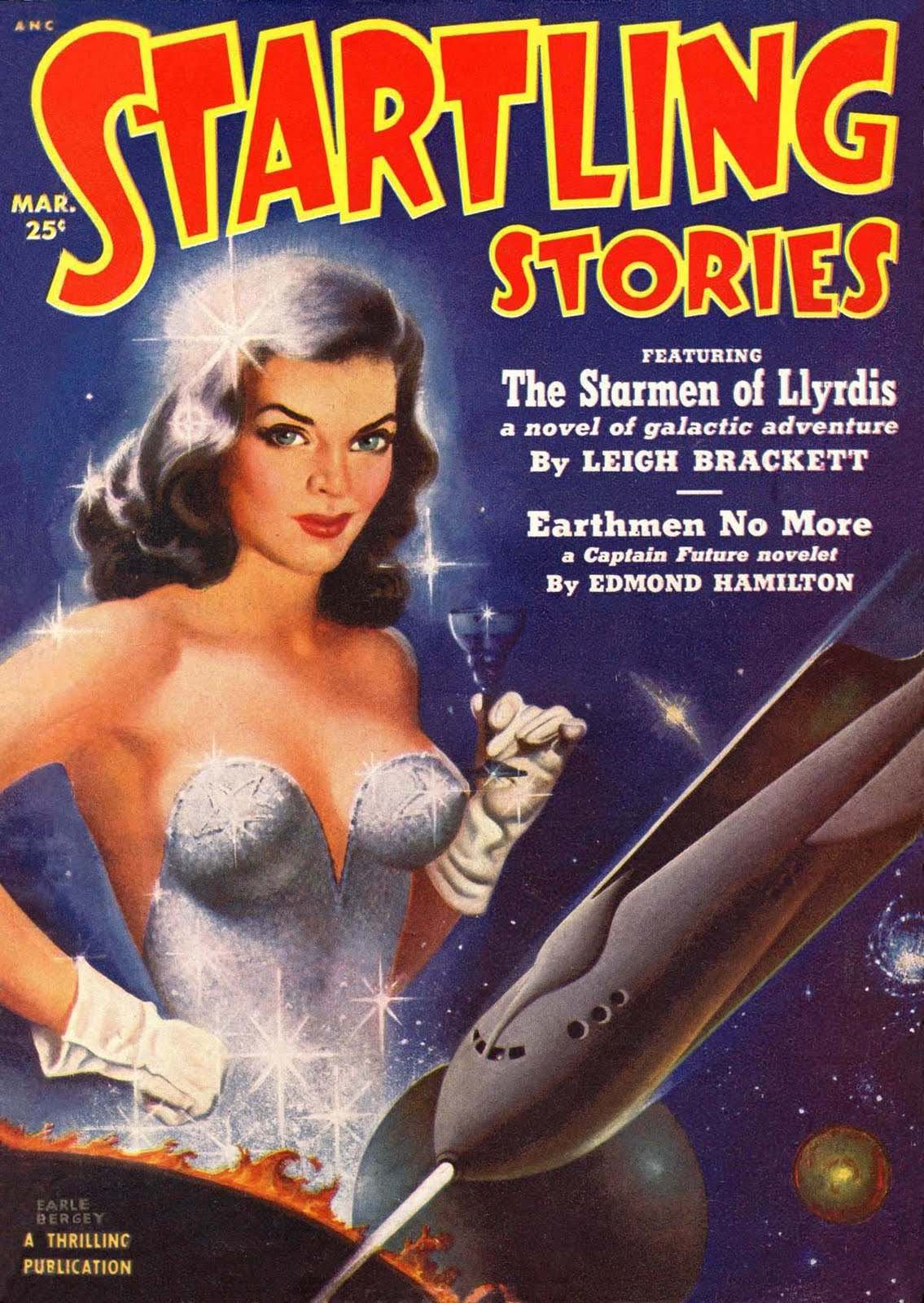 This Star Maiden sips her space-age cocktail as the rocket ship charts a trajectory to her nether regions. All purely innocent, I’m sure. 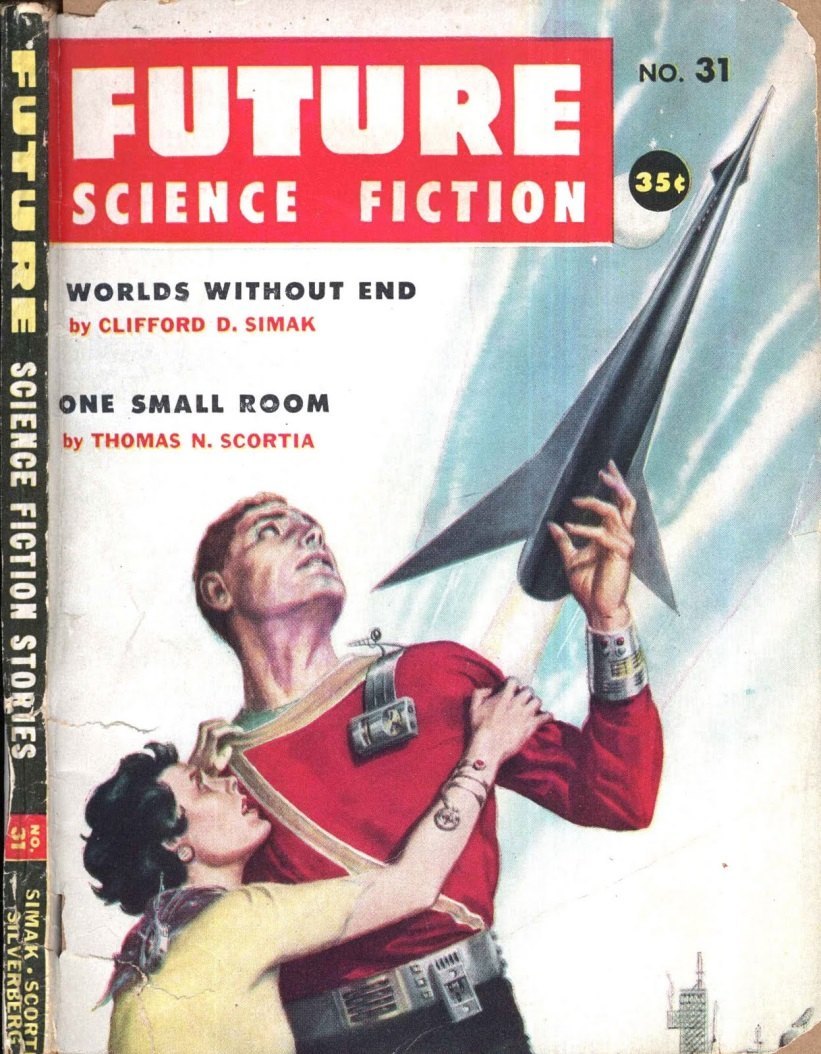 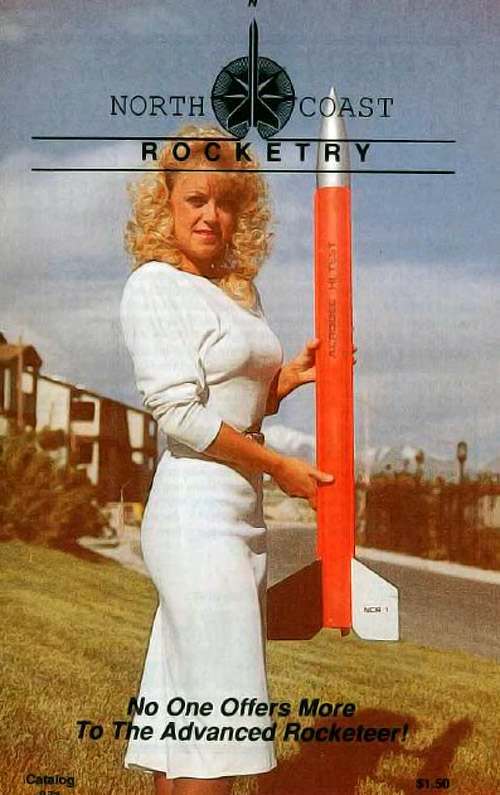 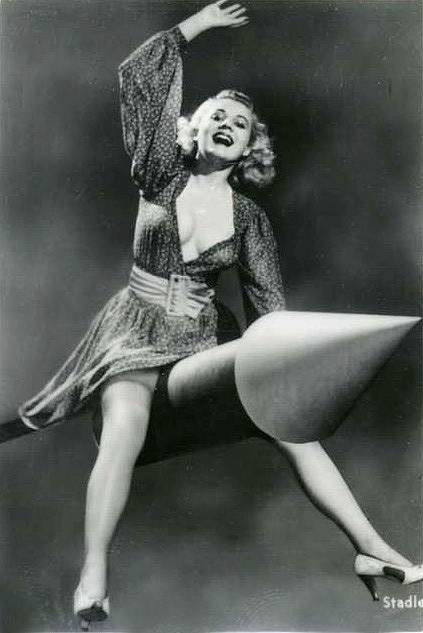 Nothing the least bit sexual going on here. Just having a completely innocent time with a massive rocket between my legs. 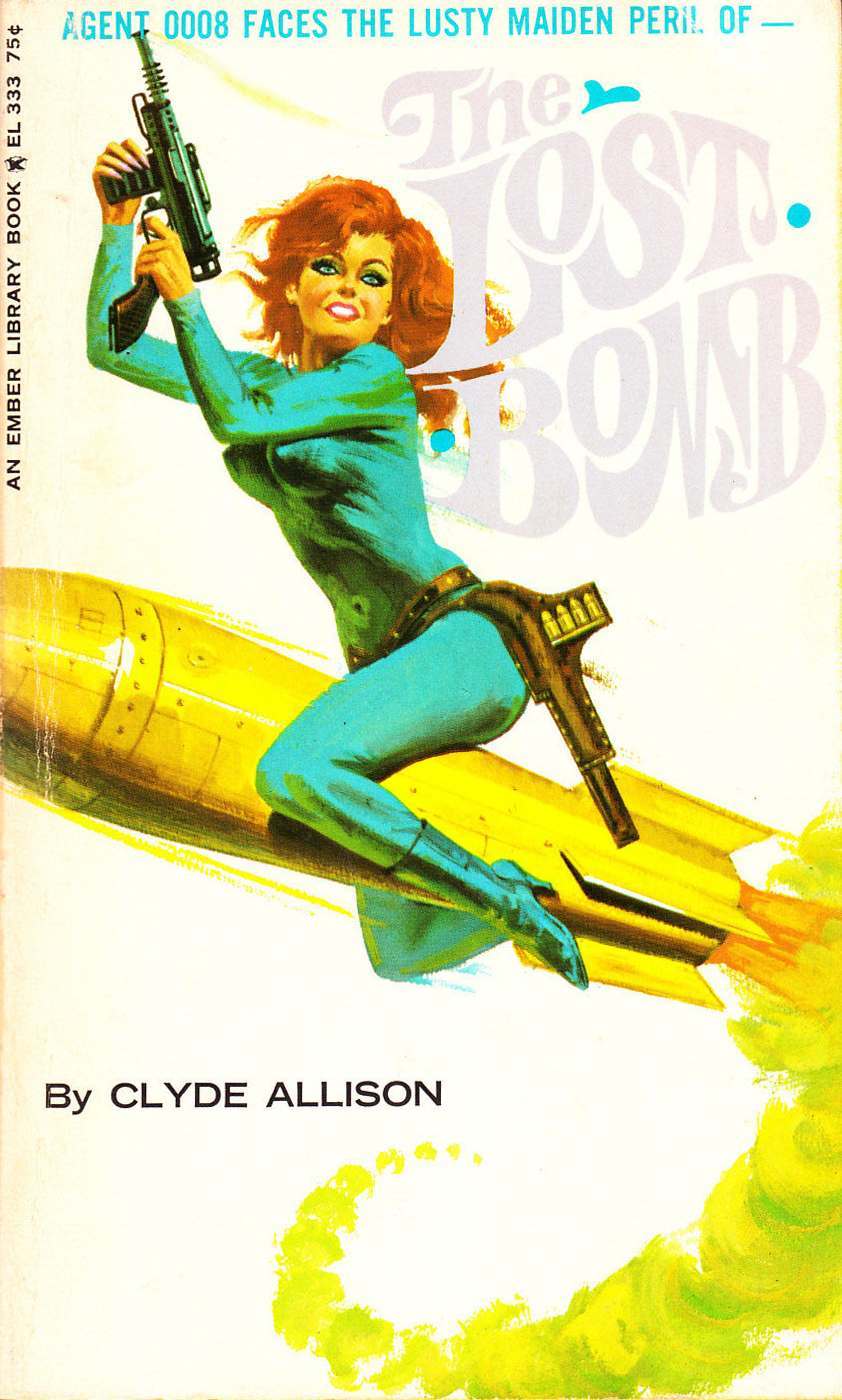 The rocket (or alternatively the missile or spacecraft) was a potent sexual image often repeated in years past which you simply don’t see anymore. We don’t have the same enthusiasm for the space-age as before, and the fine art of having fun by laying things between the lines isn’t as appreciated as it once was. It’s just a little bit too “cheesy” for a world far too cynical to enjoy.

Not here on Flashbak. Here a woman and her rocket shall always be appreciated. 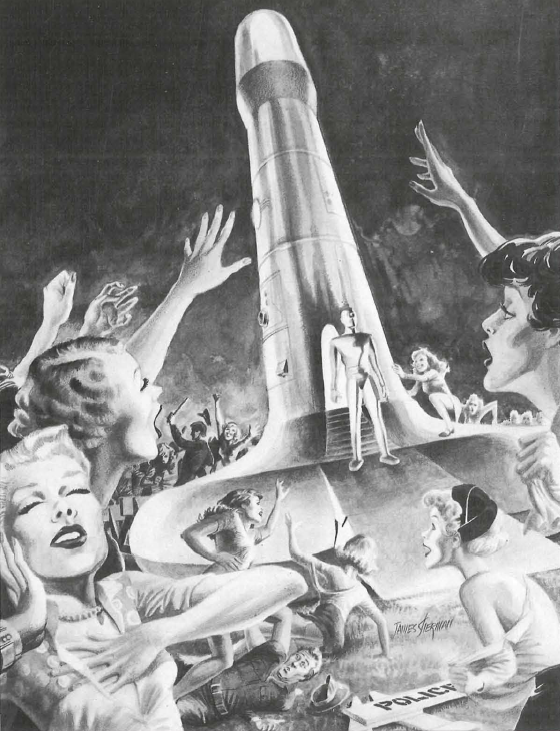