London’s Soho is synonymous with the business ends of sex. It’s seedy and seductive, if you like neon-lit, rubber-insulated sex against the clock. This vibrant red-light zone is not for everyone. It never was. In 1960, Reverend Vernon Mitchell toured Soho’s thriving sex venues. His job was to help determine what should be censored.

These photographs record his journey. 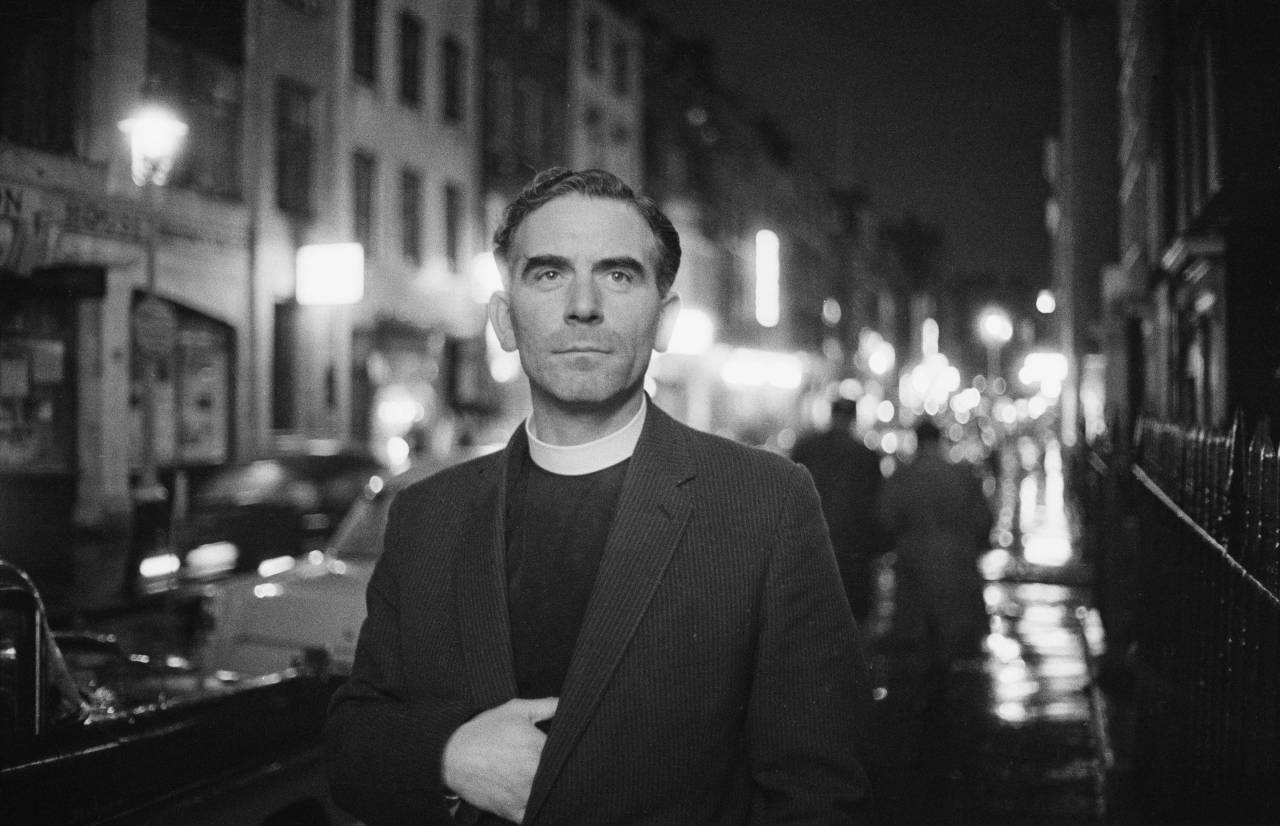 A 1960 report in The Spectator sets the scene:

There are probably three hundred strip clubs prospering in Britain, two hundred of them in London alone, though an accurate figure is elusive because they flit as elusively as the bulbs on a pin-table. But enough of them have opened in the past three years to have caused the Public Morality Council to brand London `the Mecca of the strip-tease industry,’ and to have induced vague whinnies of disapproval from bishops and members of the House of Lords. Still, many of us are unwilling to accept unquestioningly the stric- tures of bishops and watch committees.

The clubs – “flea-pits” – were members only. In 1960 an estimated 250,000 members had paid around £1 for instant lifetime membership. Sadly, a majorty of clubs would change name days or weeks after your first visit thus rendering that membership void.

Was sex on the menu? Possibly. The Street Offences Act 1959 made it an offence for a common prostitute (whether male or female) to loiter or solicit in a street or public place for the purpose of prostitution. So. Come inside, dear. Out of the cold, cocker. It’s only a quid.

Oh, and as for that aforesaid Public Morality Council, know this:

The London Council for the Promotion of Public Morality, later the Public Morality Council, was formed in 1899 to combat vice and indecency in London and to assist in their repression by legal means, already existing but neglected. Its members included representatives of the Church of England, Roman Catholic and Non-conformist churches and of the Jewish faith, leaders in education, medicine and charitable associations and others supporting reform. It continued until 1969, concentrating latterly on opposition to sexual immorality and pornography in general and in the theatre, cinema, radio and television. Its functions were taken over by the Social Morality Council, constituted in 1969.

Permissiveness must not be permitted. 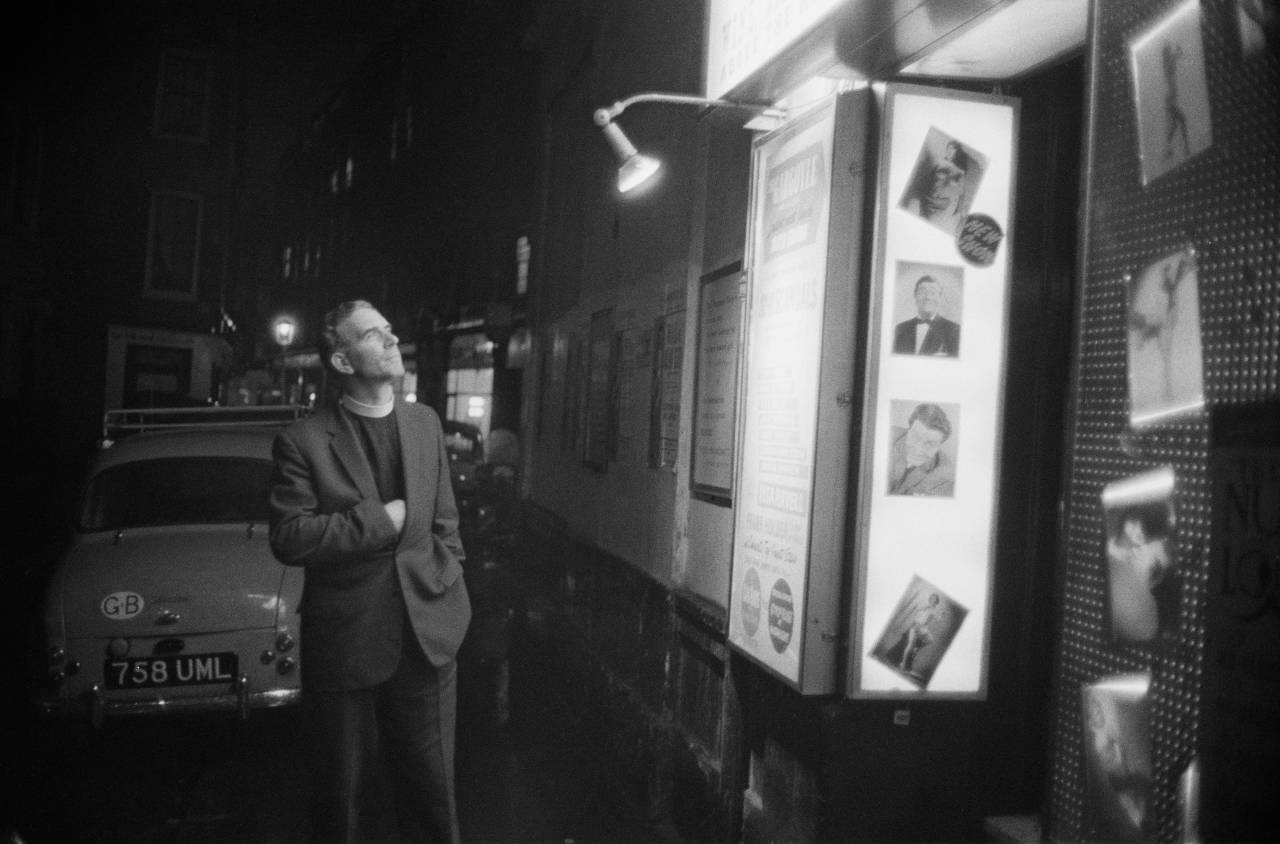 The reverend Vernon Mitchell inspects the images outside a strip club to determine what should be censored, Soho, London, 1st November 1960. (Photo by Peter Dunne/Daily Express/Hulton Archive/Getty Images)

A brunette is revealed upon a spotlit divan. A spider appears to have spun a few wisps of black gossamer here and there across her pallid beefiness: black quasi bra, perfunctory black panties, black fishnet stockings, black thread of suspender belt. She is unfolding a letter—pre- sumably from her lover, as it instantly spurs her into a randy thresh. She bites her lower lip. Her eyes gyrate. She thrusts her hands inside her panties; then kneads her breasts; with the dogged deliberation of a pre-breakfast physical-jerker she writhes out of the gossamer in a solitary sexual charade of half a dozen postures and speeds.

If you imagine it, they will come:

Apart from this standard attraction, each club has its own frequently changed lip-wetting novelty numbers that cater for all tastes. You can see a naked girl strangled with a stocking. You can see girls seduced by a gorilla and a demon (The Devil and the Virgin’). married to Frankenstein’s rhonster, or making love to a life-size male statue. You can see girls pretending to conceal themselves with fans, veils and plumes, but also girls bare to their pudenda, for the convention of G-string or diamante star are old hat in this brave new underworld. 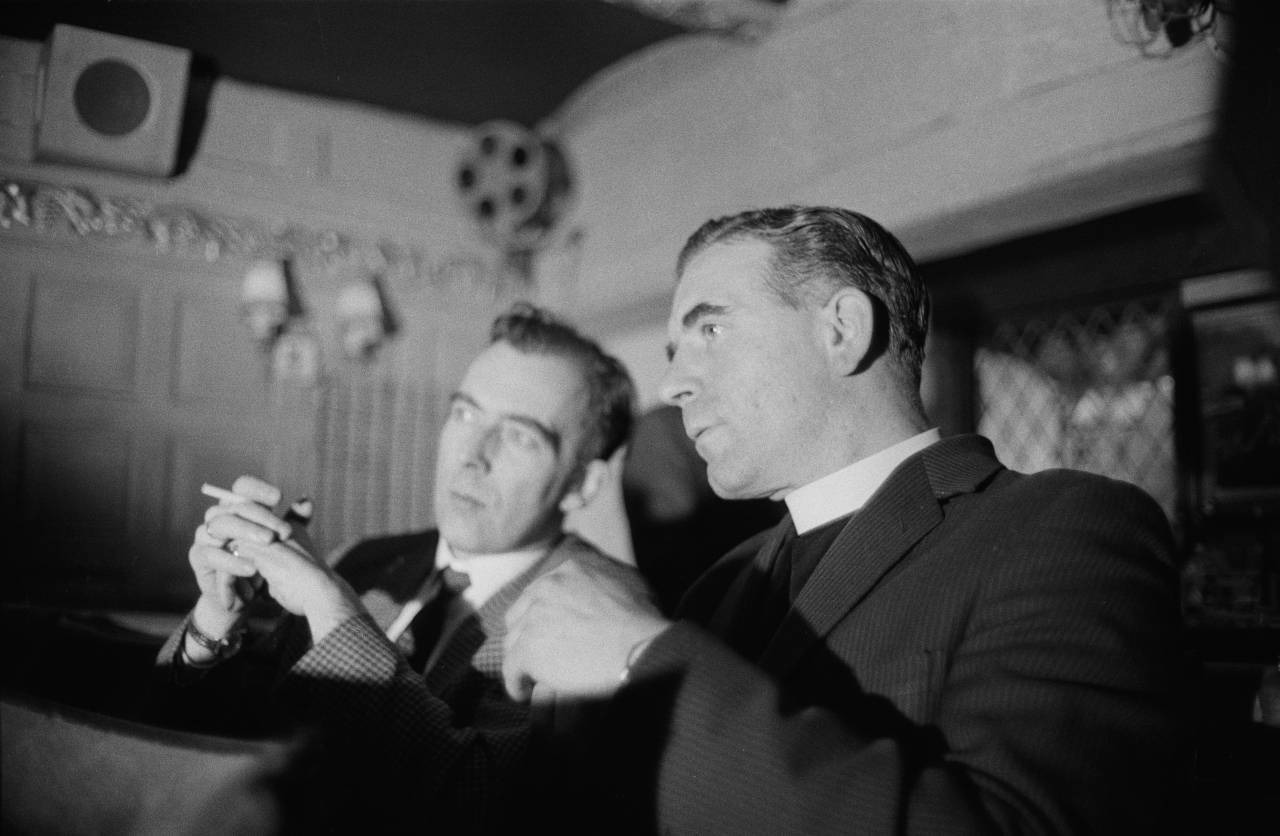 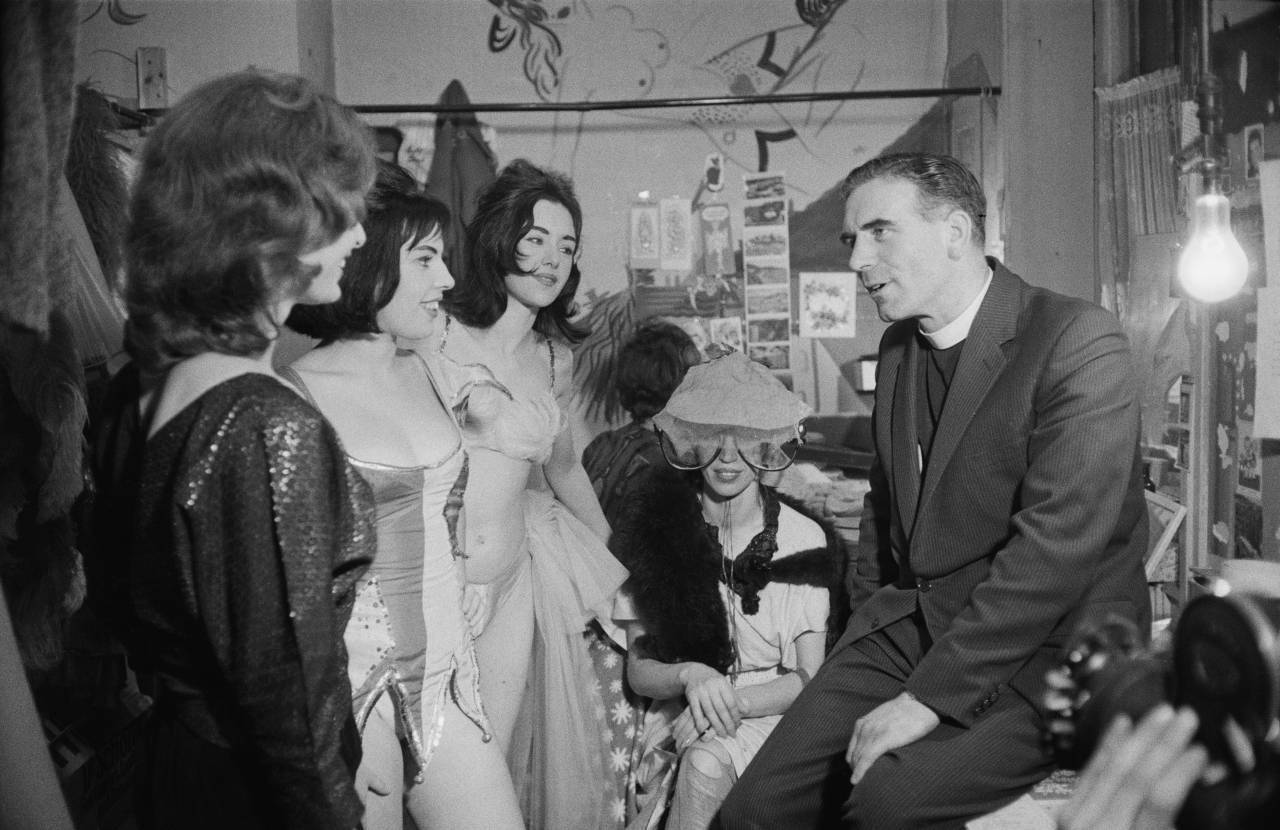 The reverend Vernon Mitchell talks to women at a strip club as part of a process to determine which segments of the show should be censored, London, 1st November 1960.