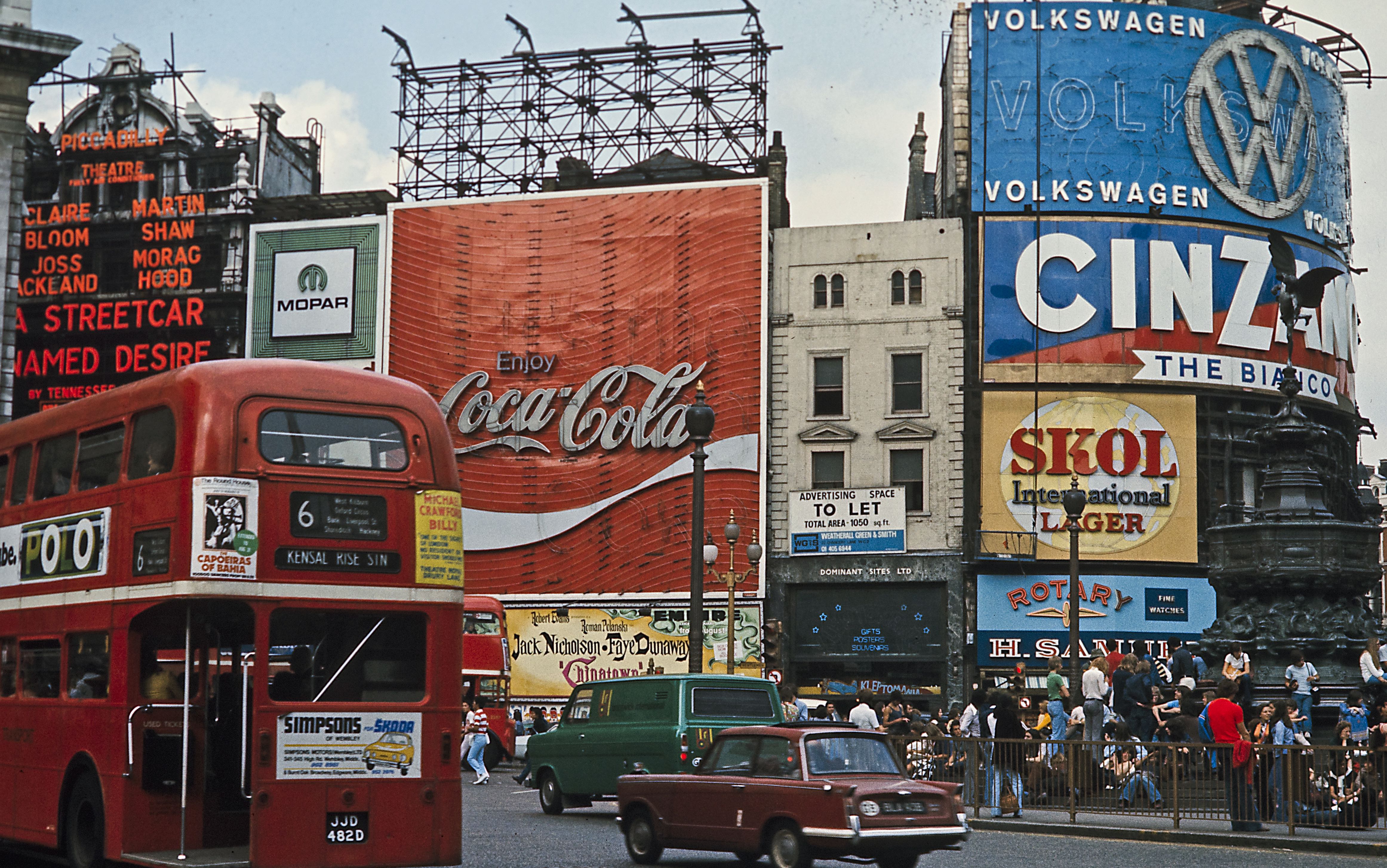 Piccadilly Circus has long been one of London’s best known and popular landmarks. A ‘centre of gaiety’ as one 1930s guide book put it, where thousands and thousands of people and almost as many cars ‘struggle in vain for freedom’. Piccadilly Circus is so popular it’s used to describe anything that’s busy. Even electrons and protons. In 1932 Lord Rutherford, the father of nuclear physics, described the passage of the neutron into the nucleus of the atom ‘like an invisible man passing through Piccadilly Circus. His path can be traced only by the people he has pushed aside.’

It’s proximity to innumerable West End shops, theatres, cinemas and restaurants has meant that that Piccadilly Circus has always been popular with Londoners and tourists alike. But it’s also been an important meeting place and destination for the misfits of society. Especially after dark. There’s always been a slight sense of sex and the night about Piccadilly Circus.

Lit by the glow from the illuminated advertisements, first seen in 1908 advertising Perrier and now a hi-res swirling digital screen, people over the years have congregated around Sir Alfred Gilbert’s Shaftesbury Memorial Fountain. It’s  more commonly known as Eros and less commonly known to be made out of aluminium (an expensive and technologically innovative choice when originally cast in 1893). Gilbert spent five years considering ideas to celebrate the charitable life of the Earl of Shaftesbury, a philanthropist and social reformer, eventually deciding upon a fountain topped by the winged Anteros, the ancient Greek symbol of Selfless Love. In fact Gilbert described Anteros as showing ‘reflective and mature love, as opposed to Eros or Cupid, the frivolous tyrant.”  But because of the bow and the naked young boy everyone thought the statue was Eros (known to the Romans as Cupid) and the frivolous Eros it has remained ever since. The young boy was modelled by Angelo Colarossi from Shepherd’s Bush who can be seen, along with his dad, modelling in Frederick Leighton’s ‘And the Sea Gave Up the Dead Which Were In It’ at the Tate Britain.

The name was the right choice. The Baedecker guide for London once described Piccadilly Circus as “for the pleasure seeker, the centre of London’ and for over two centuries Piccadilly Circus and its immediate environs has been synonymous with sex-work in all its forms and anything but ’selfless love’. Dostoevsky visited London in July 1862 and wrote about the area: At night prostitutes crowd several streets in this quarter by the thousands’ ‘here are sparkling, expensive clothes and near rags and extreme differences in age gathered all together’ ‘mothers who were bringing their young daughters into the business. Little girls around twelve years of age take you by the hand and ask you to go with them’.

During World War 1 prostitution in the area vastly increased to meet the demand of servicemen home from the front. The newspaper the Weekly Despatch wrote about a young officer walking to Piccadilly Circus from a hotel in Regent’s Street was accosted sixteen times, mostly by teenagers and children. Despite the war ending in 1918 prostitution increased if anything between the wars and many of the restaurants were magnets to pimps and their prostitutes. The management of the Trocodero restaurant opened by Lyons in 1896 instructed its staff that “if a lady alone should gain admittance she must immediately be surrounded by screens”. 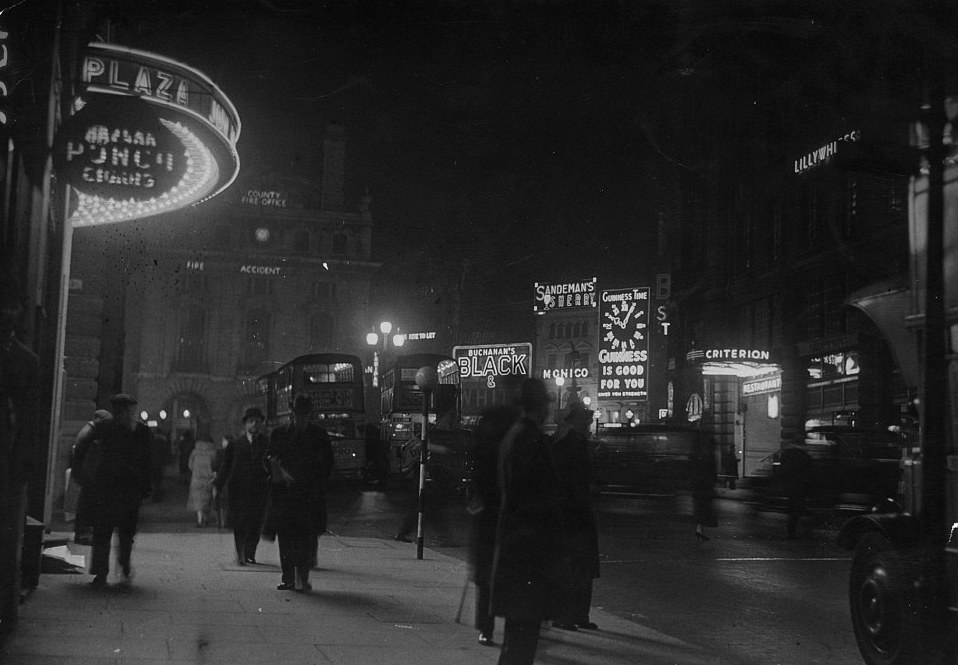 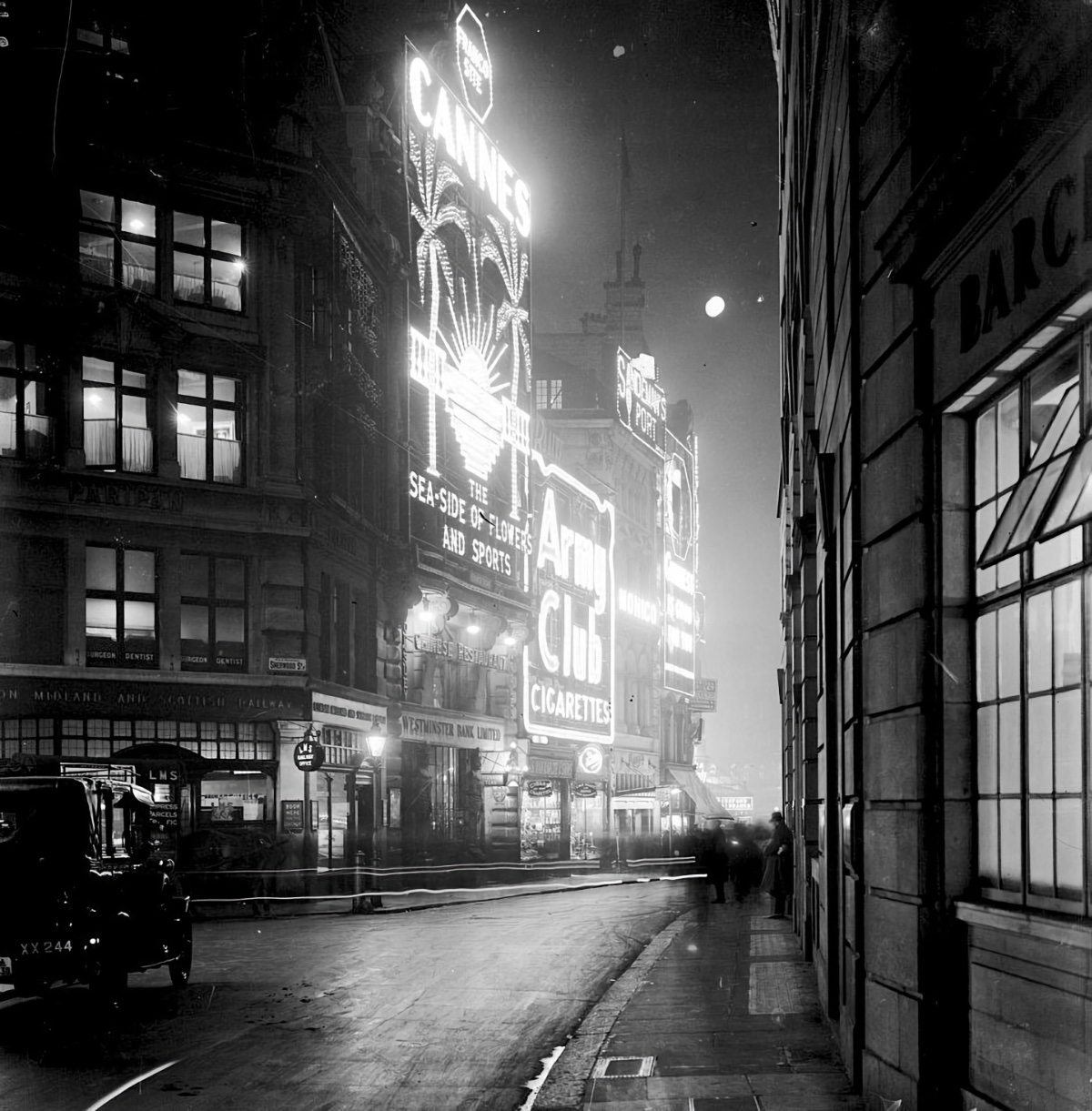 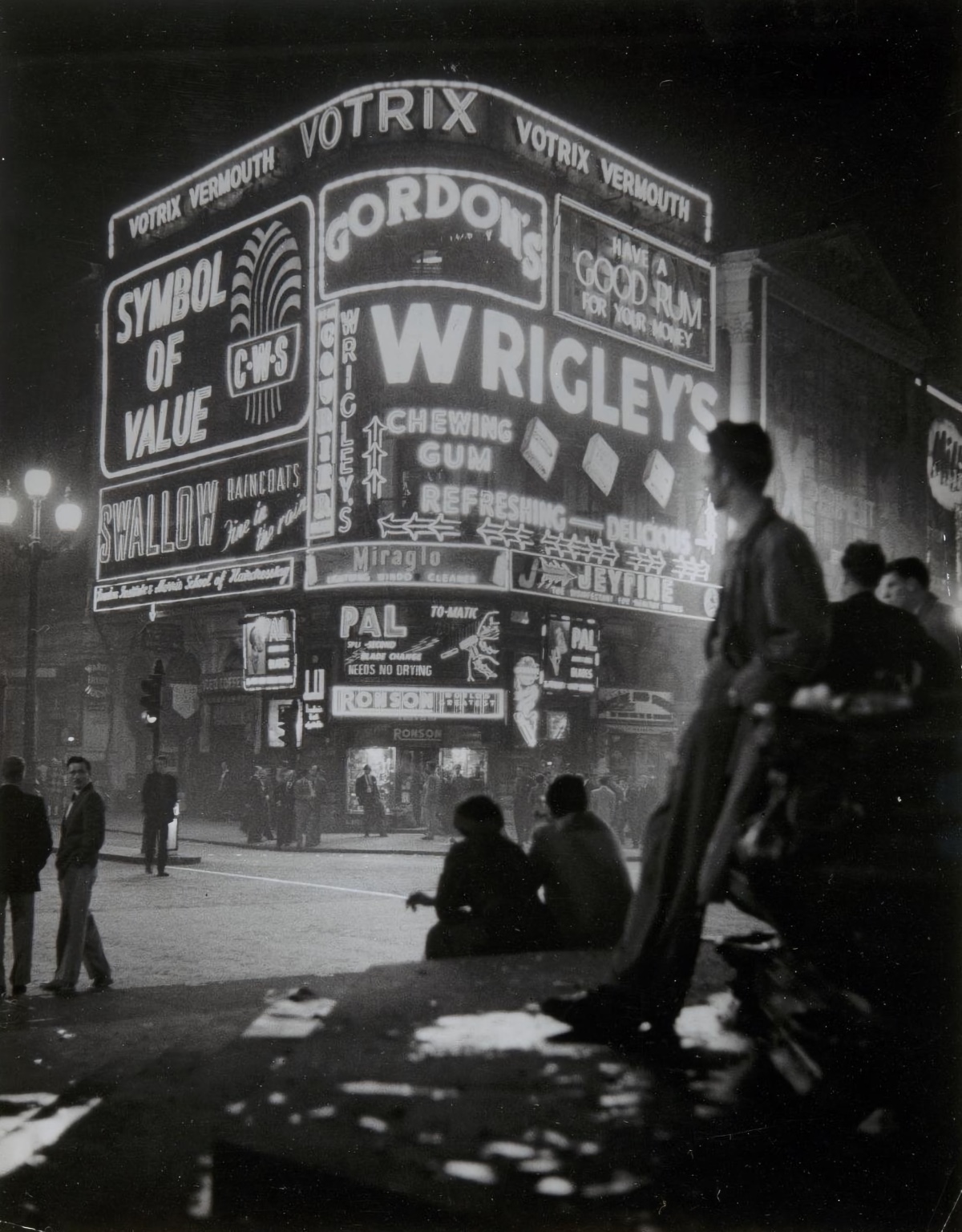 By WW2 with the arrival of the relatively well-off American GIs the number of prostitutions was said to have doubled. It was almost impossible to police with the black-out. The writer Thomas Burke wrote a few years earlier that “the street is more private than the home” and there was a reason the American soldiers’ still wore their great coats even in the summer.

The women became known as ‘Piccadilly Commandos’ and were so numerous and persistent the foriegn office thought them a possible threat to Anglo-American relations. In September 1943 the head of civil defence in London, Admiral Sir Edward Evans, wrote to Air Vice Marshal Sir Philip Game, the Commissioner of the Metropolitan Poice writing of ‘vicious debauchery’ and that ‘American soldiers are encourage by these young sluts, many of whom should be serving in the forces”.

A decade after the end of WW2 the American biologist Alfred Charles Kinsey who had founded the Institute for Sex Research at Indiana University, visited the West End in 1955 and counted about 1000 prostitutes plying their trade.

The Circus or the “Dilly” was also the centre of gay London especially after the relative clean up of the area around Leicester Square in the 1920s. Thomas Burke wrote of the Cafe Royal next to Piccadilly Circus on Regent Street in 1922:

Here and there may be seen queer creatures…an hermaphroditic creature with side-whiskers and painted eyelashes…Male dancewrs who walk like fugitives from the City of the Plain. Hard-features ambassadors from Lesbos and Sodom.

According to Matt Houlbrook’s Queer London Piccadilly Circus became the focus and centre for queer London until the 1950s (young gay men started to prefer the new fangled coffee shops opening around this time) including the lesbian Lily Pond on the corner of Coventry Street and Piccadilly Circus, the Regent’s Palace Hotel, the Criterion (known by many as the ‘Witches Cauldron’ or the ‘Bargain Basement’ and  and the Trocadero. But even in the 1930s these almost openly gay places were if not being closed down becoming less ‘cosmopolitan’. The famous men-only Long Bar in Lyons’ Trocadero and where, in 1932 the Evening Standard reported that the Maitre’d introduced the popular song ‘Make Way, Boys – Here Comes a Sailor’. Incidentally Maurice and Frederick Monbiot, grandfather and great-grandfather of the journalist and environmental campaigner George Monbiot were restaurant manager and Maitre’d of the Trocadero around this time)  closed in 1937 to be replaced by the Salted Almond Cocktail Bar which, shockingly, admitted women. The Trocadero closed for good in February 1965. 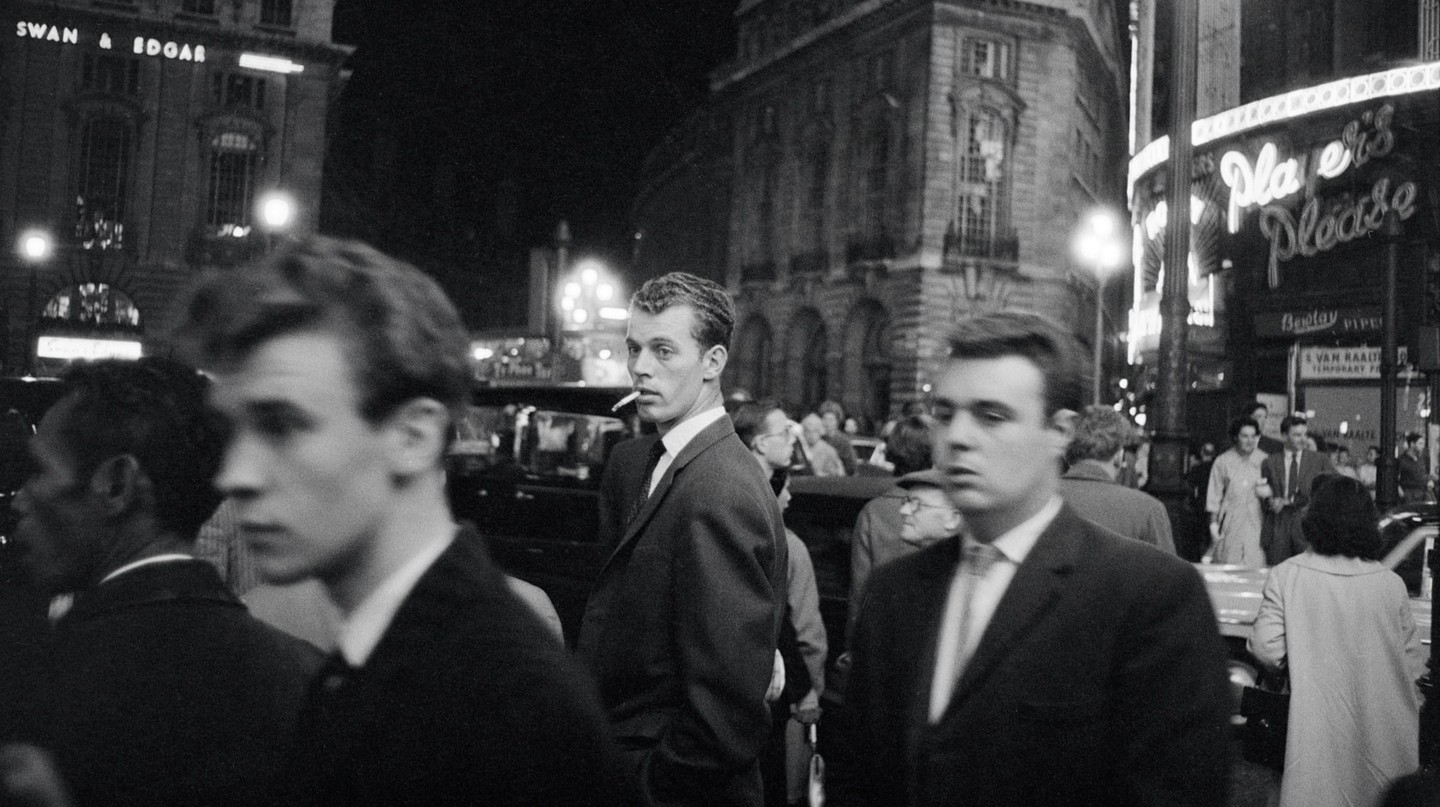 In the 1950s and 1960s Piccadilly Circus was also the centre for drug addicts especially heroin addicts. Sheila Hancock talks about acting at the Criterion Theatre in the 1960s: “The first hazard was climbing over the recumbent drug addicts who used the stage door entry to inject the heroin prescription they got from the all-night Boots in Piccadilly Circus (it became 24 hours in 1925 and was next door to the Criterion). Once inside you descended to a gloomy catacomb where only the mice were healthy on their diet of theatrical greasepaint, which they shared with the cockroaches. There wade not windows, so the outside would ws banished once you’d descended into hell. We actors had to resort to oxygen inhalers on matinee days to keep us bubbling energetic for our merry romp.”

At the beginning of the 1960s there were about 200 known herion addicts in the whole country – most of whom got their drugs from the Boots 24 hour chemist on Piccadilly Circus. There would be a queue at midnight everyone holding their prescription dated the next day. The heroin, prescribed by sympathetic doctors, was pure pharmceutical grade and came by the grain consisting of six tablets called ‘jacks’ (where ‘jacking up comes from). New syringes and needles came with every ‘scrip’. The biggest drug dealer of the time was Boots the Chemist which is still there on Piccadilly Circus. 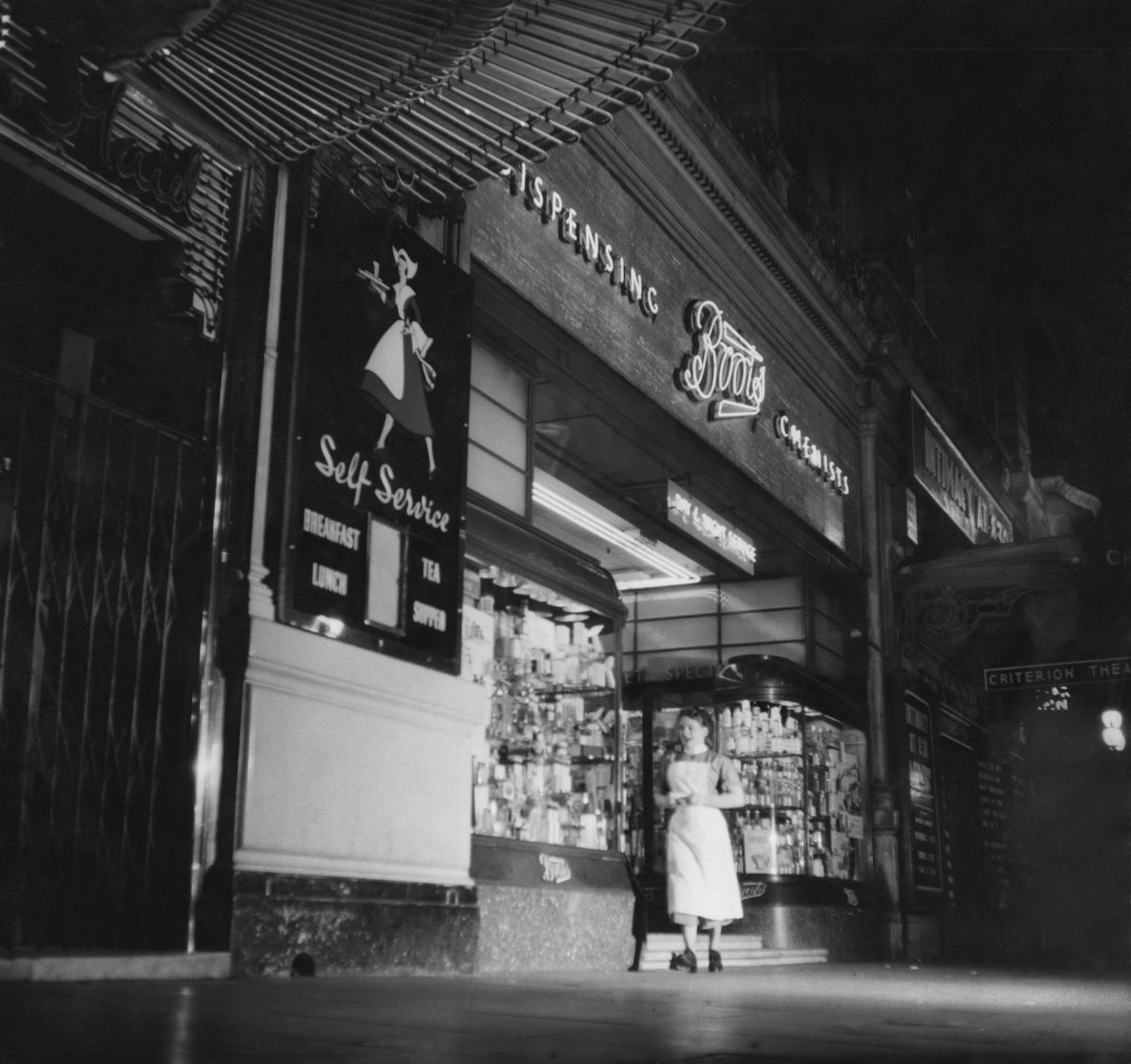 A nurse hurries from a late-night opening branch of Boots the Chemists with urgently needed drugs, Piccadilly Circus, London, 1955. The shop is next to the Criterion Theatre. (Photo by Popperfoto via Getty Images/Getty Images)

Although Piccadilly Circus has always been popular especially by many of the misfits in society. Not by everyone, however, Even Sir Albert Gilbert sculptur of ‘Eros’ had no appreciation of the site, at all and described it ‘as an impossible site, in short, upon which to place any outcome of the human brain, except possibly an underground lavatory!’

He wasn’t alone in his dislike and plans to either destroy it completely or change it beyond recognition has been happening ever since. After the death of King Edward VII in 1910 there were plans to clear the area and create a rectangular open space called King Edward VII Square with Eros replaced with the royal philanderer on a horse with an adjacent Shakespeare Memorial Theatre and a National Opera House. The First World War came along, as did the Second, and the asymmetrical chaos that made up Piccadilly Circus pretty well stayed the same. Until 1954 that is. 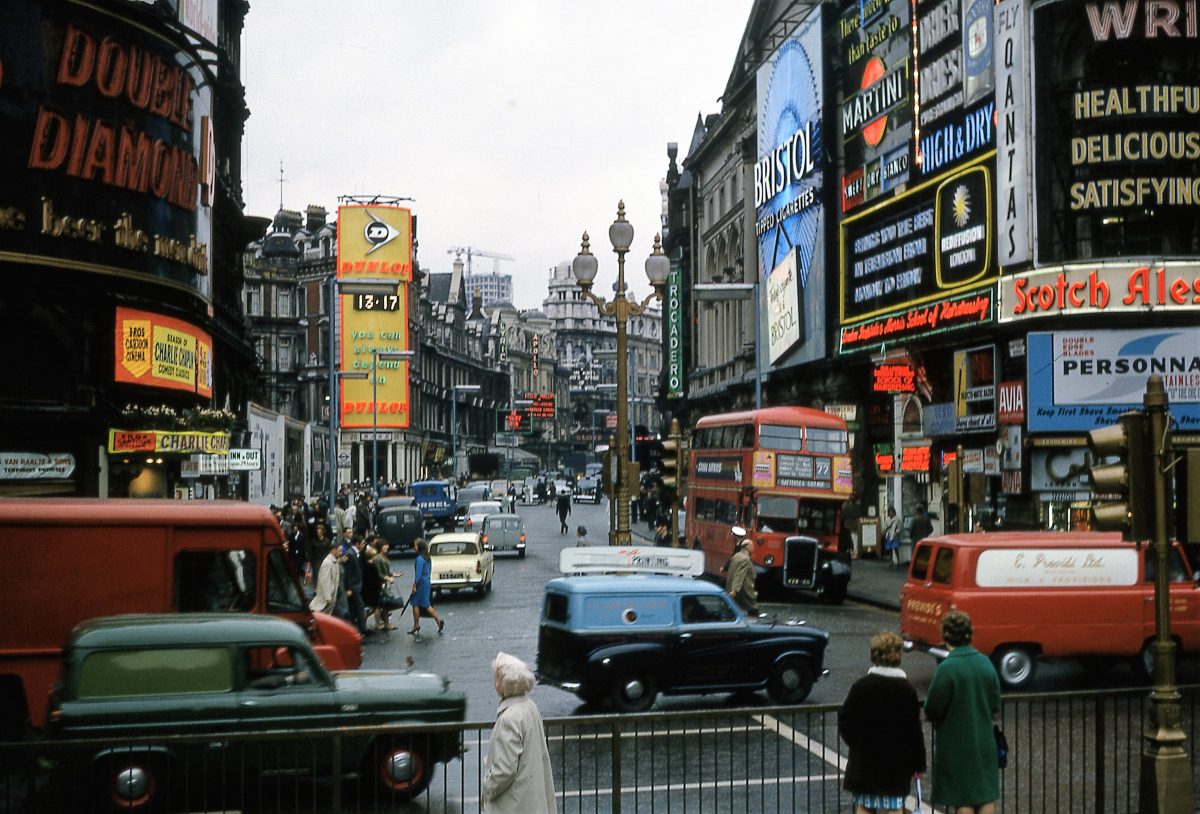 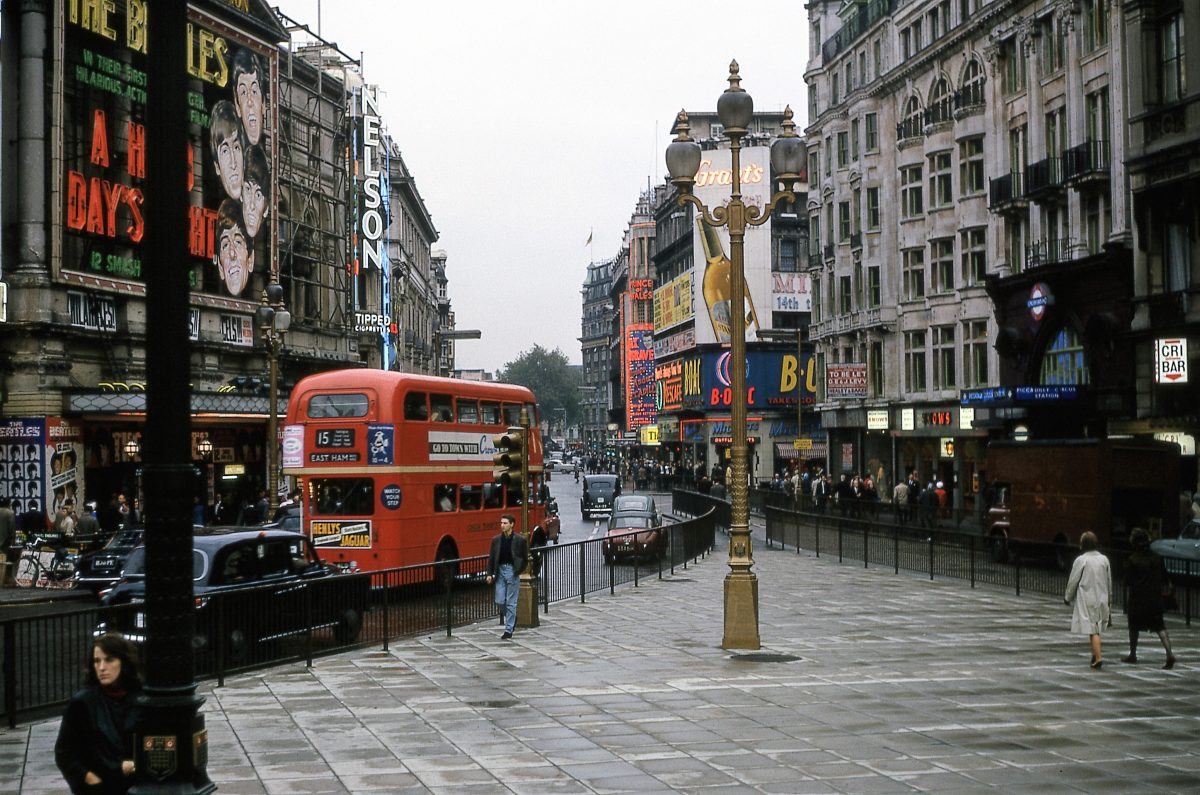 That year Coca-Cola starting advertising at the famous London landmark and has done so ever since; but, more importantly, the property developer Jack Cotton bought the Monico site (named after the Café Monico that had been there since 1877) on the north side of Piccadilly Circus. His plans for a huge office block at Piccadilly Circus passed almost unhindered and unnoticed through the various planning stages – many newspapers reported on it at the time as if the redevelopment was a fait accompli. As soon as the plans were released, however, there was a public outcry with most Londoners wanting Piccadilly to remain exactly how it was. The Conservative government, however, asked for proposals for a grand integrated rebuilding plan that covered not only Piccadilly Circus

but also much of the surrounding area. They were particularly worried about the expected future growth of traffic.

Lord Holford, acting for the Greater London Council and Westminster Council, proposed a ‘double-decker’ scheme that segregated pedestrians on elevated concrete concourses sixty feet above the ground while several lanes of traffic roared past below. There was also to be a ring of office towers which would be overshadowed by a 132-metre tower block on the Criterion Theatre site to the south of the Circus. This plan, with minor changes here and there, was kept alive throughout the rest of the sixties. It is mentioned in the short documentary film Goodbye, Piccadilly, produced by the Rank Organisation in 1967 as part of their Look at Life series, when it was seriously expected that Holford’s recommendations would still be acted upon.

There was yet another scheme, put forward in 1972, that consisted of three octagonal towers, the highest of which was to be 73 metres tall, to replace the Trocadero, the Criterion and the ‘Monico’ buildings. That year, with the wholesale destruction of Piccadilly Circus more than still on the cards, Hugh Cubitt, Westminster Council’s planning chairman, let it be known that he hoped the scheme could be started as soon as possible, so as to combat the decay of what he called ‘little more than a down-at-heel, neon-lit slum’.

Most Londoners thought, ‘Yes but it’s our down-at-heel, neon-lit slum and we’d like to keep it that way, thank you!’ A year later the Observer wrote: ‘Piccadilly Circus, more than anywhere else in the country, is a place for the people. It is not, first of all, a traffic junction nor an office centre. It is somewhere people go to wander about, gawp and gossip, and generally amuse themselves. Those who have drawn up successive plans for its redevelopment have failed to understand its real nature, and, one after the other their efforts have been laughed to scorn.’ 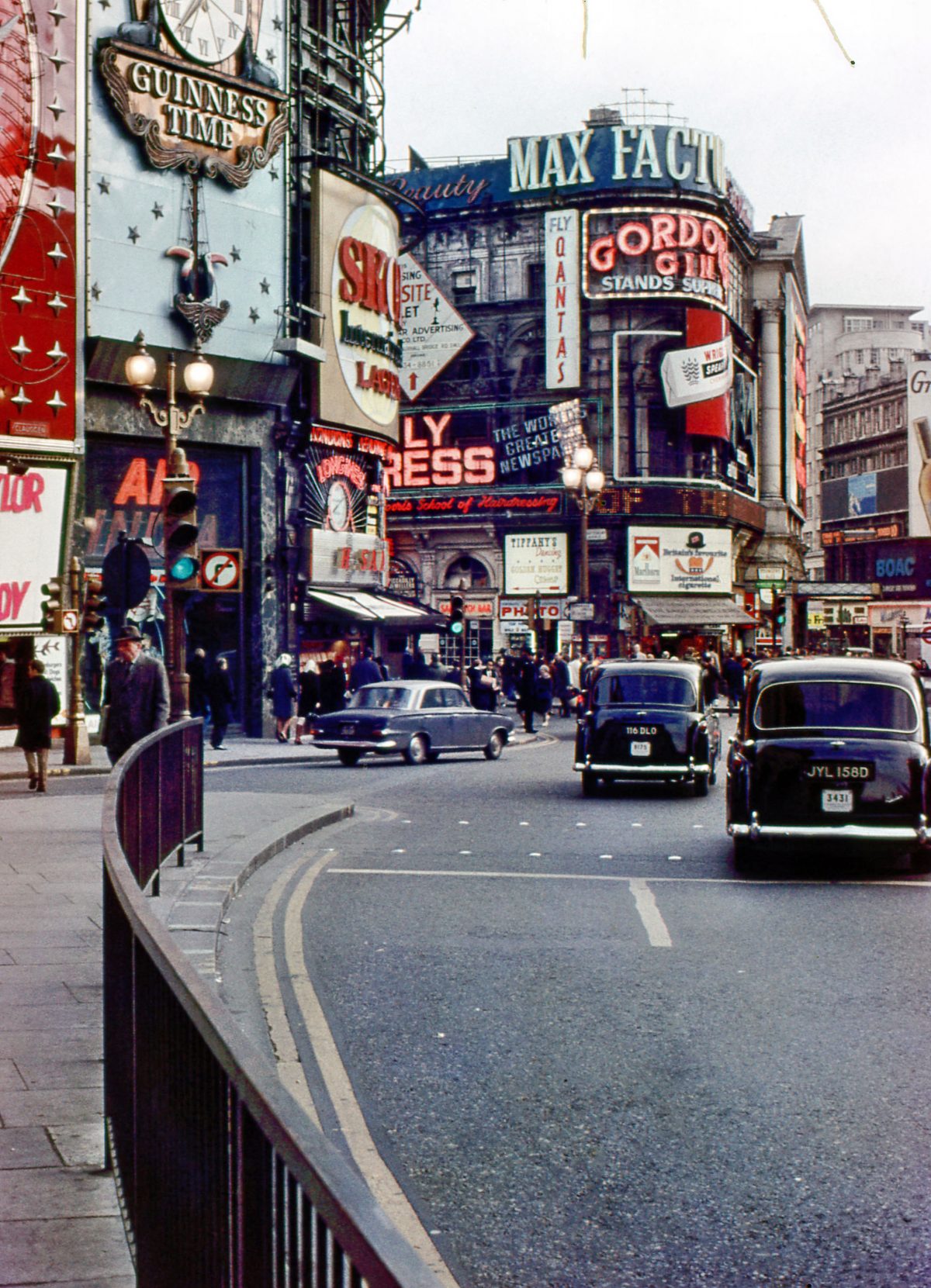 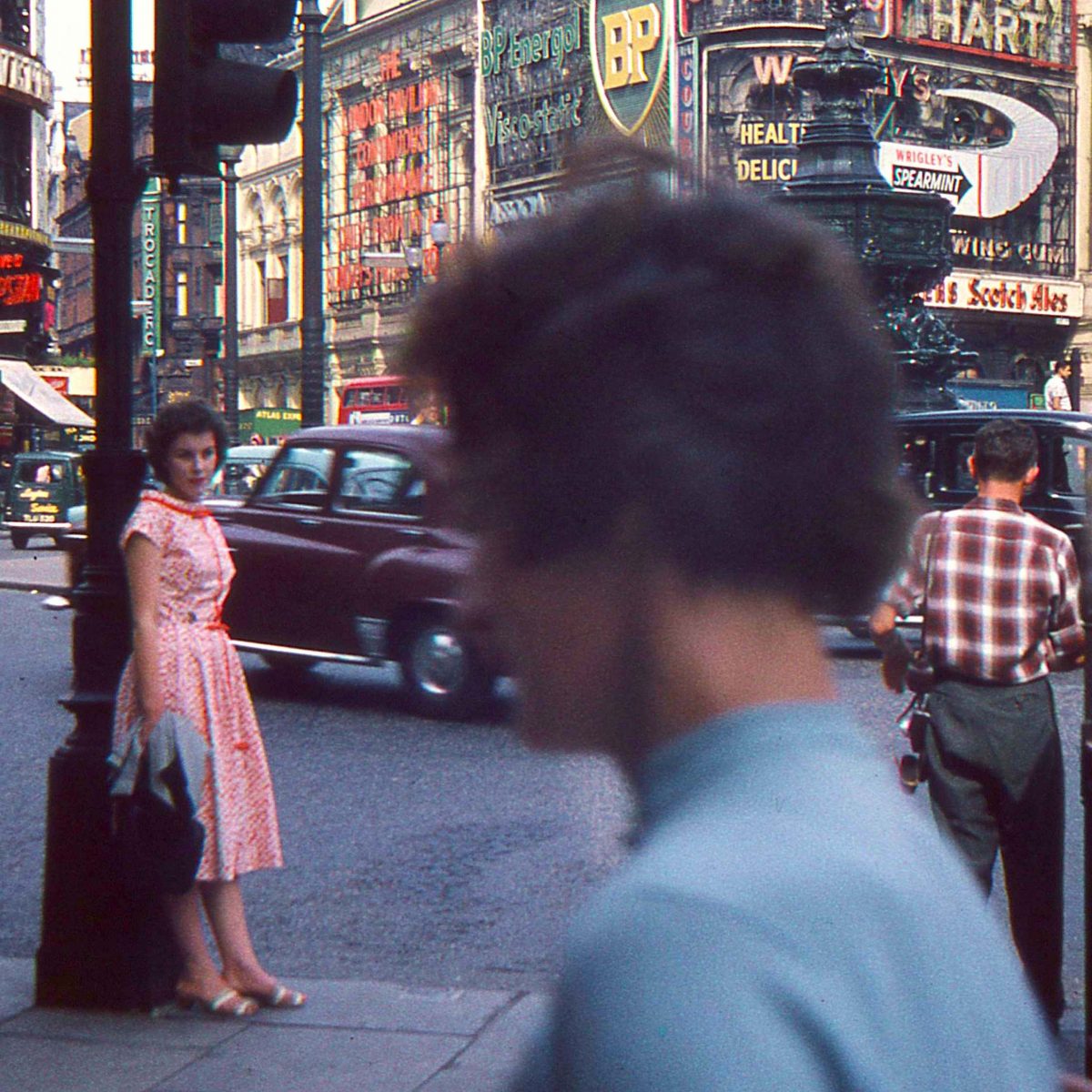 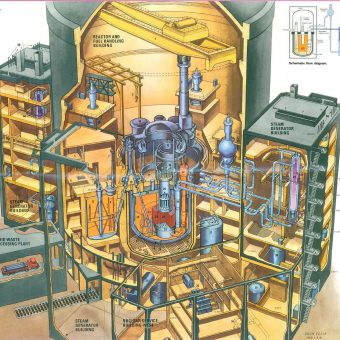 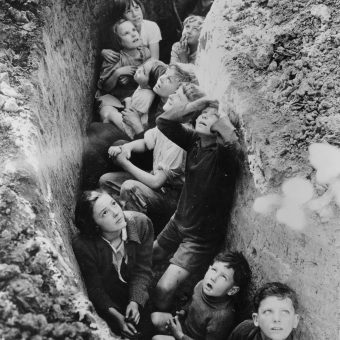