BEFORE launching into the typical “Oh, aren’t those Seventies fashions so terrible” spiel, let’s get one thing out of the way: 70s’ fashions are an easy target because they took chances. Whenever you are bold you run the risk of becoming the butt of jokes. Today’s styles seem to abide by the “best not to make waves” approach – unlikely to cause much ridicule in future decades, but also fatally milquetoast. Not so the 1970s.

Attribute it to millions of emboldened Boomers coming of age or a staggering amount of recreational drug use. Either way the case is the same: 1970s fashions inspire equal parts awe and terror for denizens of the 21st century. Let’s take a look at the top five instances where this inspiring boldness went terribly, terribly wrong. 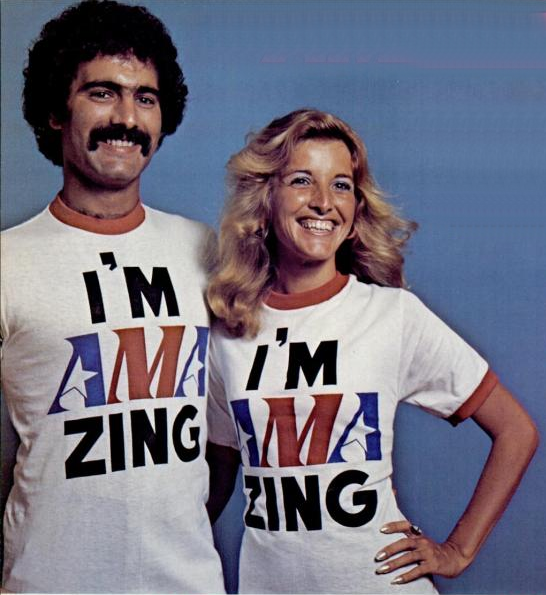 It’s easy to forget that the T-shirt didn’t come into its own until the Seventies. Until then, it was plain white tees only which were to be worn under a shirt or whilst working in the yard. Wearing a T-shirt out about town was verboten, lest you get mistaken for a derelict and arrested for vagrancy.

The 70s famously ushered in a new wave of grubby styles. Thanks to the mainstreaming of the hippy dress code, things became a whole lot less polished; the perfect opening for the T-shirt to slip in and claim its rightful place as the default shirt of the masses.

Unfortunately, the excesses of the decade found their way in, resulting in a staggering amount of lewd sayings and tacky iron-ons. They ranged from lame jokes to garish sparkling Chewbaccas. No chest or upper abdomen was safe from this epidemic of glittering Shaun Cassidys and custom vans.

Mercifully, as the nations emerged from the fog that was 1970-1979, clearer heads prevailed. The T-shirt wasn’t banished, but rather told to simply calm down, relax, and plateau. 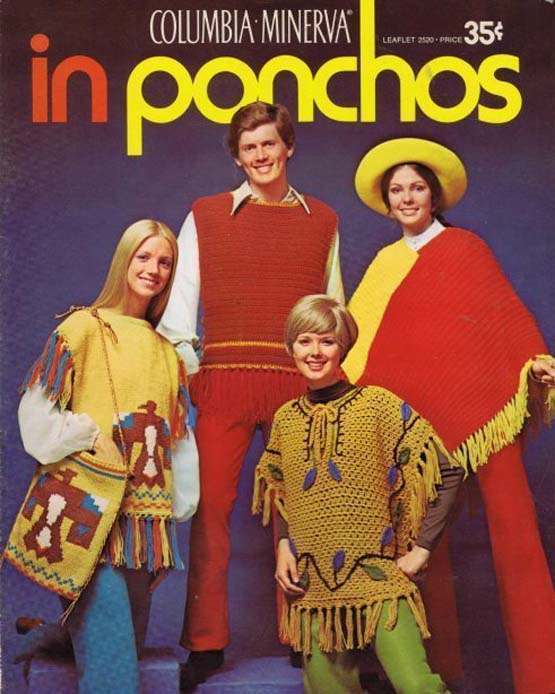 Bell bottoms and platform shoes are often cited as the primary affronts to good taste perpetrated during the 70s. However, I think we have forgotten the heinous crimes committed by yarn. Perhaps it’s best that we’ve collectively repressed its impact, but I think it’s high time we confront it.

Back before our clothes were made by toddlers in Philippine sweat shops, buying clothes was always expensive. It just made good sense to make it yourself and save some cash. What made no sense were the crochet abominations that were unleashed upon the world.

My hands tremble as write this…. crocheted Burnt Orange vests, swimsuits constructed of Harvest Gold yarn, tight fitting turtlenecks with garish Avocado Green owls emblazoned on the front. It was quite literally an attack on the brain’s visual cortex. Best to move on… 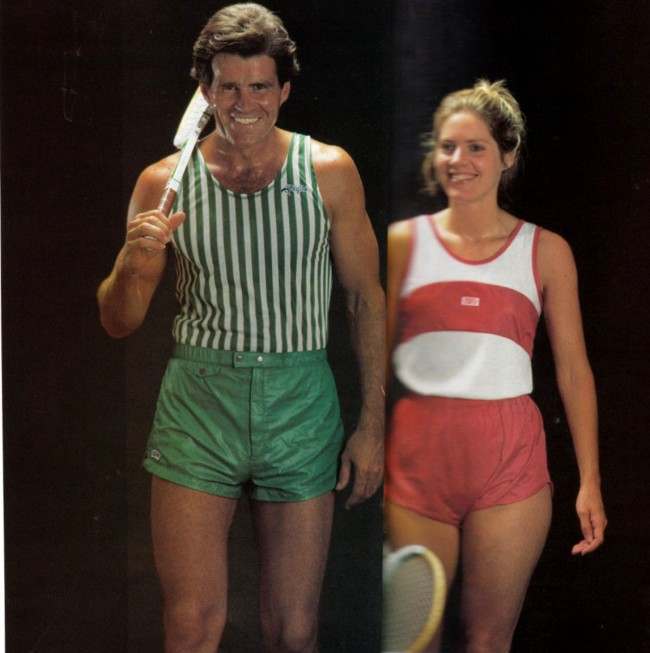 We take for granted the long baggy shorts that have been the fashion norm for men for some time now. How easily we forget that, once upon a time, men’s shorts were unfathomably short and tight.

Some might consider it a shame that men’s short shorts became extinct – after all, baggy cargo shorts aren’t exactly a treat to the senses. There’s an argument to be made that knee length shorts are equally objectionable. But all arguments fail when you realize just how short and tight men’s shorts were in the 1970s.

Every nook and cranny of the male anatomy was on public display. Worst of all, there was always the impending danger that at any second something would reveal itself. Let’s face it, there wasn’t much containment security in those garments – one wrong move, and things could go NC-17 in a heartbeat. 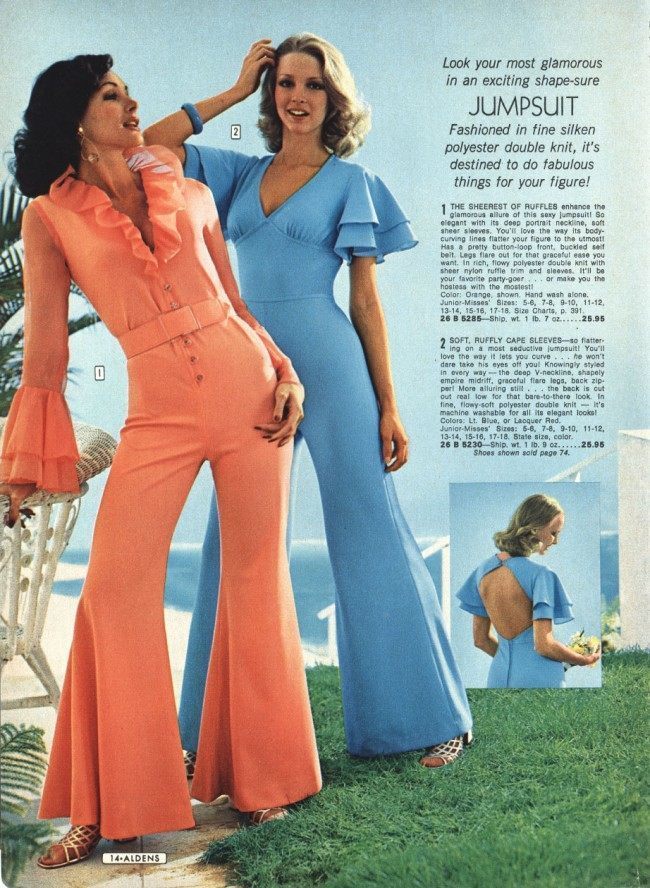 There’s very little difference between the fabric of athletic clothes we wear today and the polyester clothing from forty years ago. The difference is that, in the 1970s, the power of the space-age synthetic fiber was used for evil instead of good. Jumpsuits, tight fitting slacks, and leisure suits all harnessed the terrible power of polyester with devastating results.

Granted, it may have looked good in the Sears catalog, but on an imperfect body, things could get unruly. Every dimple and fold was highlighted and underlined by the unforgiving fabric. Housewives loved the wash-and-wear no iron quality, but actually wearing it was another story. Suffice it to say, sweating became a huge problem. Unlike today’s polyester based garments, the dense form-fitting attire of the 70s trapped sweat under its surface, creating a sort-of swampland ecosystem beneath. There was a reason men wore their collars unbuttoned to the navel. 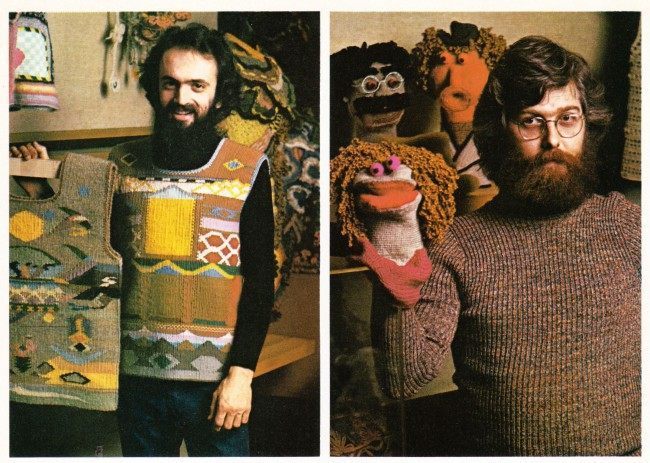 Facial hair has made a bit of a comeback in the past few years, but this is only baby stubble compared to the hair explosion of the Seventies. Back then, it wasn’t just facial hair – it was a disguise. There was no such thing as a finely trimmed goatee – faces got buried beneath thick pelts of hair. Clean shaven rock groups quickly became unrecognizable mountain men. Even the Beach Boys emerged from the 1960s looking like Neolithic cave dwellers. 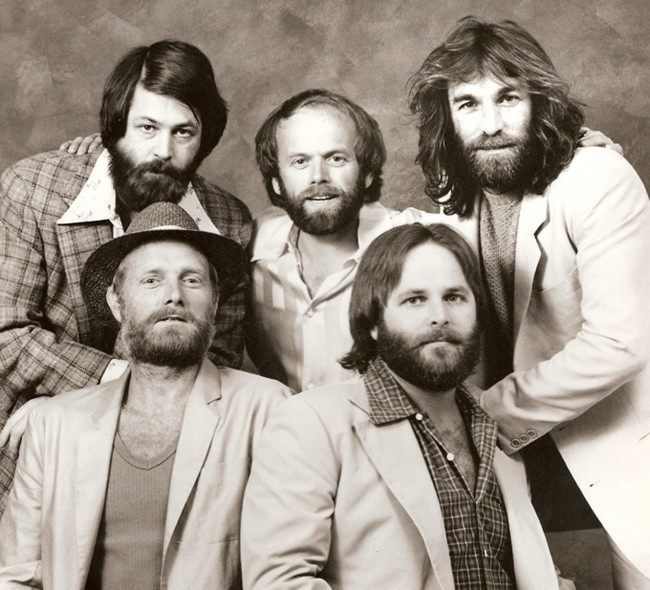 Don’t get me wrong – facial hair isn’t necessarily a bad thing. It’s just that there should be a happy medium between Cary Grant and Grizzly Adams. And don’t get me started on the body hair… for reasons that defy logic, it became sexy to have a thick carpet of chest hair. I still maintain that Burt Reynolds and Gil Gerard harbored small woodland creatures within their furry manscapes.

I realize this is only the tip of the iceberg, but I’ll stop here. Mork suspenders, tube socks, Terrycloth shirts, plaid blazers, butterfly collars… the list is seemingly endless. Yet, as bad as it was I have to respect its flair. It was a decade that gave the finger to “good taste” and proceeded on its own marijuana infused momentum. I don’t know about you, but I wouldn’t mind a little of that these days.