THE painter Pablo Picasso once asked who can see the human face correctly: the photographer, the mirror, or the painter.

Popular horror films and television programs have long highlighted all three possibilities, but focused most intently, perhaps, on the mirror.

The film concerns grown siblings Kaylee (Karen Gillan) and Tim (Brenton Thwaites) who confront a mirror from their old house. Kaylee believes the mirror is supernatural, and the cause of her family’s destruction. Tim, however, believes differently, at least until he is forced to confront the sinister old mirror again.

Why do mirrors appear with such regularity in horror-themed TV and film productions?  Perhaps it is because mirror is a decoration that can represent different things at different times.  A mirror can symbolize vanity, guilt, a sinister “other” self, or even different realms of existence.

In other words, we gaze into a mirror, and we see not just a reflection of what is there, but also, perhaps, those things that are hidden, or invisible to the naked eye. When we gaze in that reflective glass, we see who we really are, not just the pretty surface.

Below are five of the most memorable TV and film tales that focus on the mirror, and reflections of terror. 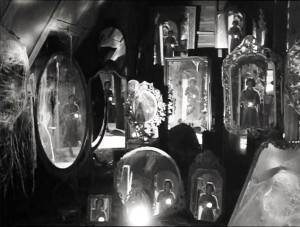 The Thrashers are upset to learn from locals that their new home may be haunted. The woman who once owned the home in the 1860s, Laura Bellman,  died tragically, and shifted her “hungry” spirit into any and all objects that would cast a reflection, whether a mirror or a window.

Marsha soon finds a locked door in the attic. Inside, in the dark, is a room of more than-a-dozen mirrors.

Almost immediately upon discovering the mirrors, Marsha and Gil are startled by images of Laura’s ghost, the woman in the mirror…beckoning to them. She is trying to “break through,” and she is murderous.

“The Hungry Glass” is dominated by ironic commentary about mirrors. “Mirrors never lie,” “mirrors bring a house to life,” “Every time you look in a mirror, you see death,” and so forth, and Boris Karloff’s ghoulish introduction even hits a similar note. He warns the audience that it should “make sure that your television casts no reflection…”

In the case of “The Hungry Glass,” the mirrors of Laura Bellman represent endless vanity. Rather than die, Laura froze her “beauty” in the half-life of the reflection only to find that her appetite for more life was unquenchable. 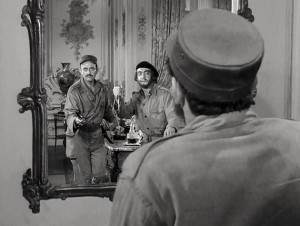 Rod Serling penned this TV story about a mirror, but here the focus wasn’t supernatural so much as political.

In The Twilight Zone’s “The Mirror,” a revolutionary in Central America, Ramos Clemente (Peter Falke) becomes dictator of a Central American state. As he assumes control of the mechanisms of the government, he receives a special gift from his predecessor, the deposed General De Cruze.  That gift is an ornate mirror.

Before long, Clemente’s brutality becomes obvious to friends and allies alike as he orders mass executions of political foes. But then something strange happens: Clemente begins to spy would-be assassins in that mirror. And what’s worse for him is that those assassins are the four lieutenants who served him loyally during the revolution. He orders them all killed, and then, finally, sees his real assassin reflected in the mirror: himself.

With Clemente as a clear stand-in for Fidel Castro, who had risen to power in Cuba not long before this episode aired, “The Mirror” might very well qualify as a psi-ops project from the CIA, designed to undermine Castro’s sanity if he ever happened to catch the show in reruns.

In this drama however, the mirror projects images of paranoia and suspicion, ones that show the “real” Clemente, not the confident exterior he expresses to others. A priest featured in the episode notes that men like Clemente can never see their real assassin: their own human nature.  The mirror provides Clemente the perfect vehicle for doing just that. 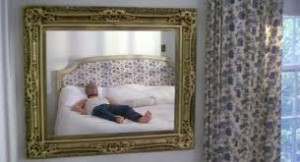 “When you break a mirror, you free everything it’s seen,” one character insists in this horror movie from director Ulli Lommel.

The film concerns a killer whose soul becomes trapped in a mirror after he is murdered by two children, Lacy (Suzanna Love) and Willie (Nicholas Love).  The children — who acted in self-defense and to protect their mother — grow up, but find that they are traumatized by the past.  When priests and psychologists can’t help them escape the past, they realize they must confront the mirror again.

The mirror is destroyed, but every shard of the broken decoration possesses evil life, and begins to possess the living. The final solution is to throw all the assembled mirror pieces down a well. At least until the 1983 sequel, The Boogeyman 2.

In the case of The Boogeyman, one might state that the mirror represents the truth about the past that the children don’t want to confront. Willie spends his adult life, for instance, painting mirrors black simply so he doesn’t have to confront his own act of murder, from childhood.  He never need face his guilt if the mirror can’t show it to him.

John Carpenter’s underrated but brilliant Prince of Darkness (1987) sees the mirror in an entirely different fashion.  The film suggests that a mirror could actually be a doorway or portal to the anti-matter universe, to the realm of the fearsome Anti-God.

The film follows a team of graduate students in Los Angeles, who study a mysterious canister in St. Godard’s, a run-down church.  Inside the canister is a volatile, swirling fluid that could be pure evil.

When one of the students, Kelly (Susan Blanchard) is infected by the fluid, she begins to transform.  She becomes a living embodiment of Satan, a being who is determined to bring the Anti-God — her “father” — into the realm of matter.  She uses a mirror to connect the matter and anti-matter universes, and — as is the case in many productions involving mirrors — the universe can only be saved by shattering the glass. In this case, a priest played by Donald Pleasence happily obliges…with a pick-axe.

Unfortunately, the mirror breaks with one heroic student, Catherine (Lisa Blount) stranded in the other, or anti-universe, and the end of the film delves deeply into the true nature of the mirror.

Catherine’s heart-broken lover, Brian (Jameson Parker) reaches for the mirror in his bed-room, gazing into his own reflection, and the film’s many themes converge.  Brian is not only wondering if Catherine is watching him from the other side — from the anti-verse — but he is looking into his own face too, seeking answers. Brian is wondering, perhaps, if, the evil, the contamination could pass to him next. He reaches for the mirror, for some connection to his lost lover, but the film cuts to black before he touches the looking glass. Thus, it is this moment that Carpenter leaves us to ponder as the film concludes: a close shot of a groping hand reaching for (but not actually touching…) a mirror. In this case, the mirror may not be a doorway, but a barrier preventing human connection, and love.

This film from director Alexandre Aja follows suspended NYPD detective, Ben Carson (Kiefer Sutherland), a man suffering from post-traumatic stress after killing a man on the job. Carson is estranged from his wife, Amy (Paula Patton) and their two children while he attempts to beat his alcoholism. He takes a job at a burned-down old department store in Manhattan, The Mayflower, and patrols the premises as the new night-watchman. The last night-watchman, Gary Lewis, died under mysterious circumstances.

Before long, Ben begins to see strange phantasms in the store’s ubiquitous mirrors. And it turns out the film’s monster — a demon — adopts the form of reflections as people wander by the reflecting skin of the mirror. Once the demon captures your “image,” it can kill you, by killing your image, your reflection.

In this case, the mirrors are a reminder that you are, essentially, what society sees you as. You are not a complete, whole person with contradictions and layers but rather a shallow reflection only of the culture’s fears.

You might be seen as a killer, or as an alcoholic, or an unfit father, but in Ben’s case he is much more than any of those negative descriptions entail.   Very much like the demon in the film, he wants his “whole” life back again. 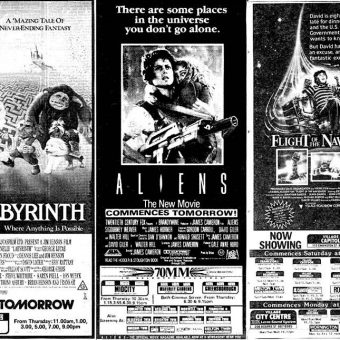 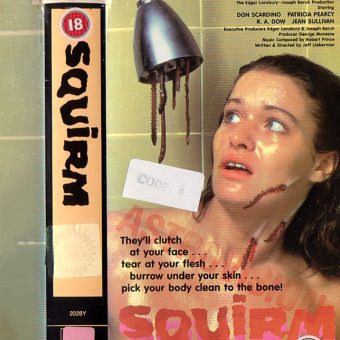 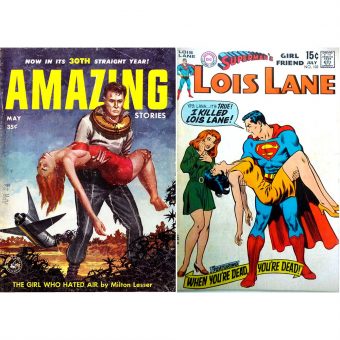 Carried Away! 40 Examples of the Most Insanely Overused Image in Vintage Pop Art