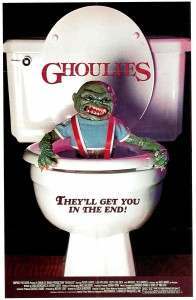 Thanks to Alfred Hitchcock’s Psycho (1960), the shower became a common location of terror in the horror genre, and you can read a thorough and excellent guide to shower-horror in Bathroom Horrors.

But horror movies universally try to one-up previous movies, to ratchet things up and go just a bit further. And, well, a horror scene set in the shower is simply not always enough to scare or debauch jaded audiences.

Accordingly, the terror must sometimes move to another location in the bathroom: the toilet.

With that in mind, here is a look back at eight movies which went to the bathroom…literally.

This quasi-documentary examines the history of the Fouke Monster, and one scene finds the Boggy Creek Monster reaching into a bathroom window to attack an unsuspecting gent while he is on the throne.

In Boggy Creek II (1985), this toilet terror was one-upped by a scene with a fat redneck in an outhouse.  After being attacked by the monster, he shits his britches, and his wife must hose him down. Alas, that delightful clip is not available on Youtube at the moment.

John Cassavetes stars in this Satan film from the early 1980s, and is still the best thing about it. At one point in the action, a demon attacks a young woman in a theater’s toilet stall, and as you can see, the attack is cross-cut with a rock-and-roll movie playing in the auditorium.

The bathroom scene in this horror film re-defines the term“floater” to include “severed human head.”

1985 was a big year for outhouse attacks apparently. In this fifth installment of the Friday the 13th series, unlucky Miguel Nunez (playing a character named Demon) gets murdered inside one.

Having already murdered a woman in the shower, Norman Bates (Anthony Perkins) — as Mother — offs a young motel guest while she is sitting on the toilet.

In terms of pure overkill, this toilet death takes the cake. Here, a bum dissolves while taking a crap, his body melting down into multi-colored goo.  This one’s really disgusting, folks.

The original Ghoulies (1985) went for broke, and featured a monster emerging from a toilet on its poster art.  In the original film, we also see one of the little beasties wading around in a toilet bowl. The sequel provides a more grotesque toilet death, as you can see below.

This Wes Craven sequel opens with GhostFace killing an unlucky young man in a movie-theater bathroom (shades of Incubus!)  Although the scene takes place in a toilet stall, the actual toilet is secondary to the scene.