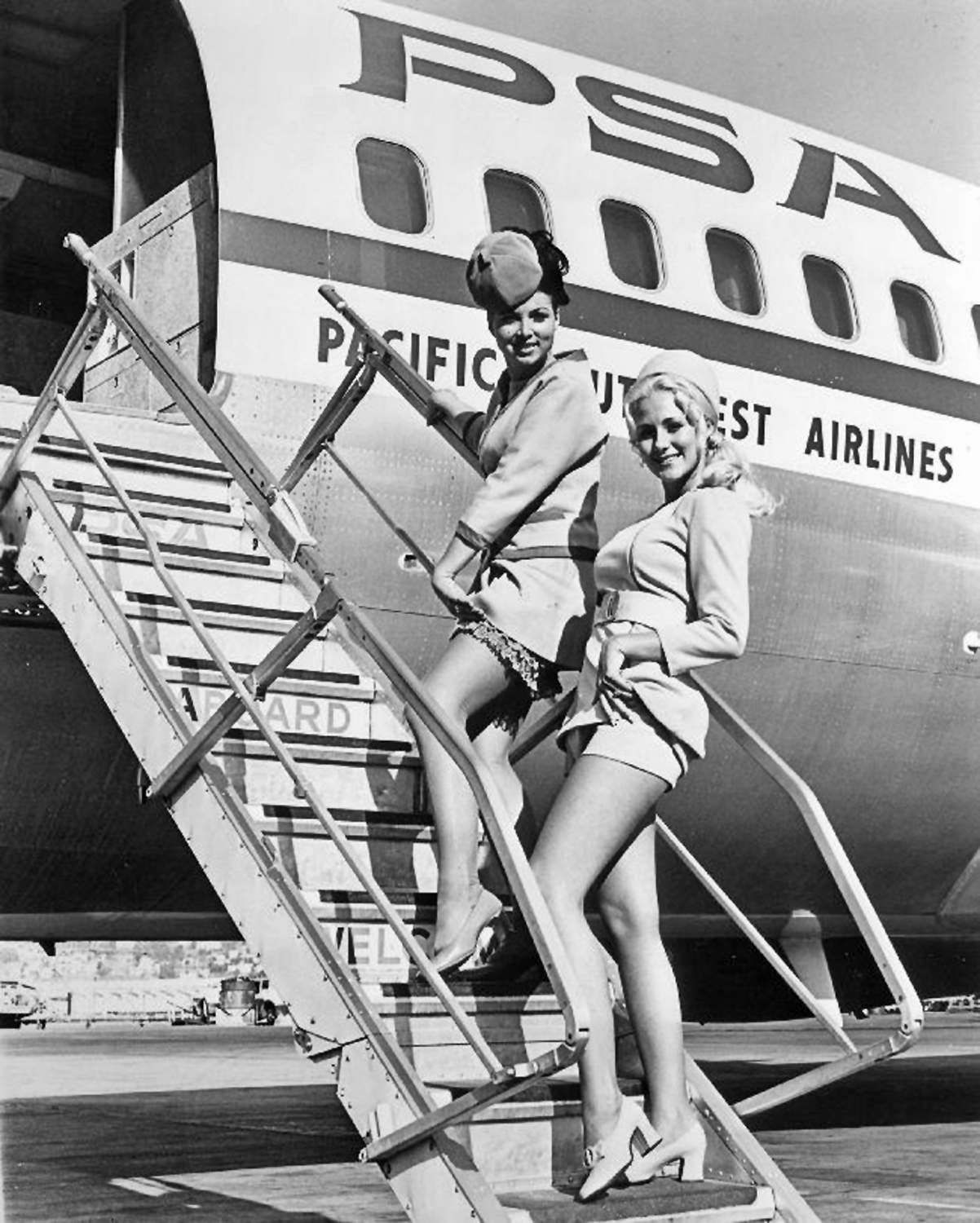 Here is the copy from an ad that aired on Los Angeles radio in the summer of 1969:

Right now PSA, the airline that is famous for its stewardesses, is looking for girls. Yes..girls to fill a cute orange mini-uniform…girls who smile and mean it…girls who give other people a lift. Now if you’re single, 18 1/2 to 26 years old, 5 foot 1 to 5 foot 9, 105 to 135 pounds, have a high school diploma or better–come in for an interview at the Los Angeles International Airport stewardesses department Tuesday or Thursday. PSA is an Equal Opportunity Employer

(Equal opportunity except with regard to age, sex, height, weight, and marital status.)  My how times have changed. Nowhere is the difference in the cultural mindset between our own time and that of the 1960s more striking than in the role of the flight attendant. The job basically was transformed from ‘eye candy’ to ‘serious professional’ in a manner of a few short years. The new concept of total gender equality rendered the ‘cocktail waitress in the sky’ obsolete and an object of derision – a horrible example of male chauvinism in action. 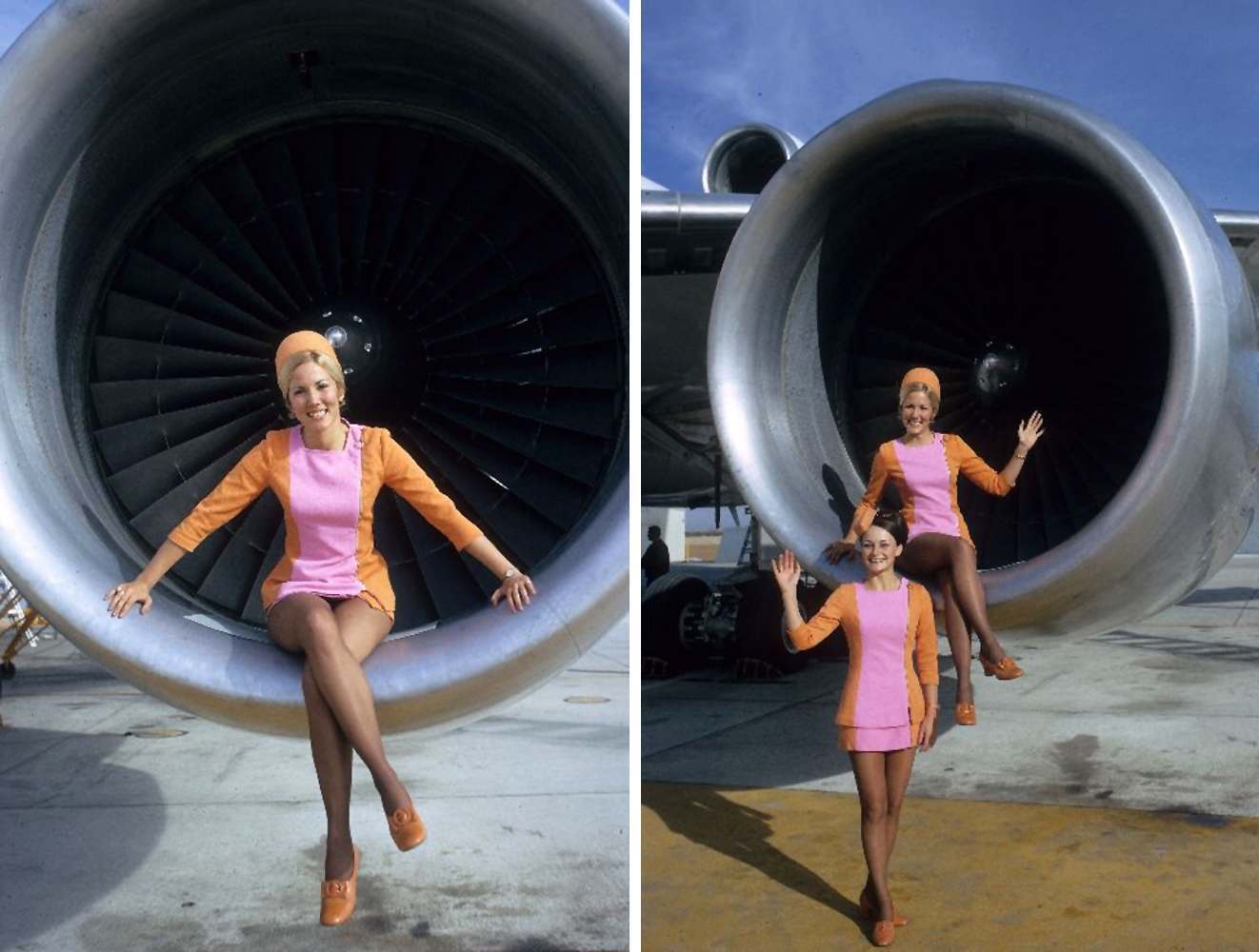 In 1971, the National Organization for Women (NOW) picketed in protest against the airlines calling them “sexist and degrading to women” for their use of stewardesses as sex objects. In particular, they focused on the National Airlines with their “Fly Me” slogan. The NOW protesters demanded men to be portrayed in the advertising too. 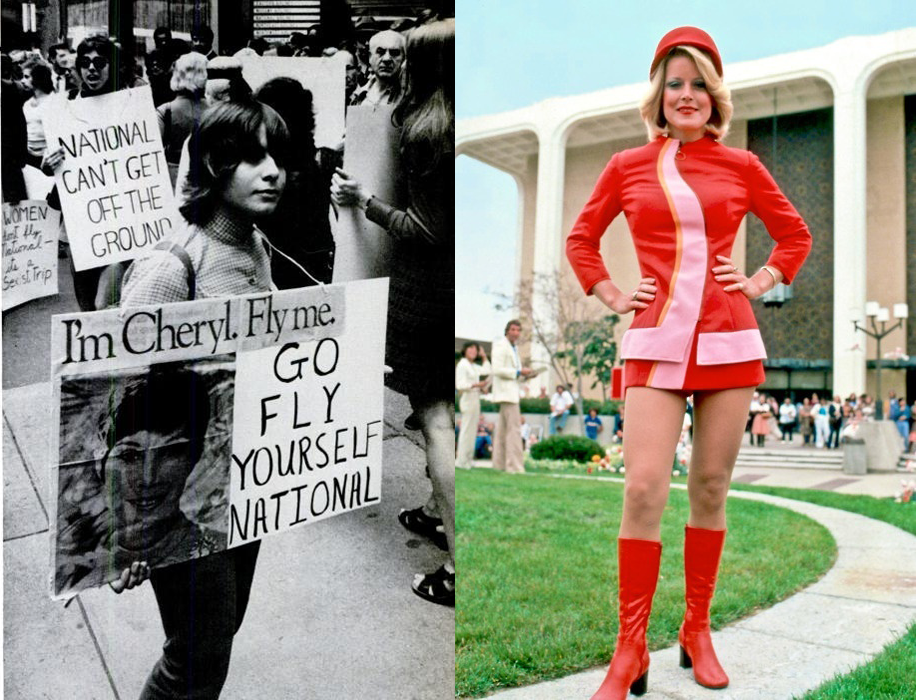 Meanwhile, the girl in the infamous “I’m Cheryl. Fly Me” advert, Cheryl Fioravanti, didn’t feel the same way. She had been a stewardess for 22 years, and loved every minute of it. Unfortunately, her response only fueled the fire of the NOW protesters:

“I’m afraid I don’t agree with the women’s liberation very much. I don’t think that household chores should be shared. I like to be in the kitchen and I like to have Gene in charge of paying the bills.” 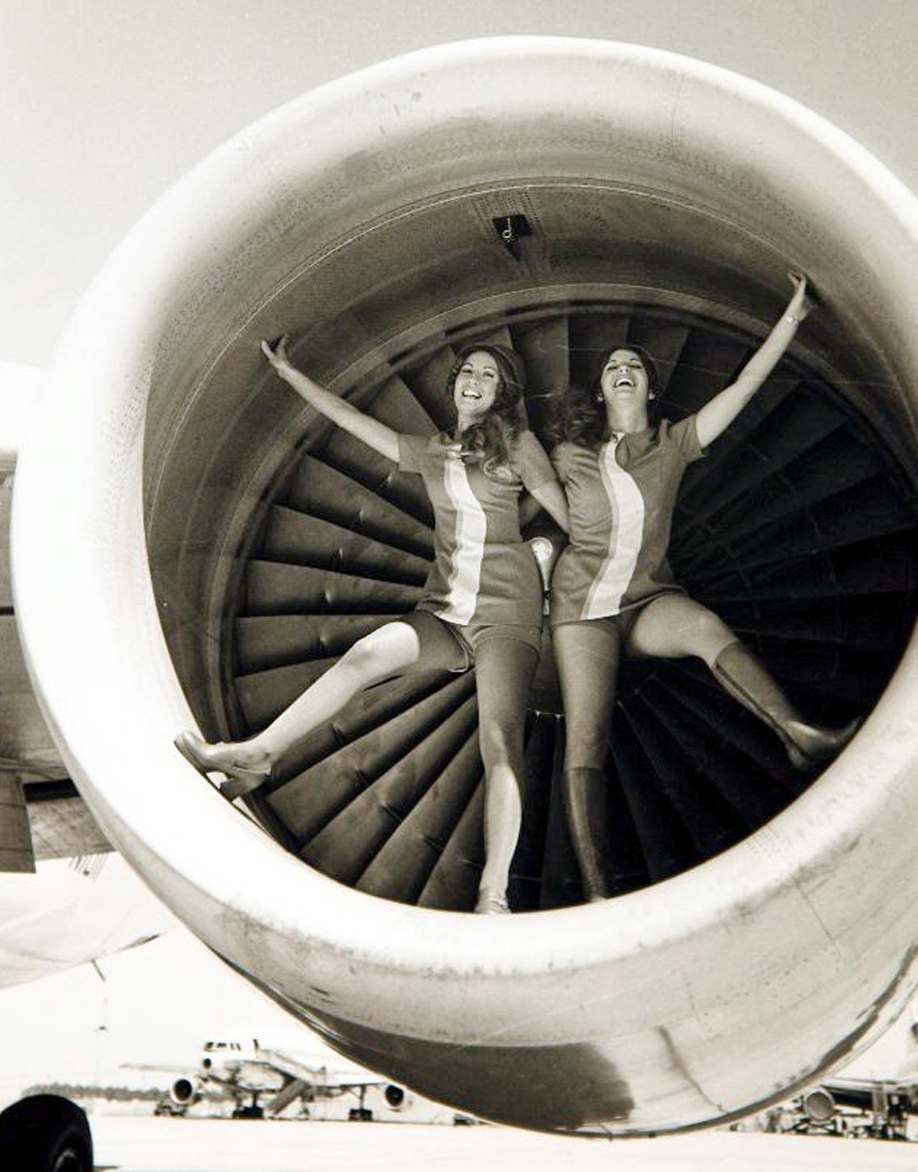 Needless to say, the “groovy age of travel” was coming to an end. The use of sexy stewardesses as a way to sell airline tickets had a few more years left, but the clock was now ticking. NOW had found a target, and by mid-decade it was clear that this sort of thing had run its course. Like it or not, that’s how it went down. 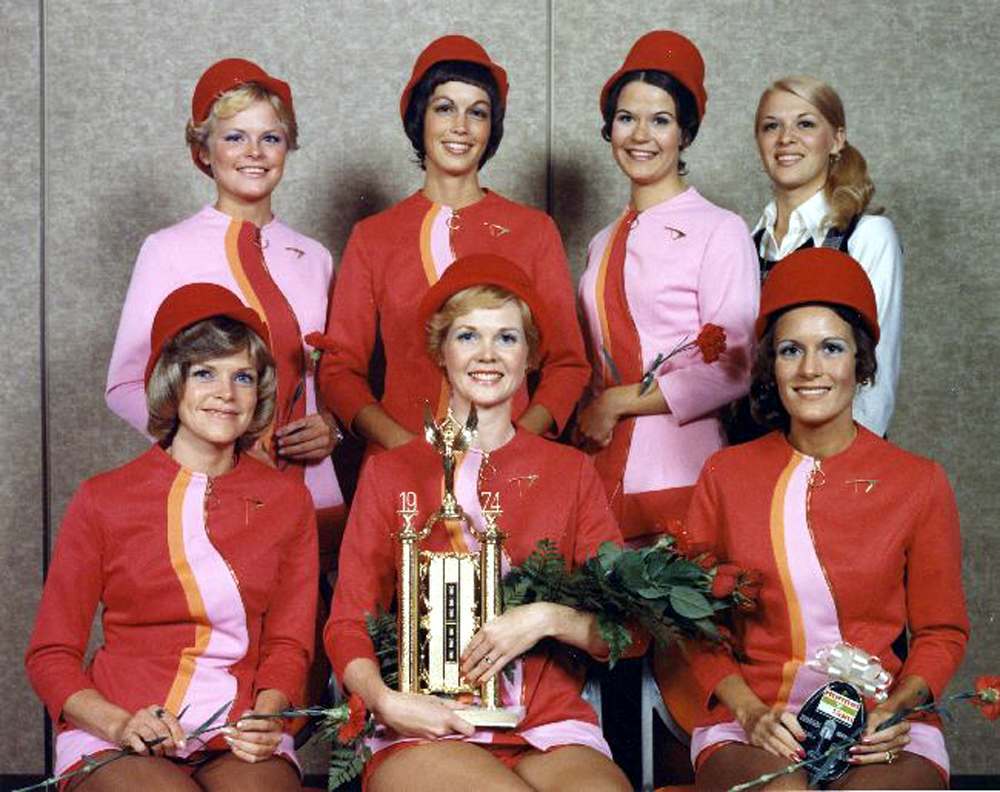 But don’t think we lost the sexy stewardess all because of NOW – they may have started the fire, but other factors poured on the gasoline. For example, travelers on airplanes by the mid-1970’s weren’t just males; women and families started to take up a significant portion of the market. The “I’m Cheryl. Fly Me” marketing approach wasn’t going to work too well with career women or moms and dads traveling with kids. The sky was not longer an exclusive gentlemen’s club – it was now open to everybody. 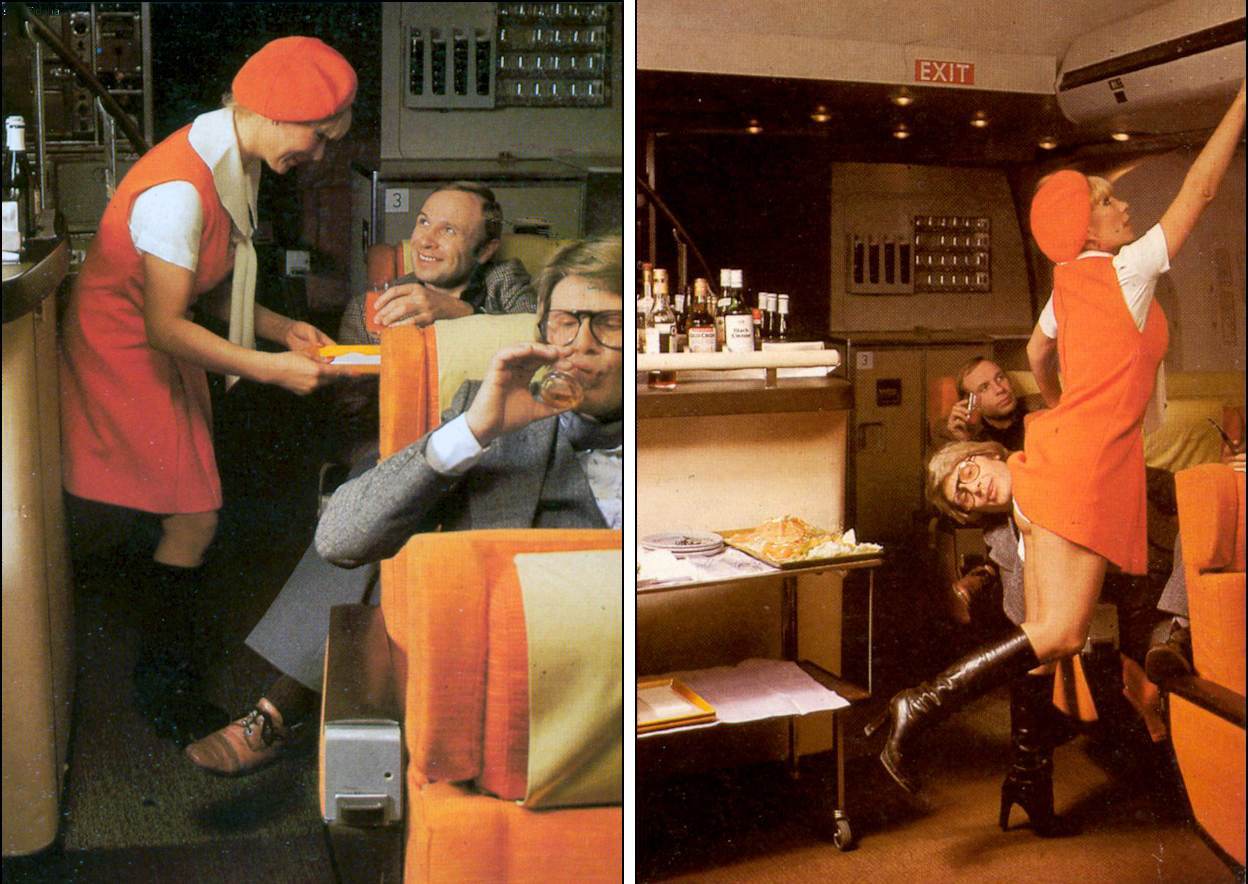 In this politically correct climate, the idea of a stewardess sexpot is damn near science fiction. It may sound wonderful from a man’s point of view…. not so much from the woman’s.  In the book, Sex Objects in the Sky: A Personal Account of the Stewardess Rebellion (1974), author Paula Kane imagines what a male passenger is thinking: 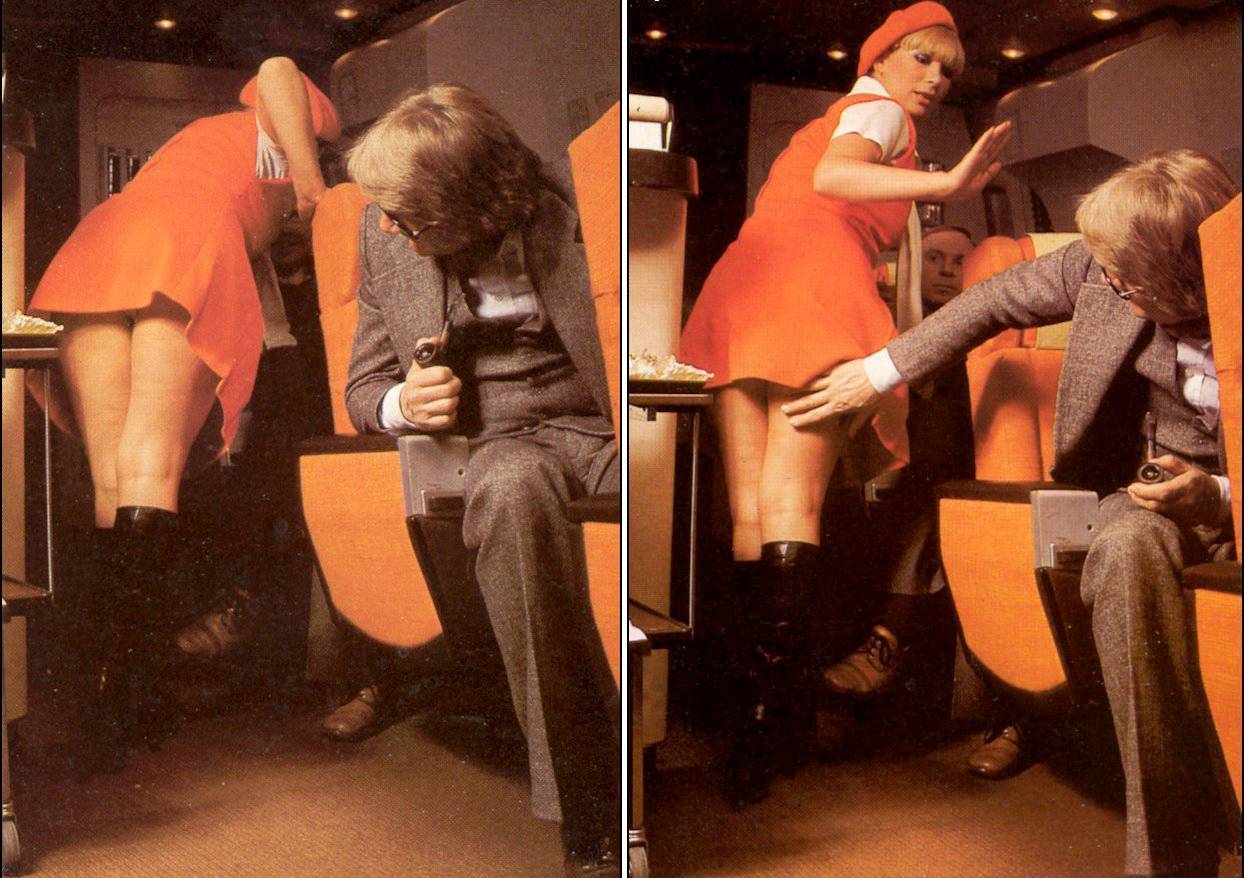 Kane explains that,”if she is a stewardess who has been flying for some time, the chances are very good she is only hoping that you won’t make a pass at her or get drunk or make a scene.”

From the book Femininity in Flight (2007) by Kathleen Morgan Barry::

“With ever bolder innuendo, airlines invited passengers to consider titillation by stewardesses a main attraction of air travel…. By the early 1970s invitations to sexual fantasy had become the overriding theme of the most visible and innovative airline marketing schemes…. the general trend of the late 1960s and early 1970s was to replace hints that stewardesses’ sexual allure was but one, albeit important, visceral pleasure of jet travel with coy but clear indications that sexual provocation was the ultimate thrill aloft.” 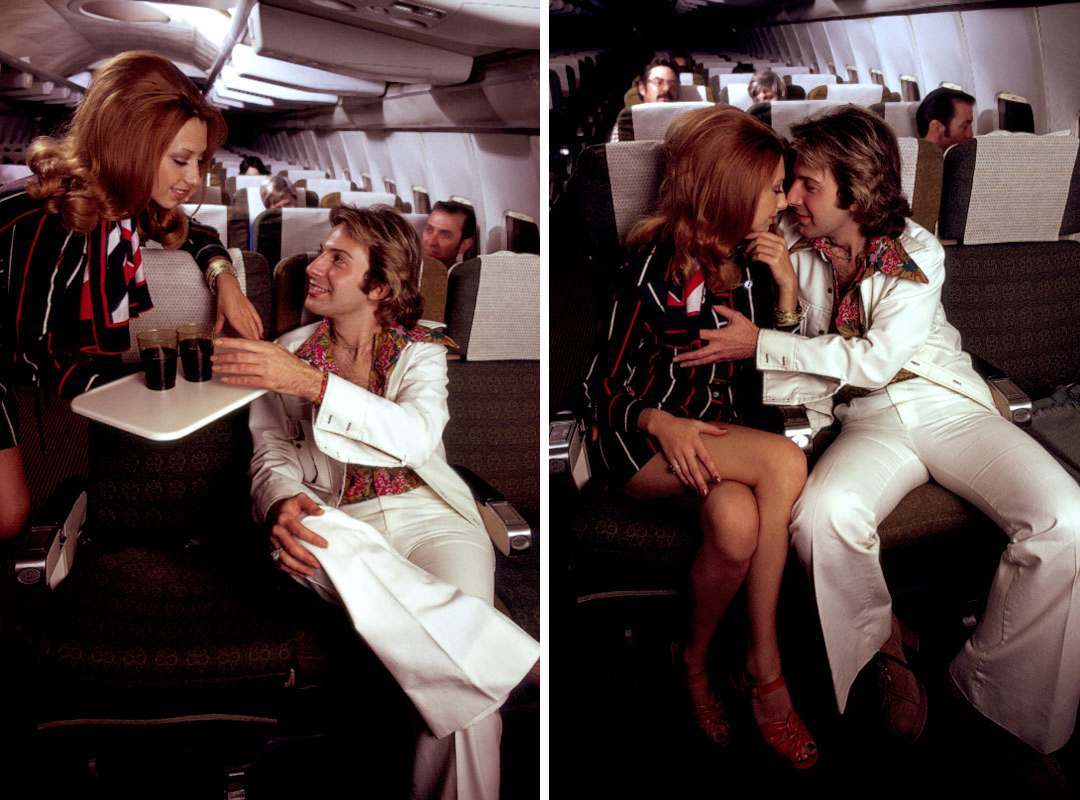 Truth be told, the “Groovy Age of Travel” was probably only groovy for the guys…. Or is it too simplistic to paint all these women as helpless victims? In another supposed personal account, Coffee, Tea or Me?, it was a time of sexual liberation, and not to mention great fun. 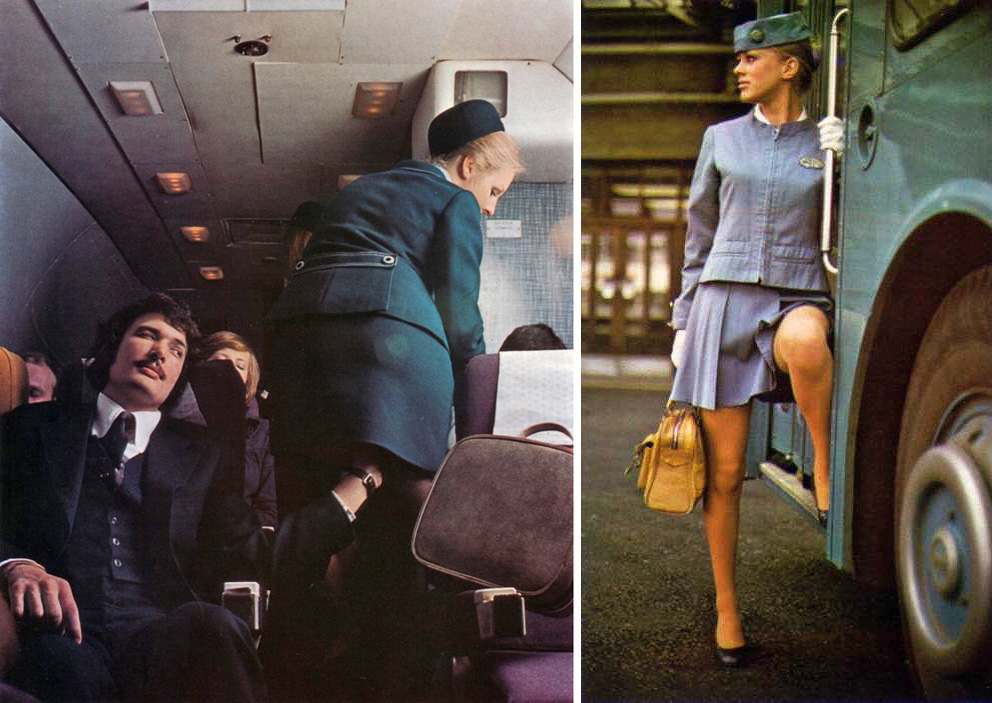 Victim or Empowered Woman enjoying the most of what the Sexual Revolution had to offer?

What’s the truth of the story? I guess, like most anything in life, nothing is ever black and white. There were gals having the time of their lives, riding the wave of the sexual revolution and loving every minute of it. Then there were those stewardesses who were utterly disgusted by the manhandling from sloshed businessmen.

But even this is still too black and white, too simplistic.  It doesn’t have to be an either/or. A woman could be liberated and sexually active AND be put off by a gross obnoxious drunk. The sexual revolution may have meant being open to swinging and experimentation, but it didn’t actually oblige you to do it with every single person who asked, no matter how unappealing (as many learned to great disappointment, after the sexual revolution was called off). 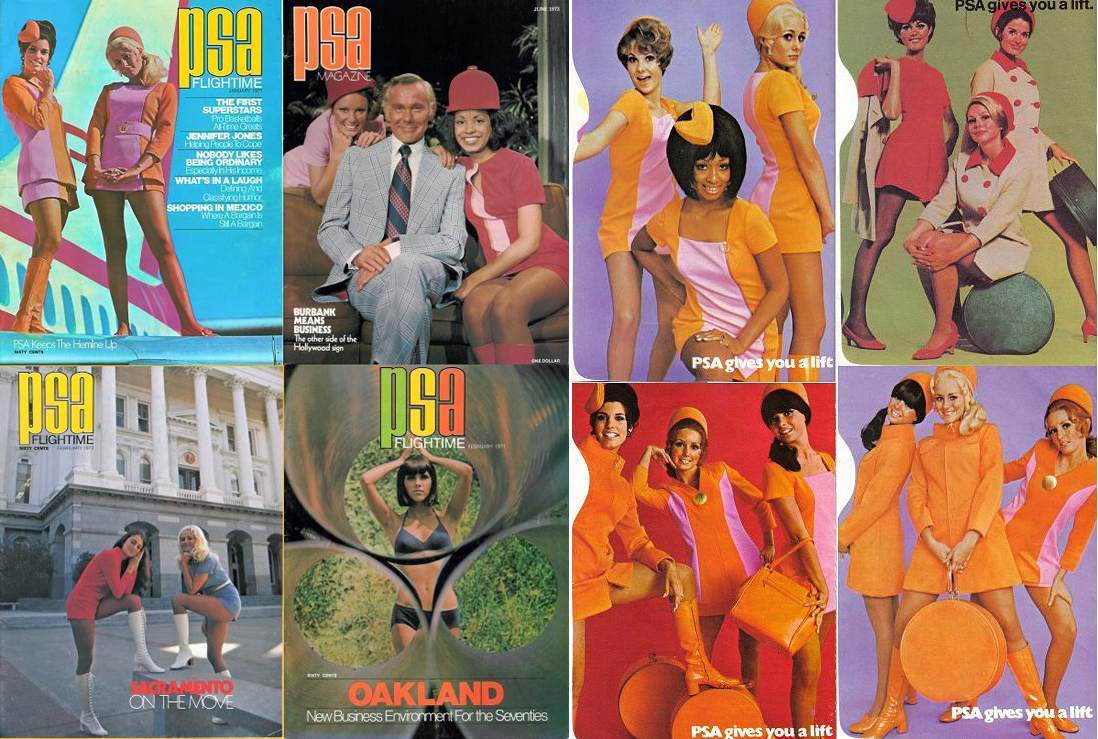 Another factor that spelled the end for the “sexy stewardess” was that a lot of these airlines simply were going bankrupt. They suffered from poor labor relations, intransagent management, and high debt burdens. The ones remaining had to cut costs at almost every level. Thus, the days of cocktails, swank decor, and Halston designed uniforms became ancient history. 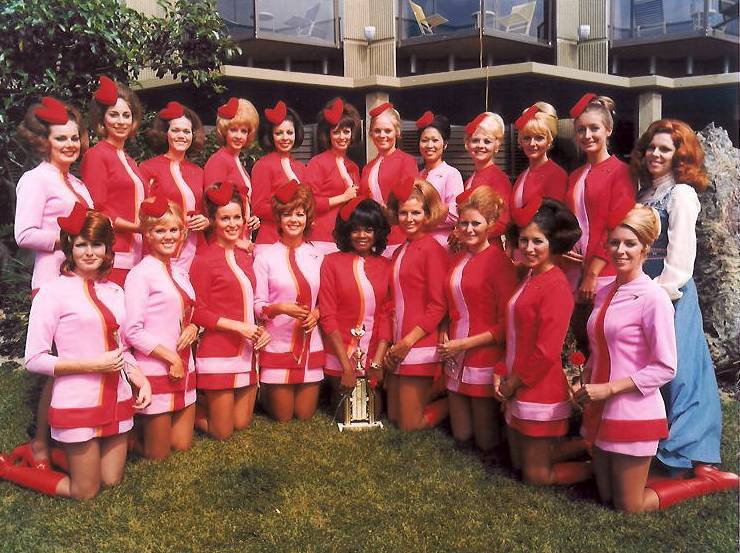 Add to this mess the increase in hi-jacking and crashes, and it became very obvious, airlines could no longer afford to be Mile High Playboy Clubs. They had to be taken seriously. 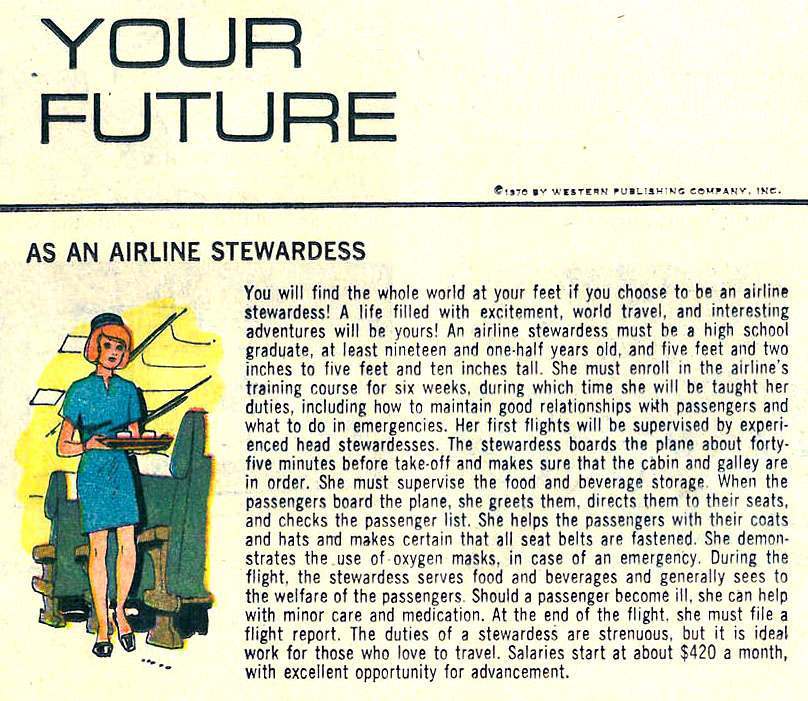 I’m surprise they didn’t specify her bust size requirements…. and notice they keep saying “she”. A male stewardess would’ve caused widespread panic back in ’70.   And “Salaries start at about $420 per month.”

Another career guide (from American Airlines)… 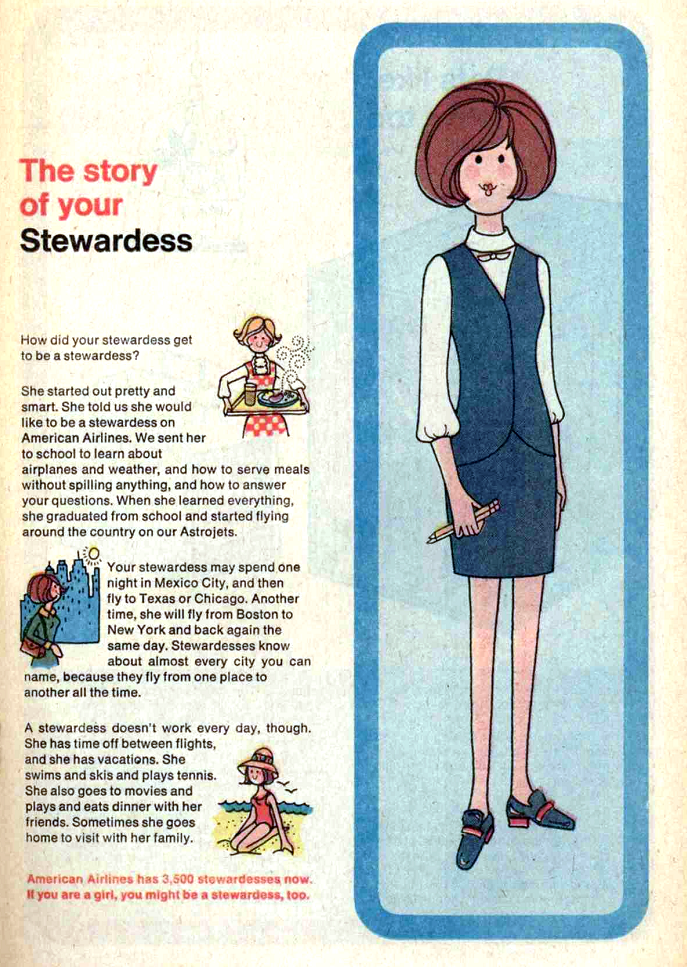 Again, you’ll notice that being a male “flight attendant” isn’t even on the table.  She’s got to be pretty, and her job doesn’t sound that much different than that of a waitress (who gets to go to exotic locations). 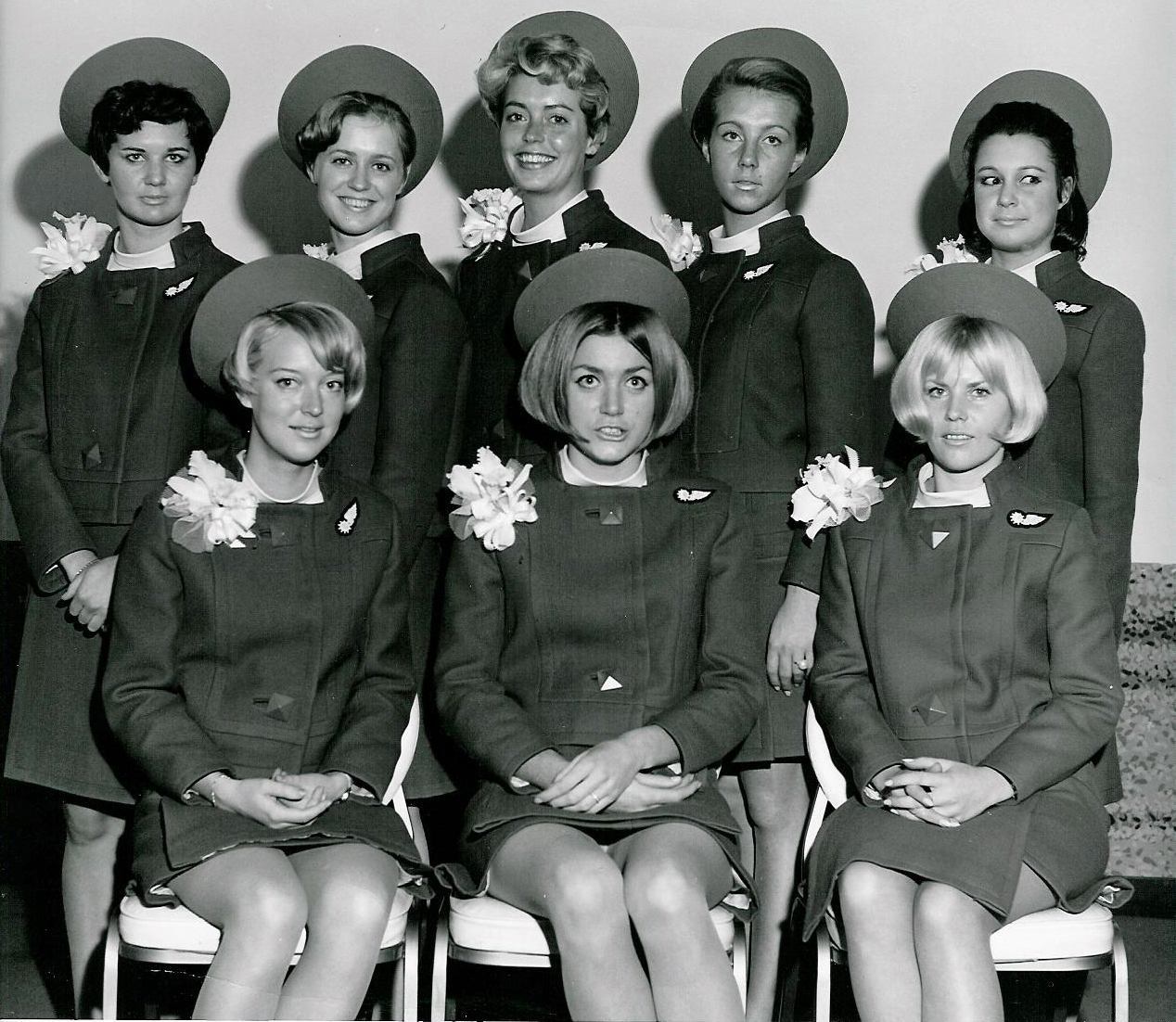 So, enough said about the job itself – without question, current flight attendants are nothing like their 1960s counterparts in terms of their responsibilities.    Sure, they’re still pouring soda and distributing pretzels, but they’re also a lot more training involved in terms of safety – something I think we can all be thankful for.

But, before we leave this subject, we can’t neglect to mention the uniform.  The flight attendant uniform of today is professional and conservative – the opposite of a few decades back.  When we pine for the days of  the Trolley Dollies, we are really pining for their outfits.    Really, it was all about the uniform… 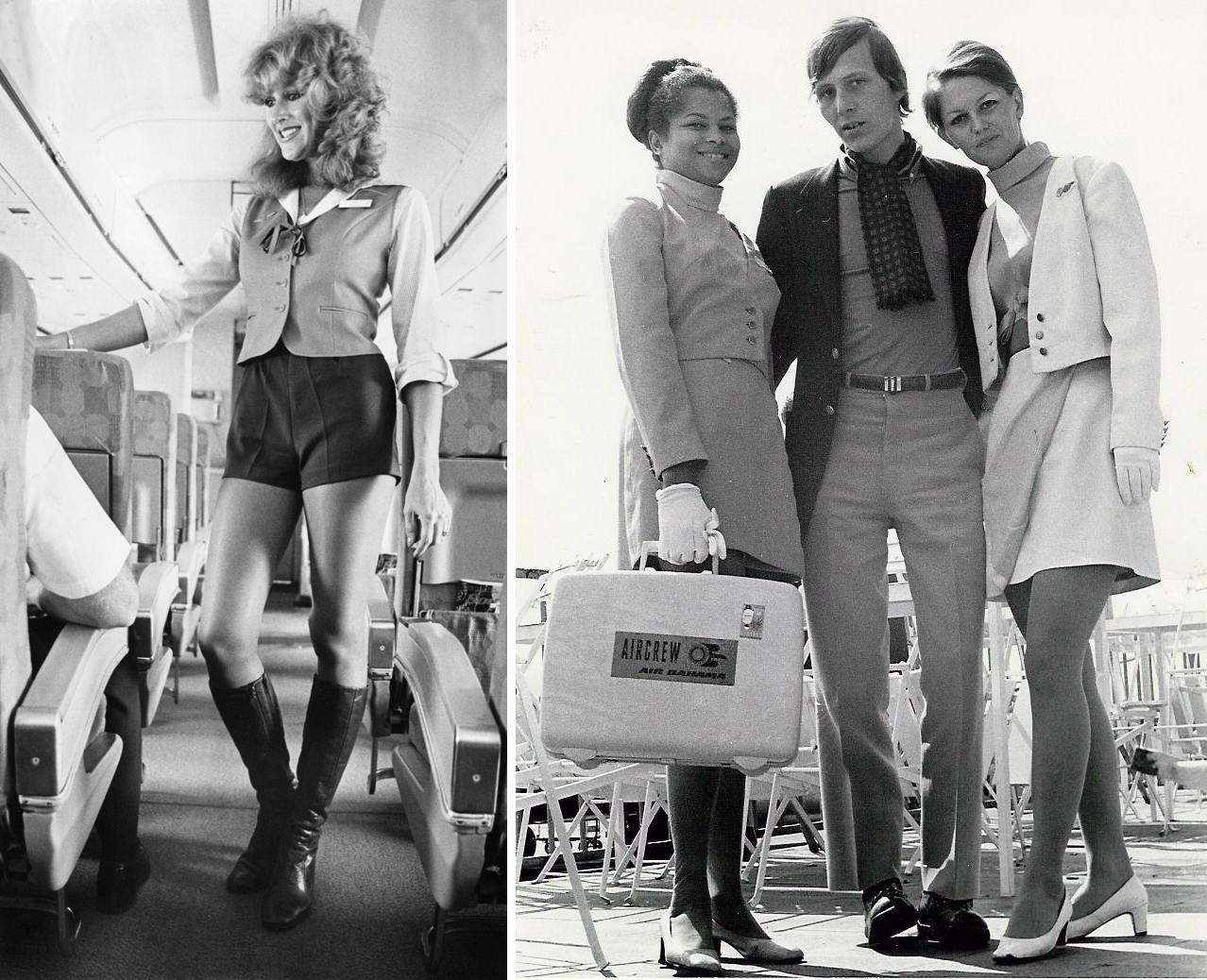 This bit from a 1979 newspaper article gives a pretty good picture of how important the whole “stewardess look” used to be:

As the flight attendant helps you adjust your seat and begins taking orders for cocktails, have you ever wondered how the airline selects her uniform? There may be a lot more to the process than you think. “We have a company image to project,” says Barbara Collins, assistant chief flight attendant. “We want the woman to look professional and subtly sexy.”

Ms. Collins stressed that PSA stewardesses have never worn slacks and never will. Skirts are feminine and show off legs, and for an airline that caters to a large percentage of businessmen, that’s a factor to consider. “We try to select designs that set our attendants apart from all the rest and we want them to look young and attractive,” she says. As part of their training, new flight attendants attend a grooming class and are then sent to a salon for advice concerning hair styles and makeup. 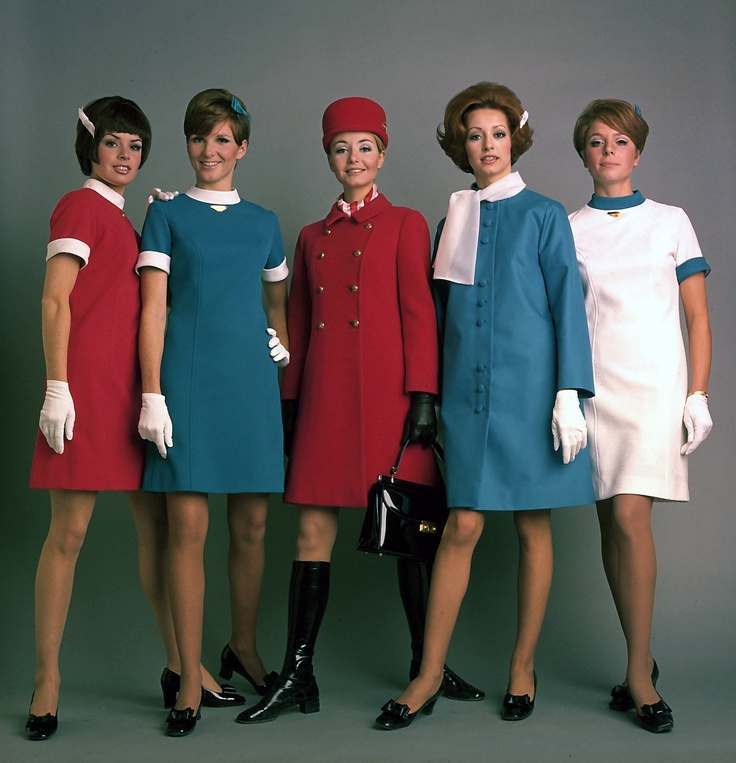 In 1969 PSA decided to open the eyes of Californians and the airline industry by introducing the unforgettable pink and orange mini-skirts worn with matching hotpants and midcalf boots. And for the total effect, stewardesses were required to wear hula orange lipstick, false eyelashes and eyeliner.

It was time again for change in 1974. Only this time it took a more conservative approach…. The retirement of the short skirts was a big disappointment for many male travelers. But for girl watchers, there is consolation in the slit in today’s PSA skirt or the two buttons left undone in the front of the jumper.

That was 1979.  Times they have certainly changed. 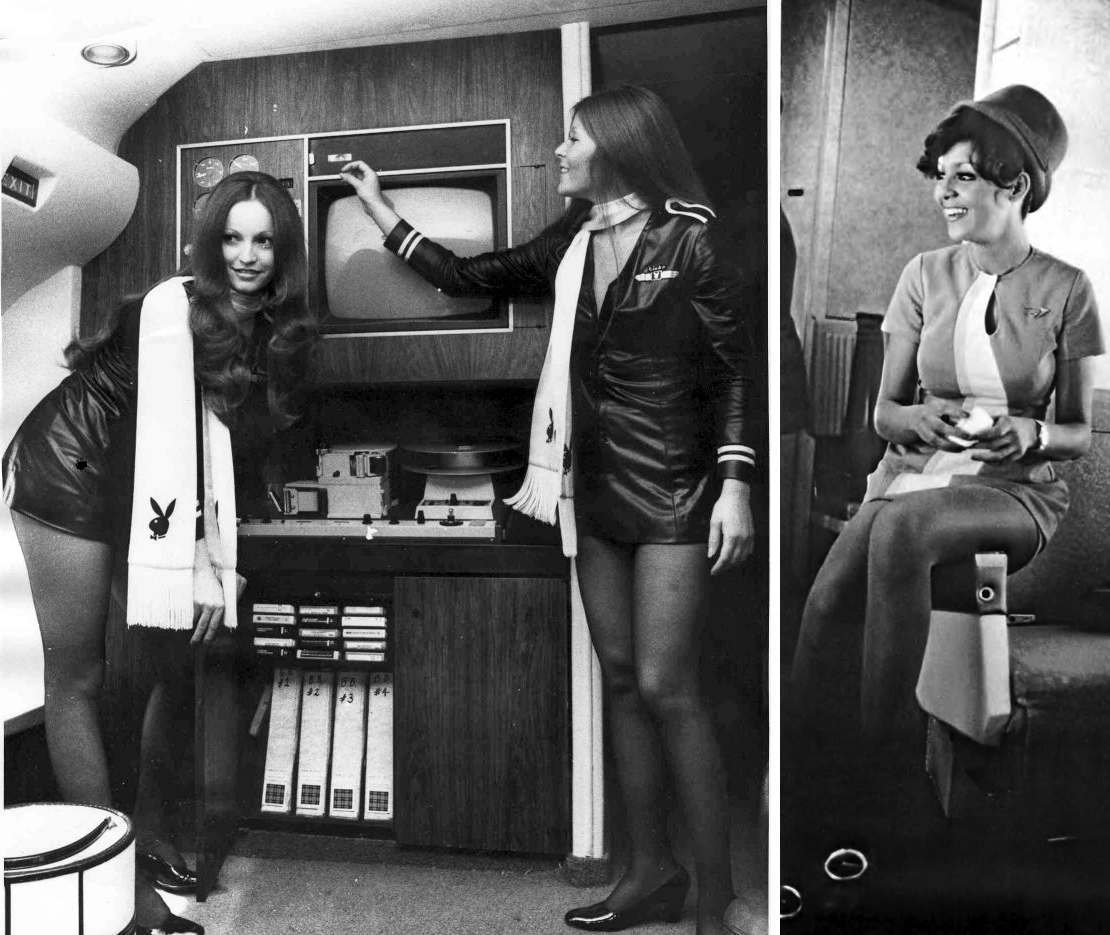 So, what have we learned?  Probably nothing other than – “things were different”.  In the end, that’s the way it was, and although some airlines like Virgin Atlantic have tried to keep the flame alive, those days are over.  To shed a tear for those days could be viewed as a misogynist’s fantasy -pining for a time before equality just doesn’t seem right.

That being said, there’s a part of me that just thinks it all looks so damn groovy.  Political correctness be damned; I’ll go ahead and say it – “Smoking hot cocktail waitresses of the sky – you are truly missed.”  Ciao baby! 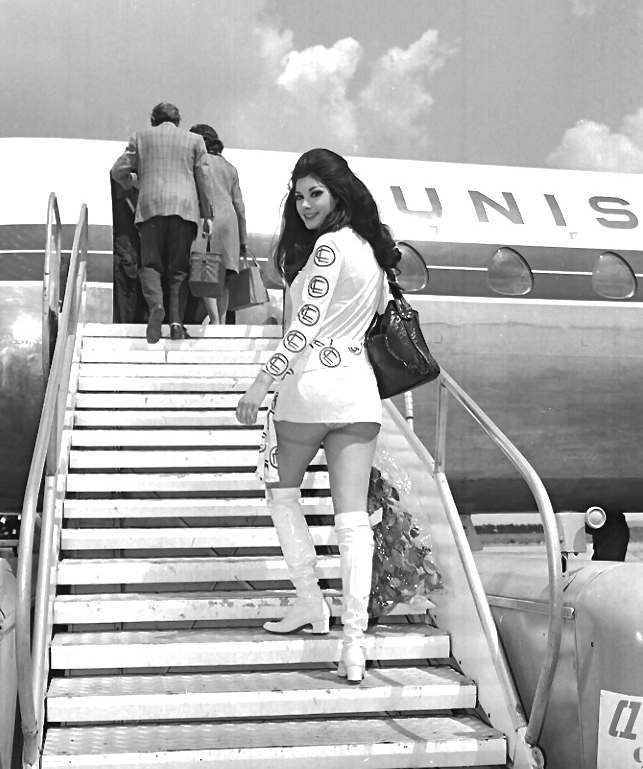