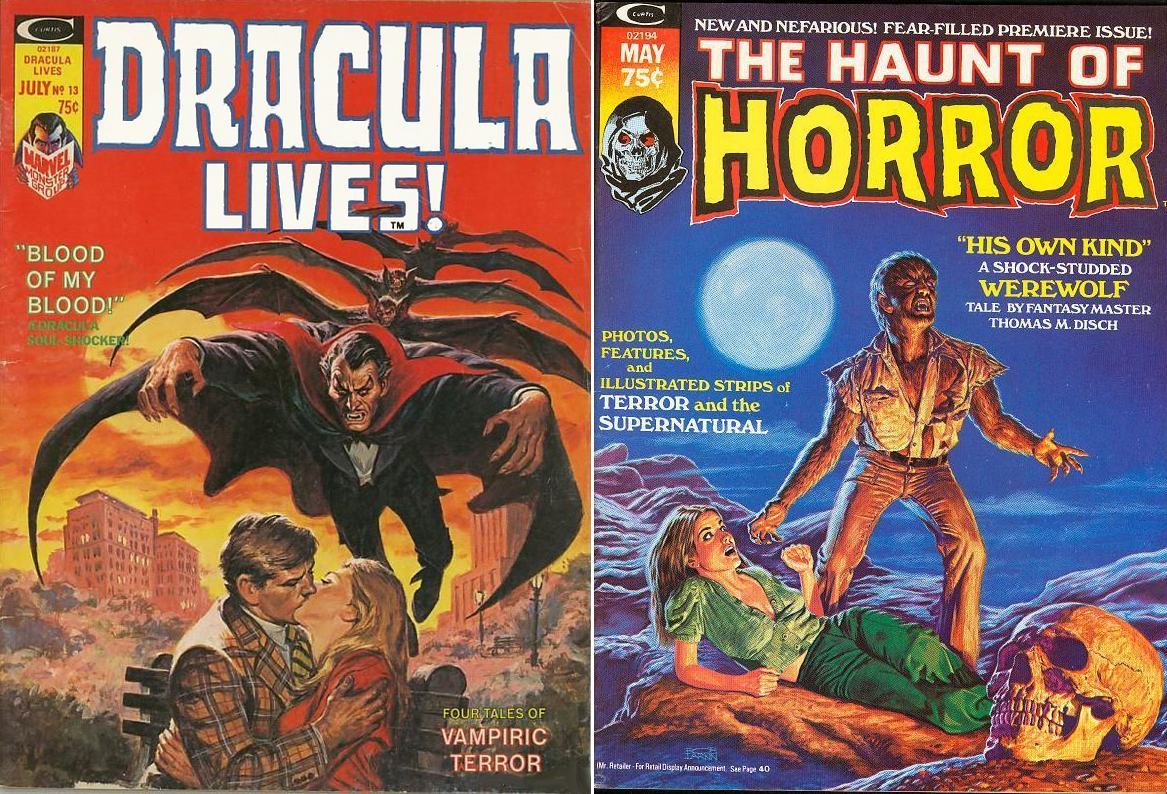 The 1950s was a Golden Age for horror comics with EC publications (Tales from the Crypt, Vault of Horror, etc.) delivering quality horror anthologies to millions of young Baby Boomers.  Then came the big crackdown (discussed here) and these comics were deemed too sadistic for young impressionable minds, and so they were vanquished from the face of the earth.

…..but there was a loophole.  Publishers could still deliver grisly tales of shock and horror as long as they kept it (1) black and white and (2) in a magazine format.  And so, four publishers  came to the fore when it came to horror comics: Warren, Skywald, Marvel and Eerie.  Let’s take a look at some of the brilliant (and, in some cases horrifically disturbing) cover art from each… 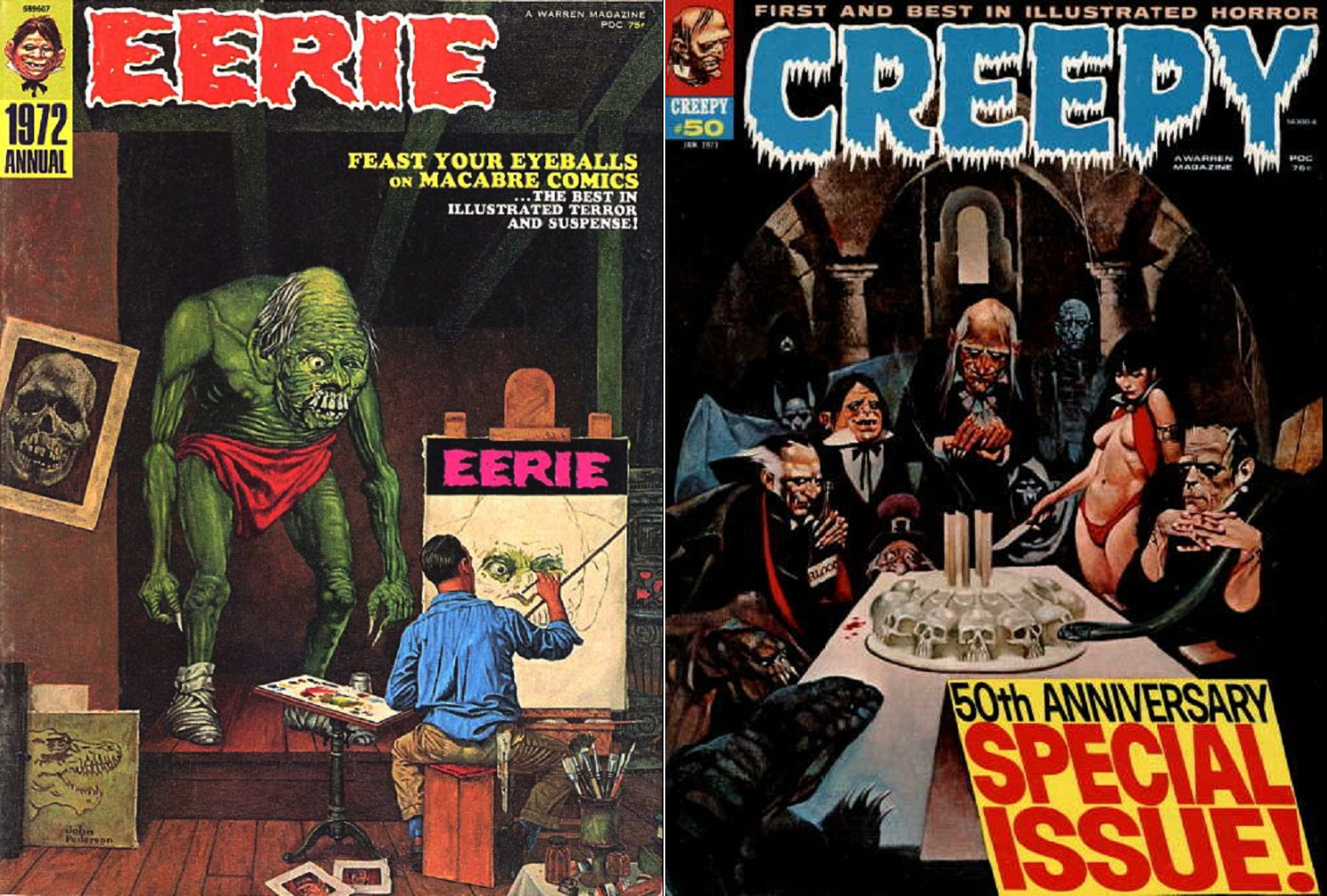 In terms of sheer creativity and artistic finesse, of the four big horror comic publishers, none came close to Warren. Recruiting the talents of Frazetta and Corben, Warren put together a triad of magazines (Vampirella, Eerie and Creepy) that brought back the full vigor and punch of those early twentieth century pulps. 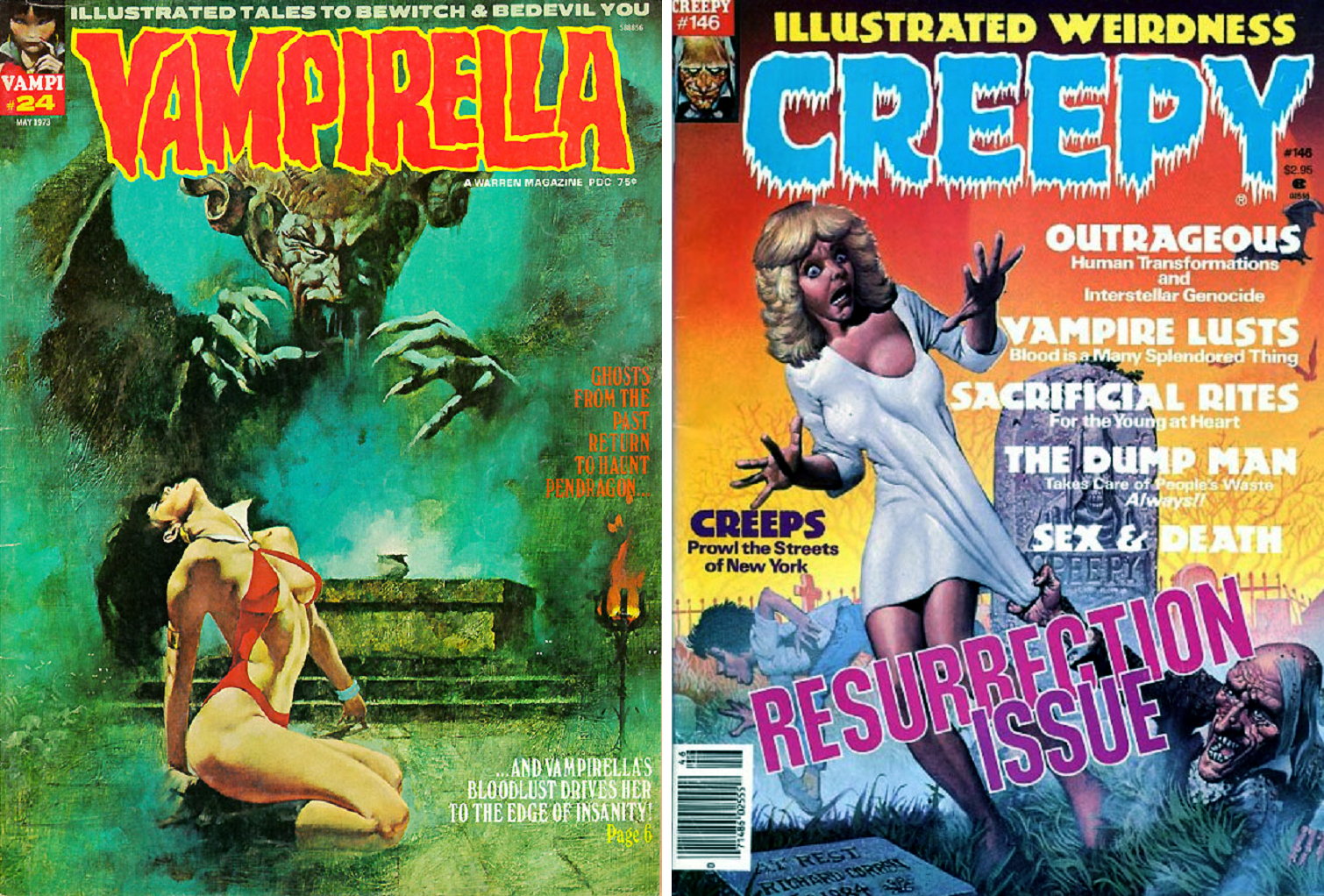 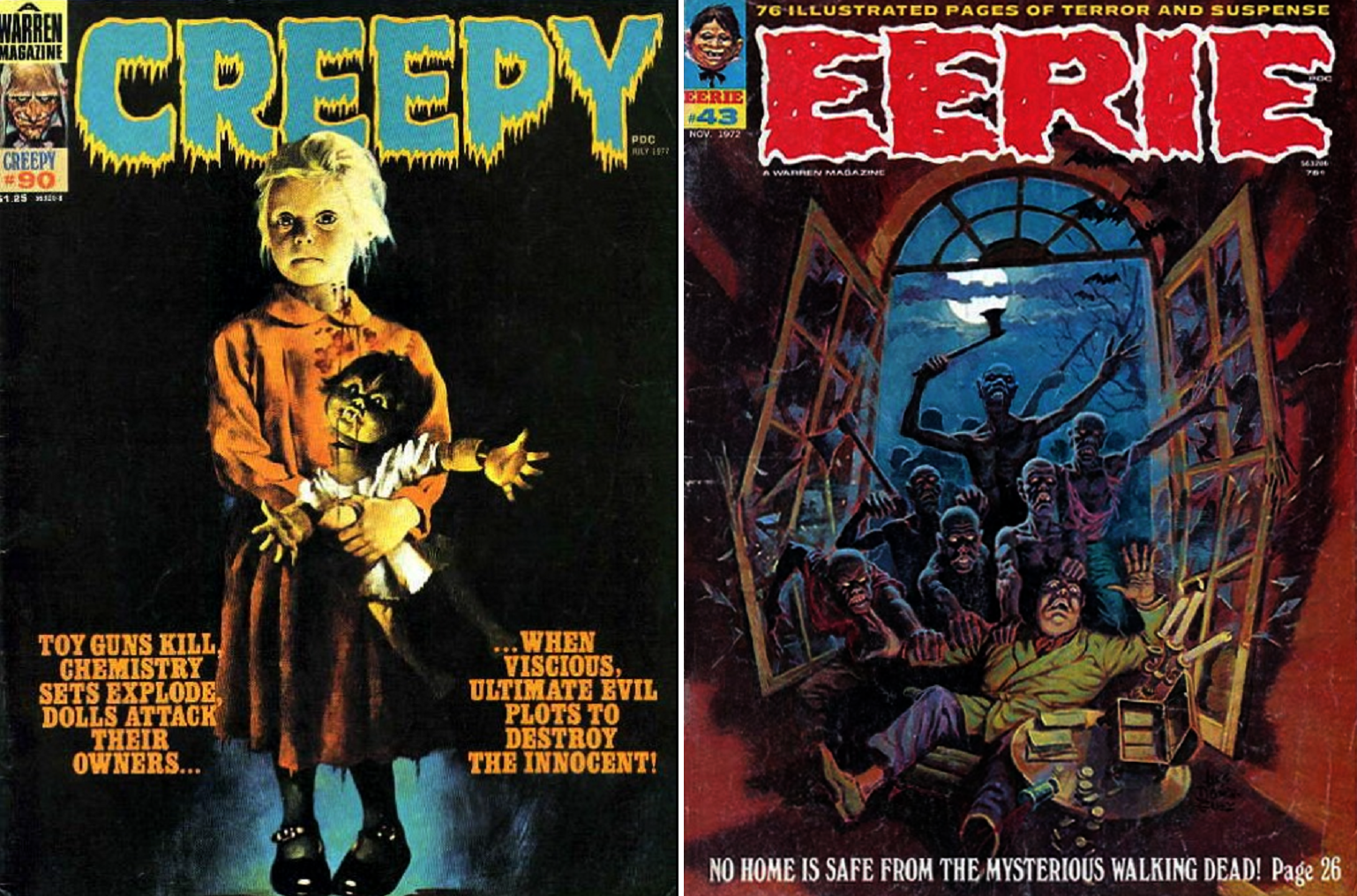 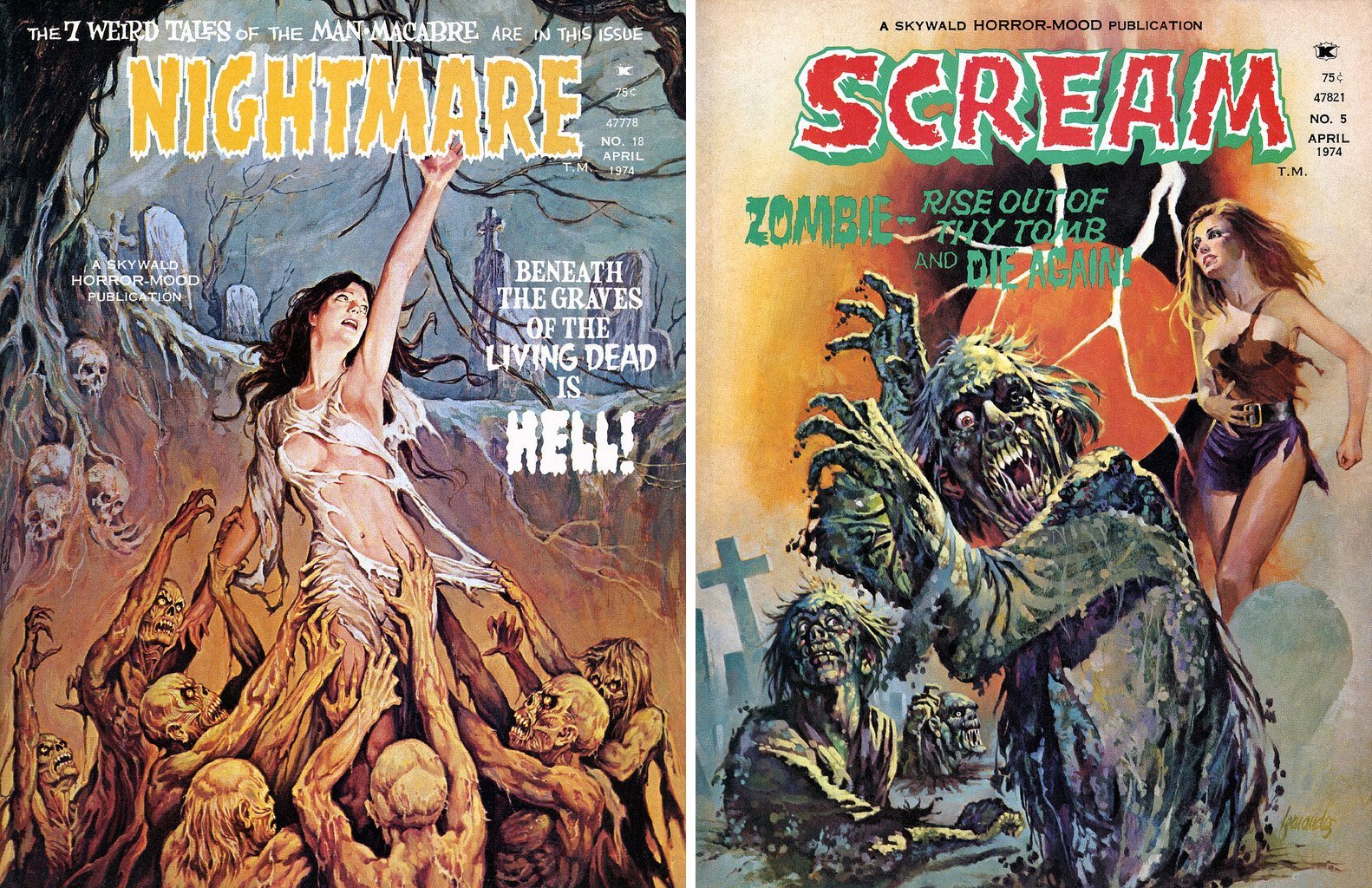 In 1970, Sol Brodsky and Herschel Waldman created a line of horror comic magazines to challenge the successful Warren publications . They called their company Skywald, and it continued to kick total ass until 1975.  According to Al Hewetson (a.k.a Archaic Al, the creative force behind Skywald), the company was undone by Marvel which flooded the market with tons of B&W horror comics. Skywald was literally drowned out of existence by the much more powerful Marvel. 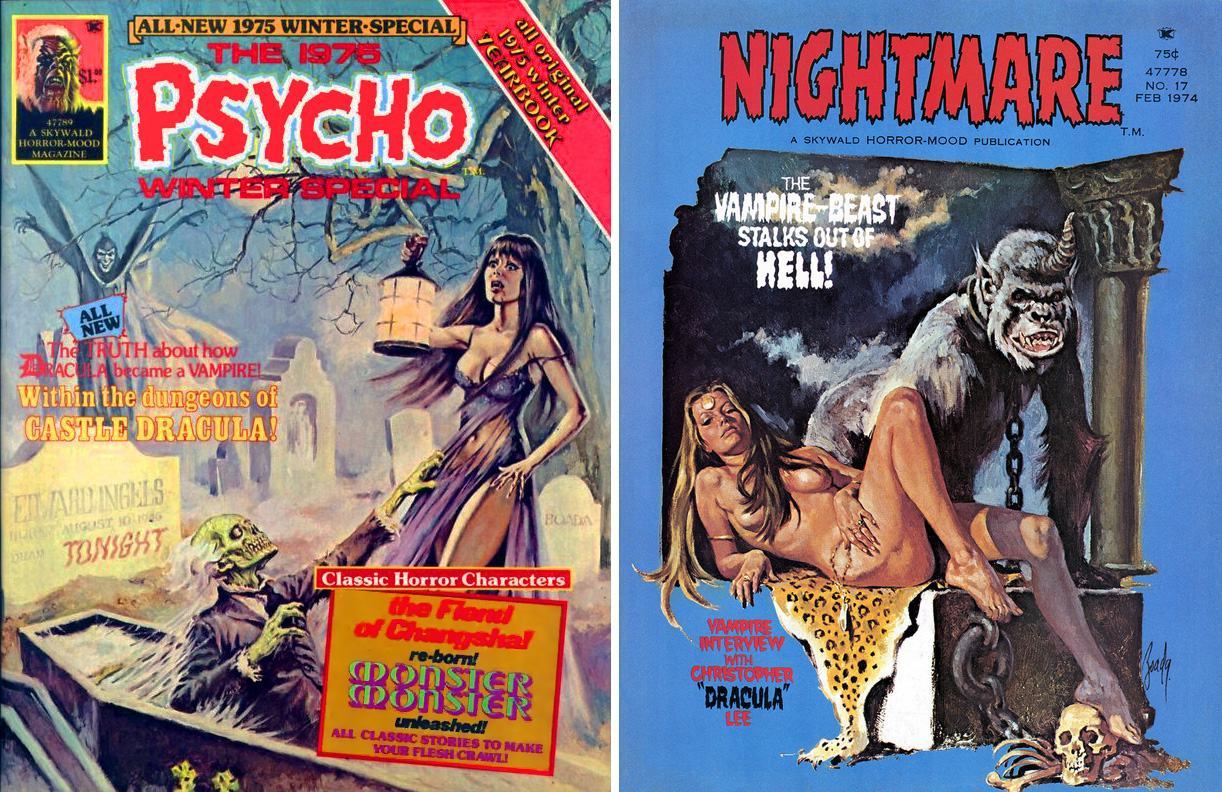 Many of Skywald’s creations were directly copied by Marvel. Their cycle superhero Hell Rider became Ghost Rider at Marvel, and the swamp monster “The Heap” became Marvel’s “The Man-Thing”. But in terms of eliciting extreme horror, Skywald could not be beat. Nightmare and Psycho explored the genre in a more frightening, sickening and gruesome manner than perhaps any pulp before or since. That’s not to say the illustrations and writing were anything but top notch; but the grindhouse style horror certainly reflected the times. 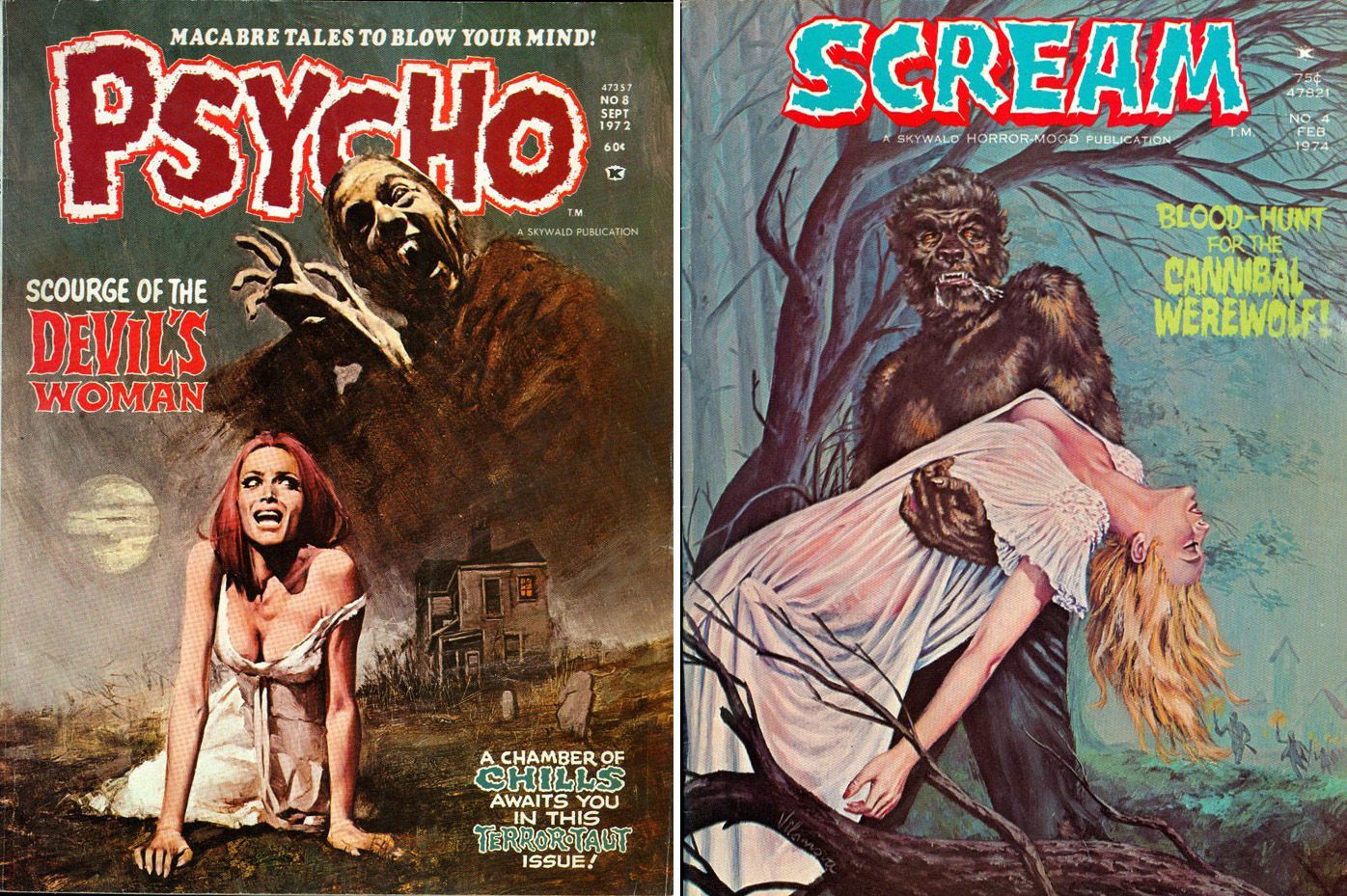 Of course, the 70s were prime time for horror, and Skywald’s more graphic brand of horror landed at the perfect time in history. Indeed, there was plenty of room for horror titles other than Warren and Skywald….

….Enter magazine publisher extraordinaire, Myron Fass, who unleashed the ungodly Eerie Publications to the 1970s, and holy crap this stuff was sick. 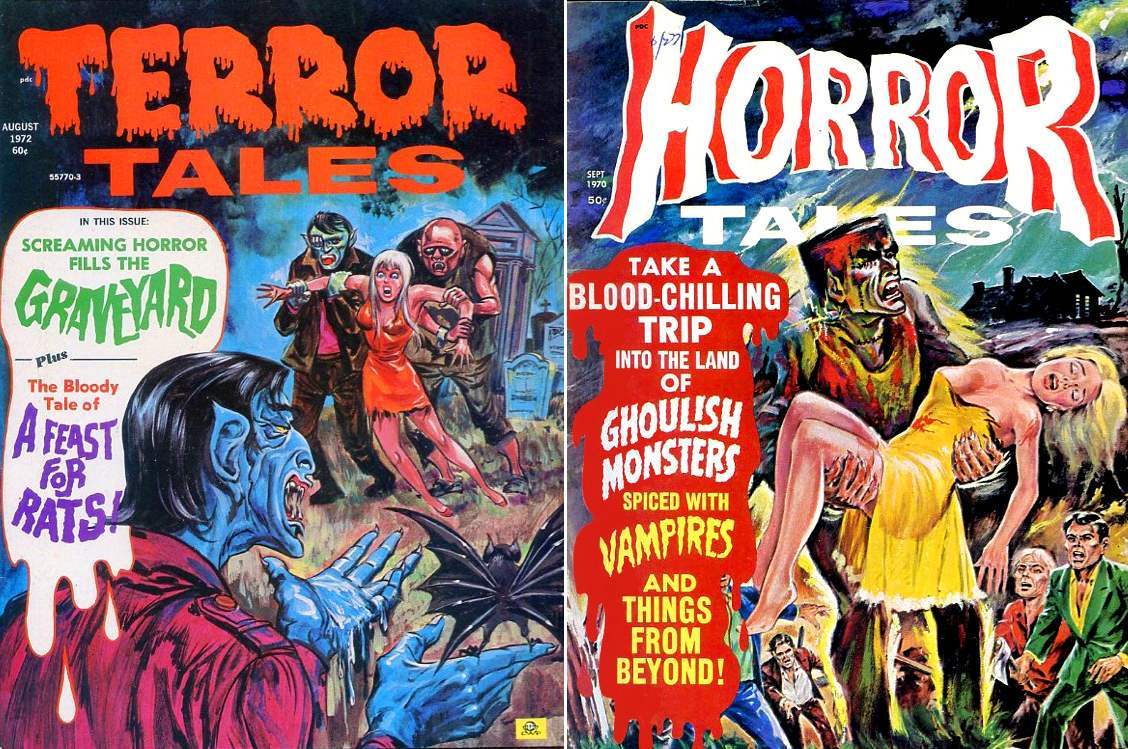 The writing wasn’t particularly good at Eerie, and the illustrations were pretty amateur (and often direct copies of 1950s comics); but what it lacked in skill, it made up for in chutzpa. Horror comics were taken to depths of depravity heretofore unheard of. 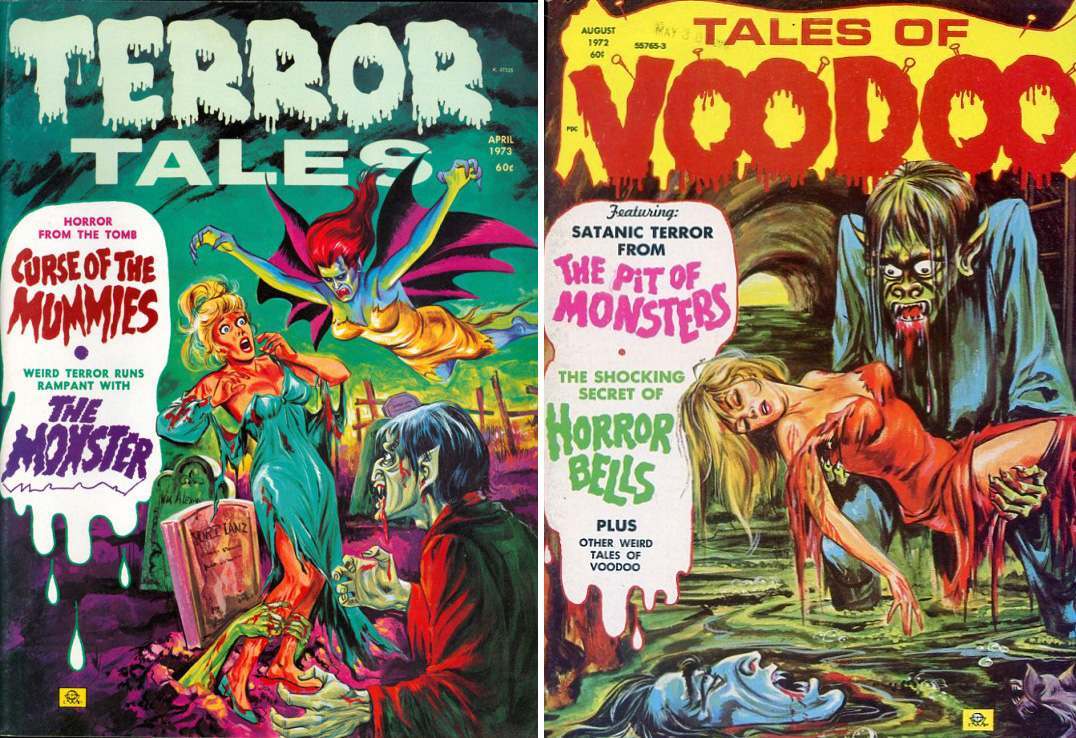 Warren had the big guns with Vampirella, Eerie, and Creepy. Skywald had some gems as well with Psycho and Nightmare. But it was Eerie Publications that totally pushed the envelope of good taste…. and boy are these comics sleazy. The art isn’t as good and the quality of writing is pretty poor; however, they are entertaining as hell if you dig this sort of thing. 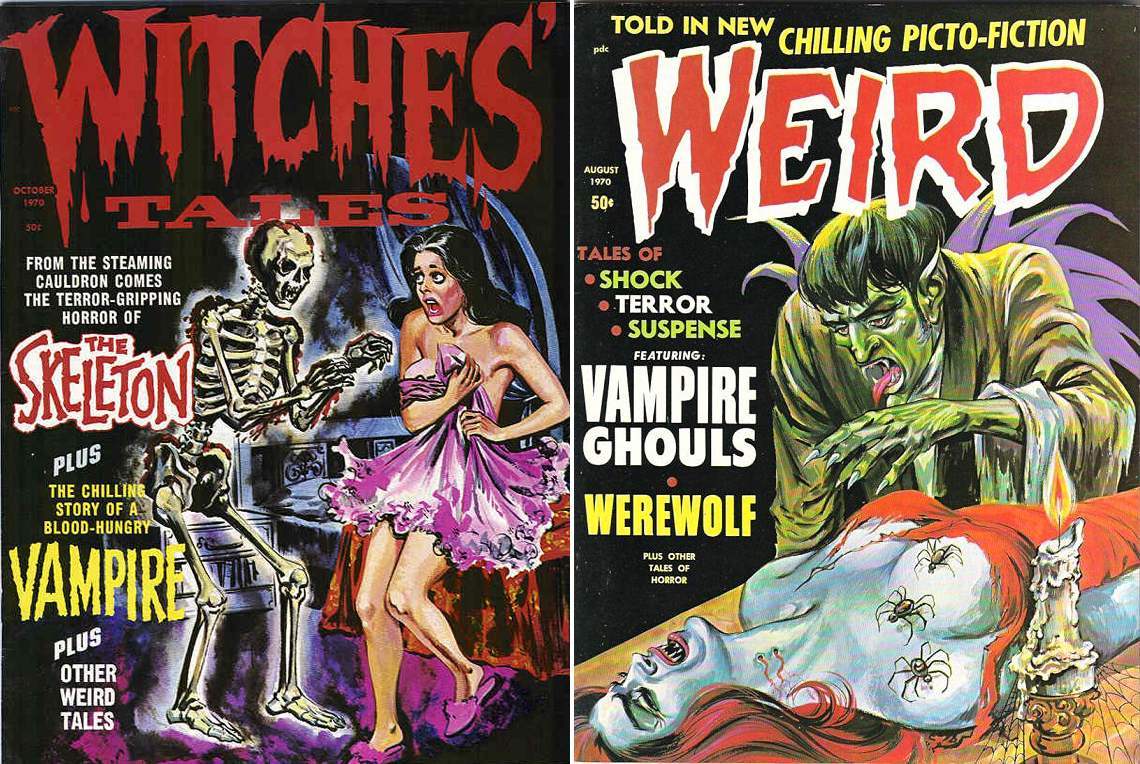 … and finally we land on the publisher that’s been blamed for driving Eerie publications and the genre itself out of business by glutting and overpowering the market…. 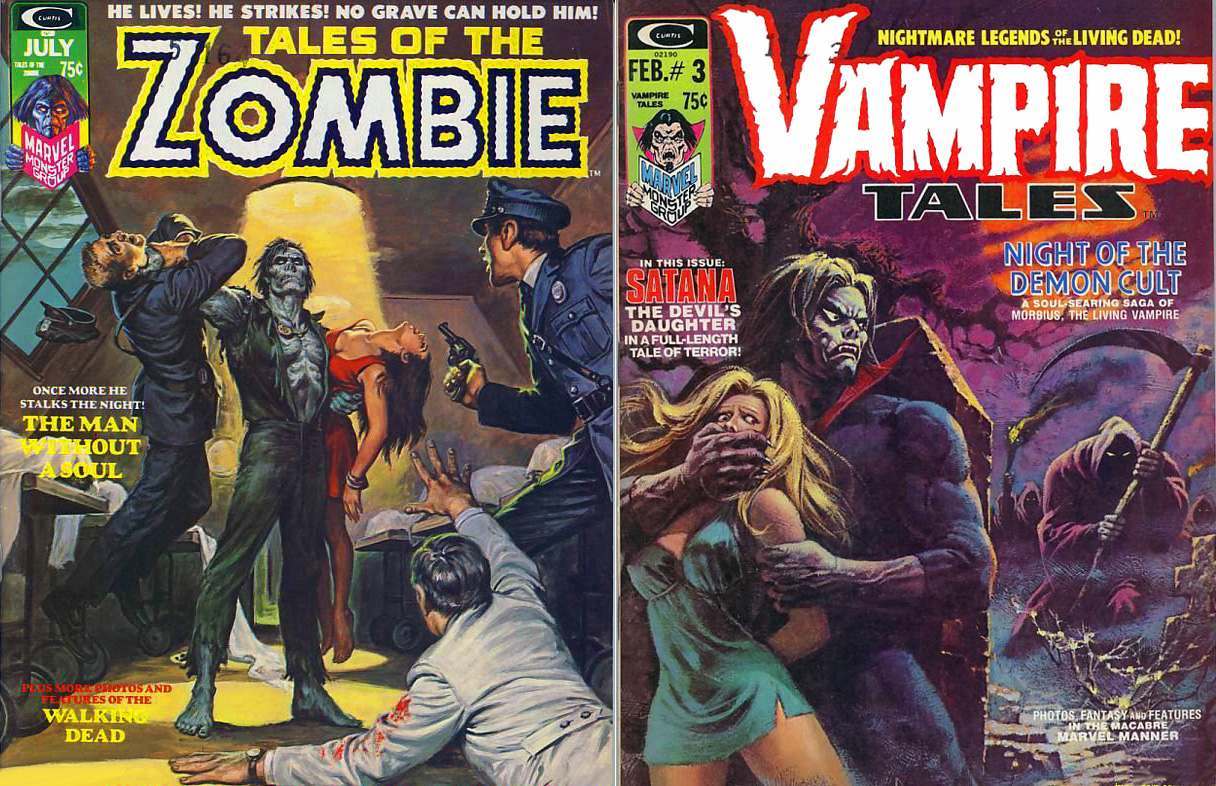 All good things come to an end, and all three  of the previously mentioned horror comics publishers saw their profits decline by the middle of the decade. Eerie and Skywald publications were defunct before the end of the Seventies, and Warren Publishing filed for bankruptcy in 1983.

I’m no insider, so I can only go on conjecture; however, I don’t think Marvel is to blame.  The Seventies were a special time suited for sleazy, nasty horror comics.  These things had no place in the Reagan Era.  There simply was a different mindset, a different time. 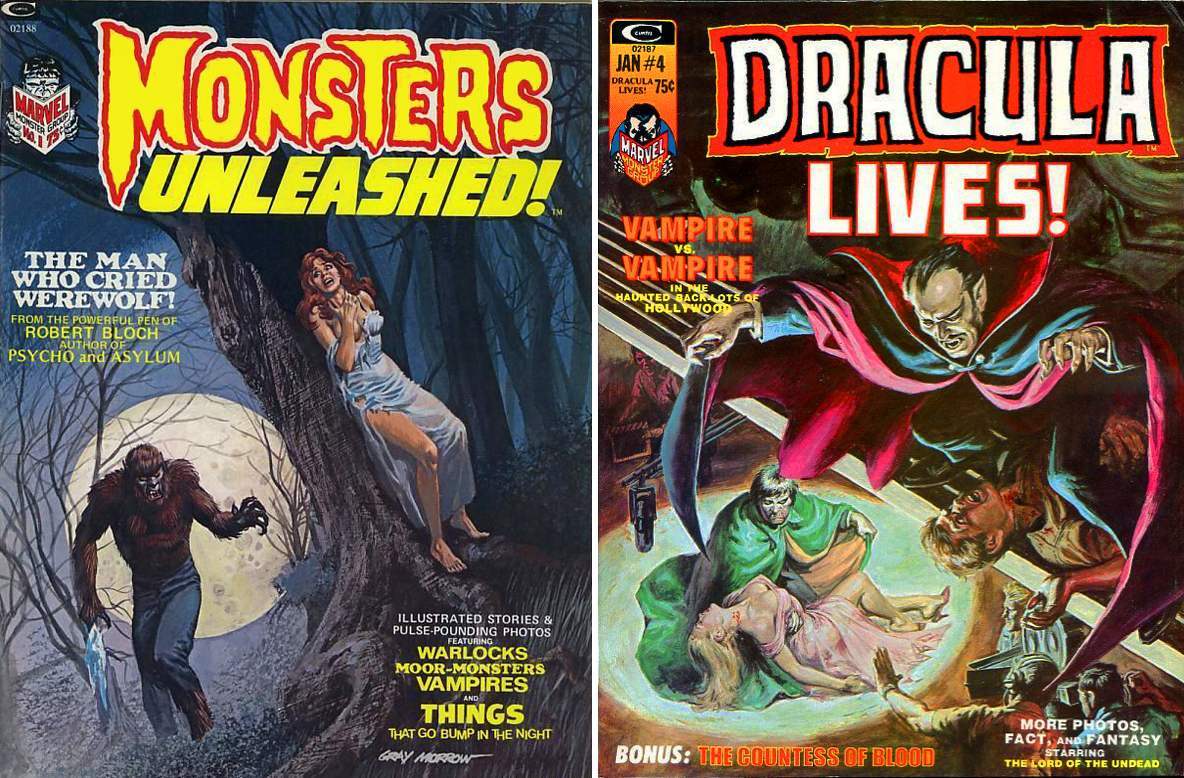