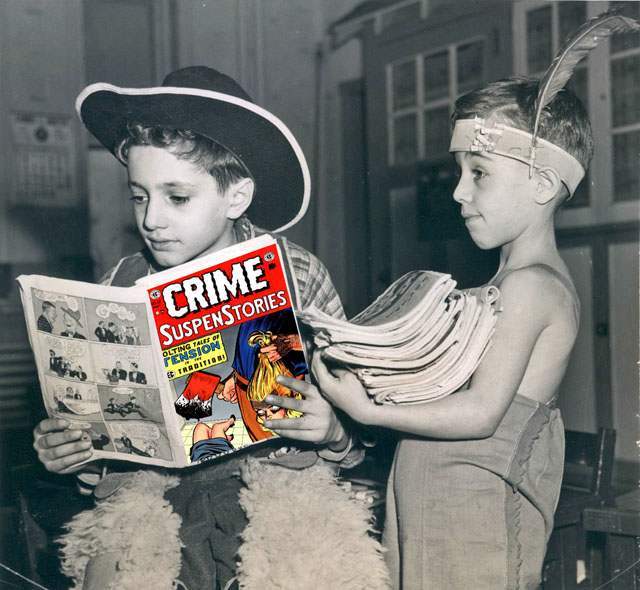 “There is no such thing as a moral or an immoral book. Books are well written or badly written.”

Dr. Wertham’s 1954 book, Seduction of the Innocent, was an American bestseller – it tapped into the fears of parents from sea to shining sea and led to the a frenzy of censorship in the comic book world.  The irony, however, is that the book was so poorly researched, that much of its content was simply made up.  Of course, the public didn’t give a baker’s f**k about facts, and Seduction of the Innocent became a sensation.

A few imaginative fabrications from the book… 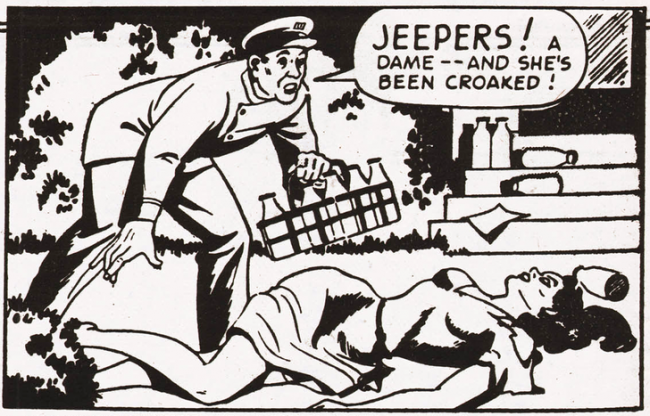 The book claimed that this woman had been raped and murdered.  First of all, if you read the source where this panel was copied, you’ll find no evidence whatsoever the girl was raped.  Perhaps, this was just Wertham’s dark fantasy, or perhaps he just wanted to spice it up for the public.  Either way, it’s not factual – not to mention this panel didn’t even come from a comic book – it came from a magazine! 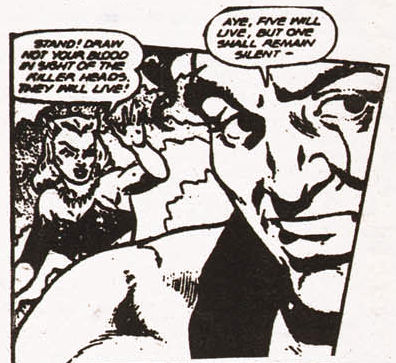 Wertham claimed that there were dirty images hidden in these comic panels. In the image above, referenced in his book, can you spot the hidden naughtiness? 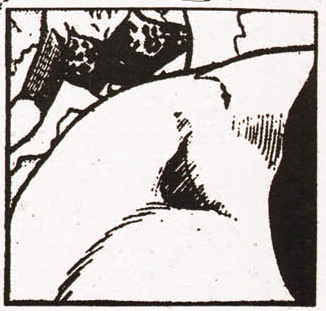 The man’s shoulder seems to resemble a woman’s pubic area.  Hmmmmm…. I have to admit, it does look like it, but I doubt I would’ve picked up on it had Wertham not pointed it out.  It makes you wonder what kind of dirty mind this Wertham guy had if he’s seeing naked chicks everywhere he looks. 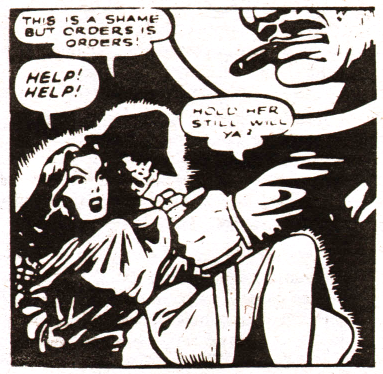 Wertham’s book said that children call these kinds of comics “headlight comics” in reference to the preponderance of epic level boobage…. but did they? It was a term used in the trade, but it was far-fetched to say kids called them anything of the sort.

I know it sounds trivial calling Wertham on semantics, but with so much actual sex and sadism going on in comics back then, one wonders why the need to make things up. Here’s the rub: Dr. Wertham may have been a dishonest pervert, but it’s a fact that comics back then were often shockingly brutal and degrading.  Thus, the Comics Code Authority was created in 1954 to deal with the public outcry against comics like this one from 1947. 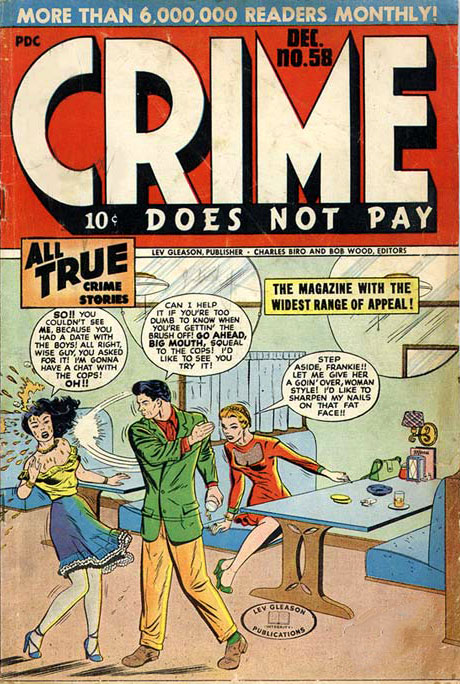 “Step aside, Frankie!! Let me give her a goin’ over, woman style! I’d like to sharpen my nails on that fat face!!”

Unfortunately, the code ended up being just as over the top as the comics they were trying to regulate with ridiculous rules such as “In every instance good shall triumph over evil and the criminal punished for his misdeeds.” The code also has the dubious distinction of bringing down the creative and talented powerhouse of EC comics. Tales from the Crypt was no more (but their publisher, William Gaines, would go on to success with MAD magazine). 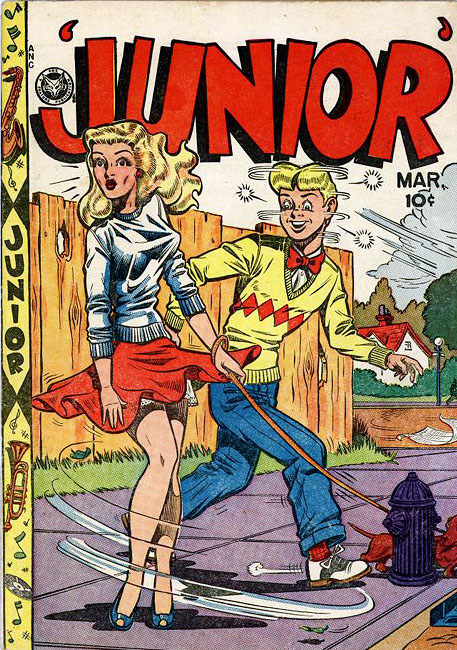 For an example, one stipulation of the code was that “Females shall be drawn realistically without exaggeration of any physical qualities.” Thus, even Junior (Fox Features’ answer to the Archie comics) wouldn’t pass the test.

And speaking on not passing tests, the most infamous example is issue number 22 of Crime SuspenStories (1954)…. 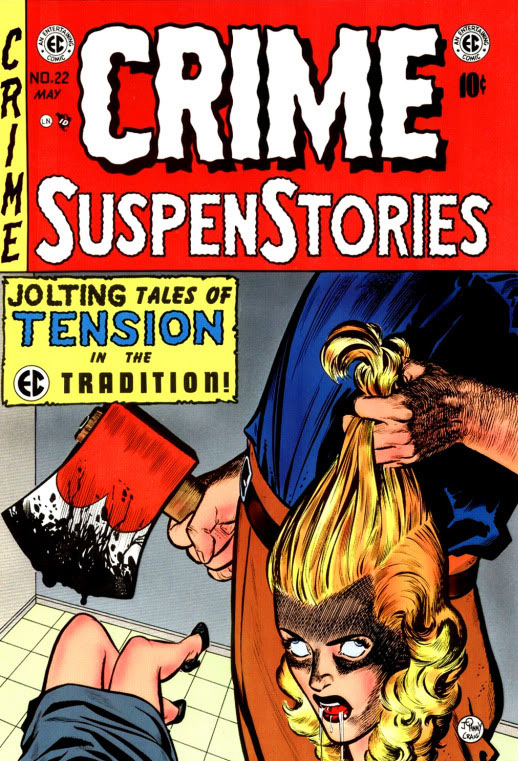 When the Senate Committee of the Judiciary to Investigate Juvenile Delinquency began hearings in New York City in 1954, this particular cover caught the eye of Senator Estes Kefauver. William Gaines, the publisher of E.C. Comics, was put in the awkward position of having to defend the cover:

“Here is your May issue. This seems to be a man with a bloody axe holding a woman’s head up, which has been severed from her body. Do you think that’s in good taste?” asked Kefauver.

“Yes, sir, I do…for the cover of a horror comic. A cover in bad taste, for example, might be defined as holding the head a little higher so that blood could be seen dripping from it, and moving the body over a little further so that the neck of the body could be seen to be bloody,” replied Gaines.

“You’ve got blood coming out of her mouth.”

By the end of the day, William Gaines had achieved nationwide notoriety and crime comics had been pronounced guilty of corrupting the youth of America.

It’s easy to jump on the anti-censorship bandwagon in this case – especially when the censors were behaving so irrationally.  However, nothing is ever black and white (okay, many of these comics were indeed black and white, but let’s not get technical).  As I stated earlier, comics of the 40s and 50s could be shockingly brutal and degrading. 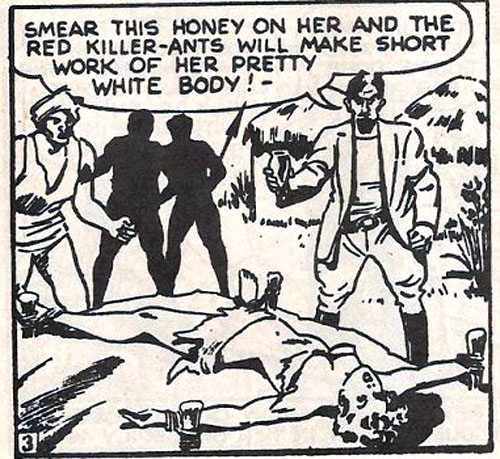 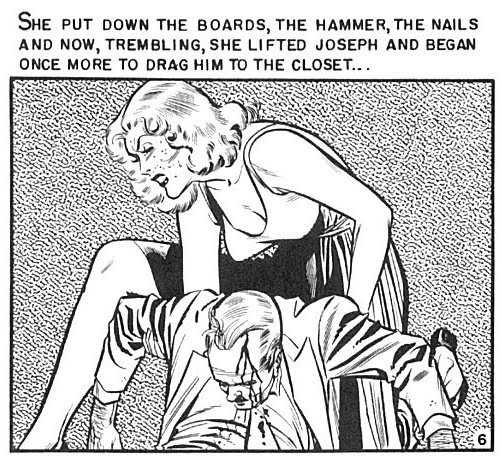 Truth be told, pre-code comics could often be more graphic than anything you’re likely to see today. Comics prior to the 1954 Comics Code were straight up harsh – there’s no other word for it.

Here are a few of the guidelines set up by the Comics Code Authority alonside a few pre-code panels.  Perhaps you’ll see that America’s outrage wasn’t one-hundred percent unfounded. 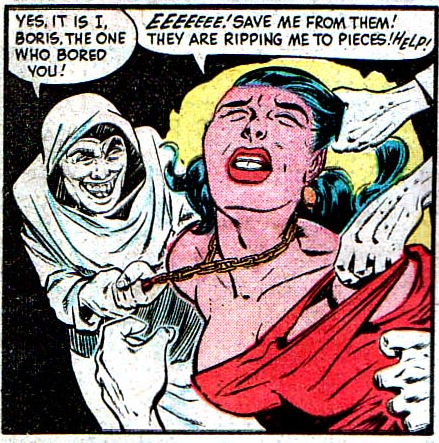 CCA Guideline: “Scenes of excessive violence shall be prohibited. Scenes of brutal torture, excessive and unnecessary knife and gunplay, physical agony, gory and gruesome crime shall be eliminated.” 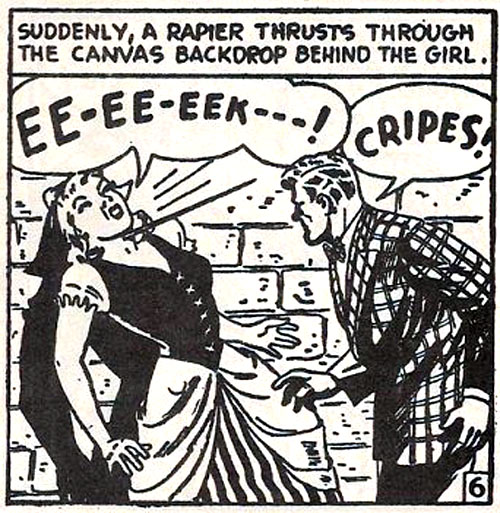 I know “Cripes!” is the first thing that would drop from my lips if a dame were just impaled through the throat on a rapier!

Keep in mind – these are kids’ comics.  These horrific panels appeared alongside adverts for toys and candy. 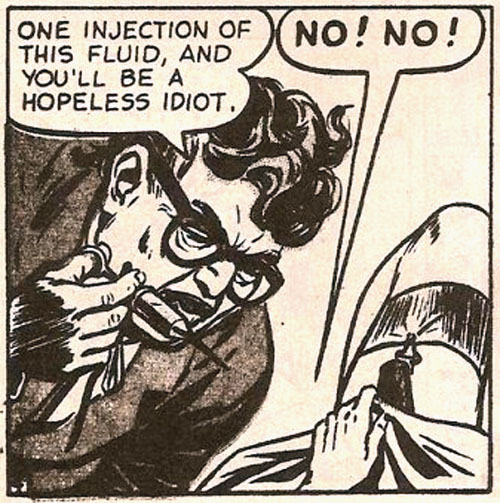 Nothing but good, old-fashioned violent misogyny displayed here! Of course these were for children; they had to learn it somehow. 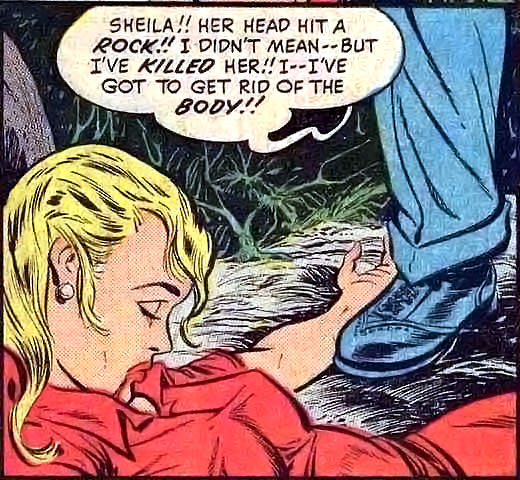 It should also be noted that nearly all the violence in the horror comics was directed towards women.  The crime comics at least seemed to offer equal-opportunity murders. 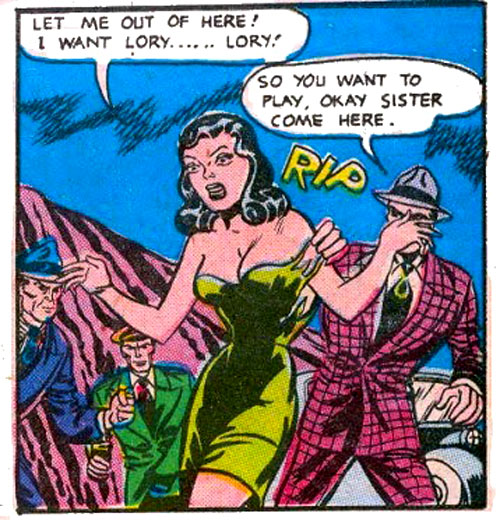 CCA Guideline: “Clothed figures shall never be presented in such a way as to be offensive or contrary to good taste or morals.” 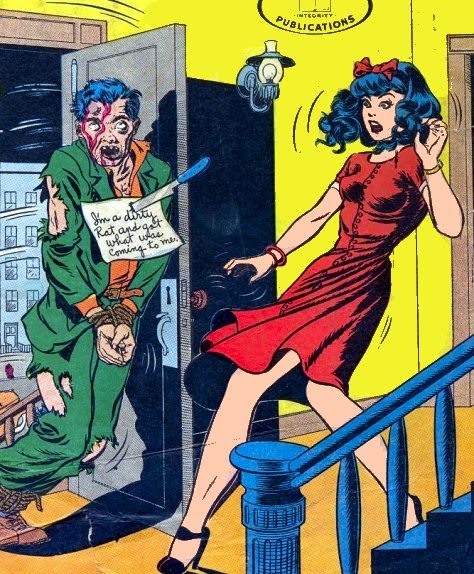 CCA Guideline: “All lurid, unsavory, gruesome illustrations shall be eliminated.” 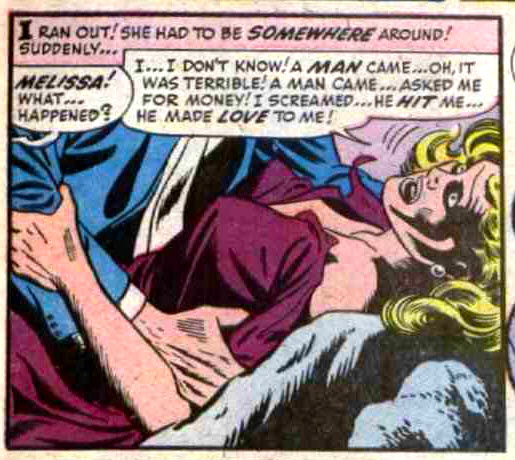 Nothing like a good old fashioned rape alongside adverts for Twinkies and bubble gum. 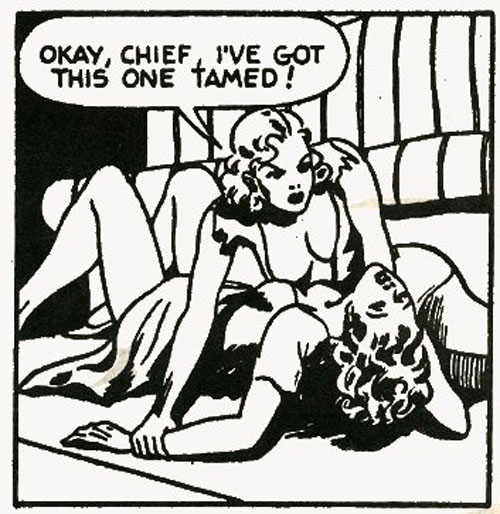 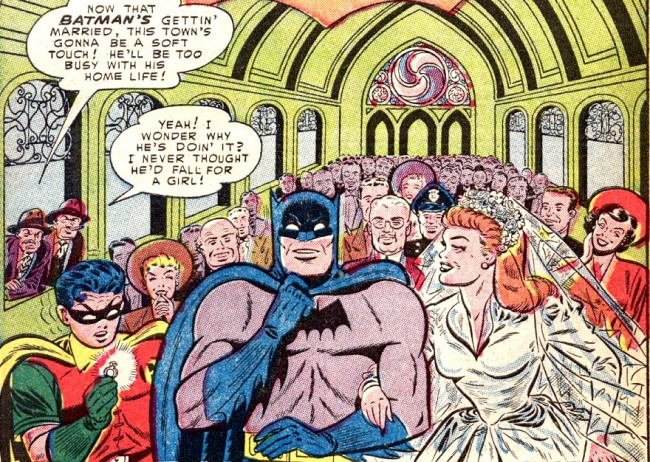 Of course, the inevitable question is where exactly to draw the line. While the comics may have gotten out of hand from time to time, the ever-perverted Wertham would even have Batman comics banned. Stating that “Batman and Robin inhabit a wish dream of two homosexuals living together”, living in “sumptuous quarters, unencumbered by wives and girlfriends, with only an aged butler for company.” He claimed depictions of Batman and Robin were “frequently homoerotic, visually emphasizing Batman’s rippling physique and Robin’s splayed, bare thighs.” 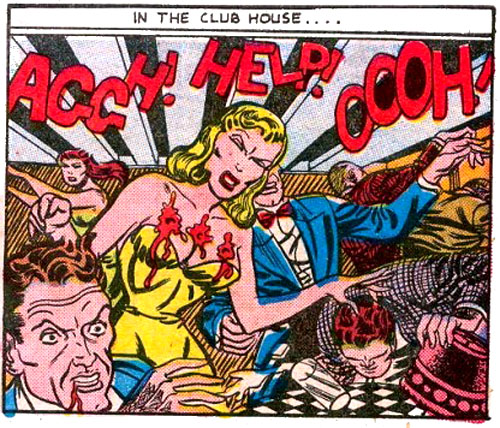 Not surprisingly, juvenile delinquency did NOT decline after the institution of the comics code. And also not surprisingly, creative people found ways to bypass the rigorous code. One way was to issue the comics in magazine format – no longer technically a comic and therefore not bound by the code.

Eventually the code was modified, the sad truth behind the Wertham’s “research” was revealed, and the code’s influence shrunk to insignificance. Today only Archie comics and a few DC lines submit their comics for approval. Wertham would be so disappointed. 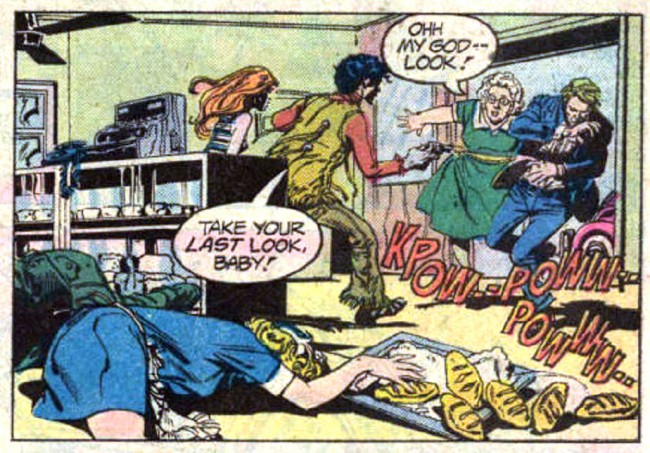