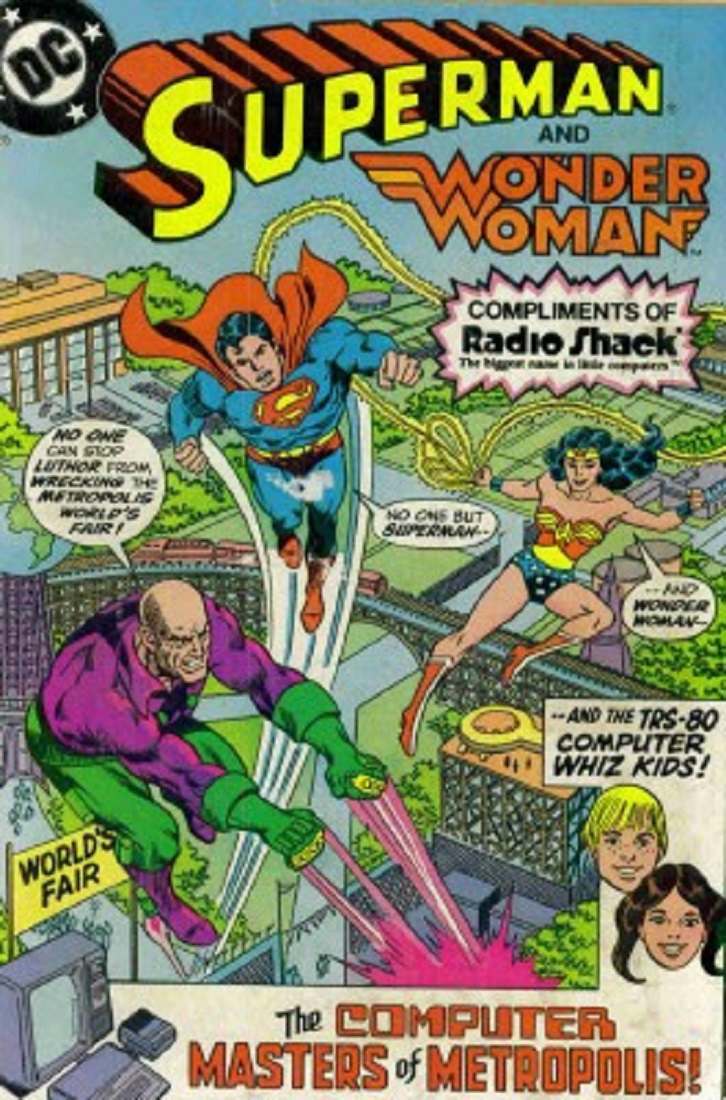 Way back in 1982, Radio Shack — “the biggest name in little computers” — and DC Comics combined forces to promote home computing, and in particular, the home computer called TRS-80.

Superman and Wonder Woman headline “The Computer Masters of Metropolis,” a comic penned by Paul Kupperberg and featuring art by Curt Swan and Frank Chiaramonte.

The tale commences with middle-school students Alec and Shanna – “the computer whiz kids” — happily tapping away on their TRS 80s in class, when Wonder Woman arrives and promises to escort the students to the World’s Fair, being held this year in Metropolis. The theme of the Fair: science and technological improvements in the 1980s. 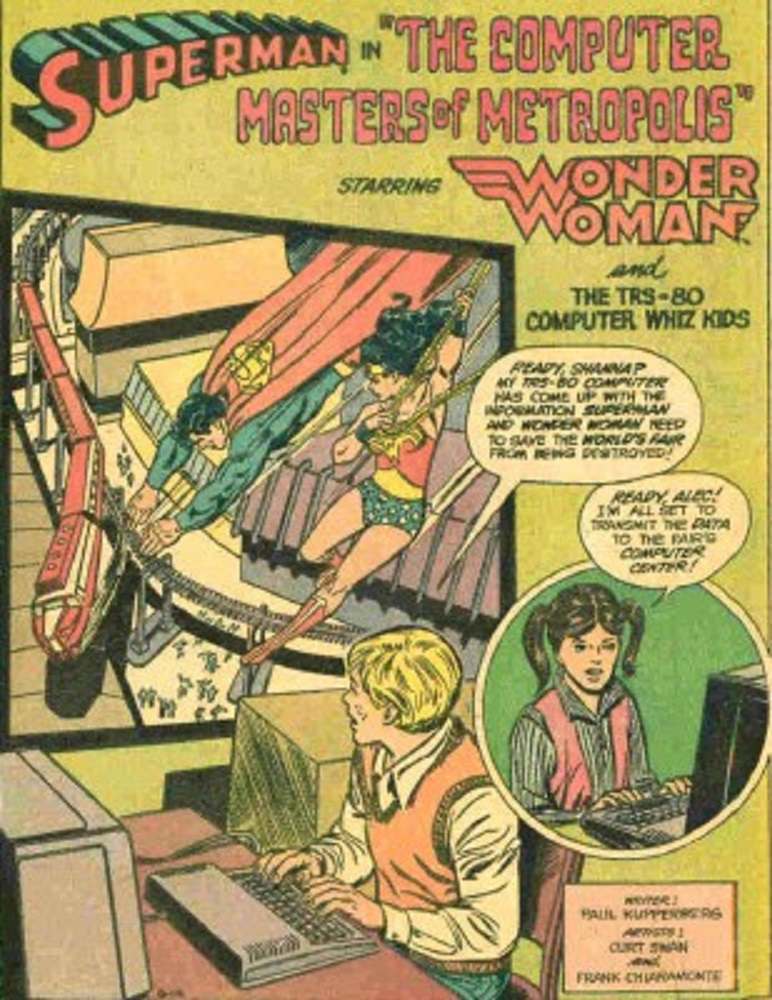 Unfortunately, the evil Lex Luthor will destroy the World’s Fair unless he is paid a billion dollars. And he has incapacitated Superman with dangerous red solar energy! But Alex, Shanna, and the TRS-180 are available to save the day, thereby making the students the “computer masters of Metropolis.”

One of the most interesting aspects of this promotional comic for Radio Shack and its product, the TRS-80 is Wonder Woman’s informative classroom lesson on computers.

“Computers had their beginning in the United States, when the world’s first all-electronic unit was completed in the fall of 1945,” she explains.

Wonder Woman then makes a powerful prediction: that one day computers will share “everything from national weather reports to up-to-the-minute news reports from a major wire services.”

People will even be able to “play games…with people thousands of miles away,” and consumers can “can go shopping through a computerized catalog.”

So, absolutely, Wonder Woman predicted the nature and capabilities of the Internet!

This comic-book also features a glossary of terms of computer like “BASIC,” “byte,” “cassette”, “RAM” and “software.” There’s even “Quick Quiz” in the back of the mag too, and advertisement for a computer scholarship for teachers.

I think this DC comic may have served its promotional purpose very well, back in the day.  In my sixth grade Math class, for example, we had a room filled with TRS-80s. My teacher must have been a DC fan. 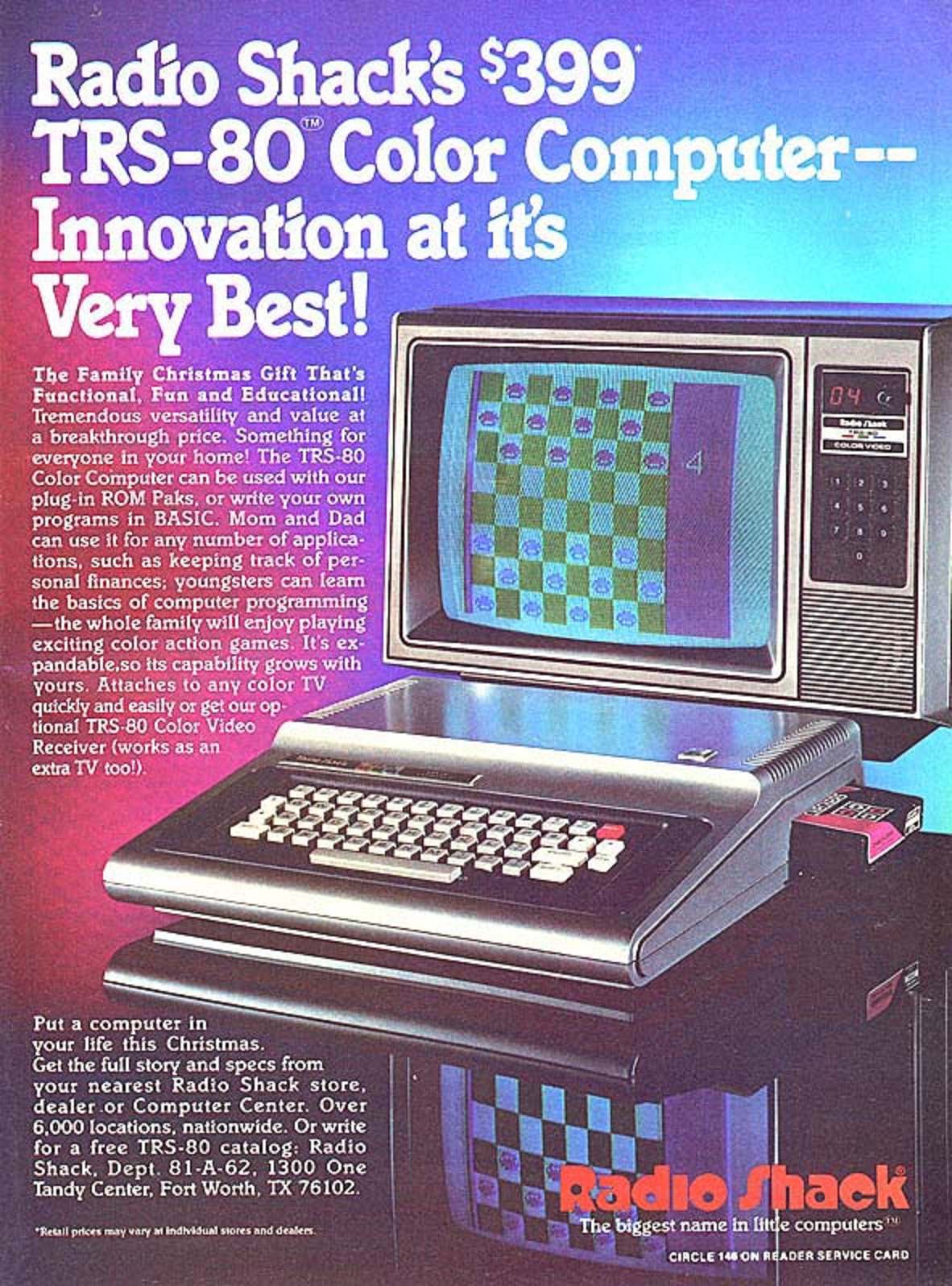