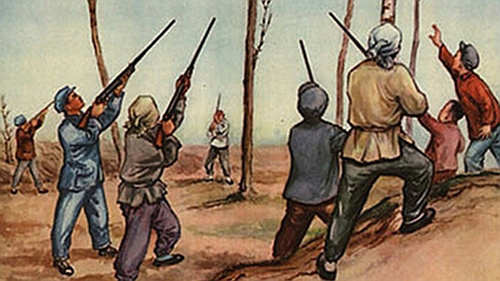 Mao had made his selection. Panda bears, worms and even the dreaded moth would be allowed to thrive. His murderous hatred of sparrows held sway. The people would be mobilised for the huge cull on an enemy of the common good. 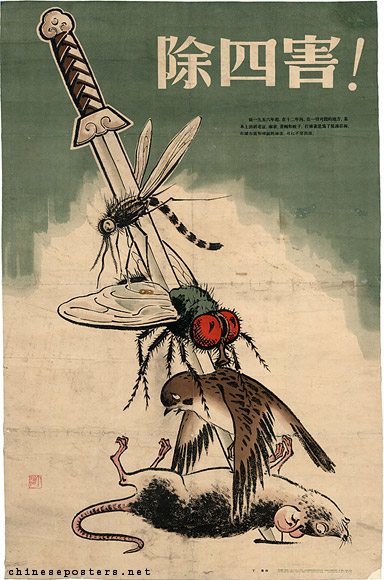 The birds’ problem was that sparrows are enthusiastic eaters of grain seeds – each bird consuming an average of 4.5kg of grain each year (source: China’s sparrow scientists). The maths was simple: kill 1m sparrows and save enough food to feed 60,000 humans. 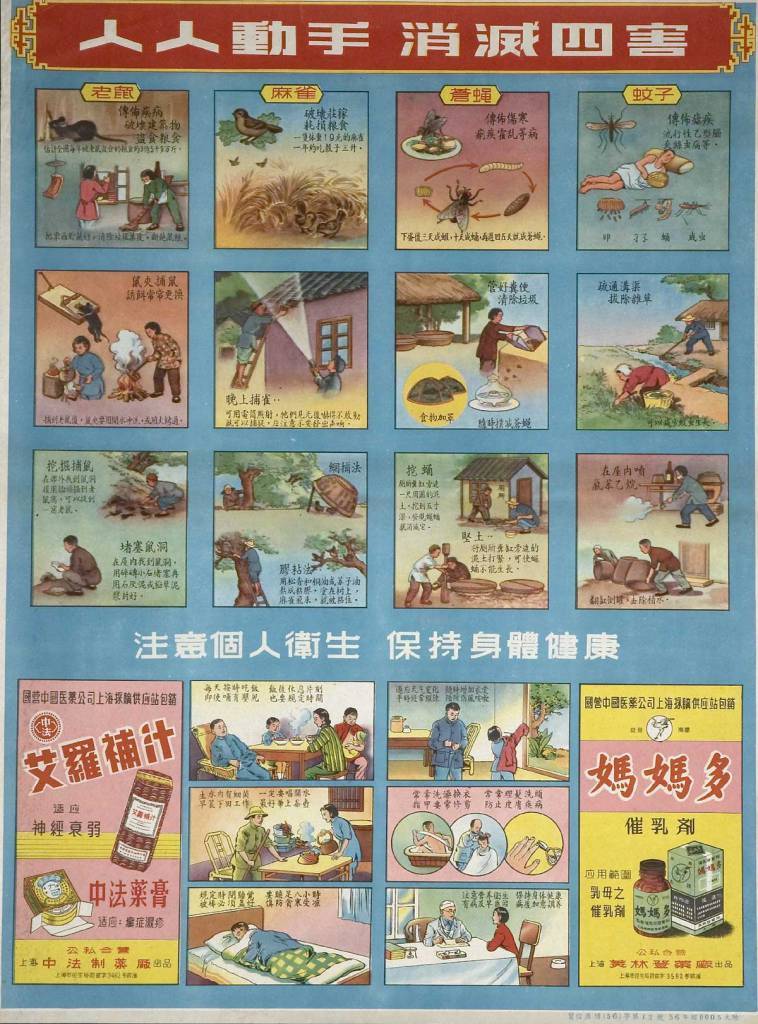 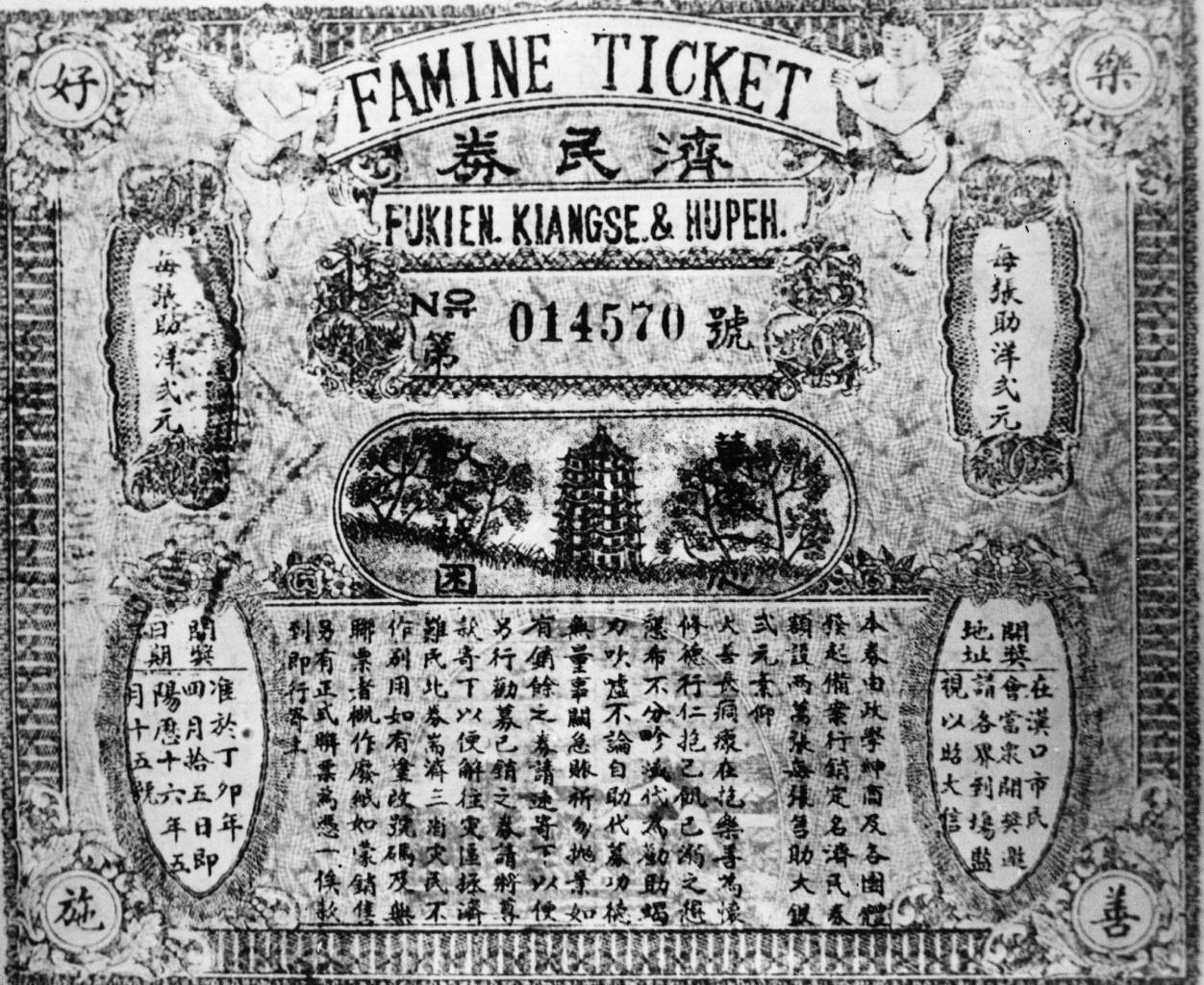 1927: A famine ticket, circulated amongst the Chinese in Shanghai by Chinese Communists during a period of mass starvation. The tickets state that the British are responsible for the famine. (Photo by Keystone/Getty Images)

Mao wanted to drag China into the industrial age. 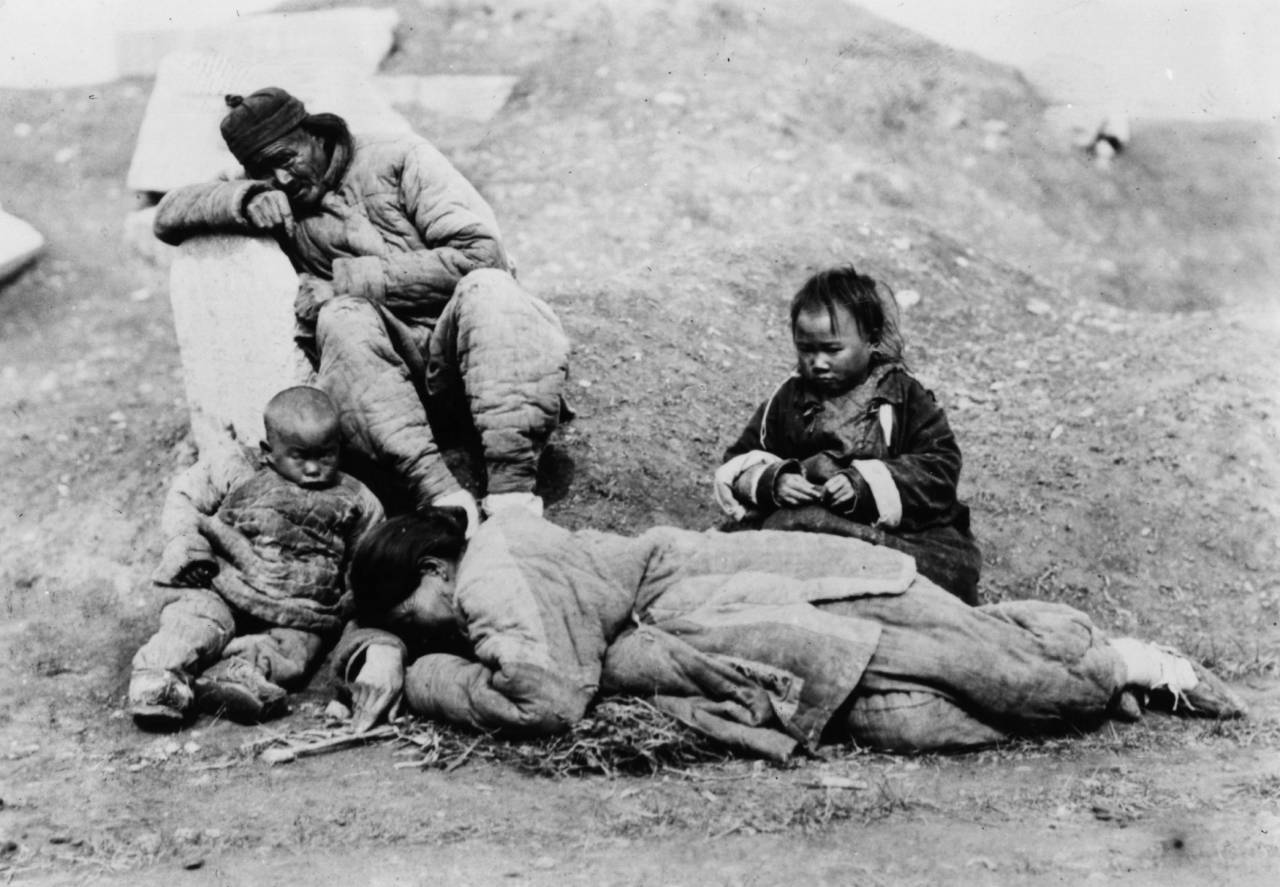 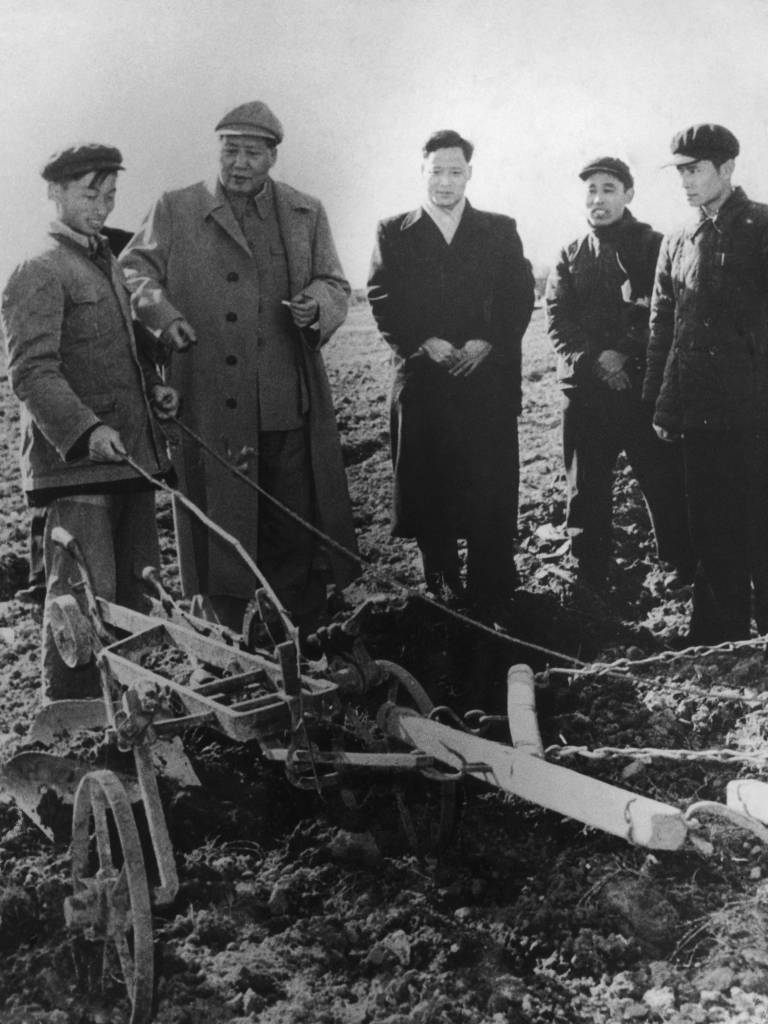 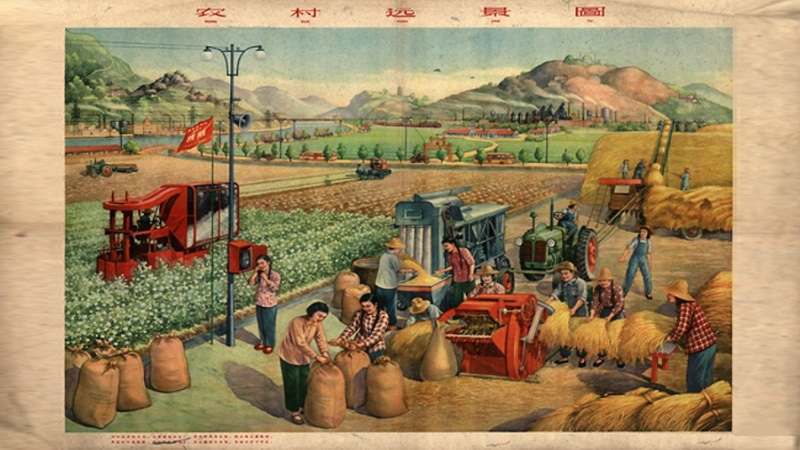 The future of the rural village in China (1958)

The war on small feathery animals was spread by word of mouth, newspapers… 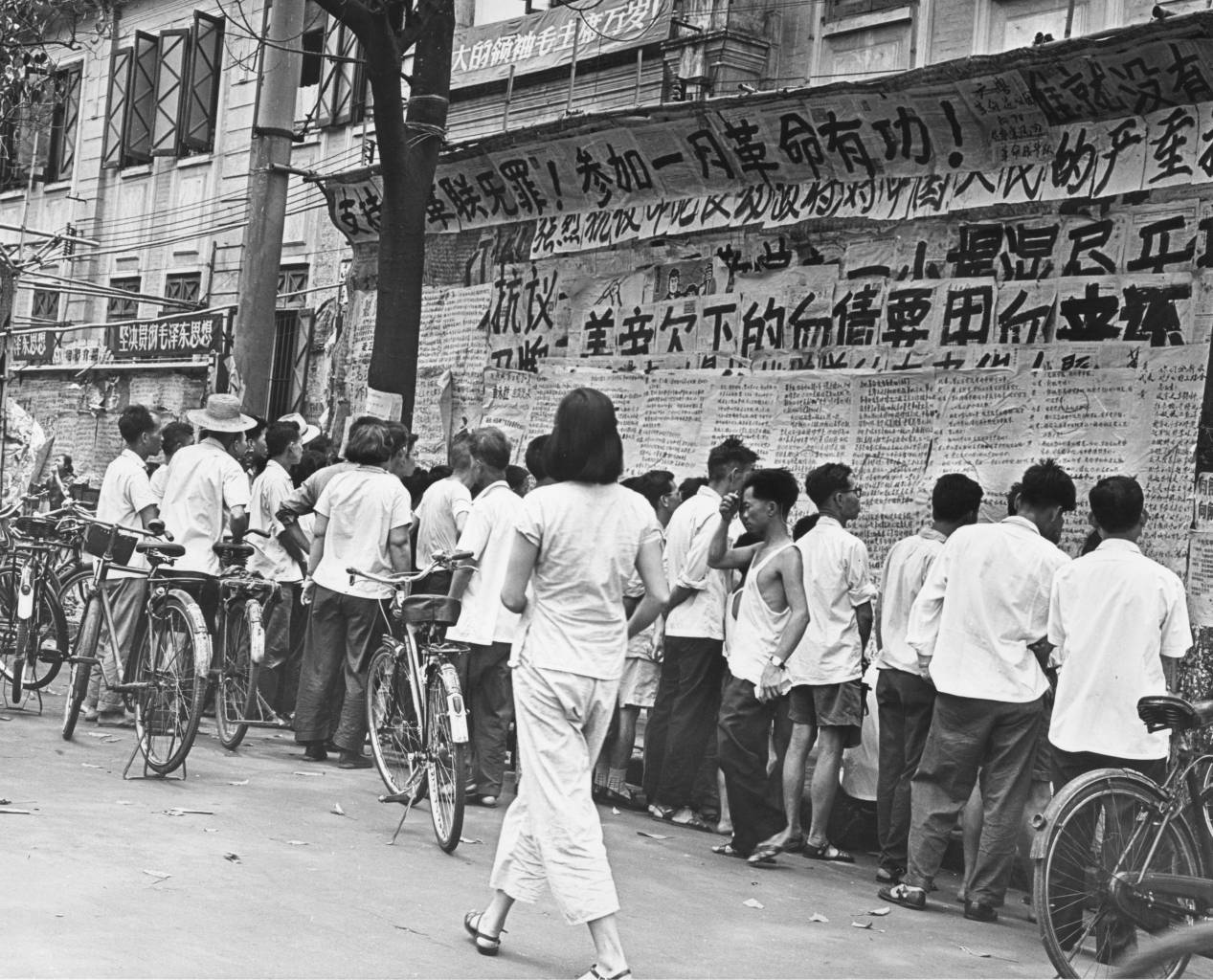 People reading ‘dazebao’ news which has been pasted on to a street wall in China. A banner spanning the top reads, ‘Long Live Chairman Mao’. (Photo by Richard Harrington/Getty Images) 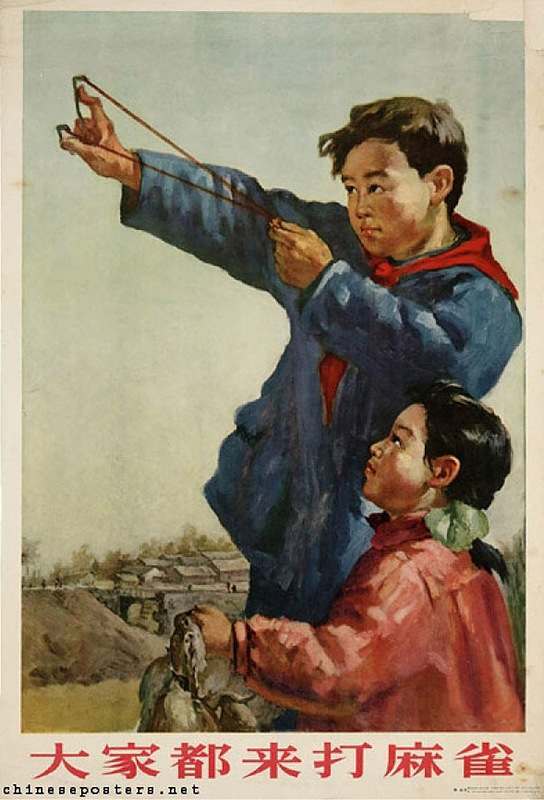 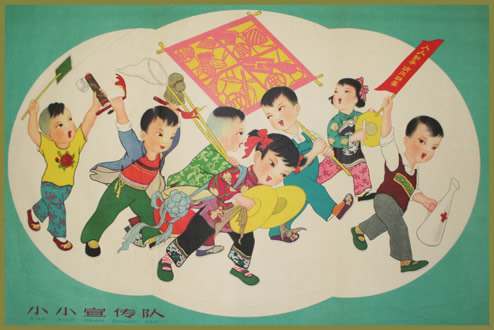 There was a game for all the family. 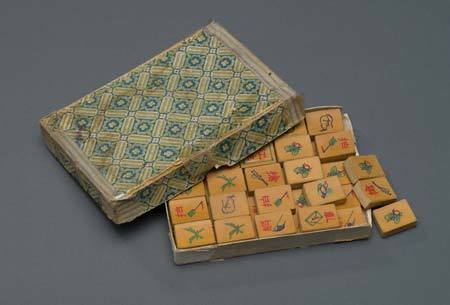 Four pests game, ca. 1960
Courtesy National Library of Medicine
One of the largest campaigns targeted the “four pests”—rats, flies, mosquitoes and grain-eating sparrows. With almost three-quarters of the population unable to read or write, to be effective these health education campaigns needed to provide critical information in an easily understandable format.

So how do you wipe out sparrows? The Chinese made a lot of noise. They shook trees. They stood outside, and bashed on pots and pans, screamed and shouted. They would keep the sparrows at bay and airborne. Fearful of landing, the birds would be unable eat, grow exhausted and die. The Chinese would also hunt them down, smashing nests, crushing eggs, stomping on chicks and shooting them with slingshots and guns.

Hundreds of millions of sparrows died. According to DM Lampton in Public health and politics in China’s past two decades. Health Serv Rep. (1972) “1 billion sparrows, 1.5 billion rats, 100 million kilograms of flies and 11 million kilograms of mosquitos” were wiped out.

The whole city is attacking the sparrows

On the early morning of December 13, the citywide battle to destroy the sparrows began. In large and small streets, red flags were waving. On the buildings and in the courtyards, open spaces, roads and rural farm fields, there were numerous scarecrows, sentries, elementary and middle school students, government office employees, factory workers, farmers and People’s Liberation Army shouting their war cries. In the Xincheng district, they produced more than 80,000 scarecrows and more than 100,000 colorful flags overnight. The residents of Xietu road, Xuhui district and Yangpu road Yulin district also produced a large number of motion scarecrows.

In the city and the outskirts, almost half of the labor force was mobilized into the anti-sparrow army. Usually, the young people were responsible for trapping, poisoning and attacking the sparrows while the old people and the children kept sentry watch. The factories in the city committed themselves into the war effort even as they guaranteed that they would maintain production levels. In the parks, cemeteries and hot houses where there are fewer people around, 150 free-fire zones were set up for shooting the sparrows. The Nanyang Girls Middle School rifle team received training in the techniques for shooting birds. Thus the citizens fought a total war against the sparrows. By 8pm tonight, it is estimated that a total of 194,432 sparrows have been killed.

With the sparrows dead, insect life boomed. The locust had never had it do good. Crop eating bugs that would have augmented a sparrow’s lunch ravaged the grain harvest. Crop yields were lower than they had been when sparrows held sway. 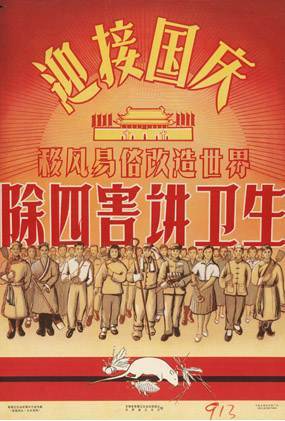 Mao went back to his hit list. Sparrows, he decreed, were now alright. Bed bugs were the real problem.

And those thriving locusts were no good. To control them, Mao went shopping in the Soviet Union for – yep – sparrows, begging the comrades for 200,000 replacement birds.

It was a disaster. The voracious and rife insects’ feeding frenzy caused widespread deforestation. The misuse of poisons and pesticides all contributed to the Great Chinese Famine (1958-1961) in which an estimated 30 million people died of starvation.

And the birds waited.

Sparrows perch on electrical wires near a paddyfield at Jiaodai Township on September 15, 2005 in Lantian County of Shaanxi Province, China. The ripe paddies have attracted a lot of sparrows during the ongoing harvest season, according to local media. 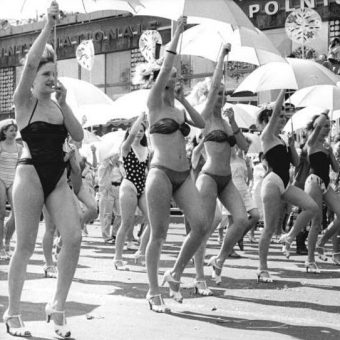 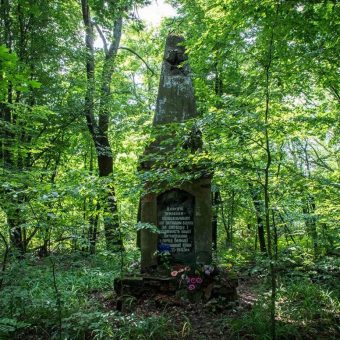