Conventional wisdom about the original Fox series, however, tells us that the series’ last two seasons (eight and nine), were somehow a disappointment, or not up to snuff considering the series’ brilliant early years.

The eighth and ninth years, in case you have forgotten, are the span in which Agent John Doggett (Robert Patrick) and Agent Monica Reyes (Annabeth Gish) stepped in to fill the void left by David Duchovny’s absence from the long-lived series.

As is often the case, however, conventional wisdom may not tell precisely the whole story.  A number of legitimately great “x-files” ideas were explored in the last two seasons of this Carter’s beloved series, and today I want to bring your attention to the five most underrated adventures of that period.

This is one of the most atmospheric and legitimately disturbing episodes of the entire The X-Files run.  Written by Frank Spotnitz (The Man in the High Castle) and directed by Tony Wharmby, “Via Negativa” finds Doggett — still new on the job, and without the assistance of Scully — forced to contend with a terrifying cult-leader, Anthony Tipet (Keith Szarabajka) whose occult powers may be frighteningly real.

In particular, Tipet believes in the Negative Way, hence the episode title. He believes he can comprehend God by defining what God is not.  And Go – quite unlike Tipet — is not Evil.  The sinister Tipet grows a third eye and uses hallucinogenic drugs to test the very boundary of reality, understand the Divine, and bring others into his nightmare world.

Doggett delves deep into the cult leader’s strange, dark beliefs until the agent himself takes an unwitting walk on the Via Negativa during a horrifying, climactic dream sequence shot in an eerie blue light. In this tense, hypnotic sequence, Doggett is driven to commit evil against Scully…with an axe.  He ultimately resists the violence, but confesses — chillingly — to Assistant Director Skiinner (Mitch Pileggi) that he no longer can be sure if he is dreaming or awake.

“Via Negativa” works so brilliantly, beyond the dark, upsetting dream sequence, because involves the character of Doggett and his development. His name could mean “dogged.” He’s a serious guy, a straight-shooter and not given to flights of fancy. Doggett isn’t “a believer” in any sense of that word, and so for him to fall prey to the dark hallucinations and evil world of Tipet is incredibly frightening.

Similarly, Mulder and Scully always had to each other to rely on when gazing into the abyss. In “Via Negativa,” Doggett has no one; no back-up.  He faces the abyss alone. Because of those qualities, this episode lingers in the imagination, and proves genuinely upsetting. 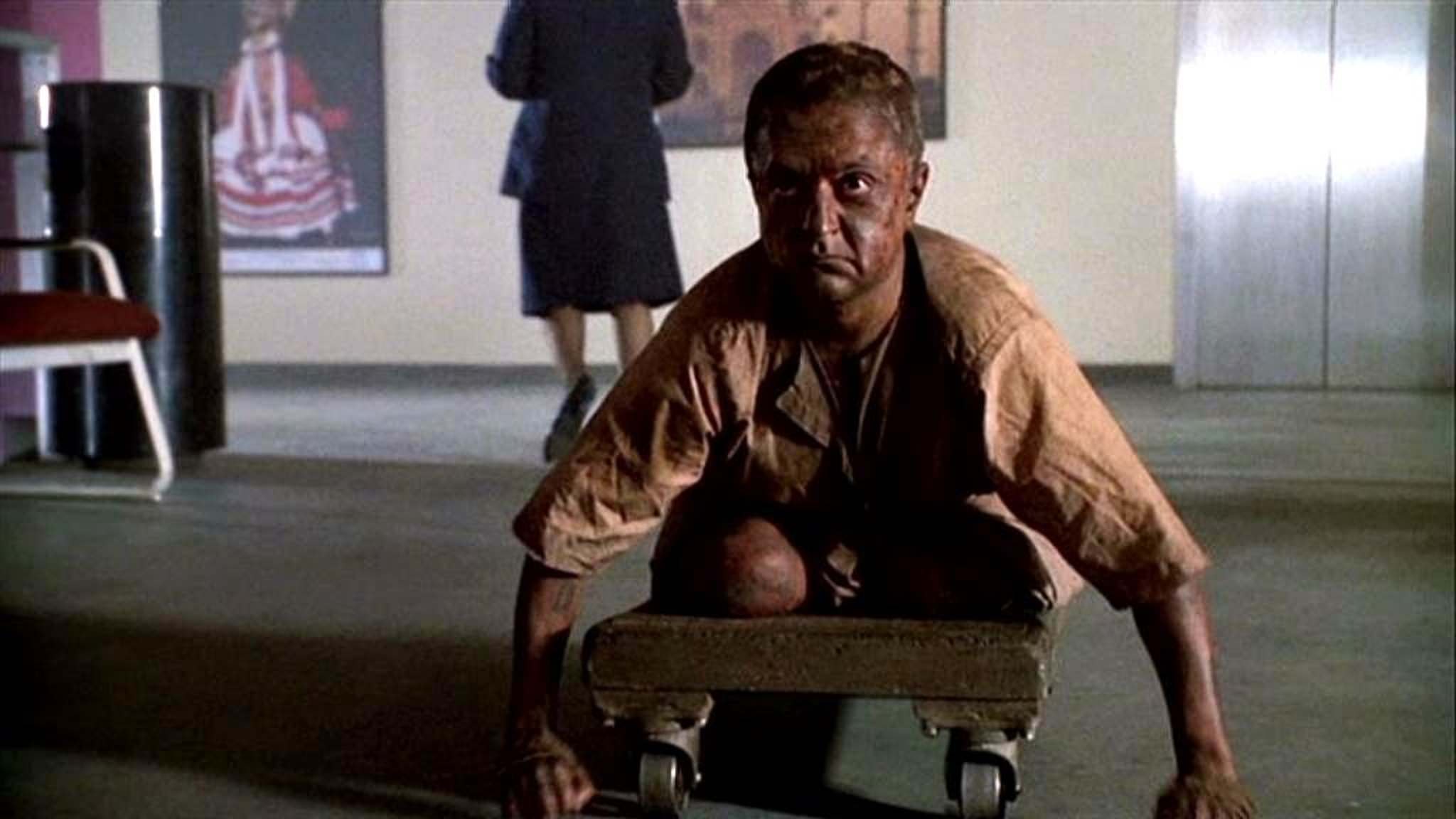 Now here is a late run X-Files episode (from writer John Shiban and director Tony Wharmby) that gives “The Host” or “Home” a run for its money in terms of powerful, disgusting imagery and violence. “Badlaa” involves a vengeful Siddhi mystic (Deep Roy) who travels to America inside the rectum of a four-hundred pound businessman.

Yes, you read that right. This fella crawls up into the rectum of another human being, and hides there.

When the mystic evacuates the rectum, causing his transport to bleed out, the audience is spared no nauseating detail of the event. Similarly, another sequence finds the mystic hidden inside a corpse, and as Scully begins her autopsy of the victim, we see the villain’s hands wriggle their way out of a chest incision.

Commendably, the terror isn’t simply visual or of the body horror variety. The mystic — an amputee — drags himself from location to location on a scooter with squeaky wheel. That squeaking sound becomes the harbinger, very shortly, for scenes of horror. You hear that sound, and you know you should be afraid.

All great X-Files episodes are not only scary, however, they add something crucial to our understanding of the characters.  “Badlaa” is a Scully-centric episode about sight. At this point in the continuity, she is still looking for the absent Mulder, teamed with Doggett and investigating x-file cases.  In “Badlaa,” she realizes she must channel her inner Mulder and see what he might have seen, to comprehend the incomprehensible.  So while the mystic can cloud the vision of his victims, making them see what he wants them to see, Scully must change her own sight, and view the threat as Mulder would see it. 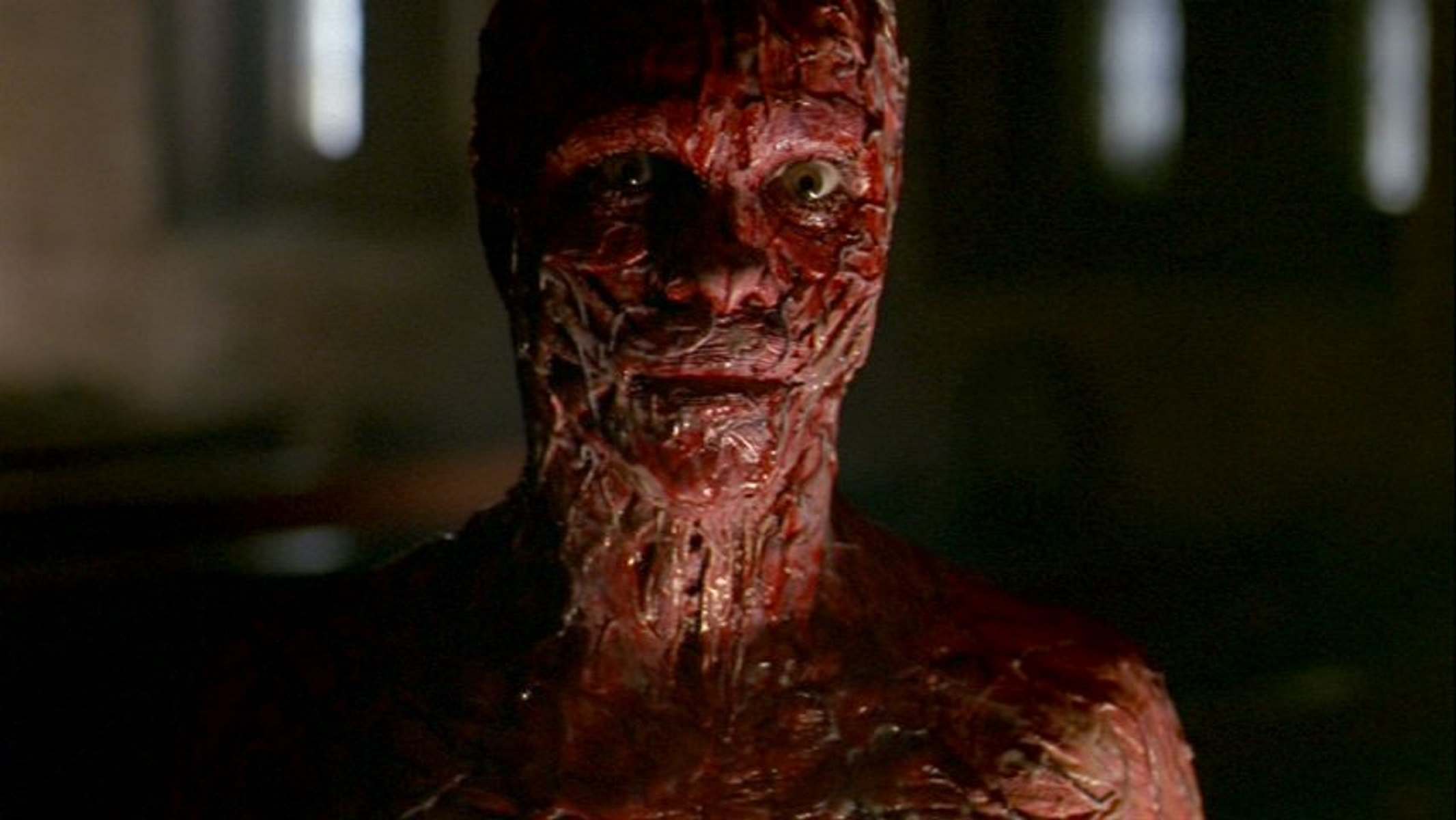 Written by David Amann and directed by the great Kim Manners, “Hellbound” is a defining episode for the character of Monica Reyes, played by Gish. In this tale, Reyes grows increasingly obsessed with a murder case in which victims are found skinned alive.

As Monica digs deeply into the case, she learns of identical murders in 1868, 1909, and 1960, and develops a theory involving reincarnation, and a vicious loop of life and death in which the same, tormented souls die in this fashion.

But here’s the kicker: Monica realizes that she is part of the loop, too, and the episode thus provides a key insight into her character.

In 1868, 1909 and 1960, Monica’s soul — in different bodies — failed to crack the case.  She couldn’t solve it. The implication is that she will continue to be trapped in this vicious circle until the perpetrator is brought to justice.  Monica’s “psychic memory” of a previous life is thus part of her character. As viewers, we realize she is driven to cases such as those found on the X-File to exorcise her particular demon, her fear of failure brought on by the events of previous lives.

“You always fail,” she is told by the episode’s monster, “it’s your lot.” But Reyes rails against this dark destiny, revealing the same courage — not to mention stubborn determination — of a Fox Mulder or Dana Scully, in the process.  Monica is a strong character, and in this episode, she truly earns her place in that basement office. 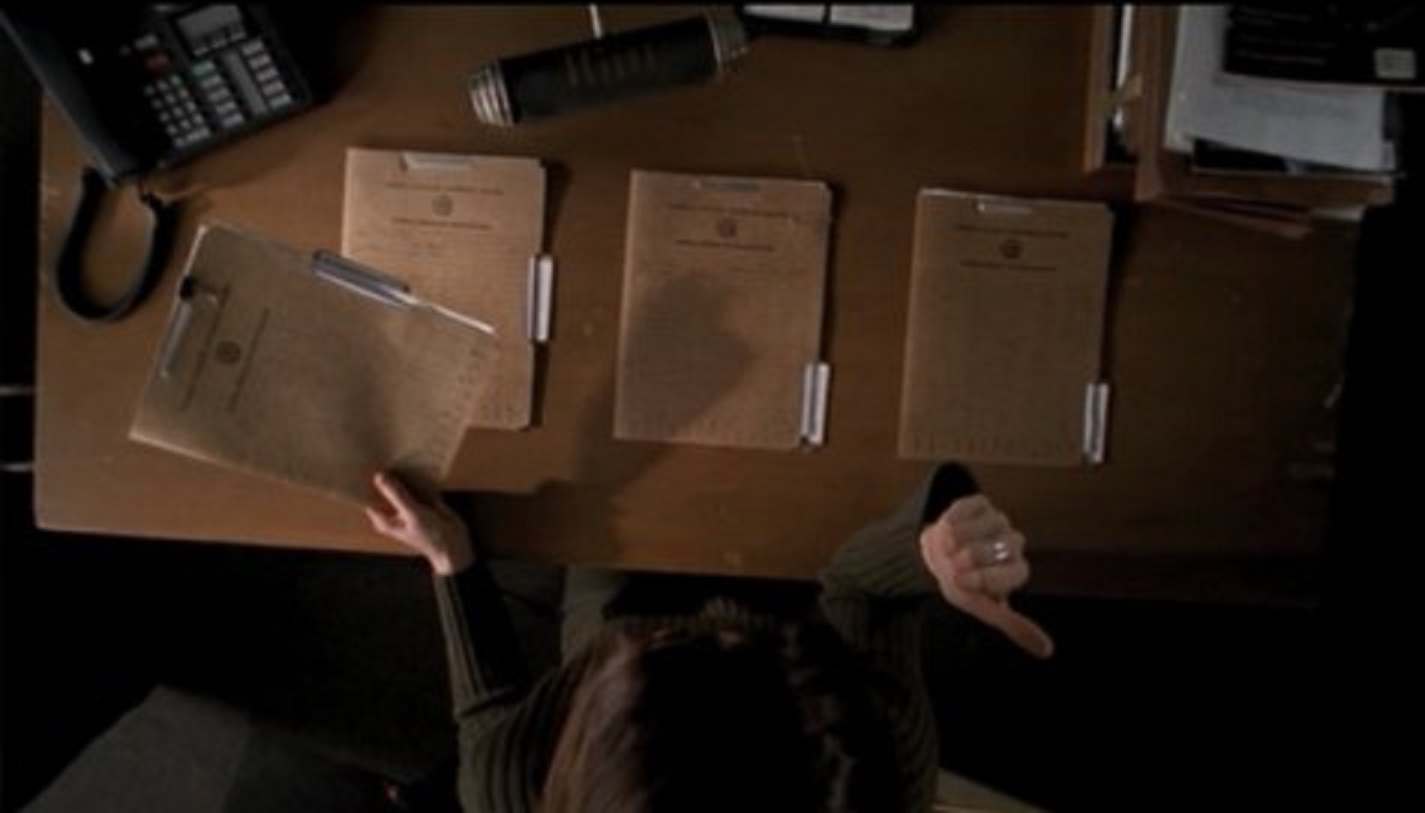 In this exploration of magical realism and its tenets, written and directed by Chris Carter, Agent Reyes utilizes Numerology to solve a series of seemingly random murders. Aid for Reyes arrives in the unexpected form of God himself…played by Burt Reynolds.

“Improbable” isn’t a monster-of-the-week show, precisely. Nor is it a Mytharc episode. So perhaps it is completely understandable why the episode baffles some people.  But Chris Carter has nonetheless created a masterpiece demonstrating just how elastic the format for The X-Files can be.

Since the episode involves Numerology (basically pattern recognition), Carter stages a number of visuals throughout “Improbable” that lead us to understand Reyes’ case.  Apparently random objects appear in lines or rows, suggesting that their placement has a value beyond their function.

Similarly, Carter features several scenes with an F.B.I. higher-up, named Fordyce (John Kapelos).  His name is, literally, “for dice,” which means he is the opposite of Reynolds’ character, a being who does not play dice with existence.  So if Burt Reynolds is God in the episode, Carter’s composition and narrative imply that Fordyce is actually the Devil, continuing to deny God’s presence (and love of patterns).

Like many episodes of The X-Files in its ninth and last — until 2016 — season, “Improbable” develops the characters, and features a kind of valedictory feel. Consider Scully’s role in this story. She starts out as a skeptic and aloof but learns from Reyes that in terms of Numerology, a number of importance for her is, “9.” That number, viewers are informed, is the number of completion.

In other words, Scully — after nine seasons — has completed her journey of self, in some significant ways.

A fascinating and multi-layered episode of The X-Files that left horror and science fiction behind, “Improbable” is a joyous, challenging episode that reveals, too, that God loves music. And that’s right on point as well. What is music, after all, but another form of mathematics, or numbers? 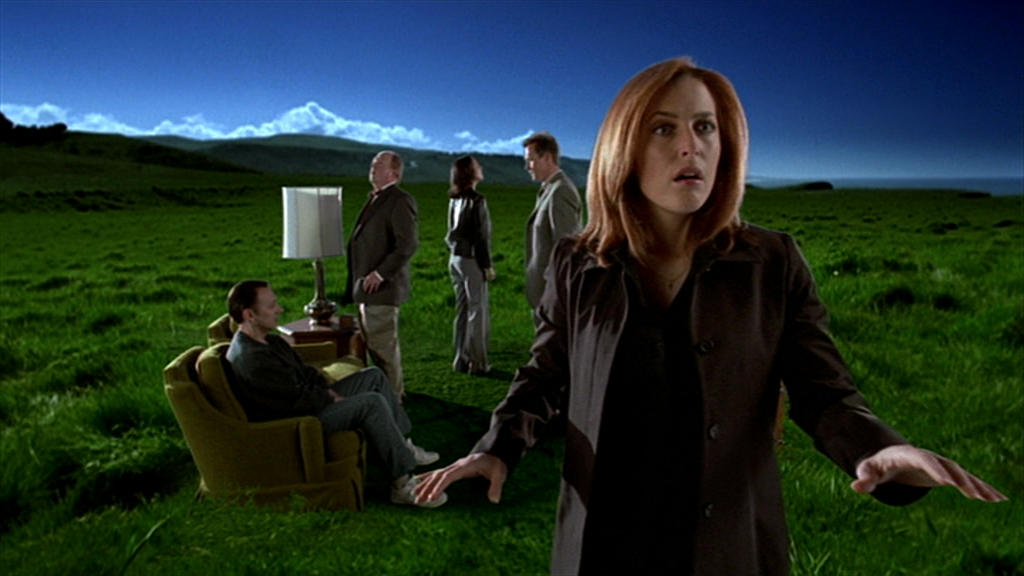 I’ll be the first person to admit that this episode written and directed by Vince Gilligan (Breaking Bad) features what, on first blush, looks like a dodgy premise.

Scully, Doggett and Reyes investigate a house that appears to be an exact duplicate of the Brady family home from the sitcom The Brady Bunch (1969-1974).

But as events unfold, the episode goes from fearsome and ironic imagery that blends The Brady Bunch with The Shining (1980), to a soulful, even emotional reckoning about the owner of the house: Oliver Martin (Michael Emerson). He is a lonely soul who, like his name sake played by Robbie Rist on the famous TV series, considers himself a jinx.

As the agents dig deeper into this mystery (the final standalone of the series), they come to understand why this lonely soul is obsessed with The Brady Bunch — why it means so much to him — and the episode becomes a kind of meta or post-modern reflection on the importance of TV programs to fans.

What makes a person obsessed with a TV series?  What makes that person want to change his or her life to reflect…entertainment? How is it that we can consider TV characters part of our family?

So on its second-to-last episode, “Sunshine Days” is really all about the bonds that viewers form with successful TV programs, and hence a reflection not merely on The Brady Bunch, but on The X-Files and its nine year journey into pop culture immortality. 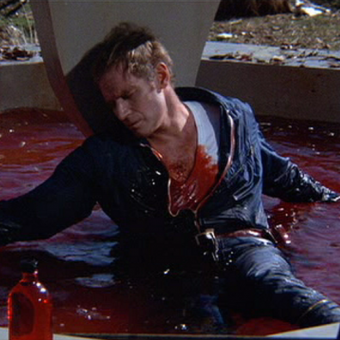 Sci-Fi on the Cross: The Crucifixion Pose in SF Film and TV 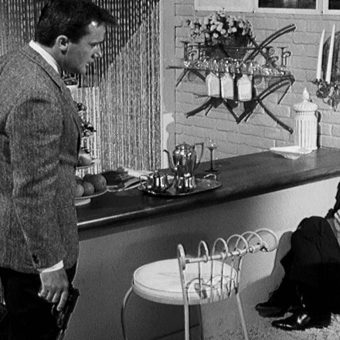 Culture of Fear: Six Times that Fear was a Deadly Weapon on Sci-Fi TV 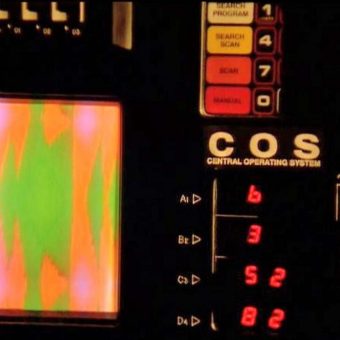 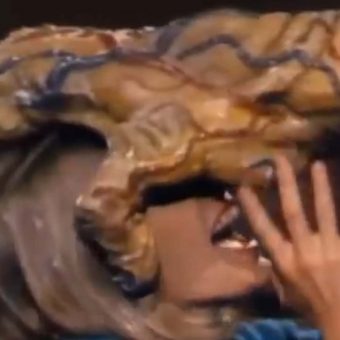 Have a Merry Scary Christmas: 5 Cult-TV Episodes to Terrorize Your Holiday