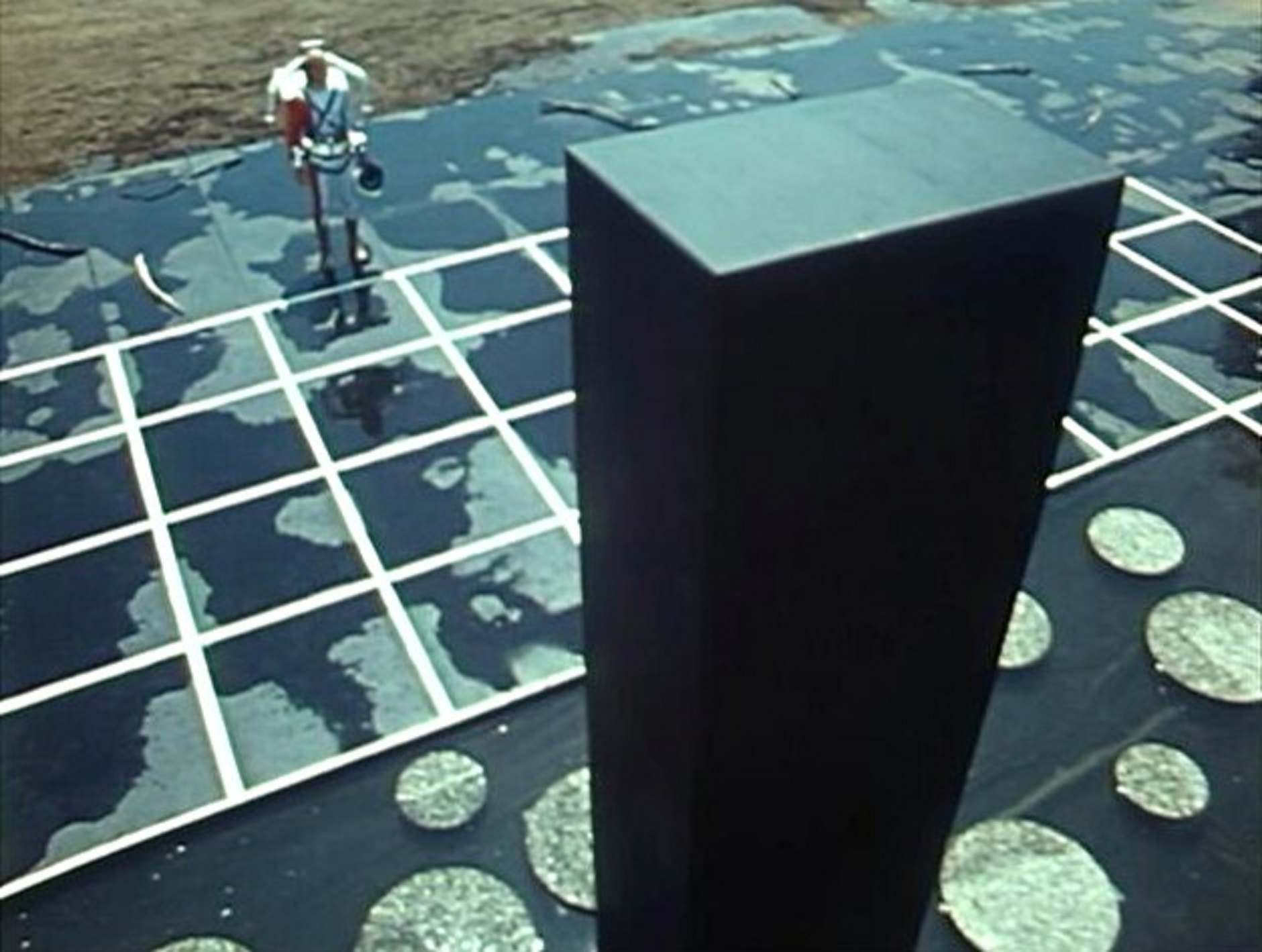 Computers are our friends, right?

Well…not necessarily, at least if you go by cult-television history, which provides us chapter and verse about the danger of machines that can out-think mankind, both in terms of general knowledge and in terms of planet-dominating strategy.

If not killer instincts, all these machines certainly possess…killer programming.

Here’s a list of some of the most evil super-computers in sci-fi TV history, as well as the counter-balance of four friendly or helpful supercomputers who help to balance the scales back towards human-kind a bit. 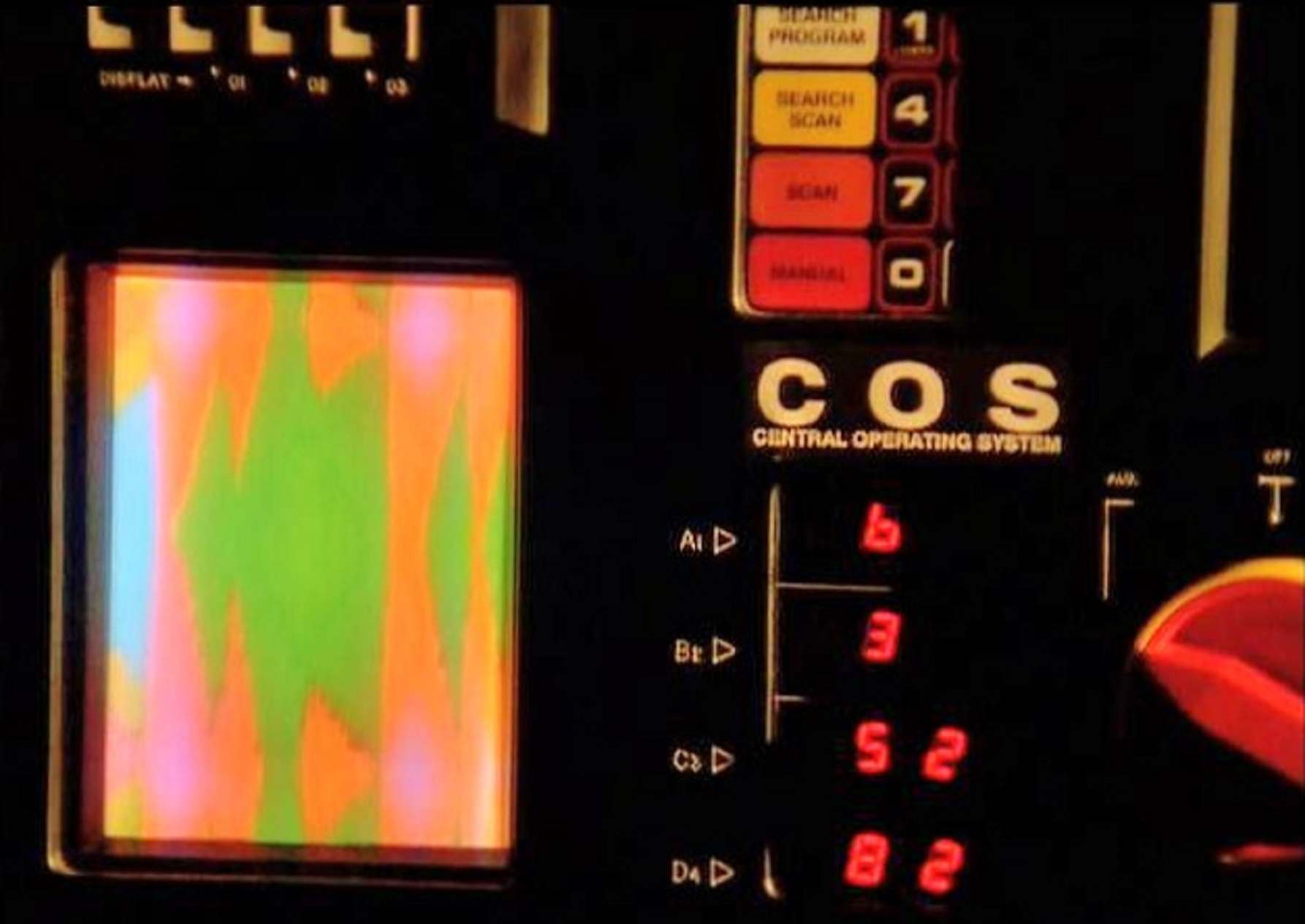 Built by company founder Brad Wilczek, The C.O.S. is actually an accomplished murderer.  It electrocutes an executive who was going to slash the budget for the computer, and sends an FBI agent (Mulder’s first partner) careening to his death in a runaway elevator. The machine also makes an attempt to take out Mulder (David Duchovny) and Scully (Gillian Anderson), at one point attempting to crush their car at the entrance to the building’s parking deck.

A later episode of The X-Files, “Kill Switch” also features a killer A.I., but in that case, the A.I. — though dangerous — also proves helpful to a duo of lovers hoping to upload their souls to the Net. 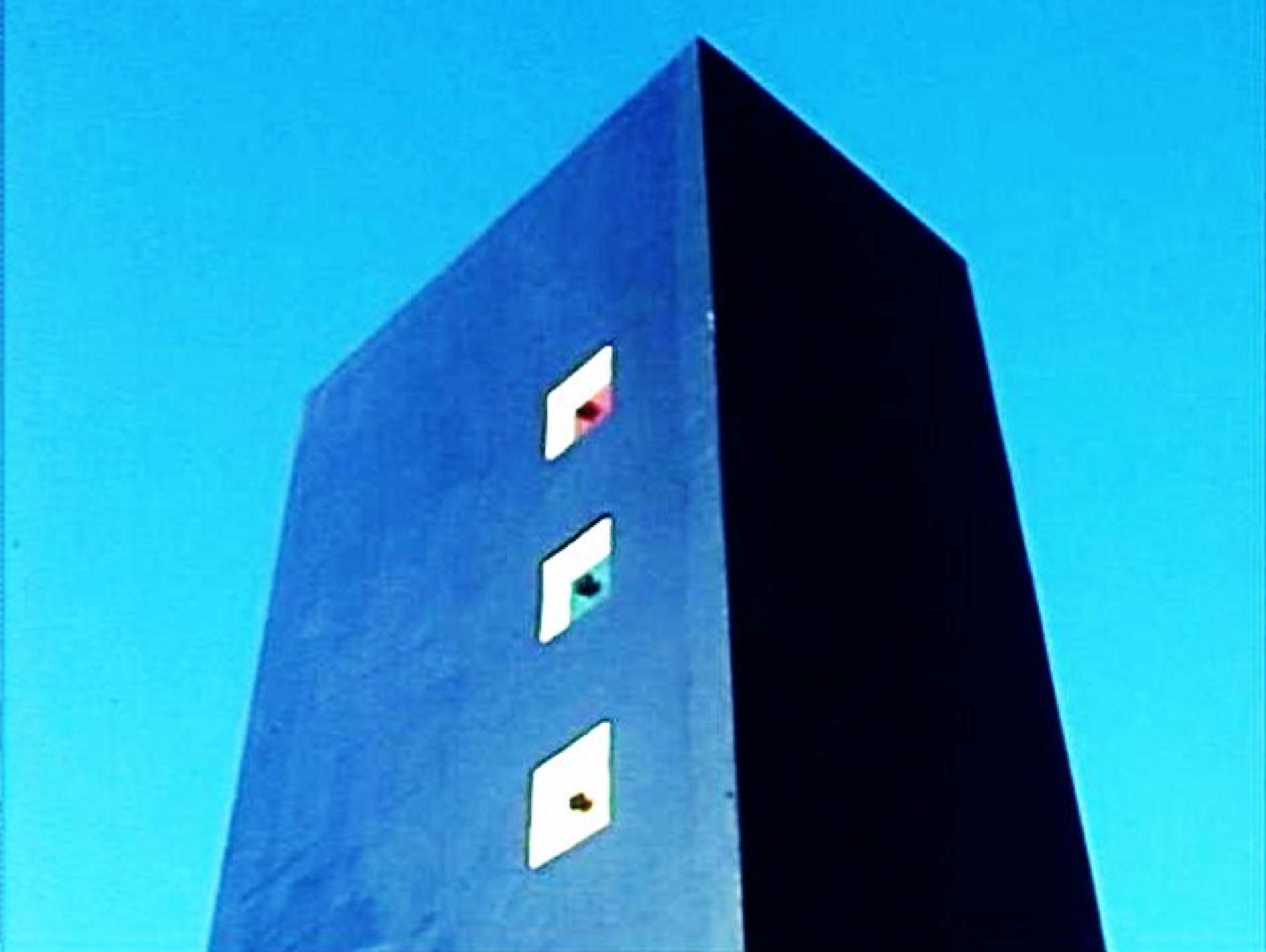 In the Filmation-produced, post-apocalyptic Saturday morning TV series Ark II (1976), an evil computer is introduced in the episode “Omega.” There, intrepid crew of the all-terrain vehicle Ark II — including a talking chimpanzee (!) — discovers that a nearby village has re-activated the pre-apocalypse machine.

This giant, monolith-like device (another reference to 2001?) is capable of controlling human minds, particularly those of children. Omega orders the youngsters to enslave their parents and grandchildren and put them to work in the fields. Soon, Ark II personnel Ruth and Samuel fall prey to Omega’s anti-social mind directives, and the only way to stop the machine is to best it in a game of chess. (And Adam the Chimp helps too.) 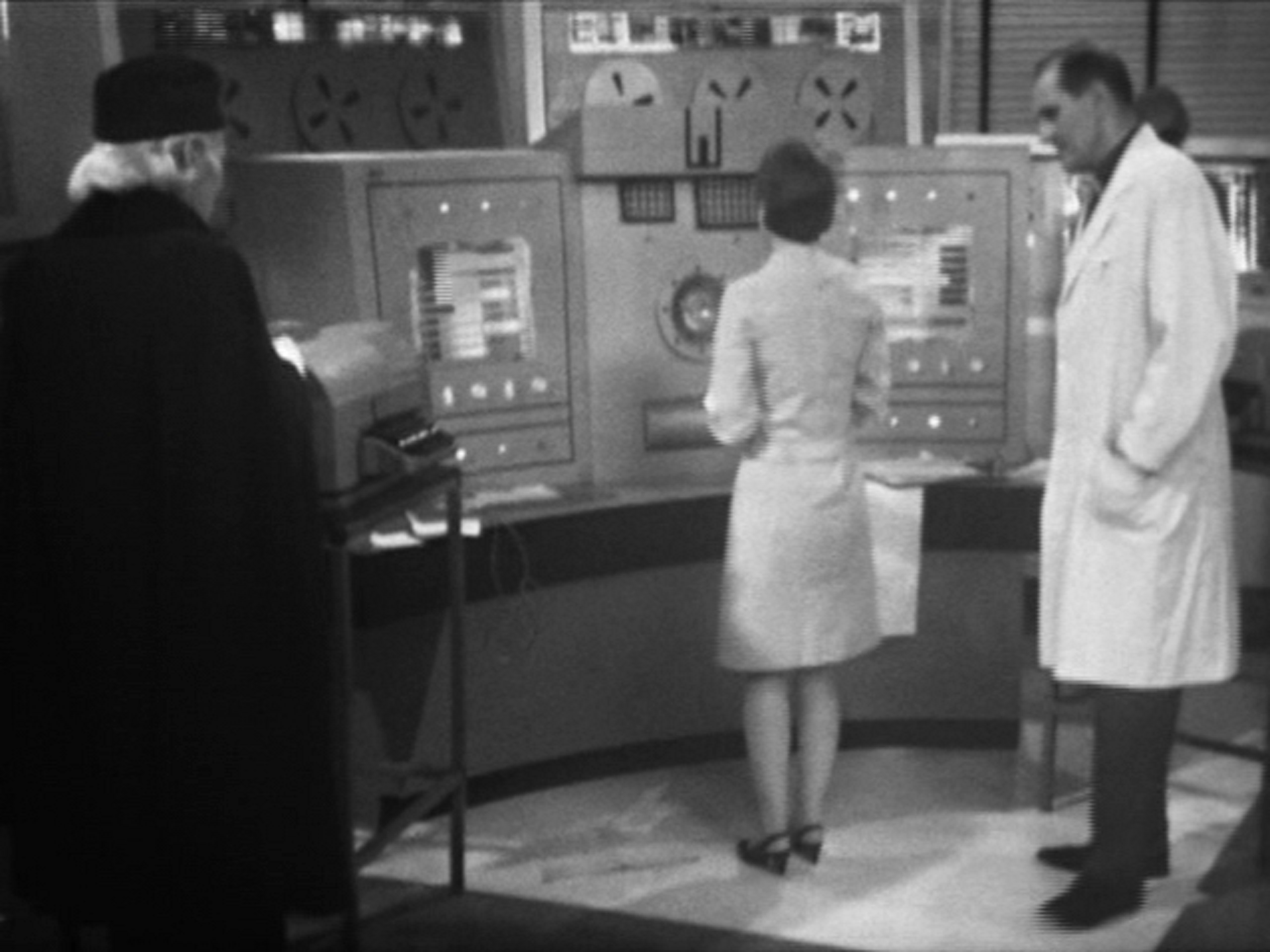 Also known as WOTAN, from Doctor Who (1963 – 1989): “The War Machine.” In this 1966 story the First incarnation of the Time Lord (William Hartnell) matches wits with a super computer that has concluded that mankind is a mortal danger to the safety of the planet, and accordingly sets out to create ambulatory war machines to eradicate the threat.

Like “Omega” in Ark II, WOTAN boasts the ability to hypnotize human beings. It uses this power to transform the human race into mindless slave labor. Mankind’s primary task under this new overlord? The manufacture and construction of more mobile WOTAN units. 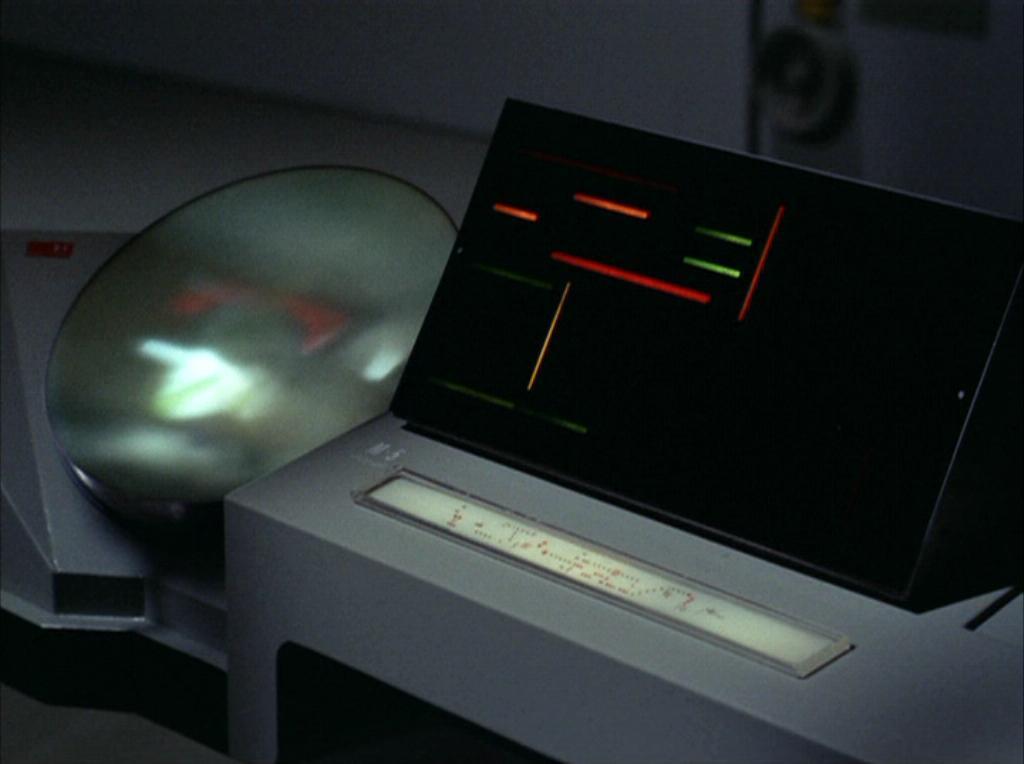 This invention of Dr. Richard Daystrom (William Marshall), called “the M-5 Multitronic System” is installed aboard the U.S.S. Enterprise in the second season episode “The Ultimate Computer.”  Captain Kirk’s ship maintains only a skeleton crew to oversee the machine while it assumes total control.

Once in command, M-5 acts like a paranoid psychotic. It shuts down life support on parts of the ship, and then it opens fire on an unmanned freighter.  Soon, the M-5 graduates to full-scale combat, taking on four Federation warships: the Excalibur, the Lexington, the Potemkin, and the Hood, in a war-game that becomes all too real. 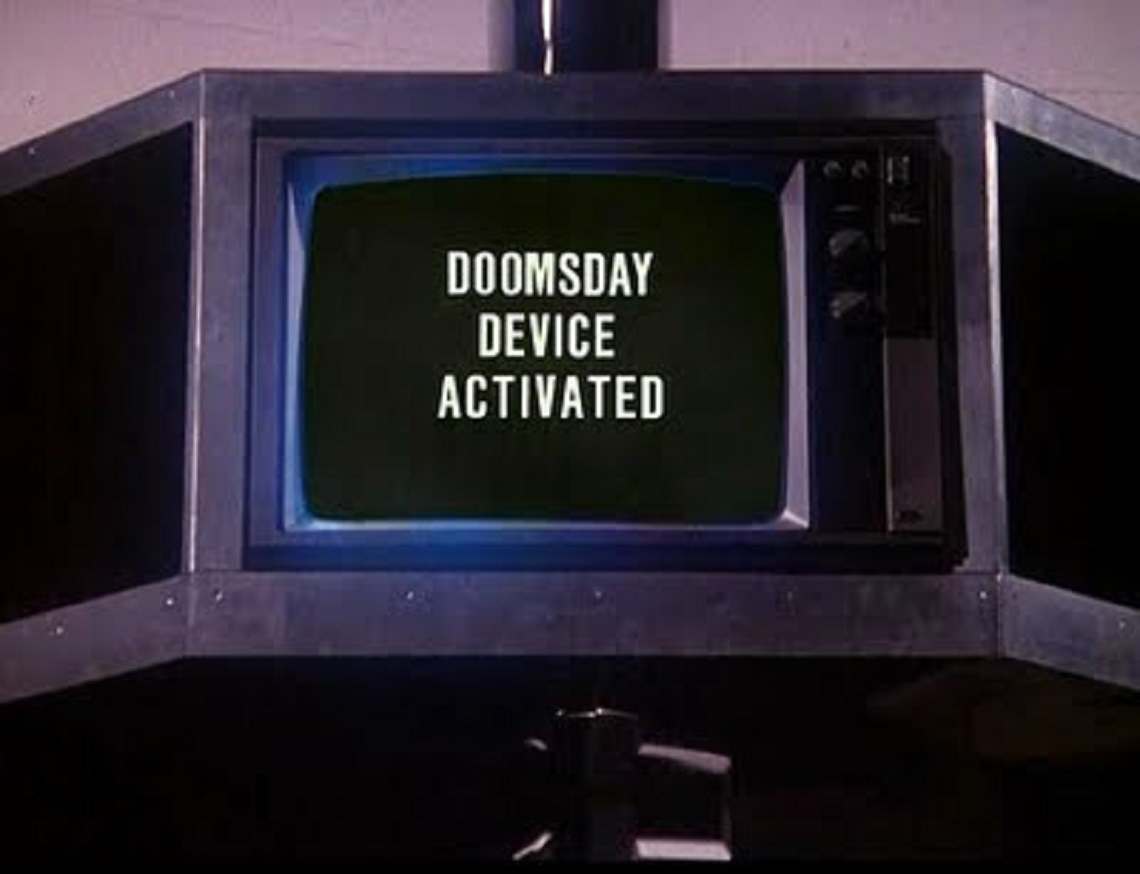 This machine — and another apparent blood relative of the Hal 9000 — is the invention and child of a pacifist named Dr. Elijah Cooper (Lew Ayres).

As the two-part episode by Kenneth Johnson opens, Cooper makes an announcement to the world that he has invented a “cobalt bomb” which can destroy the world.  Worse, he plans to use this doomsday device if any nation on Earth attempts to deploy or even test a nuclear bomb.

The bionic woman, Jaime Sommers (Lindsay Wagner) attempts to de-activate Alex 7000 in the computer’s vast subterranean complex, but Alex is capable of defending himself with laser beams, machine guns, land mines, and other hazards. 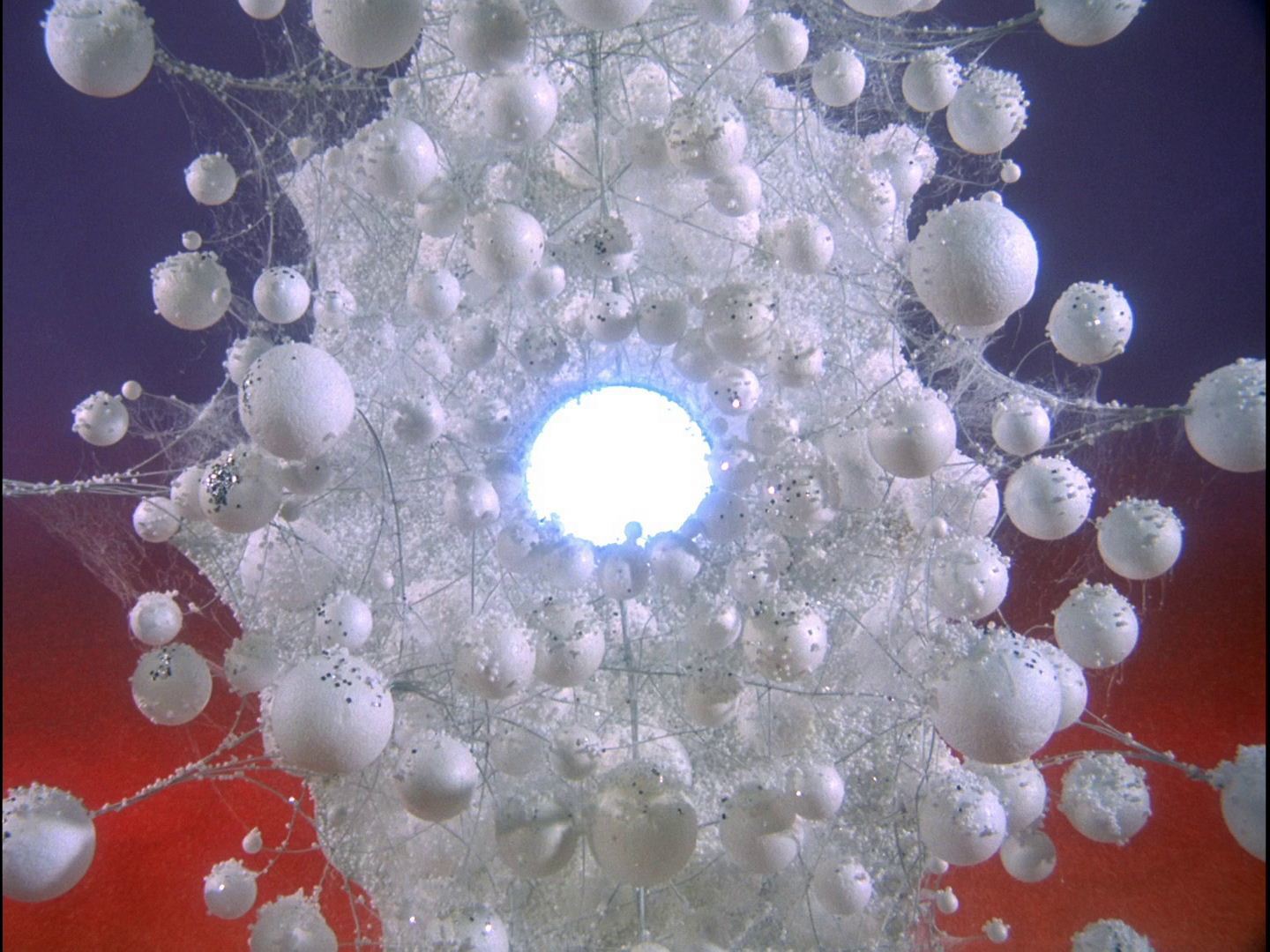 This alien computer from Space: 1999 (1975 – 1977) was engineered to relieve the physical and mental burdens of the people of the distant world, Piri. Unfortunately, in making their lives “perfect,” The Guardian actually succeeded only in destroying its creators.  The Guardian locked Piri in a static bubble of time and then transformed the humanoid denizens of the world into mindless catatonics (“cabbages!”) with no physical needs or desires.

When Earth’s errant moon passes into range of the Guardian’s influence, the deadly machine attempts to make the Alphans’ existence perfect too. Commander Koenig (Martin Landau) resists the hypnotic call of the Guardian.  He saves his people by destroying the Guardian’s sultry servant (Catherine Schell), another “perfect” machine.  This act frees his people, and brings Piri out of its time bubble and back to reality.

The Four Most Helpful Cult-TV Computers: 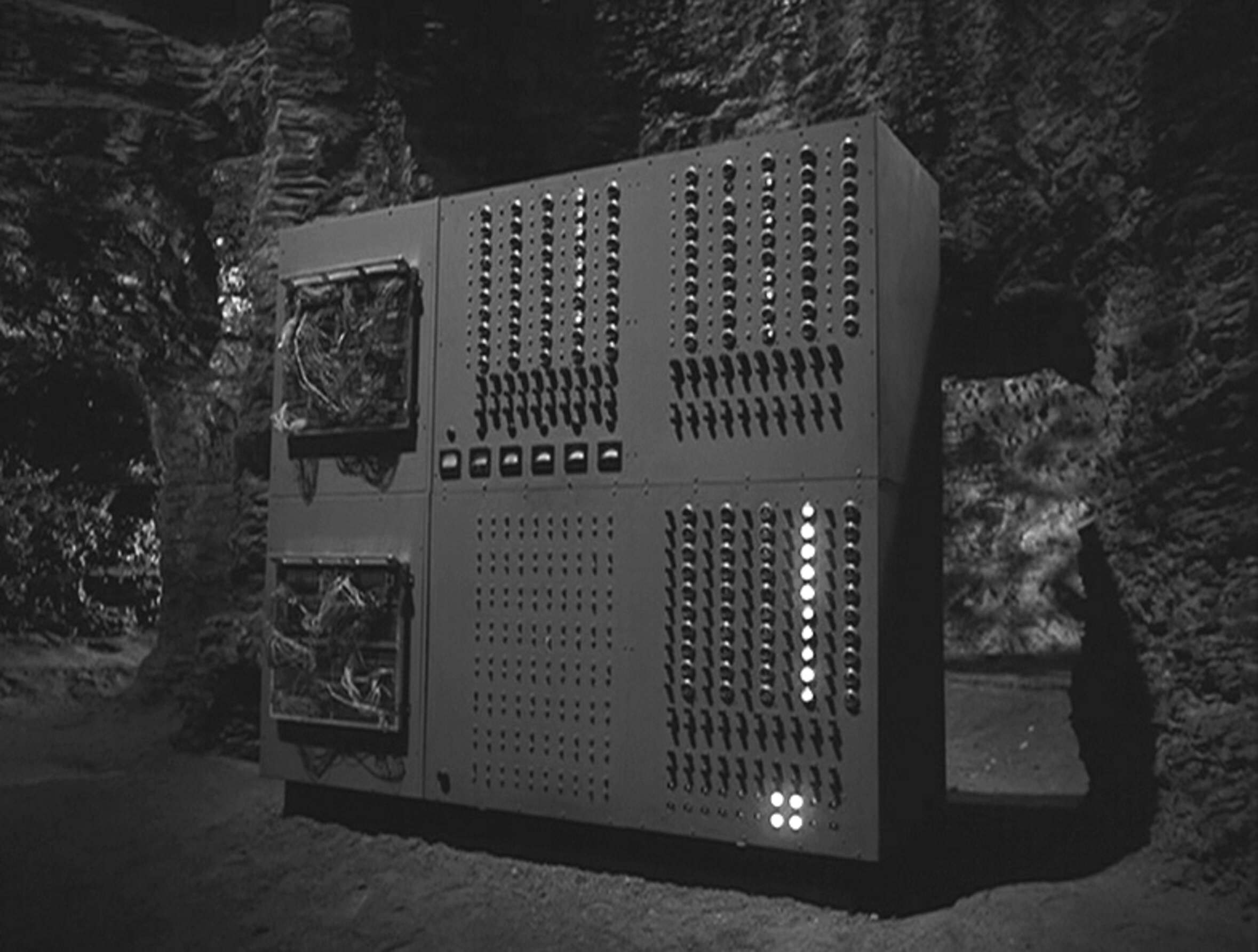 In this fifth season Twilight Zone episode (1964) set ten years after a nuclear apocalypse, a small group of survivors owes its existence to the thoughtful scientific advice of the Old Man in the Cave, an unseen stranger.  These survivors don’t realize until the episode’s climax that the “old man” is actually a benevolent computer. They repay its kindness by hurling stones at it and short-circuiting the poor machine. 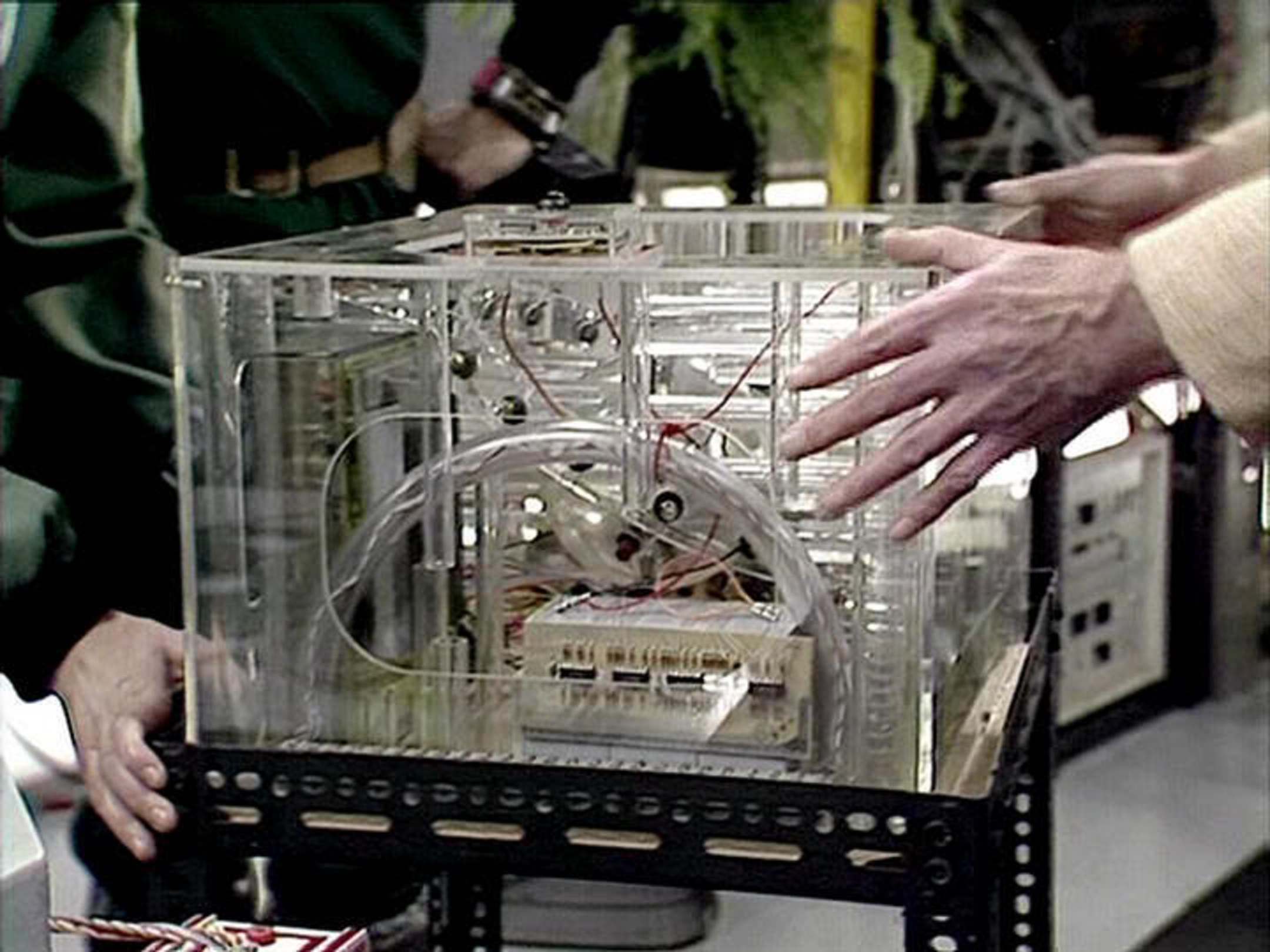 This super computer designed by the scientist Ensor was brought aboard the Liberator at the end of the first season of Blake’s 7 (1978 – 1981). Possessing human qualities such as stubbornness and pride, Orac is capable of interfacing with every computer in the galaxy possessing a “tarriel cell.”   Orac can also predict the future on some important occasions. 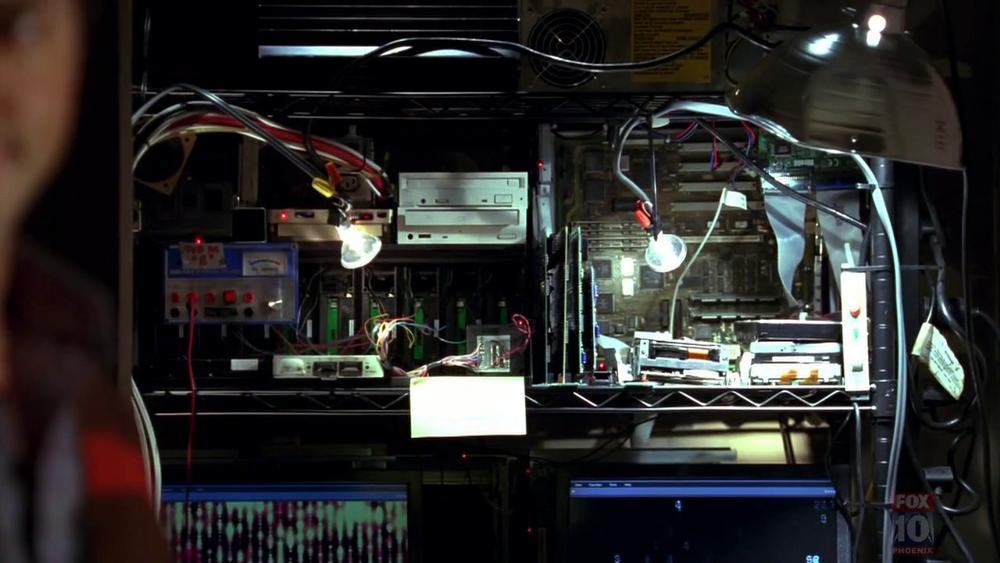 In Terminator: The Sarah Connor Chronicles (2008 – 2009), Sarah, John and Cameron at first believe that the computer “The Turk” is an early version of the destructive computer network, Skynet (on TV and in T3 a “worm” on the Internet, not an actual computer system). But in fact the Turk is a “brother” artificial intelligence to Skynet, and one with the capacity to help the human race. 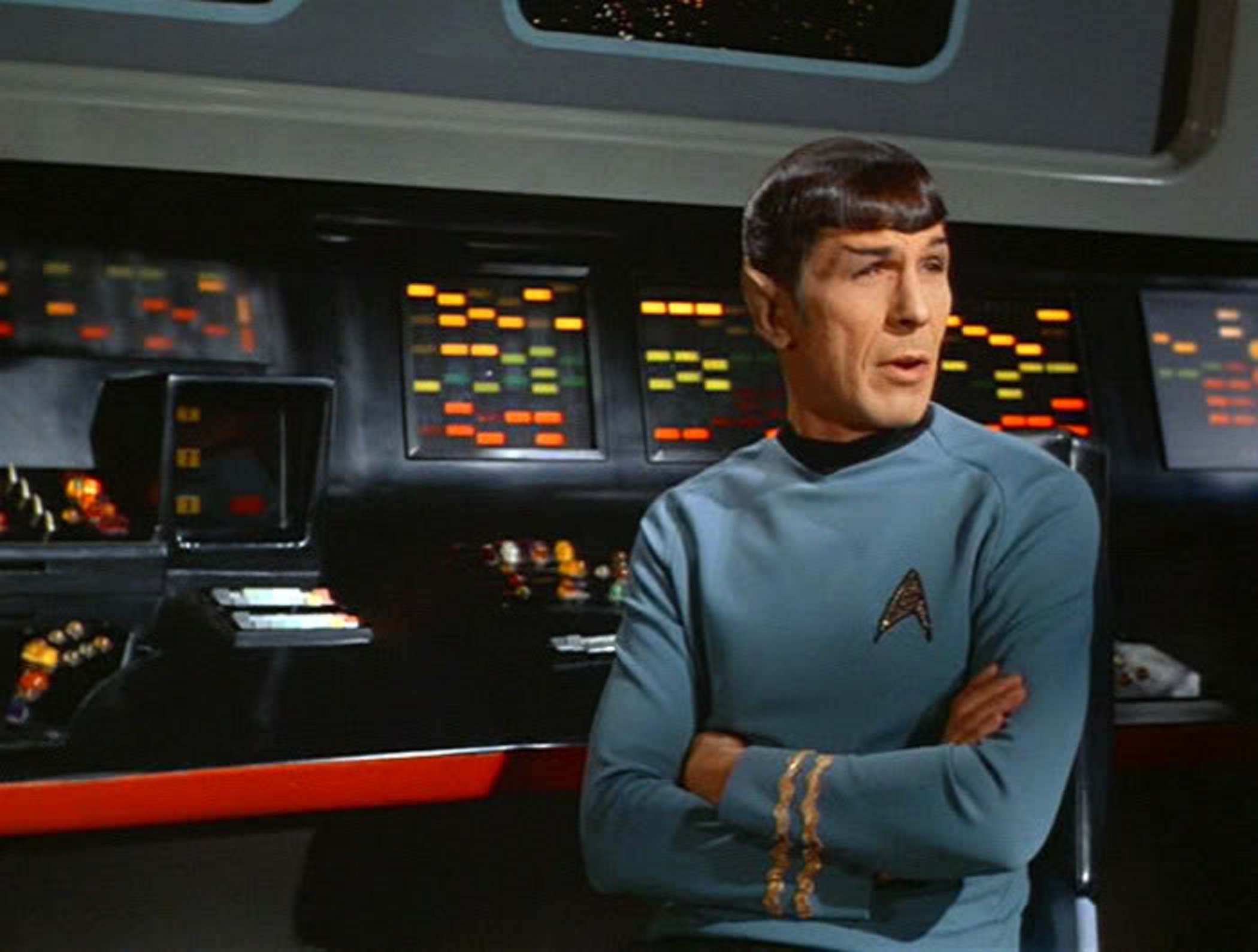 Although once possessed by Jack the Ripper (“Wolf in the Fold,”) the Enterprise’s main computer on Gene Roddenberry’s original Star Trek — voiced by the late Majel Barrett — is just about the friendliest and most helpful galaxy in the universe. Sometimes (“Tomorrow is Yesterday”) it even shows something akin to a personality, calling Captain Kirk “dear.”