In Christian belief, there are fewer symbols more powerful than that of the crucifixion. By going to his death on the cross, Christians believe, Jesus redeemed the human race. He delivered mankind from the penalties of sin.

Throughout science fiction film and television history, the crucifixion pose — the very symbol of Jesus’s suffering and sacrifice — has frequently been deployed to suggest the concept of meaningful and profound sacrifice too.

Now, Jesus figures appear throughout sci-fi and TV history, in probably dozens of important films. In John Carpenter’s Starman (1984), for instance, the alien played by Jeff Bridges descends to Earth and then — after being human for a short time — ascends to the stars (or Heaven).  The narrative is a modernized, extra-terrestrial Jesus parable.  But this article looks specifically at those incidents in which characters recreate the crucifixion pose on film.

In The Omega Man (1971), an adaptation of Richard Matheson’s 1954 novel I Am Legend, for example, the film ends with a notable (and oft-criticized) instance of the crucifixion pose. The film is set in a post-apocalyptic world in which germ-warfare has transformed people into albino monsters, part of a societal group called “The Family.”  By contrast, normal humans are dying out, dwindling in number.

In the film’s last scene, the protagonist, Neville (Charlton Heston) is speared, and pinned to a sculpture and a fountain, and his blood is seen dripping out and mixing with the water.  Neville is the only normal “immune” human left on Earth, and his blood becomes the well-spring by which the germ or disease can be eradicated. He dies, in other words, to restore the human race. In John 1:7, it is written “and the blood of Jesus Christ his Son cleanseth us from all sin.” This is literally what happens in The Omega Man, the crucifixion pose draws that connection between saviors in visual terms.

In Alien3 (1992), survivor Ellen Ripley (Sigrouney Weaver) is seen in the pose of the crucifixion at least twice, and appropriately so.  She learns that she is carrying a deadly queen alien or xenomorph inside of her body, and that if it is born, it could hatch thousands of eggs.  The human race — the universe itself — will be jeopardized by this new order.  Ripley, who very much wants to live, realizes that she must end her own life to grant humanity a second chance, free from the evil: (the sin) of the aliens.

Complicating matters for Ripley, however, is the presence of Bishop II (Lance Henriksen). He comes to Ripley, a silver-tongued Devil, and tells her all the things she wants to hear so she doesn’t save humanity. He tells her she can still have a life, a family…children. He tells her that a simple surgery will remove the alien queen from her belly, and that he will kill the queen once it is out of her.  But Ripley realizes she can’t trust him.

In the pose of the crucifix, she hurls herself to her death, ending her life and the alien threat. She dies so that humanity may live.

The Matrix Revolutions (2003) similarly positions Neo (Keanu Reeves) — “The Chosen One” — as a Christ-like figure that can redeem the world. He will give up his continued existence, and in doing so, bring life to a new, more humane Matrix.  It will be a place where the machines and the humans live side-by-side, in peaceful symbiosis. His death (after defeating Agent Smith) is the very thing that begins this cycle. He gives the gift of life to the world, but like Jesus, will not continue to live among us. 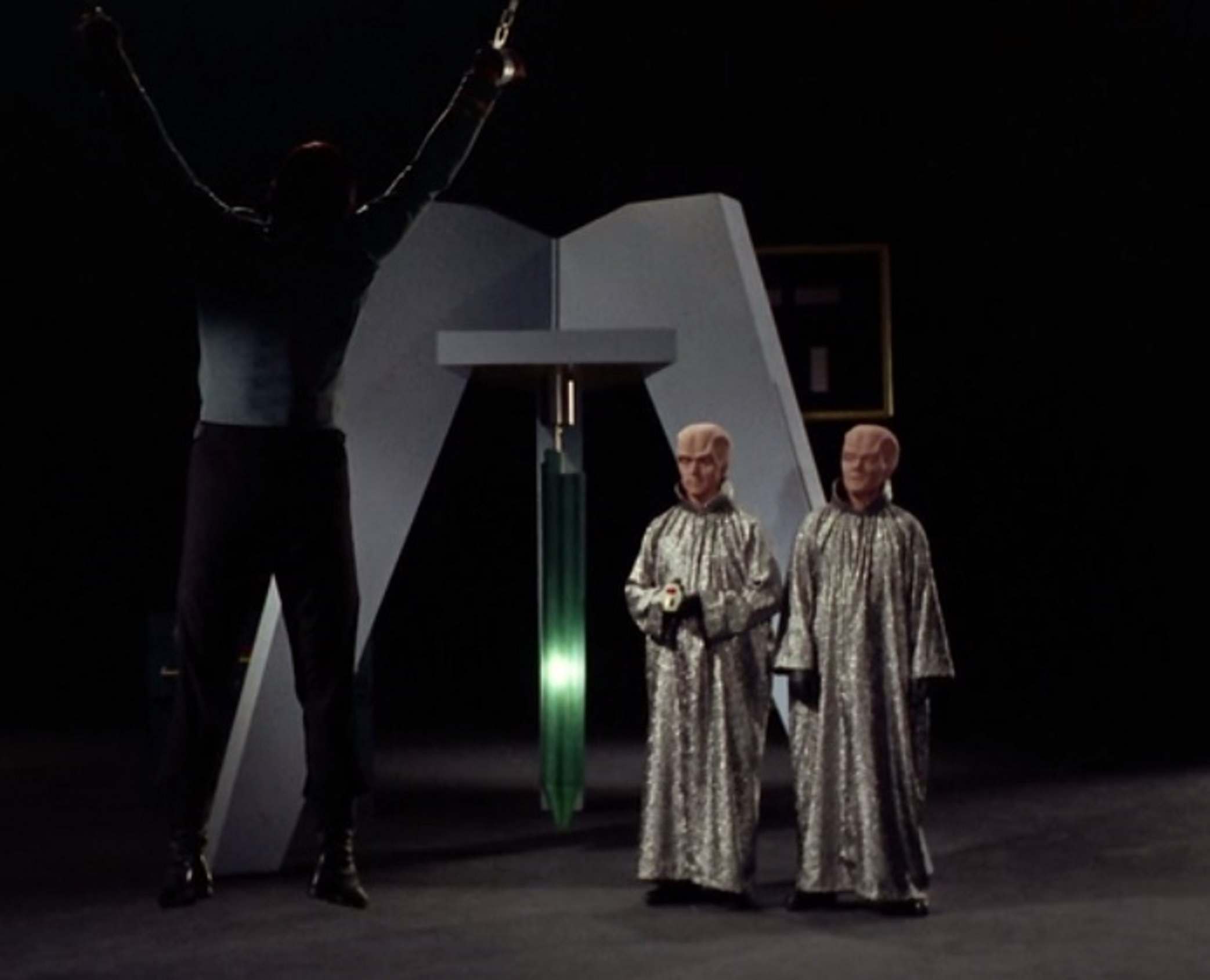 Moving to TV, a third season episode of Star Trek (1966 – 1969) called “The Empath” also featured a crucifixion of sorts.

Here, Captain Kirk (William Shatner), Mr. Spock (Leonard Nimoy) and Dr. Bones McCoy (De Forest Kelley) visit the planet Minara II, where alien scientists called Vians capture them and force them to endure painful medical tests.  The aliens do so in an attempt to create in another test subject, Gem (Kathryn Hays) the feeling of empathy.

In short, the Vians must decide if Gem’s people — doomed to die in a stellar catastrophe — are worth saving.  If Gem shows the advanced (and Jesus-like) trait of self-sacrifice for the good of others, her people will be “saved.”  Doctor McCoy, realizing that Kirk and Spock could die, willingly submits to the torturous experiments, and is strung up, like Jesus on the cross, to endure suffering.  Gem learns from his example (as Christians take to heart Christ’s example…) and develops the trait of empathy the Vians sought.  The episode explicitly quotes the Gospel of Matthew 13:45-46, and terms Gem “one pearl of great price.” 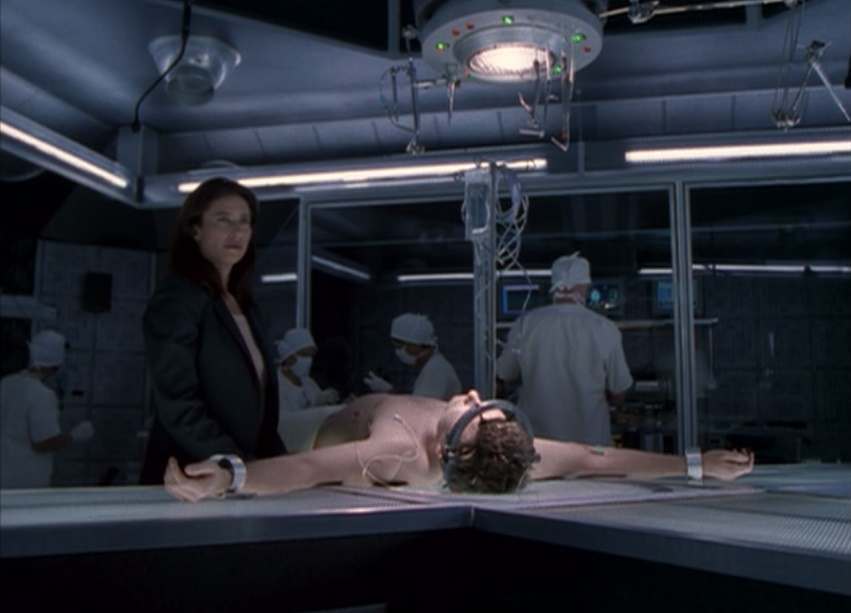 In the seventh-season The X-Files (1993 – 2002) episode “Amor Fati,” Fox Mulder (David Duchovny) undergoes a difficult experience that resembles the crucifixion. In this story, Mulder — in the process of becoming a genetic hybrid of man and alien — is captured by the Cigarette Smoking Man (William B. Davis) and forced to endure torturous medical experiments. In the lab, Mulder is strapped to a table that is shaped like a giant X or from another perspective: a Catholic cross. Atop his head rests a fastener with vise-grips. The surgical table represents a high-tech version of Christ’s cross, and the helmet is a stand-in for Jesus’s crown of thorns, described in the Gospels of Matthew, Mark and John.

The remainder of the story adapts Nikos Kazantzaki’s novel The Last Temptation (1953) to X-Files lore, as the Cigarette Smoking Man – doubling as Satan – attempts to convince Mulder not to pursue his quest, uncovering the truth.

Instead, the villain wants Mulder to live an “ordinary life” of mortal, earthly pleasures.  Mulder nearly goes the latter route, until confronted/rescued by Scully (Gillian Anderson). In doing so, we must assume he rescues the future of the human race, saving it from alien colonization and slavery.