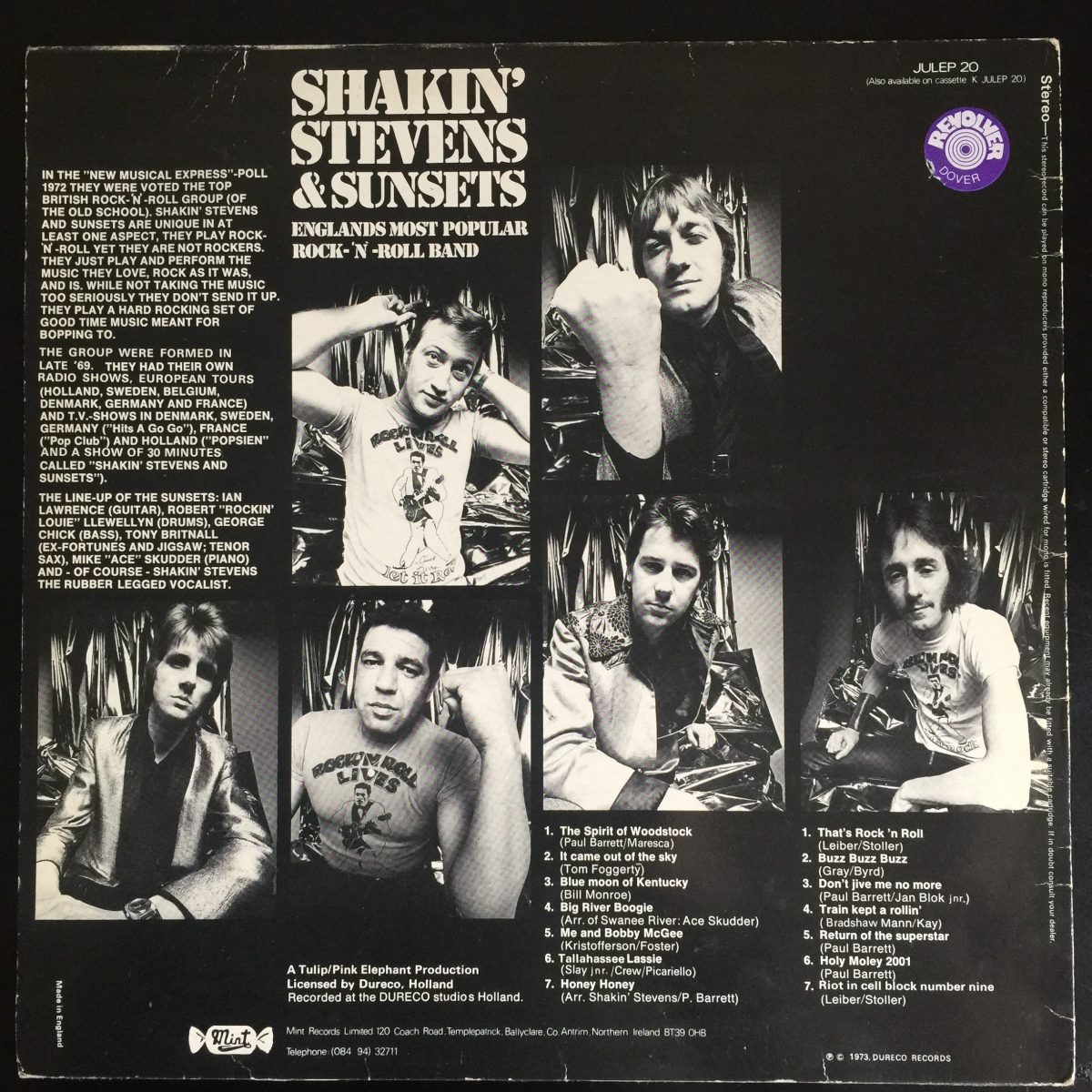 Back cover of the group’s 1973 LP released by Mint Records. No photo or design credit 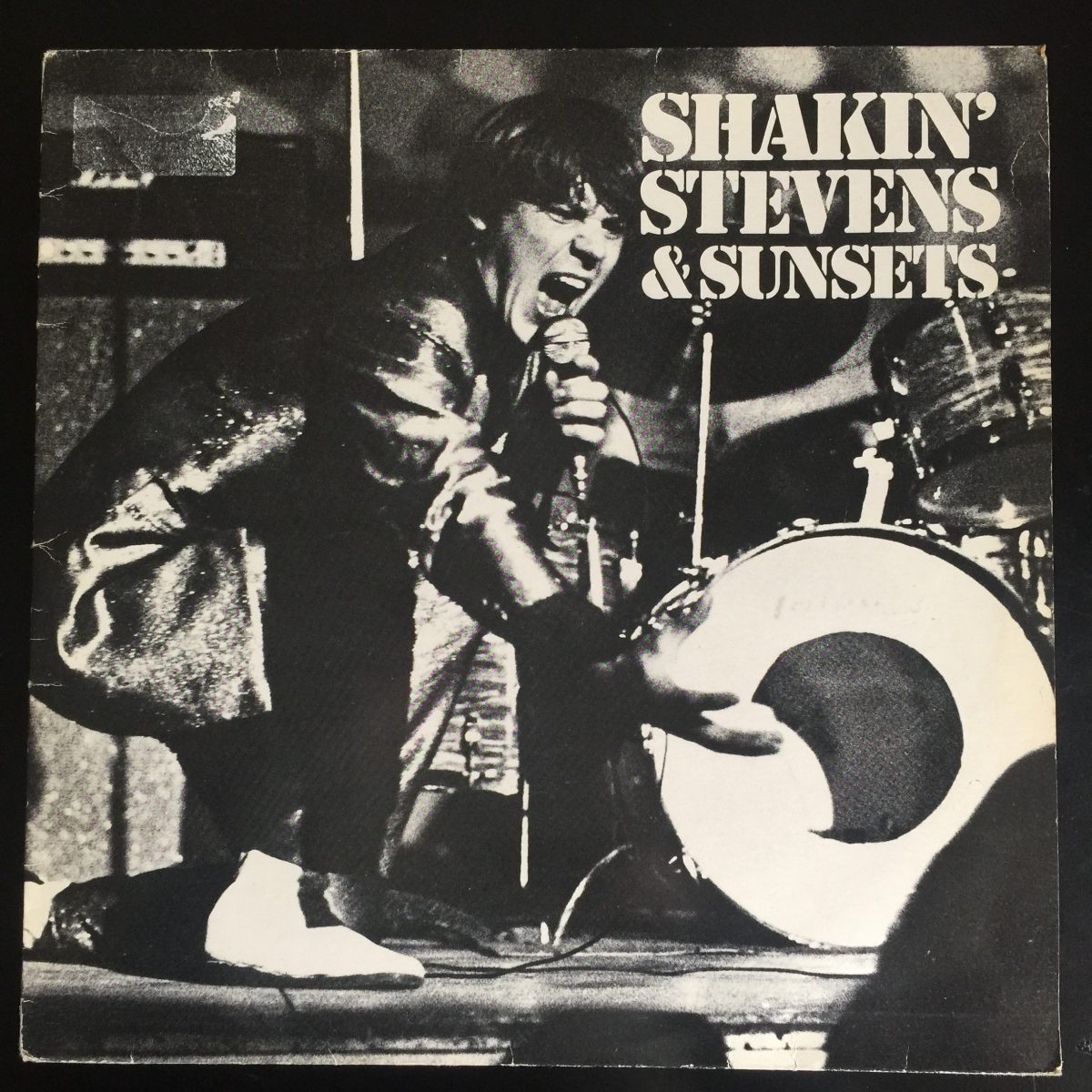 Front cover of the group’s 1973 LP released by Mint Records. No photo or design credit

I’m grateful to Peter Stanfield, media and arts professor at the University of Kent, for alerting me to these great images of members of Shakin’ Stevens’ backing band The Sunsets sporting T-shirts designed by the late Malcolm McLaren for sale in his shop Let It Rock at 430 King’s Road in the early 70s. 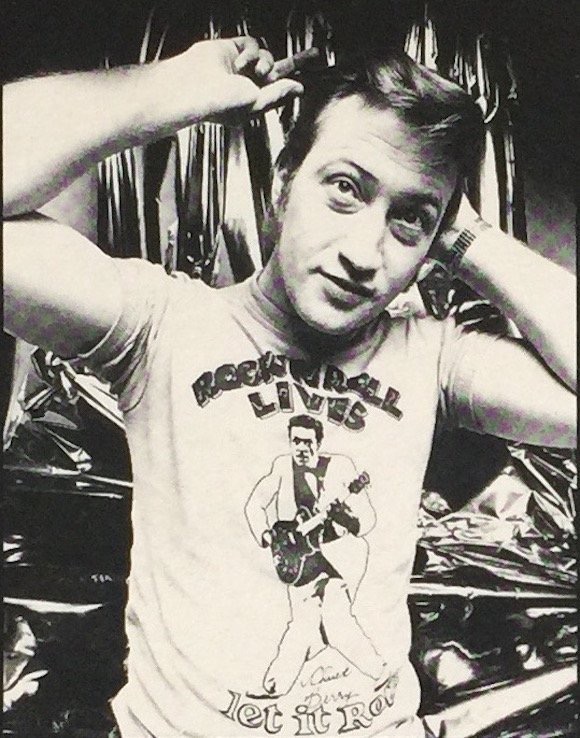 Cover detail: The Sunsets’ drummer Robert “Rockin’ Louie” Lewellyn. Note Let It Rock name at the bottom of the design. This originally appeared on another t-shirt, known as “Wembley 72” and also designed by McLaren in this period. 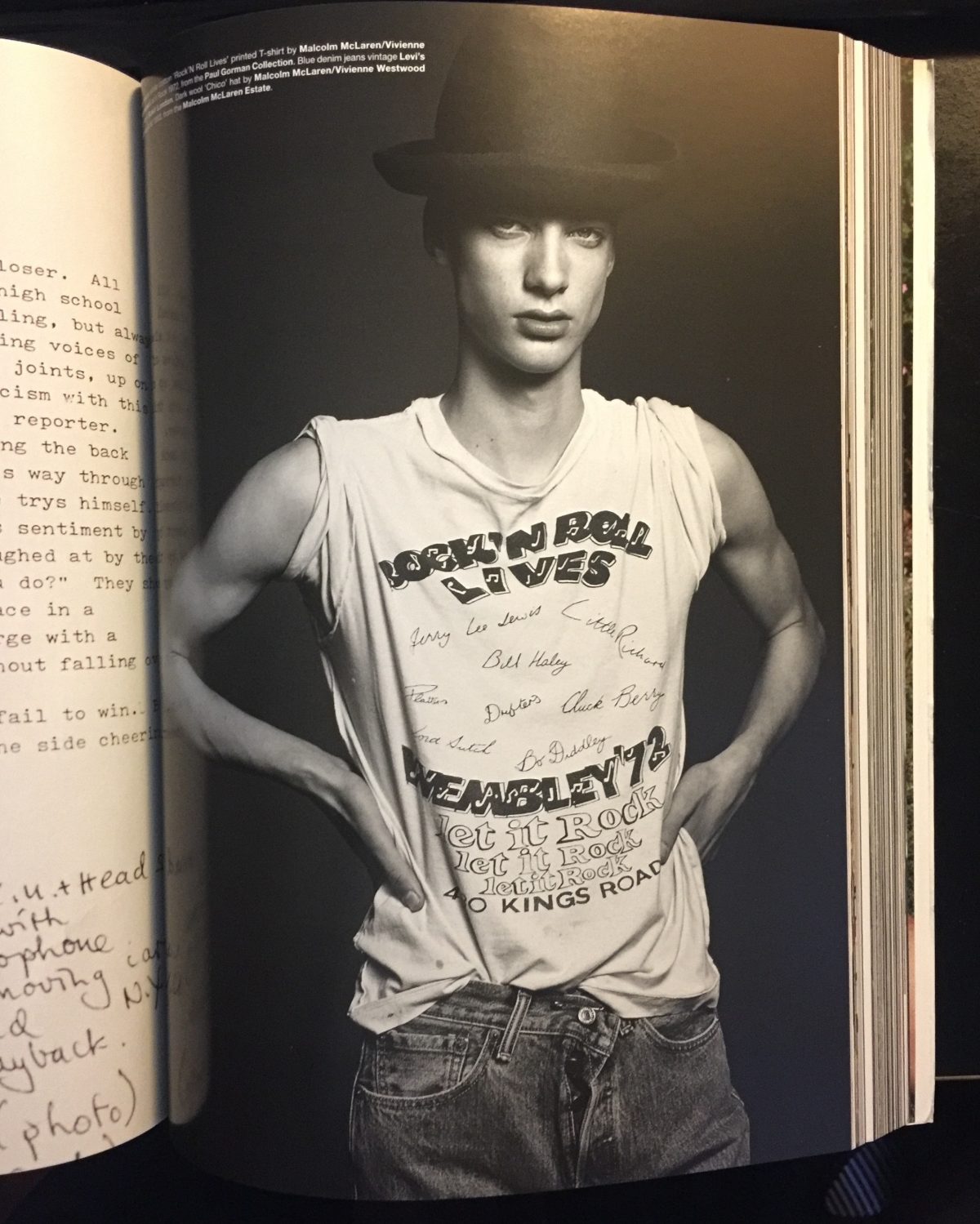 Three of The Sunsets wore Chuck Berry shirts for the portraits on the back cover of the sleeve to the group’s fourth LP, released in 1973.

McLaren conceived the design to coincide with the previous summer’s London Rock ‘N’ Roll Festival at Wembley Stadium. Chuck Berry was among the performers McLaren chose to celebrate in the form of T-shirts, the others being Little Richard (in the shirt bannered “Vive le Rock!”), Jerry Lee Lewis (“The ‘Killer’ Rocks On!”) and Screaming Lord Sutch. 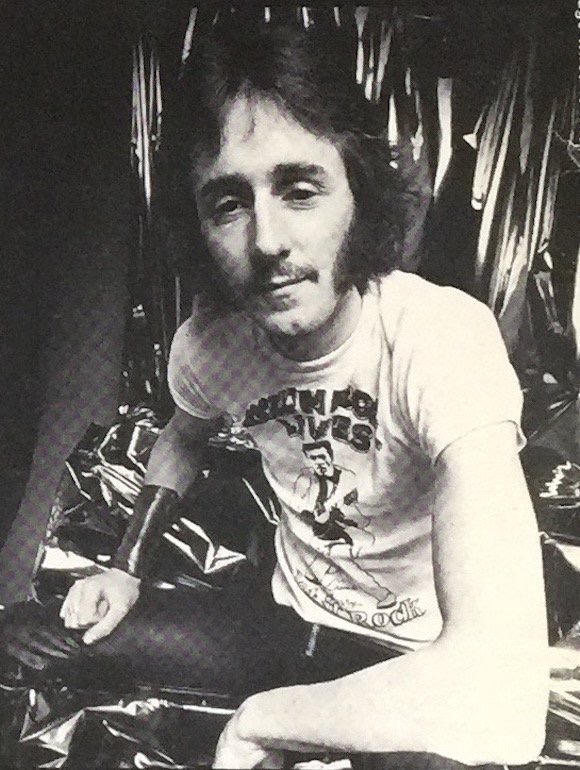 But two of the three Sunsets are wearing a rare variant on the original design. This includes elements which did not appear on the first set of Chuck Berry shirts: the hand-lettered Let It Rock title and address. These were evidently migrated by McLaren from another of his artworks from the period, known as “Wembley ’72”.

As far as I know, this is the first time that this hybrid design has come to light in more than four decades. I fully expect the replicators and fraudsters who bottom feed off the market for McLaren/Westwood rarities to start turning up “original” examples in the near future. 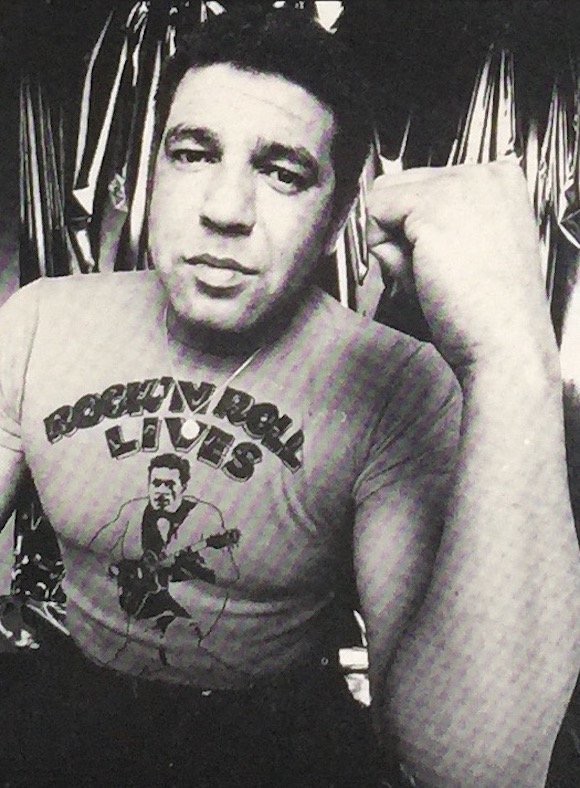 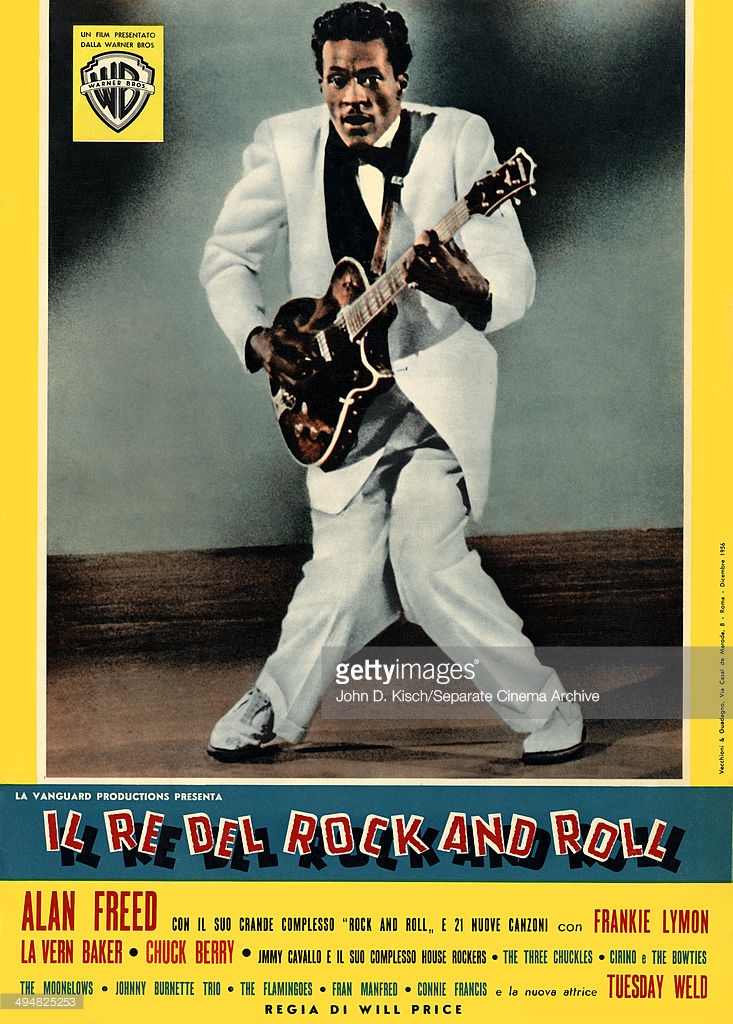 In realising his design, McLaren applied the Situationist technique of détournement by treating the components as “found” material (the image of Berry was in fact appropriated from a film poster stocked among the ephemera sold at Let It Rock). He then isolated and overexposed the figure of the guitarist and combined him with the statement “Rock ‘N’ Roll Lives” in retro musical note lettering and a facsimile of his signature. 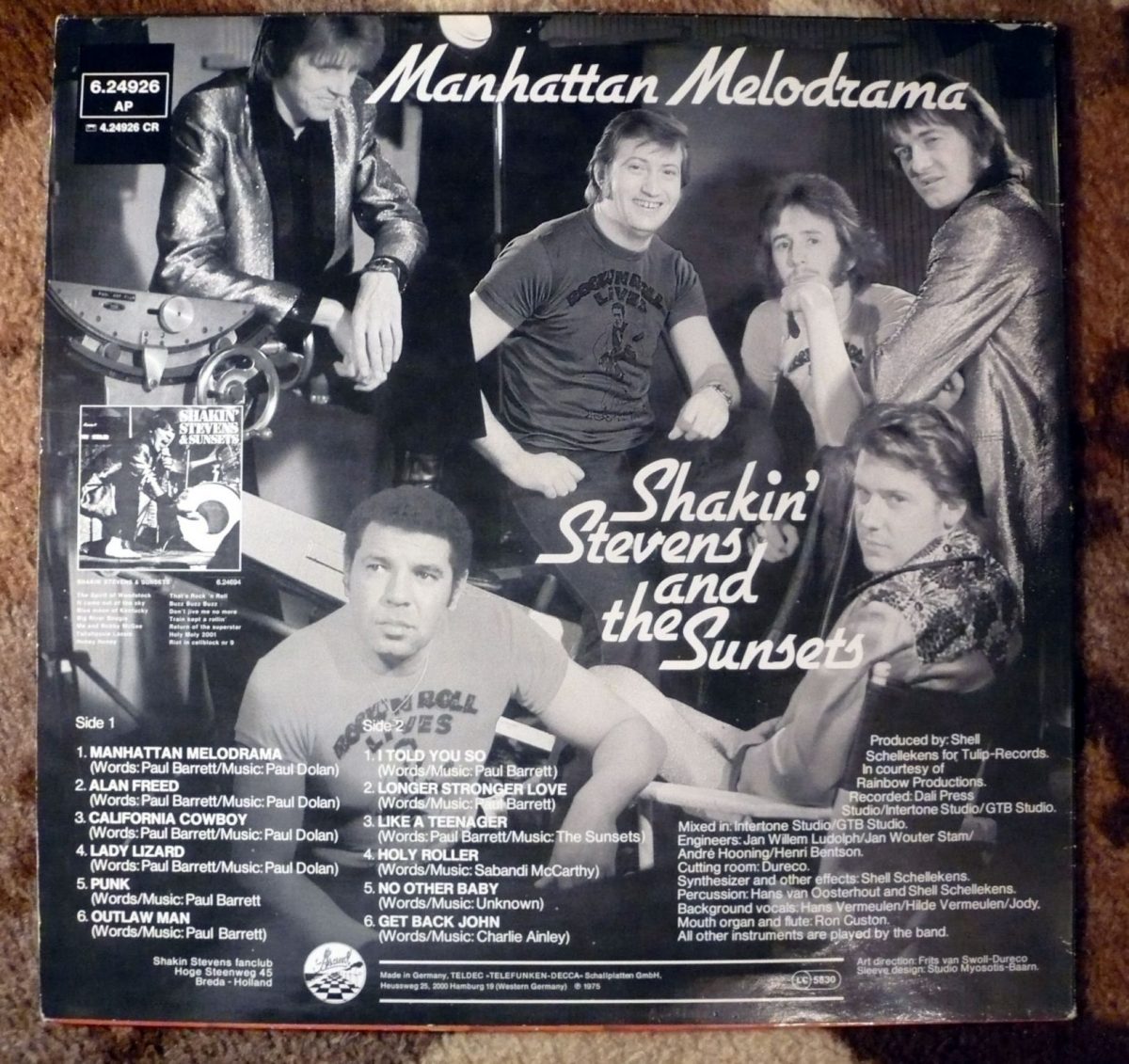 A group image of Shaky and The Sunsets from the same 1973 session appeared on the back cover of their second album Manhattan Melodrama, released a couple of years later.

I saw Shaky and the Sunsets in the mid-70s supported by The 101’ers at South London Poly; they were a great live act, always up for playing benefits and other gigs for good causes under the direction of their card-carrying Communist Party member and manager Paul “Legs” Barrett, who was a driving force in Welsh rock ‘n’ roll circles for decades and died just a couple of weeks ago at the age of 78. Read Barrett’s obituary here.

Here are Shaky and The Sunsets tearing it up in Sweden in 1972: 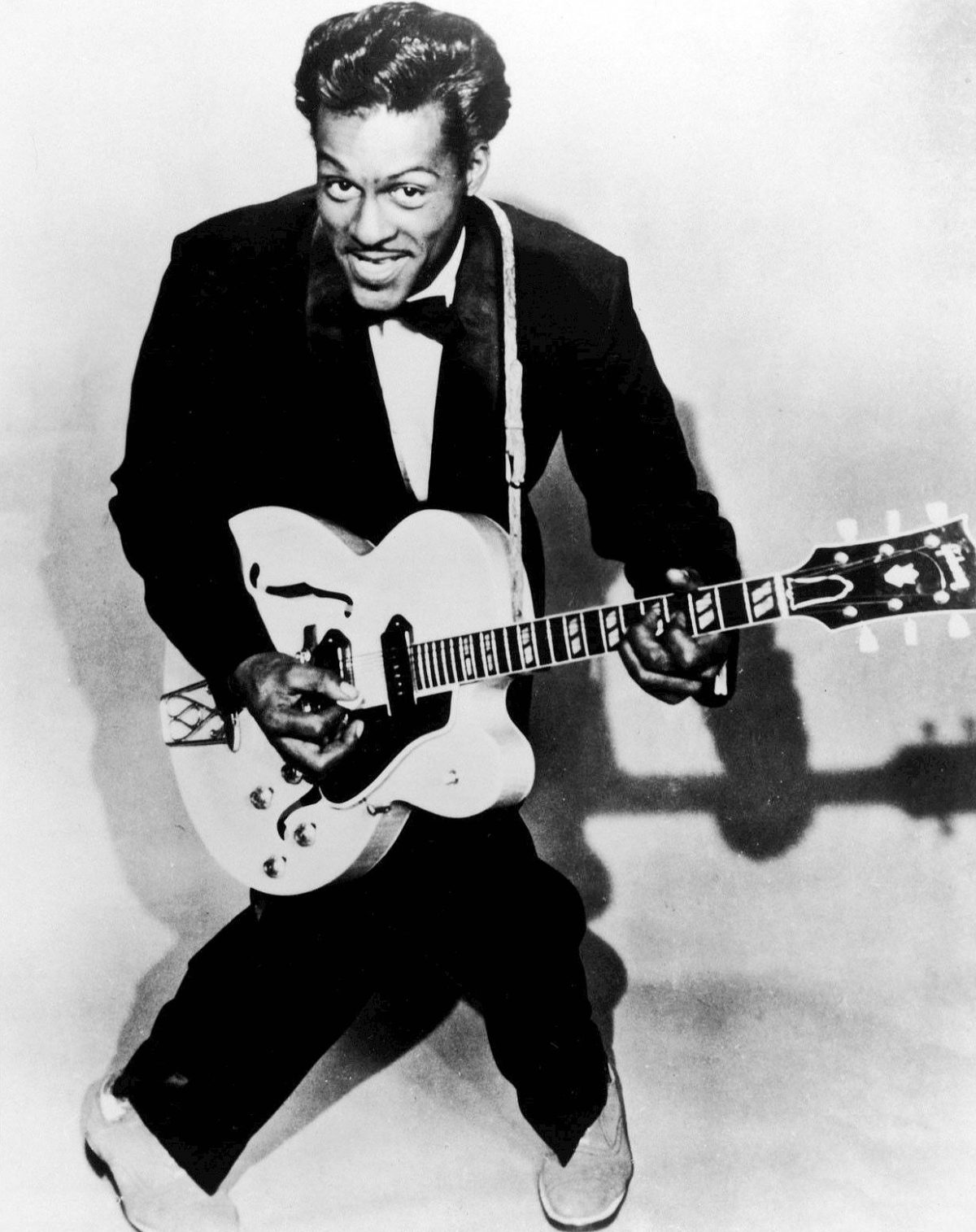 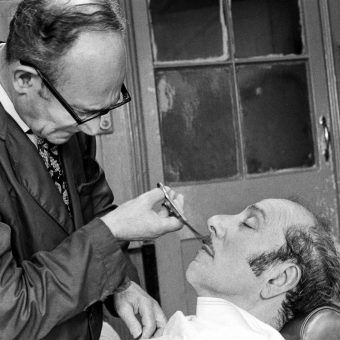