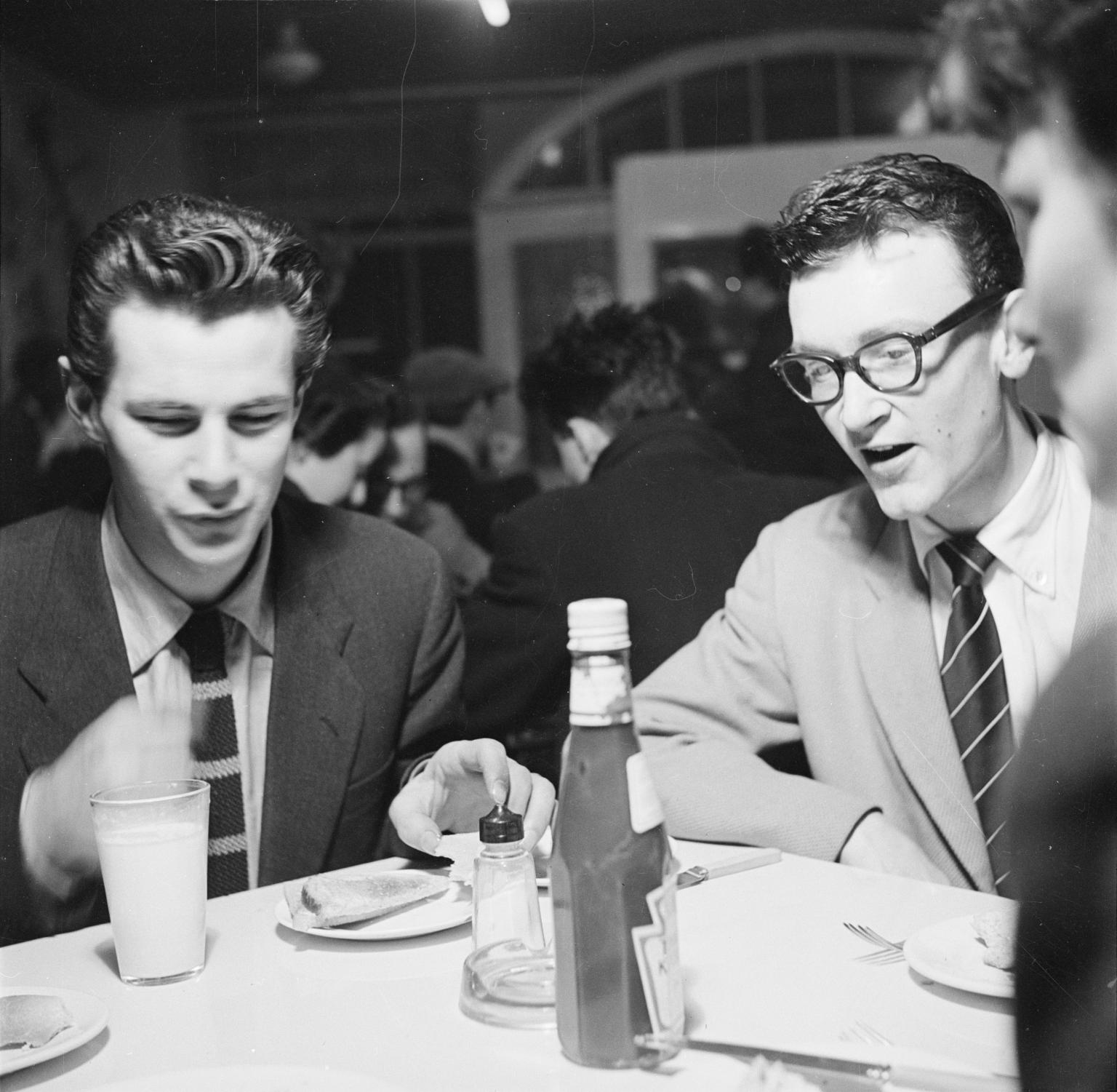 Photograph of jazz musicians at a table at the Harmony Inn on Archer Street including the saxophonist Derek Humble by Nigel Henderson c.1954

Archer Street behind the Windmill and Lyric Theatres first became the meeting place for musicians in the 1920s and 30s. In 1921 the London Orchestral Association merged with the Musicians’ Union and based themselves in Archer Street. The rather exclusive nature of the LOA meant that members of the jazz/ dance bands that were becoming more and more popular during the 1920s meant a not inconsiderable number of musicians were forced to meet outside in the street. It was primarily for these musicians that Archer Street became what Bill Kirkpatrick, writing in the Musician in June 1993, described the short little street as “a sort of dance band musicians’ Labour Exchange.” This meeting place for musicians continued until the 1950s when all kinds of musicians collected just behind the Windmill Theatre to find jobs playing for dance bands, jazz groups and even classical orchestras. It was also where they often picked up wages from the previous weeks gigs.

In the mid-1950s after the jazz clubs had closed and the clientele had left to go back to the suburbs on buses and trains. The jazz musicians would often meet up in the small hours at a big greasy spoon cafe in Archer Street incongruously called the Harmony Inn. Steve Fletcher describes it here.

When the sessions finished at eleven most of the kids ran for the late night buses and tubes back to the suburbs, but the few who hung about often ended up in the small hours in the only place around that stayed open through the night – a big greasy spoon caff in the middle of Archer Street audaciously named The Harmony Inn.

Archer Street ran behind Great Windmill Street and was home to the Musician’s Union offices. On Monday mornings in the 50s and 60s all manner of musicians would gather there to find engagements for dance bands, jazz groups and even classical orchestras. (Recently, BBC4’s Jazz Britannia series aired a documentary about it called The Street.)

Everything about The Harmony was unsavoury. Grubby Formica tables and chairs were ranged around a dismal counter in a totally bland room; the only colour was the red and white shirts on the table football teams. The most exotic fare was a cheese sandwich, tea and foul Camp coffee.

The clientele were even more dubious. The late-night trad’ fans who drifted in had little in common with the Harmony Inn’s regulars. The customers that it attracted after midnight were drawn from the spivs, petty and major criminals that gave Soho a bad name: Billy Hill, Tony Muller, Ronnie Chambers, Mick the Hammer, and the Capone figure of Jack Spot.

The caff was presided over by Dixie France who was allegedly a police informer who gave evidence at the Hanratty murder trial (and mysteriously committed suicide shortly after Hanratty was hanged in 1962.)

Those in the know said that there was an arsenal of weapons under the counter ready for any emergencies, mostly the punch-ups that arose over the football machine that occupied one corner of the room.

There was also a downstairs room used as a private club. Details of what occurred there are sketchy but are said to involve a pair of West Indian girls whose dancing skills were much ‘admired’.

Alongside the heavies and trad-merchants, The Harmony was also the hang-out for a group of modern jazz musicians that had formed around tenor-sax man Ronnie Scott. (Jazz Modernists would have no truck with trad’ which they considered an anachronism. Their heroes were the New York bop musicians like Charley Parker, Dizzy Gillespe and Thelonius Monk.)

The audience for modern jazz was relatively small and there was no central venue for it in the West End, but the Harmony Inn played a crucial role in its development.

Ronnie Scott’s Club house-magazine editor Jim Godbolt recalls: “We (including Ronnie Scott, Peter King, Benny Green, Derek Humble, Tony Crombie and Jimmy Deuchar) were all sitting in the Harmony Inn in Archer Street, near Piccadilly, one day in January 1953 when we conceived the idea of forming a nine piece co-operative band and it turned out to be one of the better ideas we had that year.”

The Harmony cafe crew would go on to set the foundations for modern jazz in England. 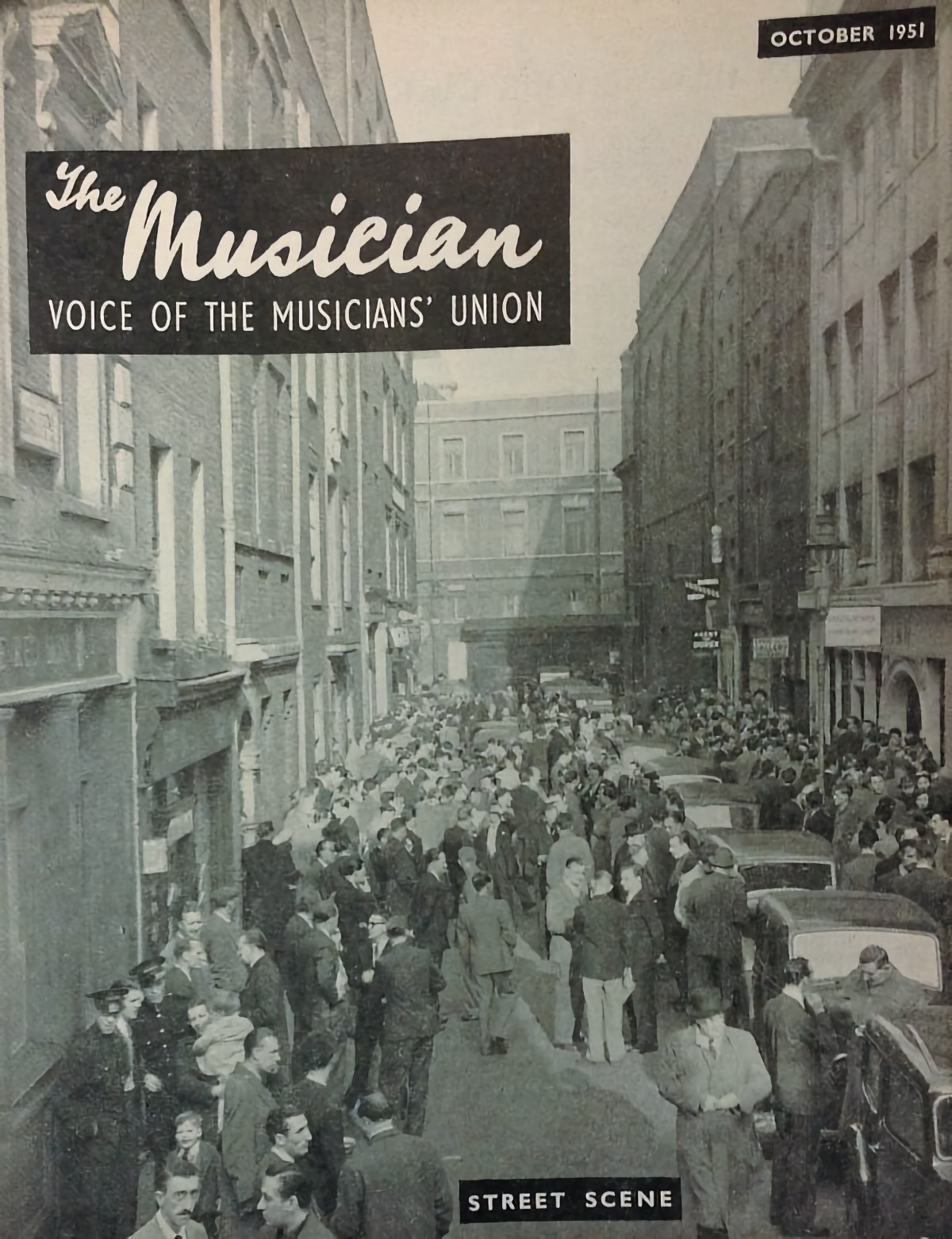 The front cover of this issue The Musician magazine from October 1951, titled “Street Scene” features Archer Street in Soho, London.  It became a meeting place for musicians especially on Mondays when they would come and pick up their wages. 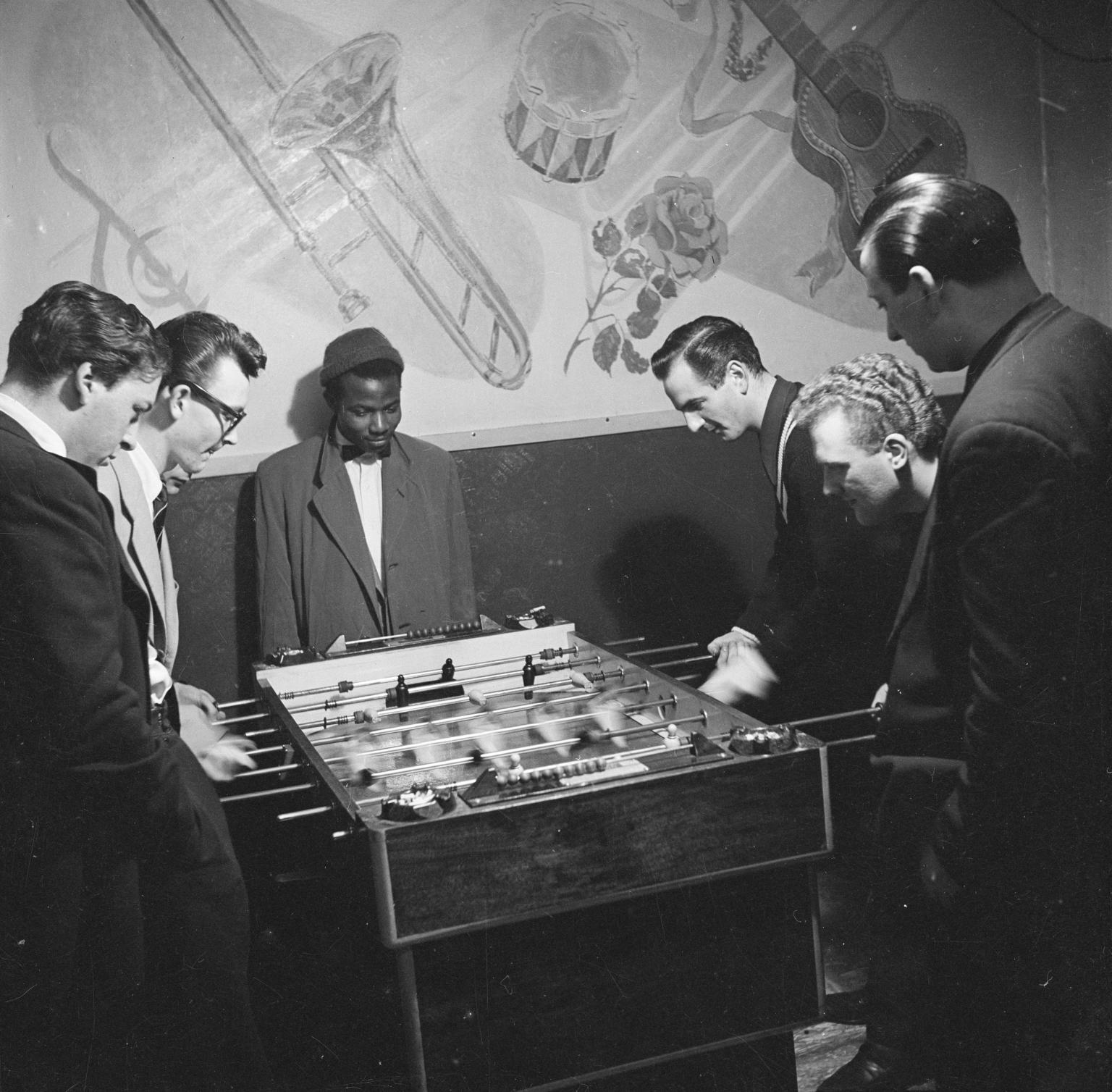 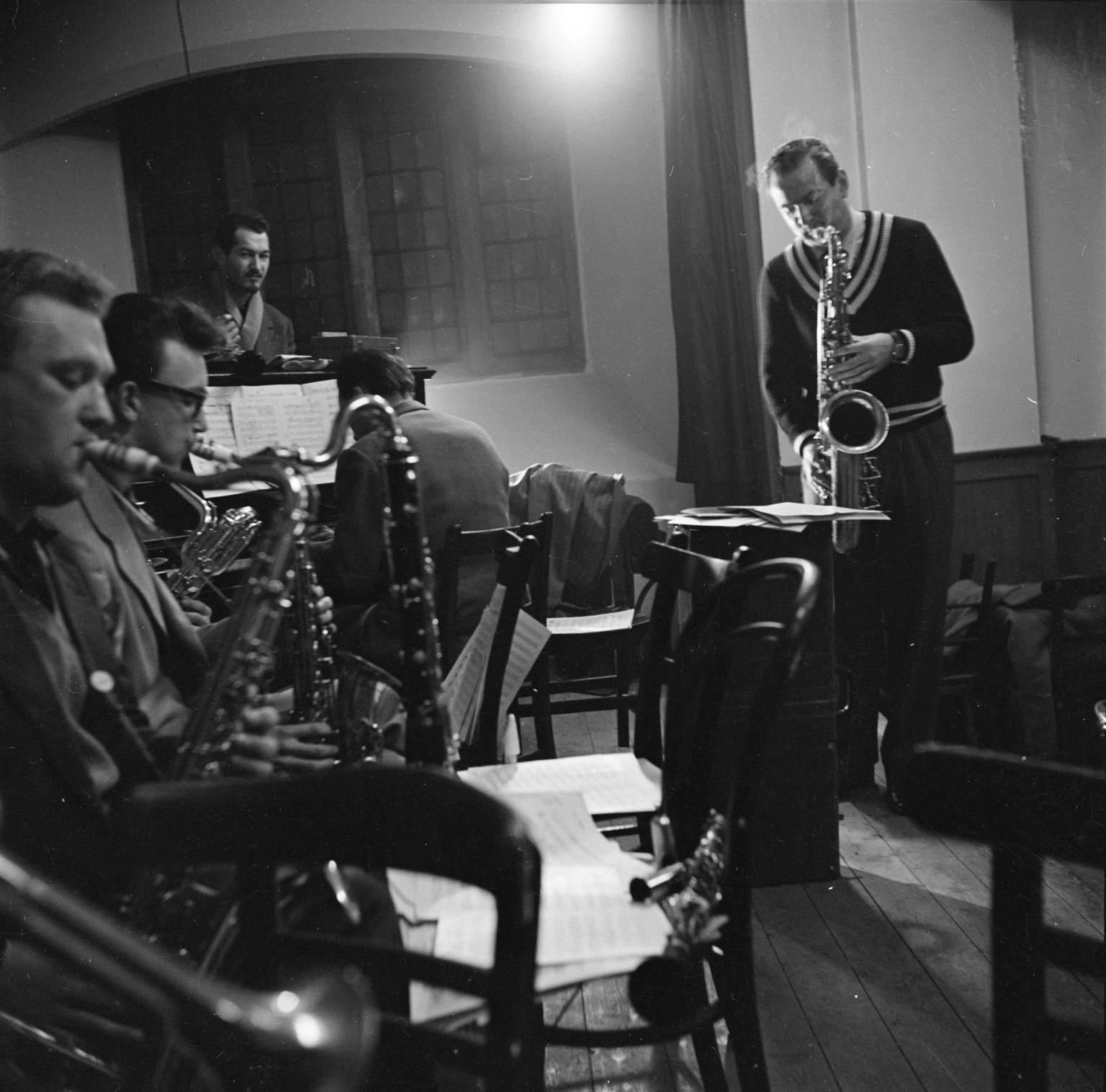 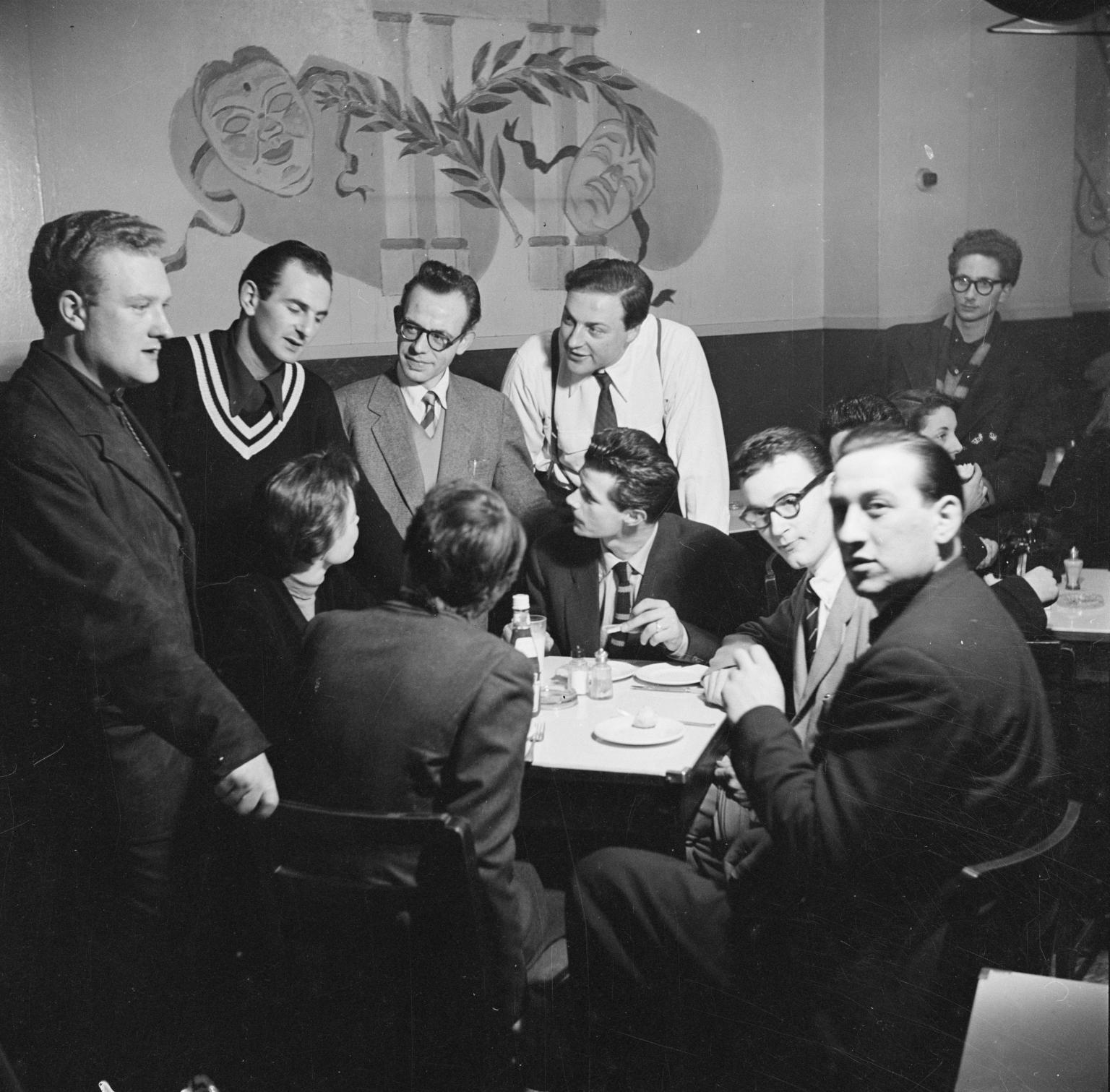 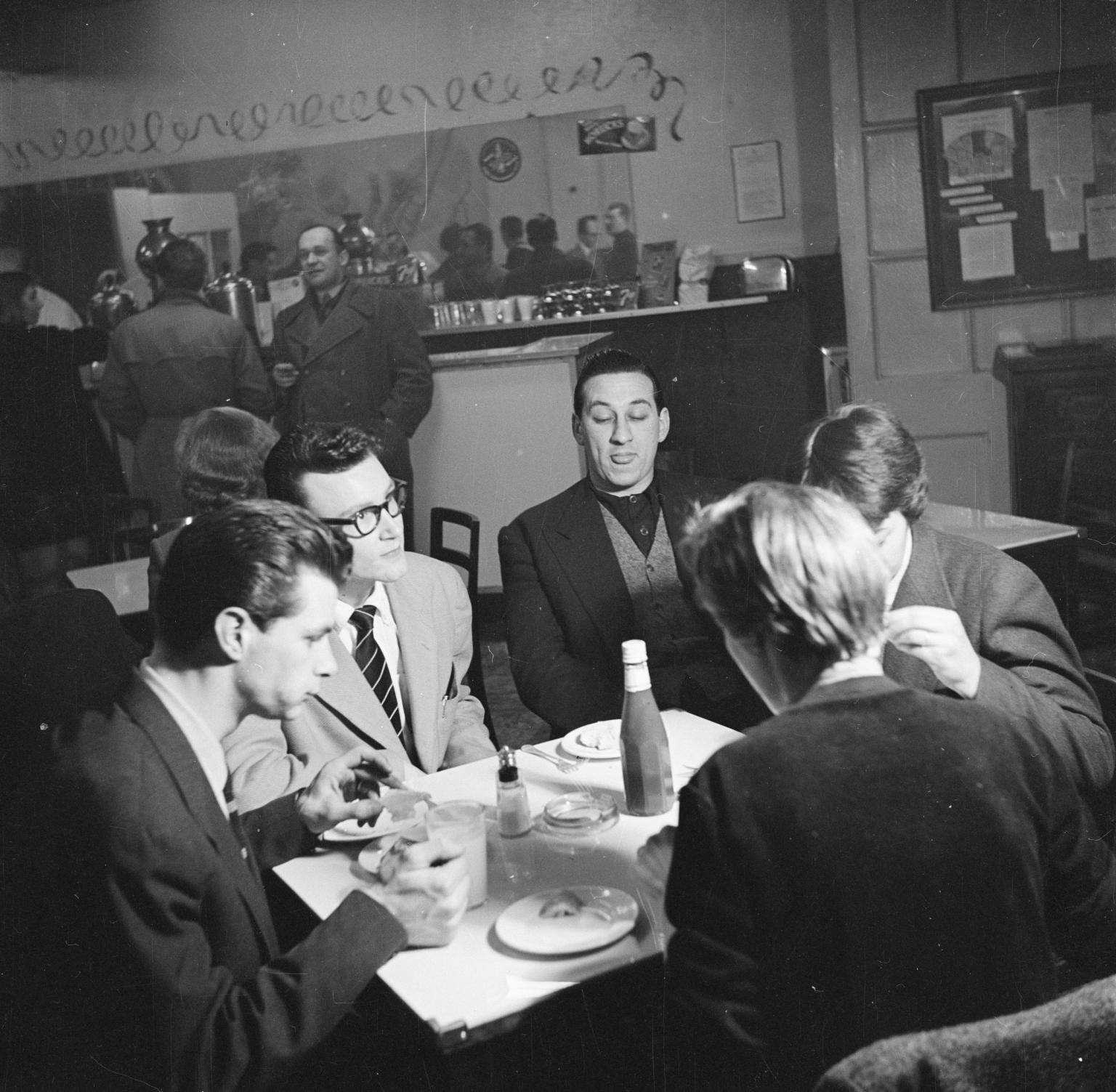 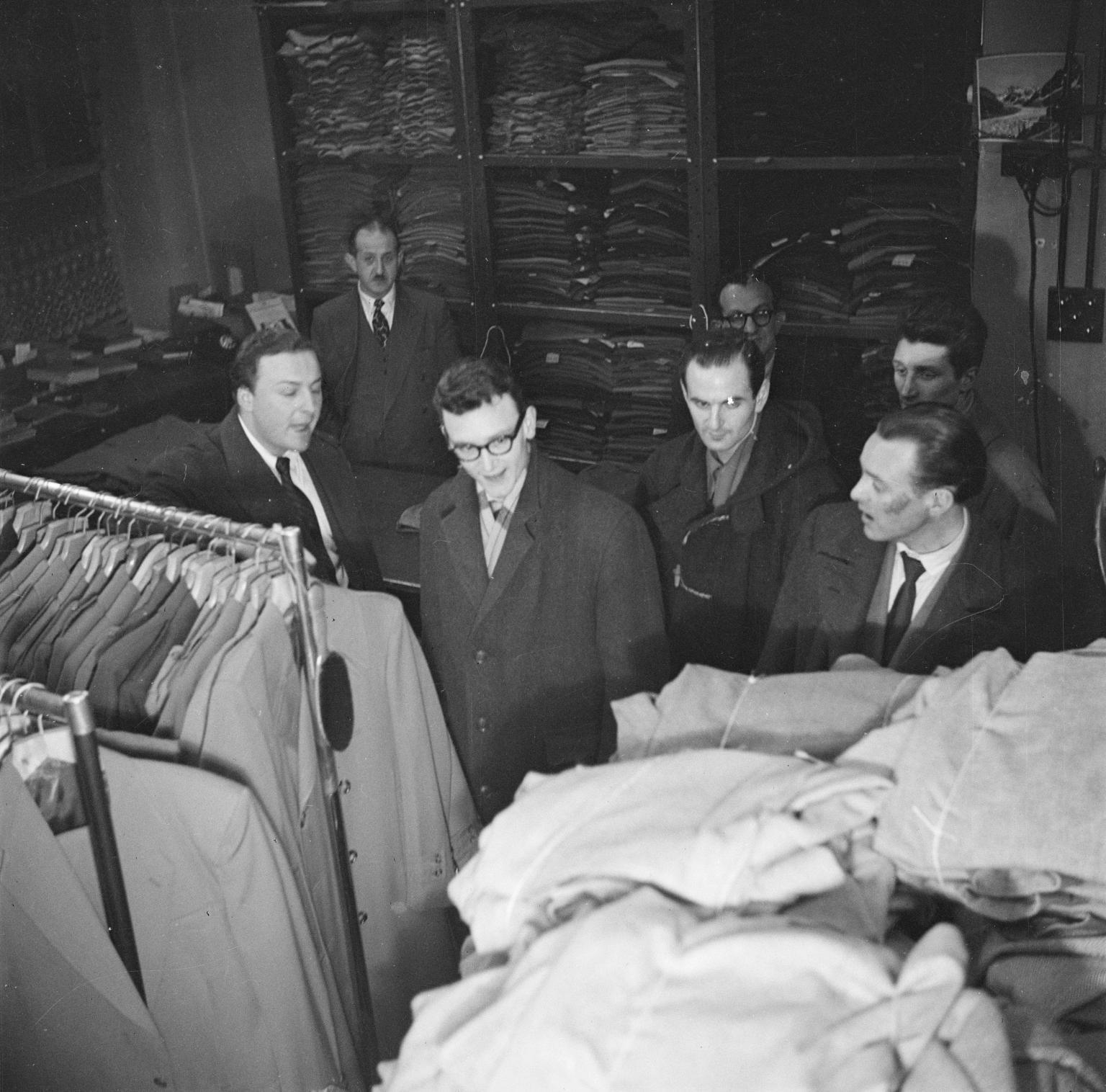 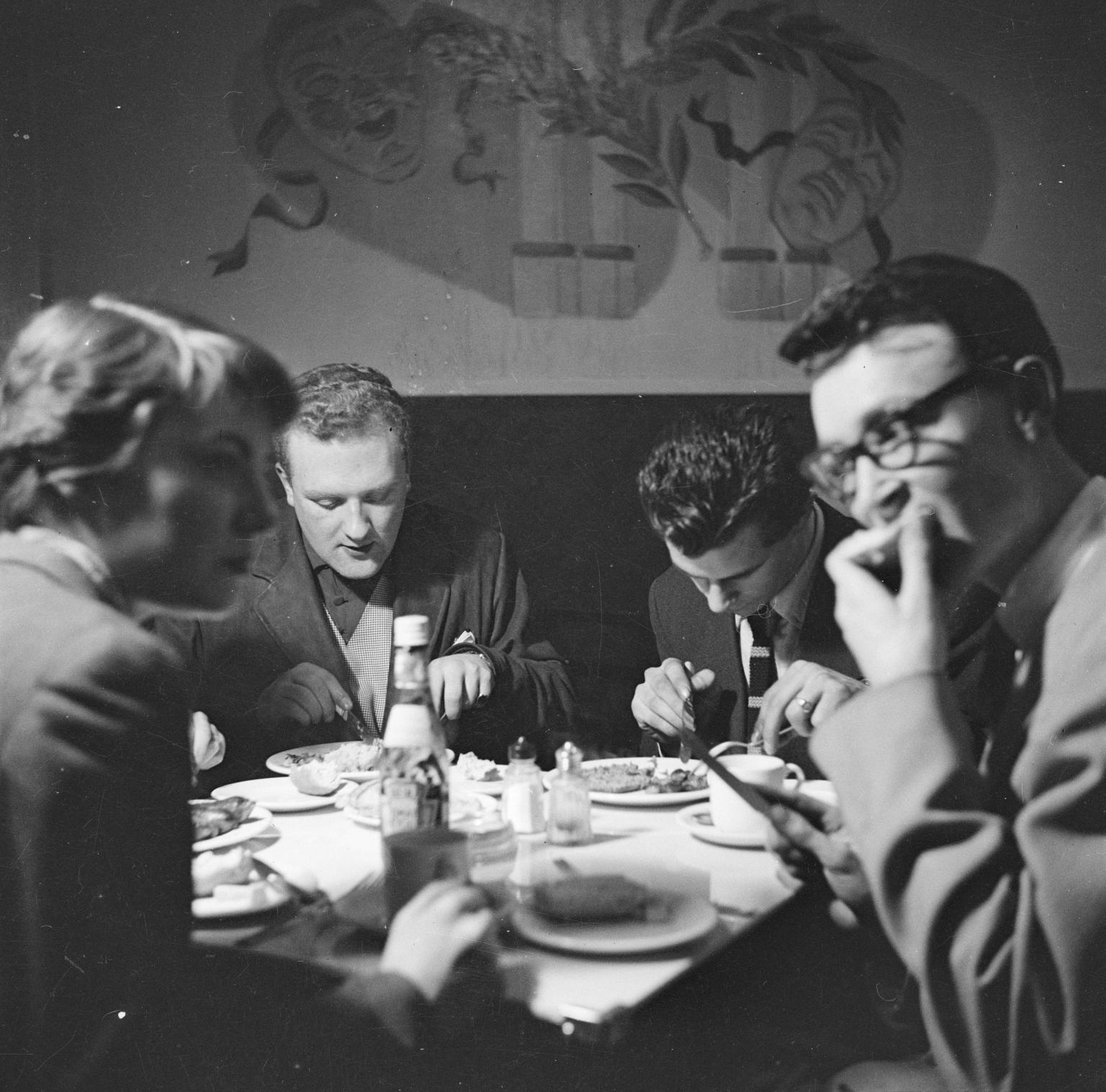 Musicians eating at the Harmony Inn by Nigel Henderson 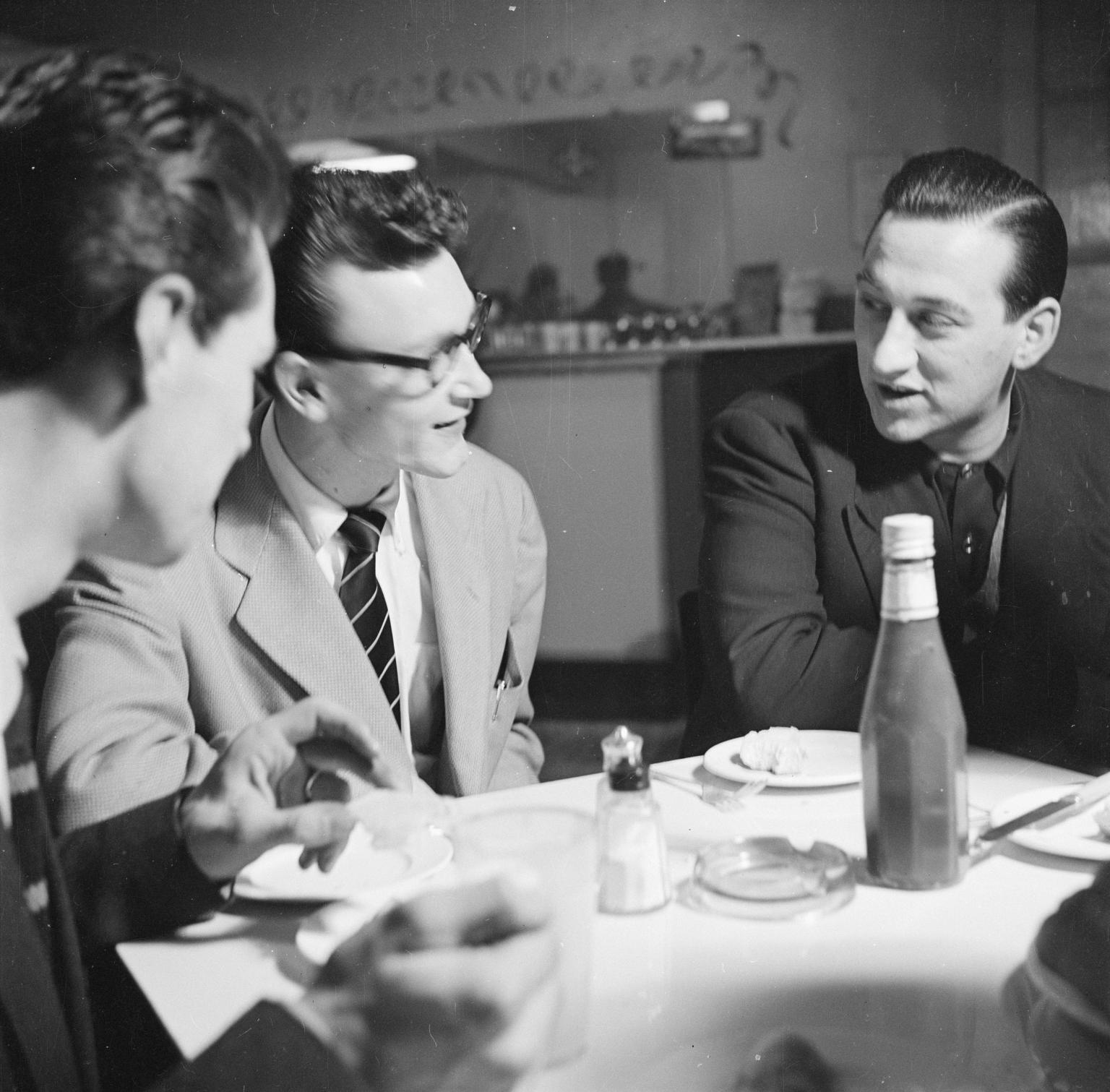 Tony Crombie and Derek Humble at a table in the Harmony Inn, by  Nigel Henderson c.1954 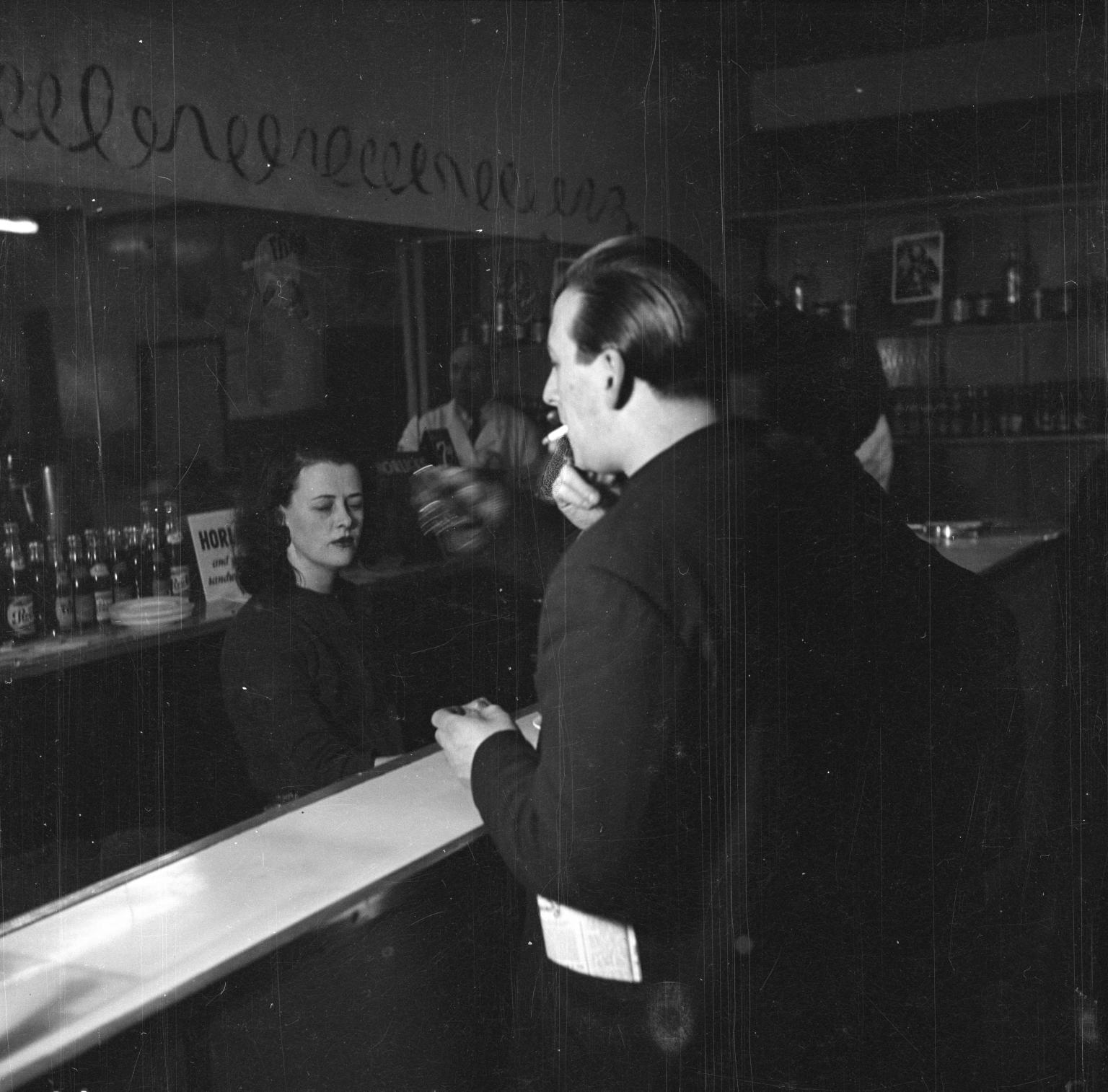 Unidentified man at a bar by Nigel Henderson c.1954 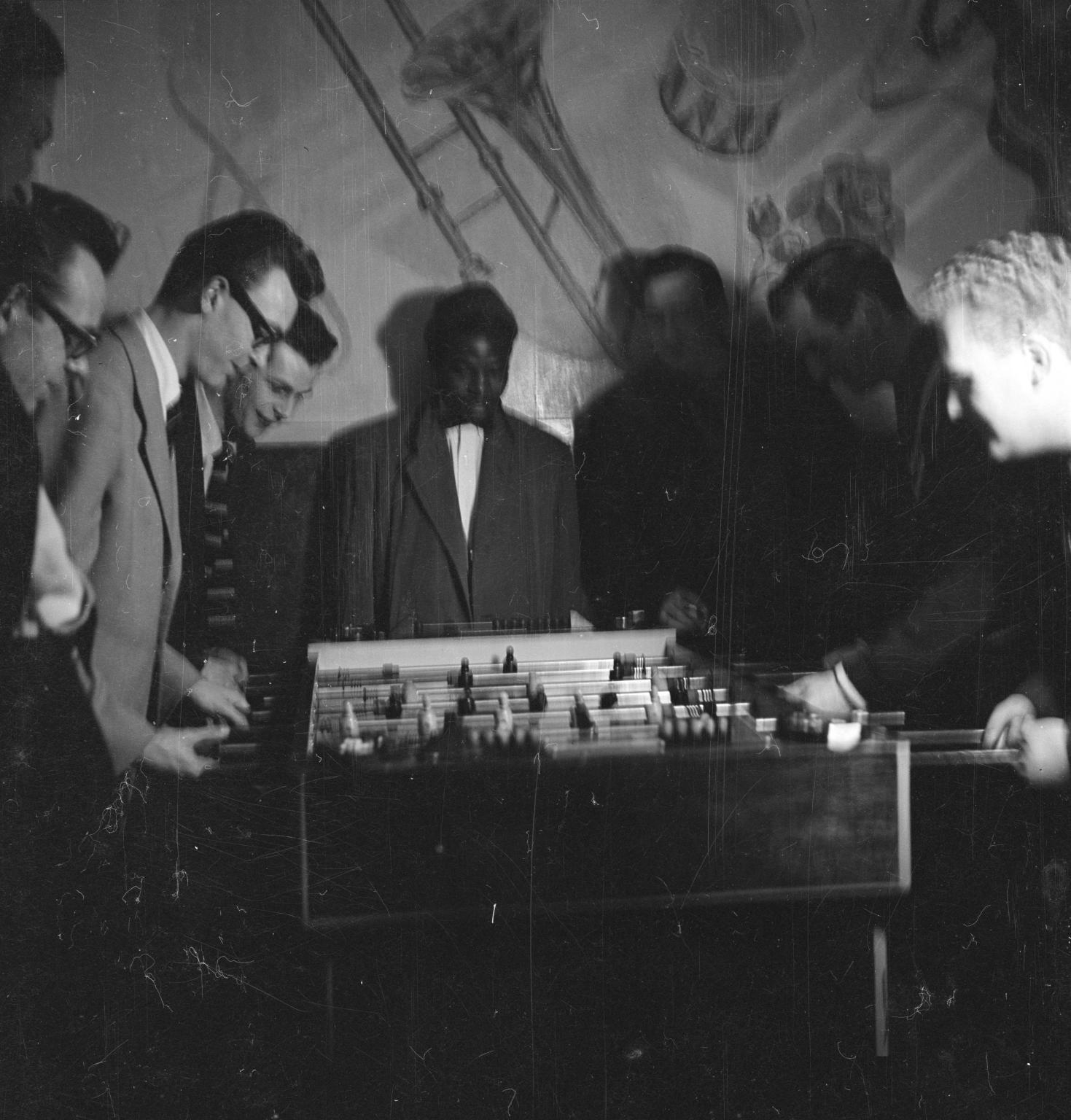 Photograph of jazz musicians playing table football, including Tony Crombie and Derek Humble Nigel Henderson 1917-1985 The papers were acquired by the Tate Archive from Janet Henderson and the Henderson family in 1992. http://www.tate.org.uk/art/archive/TGA-9211-9-7-95-1 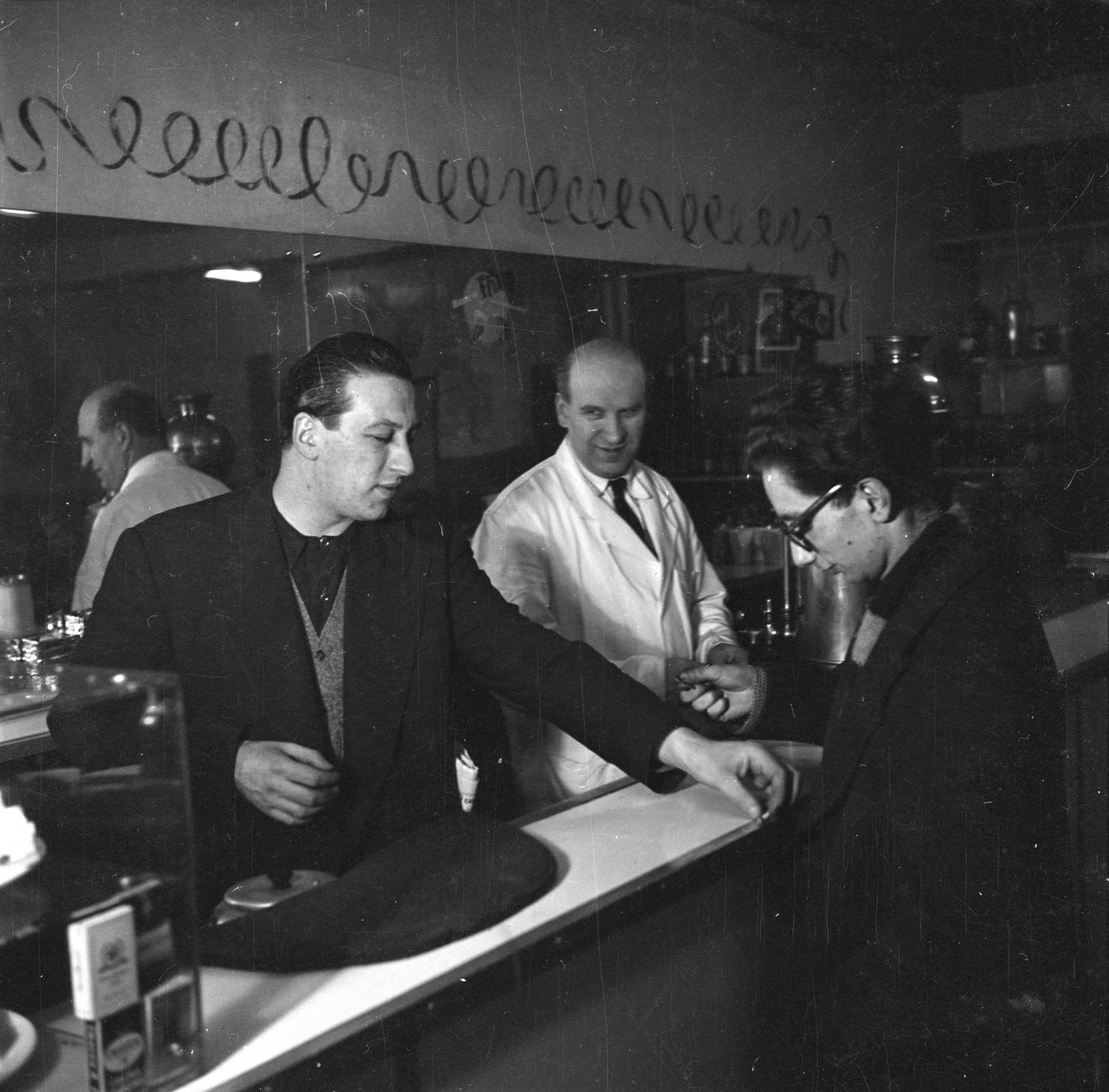 Photograph showing an unidentified man at a bar Nigel Henderson 1917-1985 The papers were acquired by the Tate Archive from Janet Henderson and the Henderson family in 1992. http://www.tate.org.uk/art/archive/TGA-9211-9-7-90-1

This poem, by Syd Gamage, appeared in the July 1926 edition of the Musicians’ Journal:

Oh! what a sight is Archer Street,
Where all sorts of musicians meet,
You there will find a motley crew
Who gaze expectantly at you
With longing eyes, as if to say –
“Got any ‘dates’ to give away?”
It’s there the Jazzers congregate,
Who, all dressed up, just watch and wait;
They hang about in threes and fours;
Blocking the Club and MU doors:
Foreigners of every kind,
Mostly with noses well defined,
Talk about the tongues of Babel –
Understand them if you’re able.
There’s Saxophonists with with cigars,
In modern syncopating cars;
Would be Orpheans with their lutes,
And Sliphorn guys with wow-wow mutes;
Pig-skin wallopers by the score,
The demons of the ballroom floor –
Some are drummers, some are not,
And some are – well, you don’t know what!
Some of them are really clever,
Some of them have necks of leather.
There’s long-haired cranks and stiff-necked swanks:
You’d think they owned a dozen banks!
Fiddlers, Cellists, Contra Basses,
Connoisseurs who know what Bass is!
Oboes, flutes and clarinets,
And some they call the “Nevergets,”
And tipsters, those prophetic chaps,
The specialists in Tom Hall Naps.
Conductors, too, they’re ‘on the beat,’
Hoping to find a vacant seat;
Violas, Trumpets and bassoons,
And buskers playing rotten tunes;
Numerous snobs, displaying fobs –
Some seem to think it gets them jobs;
And may there, who top the list
As soloists – at solo Whist!
Euphoniums and Sousaphones,
Those things that make you think of Doans!
Pianists and Pulverisers,
Organists and Organisers;
Guitars and Banjos, Horns and harps,
And lots of Flats, the dupes of Sharps;
Alien agents with their touts,
Exploiting all the down and outs;
And, of course, there’s carping critics,
Who know nought of analytics;
It’s this, or that, is not just so,
The more they say, the less you know:
That’s what you see in Archer Street,
Where all sorts of musicians meet.