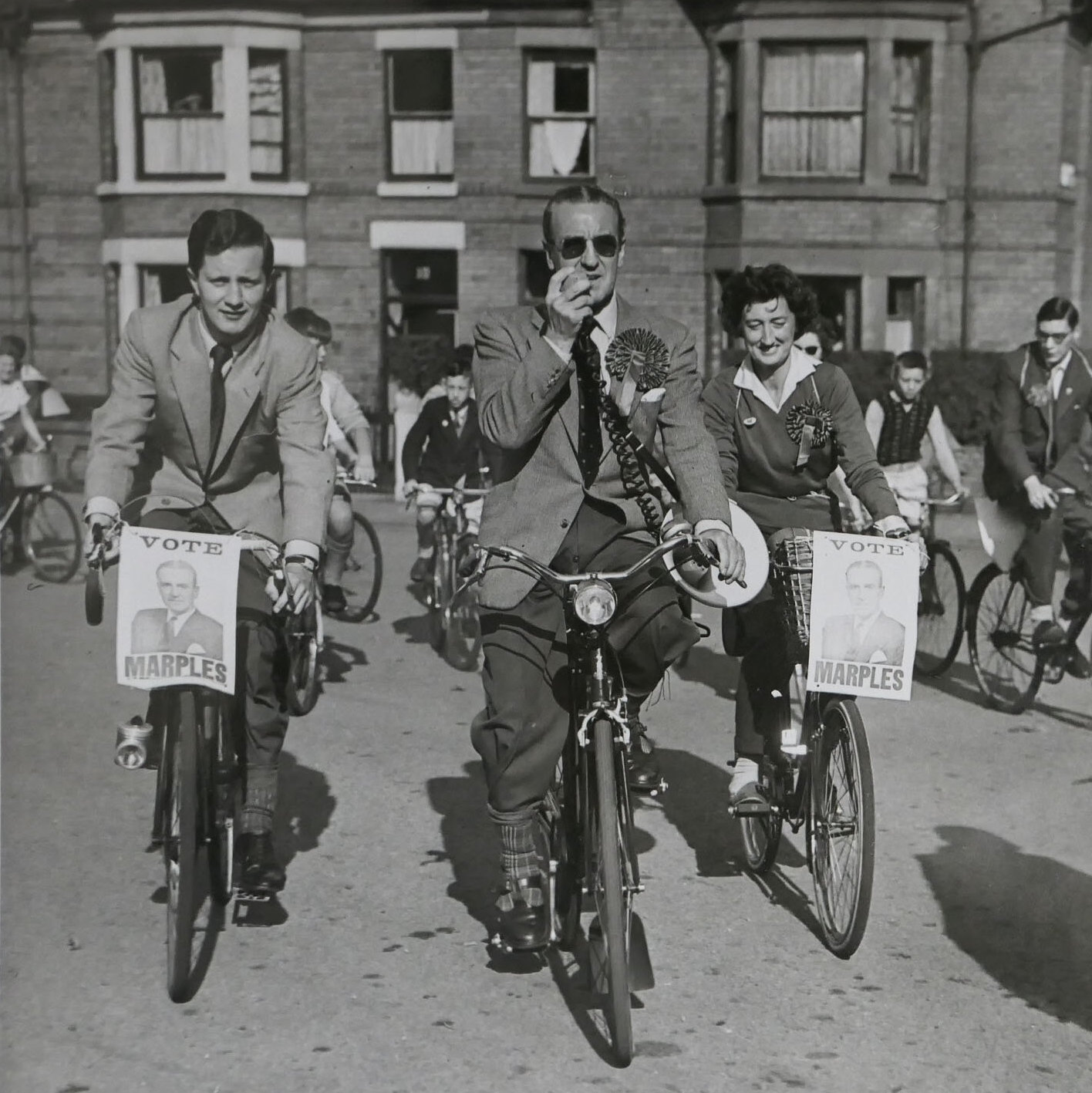 On 3rd December 1959, presumably just in time for the Christmas Shopping, Ernest Marples, the relatively new and eager Conservative Transport Minister, introduced the Pink Zone into Soho and the West End. We probably all have our own ideas exactly what a ‘Pink Zone’ would mean these days in Soho but at the end of the 1950s it meant a new-fangled no-parking area in an attempt to ease traffic congestion and meant that people at peak times could now only park at parking meters or official car-parks. There’s a press photo taken for the London Evening News that shows Gerrard Street, now the main thoroughfare of London’s Chinatown of course, after this new pink Zone had been introduced. 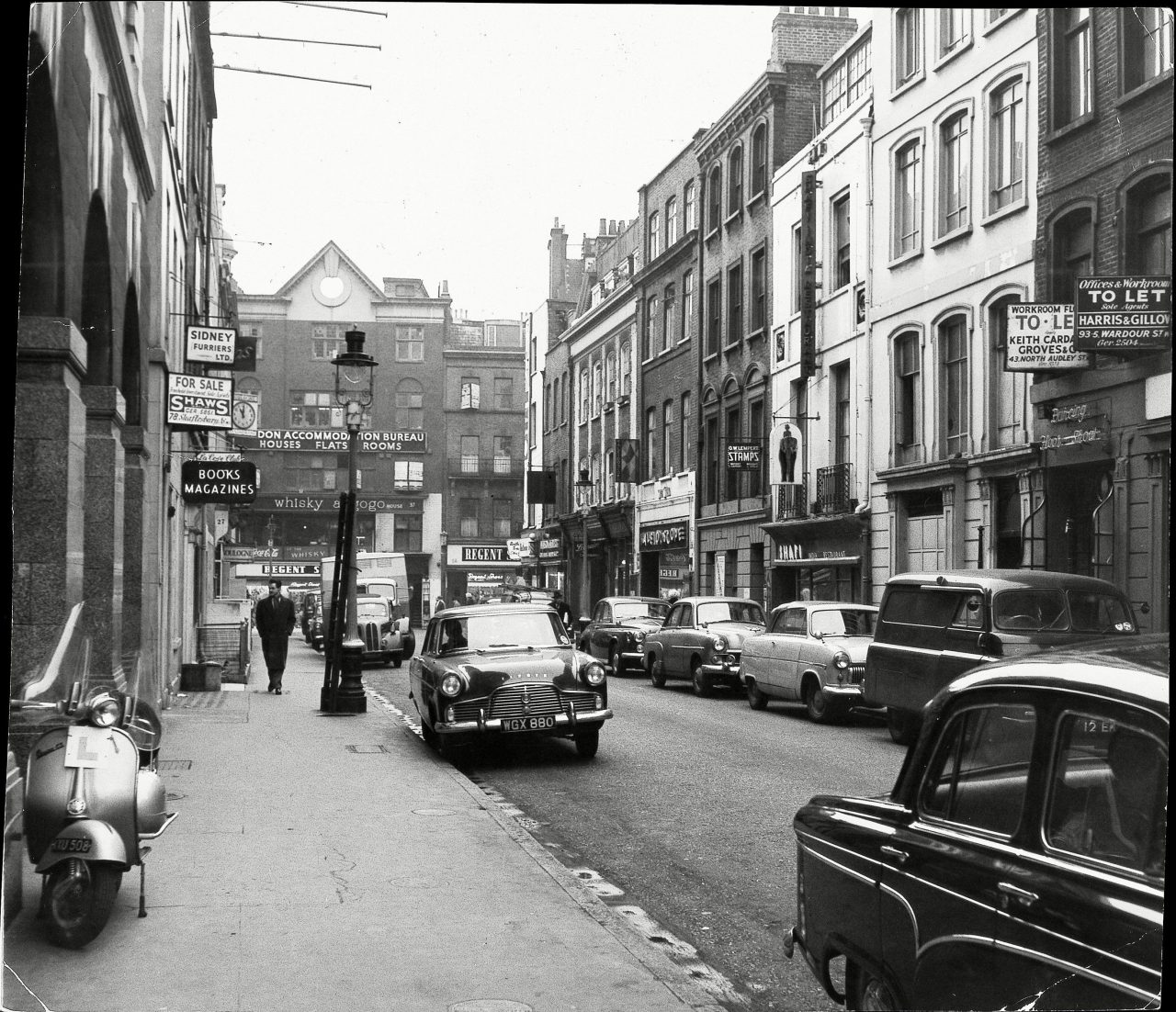 The photograph looks towards Wardour Street where we can see Regent Shoes and the building that is now a branch of the O’Neill’s Irish (pub with big-screen sport, live music and Irish-influenced food and drink menus) upstairs was then called Whisky A Go Go. But what’s striking is how filthy and shabby Gerrard Street looked. Over half of the buildings were either for sale or for let and, notably, there is not one single Chinese restaurant in the whole of the photo.

Ernest Marples was energetic can-do sort of person but the working class Mancunian stood out from the almost all his fellow Tory MPs not least for his tendency to wear blue suits with orange-brown shoes. Harold Macmillan liked Marples but when Edward Heath, who didn’t, became the Tory leader he was dropped from the Shadow Cabinet after the 1966 election. There was also no place for Marples when Heath formed a Government in 1970.

Marples was born in Levenshulme, Manchester, Lancashire. His engineer father was a Manchester Labour campaigner, while  his mother had worked in a local hat factory. Marples attended the Stretford Grammar School and by the age of 14 he was already active in the Labour Movement, as well as earning money by selling cigarettes and sweets to Manchester football crowds. After school Marples worked as a miner, a postman, a chef and an accountant. In 1941, during the Second World War he was commissioned into the Royal Artillery and rose to the rank of captain. He was medically discharged in 1944. Marples had joined the Conservative Party and in 1945 was elected as the MP for Wallasey. In 1951, Winston Churchill appointed him a junior minister in the Conservative Government.

In 1957, Harold Macmillan made Marples Postmaster General during which time he brought in the controversial Postcode and and also the unfortunately named STD dialling which meant that people could make national calls without going through the operator first. For anyone less than about seventy STD stood for Subscriber Trunk Dialling. Marples also introduced Government Premium Bonds thus inaugurating the ‘electronic random number indicating equipment’ to select the lucky winners—known by the acronym ‘Ernie’ – Marples’.

Publicity poster for Marples’ 1945 election campaign for the constituency of Wallasey, Merseyside. (The Papers of Ernest Marples, MPLS 1:1:2) 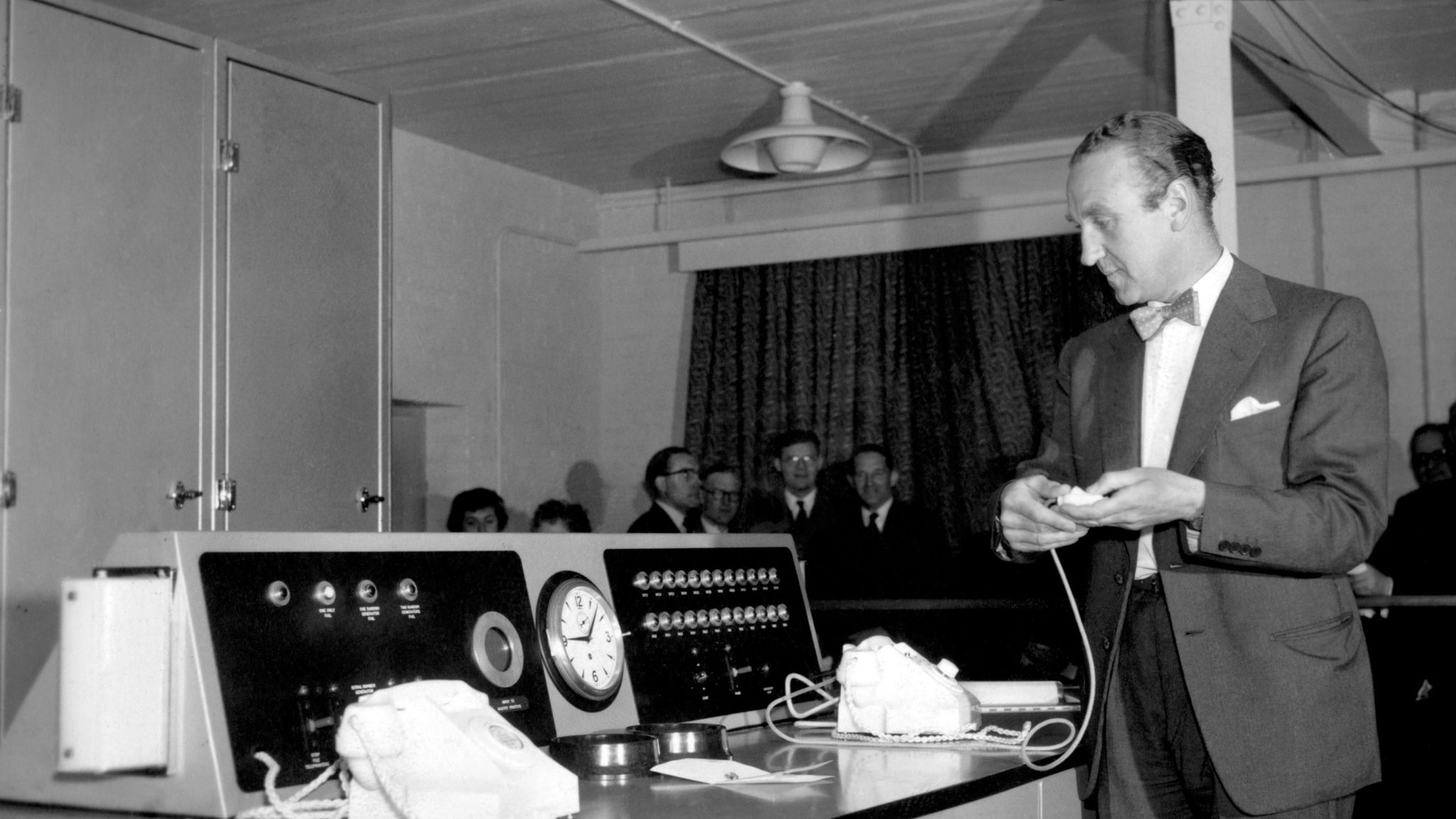 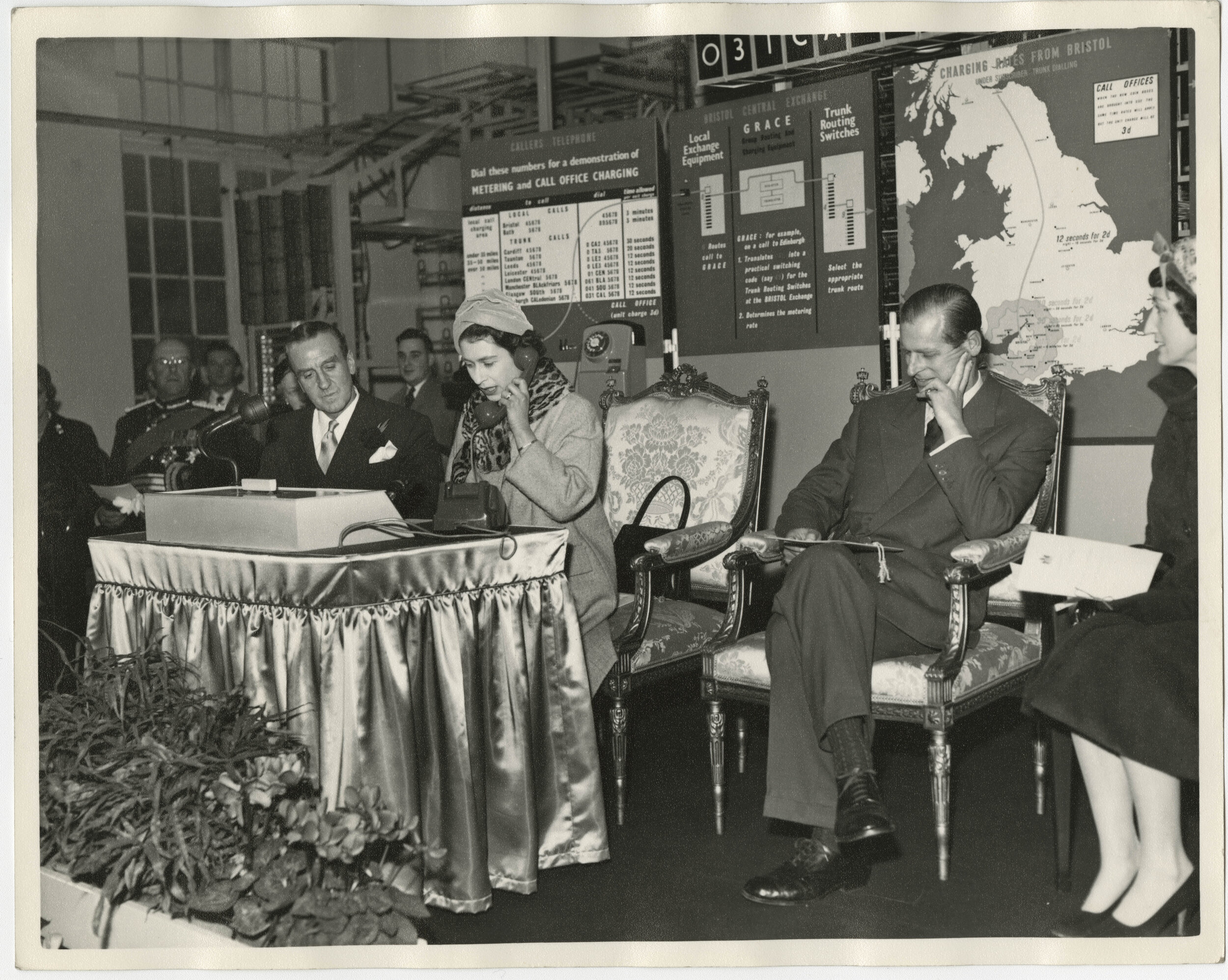 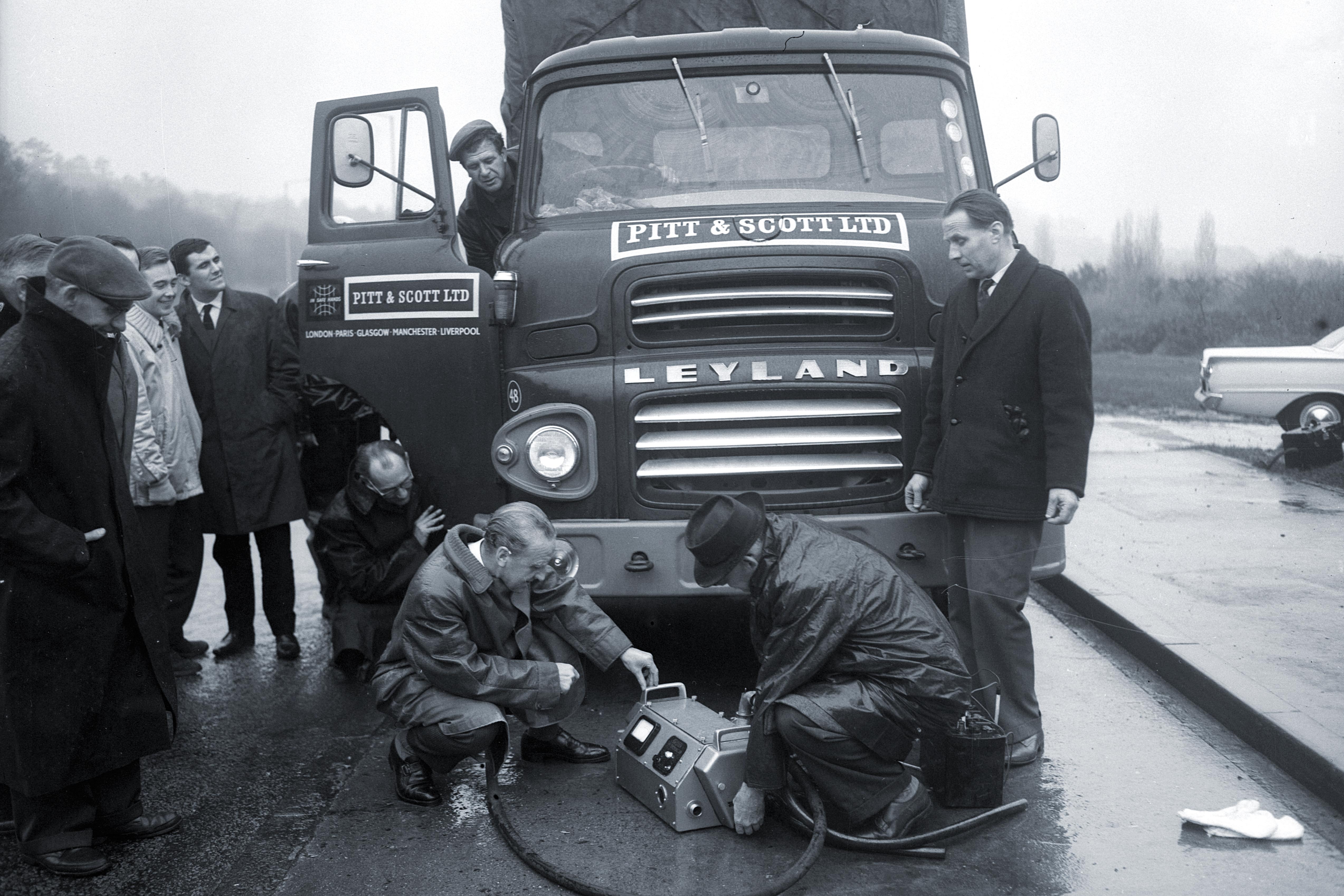 Marples became the Minister of Transport from 14 October 1959 until the Conservatives lost the general election on 16 October 1964. As Minister of Transport, Marples introduced many policies that are still with us today – not only did he oversee the introduction of parking meters in London’s West End and elsewhere, he was also responsible for the provisional driving licence in 1958, level crossings in 1962 and two Transport Acts. The first of which, the Road Traffic Act of 1960 introduced the MOT test, roadside single yellow lines and double yellow lines, traffic wardens, and the 250 cc engine limit for learner motorcyclists.

The second, the Transport Act of 1962 brought in to place the British Railways Board, with the infamous Dr Richard Beeching as its chairman.  The Act was described as the “most momentous piece of legislation in the field of railway law to have been enacted since the Railway and Canal Traffic Act 1854”. Dr Beeching’s brief was to recommend and implement such changes as were necessary to end the losses of British Railways that were growing rapidly at the time. The Beeching cuts, or “Beeching Axe” that followed resulted in the major closures for both stations and lines. Many people has said that it may not entirely been a coincidence that while Beeching, essentially at the behest of the Government, was closing railway lines, the government was providing funding for the construction of motorways, which were being built by companies in which Ernest Marples had an interest.

When he was made Minister of Transport in 1959, Marples undertook to sell his 80% shareholding in the company Marples Ridgway and Partners, a civil engineering company that he had started with one five-ton ex-army truck and one crane, as he was now in clear breach of the House of Commons’ rules on conflicts of interest. He still owned these shared in January 1960 at which time the Evening Standard reported that Marples Ridgway had won the tender to build the Hammersmith Flyover. 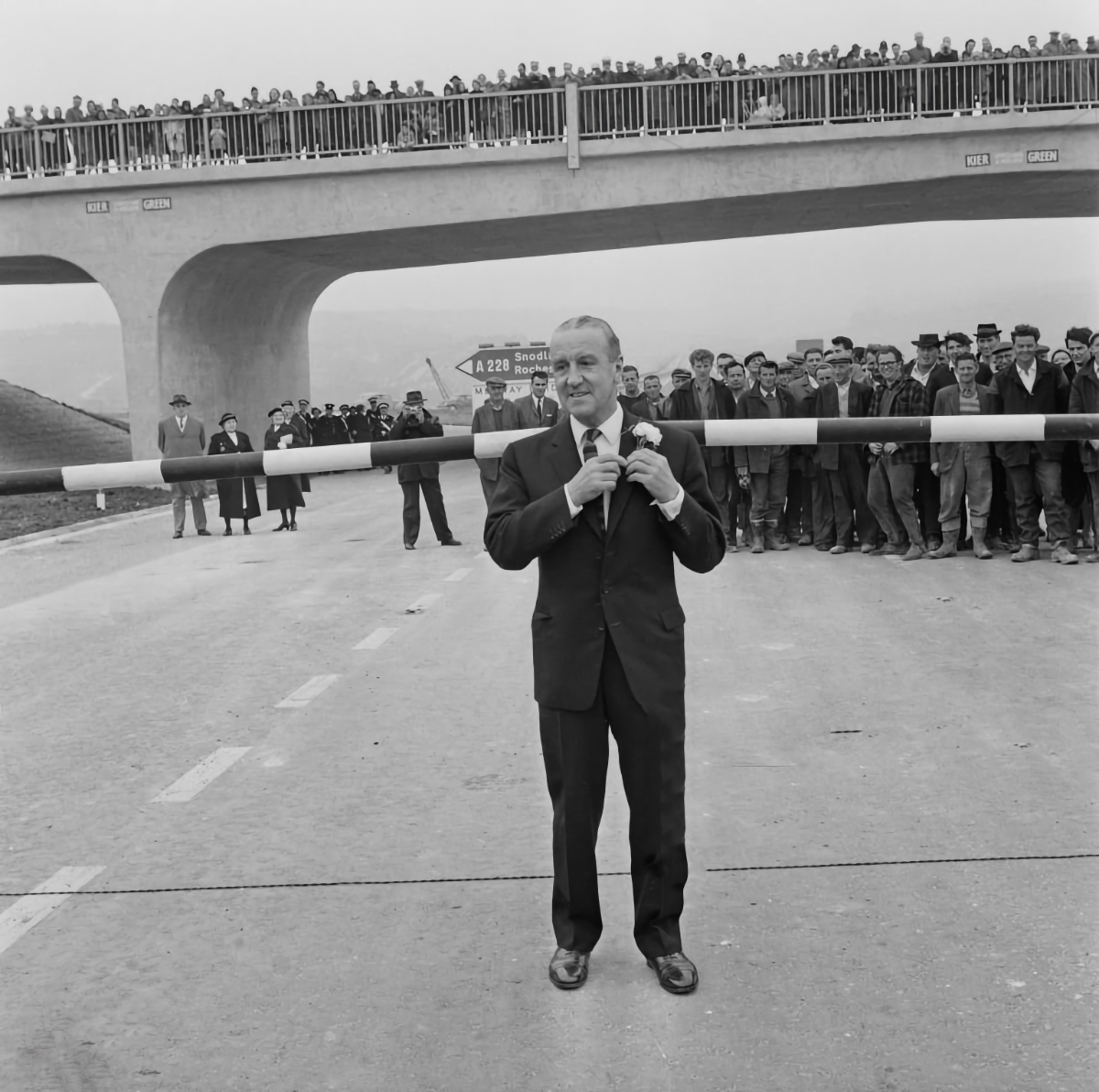 Eventually Marple sold his shares to his wife, reserving himself the possibility to reacquire them at the original price after leaving office. In 1959, shortly after becoming minister, Marples opened the first section of the M1 motorway. It was understood that although his former company was not directly contracted to build the M1, Marples Ridgway was alleged to have “certainly had a finger in the pie”. Marples Ridgway built the Hammersmith flyover in London at a cost of £1.3 million, immediately followed by building the Chiswick flyover.

This conflict of interest wasn’t the only thing in 1965 that made Marples unpopular with the upper echelons of the Conservative party after Macmillan had resigned. In 1963 Lord Denning, looking into the security aspects of the Profumo scandal and the rumoured affair between the Minister of Defence, Duncan Sandys, and the Duchess of Argyll, confirmed to Prime Minister Macmillan that the rumour that Ernest Marples was in the habit of using prostitutes, appeared to be true. Not only that he enjoyed being whipped while dressed in women’s clothing.  One of the prostitutes who had provided these services to Marples, and confirmed by her detailed knowledge of the interior of Marples’ home where the events took place. Ernest Marples’ kinky antics made Jack Profumo look like a choir boy but this was all too much for Prime Minister Macmillan who had always had a soft spot for the Transport minister. Thus the story was suppressed at the time and did not appear in Denning’s final report. 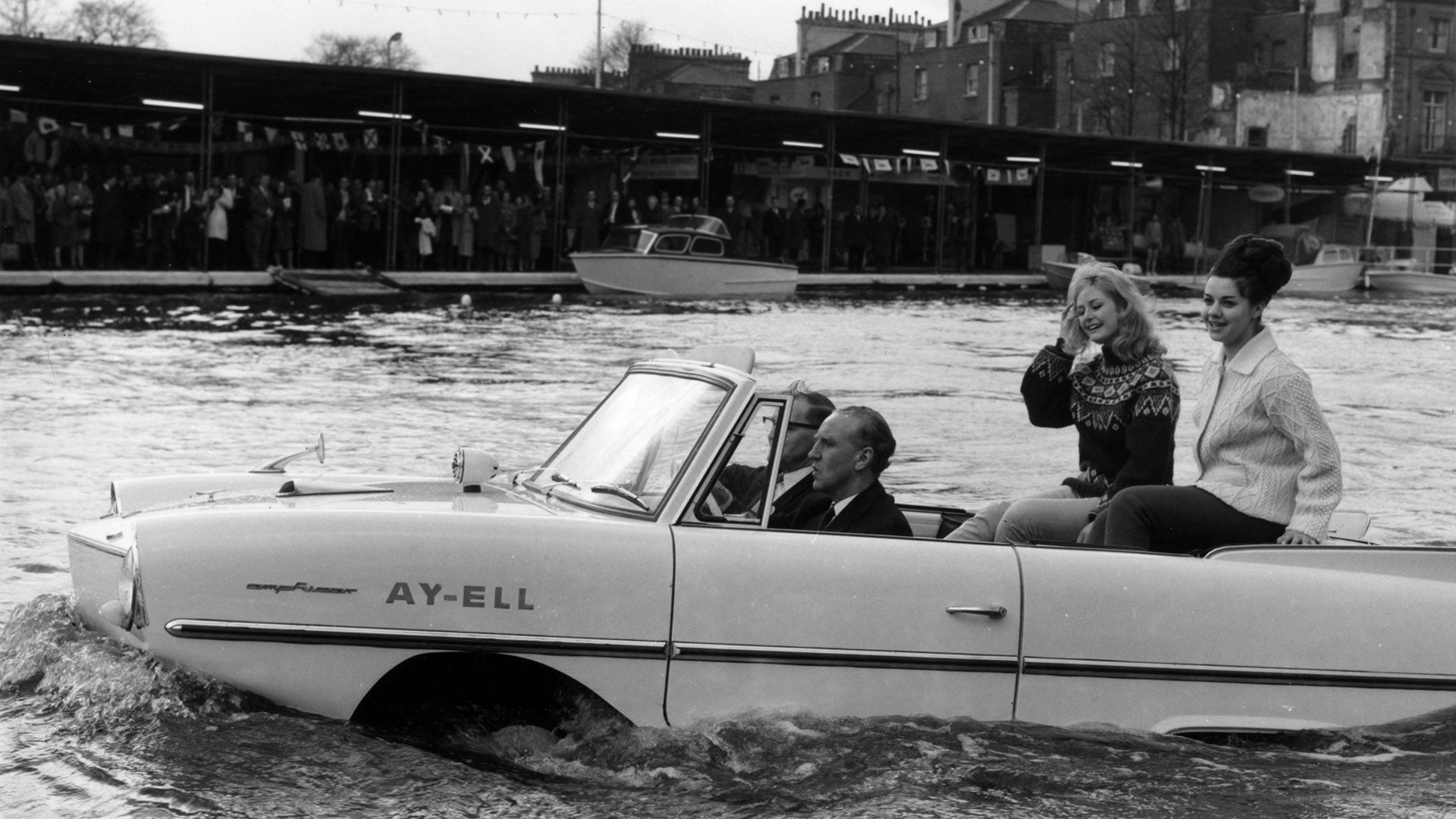 In the early 70s Marples, just before the tax year of 1975, left the UK by the night ferry with his belongings crammed into tea chests, leaving the floors of his home in Belgravia littered with discarded clothes and possessions. He claimed he had been asked to pay nearly 30 years’ overdue tax and couldn’t afford to live in Britain.

Marples’s final years were spent on his 45-acre vineyard estate in Fleurie, France. He died in a Monte Carlo hospital on 6 July 1978. 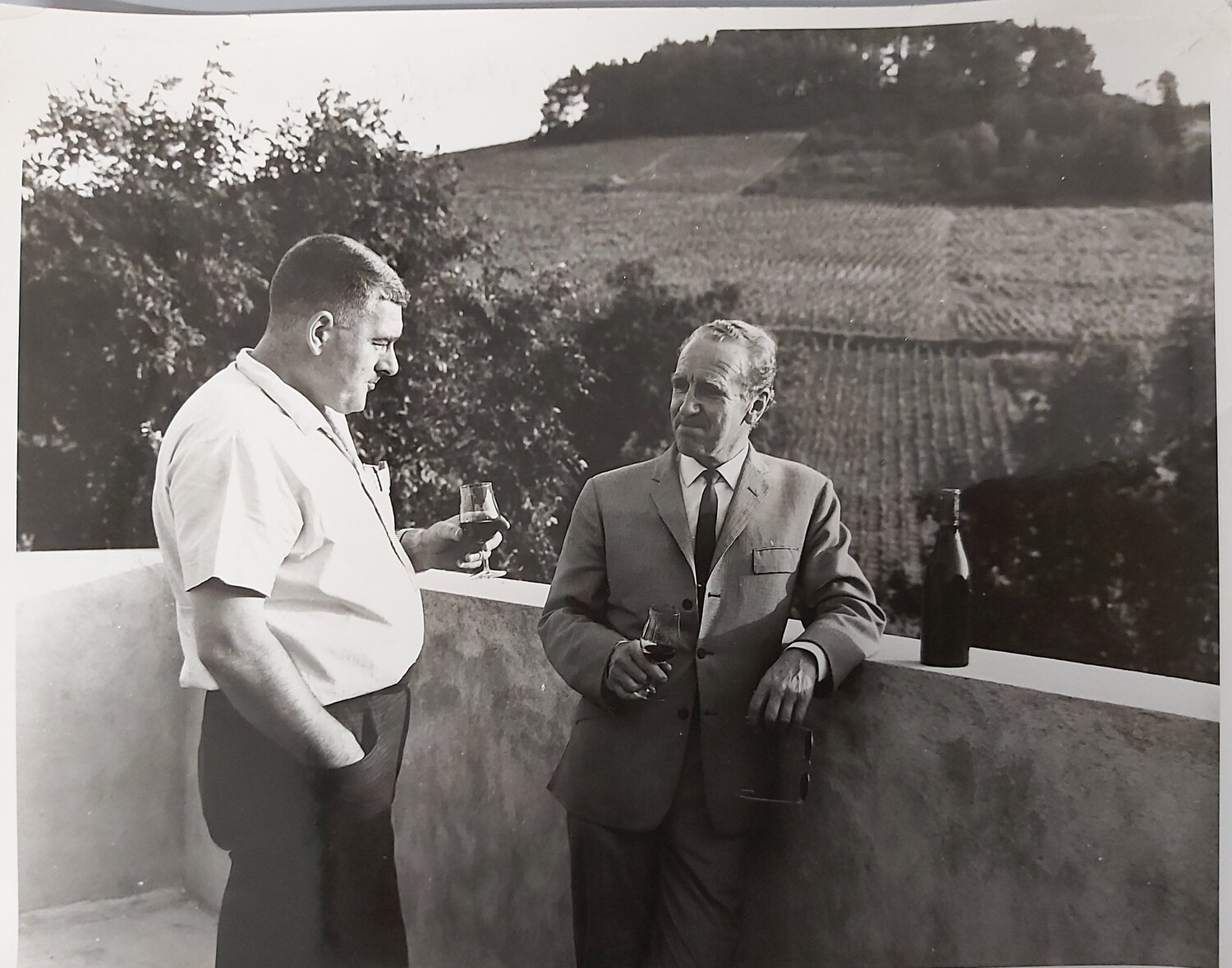