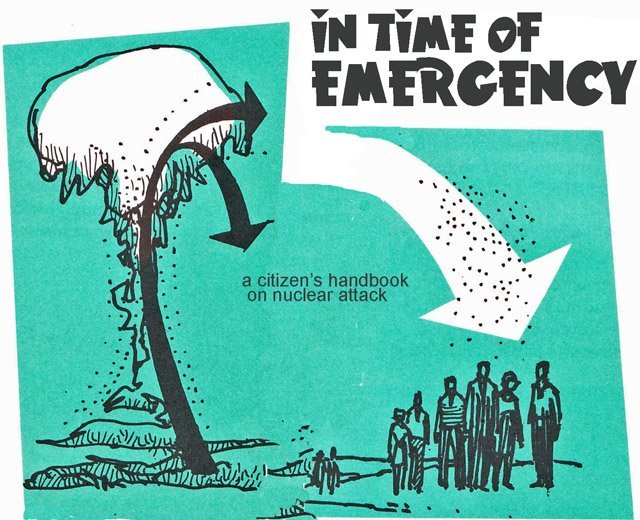 The Cold War scare of nuclear annihilation probably was at its zenith during the 1950s and 60s; however, the threat of mass extinction lingered well into the 80s (anyone remember “The Day After”?). One could also make an argument that we are no less safe today.

Yet, in terms of pure, unadulterated terror from nuclear annihilation, you just can’t beat the 1950s and 60s.  This is when people bought fallout shelters and schools had regular drills on A-bomb survival.     Lots of government educational material was released to the public during this time, often depicting mass extinctions, skies ablaze from mushroom clouds, and sad, dead-eyed survivors living off a scorched and barren earth.

The following are pages from a booklet published by The Department of Defense, Office of Civil Defense in 1968 called “In Time of Emergency: A Citizen’s Handbook on Nuclear Attack, National Disasters”. The “natural disasters” portion gets lip service; nine tenths of this handbook is about The Big One – nuclear attack. 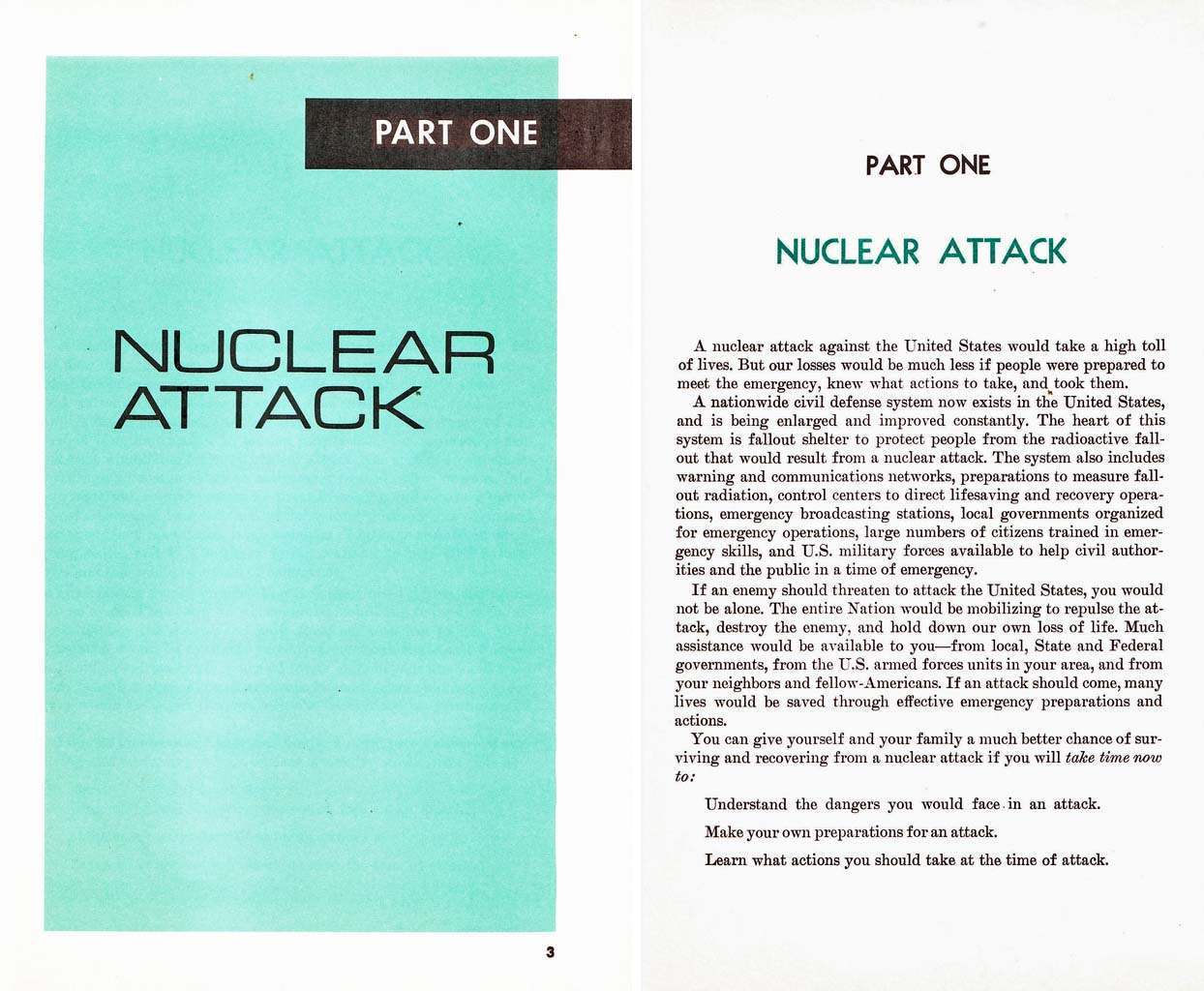 “A nuclear attack against the United States would take a high toll of lives. But our losses would be much less if people were prepared to meet the emergency, knew what actions to take, and, took them.”

“If an enemy should threaten to attack the United States, you would not be alone. The entire Nation would be mobilizing to repulse the attack, destroy the enemy, and hold down our own loss of life.” 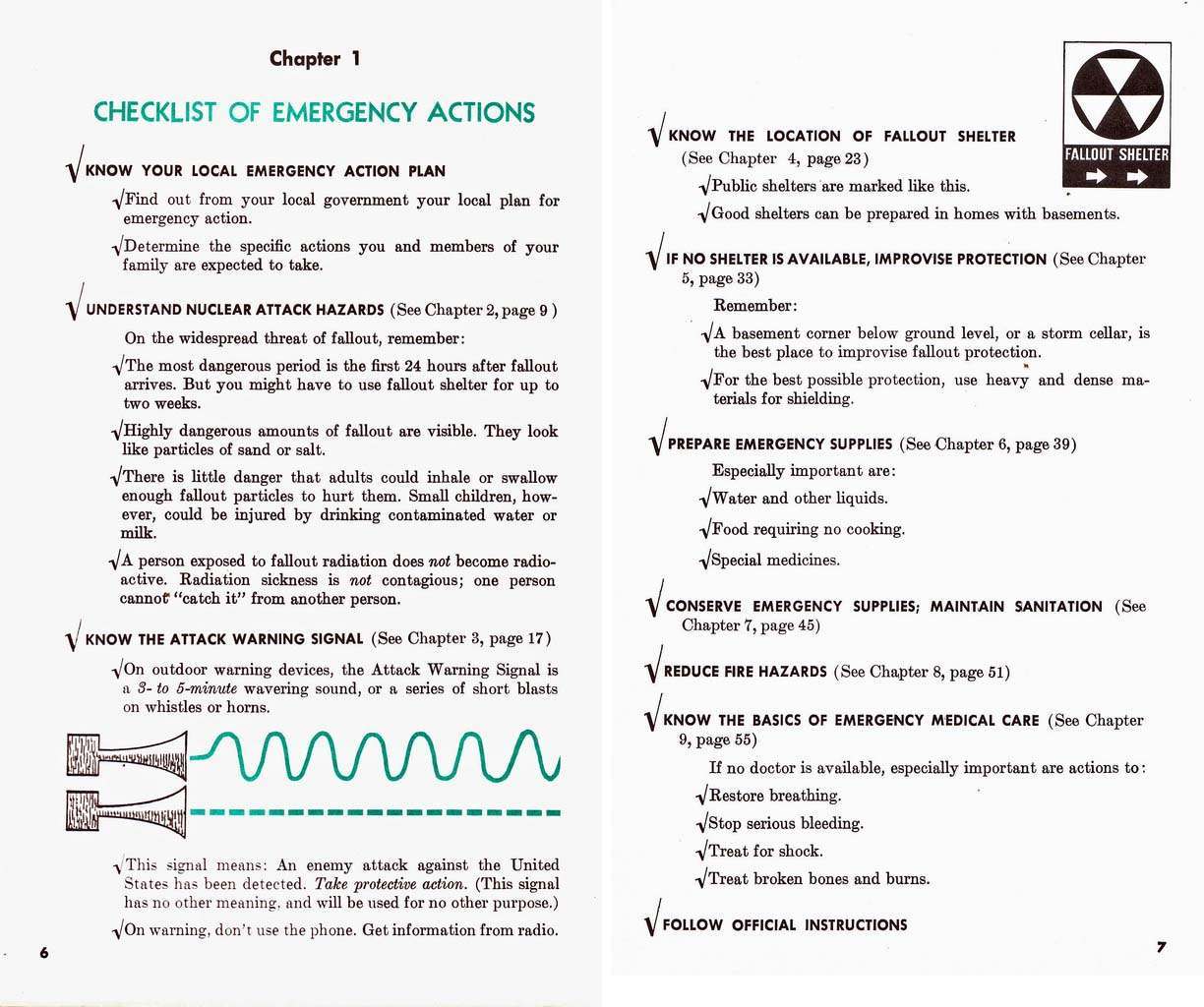 “The most dangerous period is the first 24 hours after fallout arrives.  But you might have to use fallout shelter for up to two weeks.”

“There is little danger that adults could inhale or swallow enough fallout particles to hurt them. Small children, however, could be injured by drinking contaminated water or milk.” 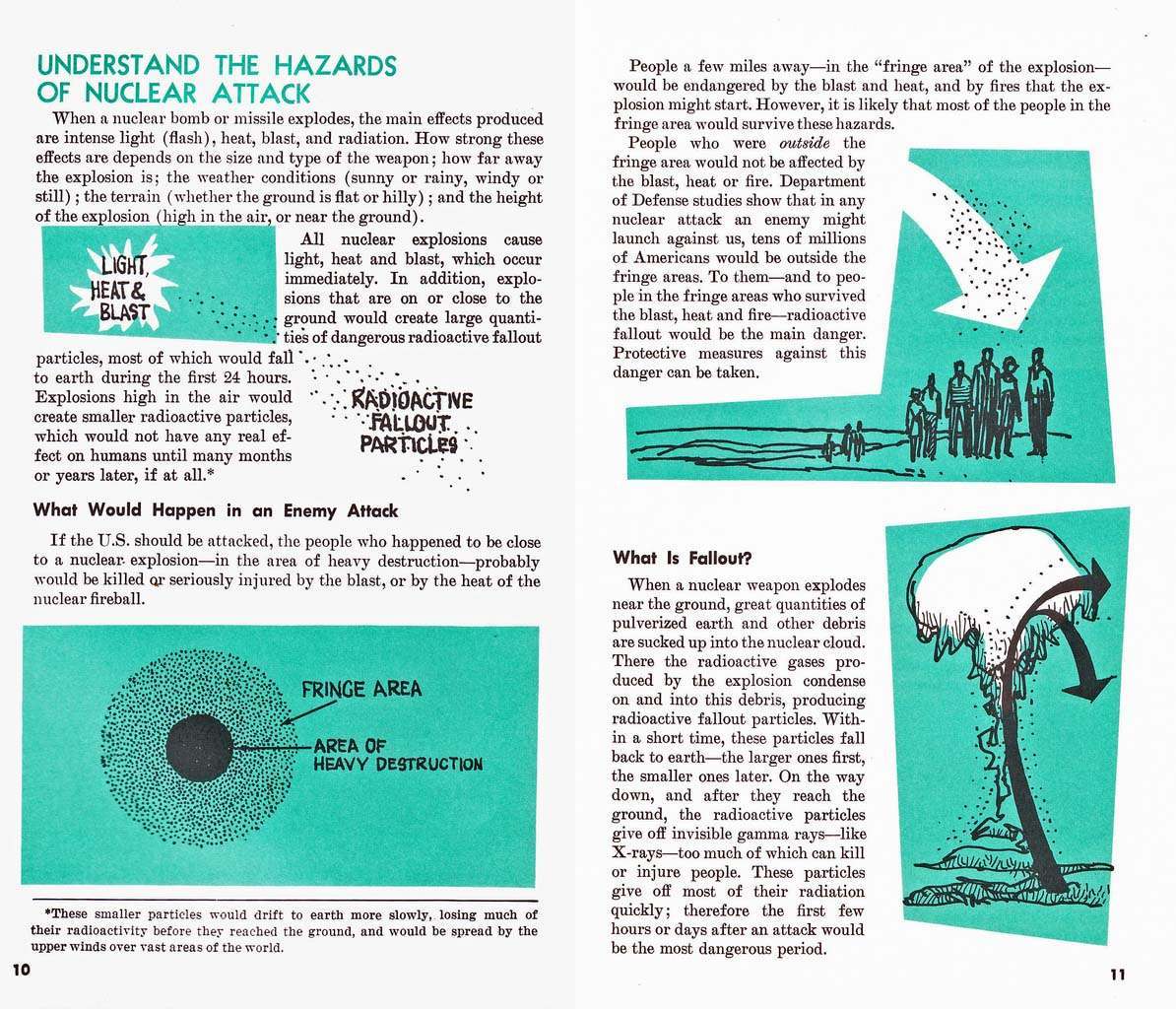 “If the U.S. should be att acked, the people who happened to be close to a nuclear. explosion-in the area of heavy destruction-probably would be killed or seriously injured by the blast, or by the heat of the nuclear fireball.”

If I were to write a handbook on nuclear attack it would only be one page long and have only two instructions: 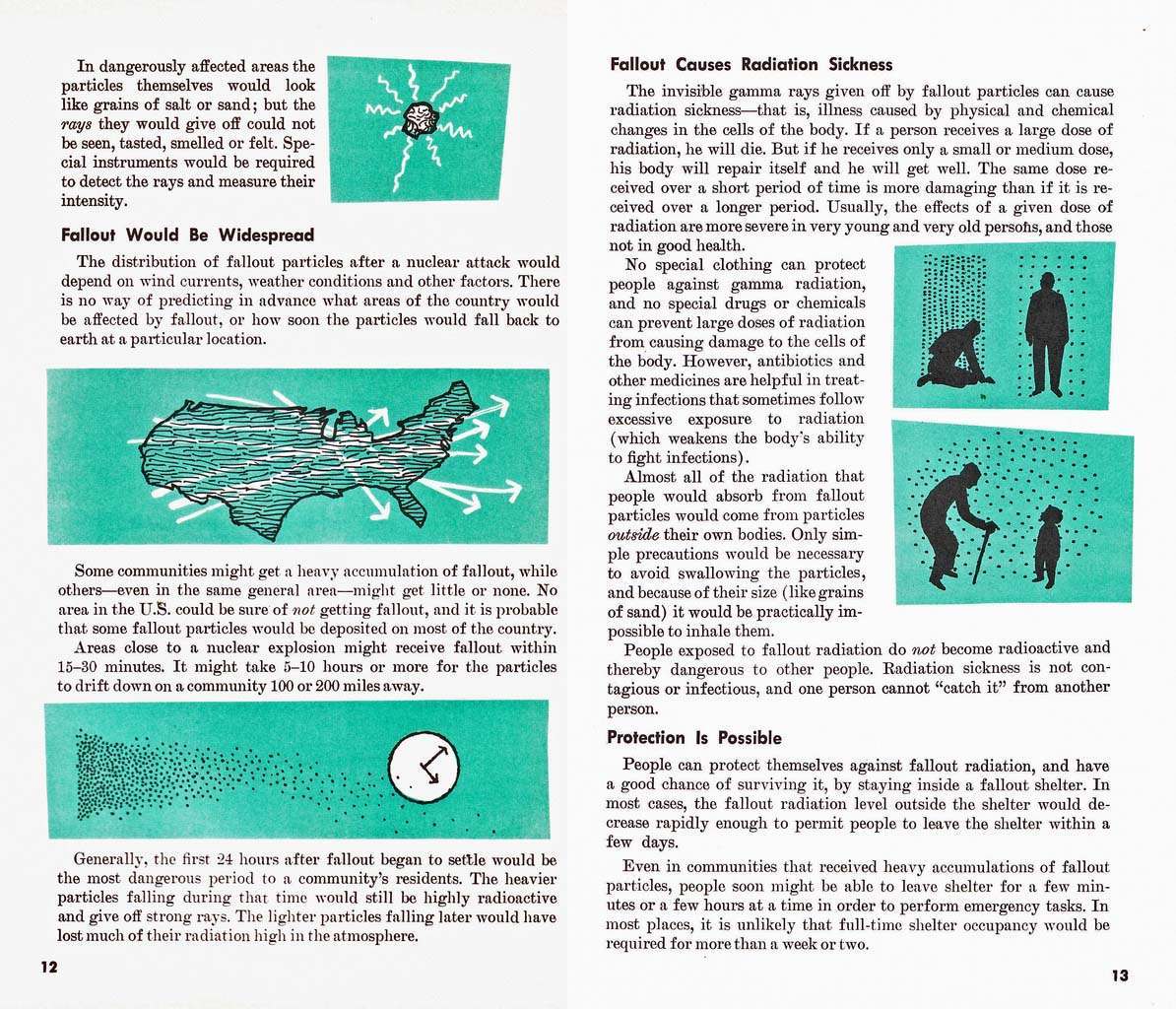 “Some communities might get a heavy accumulation of fallout, while others-even in the same general area-might get little or none. No area in the U.S. could be sure of 110t getting fallout, and it is probable that some fallout particles would be deposited on most of the country.”

Please note that Glenn Beck is currently selling a backpack that will help you survive the Apocalypse. Of course, it comes complete with a couple of his bestselling books…… to read, I guess, while the Earth is turned to ashes.

“I£ a person receives a large dose o£ radiation, he will die.  But i£ he receives only a small or medium dose, his body will repair itself and he will get well.”

You have to wonder how much of this is true, how much is BS, and how much is pure ignorance. Funny there’s no mention of high doses of gamma radiation causing you to turn into a green monster with super strength. 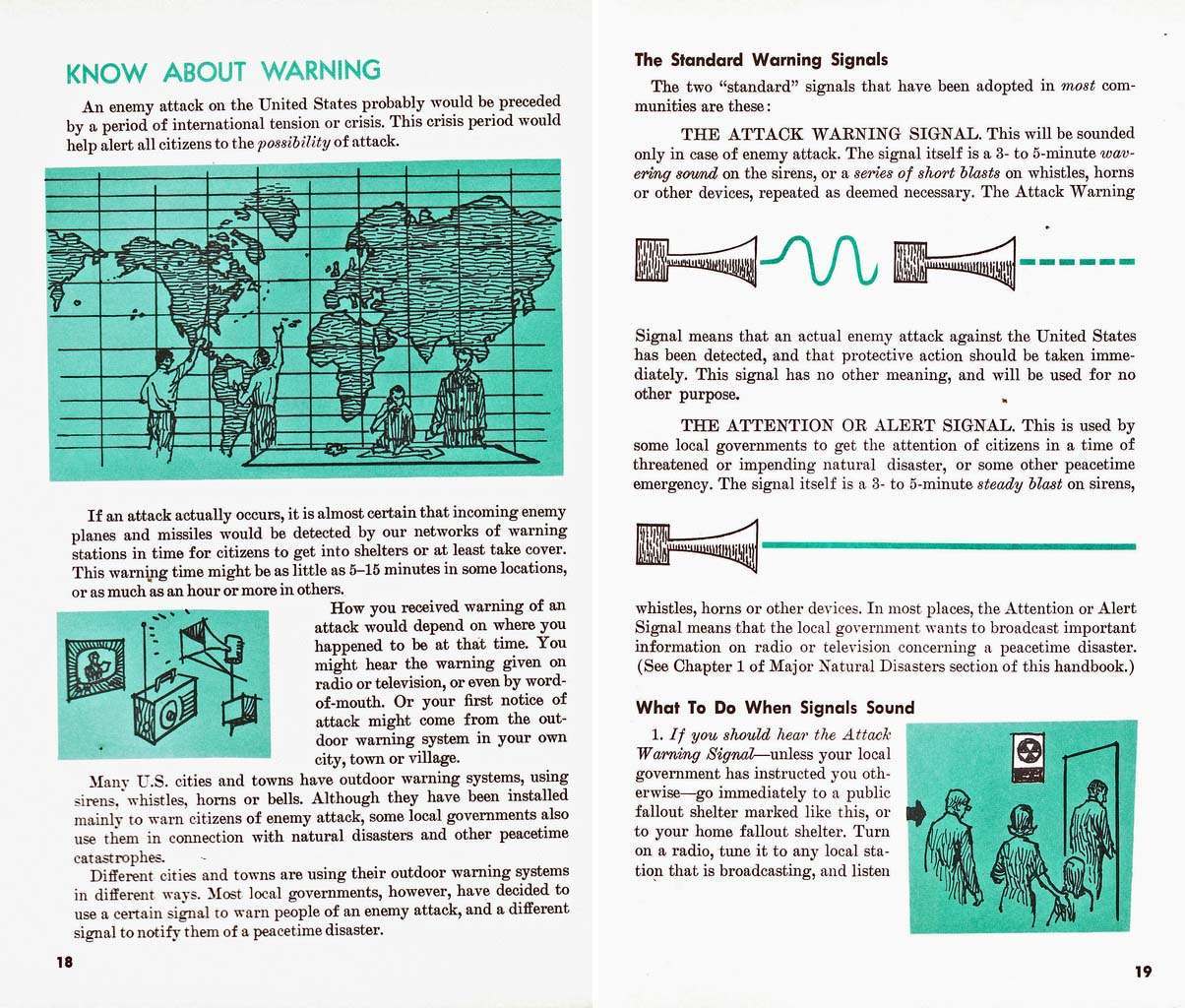 “If an attack actually occurs, it is almost certain that incoming enemy planes and missiles would be detected by our networks of warning stations in time for citizens to get into shelters or at least take cover.”

So, the warning siren will give us ample time to cry like babies, find religion, and curl up into the fetal position. 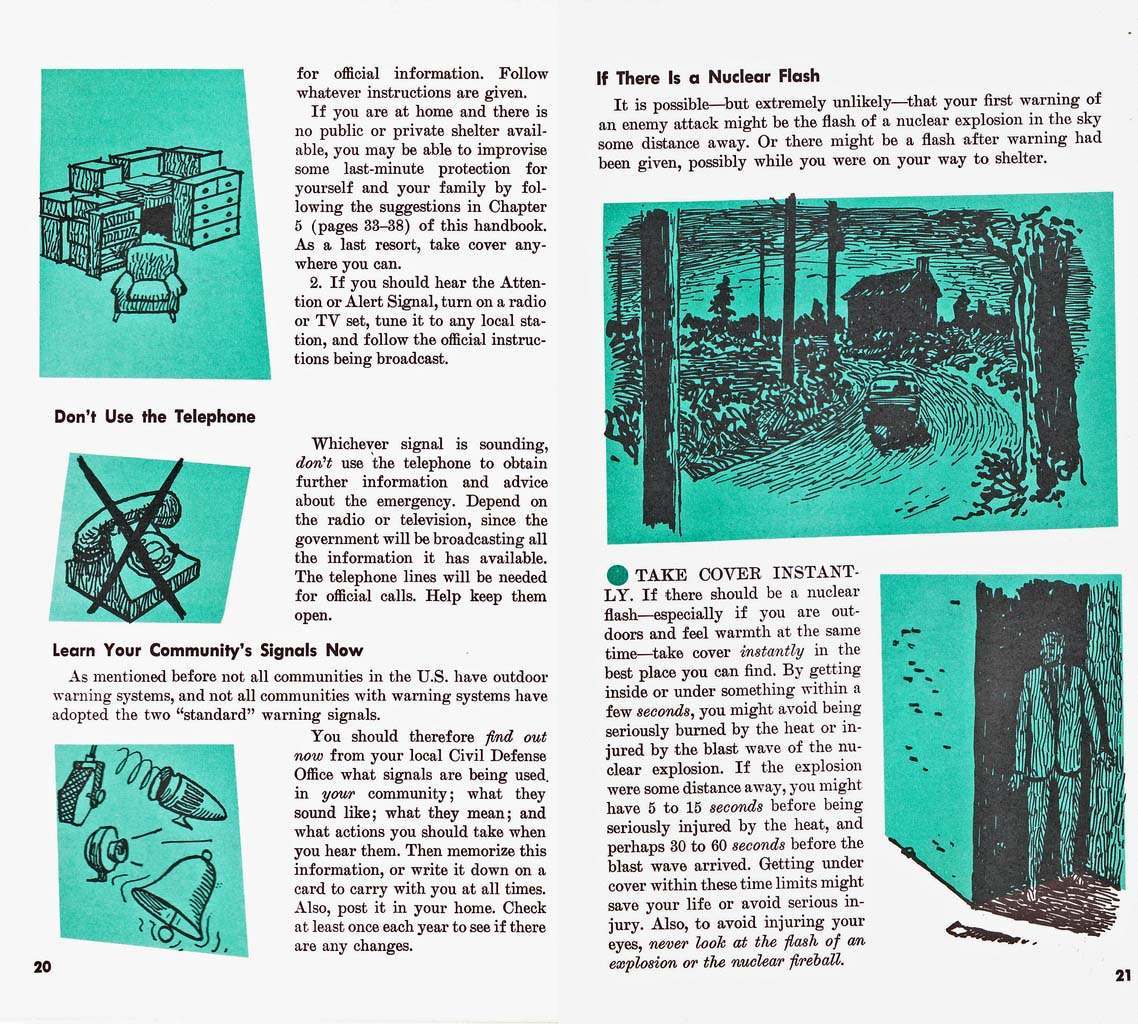 “Whichever signal is sounding, don’t use the telephone to obtain further information and advice about the emergency. Depend on the radio or television, since the government will be broadcasting all the information it has available. The telephone lines will be needed for official calls. Help keep them open.”

And no selfies in front of the mushroom cloud.  And no texting while bursting into flames.

“Also, to avoid injuring your eyes, never look at the flash of an explosion or the nuclear fireball.”

Imagine being told by your 4th grade teacher to be sure to not look at the nuclear fireball. There’s no way you can convince me that this didn’t affect the minds of a generation. Not to mention that one impending doom was to be followed by another – Vietnam. It seems the shadow of death on a massive scale was forever on the horizon for the Baby Boomers.

Take a look at the depiction of man in the page below…. this is the very essence of despair and fear. But it’s not in a painting by Goya or Bosch….. but a pamphlet by your friendly neighborhood Department of Defense. 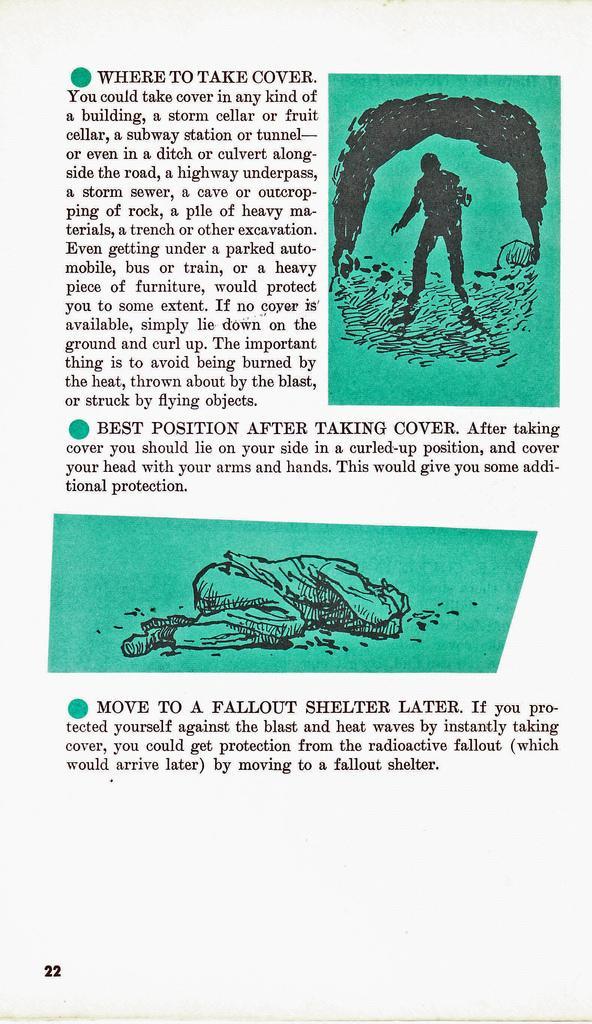