One of the most commented on moments in Mad Men is the Draper family picnic scene (seen below).  At the end of their waterside lunch on the grass, they fold up their tablecloth and basically leave a trashcan load of garbage to posterity.  Viewers were horrified – did people really do that?  We have been so indoctrinated with an anti-pollution ethic, that we can’t comprehend that normal, respectable people would actually do this.  Yet, it happened – and it was common. 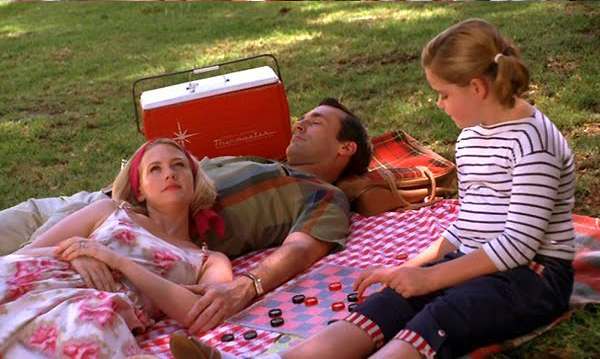 In the 1960s and early 70s, it was routine to finish your can of soda and just toss it out the window of your car.  We didn’t think twice about dropping that cigarette butt wherever we pleased.  And as far as restrictions on waste disposal for factories were concerned, it was the Wild West. Watch the intro to “Welcome Back, Kotter” or check out any movie set in New York during the early to mid-1970s – the place was freaking filthy.  Sadly, by the mid-70s, this casual pollution had finally started to catch up to us. Our population had exploded, yet the same dirty habits were in place.  Things were getting ugly, and something had to happen.

1. The Hippies Take Over 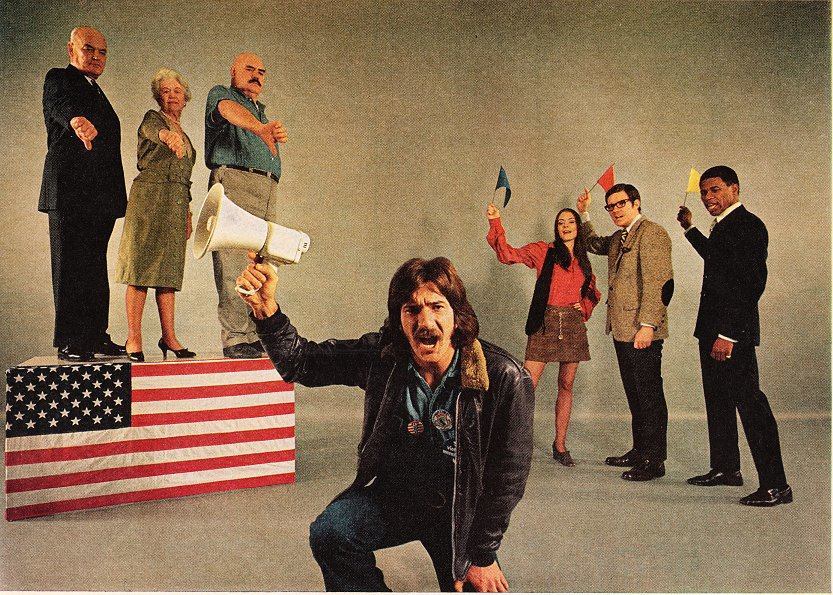 Fortunately, something did happen.  The counter-culture movement brought with it not only free love and groovy music, it brought an awareness of nature that simply wasn’t part of the previous generations’ genetic makeup.  Indeed, when had Americans EVER cared about the environment prior to this moment?  Mankind had always more or less plundered the earth without regard because the population wasn’t big enough to bring lasting devastation.  Sure, we’d basically wiped out the buffalo and most of the old-growth forests, but at least we weren’t knee-deep in Budweiser cans and McDonald’s wrappers.

Once these Baby Boomers started voting and entering the economy, the novel idea of environmental awareness suddenly mattered.  Subsequently, a lot of legislation was passed and organizations formed, but we’ll refrain from elaborating on this point.  Suffice it to say, the tree hugging counter-culture of the late 60s which had been derided and mocked by the “establishment” now had become deeply woven into academic and political institutions.  Indeed, the hippies had the last laugh, and their message was: pollution is now officially “bad”. 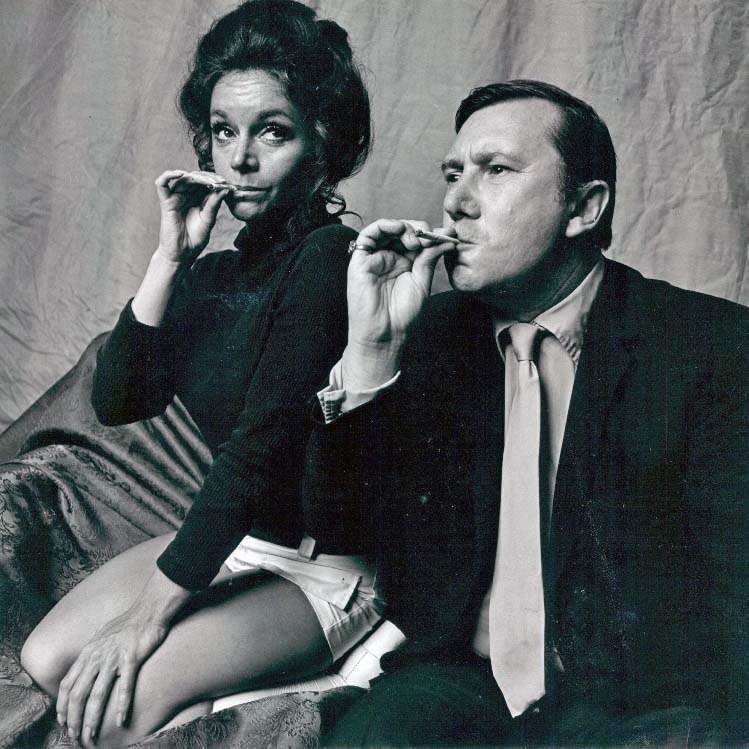 Ashtrays were everywhere, yet cigarettes were strewn over seemingly every square inch of land.  Just try and find a sidewalk crack in the 1970s without a handful of wedged cigarette butts.  The combination of (1) no stigma attached to dropping your cigarette butt wherever you pleased and (2) a hell of a lot more Americans smoking resulted in the US landscape rapidly becoming a giant ashtray. 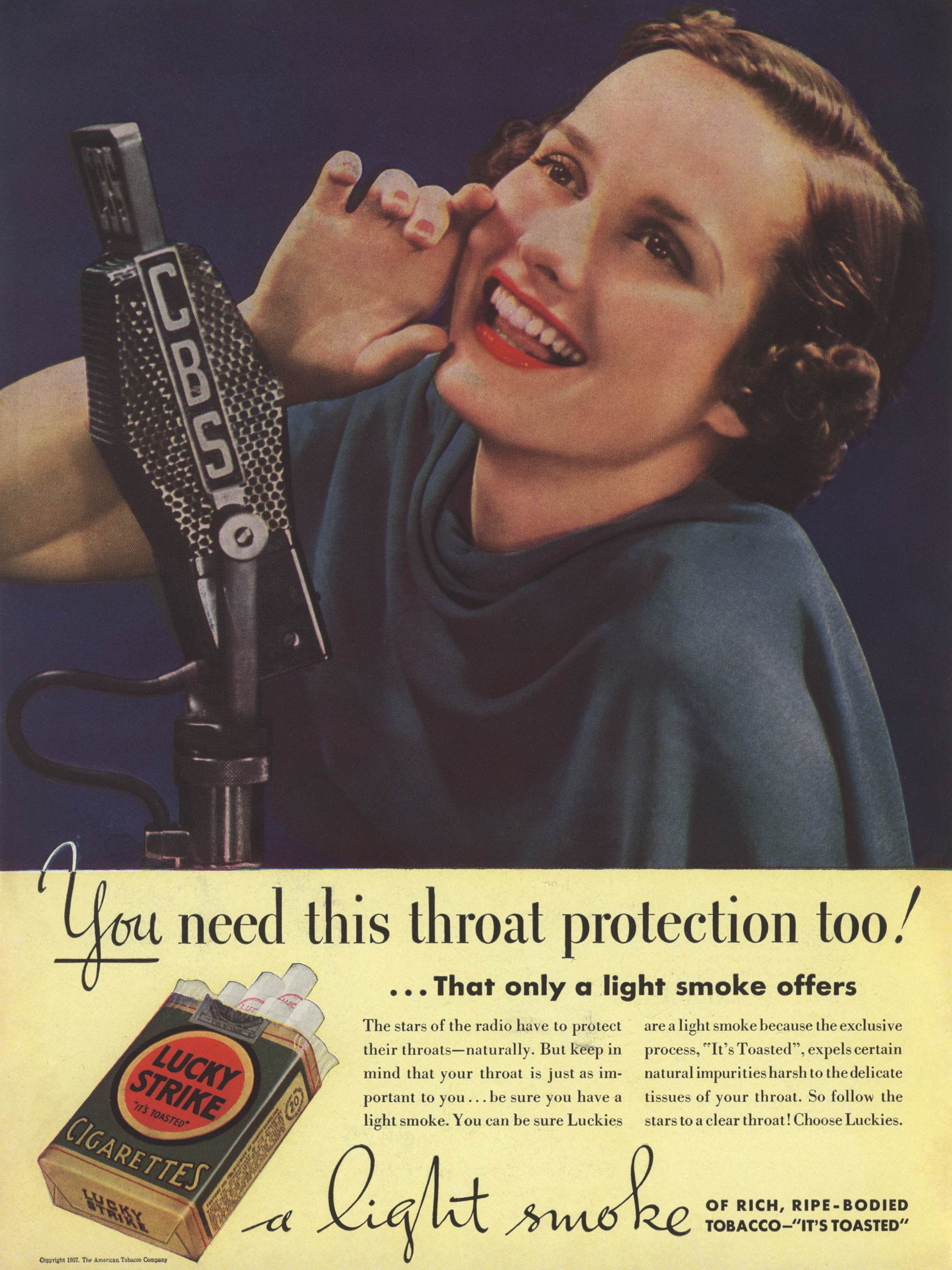 In the 1960s, advertisements depicted medical professionals endorsing cigarettes.  Cartons of smokes were laid beneath Christmas trees.  Cancer sticks were peddled by cartoon characters.  Worst of all, there simply was no escape from it with smoking being allowed everywhere and anywhere (even hospitals and airplanes).  Thus, what you ended up with was a layer of cigarette butt topsoil  everywhere you looked.

By the mid-1970s, the dangers of smoking had finally broken through the wall of Madison Avenue propaganda.  Plus, for the first time, there was a stigma attached to flicking your butts hither and yon.

While children of the 50s (the Boomers) were indoctrinated with all kinds of pro-America, pro nuclear family values, kids of the 1970s had their own brand of indoctrination.  Suddenly, topics on multiculturalism and gender equality made their way to the classrooms for the first time.  Among the new philosophies: environmental awareness, and the face of it was a big-ass owl. 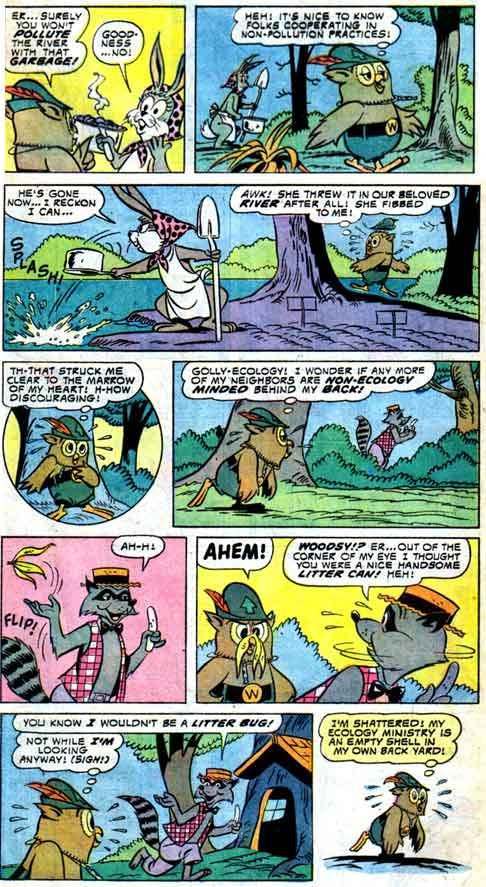 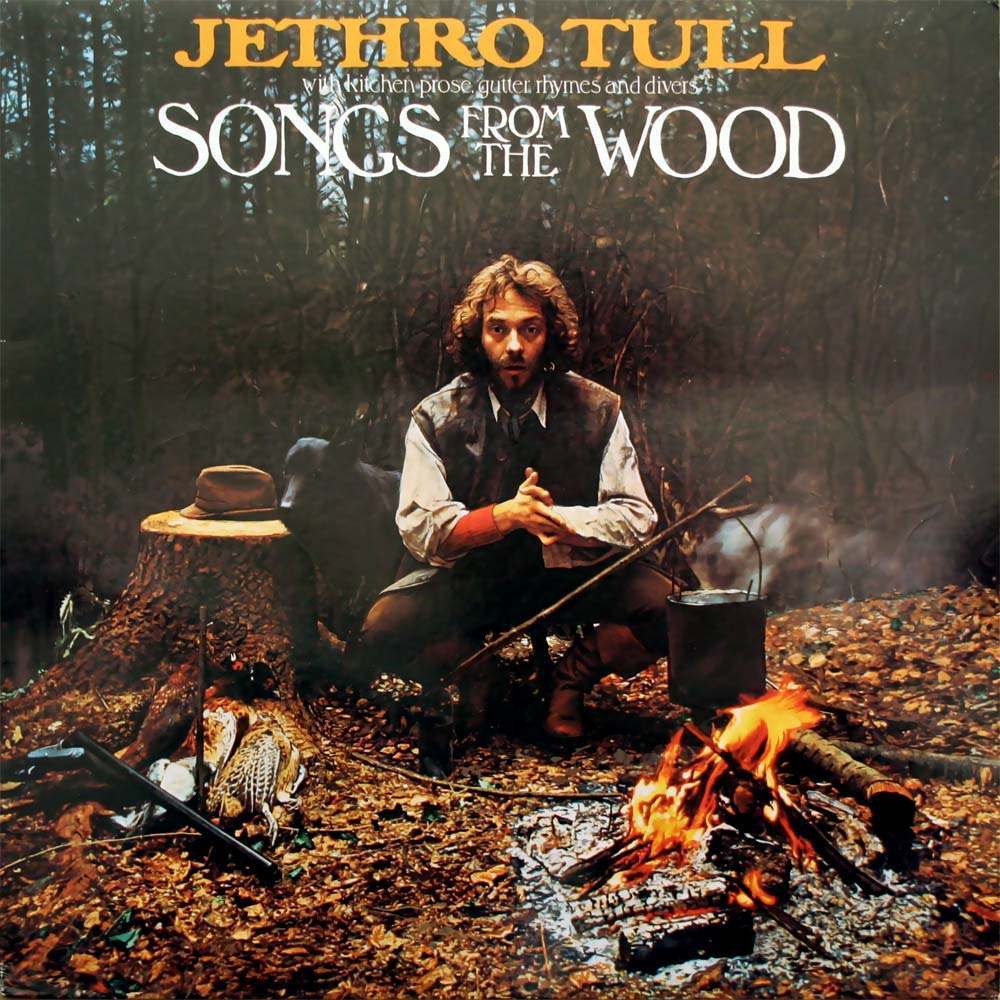 Good luck trying to find a pro-environment song from the 1950s .  It wasn’t until the last few years of the 60s that musicians began their love affair with Mother Earth.  Bands such as Jethro Tull and The Kinks found themselves abandoning the Industrial Revolution and retreating deep into the woods.

Jack, do you never sleep
does the green still run deep in your heart?
Or will these changing times,
motorways, powerlines,
keep us apart?
Well, I don’t think so
I saw some grass growing through the pavements today…

You’ll notice that TONS of album covers during this period featured rustic, bucolic scenes.  Sure, they all abandoned the fad well before the 1980s rolled around, but for a while it seemed every musician was hugging a tree on their album covers… 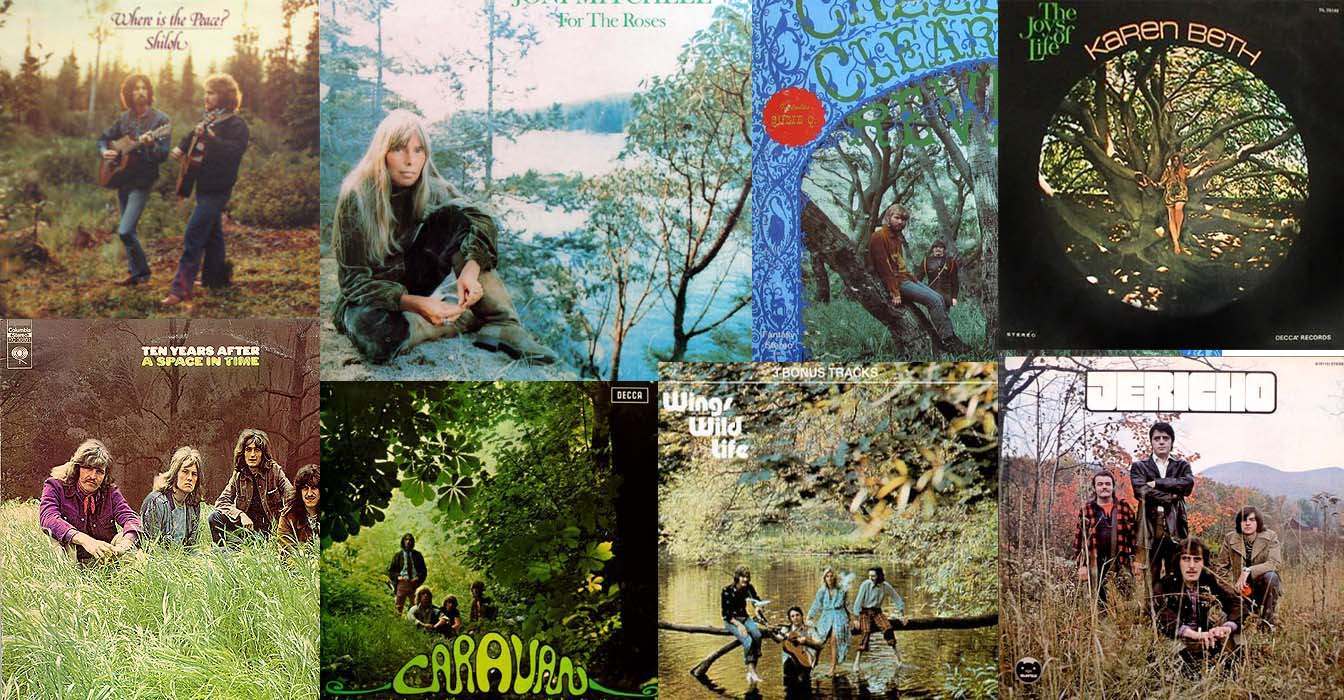 Of course, all this pro-environment and anti-industrialism among rock stars inevitably makes its way to the fans.  So, while the gradeschool set had Woodsy Owl telling them it was a Cardinal Sin to discard a Dentyne wrapper on the playground, they older crowd had Joni Mitchell and John Denver telling them a similar message.  It was now officially ‘uncool’ to pollute.

My personal favorite anti-pollution song of the 1970s is “There Won’t Be No Country Music” by C.W. McCall – the truck drivin’ man that brought us “Convoy”.  In the song, CW paints a picture of absolute Armageddon.

Well, it’s only gonna be about an hour, friend
‘Til they dam your favorite river
So you can water-ski just one more reservoir
And them supersonic ships are gonna take you
‘Cross a sea of pavement
To one more faceless brickyard on the shore….

Well, it’s only gonna take about a minute or so
‘Til the junkyards fell the prairies, boy
And them smokin’ yellow grass fires start to burn
And the warnings on them beer cans
Gonna be buried in them landfills

No deposit, no sad songs, and no returns
Yeah, it’s only gonna take about a minute or so
‘Til the factories blot the sun out
You gonna have to turn your lights on just to see
And them lights are gonna be neon, sayin’
“Fly Our Jets To Paradise”
And the whole damn world is gonna be made of styrene

And it’s only gonna be about an eye-blink, boy
‘Til they pull out the wool to blind us
So we just can’t read all the messages on the wall
But the only words that matter
Oughta be scribbled all over them billboards
In big old black and bloody letters, ten feet tall

5. A Lifetime of Guilt via Iron Eyes Cody

Last but not least is the crying chief in the “Keep America Beautiful” public service announcement.  Yes, the actor was 100% Italian, but we didn’t know that, and this message struck a chord among Americans.  The sight of this Native American weeping silently among the refuse that the White Man has brought to his pristine land was powerful.  Today we can mock it for being cheesy, or deride it because of its oversimplification and sensationalism, but the bottom line is that it was profoundly effective.

Why was it so effective?  Why do Gen Exers still remember this commercial so vividly?  Perhaps all the guilt accumulated from the classroom and media was just waiting to explode, and this was the trigger.  Whatever the case, you definitely thought twice before discarding that Twinkie wrapper on the ground…. The haunting image of Iron Eyes was watching you.