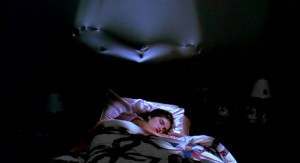 Beginning in 1984, the Nightmare on Elm Street films ruled the box office, and the horror genre too. Wes Craven created a timeless demon in crone-like Freddy Krueger (Robert Englund), the ultimate “bad father” and a bogeyman who would visit the sins of the fathers upon the children.  The original film series stretched from 1984 to 1991, and Wes Craven himself re-booted the monster with a darker tint in 1994’s New Nightmare.

Freddy was and remains terrifying for many reasons.  First and foremost, Freddy was in total command of the dream world, a realm that we all have to visit sooner or later, lest we lose our minds.  None of us can avoid sleep for long.

But Freddy was also scary because he served as a reflection of that universal quality of teen angst, from drug use in the “just say no” Reagan years, to body image worries and anxieties about eating disorders. 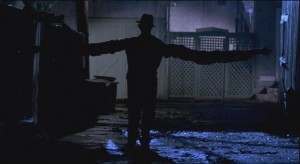 The key to Freddy’s particular brand of horror was that he was — after a fashion — a kind of nasty therapist, forcing his victims to face their deepest insecurities before, finally, murdering them in terrible fashion.  Whatever psychological foible Freddy found in those whose dreams he stalked, he ruthlessly and colorfully exploited. And the special effects masters brought those phantasms to vivid, incredible life.

Freddy did not play favorites, either, or act in a politically-correct fashion. His best and most memorable kills in the series are those that, to some extent, contend with topics that the mainstream culture simply didn’t want to discuss, either then or now.

Kill a helpless, handicapped kid in a wheelchair?  Check.

In short, Freddy never feared to go to the dark places of the human psyche, and the five best “kills” in the series reflect that key aspect of the franchise.

This is a fun death from the second sequel, showcasing again what a bastard (son of a hundred maniacs…) Krueger really is. Here, he torments a sweet kid named Will (Ira Heiden), who in real life is handicapped, and also wheel-chair bound.  The scene starts with Freddy telling Will that “it’s the chair” for him, and then a wheelchair with a mind of its own tries to run the boy down.  The very tool that enables him to lead a normal life becomes an instrument in demise.  That’s really wicked.

Then, Will focuses and uses his dream power — as a Dungeons and Dragons wizard — and blasts the hell out of Freddy. After a brief triumph, however, Freddy spears him, telling him that he doesn’t “believe in fairy tales.”

This scene is so great because it reveals what a cruel bully Freddy can be, both taunting a kid in a wheel-chair, and going so far as to toy with Wil so that he thinks he’s going to win.  Then, with a delicious bon mot, Freddy gives the kid the finger knives to the gut.

4. “What a rush!” A Nightmare on Elm Street III: Dream Warriors

Here, ex junkie Taryn (Jennifer Rubin) confronts Freddy in her dream, in a dark city alley at night. Freddy welcomes her “home” (to the street) and then notes that since he is  a manifestation of death, she is, or should be, well-acquainted with him. He refers, specifically, to her self-destructive history as a junkie.

And when Freddy’s finger-knives jut into the frame, the blades are now transformed to hypodermic needles.  “Let’s get high,” he suggests, and then the heroin tracks on Taryn’s arms start opening and closing like tiny mouths, hungry for the fix.  Freddy jams the needles into Taryn’s arms, killing her with an overdose.

Finally, he quips “what a rush.”

Again, this particular murder showcases perfectly the manner in which Freddy uses the psychological foibles of his victims against them.  Taryn is no stranger to death, in the form of the drug abuse that nearly killed her.  And Freddy uses that personal experience to finish the job.

As a side-note, when I saw this scene in theaters, the audience shrieked with a combination of delight and horror at those little puckering track-marks on Taryn’s arm, a physical, fleshy manifestation of addiction.

In the fifth Elm Street movie — an underrated effort that attempts to re-cast Freddy as a figure of fright instead of a figure of macabre fun — one teenager, Greta (Erika Anderson), is obsessed with her weight because she hopes to become a model.

The screenplay establishes that Greta has bulimia and possibly anorexia, and in the dream world, she finds herself the head of a dinner table when Freddy — dressed as a chef — force feeds her to death.

As Freddy stuffs Greta like a Thanksgiving turkey, those around the table, including Greta’s Mom, laugh at her predicament. In real life, Greta’s mom is the one who encourages Greta to starve herself, and so her “dream appearance” reflects her unwillingness to help her daughter overcome her condition. In fact, Mom stands to benefit if Greta starves herself and gets a lucrative modeling contract.  Dark, huh?

There are two kinds of kills or death scenes in the Elm Street franchise. There are those that are fanciful, outward manifestations of teen psychology or angst.  These appear in the later sequels, primarily.

The other kind appears in the first film, from Craven himself, and are unbelievably effective.  These murders are brutal and bloody beyond any reckoning, and  simultaneously a violation of physical laws.

Here, Freddy kills Nancy’s (Heather Langenkamp) boyfriend, Glen (Johnny Depp) in his own bed, shredding him and causing a massive ejaculation of blood to flood the room and the ceiling.  Glen gets murdered listening to WKRGR (Krueger) on the radio, but the importance of this scene is, perhaps, the underlying symbolism.  Freddy replaces Glen — who throughout the film has longed for a more sexual relationship with Nancy — and courts her in his own gruesome fashion.

After Glen is shredded, and his blood creams the ceiling, Nancy gets a phone call, and a tongue-bath from Freddy.  “I’m your boyfriend now,” Freddy says, suggesting a relationship much more permanent than the one Nancy shared with Glen.

1.“This is God” A Nightmare on Elm Street

The greatest and most memorable kill in all the Nightmare on Elm Street films occurs early in the Craven film. Tina (Amanda Wyss), who seems like our lead character at this juncture (like Janet Leigh in Psycho [1960]) falls asleep after having sex with her “juvenile delinquent” boyfriend, Rod (Nick Corri).

Tina dreams of Freddy, and the dream demon plays with her awhile before killing her.  His arms stretch menacingly across an alleyway. He chops off his fingers, and the stumps sprout green, goopy blood.  “This is God,” he quips, referring to his finger-knives.

Tina makes it back to her bed, but Freddy is there, and slices her open with one brutal swipe. At that point, the film’s perspective changes, and Rod watches as an invisible force lifts Tina into the air, and forces her to the ceiling, blood everywhere. Here Freddy is an unseen force violating our reality.

This death scene is brilliant because it offs a character we care about and are invested in, but also because it establishes visually the breadth of Freddy’s powers. When he kills us in our dreams, the real world is affected too.  More than any scene in any Elm Street film, this death scene viscerally establishes the menace and terror of Freddy Krueger.

Also, as the “bad father,” there is a Freudian undercurrent or symbolism here. Freddy shows up to punish the wayward daughter, who has made love to her illicit boyfriend in her mother’s bed.

In the 1980s, vice always precedes slice-and-dice, and that’s the case here too, in the most unforgettable death scene of the Elm Street cycle.