In 1960s and 70s Britain there was arguably no toy more masculine than Palitoy’s Action Man (Hasbro’s GI Joe in the US). Launched in 1966, Action Man was unequivocally a man of war and the first figures (not “dolls”, as we perhaps too frequently felt compelled to clarify, if only to ourselves) were the Action Soldier, Action Sailor and Action Pilot. 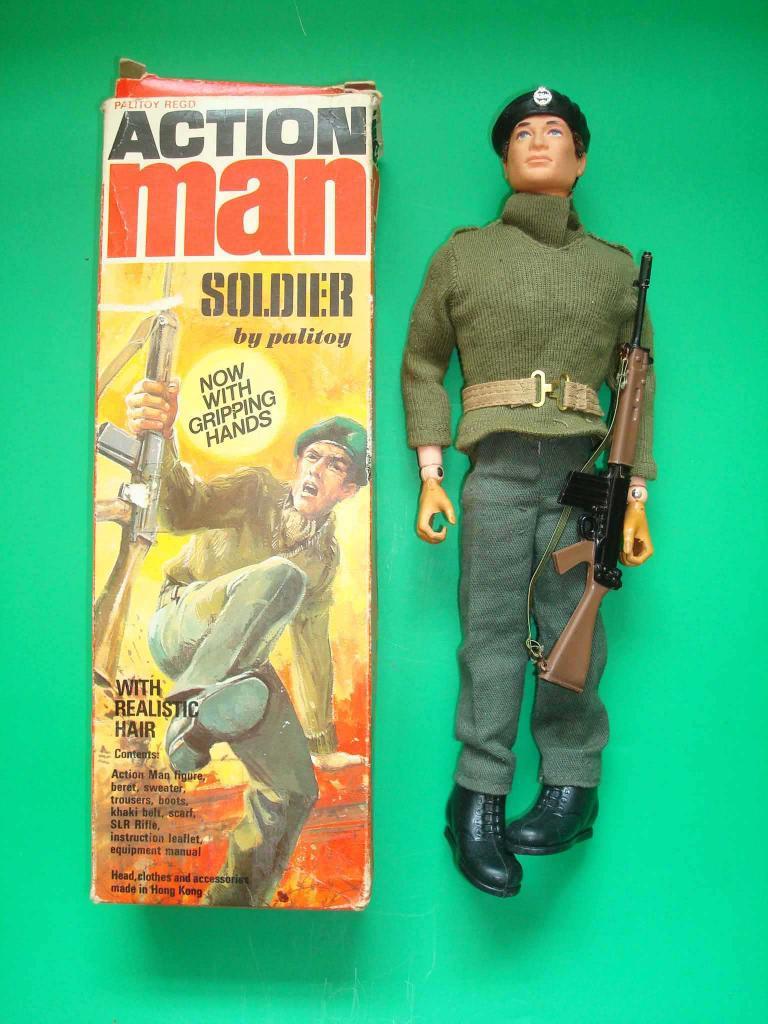 We gave these scarred warmongers names like John, Dan, Steve, Ben and Jack – these men had no time for two-syllable names; they were too busy spraying the garden flowerbeds with bullets or trying to blow shit up, such as the long-suffering family pet.

Action Man came with a myriad accessories to aid him in his tireless combat: Officer uniforms of every rank and weapons of every description, as well as the vehicles: tanks, jeeps, armoured cars and helicopters. In 1976 he even developed the latest in toy technology: “Eagle Eyes” which afforded him the mind-blowing ability to look left. And right. 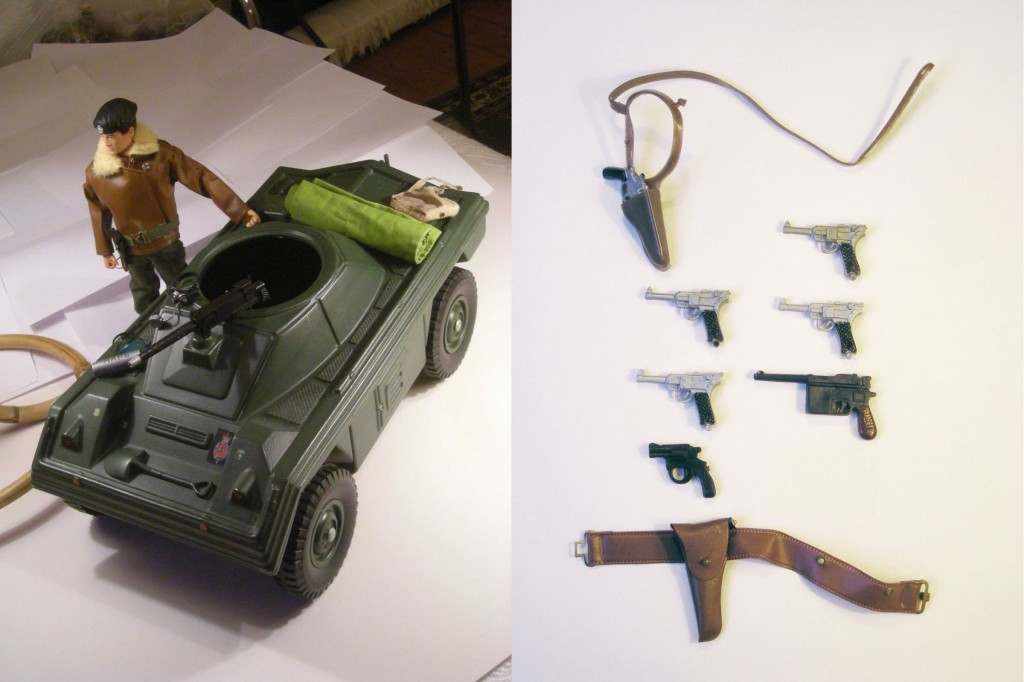 But something happened in the 1970s that shook at the very foundations of this virile icon of boy toys:

Action Man was slowly emasculated by mums, aunts and grandmothers all across Great Britain.

The 1970s were tough. It was a decade of social unrest and trade union strikes, which plunged the nation into darkness. Family homes were lit by candlelight, bodies went unburied and rubbish piled up in the streets, attracting rats.

The country was poor and people were forced to tighten their purse strings. This meant that corners had to be cut come Christmas time. Whereas Santa might have previously brought an Action Man and an accessory or two, now he would only have enough space in his sack for the Action Man doll, I mean “figure”.

Mums didn’t want their precious sons to go without, so, in a thrifty era of DIY and craft books, they decided to make their own accessories. However, they didn’t trawl the local libraries for images of military equipment that they could replicate in miniature; they got out their knitting needles…

Aided by the plethora of knitting patterns for “play dolls” by publishers such as Sirdar, Robin and Emu, they made little jumpers. And little cardigans.  And little roll-necks. And little pants. And little scarves. And little bobble hats. My friend’s mum even made little ear warmers and a little muff for his Action Man’s “gripping hands.”All matching, of course. And to be honest, they weren’t so little: normal-sized wool knit on a 12inch Action Man made him look like a 4 year old toddler lost in the clothes of the 8yr old he was expected to grow into. Mums did try their best to distract from the problem of puffed-up action knitwear by incorporating pretty patterns, but it somehow only made things worse. 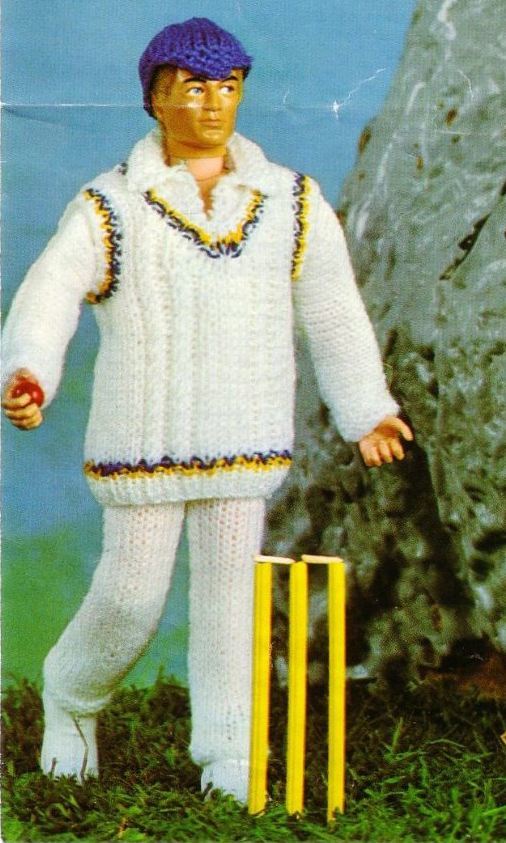 Away went the uniforms, too: the RAF pilot jacket, the camouflage desert fatigues, the German storm trooper uniform, the SAS night-gear, and in came a new wardrobe supervised by the nation’s matriarchs: Action cricketer, Action fisherman, Action man of leisure. 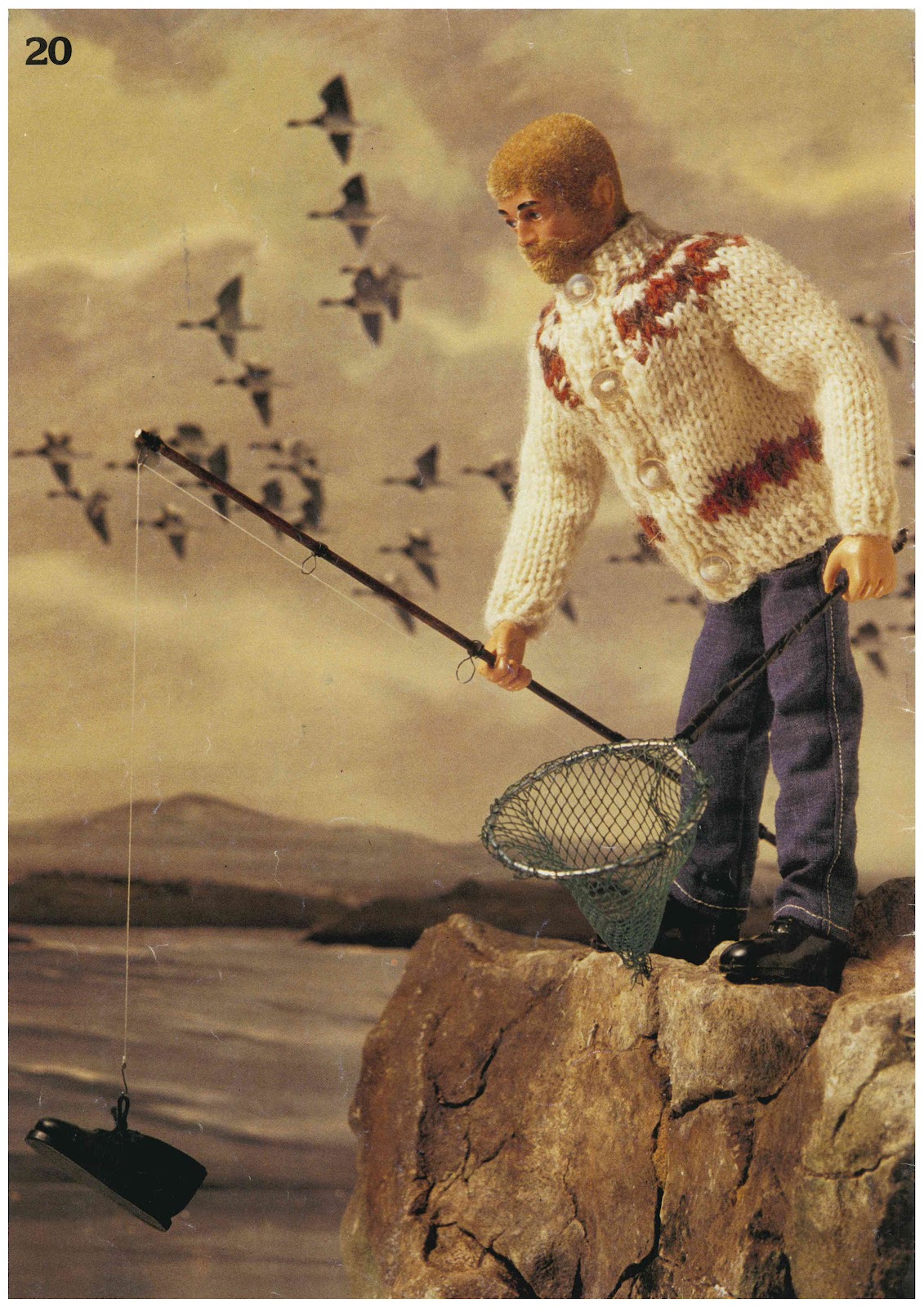 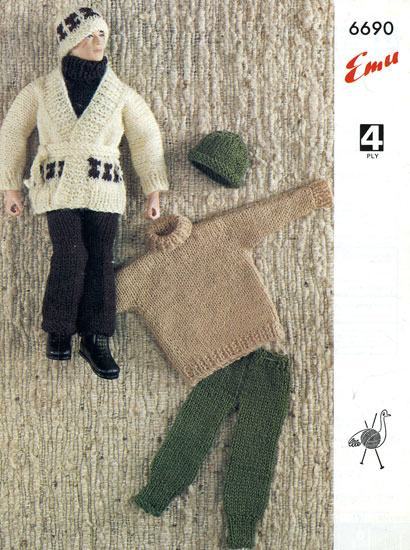 Even Sirdar’s 1979 pattern for a suitably masculine lumberjack jumper only served to remind us of Monty Python’s Lumberjack Song transvestite who liked to skip and jump, press wild flowers, put on women’s clothing, and hang around in bars. 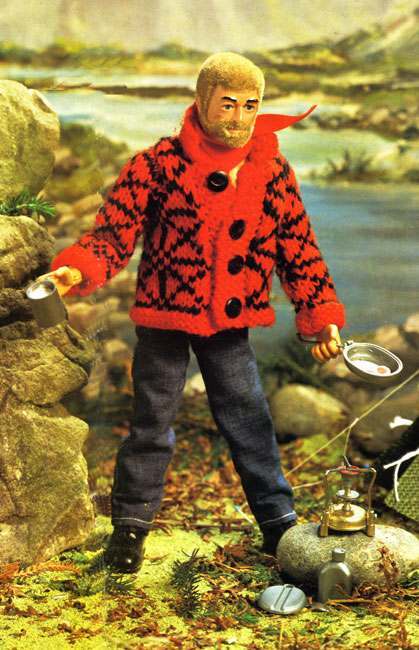 By the end of the decade, my Action Man, and those of my friends, when brought together, looked less like a crack army of gnarled military veterans than the audience of a folk music festival or poetry reading. They were no longer called Ben or Jack; they were called Oliver or Simon. 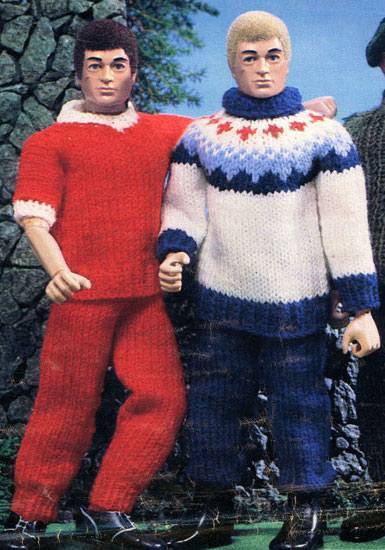 My younger sister, who had once frequently borrowed my Action Man to accompany her Sindy (a doll, not a figure) in romantic scenarios, began to spurn him. Action Man had fallen out of favour, replaced by a beanbag clown. He was somehow no longer the man he had once been and for the first time in his history he seemed to deserve his plastic-knotted, eunuch groin.

Personally, I didn’t mind. If I’m honest I don’t think I even noticed at the time. If memory serves, I learned to knit and even made my own diminutive scarf.
Did the emasculation of Action Man affect my development?  I’m now in my 40s and I have to admit that I’m much more inclined to appreciate a traditional, hand-knitted, fair-isle tanktop than I am a submachine gun or hand grenade, knitted or otherwise.