Before David Gandy, before Nick Kamen, there was David “Piggy” Worth.

David “Piggy” Worth and Judy Nylon at the back of the building which housed his basement flat, Edith Grove, World’s End, London, 1971. Photo: © Tony Hall. No reproduction without permission 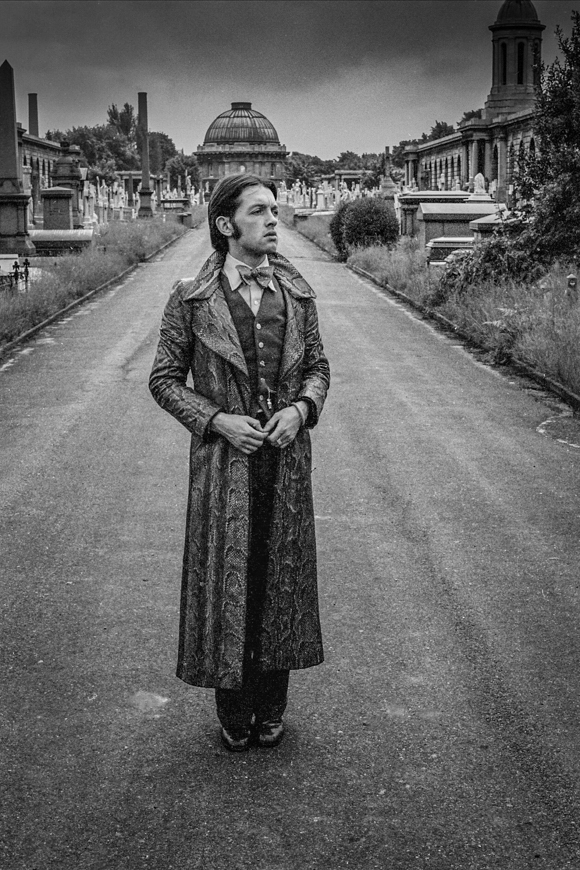 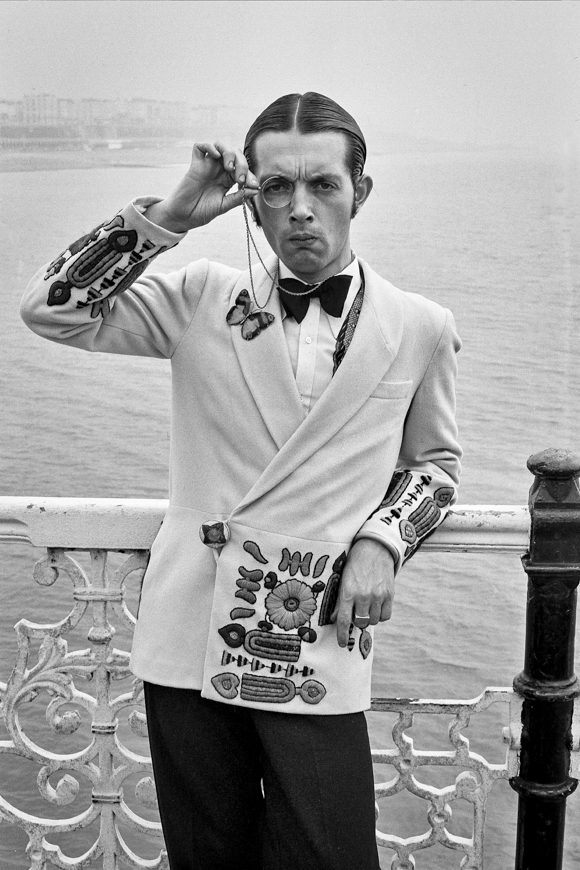 “Piggy got me my first job with Helmut Newton” – Yvonne Gold

“He was an amazing character, funny, exuberant, outgoing, such fun to be with. Everybody wanted to be his friend” – Tony Hall 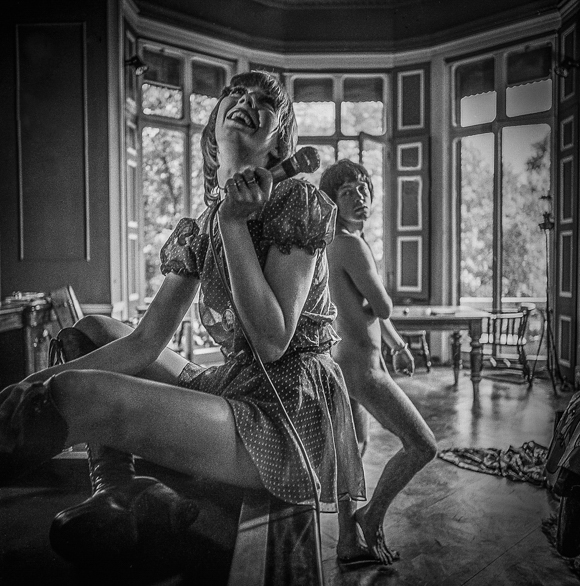 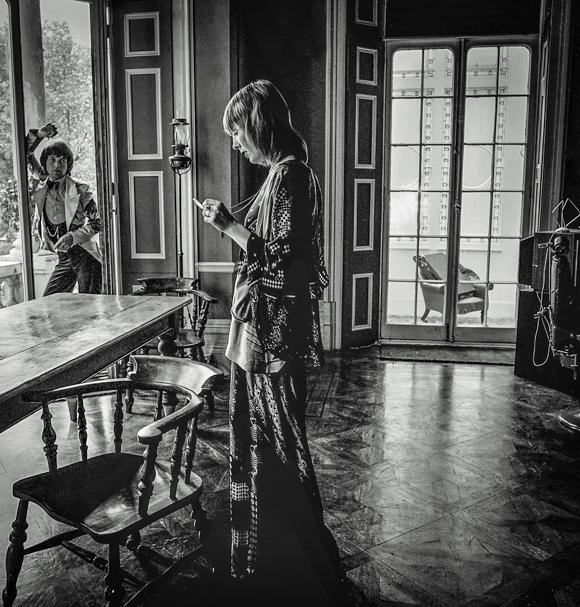 His unique presence enlivened the flat world of male fashion in England in the early to mid-70s, but the late Worth wasn’t just a model; he was also a clever stylist and a nonpareil antiques and vintage collector. 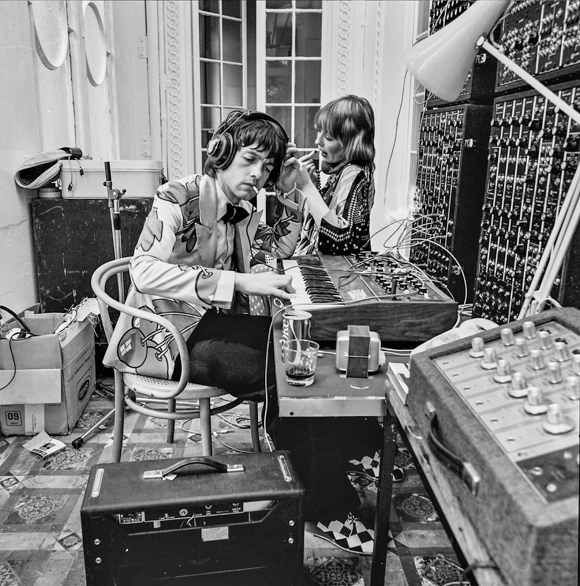 In the recording studio at Graeme Edge’s apartment in Bayswater, 1971. Photo: © Tony Hall. No reproduction without permission

Today Worth – whose modelling pseudonym was a mickey-take of Twiggy’s – is also remembered as a symbol of exotic London’s all-but lost 1970s demi-monde, as evinced by this series of photographs taken by his friend Tony Hall.

Featuring props and clothing from Worth’s vast collection, this is the first time these images have been published in 45 years after Hall came across a box of negatives.

At the time they were taken, Hall was a 19-year-old trying to catch a break into photography while Worth – who was a couple of years older – was working as a window dresser for John Stephen’s Carnaby Street empire and harboured ambitions to move into fashion. 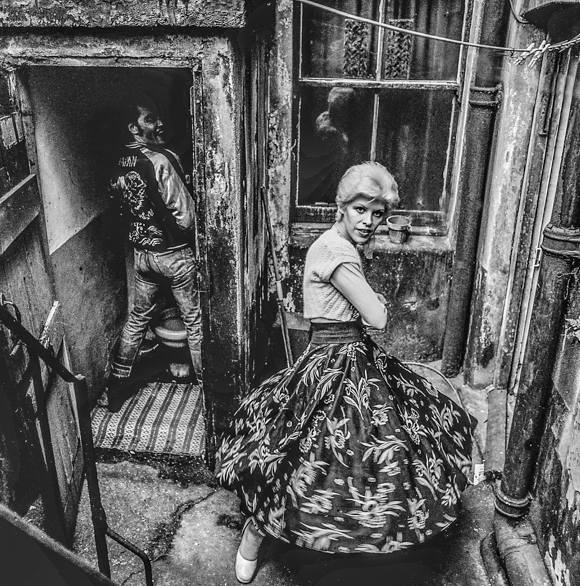 Fifties-themed shoot with Nylon, at the back of Worth’s Edith Grove flat, west London, 1971. Photo: © Tony Hall. No reproduction without permission

They were taken in a variety of locations, including Worth’s grotty Chelsea flat – just down the road from the infamous and equally down-at-heel abode of some of the Rolling Stones a decade earlier – and a plush Bayswater apartment owned by an acquaintance, Graeme Edge, drummer of the Moody Blues.

“David had a passion for clothes and antiques, particularly from the 20s and 30s and a lot of Art Deco and Art Nouveau,” says Hall, who was brought up in Chelsea’s Bohemian World’s End neighbourhood, where Worth lived in a basement flat in Edith Grove, south of King’s Road.

“I used a second-hand Pentax S1a,” recalls Hall. “The way we worked was usually pretty spontaneous and very much a collaboration. We would come up with ideas together and just go for it. Neither of us were prima donnas or precious.”

In Worth’s circle were the likes of the American artist/writer/thinker Judy Nylon, who lived at 14 Edith Grove and appeared in some of the photos. I am grateful to artist Duggie Fields for identifying the New Yorker Gaby Longhi, who appeared in Andrew Logan’s Alternative Miss World competitions and was later an editor at Glamour and Vogue in her native New York. Among Worth’s friends was the British make-up artist Yvonne Gold and members of the crowd congregating around Malcolm McLaren and Vivienne Westwood’s World’s End outlet Let It Rock.

The identities of the other models in these images have been lost to time. I identified Nylon, while Hall recalls that the female in the Edge apartment shots was the drummer’s girlfriend at the time. Any help in ID-ing her and the model with Worth in the canal-side shot would be gratefully received. 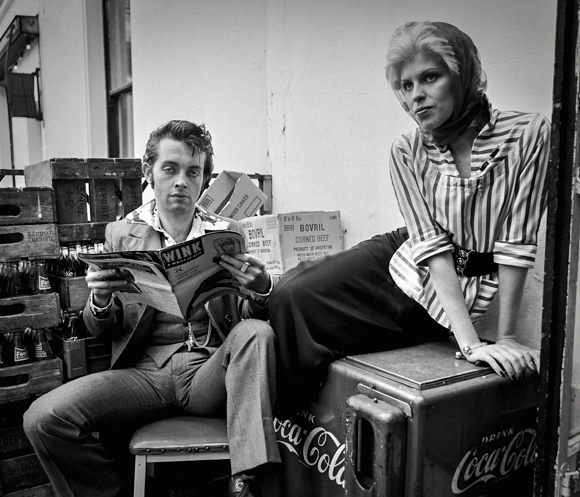 Another Fifties-themed shoot with Nylon, at the back of a King’s Road cafe, west London, 1971. Photo: © Tony Hall. No reproduction without permissio

“I remember he had all the props from window dressing at John Stephen as well as Art Nouveau mannequins and statues draped in ropes of pearls, which I wore to Biba’s black and pink-themed New Year’s Eve fancy dress ball,” says Gold. “Piggy also got me my first modelling job, for a drinks brand with him and me shot in the World’s End pub by Helmut Newton.” 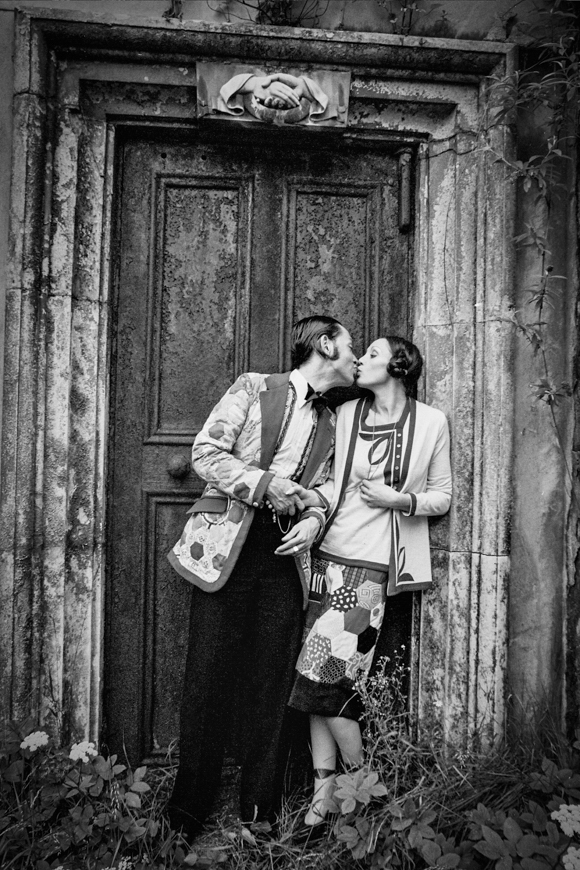 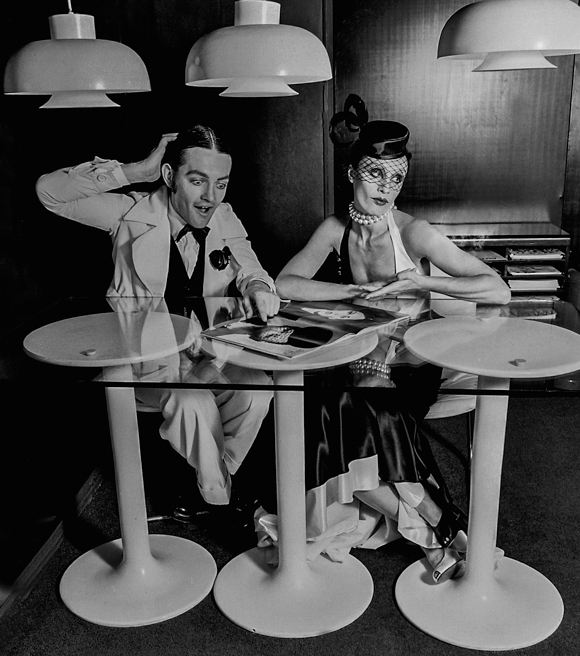 Seeing Hall’s photographs for the first time in more than four decades has prompted a flood of memories from Nylon.

“What attracted me to Piggy, since I was new in town, was the urban archeology of his possessions displayed in his flat,” says Nylon. “I am from Boston, one of the great museum/anthropology towns; he made me cups of tea and let me poke around his collections.

“This world was pre-video and not in the lineage of fashion at all, close to film, because of the continuity details and the fact the photos were often done in series, but also close to the music world because, like music performers, the models didn’t become ‘characters’, rather they slipped into a character/situation remaining more or less themselves with their own clothes and makeup. Piggy was a master of this. His ability to project a different self was something I later saw in Adam Ant.” 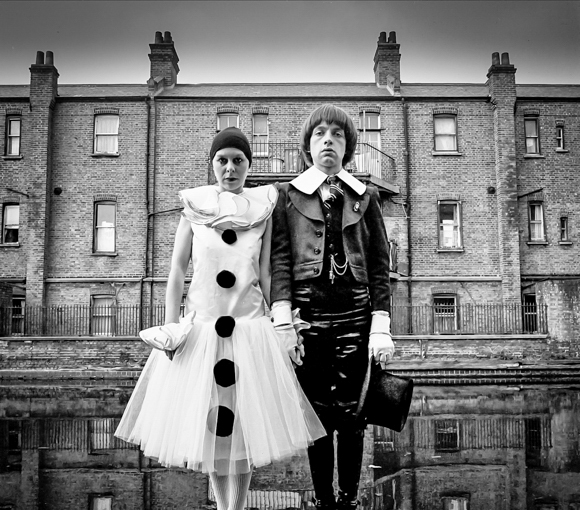 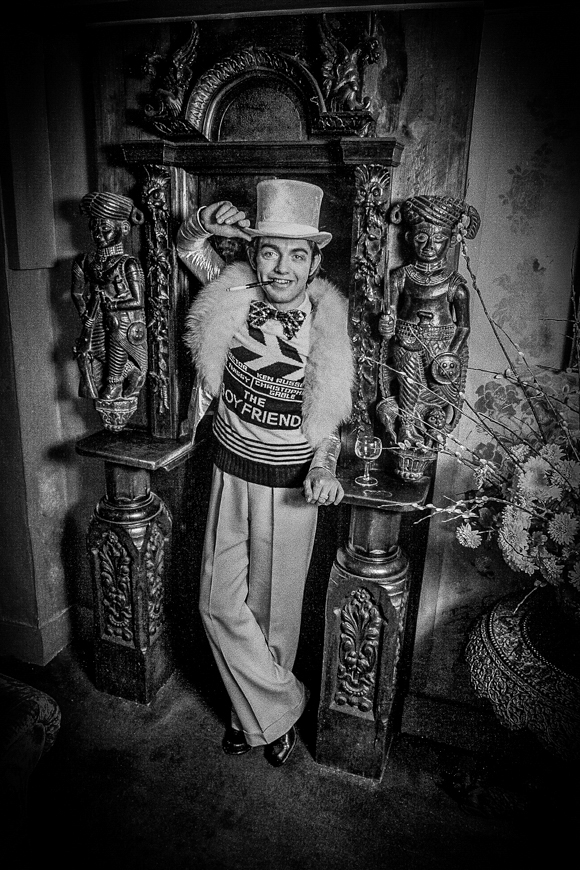 Worth’s collection of vintage clothing and artefacts was utilised by Shirley Russell for the sets and actors in her husband Ken’s 1971 film The Boyfriend. Worth celebrated the fact by having a special sweater knitted for himself

I well remember Worth for his out-there personality; by the mid 70s he had become a major collector of Beatles ephemera and sported a mop-top (pretty much as he does in some of these photos) with an original collarless Dougie Millings suit and Beatle boots and badges when he hung out with the likes of Jordan Mooney, the Sex and Seditionaries superstar assistant.

With his modelling career underway as the subject of photographs by the likes of Herb Schmitz (who Hall assisted), Worth continued window dressing for King’s Road fashion outlets including Tony Lonsdale’s Jean Machine at 163 (where DJ/filmmaker Don Letts worked for a period before joining Acme Attractions). 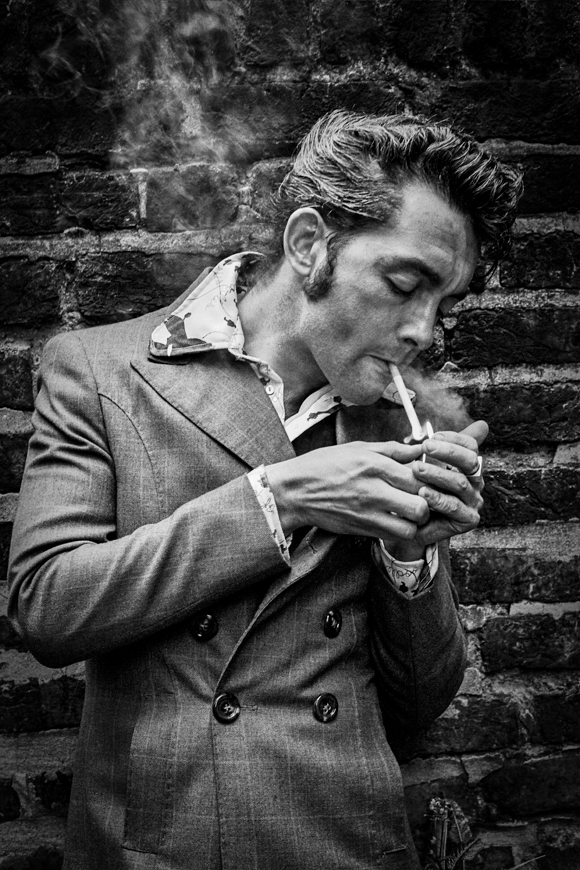 Greased up at Edith Grove. Photo: ©Tony Hall. No reproduction without permission

“Once David set up the window around this beautiful sequinned jacket but after an hour the management asked him to take it away because the customers were only interested in buying that rather than any jeans they had,” says Hall.

“David didn’t give a toss what people thought,” says Hall. “When we went to the premiere of The Boyfriend we were both dressed up to the nines in satin jackets, his with daffodils printed all over it. There were a group of people sending him up something rotten but he couldn’t care less.” 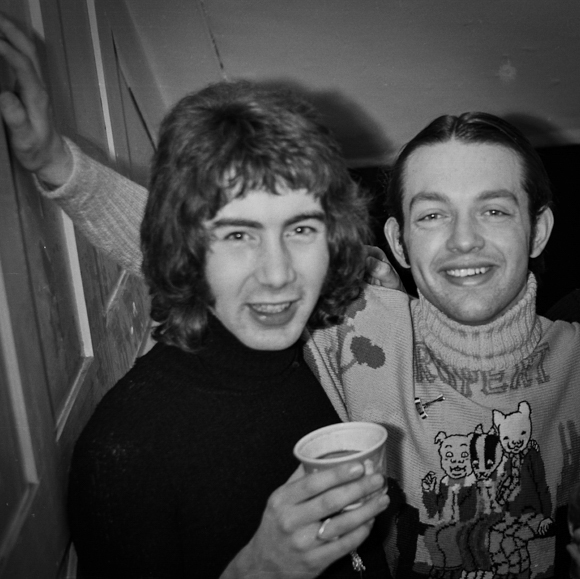 In the 80s, his modelling days at an end, Worth became a porter at London’s Royal Marsden Hospital and also volunteered at weekends for 17 years to work with HIV and Aids patients and at Mother Teresa’s Missionaries of Charity Sisters. A colleague from the hospital informed Hall that Worth took early retirement about 10 years ago and that he subsequently heard that he had passed away, though this has not been verified.

‘It’s really sad; I wish I had tried to establish contact earlier,” says Hall. “I think David would have been very happy to see the photos after all this time. Though I say it myself, I think they stand up today. I have half a dozen framed and hanging in my office. I don’t think I’ll ever get bored of looking at them.”

Visit Tony Hall’s website, which has a section dedicated to the memory of David “Piggy” Worth, here.