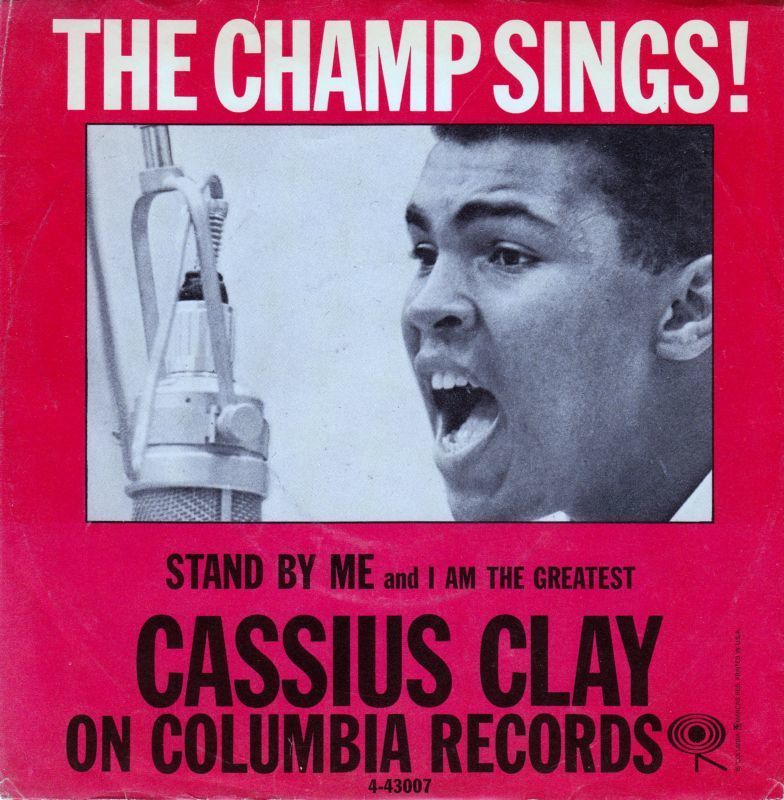 Muhammad Ali (born Cassius Marcellus Clay, Jr., January 17, 1942 – June 3, 2016) wasn’t much of a singer. Not that inability put him off singing in public. In 1963, the boxing champion released an album humbly entitled I Am the Greatest. 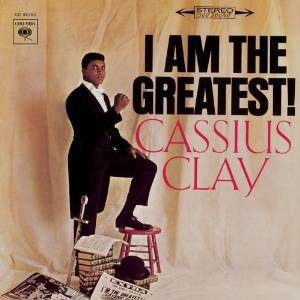 Round 1: I Am The Greatest
Round 2: I Am The Double Greatest
Round 3: Do You Have To Ask?
Round 4: I Have Written A Drama
Round 5: Will The Real Sonny Listen Fall Down
Round 6: Funny You Should Ask
Round 7: 2138
Round 8: The Knockout
Round 9: Afterpiece

On 3 Mar 1964, Columbia Records produced a second Ali recording, this time of the boxer singing Stand By Me, the song that would prove to be an enduring hit for B. E. King. The aforesaid spoken world album became the B-side.

Could Ali’s showbiz pals help him to sing better? This video from March 1964 features Ali singing Hey, Hey The Gang’s All Here with the honey-toned Sam Cook (January 22, 1931 – December 11, 1964). The other man to appear in the video is the British sports journalist Harry Carpenter (17 October 1925 – 20 March 2010). The interview was recorded for the BBC shortly after the first Clay vs Liston fight.

Carpenter:  “Cass, who’s that you’ve got there with you in the New York studio?”

Ali: “Well, here with me I have one of the greatest singers in America, and I would say all over the world, Mr. Sam Cooke. Come here, Sam, I’ve got the British press here. This is Sam Cooke. As you can see, like me, he’s awful pretty.”

Of course, charisma and chutzpah can go some way to make up for a lack of singing talent, and that surely is what producer Zev Bufman hoped for. He offered Ali a starring role in Buck White, a black radical Broadway musical based on Joseph Dolan Tuotti’s play Big Time Buck White

and adapted for stage by Oscar Brown, Jr, who provided both music and lyrics. 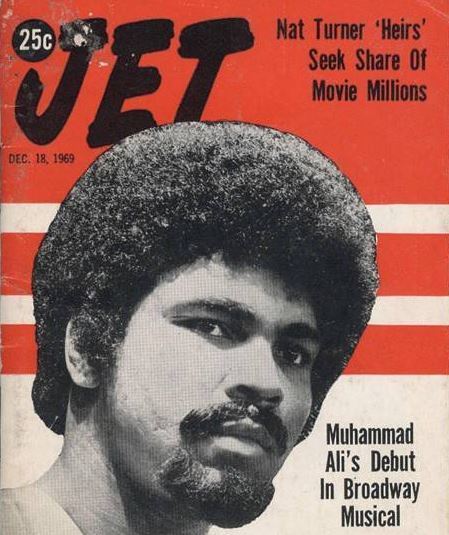 Banned from boxing, stripped of his titles, his passport confiscated, sentenced to five years prison and fined $10,000 for evading the Vietnam War draft, Ali was available for work. He took the job. It wasn’t as if he was shy of going on stage. In public he had spoken with conviction, belief and force. He was the embodiment of grace, kindness and purpose, a towering figure whose braggadocio transcended sport. Faced with war or prison, he chose peace: “My conscious won’t let me go shoot my brother or some darker people or some poor hungry people in the mud for big powerful America. Shoot them for what? They never called me n*gger, they never lynched me, they didn’t put dogs on me, they didn’t rob me of my nationality … How can I shoot them poor people? Just take me to jail.”

Instead he took himself to Broadway. (The appeals process meant Ali never did serve a prison sentence.) 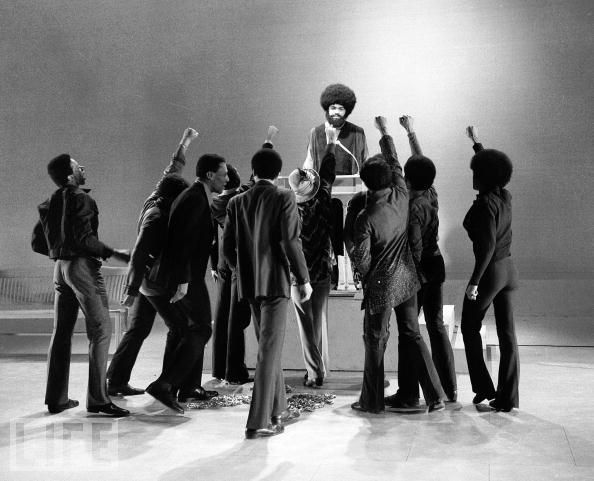 Buck White focuses on its namesake, a militant Black Power leader who invigorates and focuses a group of radical black activists. 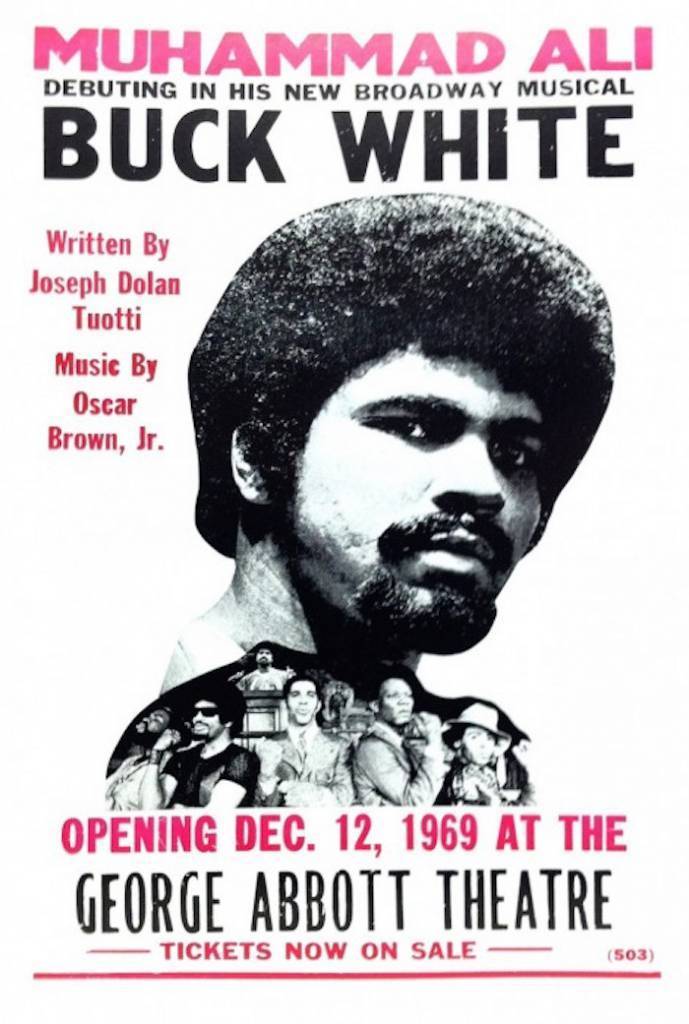 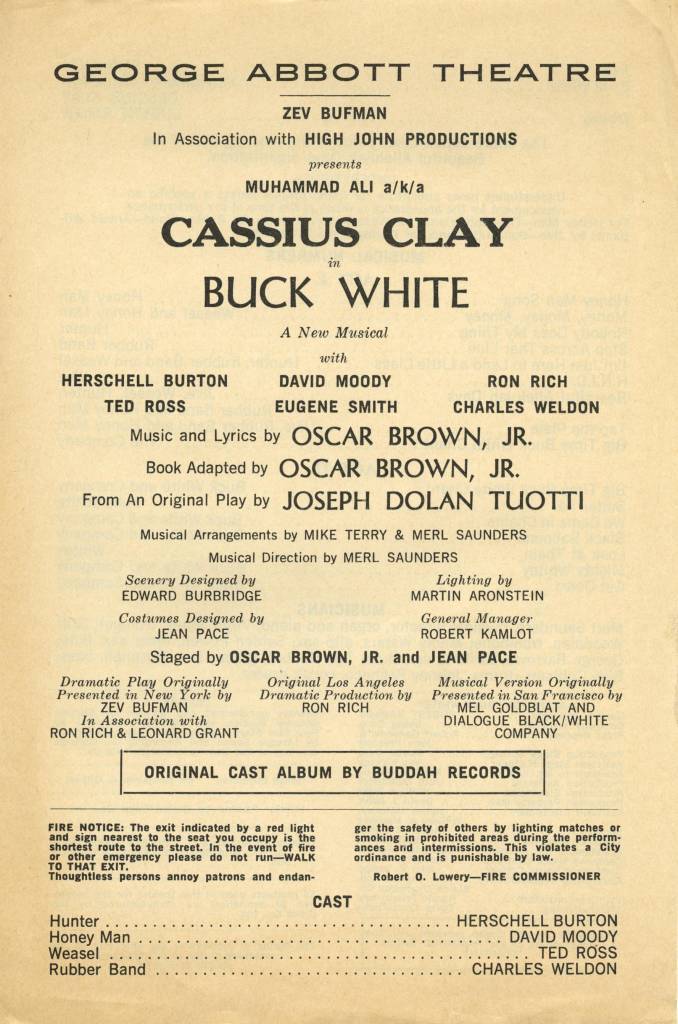 To promote the show, Ali performed the song We Came in Chains on The Ed Sullivan Show.

The crowds never fancied it. Buck White ran for just seven performances at New York’s George Abbott Theatre (Dec 02, 1969 – Dec 06, 1969). Few clips are available, but we can enjoy this scene in which Buck (Ali) delivers a Black Power message to Whitey (Eugene Smith).

Was that the end of Ali’s recording career? No. 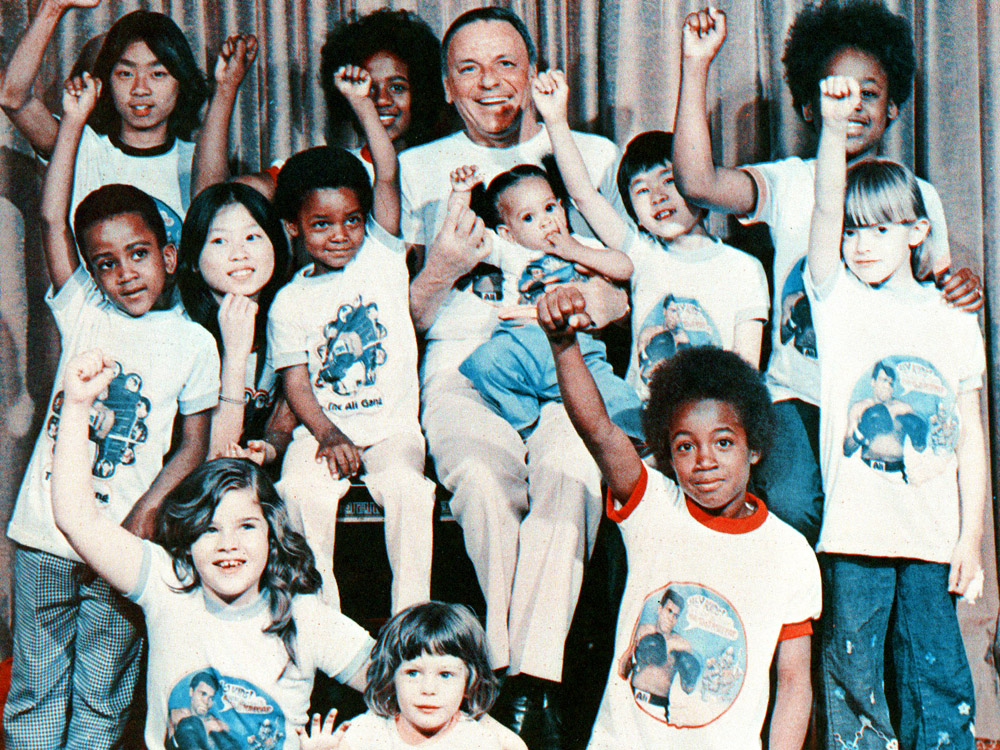 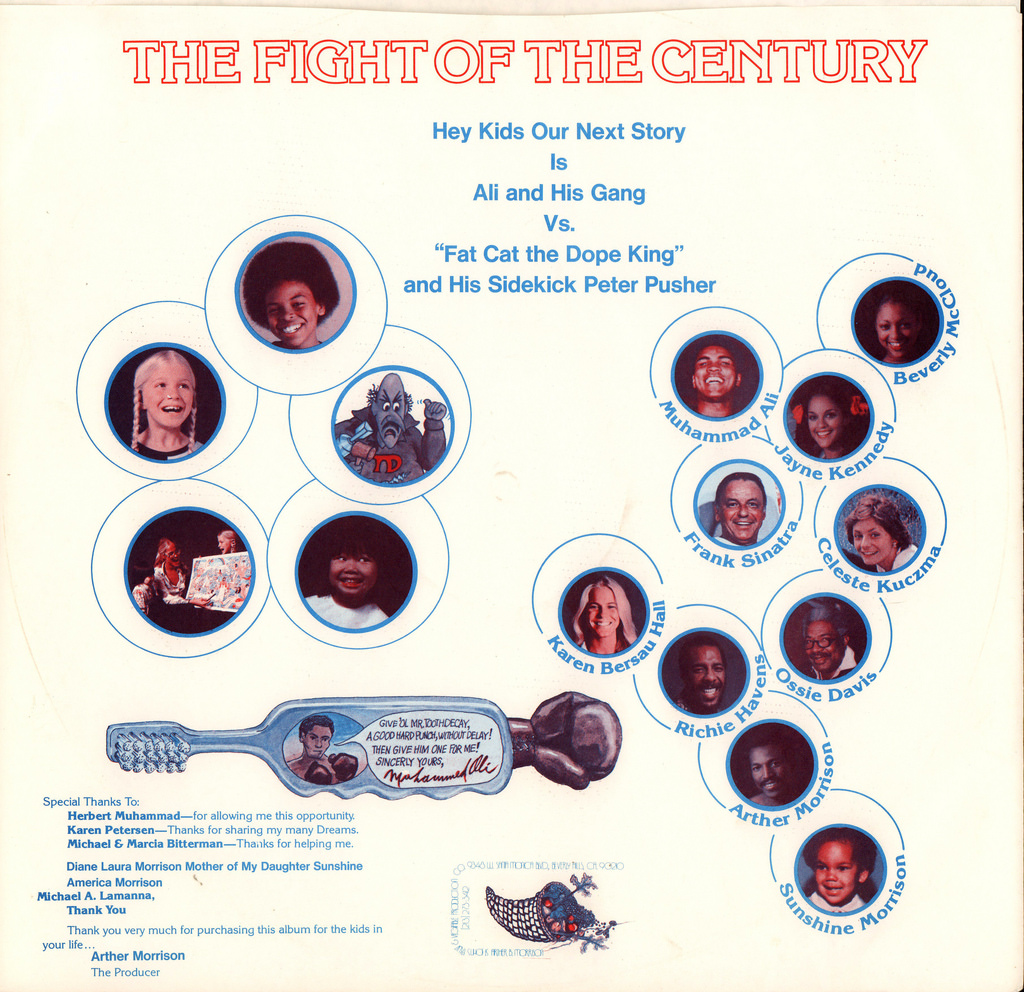 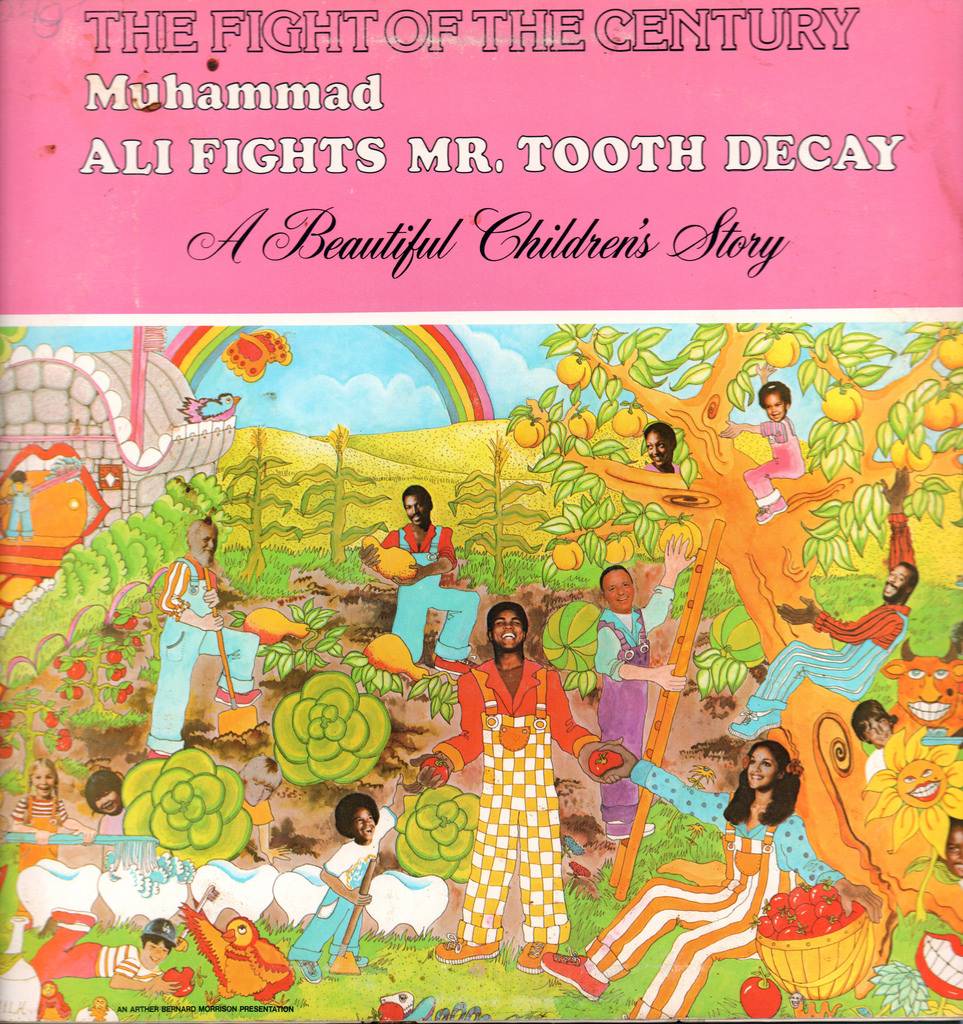 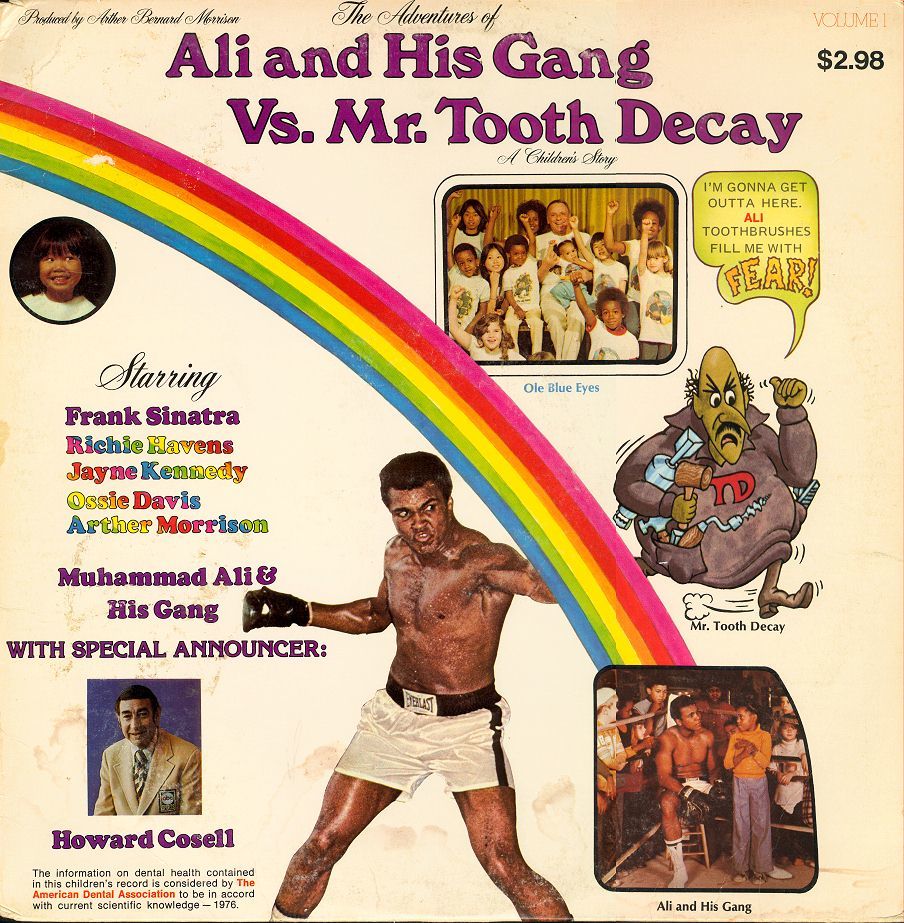 In 1976, Ali, cleared of draft evasion was the two-time World Heavyweight Champion. But something troubled him: bad teeth. Ali and his gang of anti-tooth-decay activists – Frank Sinatra, Ossie Davis, Richie Havens and Howard Cosell – recorded Ali and His Gang Vs. Mr. Tooth Decay, brought to young ears by the St. John’s Fruit And Vegetable Co. The recording scored a Grammy nomination in the category of Best Recording for Children, losing out to Hermione Gingold and the Vienna Philharmonic’s superb record Prokofiev: Peter and the Wolf; Saint-Saens: Carnival of the Animals.

One hint as to why Ali wanted a part of it suggests itself in the script. A load of kids spot The Greatest. “Hey, that’s Ali,” they chime. “What’s he doing here? Oh he’s so big and handsome. Wow. Let’s get his autograph.”

Cosell trails a fight between Ali and Mr Tooth Decay by trash talking Ali’s biggest rivals in boxing: “As one looks at Ali, one has to wonder what he’s thinking. This is the greatest adversary he has ever faced. Tougher than Joe Frazier and tougher than George Foreman. One has to wonder if the confidence is really there this time. Can Ali put away Mr. Tooth Decay?”