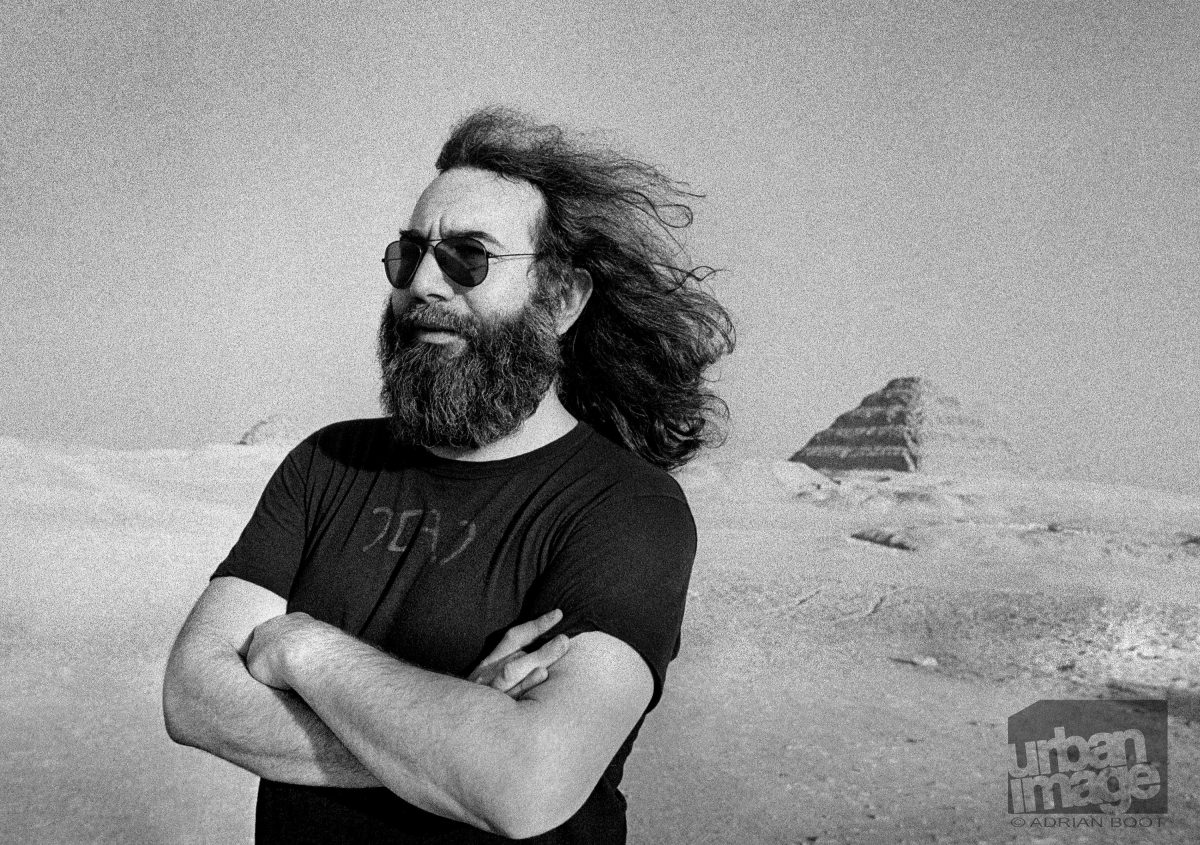 What is with hippies and pyramids? Show them a pyramid and they see through all three eyes something essential, spiritual and cosmically far out. In 1978 The Grateful Dead were drawn to the greatest pyramids of them all. “It sort of became my project,” recalled the band’s Phil Lesh, “because I was one of the first people in the band who was on the trip of playing at places of power. You know, power that’s been preserved from the ancient world. The pyramids are like the obvious number one choice because no matter what anyone thinks they might be, there is definitely some kind of mojo about the pyramids.”

The Dead were set on playing three concerts by Egypt’s hymned Pyramids to an audience of one Sphinx “a plane-load of Dead heads, a gathering of bemused locals and a posse authentic desert Bedouins along with their tents, goats, horses and camels”. A pyramid, middle-class holidaymakers finding themselves, tents, hummus and local casual labour. Chuck in a huge perimeter fence, tepees and Kate Moss, and the Dead could sue Glastonbury for copyright theft.

You’d think hippies with all the skin-up and zone out wouldn’t get it together to schlepp from California to the Middle East. You know how long it takes a hippy to drive an old ambulance that far? Like, lifetimes. So it wasn’t without glitches. Rolling Stone says an “equipment truck got stuck in sand and had to be towed by camels”. And electricity in Egypt was an “a winkin’, blinkin’ affair”, band member Bob Weir later recalled. But it happened. “I got to a point where the head of the Sphinx was lined up with the top of the Great Pyramid, all lit up,” says Weir. “All of a sudden, I went to this timeless place. The sounds from the stage — they could have been from any time. It was as if I went into eternity.”

Amid all what Ken Kesey called the “cosmic stuff” that united the Dead and ancient Egyptians, was Adrian Boot, who in the mid-1970s had swapped being a physics teacher for a life as a music photographer. He takes up the story: 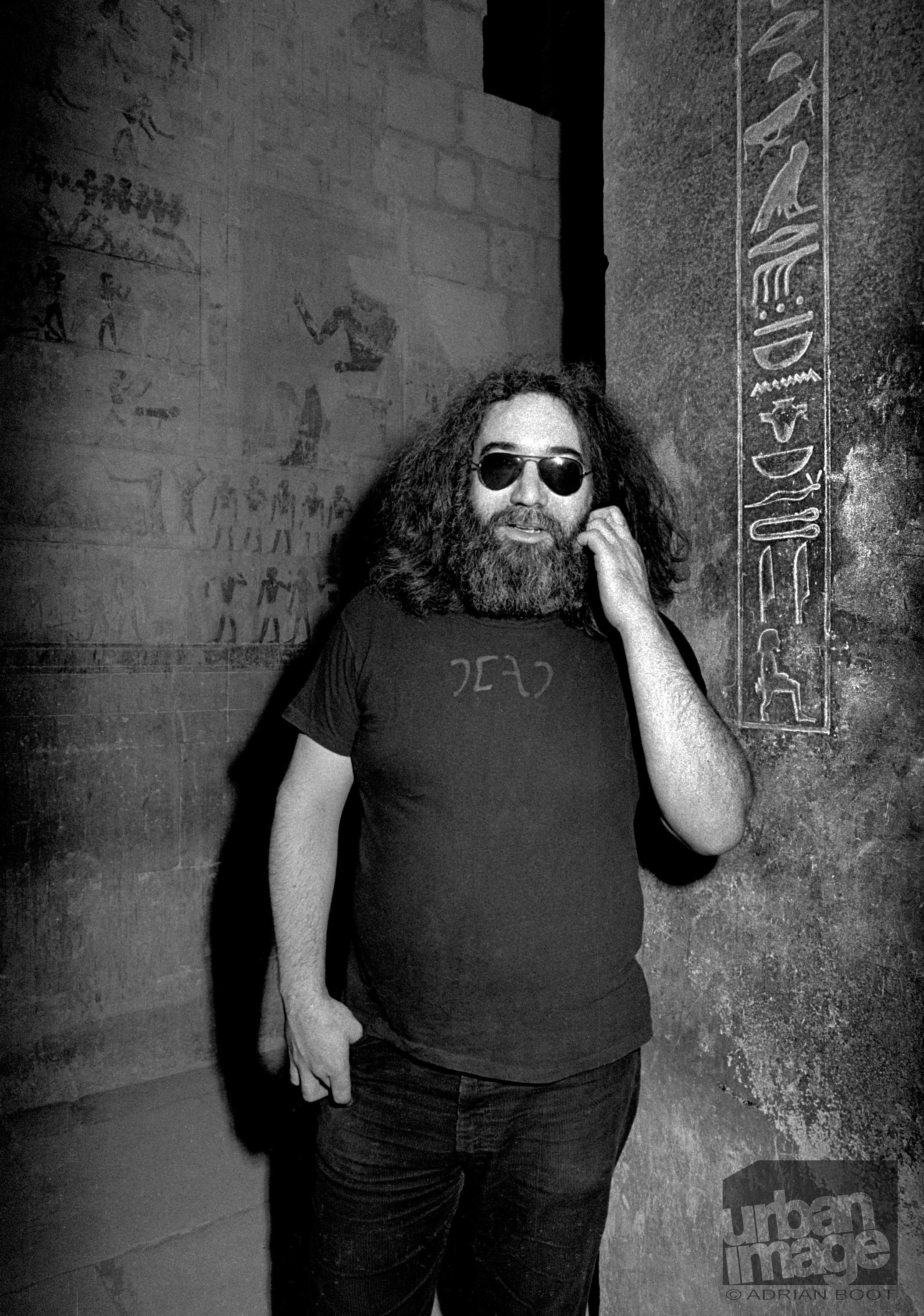 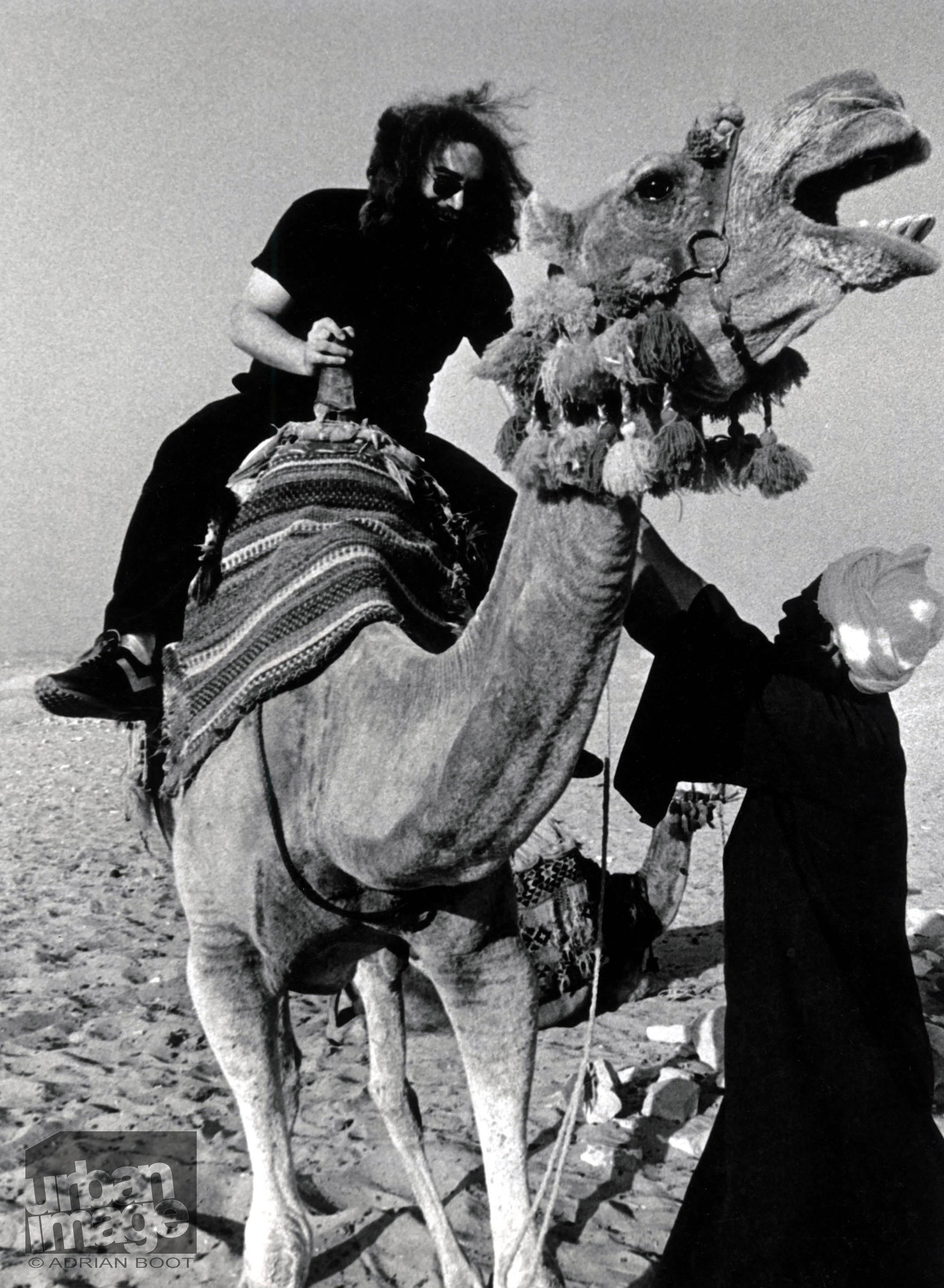 Then after a short plane ride, I discover that the Haight-Ashbury hippy movement hadn’t really gone away, It just relocated. Maybe it needed lots of warm summer weather and an optimistic outlook to survive, maybe that is why it had all but disappeared from London. So .. here I was in Egypt with Jerry Garcia, Mountain Girl, The Pranksters, The Grateful Dead and an entourage of grown-up hippies. For a week or so I was on the bus.. The electric cool aid acid test rekindled. Only this time it would include a Pyramid and a Lunar Eclipse. 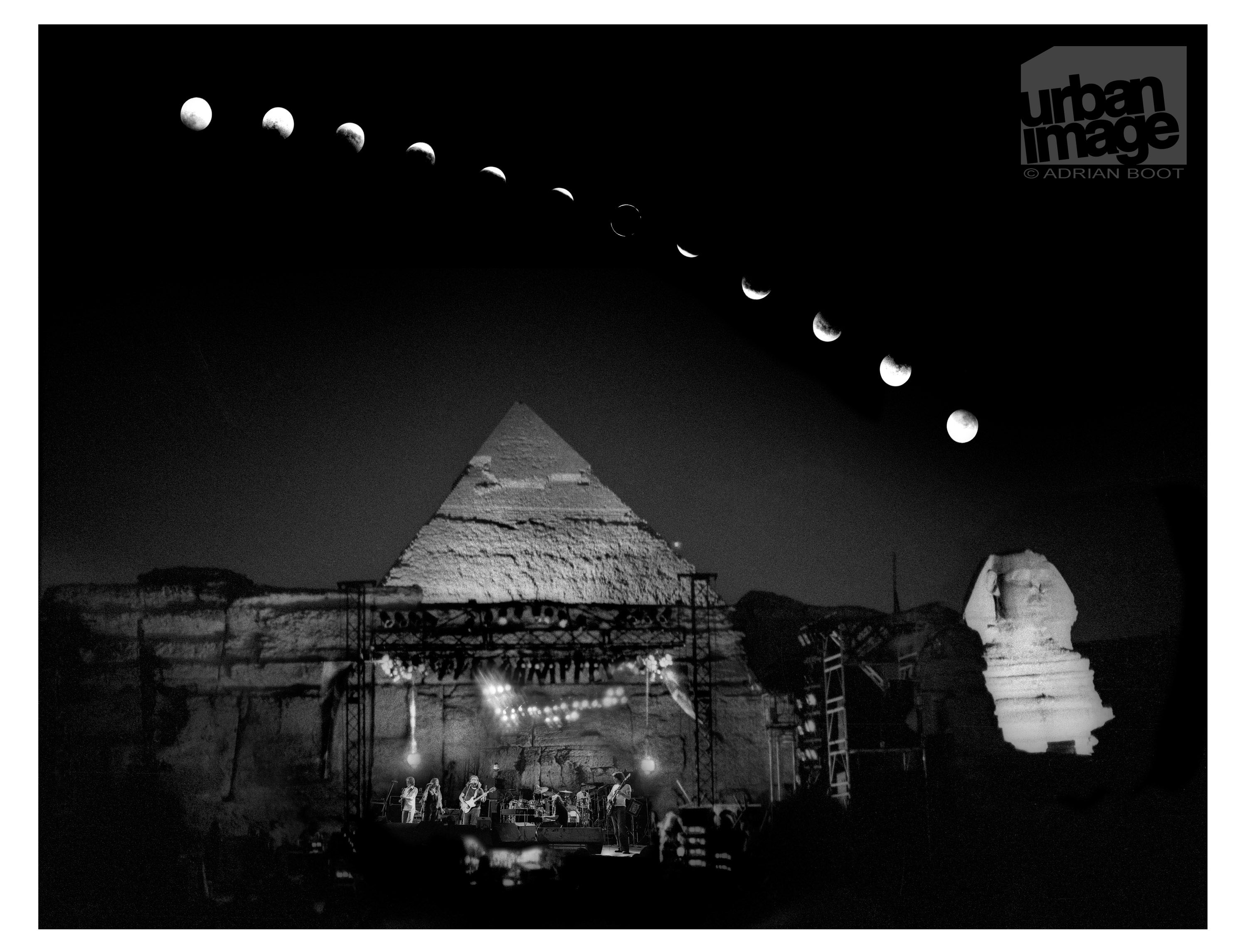 The Grateful Dead are in Egypt, playing three concerts before a thousand people a night at the Sound & Light Theatre, Giza, at the foot of the Great Pyramid and the Sphinx, with special guest, the local musician Hamza el Din. In reality the audience, other than a plane-load of Dead Heads, was a bunch of bemused Bedouins and their goats. Travelling with me are journalists Max Bell from the NME and Mick Watts from the Melody Maker. My job was to photograph the event for both papers, in monochrome as the UK rock press was still 100% black and white. Our paymaster as usual was the record company, keen to promote the Grateful Dead’s autumn UK concert and European tour. Today the idea of a rock band performing in Egypt holds far less cache than it in1978. It was unquestionably a novel notion when the Grateful Dead sought to begin diplomatic talks between the U.S. Government and Egyptian officials to permit the band to bring their acid trip to Cairo’s new Gizah Sound & Light Theater. Considering the precarious political state of the world at the time, it is a minor miracle that these shows came off at all. 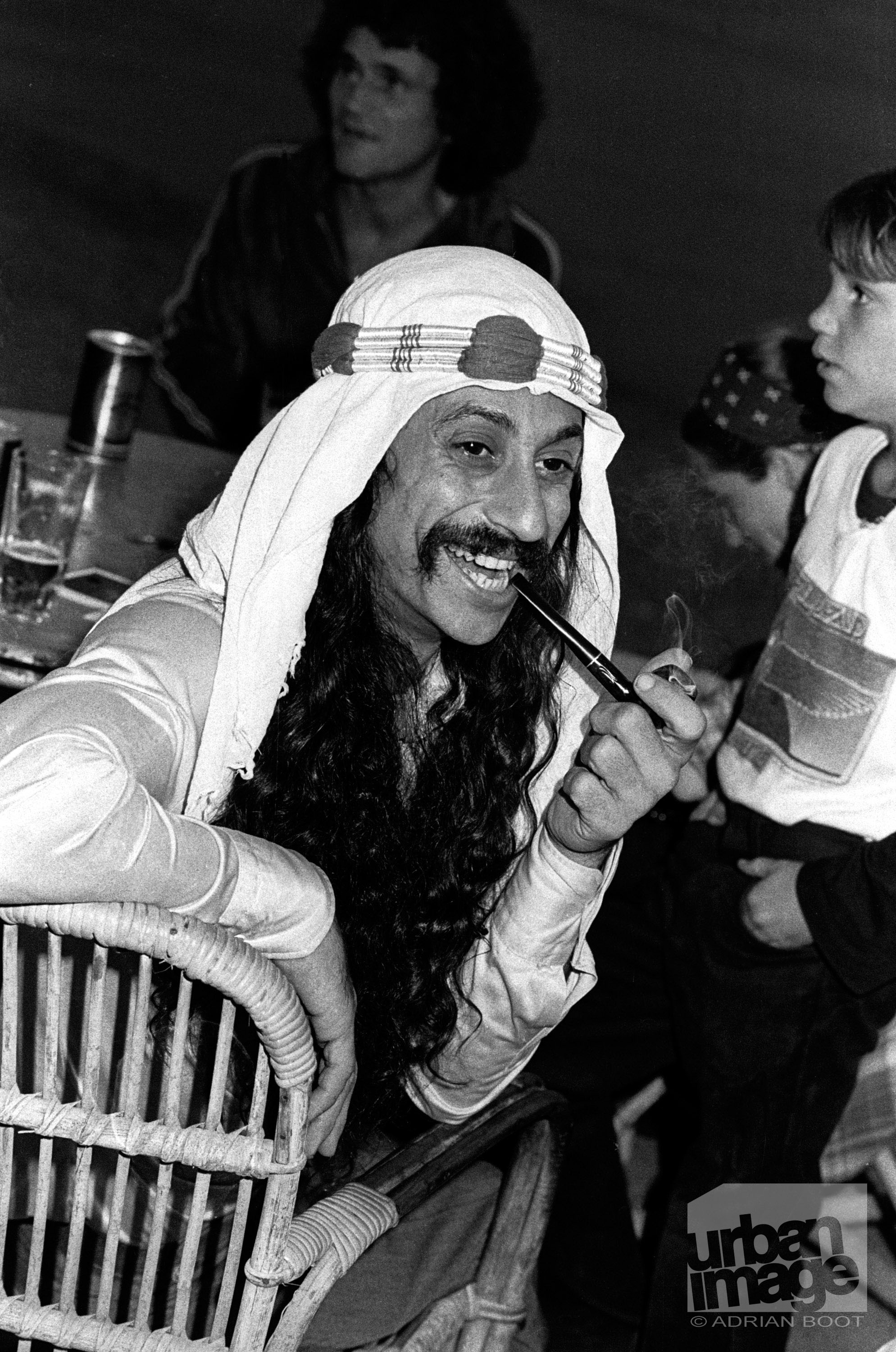 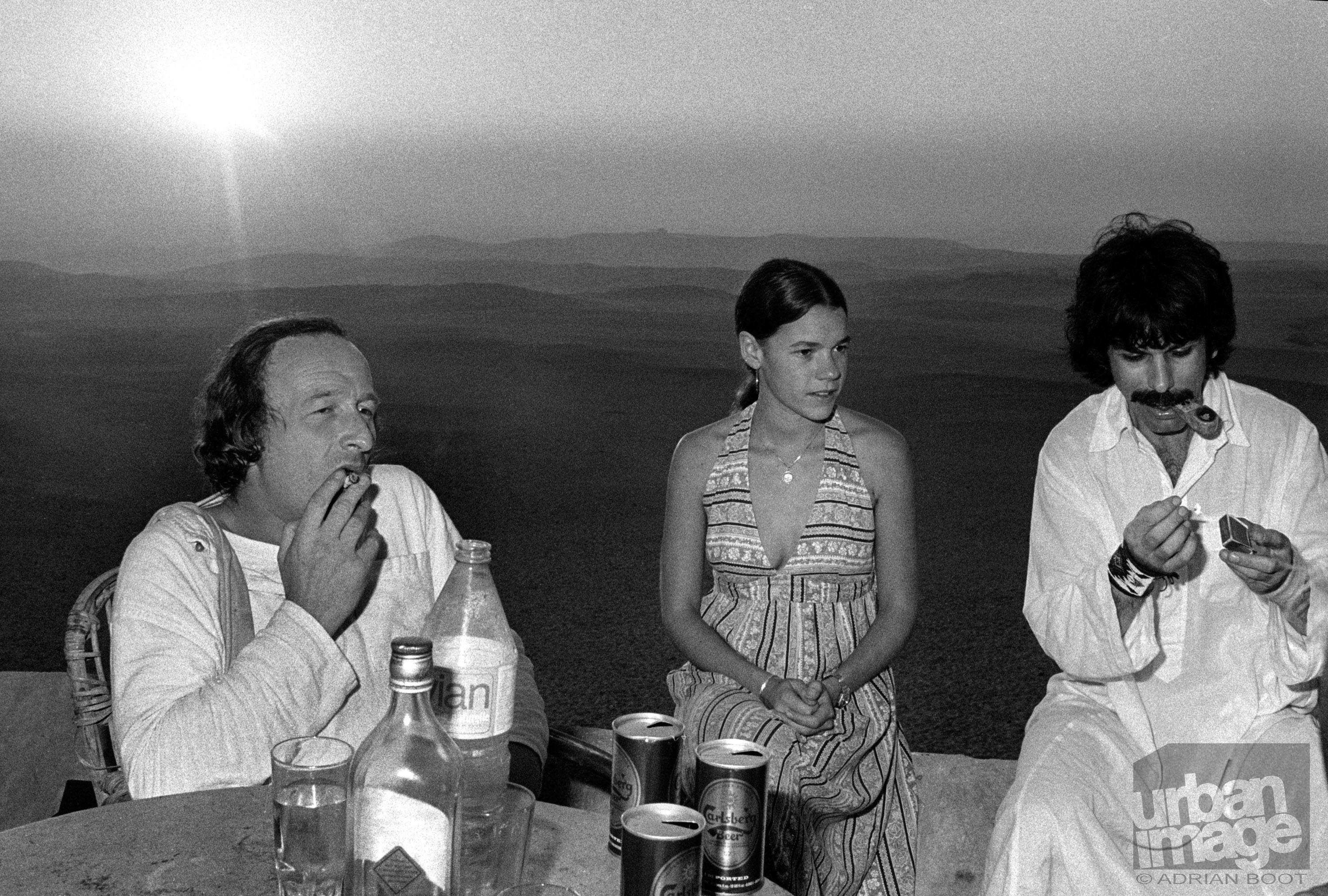 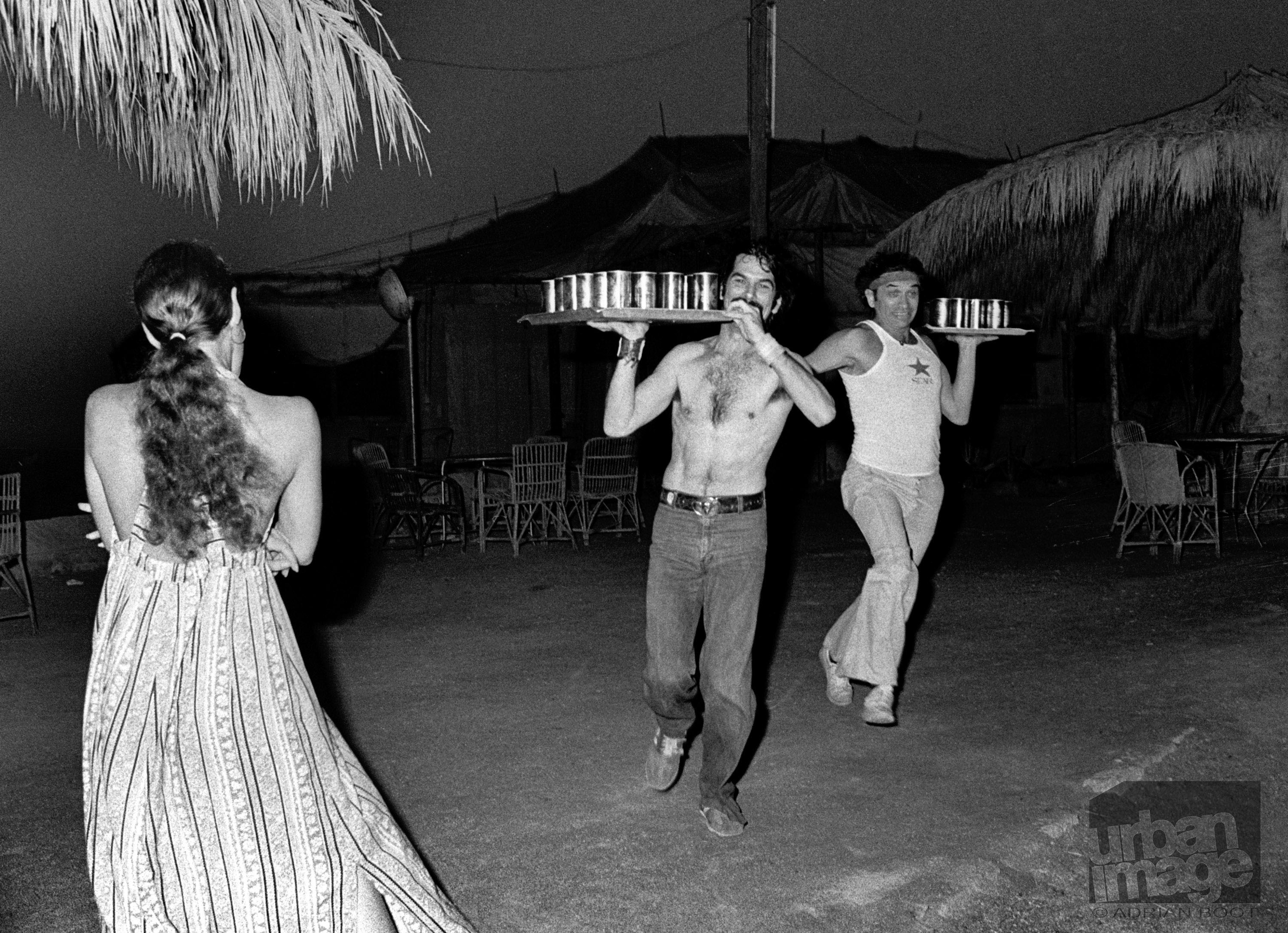 Jerry saw the whole Egypt TRIP in a different light to the record company execs. From the various the interviews I attended, he appeared to be less interested in talking about the imminent UK concert. The Dead were here to harness the energy of this ancient place, to coordinate a Lunar eclipse and levitate a pyramid. Oh .. and play three very long concerts. As things evolved over the next few days, it became clear that the Grateful Dead would be cancelling all UK concerts and European tours. Even Mick Watts the Melody Maker’s journalist became part of a long distance appeal from promoter Harvey Goldsmith office to Jerry Garcia. In those days telephone calls between Cairo and London were erratic and expensive. Our small band of journalists would wait in the Mina House hotel bar for the next call, the next episode, our livelihoods depended on it, we’re here to promote a tour. But the Dead’s energy and resources had already been consumed by a much more important project, this the ultimate acid test. 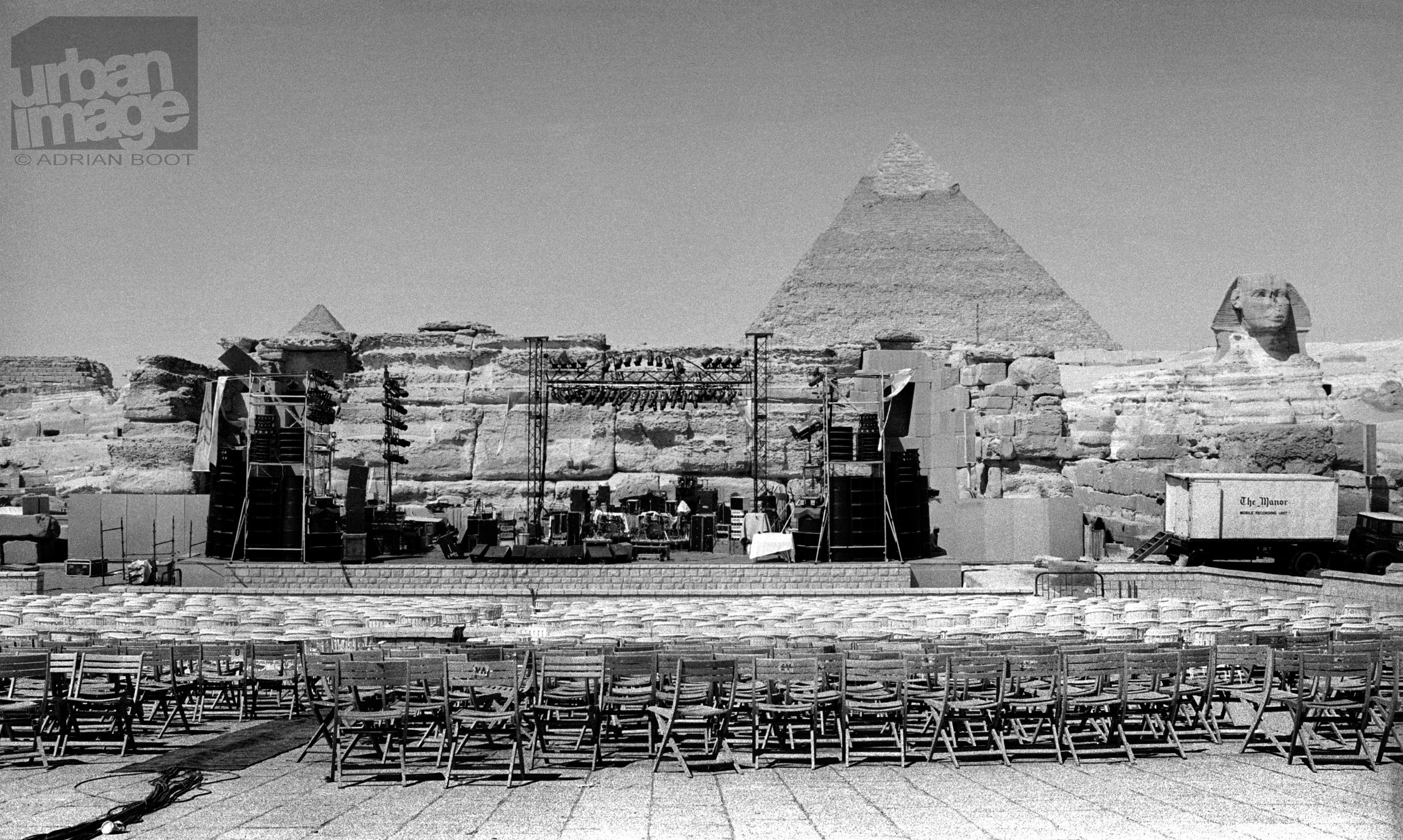 The Grateful Dead in Egypt – Backstage 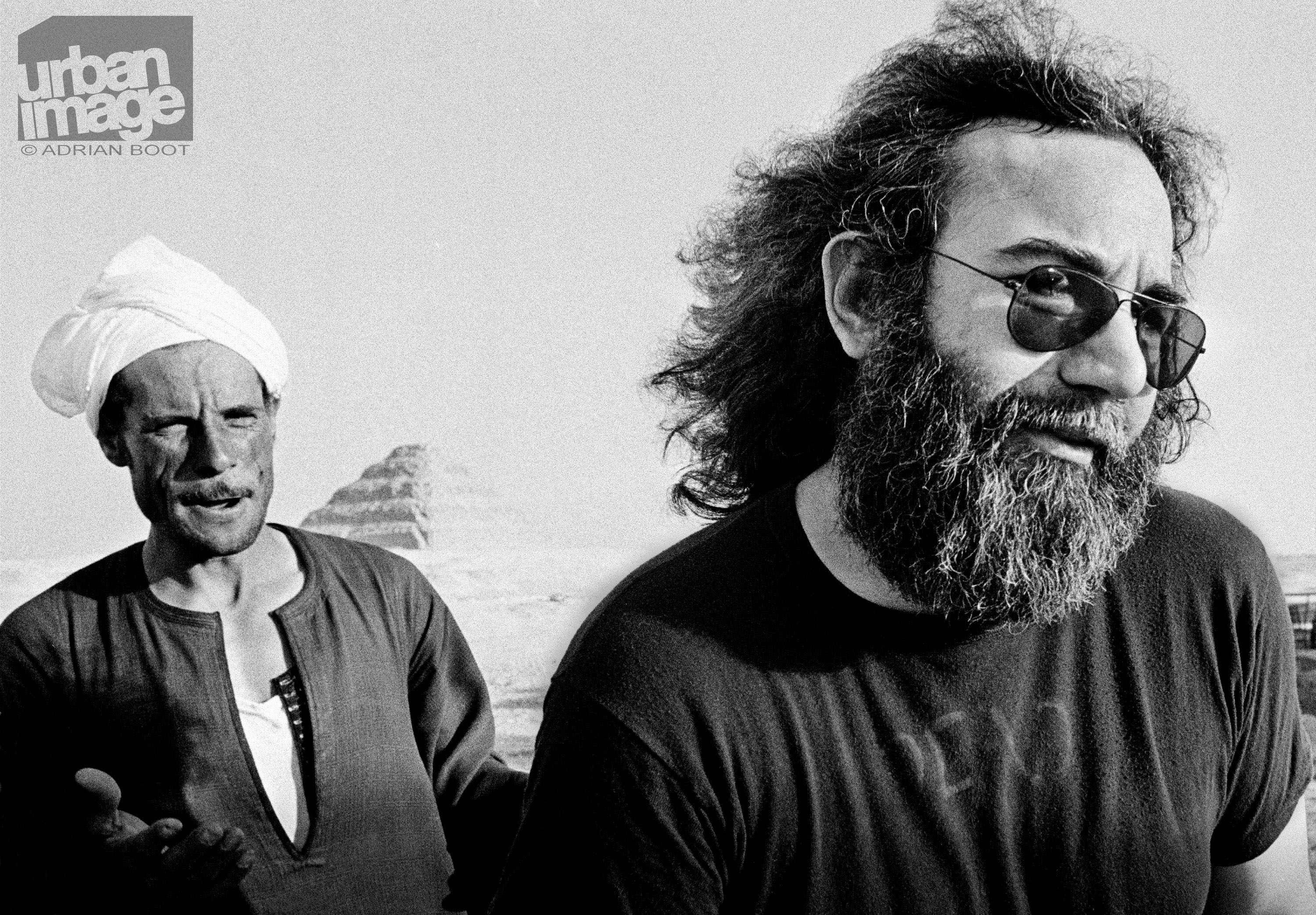 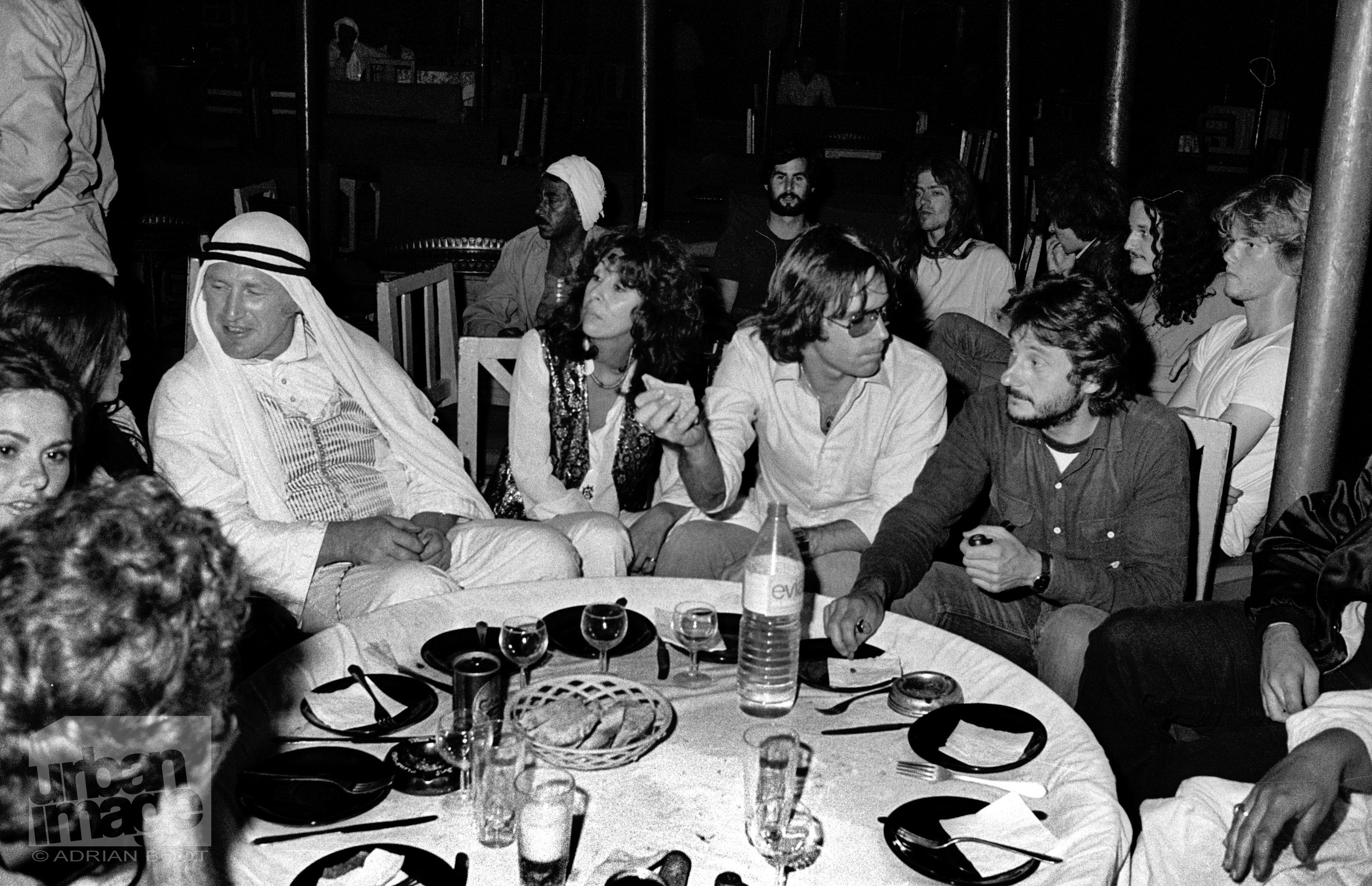 Over the next week I would bump into Ken Kesey distributing a specially procured liquid “Owsley” while cheering Mountain Girl and her horse racing with the local Bedouin. I followed the bundles of cables towards and into the the Great Cheops Pyramid only to find Bill Graham offering technical advice deep inside the Kings Chamber. Yesterdays performance had overloaded the local power grid and the locals were upset. The Deads production crew were having none of it, orders were orders, the bowels of the Pyramid were crucial. This elaborate complex of audio equipment set up at the center of the pyramid would provide the echo FX for the concerts, especially on the big night, eclipse night, this tomb embedded technology was going to help the ancient gods with the job of levitating the Pyramid on cue. 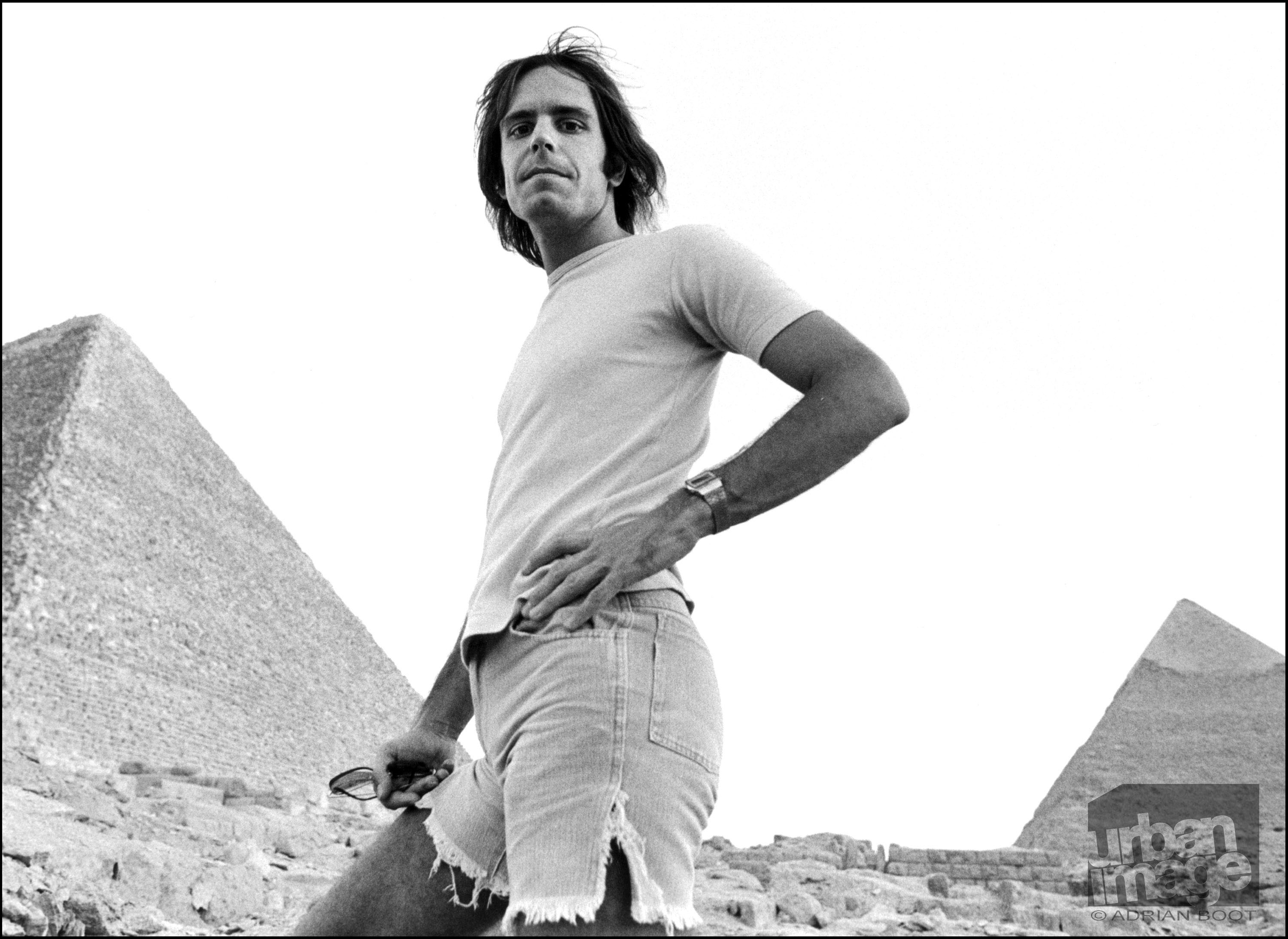 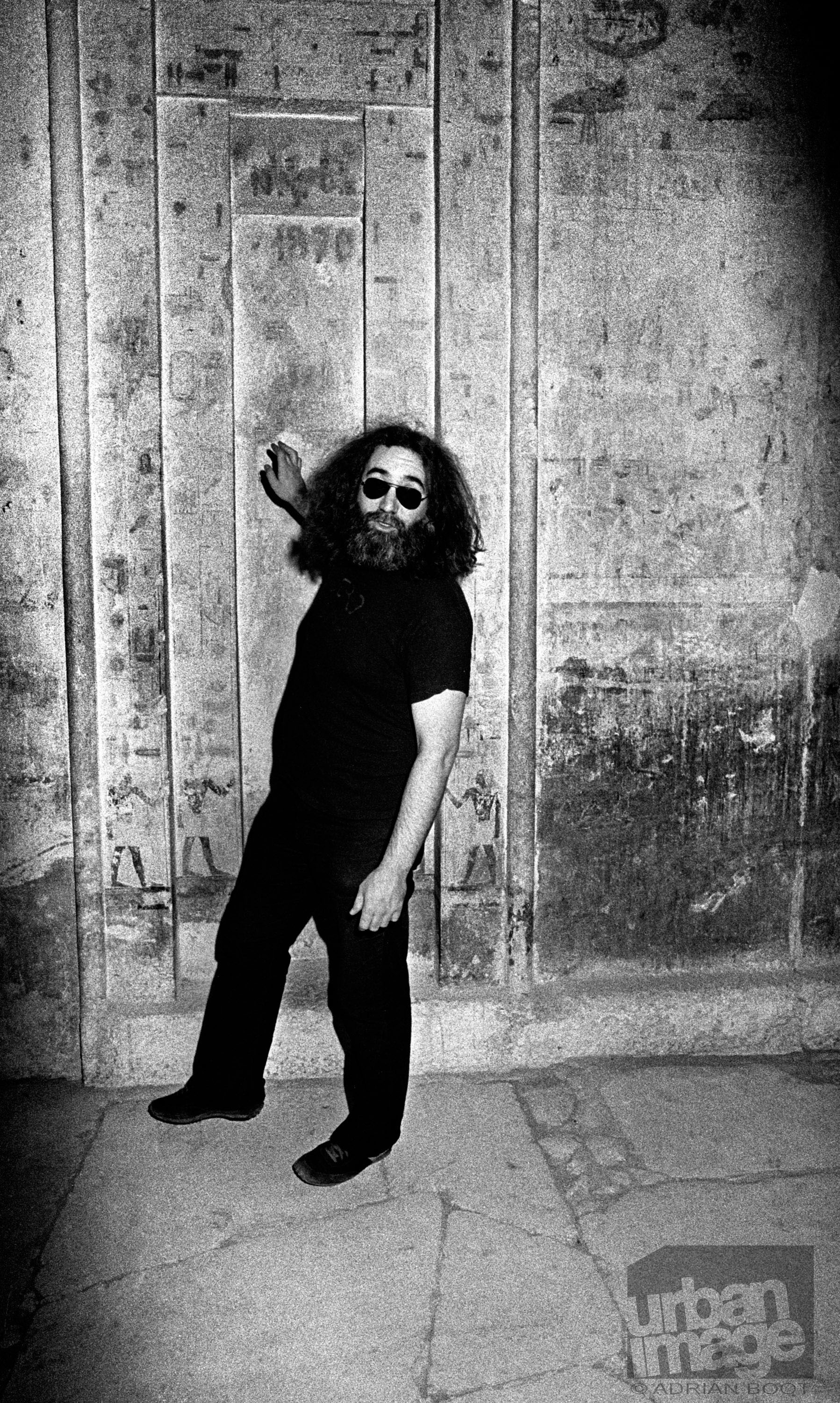 The big day was the 16th, the final concert enhanced with spectacular astronomical and anti gravity effects. This miraculous final show climaxed during a total lunar eclipse with the synchronicity of the signing of a peace treaty between Egypt and Israel. After the show Bill Graham leads a posse of camels and horses deep into the desert night towards a remote shanty nightclub called Sahara City for an after show feast and a spectacular dawn and sunrise. Shortly after sunrise, with the party still simmering, I left this surreal setting to catch a more conventional taxi ride to the airport and a gray damp punky London. I passed the great Jerry Garcia as I left and called out that I didn’t see any Pyramids levitate. He replied suggesting that I wasn’t paying attention, I was busy with my photography. 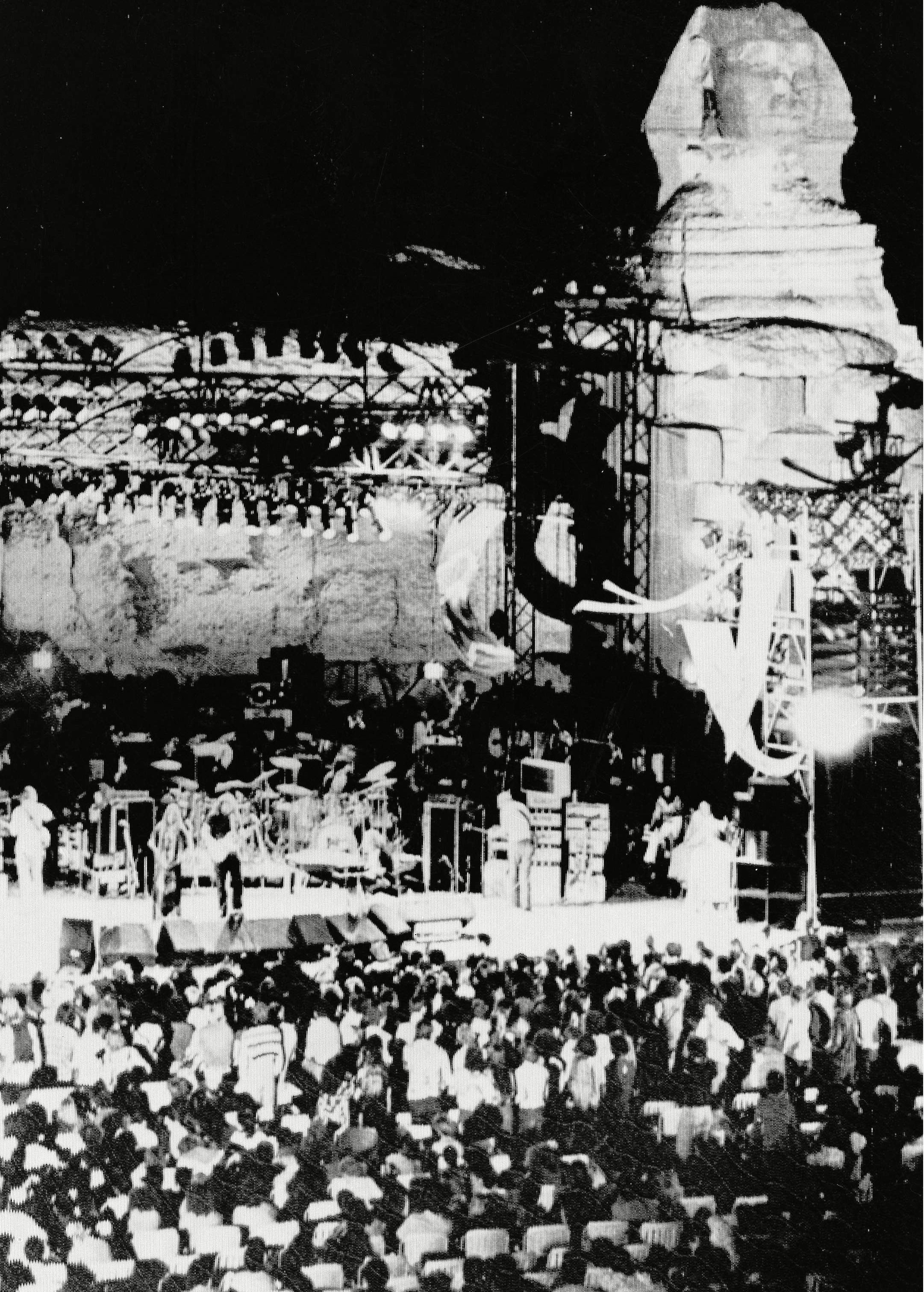