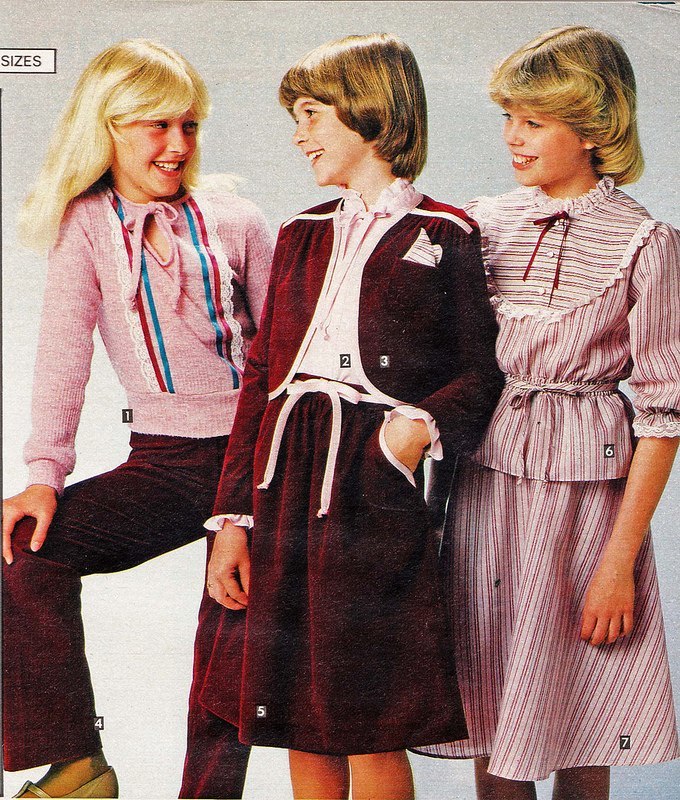 Is the girl on the right forty years old? No, she’s probably twelve…. young girls just dressed like older women in 1979.

I’ve scanned a few pages from the 1979 Sears Catalog – focusing on the junior girls section. Perhaps it wasn’t the high water mark in the history of fashion, but it’s still an interesting tour through what was hanging on racks when Mork and Shaun Cassidy were kings.

Speaking of Mork and Shaun….. 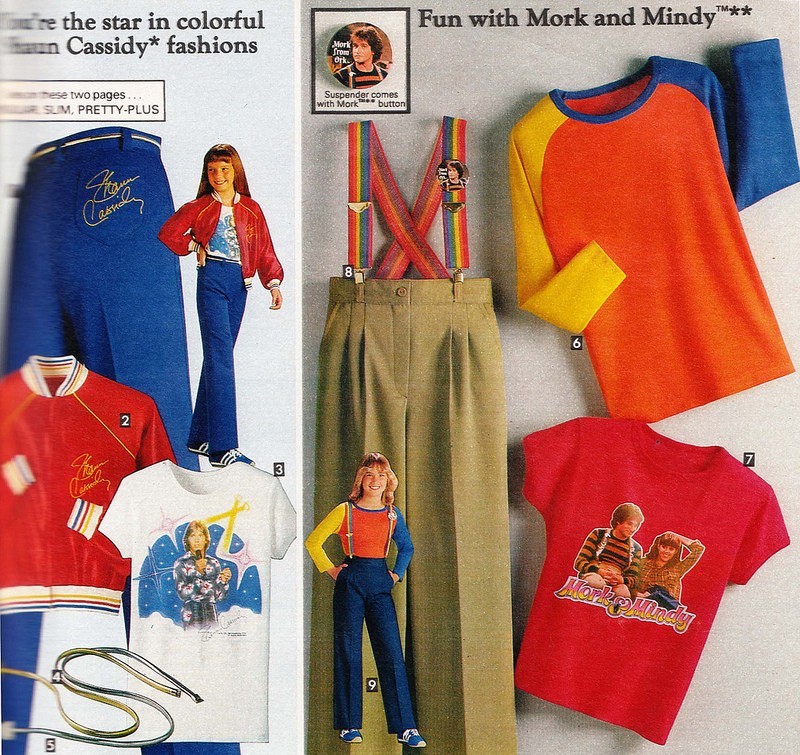 Do you find it a tiny bit odd that they are marketing the Mork shirt and pants to girls?

It wasn’t long before ’79 that iron-ons became popular. Before then, t-shirts didn’t feature a picture or design….. ever. Interesting fact: When the director/writer of Mad Men (Matthew Weiner) wanted Don Draper’s wife to wear a Disneyland t-shirt, he found they didn’t make them in 1968. So, then he looked for any t-shirt with a picture on it, and came up empty. Finally, he found an old photograph of Sharon Tate wearing a t-shirt with a star on it, so he went with that.

This is inconceivable nowadays where every t-shirt is a walking advertisement (or worse, a self-declaration of uber coolness with something “ironic” on the front). 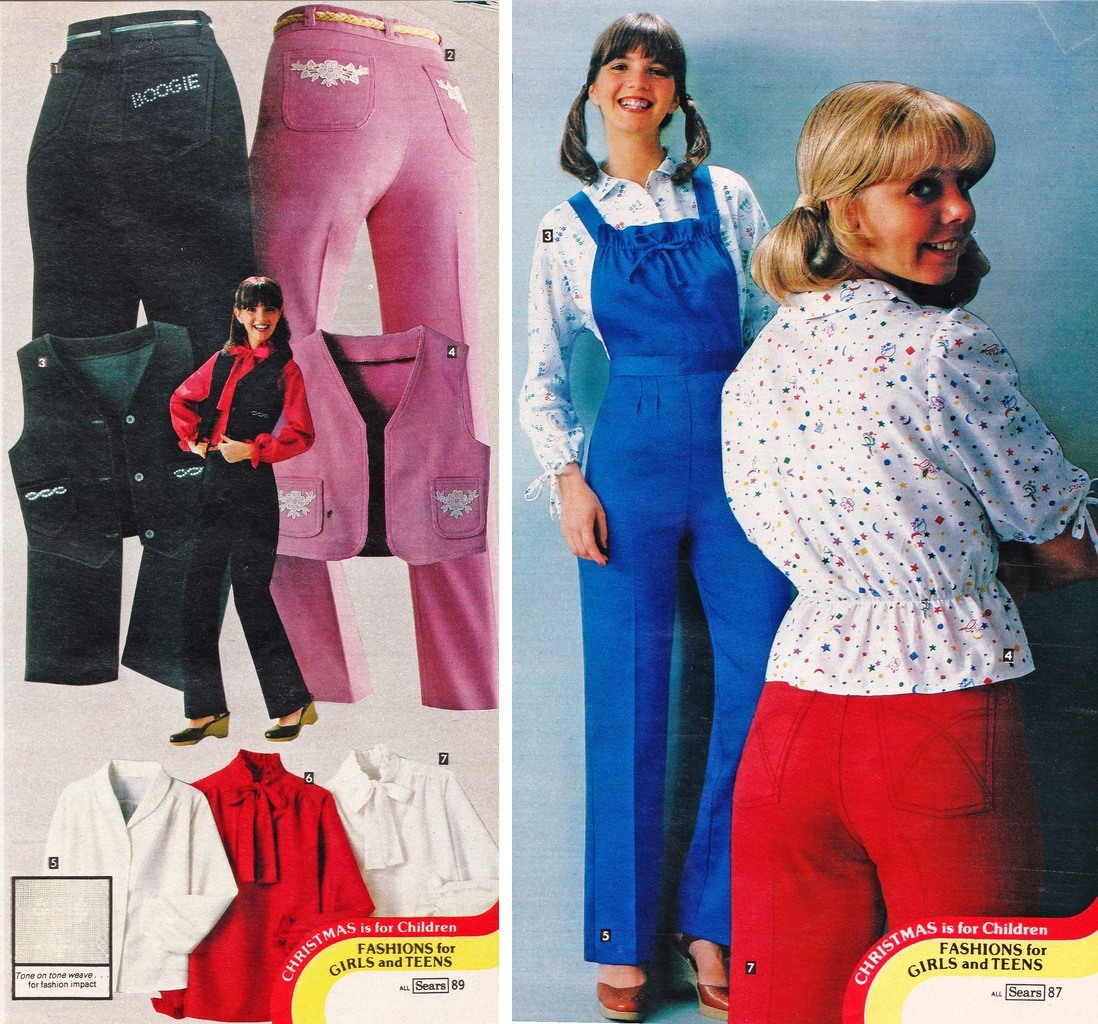 I could go on and on about the pocket bedazzlement fad of the late Seventies….. in fact, I already have.  Read an entire article on the matter and become an expert. 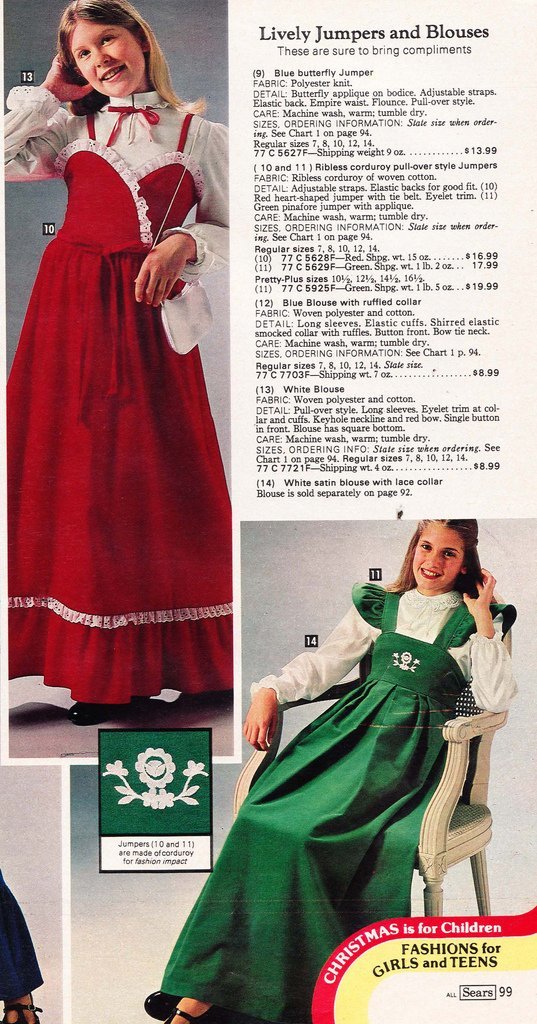 These dresses literally could have been worn on Little House on the Prairie and fit right in.  1979-1980 was a very unfeminine time in fashion. I’m not saying they looked boyish, I mean they weren’t flattering in a feminine way (if that makes sense). 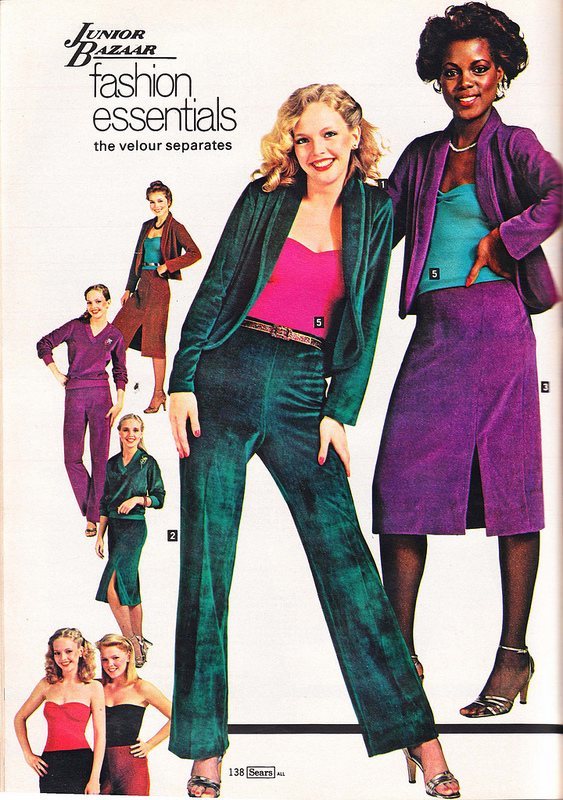 Damn these clothes made girls look old! And say what you want about velour, but nothing beat swishing your hands up and down the fabric. Made for hours of enjoyment in the classroom. 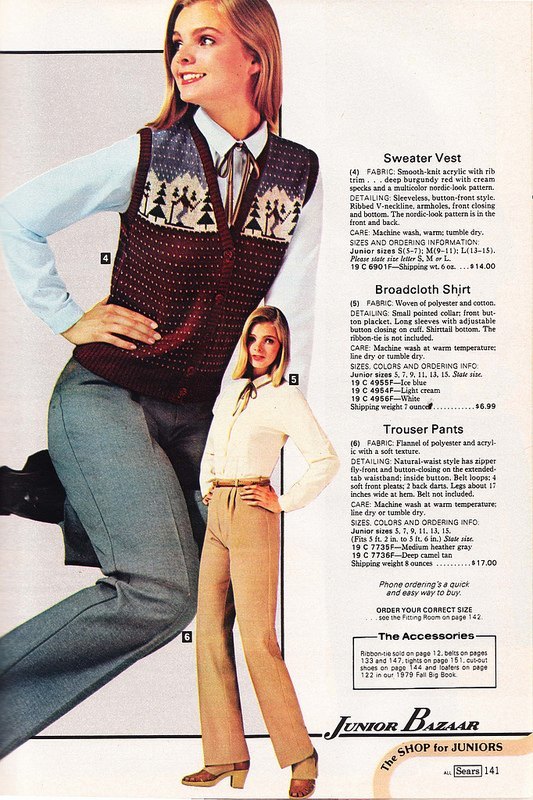 If I described slacks for girls in 1979 as “high waisted” that’d be a pretty fair statement, wouldn’t you say? Of course, you could argue that those aren’t high-waisted pants. The pants everyone wears today are low-waisted.  Indeed, that’s actually where a person’s waist really is – not down around your pelvic bone. 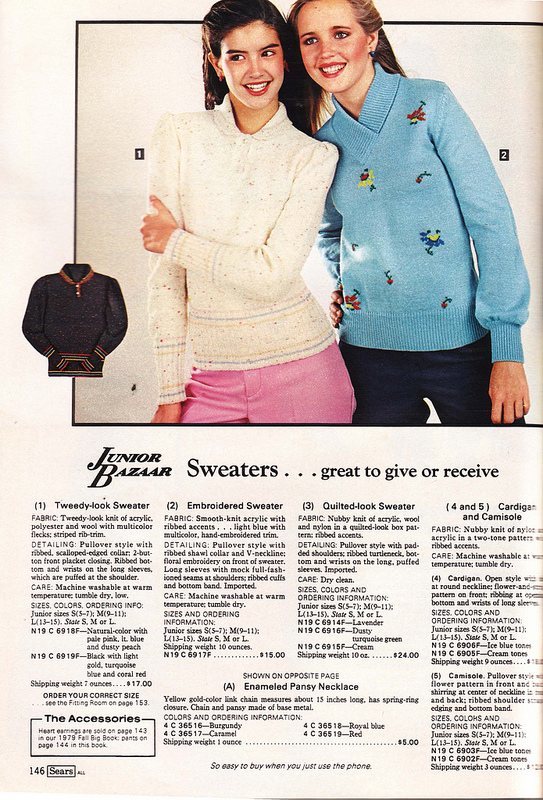 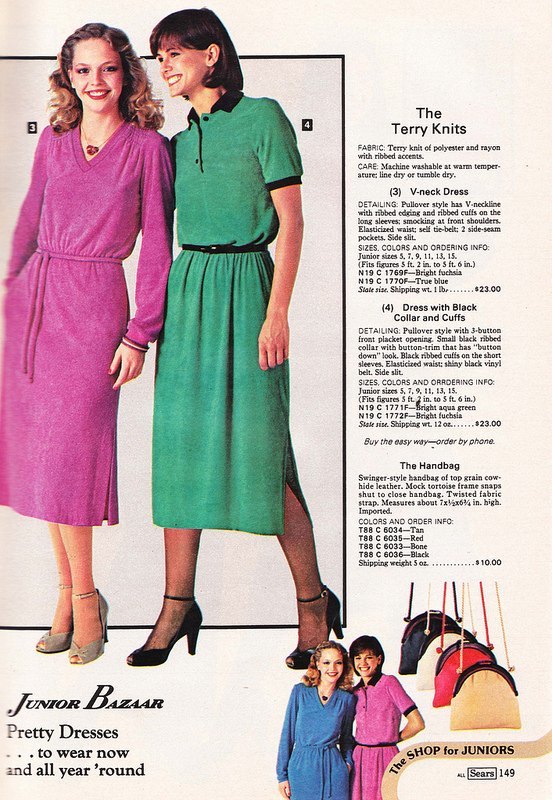 Another future actress sighting: that’s Melinda Culea of the A-Team in the green dress.

It should be noted that the late Seventies were indeed the glory days of Terry Cloth.  They weren’t just for towels anymore. 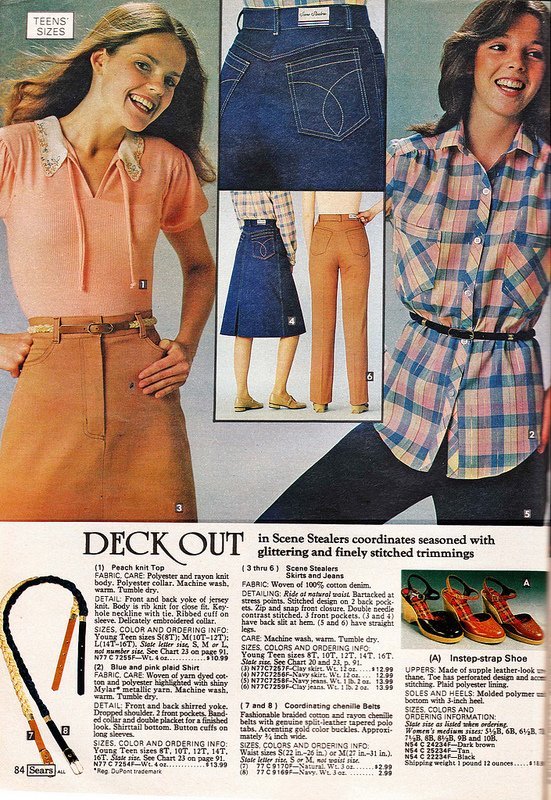 The girl on the right has the Kristy McNichol hairstyle down solid. Bravo. 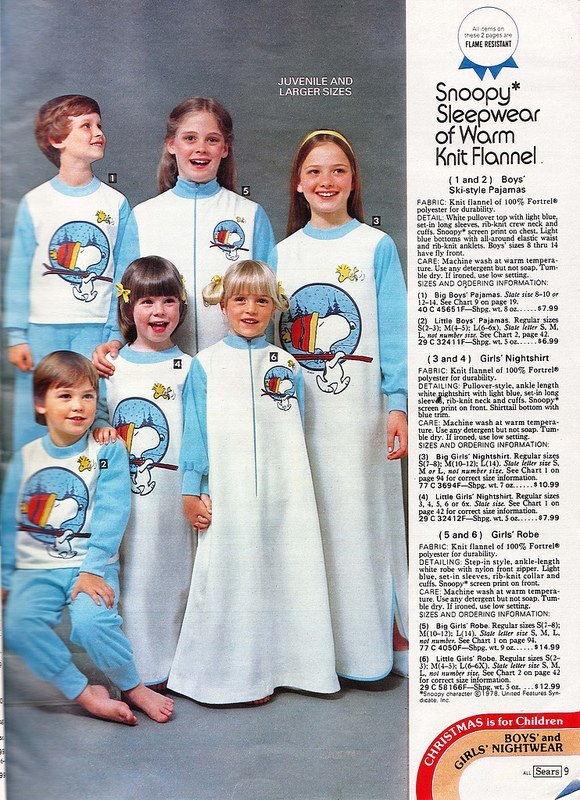 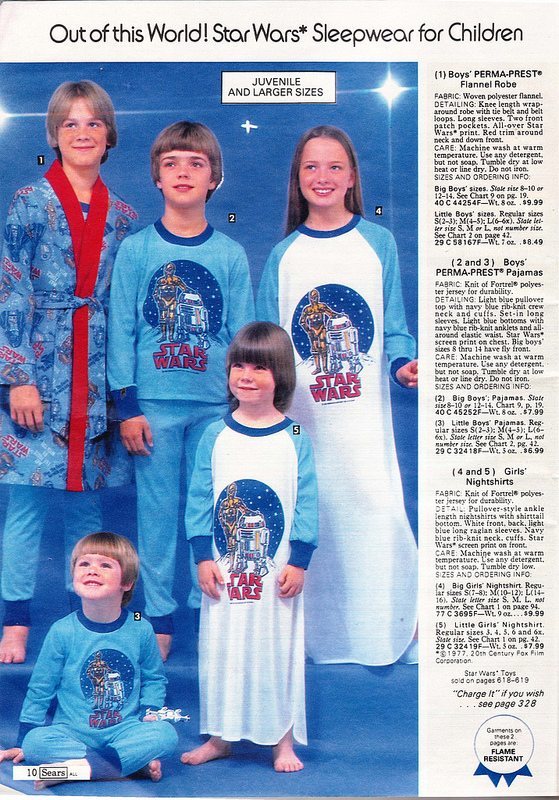 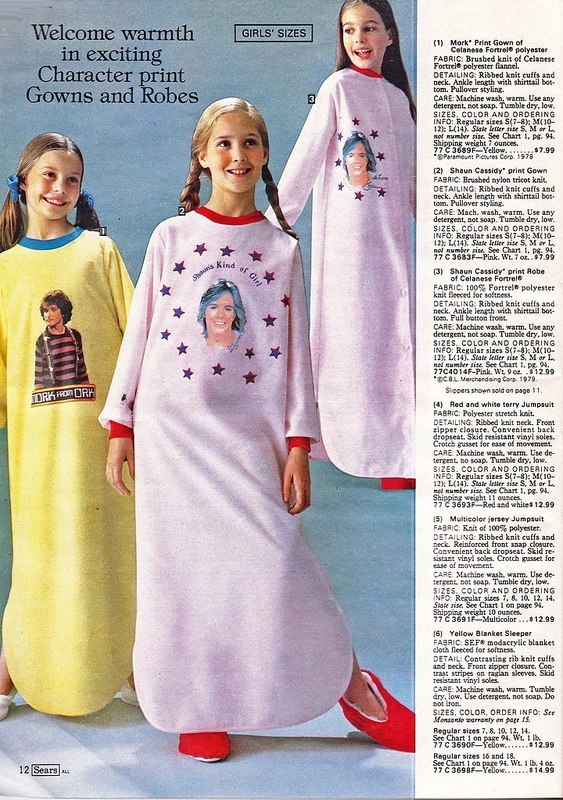