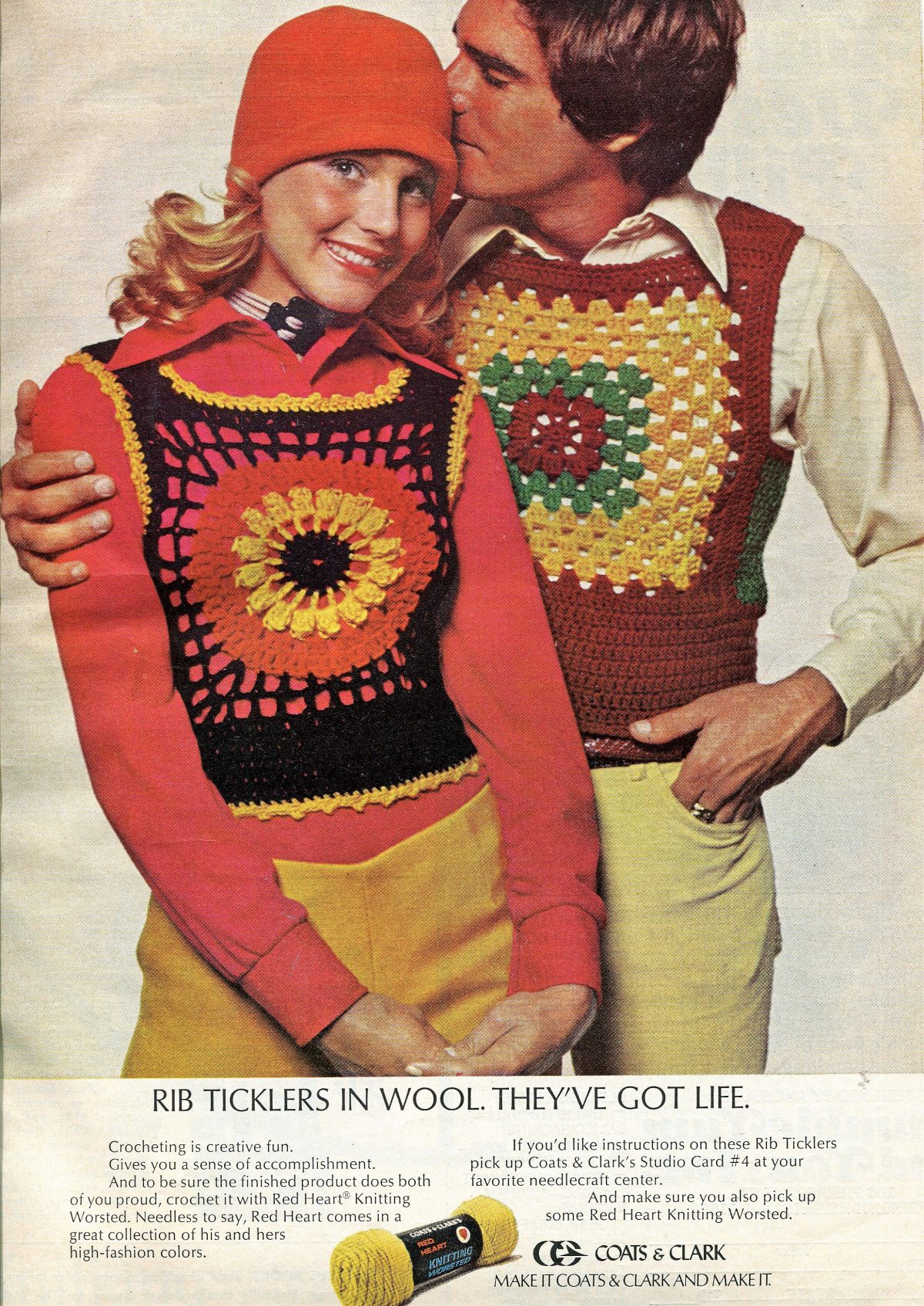 I don’t think people these days appreciate the level of DIY fashion in the 1960s and 1970s.  Women back then knew how to sew and magically make stuff out of balls of yarn – it was a required skill since time immemorial.  Then, seemingly overnight, it became a lost art.  I suppose the Baby Boomers didn’t feel it was a useful skill for “the modern girl” and neglected to pass it on to the next generation.

Well, this is where Flashbak comes in, bringing back remnants of that archaic practice for modern eyes.  Behold – DIY fashion advertising…. 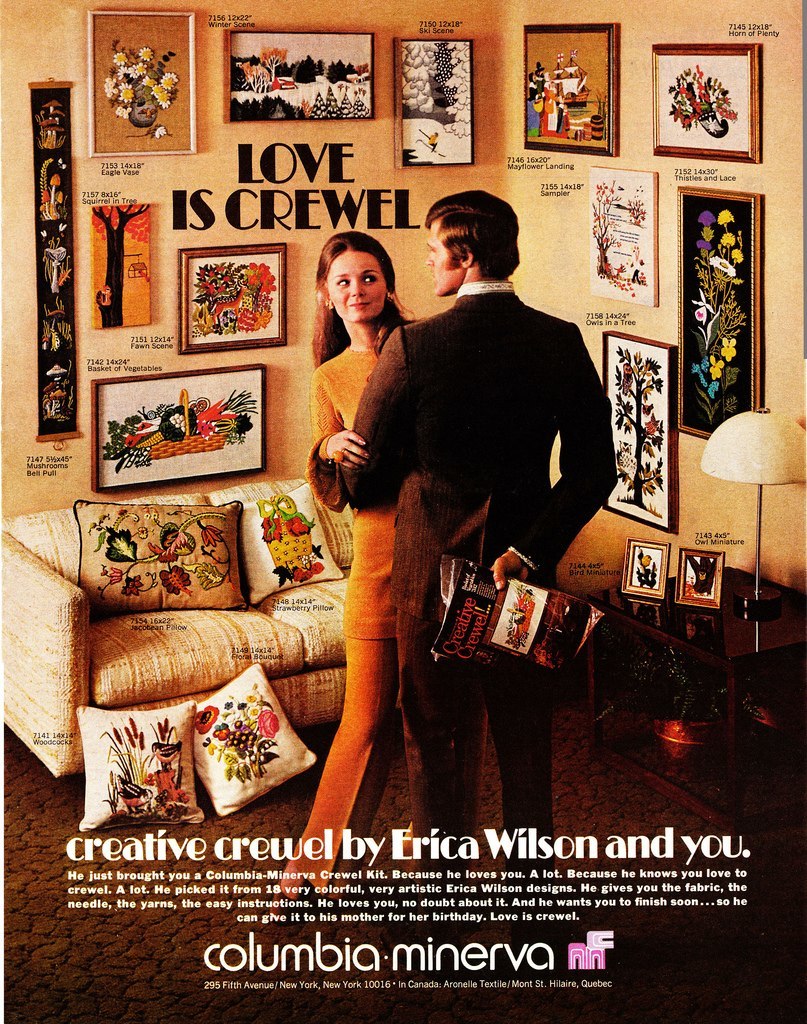 It looks like this dude is ready to beat the hell out of this girl…. ah, but it’s a joke. “Crewel” sounds like “cruel”…. get it? Thankfully, they didn’t give her a black eye and a bloody lip to send the joke home. 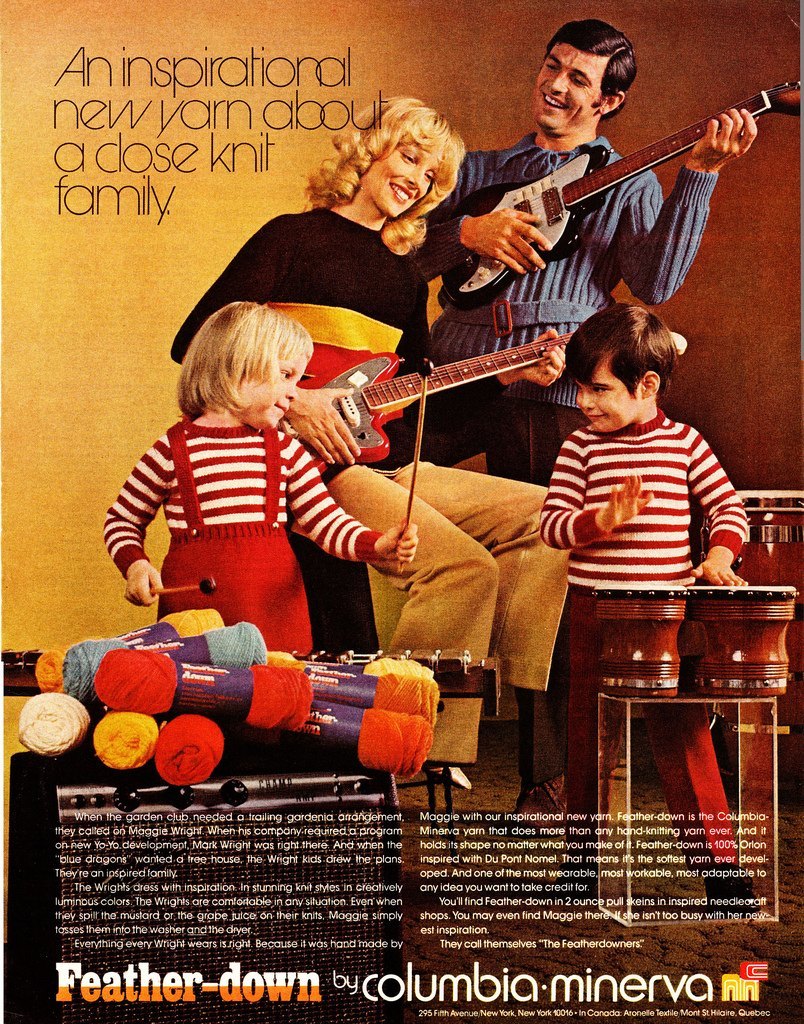 I’ll be honest.. fellas, it was sounding great. But.. I could’ve used a little more cowbell. So.. let’s take it again. 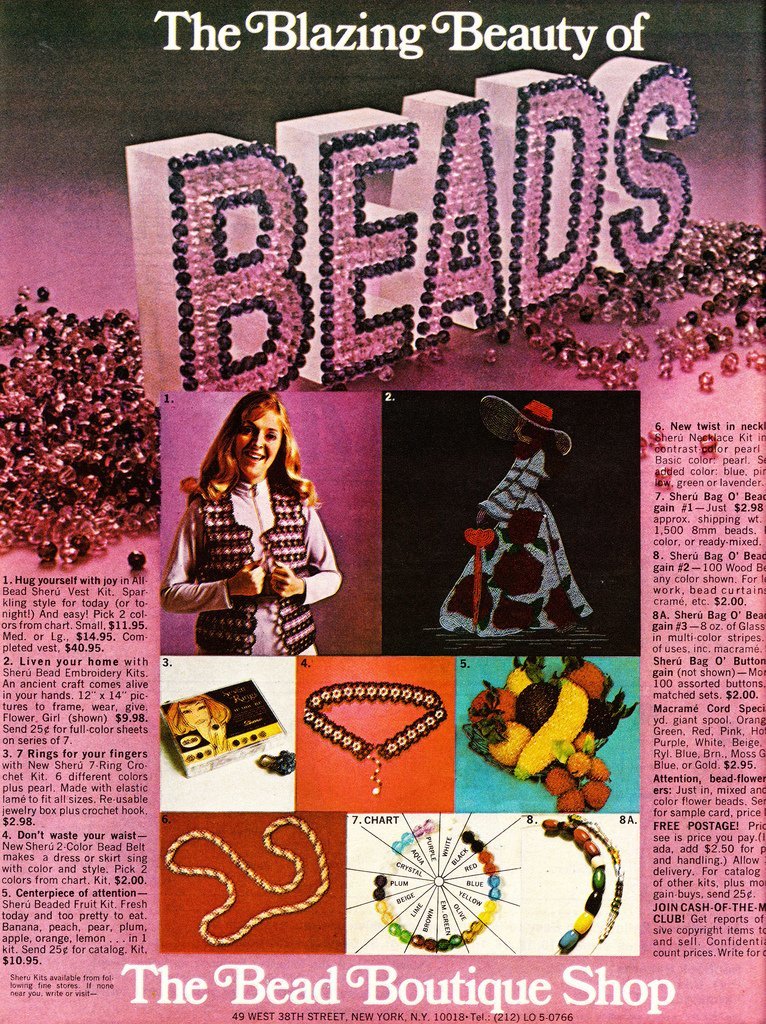 How can I comment on this, other than to note that the single greatest headline for an ad I have ever read, “The Blazing Beauty of Beads”, is followed up by some of the most boring “unblazing” examples imaginable: a chart, a clump of fruit, and a vest? 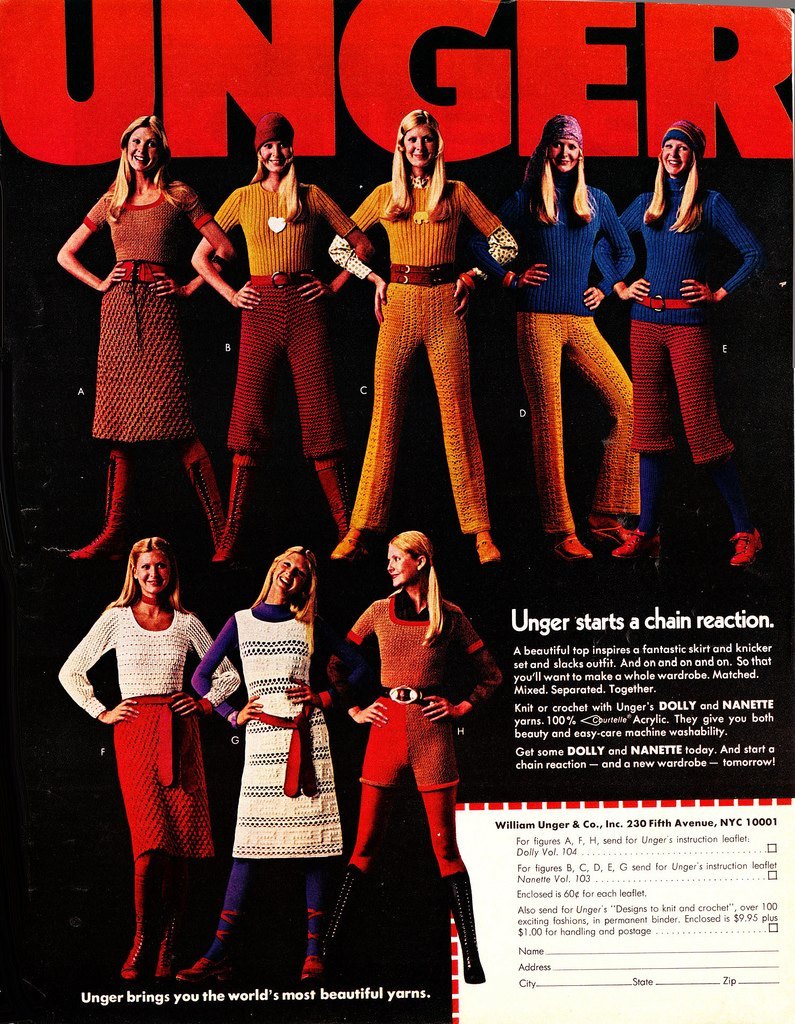 The fine print reads: Warning: These fashions are only considered acceptable attire in certain remote regions of Finland. 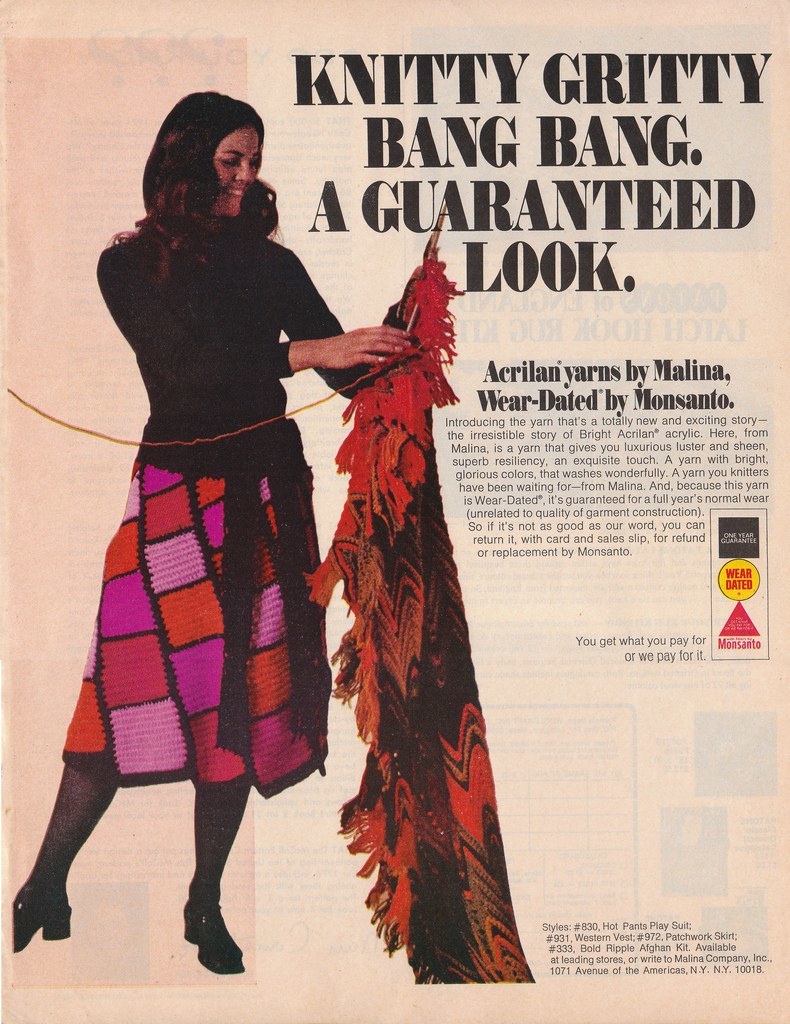 Ahem. Last I checked, the Knitty Gritty Bang Bang was not a yarn, but rather something you did in the back of a van. I’m just sayin’. 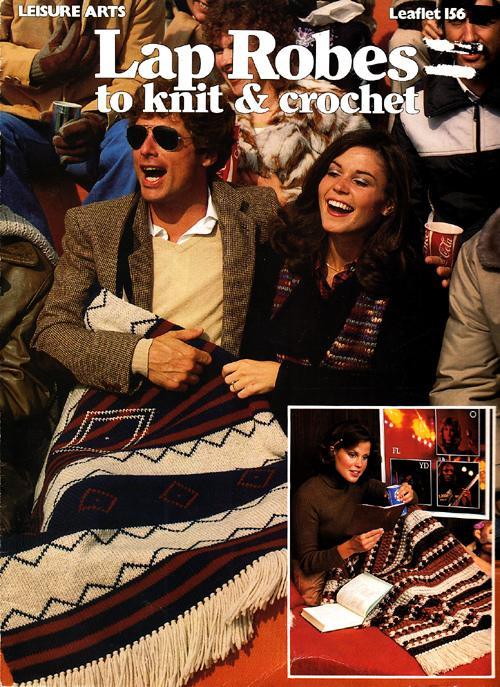 Lap robes are fine, but they’ve got nothing on the Snuggie. One of the rare occasions  where the modern era trumps the vintage. 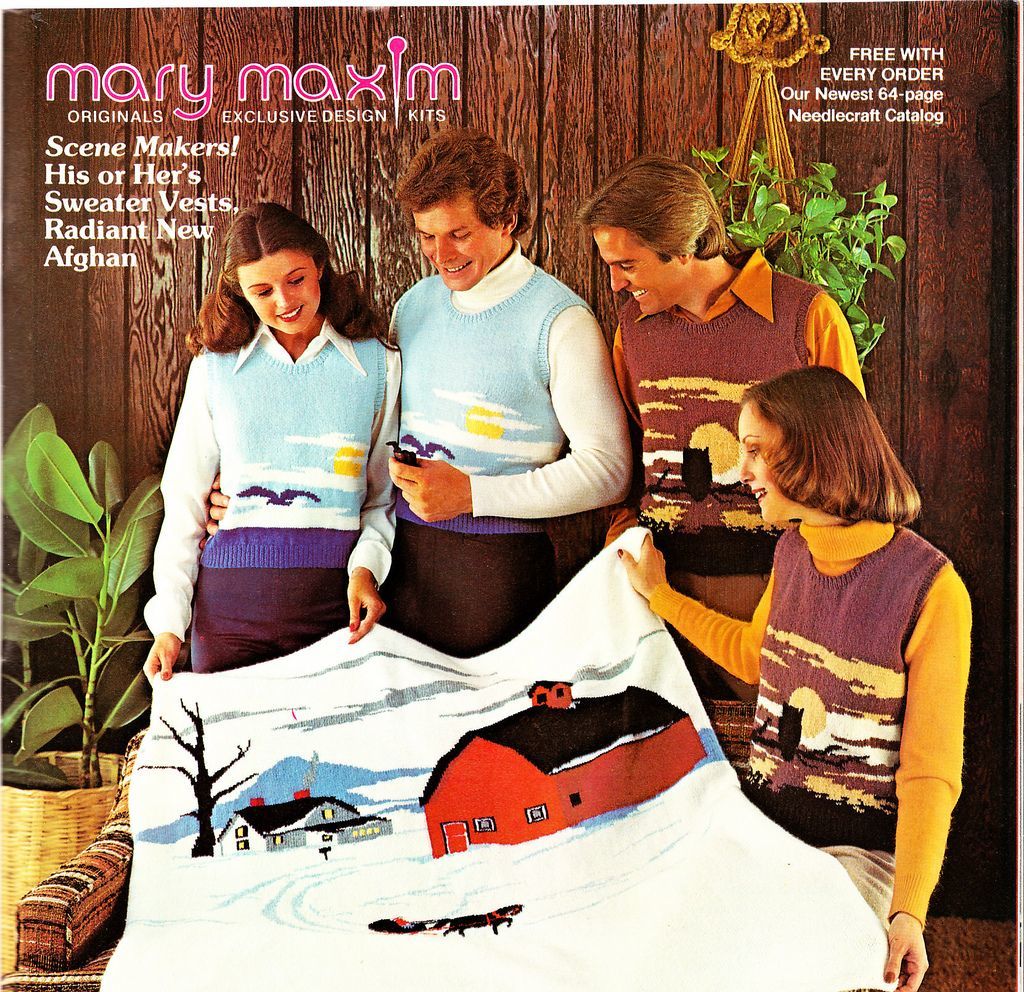 These are nice, but next I want his and her sweater vests with dystopian scenes of urban decay. 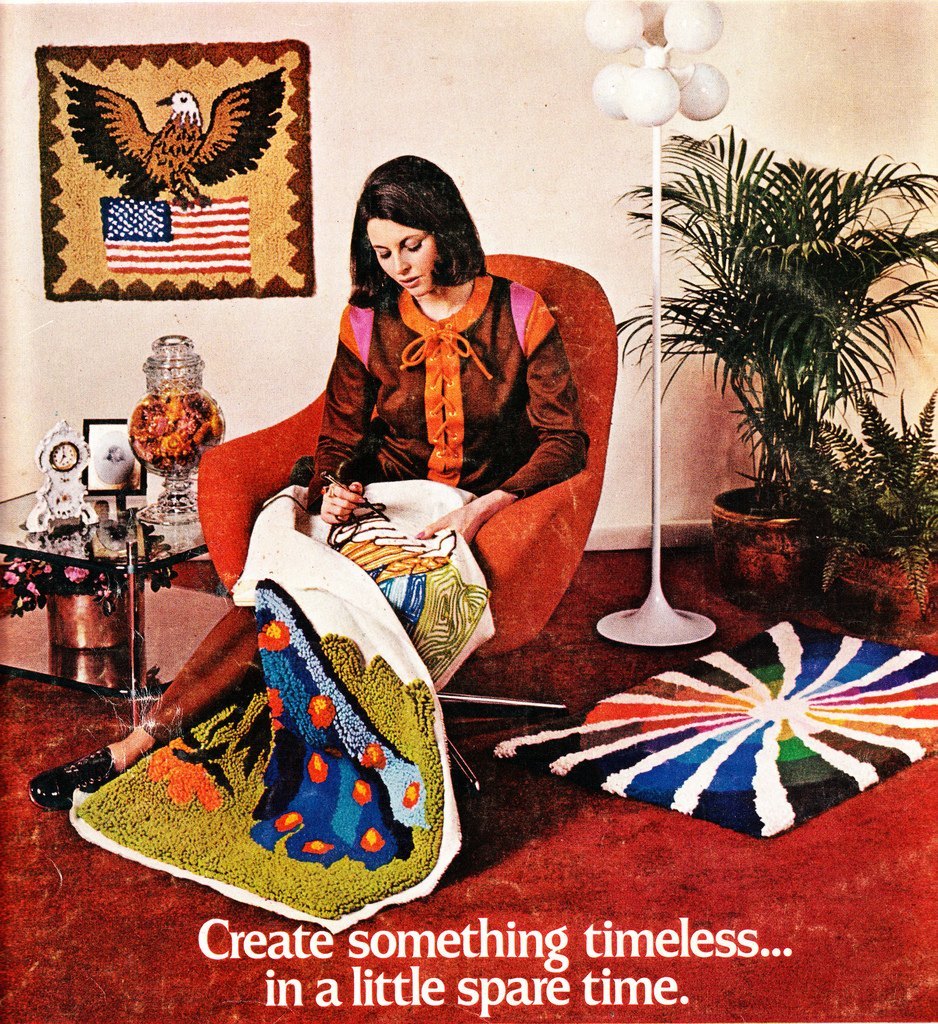 I love the incorporation of the cool hippie slang of the day into a macrame advert: “made in the suede”, “the what’s your bag”, “do your thing” 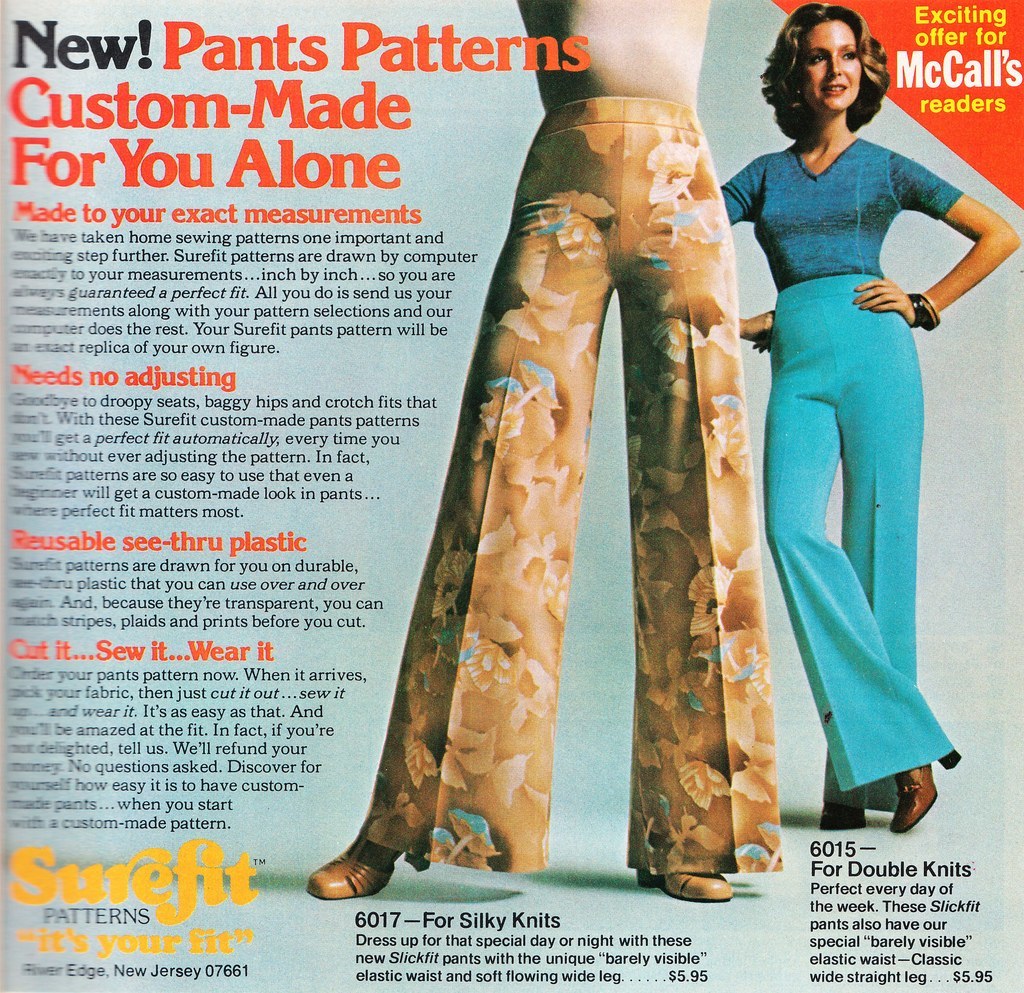 Oscar Wilde once said “Fashion is a form of ugliness so intolerable that we have to alter it every six months.”   I think that statement applies particularly well to flared Seventies DIY slacks. 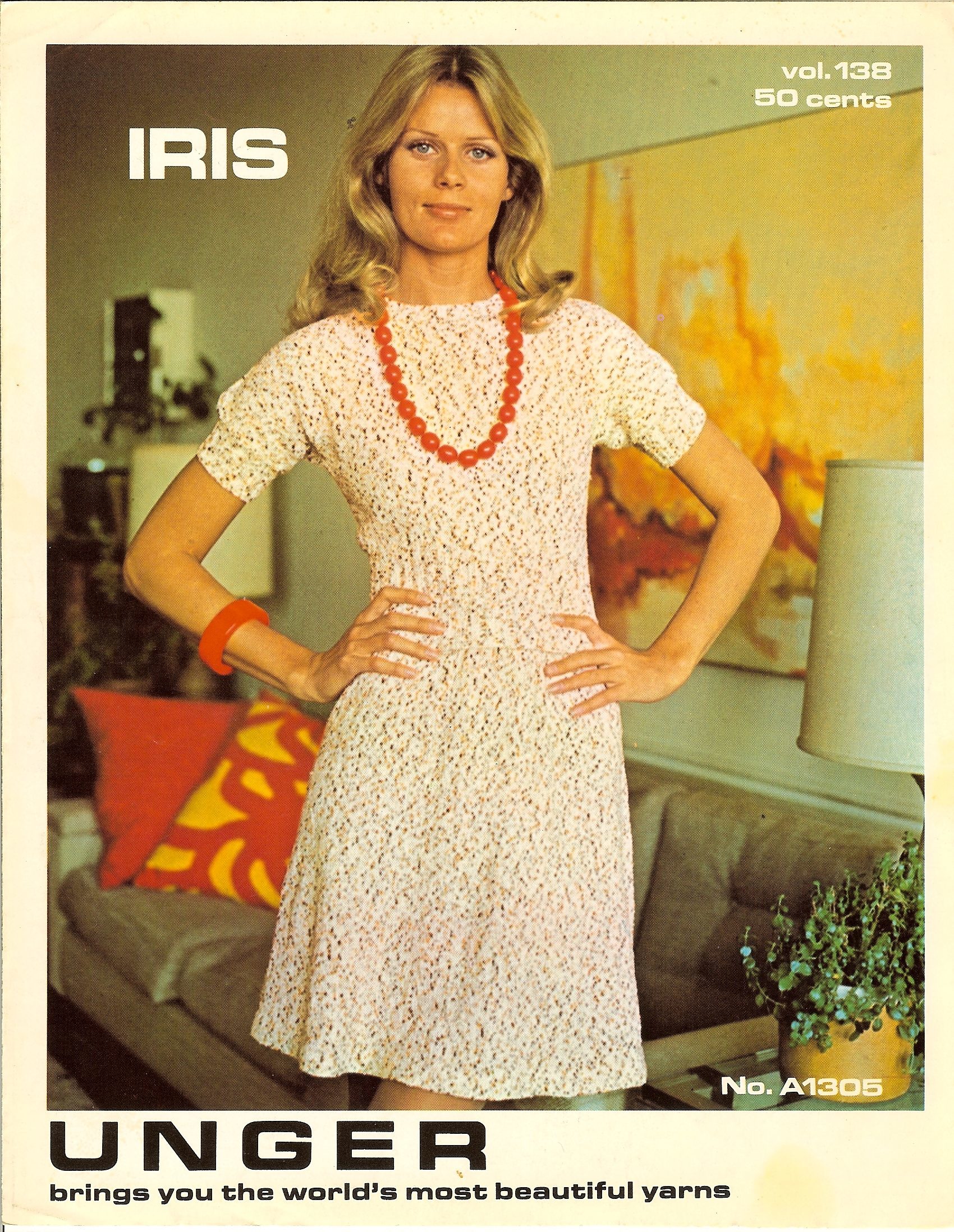 She definitely has a Loretta Switt vibe going here. 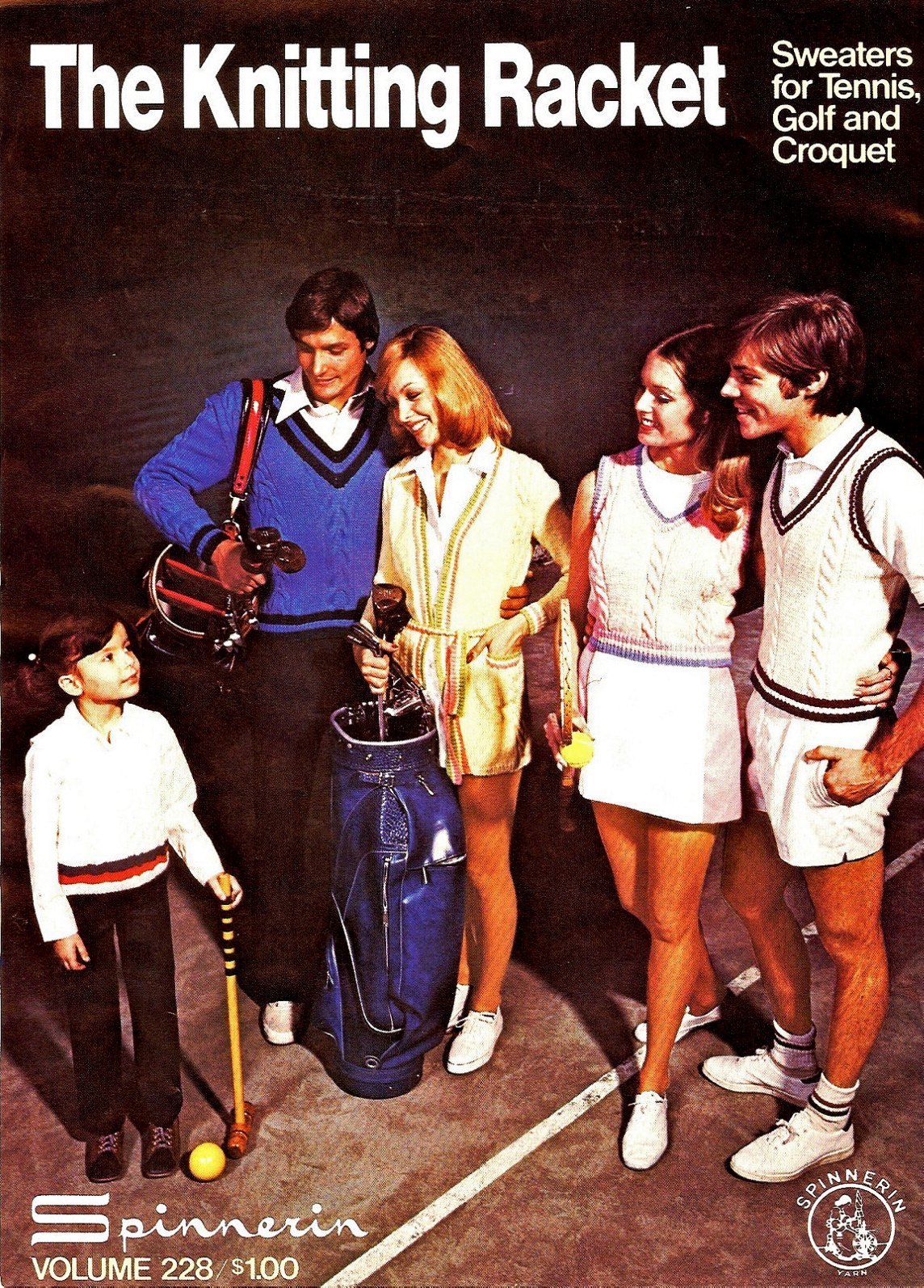 The little girl is clearly asking, “What in the f**k is everyone looking at me for?” 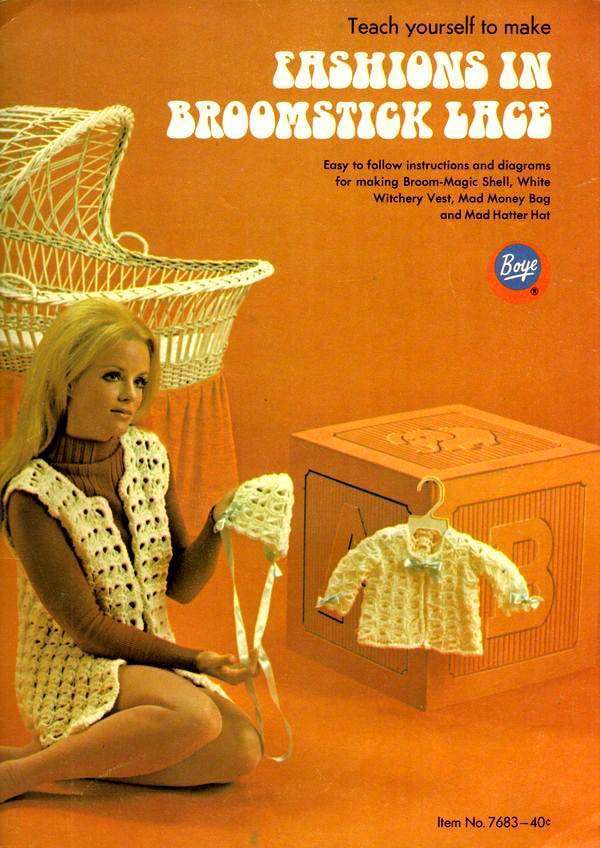 I think she’s trying to tell you she’s pregnant.  You have to pick up on the subtle clues. 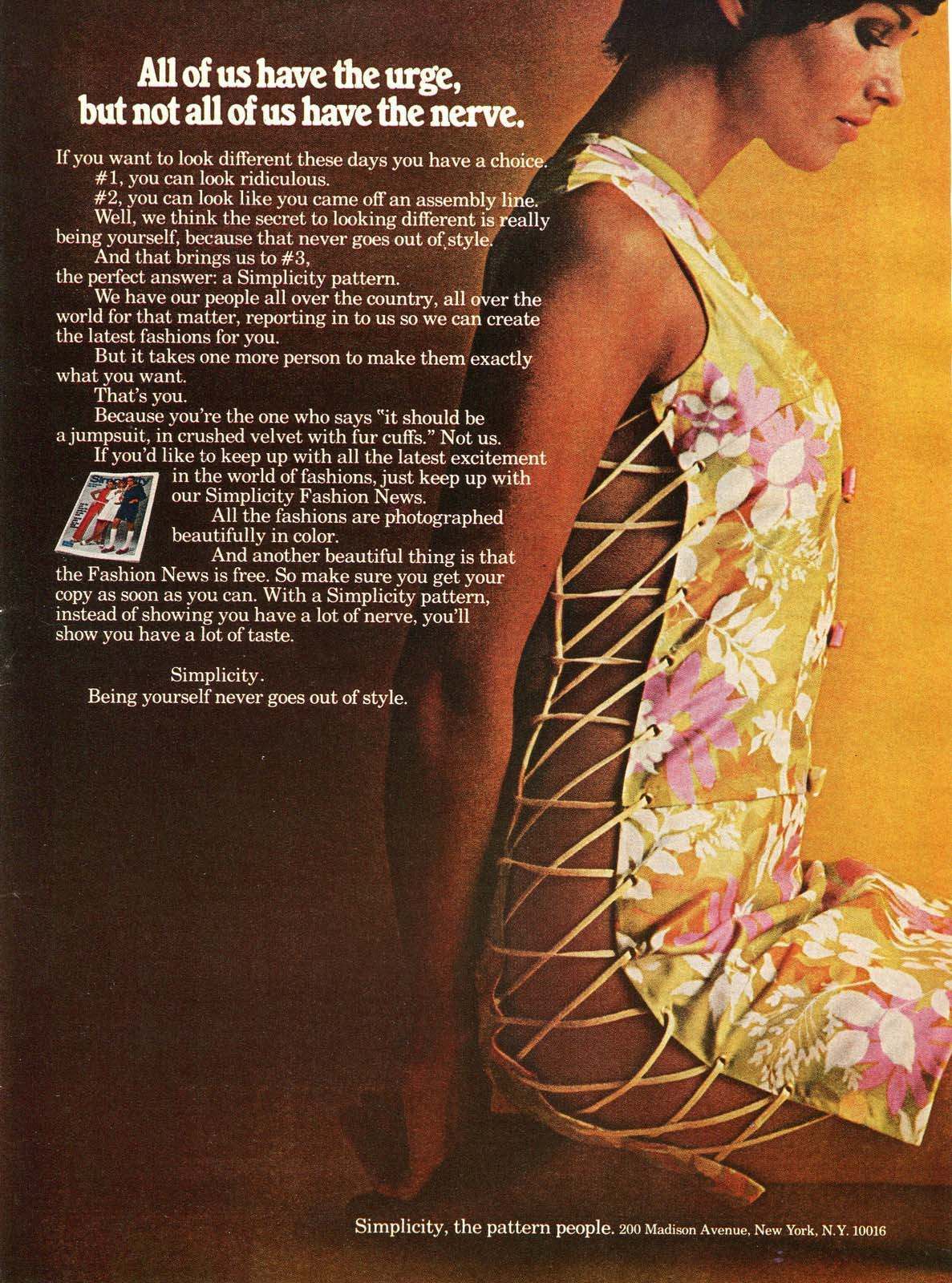 I couldn’t agree more.  All ladies should dress like this.  It’s an expression of the real “you”. 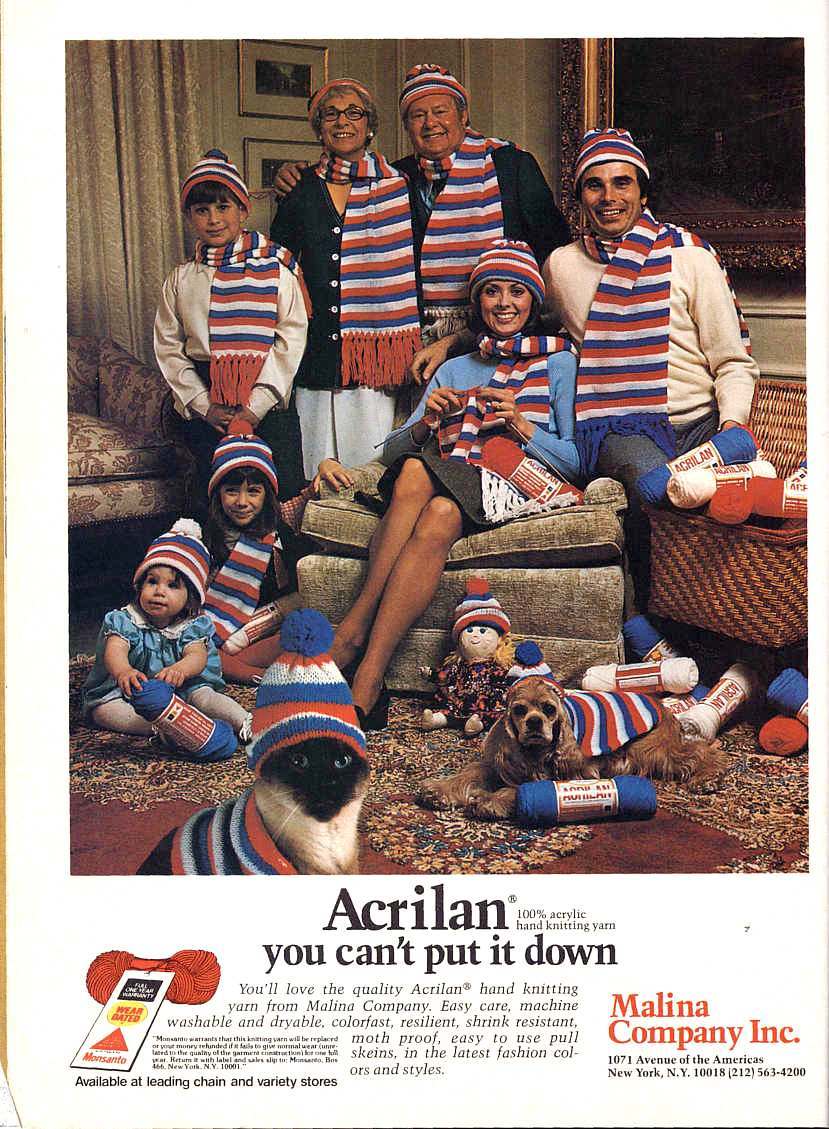 The cat is not amused. 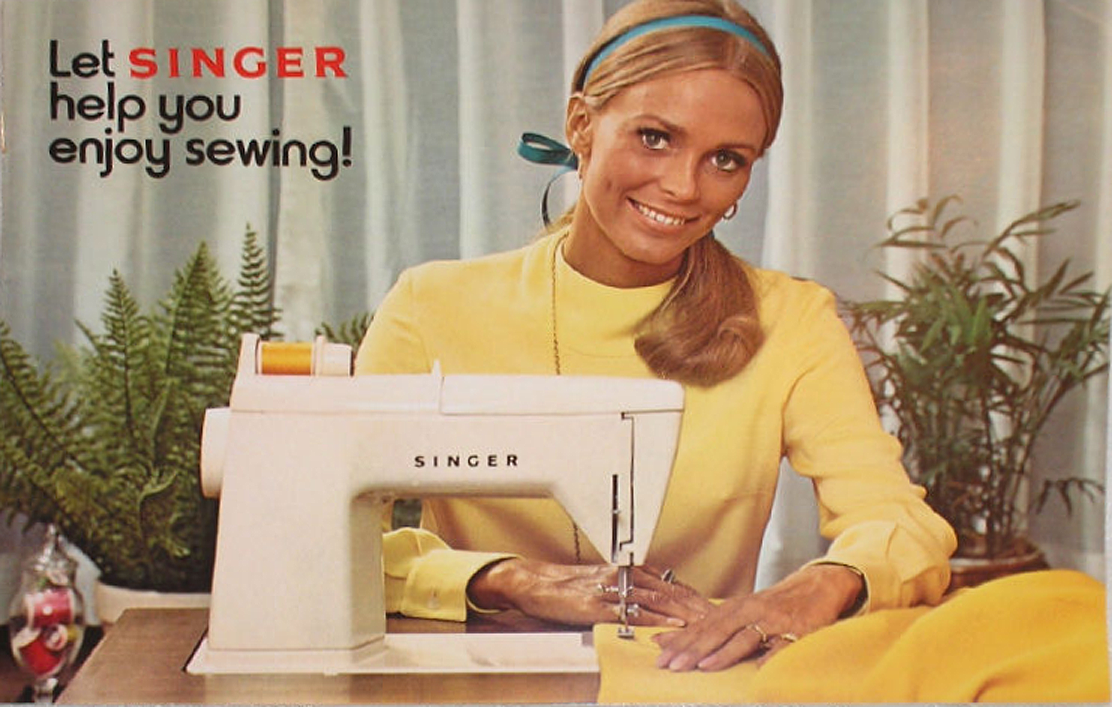