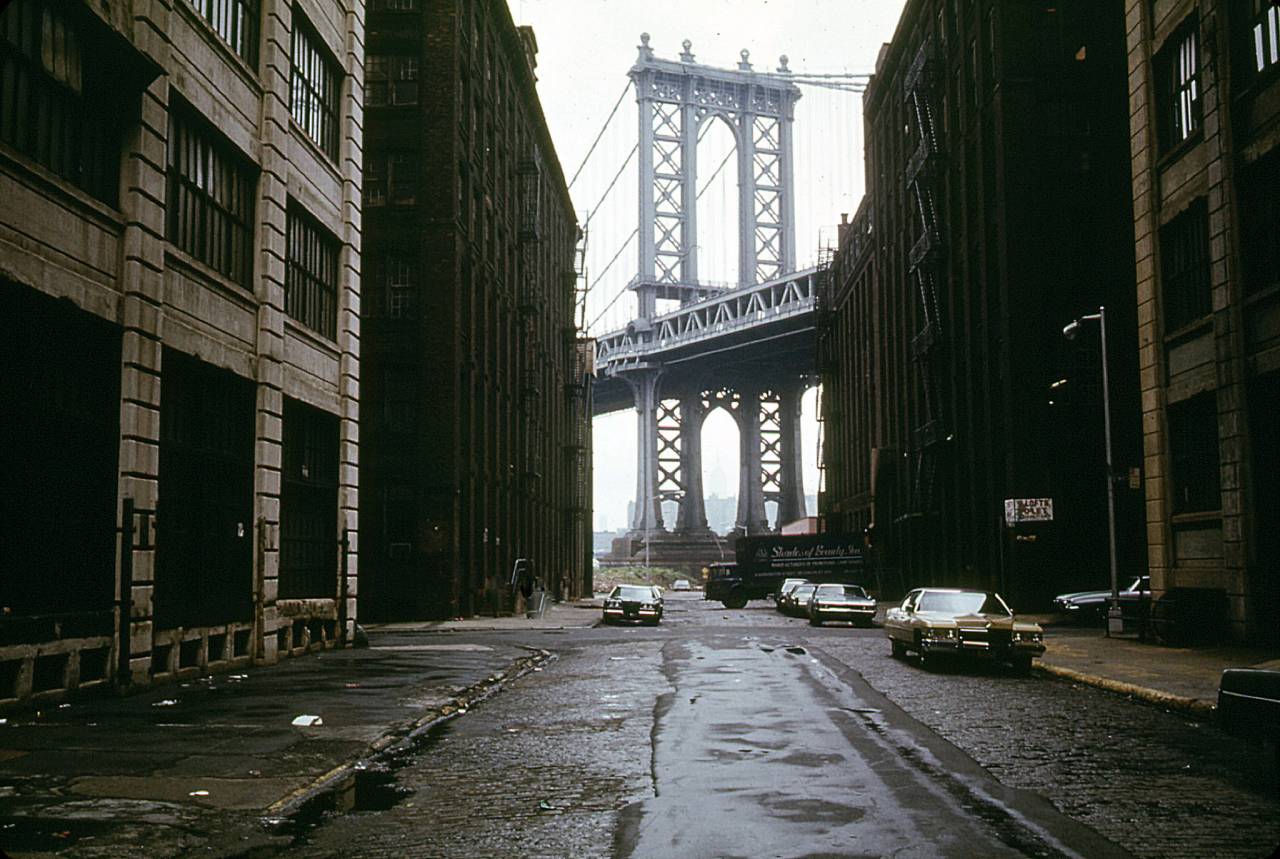 These photographs are from Andy Blair’s great Flickr site. Where he had hundreds of extraordinary pictures of a New York. At one point he includes a quote from a book about 1960s and 70s New York called “The Ungovernable City” by Vincent J Cannato…

Stabbings, robberies, muggings, graffiti, arson and rape began to strike a wider and wider portion of the population. Burglaries made people feel vulnerable, even in their once-safe homes and apartments. It wasn’t just the reality of crime and sense of broadening disorder that hurt. It was the raw fear and perception of vulnerability that seeped into every interaction of daily life…. 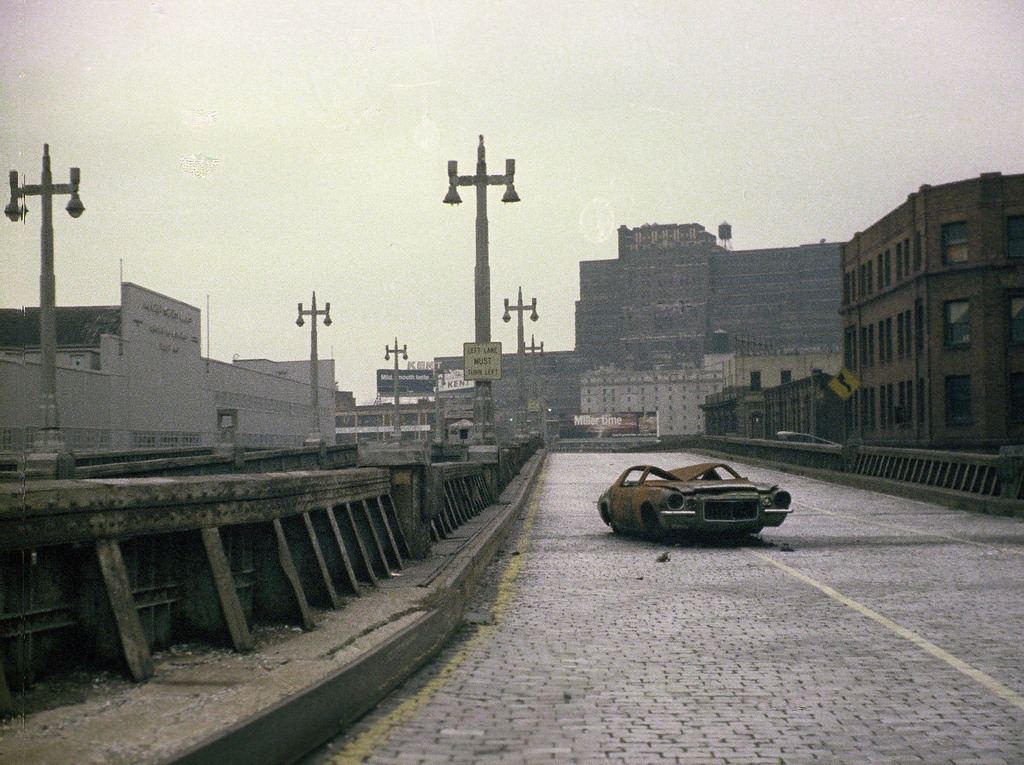 The abandoned West Side Highway with a stolen and burned out 1970s Chevy Camaro. March 1975. New York. 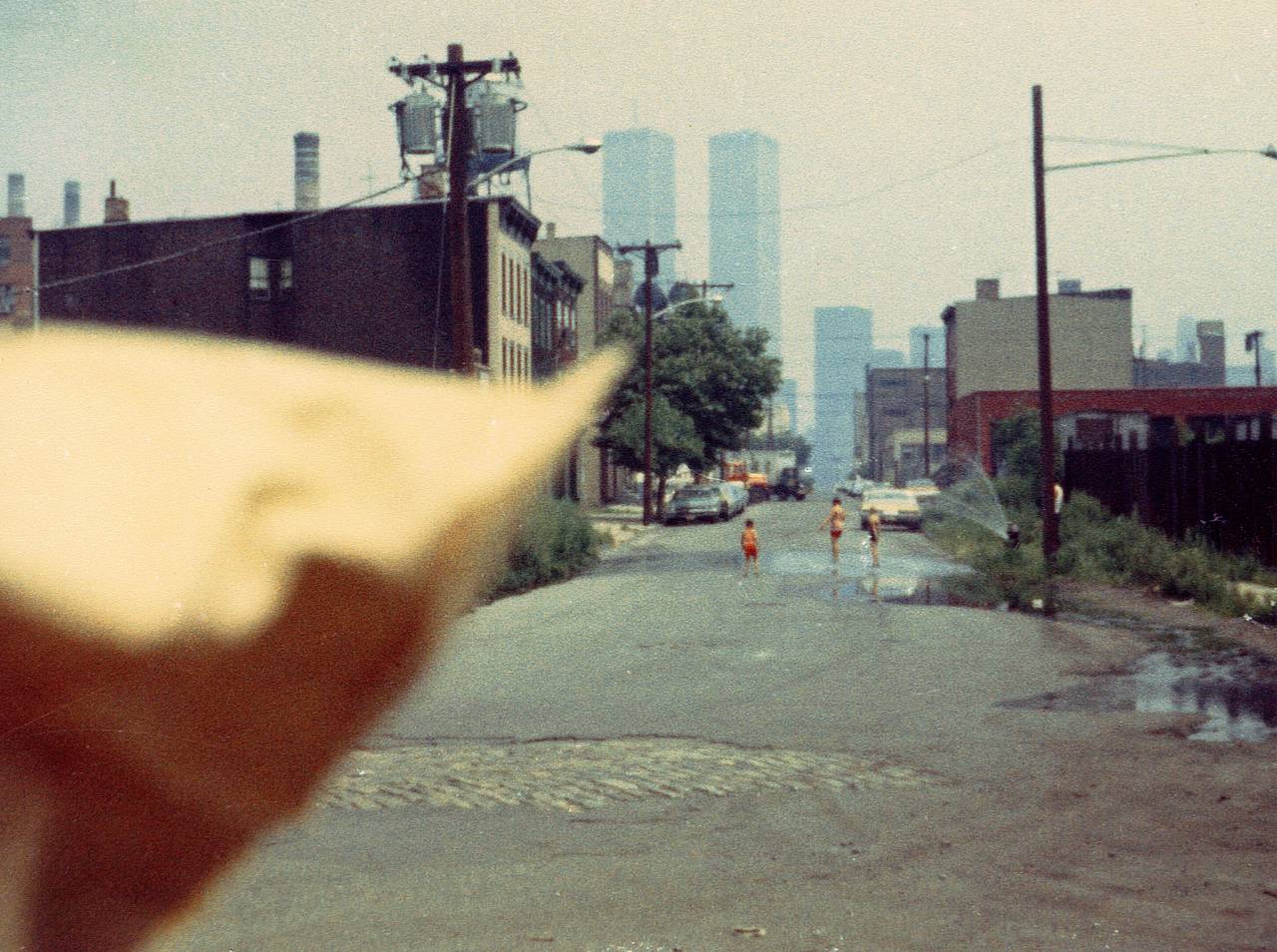 kids cooling off in a fire hydrant amidst the tenements of Dudley Street near the Morris Canal. The World Trade Center and Lower Manhattan hover as if in a different world. Jersey City. July 1975

Visitors to New York City in the summer of 1975 were greeted with a pamphlet that said “Welcome to Fear City” on the cover and subtitled “A Survival Guide for Visitors to the City of New York”. It was said that about one million of them were printed. It that warned, “Until things change, stay away from New York City if you possibly can.” People were warned not to leave midtown Manhattan, not to take any subways at all. And not to walk anywhere after six in the evening.

Kevin Baker in an article for the Guardian wrote,

New York’s fiscal crisis of the mid-1970s is surely one of the weirdest moments in the history of the city – indeed, of the United States. It was a time when the wholesale disintegration of the largest city in the most powerful nation on earth seemed entirely possible. A time when the American president, Gerald Ford – egged on by his young chief of staff, one Donald Rumsfeld – sought not to succour New York but to deliberately shame and humble it, and perhaps even replace it as the world’s leading financial centre.

Of course the warnings were over-the-top, although the crime rate in New York had more than doubled over the preceding ten years and many other crimes had increased ten-fold. Meanwhile New York City had an unprecedented fiscal crisis in 1975, and two years later the city descended into chaos after the power went out for 25 hours. The population declined to just over seven million from eight million ten years before. 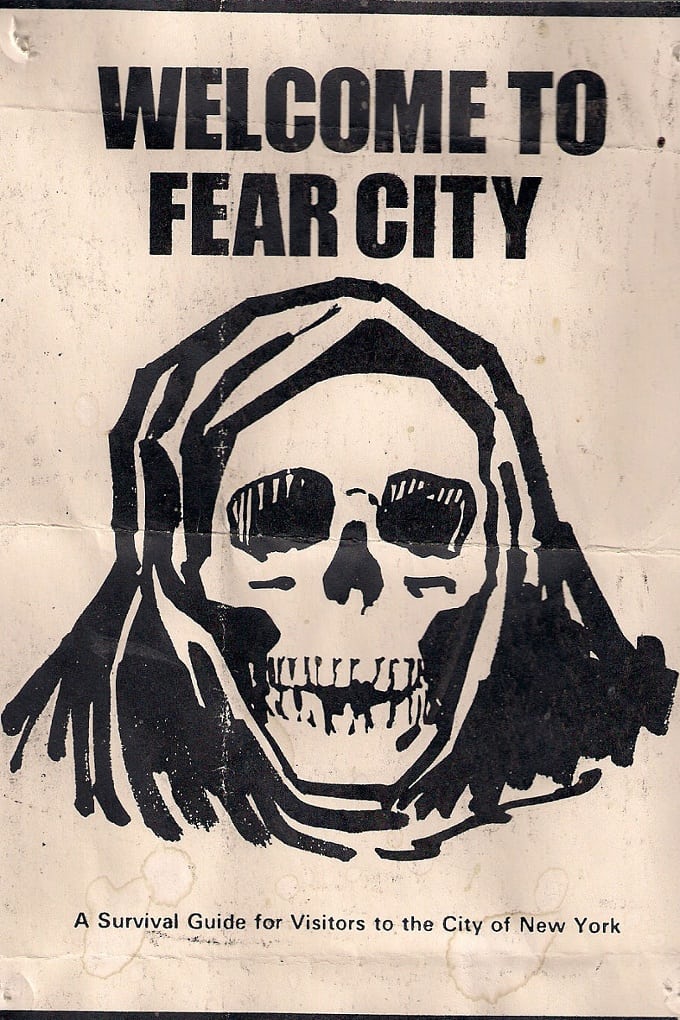 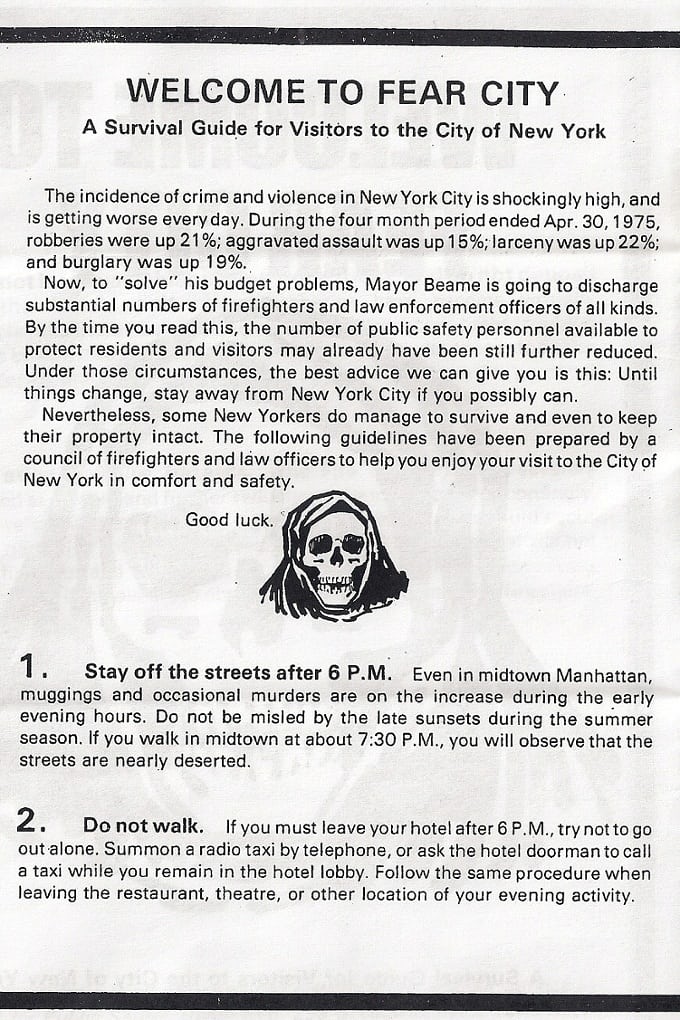 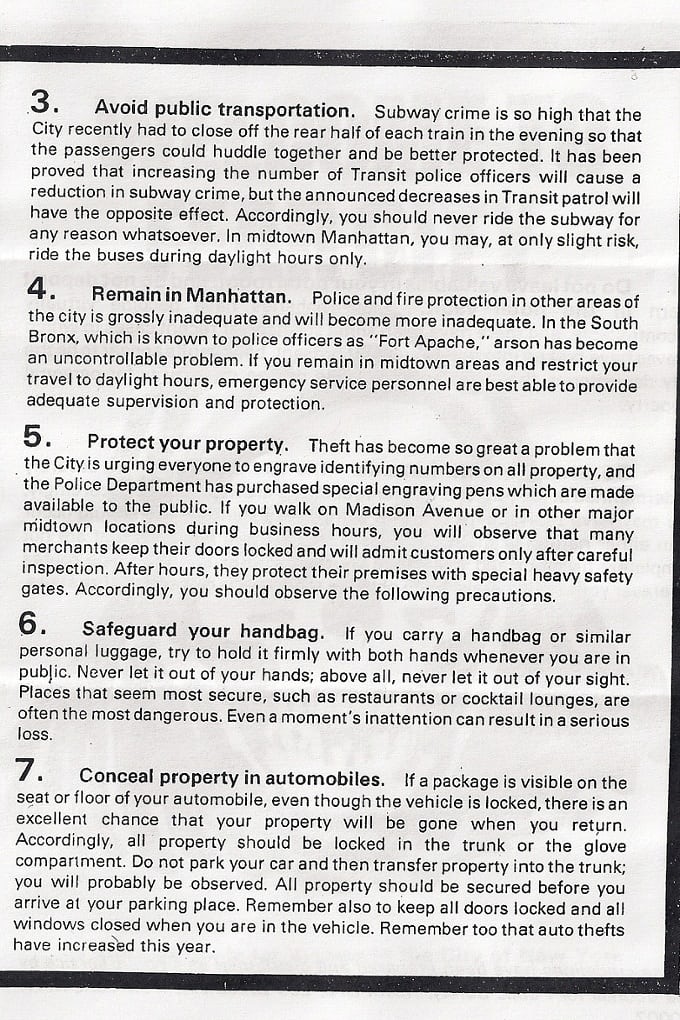 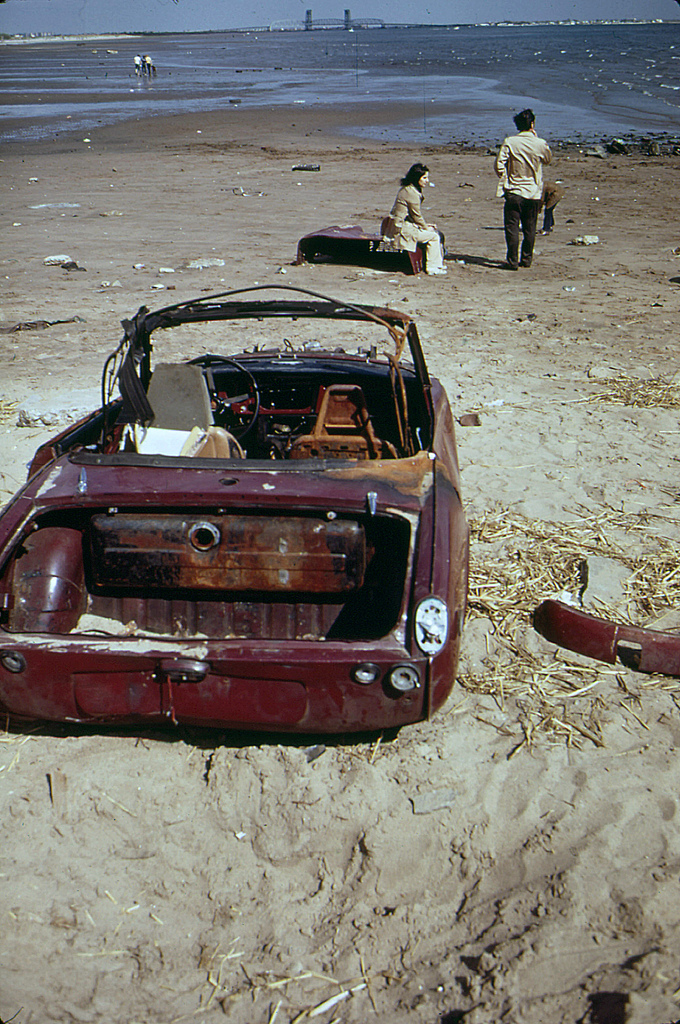 Plum Beach near Sheepshead Bay in Brooklyn. May 1973 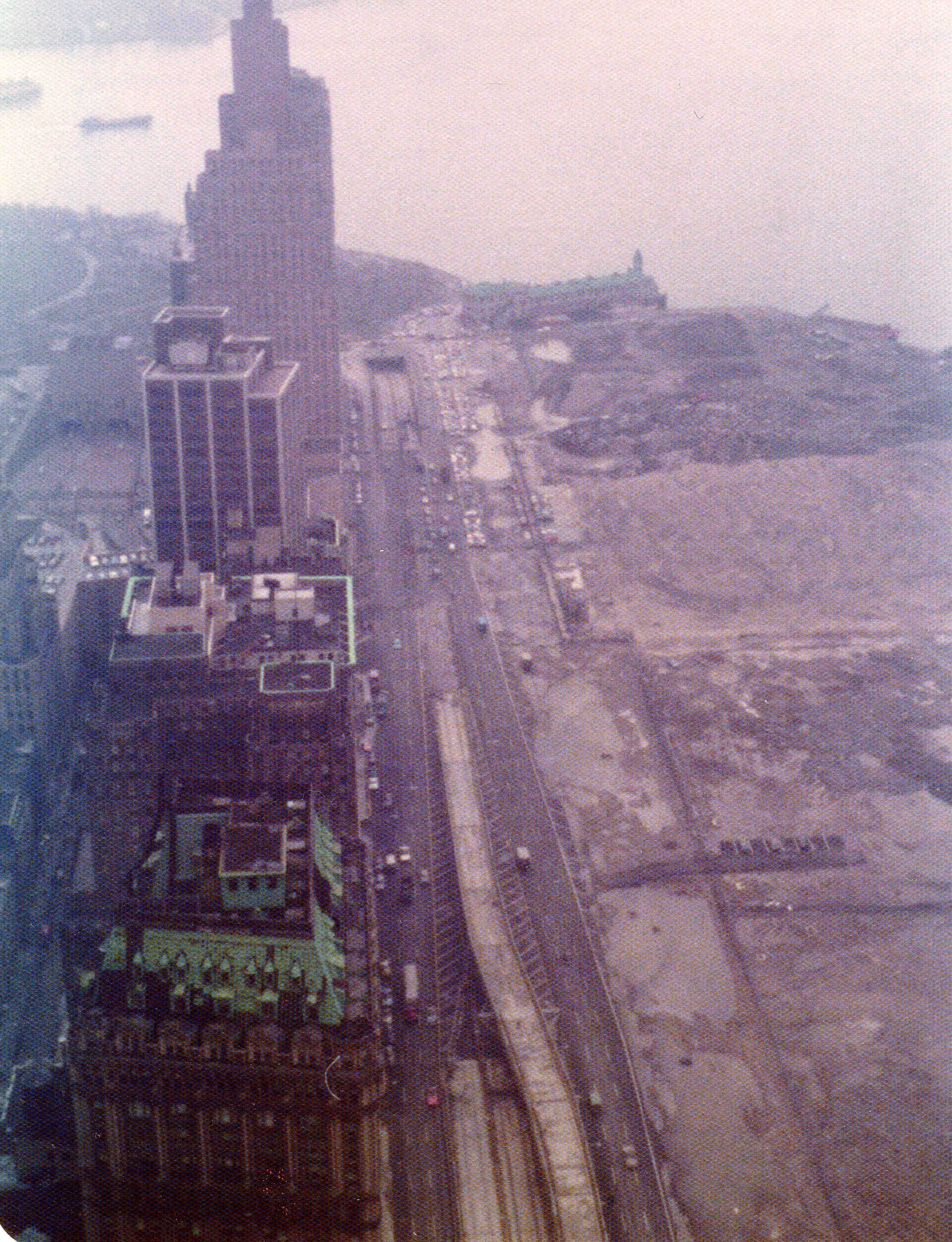 View from the 58th floor of the World Trade Center to the Battery Park City landfill, Pier A, end of the West Side Highway and New York Harbor on a foggy afternoon in March 1975. New York

Cruising down the dilapidated 1970s Henry Hudson Parkway on the west side toward midtown Manhattan in my dad’s 1965 Pontiac Bonneville Aug. 1975

Battery Park City under construction, the very end of the abandoned West Side Highway, West Street and the World Trade Center on a rainy day in March 1975. New York. 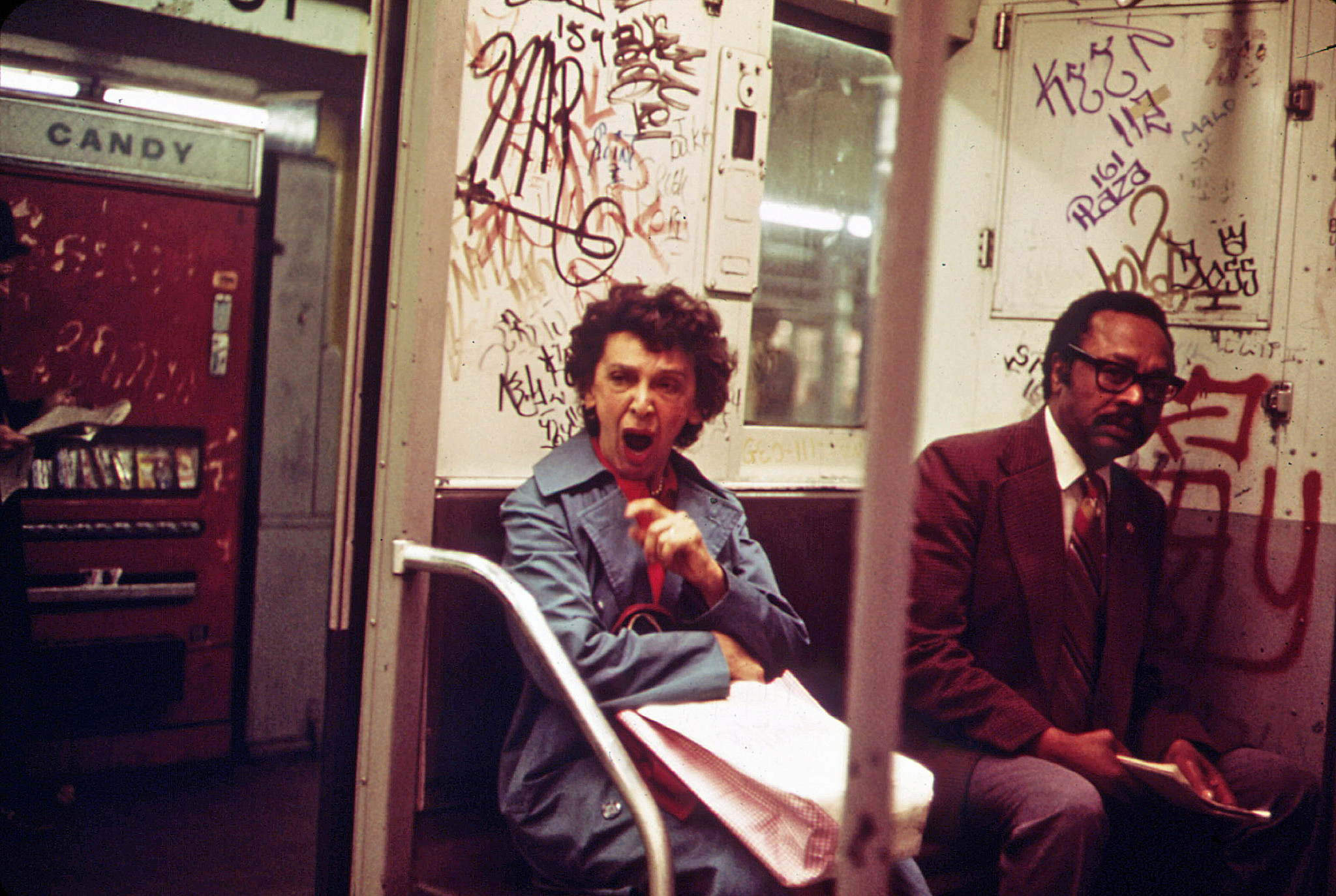 The usual graffiti adorns the interior. New York. May 1975 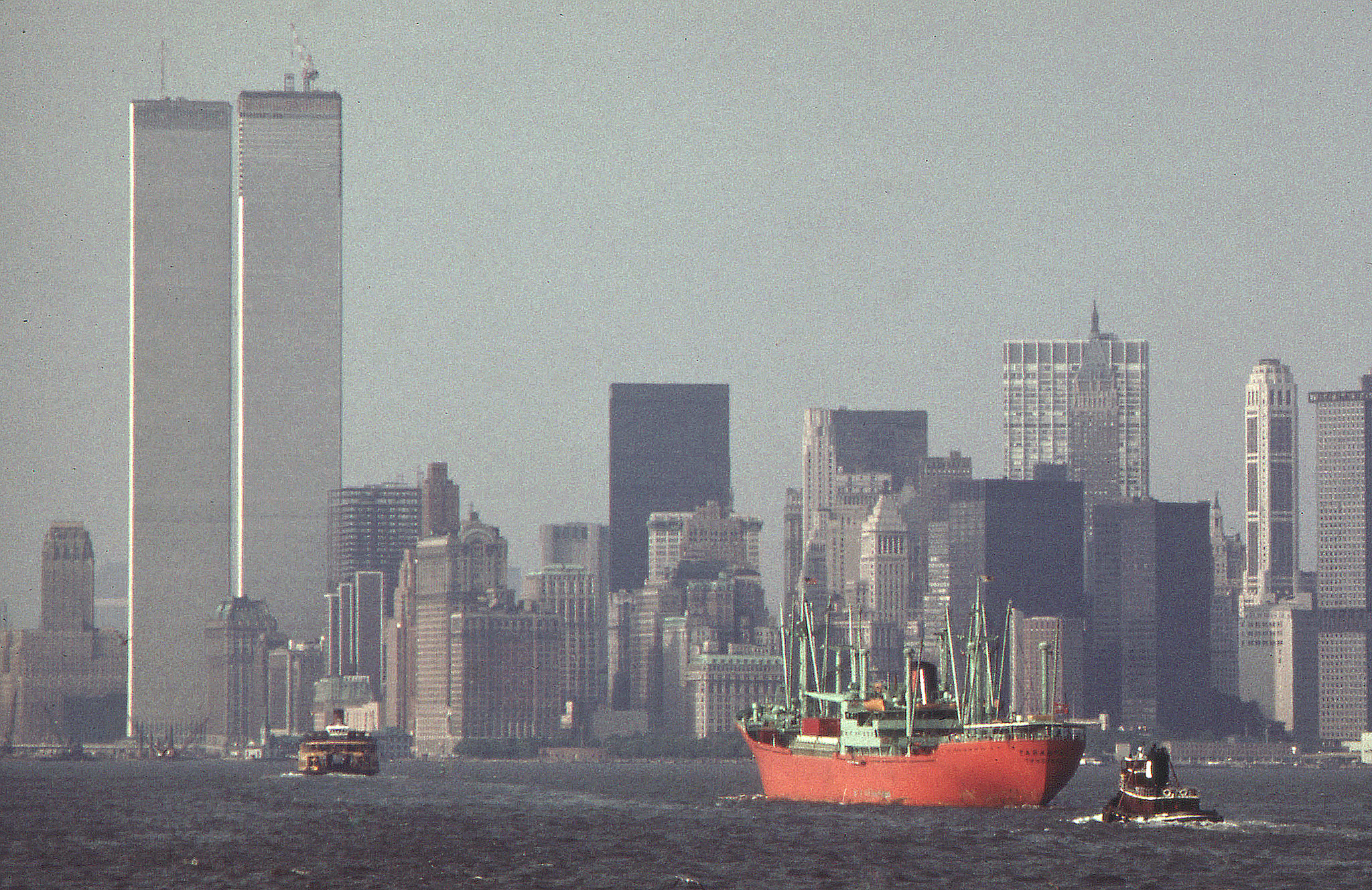 A foggy day on the harbor from the Staten Island Ferry looking toward Lower Manhattan. June 1974 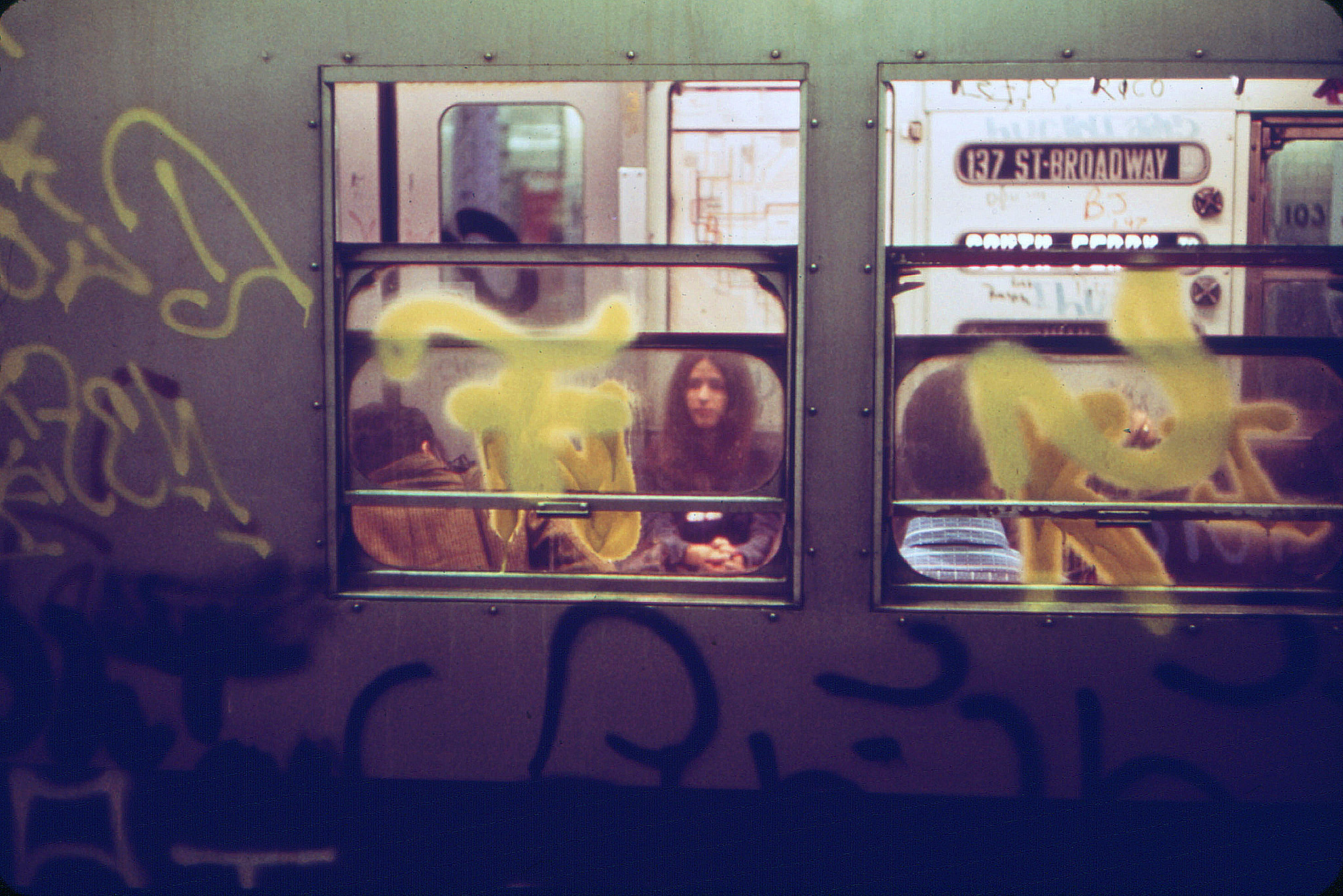 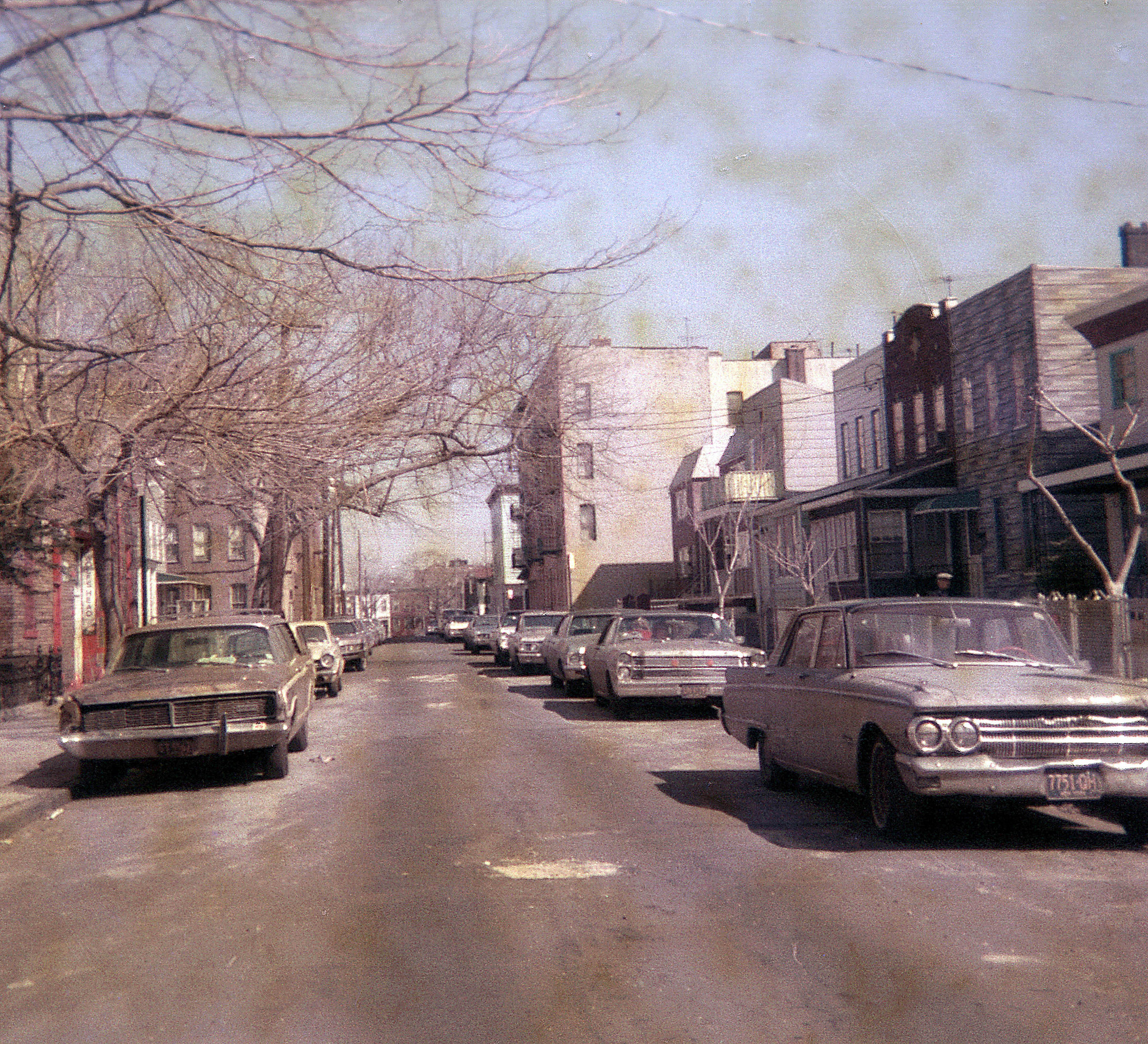 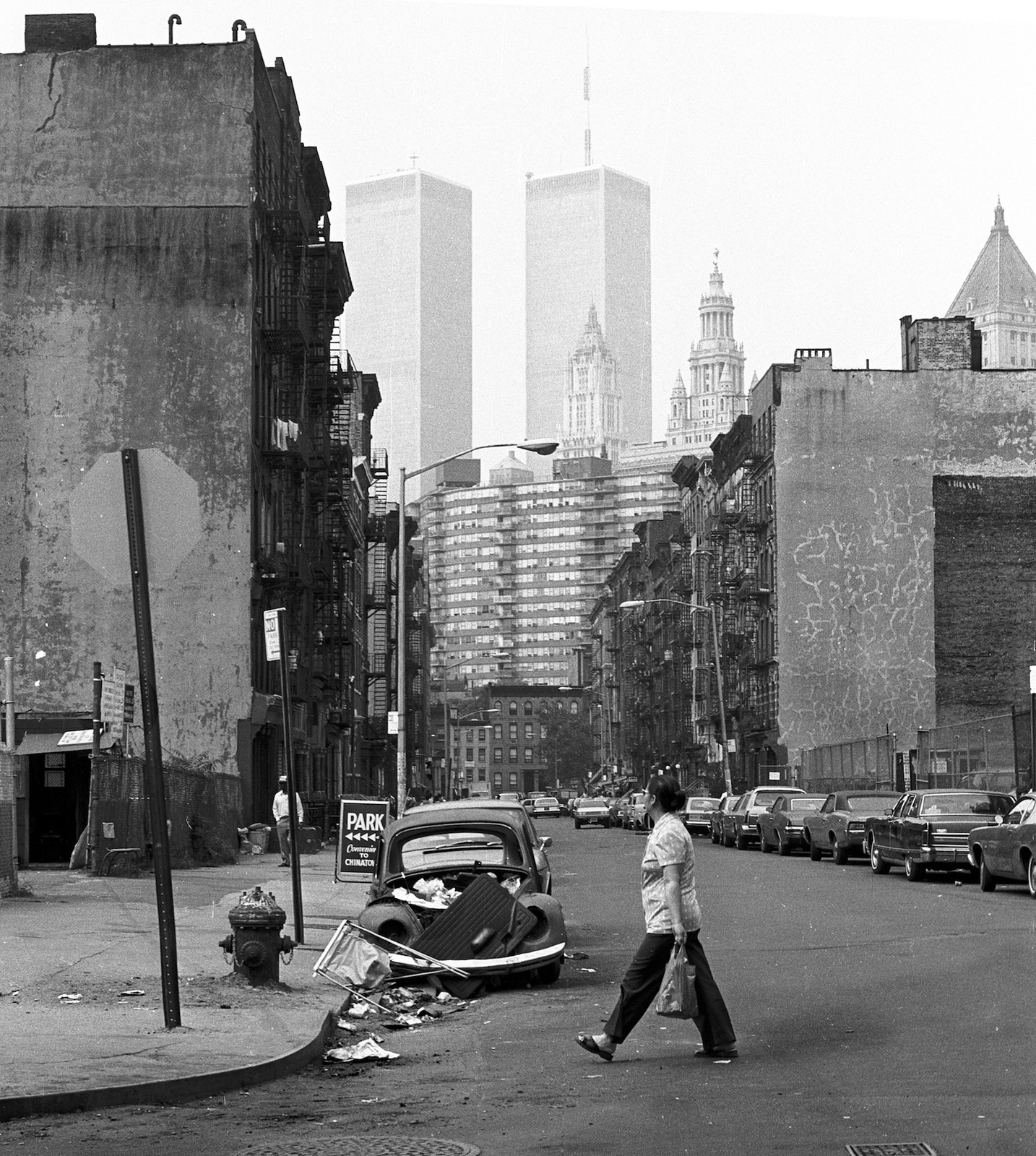 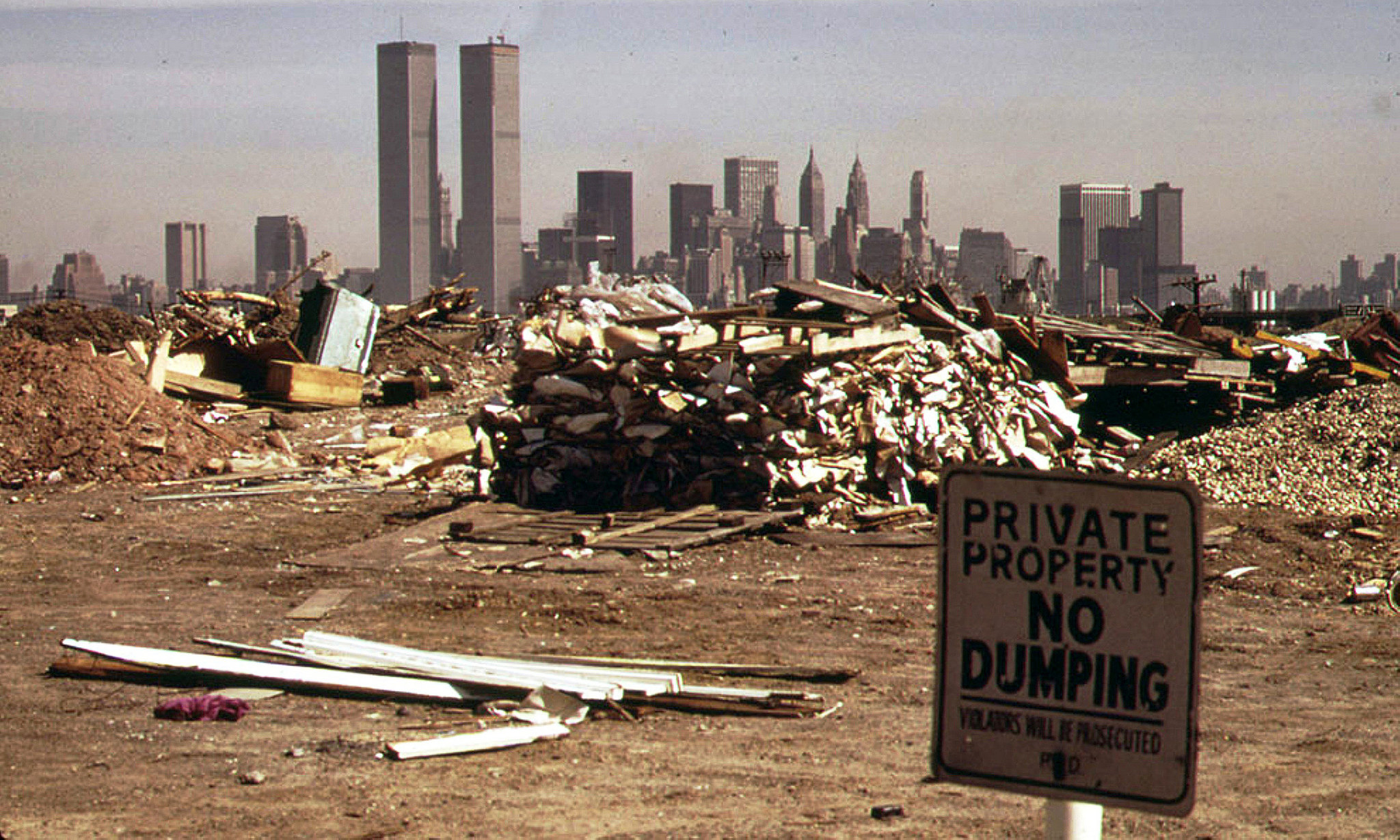 Looking east to Lower Manhattan and the World Trade Center from what is now the Grove of Remembrance, a fenced off overgown area that was too toxic to remediate. March 1974. 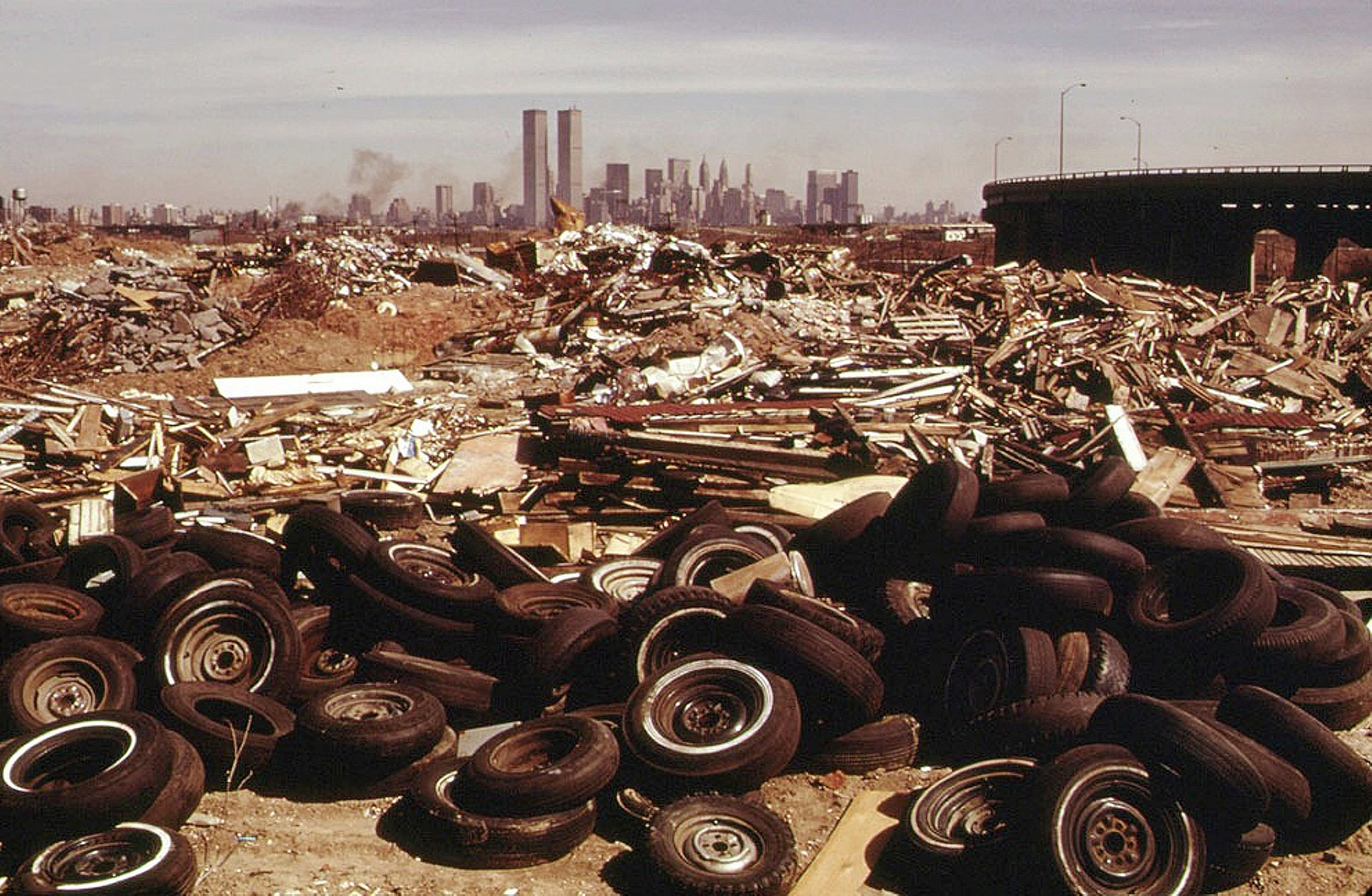 Looking east to Lower Manhattan and the World Trade Center near the New Jersey Turnpike exit 14B from James Hamil Drive. March 1974. 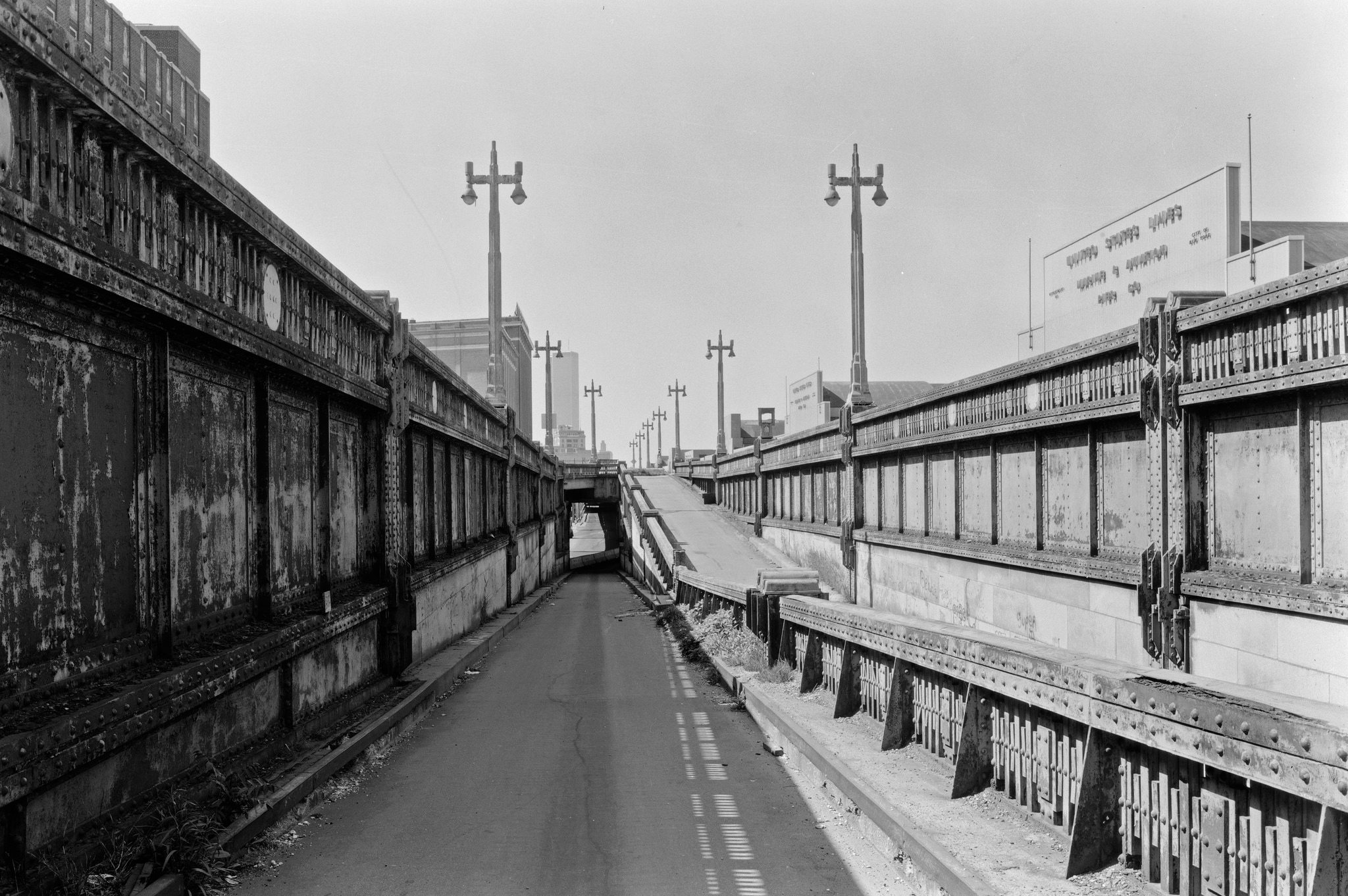 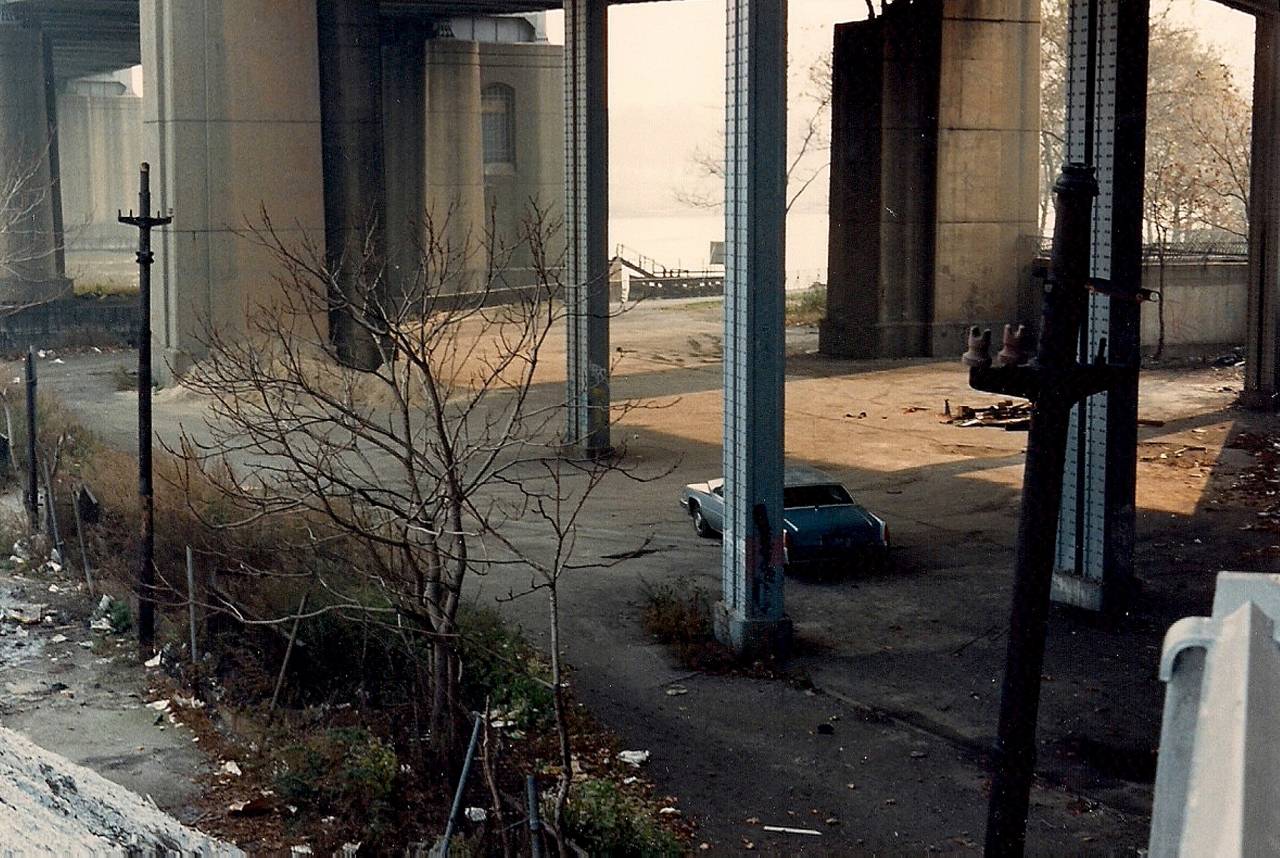 Morning light under one of the bridges crossing the Harlem River from Manhattan to the Bronx. An abandoned, stolen Cadillac awaits. Oct 1982 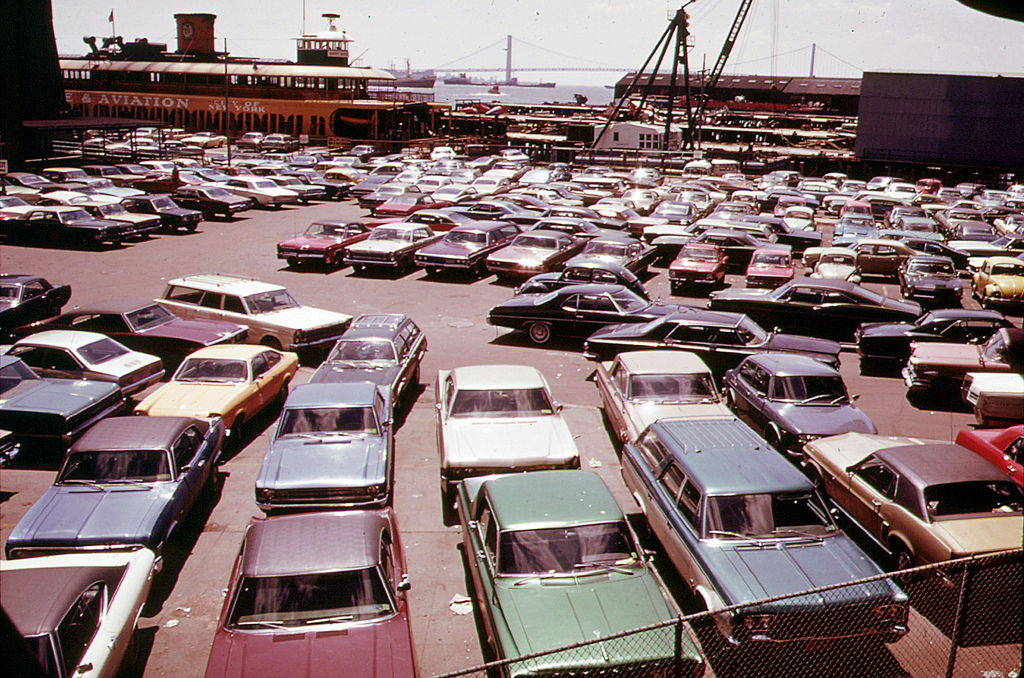 Staten Island Ferry dock on Staten Island, New York. I see a red 1965 Mustang, a purple Dodge station wagon, a Chevy Vega, a bunch of VW Beetles, a Datsun – what can U find? May 1973