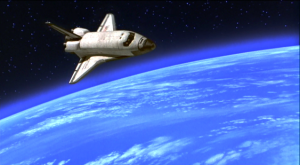 For thirty-five years now, this durable “space truck” — known officially as the “Space Transportation System” — has appeared in many space movies of the contemporary or realistic variety.

In fact, the shuttle may just be Hollywood’s most oft-seen spaceship, rivalling even Star Trek’s U.S.S. Enterprise in terms of its appearances.

In other words, every time a Hollywood movie is set “now” or in the near future — and it must feature scenes set in space — NASA’s space shuttle is the go-to vehicle to take protagonists there.

In real life, this re-usable space craft flew 135 missions and was retired, officially, by NASA in 2011.  But if Gravity is any example,  the shuttle may continue to have a thriving Hollywood after-life.  The shuttle’s career in Hollywood has seen the craft visit comet tails, land on passing asteroids, and even recover strange alien life forms.

In lieu of a stirring Academy montage, below is a select filmography of the space shuttle’s most dramatic silver screen appearances cross the last several decades.

As you’ll no doubt notice, the shuttle has acted alongside some of the biggest stars in the business…

Mission: In Moonraker (1979), James Bond (Moore) — 007 — co-pilots the space shuttle to low Earth orbit with Dr. Holly Goodhead (Chiles), where he finds a hidden space station operated by a megalomaniac, Hugo Drax (Michael Lonsdale). The shuttle not only gets James Bond to outer space, it gets him home safely.

More to the point, Moonraker imagines a fleet of space shuttles launching consecutively, something that never actually occurred in real life. The Bond film even arms NASA’s famous work-horse with a  laser gun in its nose.

Another historical foot-note: Drax’s Moonraker shuttle launched before the real life NASA version, Columbia, did in 1981.  But you wouldn’t know that from the film’s extraordinary visual effects, which realistically depict the craft attaining planetary orbit.  Created by Derek Meddings, these effects still convince, even today. 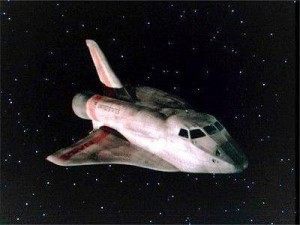 Mission: Buck Rogers’ Ranger 3 — a modified version of the STS or space shuttle — is the last of America’s “deep space probes” in the far-off year 1987.

In this Glen Larson production — which was released theatrically in the United States — an accident freezes the shuttle’s systems and its pilot, and Buck (Gerard) doesn’t thaw out for 500 years.

In the 25th century, his shuttle is intercepted, and fired upon, by militaristic aliens called Draconians. 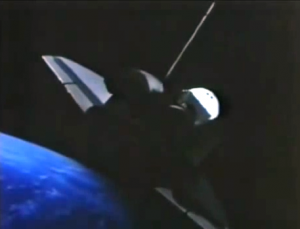 Mission: The unnamed space shuttle in Hangar 18 is on a routine mission to deploy a satellite when something catastrophic occurs. The shuttle launches the satellite…and it strikes a UFO in close proximity, causing a tremendous explosion.

Although the shuttle survives, one of the officers, Colonel Gates, is decapitated.

In the film, we see the dead astronaut’s body and severed head float — separately — by the cockpit windows as the astronaut played by Gary Collins looks on in horror.

Mission: In Tobe Hooper’s underrated and lunatic horror film Lifeforce, the British space shuttle Churchill discovers an ancient alien derelict inside the tail of Halley’s Comet. Aboard the spaceship is a gorgeous space vampire in the person of (frequently-nude…) Mathilda May.

When she makes landfall on Earth, this gorgeous being nearly seduces all of England, including American air force officer, Colonel Carlsen (Railsback). Her actions cause a vampire/zombie apocalypse in London.

In this case, no doubt, it was May herself who was Lifeforce’s most valuable player, and not the space shuttle.

Still, the film gives the shuttle a face-lift of sorts.  At one point, it deploys a vast solar-panel array or sail.  And at another point, a second, modified shuttle is seen, featuring small wings, or fins, on the cockpit section 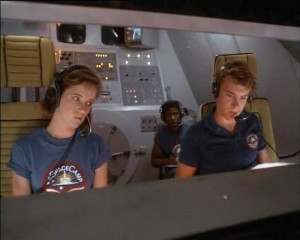 Mission: A group of teenagers living at Alabama’s space camp for the summer are unexpectedly sent into space by a kooky robot named Jinx in this 1986 film.

Unfortunately, the space shuttle Atlantis is not yet space-worthy on its maiden voyage, and low on oxygen to boot. Accordingly, the teenagers — along with their teacher, played by Kate Capshaw — must secure oxygen storage tanks from the nearby space station Daedalus to survive.

When Capshaw’s character is injured upon return from a space walk, the kids must broach the hazards of re-entry, and manually land the shuttle in White Sands. 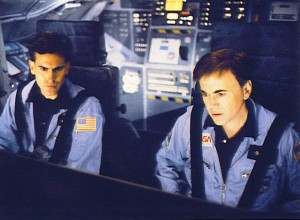 Mission:  The space shuttle Camelot makes radar contact in space with an alien derelict, and its crew discovers a 14,000 year old human corpse, and an alien seed.  Upon return to Earth, the seed sprouts into a murderous cyborg automaton.

Believing that more of this dangerous extra-terrestrial technology still exists on the moon, Commander Jason Grant (Koenig) and astronaut Tanner (Campbell), launch a mission to recover it.

In this case, like Lifeforce perhaps,  the human cast likely outshone the sturdy shuttle.  I don’t know about you, but there’s nobody I’d rather have fighting alien cyborgs than Star Trek’s Mr. Chekov, and Ash from the Evil Dead movies. 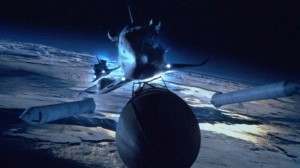 Mission: In this much-panned Michael Bay blockbuster, an asteroid approaches Earth on a collision course, first spraying meteors across the planet.

The shuttle Atlantis is destroyed by one such meteor storm.

Later in the film, the blue-collar heroes  board twin military shuttles of the modified variety, Freedom and Independence, to drill the colossal asteroid and blow it to smithereens with a nuclear charge.

Like Moonraker before it, Armageddon features multiple shuttle launches occurring near-simultaneously. The modified shuttles are also painted gray instead of white, and side-mounted boosters.

Mission: A group of retired and quarrelsome NASA astronauts are called back into action when an obsolete Soviet communications satellite malfunctions, and its orbit begins to decay.

The over-the-hill “space cowboys” of the title must wrangle the Cold War relic from their space shuttle, and also deal with the onset of their golden years.

Mission: A dangerous irregularity in the Earth’s magnetic field causes the space shuttle Endeavor to fall from orbit, and brace for a wild crash-landing.  The ship lands in the Los Angeles River…in (mostly) one piece.

Mission: In this Superman re-boot (which has since been re-booted…), the space shuttle malfunctions when attempting to lift off from the dorsal side of a 777 in flight.

The shuttle makes it to space thanks to a timely assist from the Man of Steel (Brandon Routh), but the plane breaks apart.  Once more, it’s Superman to the rescue…

Mission: STS -157, Explorer, is sent to space to install a new prototype scanner on the Hubble Telescope. In charge of the mission is veteran Matt Kowalski (Clooney), who oversees the operation, while Dr. Ryan Stone (Bullock) installs the device.

The wounded shuttle is left for dead in space, while Kowalski and Stone make for the distant ISS.

Given such longevity in our popular imagination,  perhaps one of these days Oscar will remember the durable and versatile craft with a “Lifetime Achievement” Award.

In the meantime, there’s always TV to consider, and the space shuttle has also guest starred in such programming as Odyssey 5 and The X-Files... 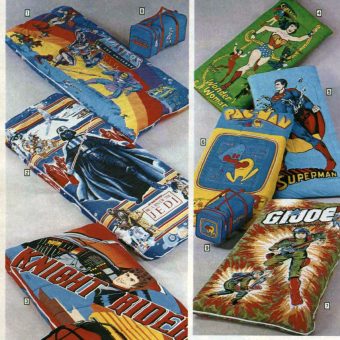