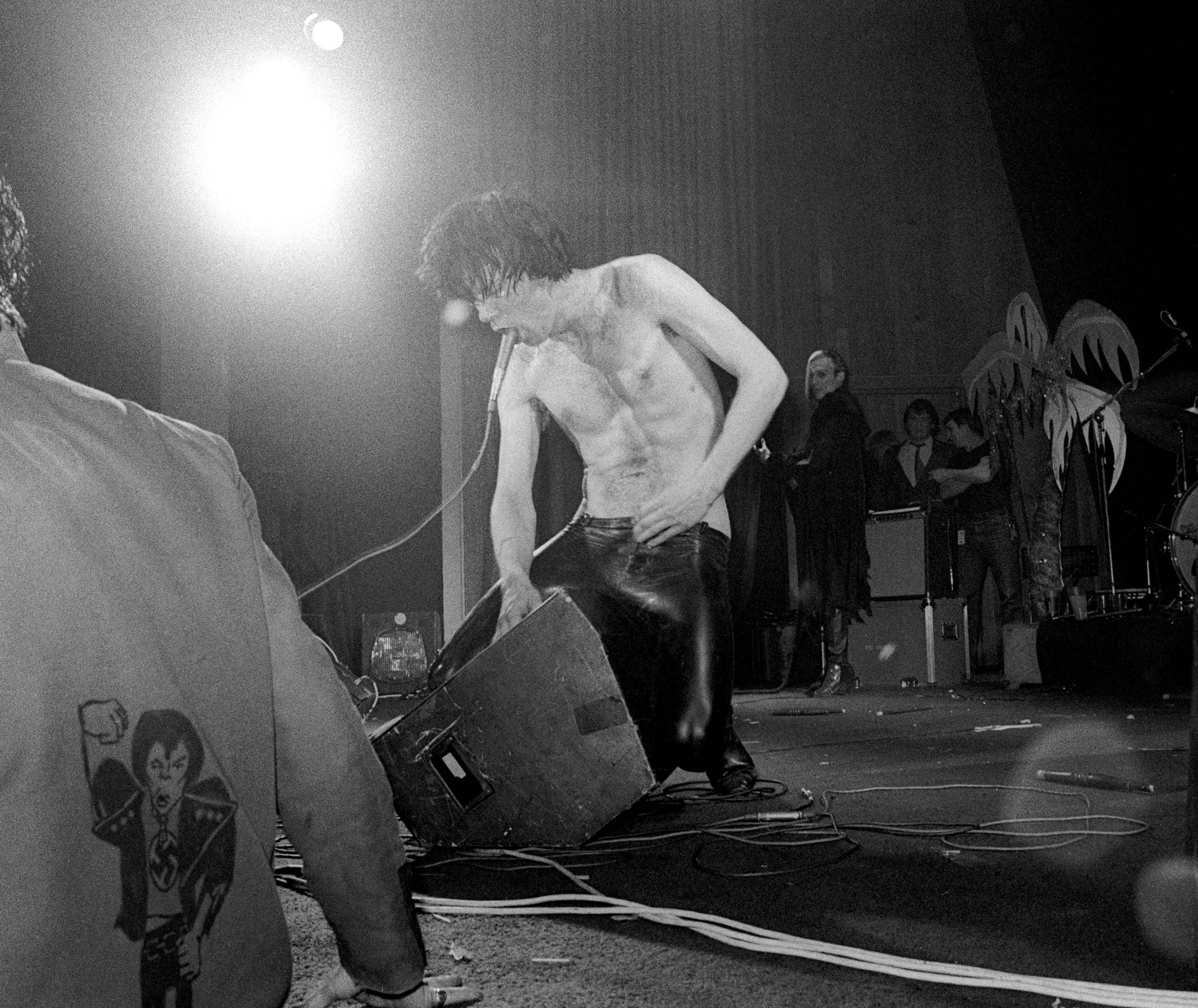 On June 13, 1978, The Cramps performed a free concert for patients at the California State Mental Hospital in Napa, California, a place “surrounded by vineyards and dairy farms”. The Cramps, on tour from New York, were accompanied by The Mutants from San Francisco.

“We’re The Cramps, and we’re from New York City, and we drove 3,000 miles to play for you people,” went lead singer Lux Interior’s introduction to a show that vies with the The Sex Pistols Christmas Party as the strangest and greatest punk rock concert in history.

“And somebody told me you people are crazy, but I’m not so sure about that,” said Lux to the pogoing patients. “You seem to be all right to me.”

Howie Klein was in the audience. A rock and roll journalist in San Francisco, Klein wrote about the show in the July 1978 issue of punk fanzine New York Rocker. His story began:

‘LET’S DRIVE UP to the funny farm. The Cramps and Mutants are doin’ a concert for the nuts; should be lotsa yuks.” I wanna take the rap for going up to the show at Napa State with the attitude of wantin’ to see the pinheads and cretins. I had even tried to talk the Mutants into doing ‘Cretin Hop’. As long as the loonies didn’t touch me or drool on me it was all gonna be a load of laughs.

‘What I got instead was the fuckin’ greatest New Wave show I’ve ever seen – and this boy’ been to England and seen The Clash.’

The bands interacted with the audience:

The Mutants: “Anyone got any pot?”

Audience: “We got thorazine.”

‘After the first song the whole place as going NUTS… Everybody got to do whatever they wanted and half the audience wound up on the stage… there seemed to be patients of the Hebrew persuasion doing the Sabra dance, and over-the-edge hippies ding the hippy dance, as well as folks doin’ the Swim, the Bunny-hop, the Twist…a couple of waltzers, the Robot, the Funky Chicken and lots of people ding their own little dance… But the greatest hing was seeing all these overweight, middle-age women holding handbags and dong totally liberated pogoes. What an audience… Ive never seen such audience participation.’ 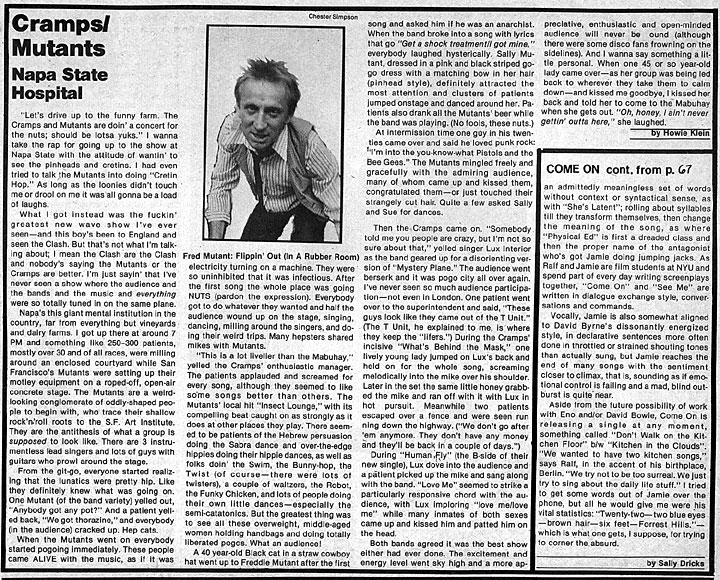 ‘With other rock shows at the time, there was always a barrier between the audience and the band,” Klein said. “In punk, the barrier wasn’t as steep. That was kind of the rule, anyway, in 1978. It was part of the punk ethos; the band and the audience are on the same level. But it was even more so at this concert. The audience and band were together and everyone was participating. It was just the way it should be.’

The Cramps had been invited to perform by Bart Swain, one of the NSH staff, who wanted to stimulate the patients. He “often brought in musicians to expand the patients’ horizons”, says Ted Mills. (Bart’s mother, the late Elaine Swain, was a teacher, poet, writer and community activist.) Poet Maureen Hurley recalls how Bart used the arts to communicate with the patients. In her dairy she recalls:

Bart Swain, one of the NSH staff, drops in, he taught my class last week when I couldn’t be here because of my knee operation, and he was amazed at what the kids came up with. We discuss lyric poetry, music, content and form. I read him Carl Sandberg’s Rain poem and he gives me a line of his own for each Sandberg line.

Guy is something else. He said the rats ate his journal—he elaborates, literary rats. We talked about Whitman’s Leaves of Grass and alliteration. Word is getting around via the grapevine about this workshop. Guy asked me if I was in occupational therapist. No, I said. I’m a real live poet. Published and all that? he asks. I answer, yes and all that.

It took time and a lot of conversation and many tentative start to get Peter to open up and write. I received an unexpected compliment. He said he liked me because I was real. I said, I hope so, otherwise I’m a figment of my own imagination. What would my mother say? He laughed and said he likes the way I talked with my hands, I grasped the air with substance.

Can poetry heal? James Dicky enlarged on the power of poetry to connect with your mind, guts, hearts and muscles:

Part of the spell of poetry is the rhythm of language, used by poets who understand how powerful a factor rhythm can be, how compelling and unforgettable. Almost anything put into rhyme is more memorable than the same thing in prose. Why this is, no one knows completely, though the answer is surely rooted far down in the biology by means of which we exist; in the circulation of the blood that goes forth from the heart and comes back, and in the repetition of breathing.

And so too of lyrics, music and The Cramps, who opened the show with Mystery Plane:

Oh, Oh yes he will
Yeah!

My daddy he’ll come back again
And take me from this mystery plane
And maybe if I go real slow
He’ll let me drive his UFO, Oh, Oh, Oh
Oh Boy

As James Baldwin noted: “The poets (by which I mean all artists) are finally the only people who know the truth about us.”

And now for the show: