Charlie Bucket got up to more than we read in the final for-print edit of Roald Dahl’s Charlie and the Chocolate Factory. One chapter – Chapter 5 (entitled “The Warming-Candy Room”) – never made it into print because it was “too wild, subversive and insufficiently moral for the tender minds of British children.”  The chapter, written in 1961, was cut from the version first published in the US in 1964 and in the UK in 1967. 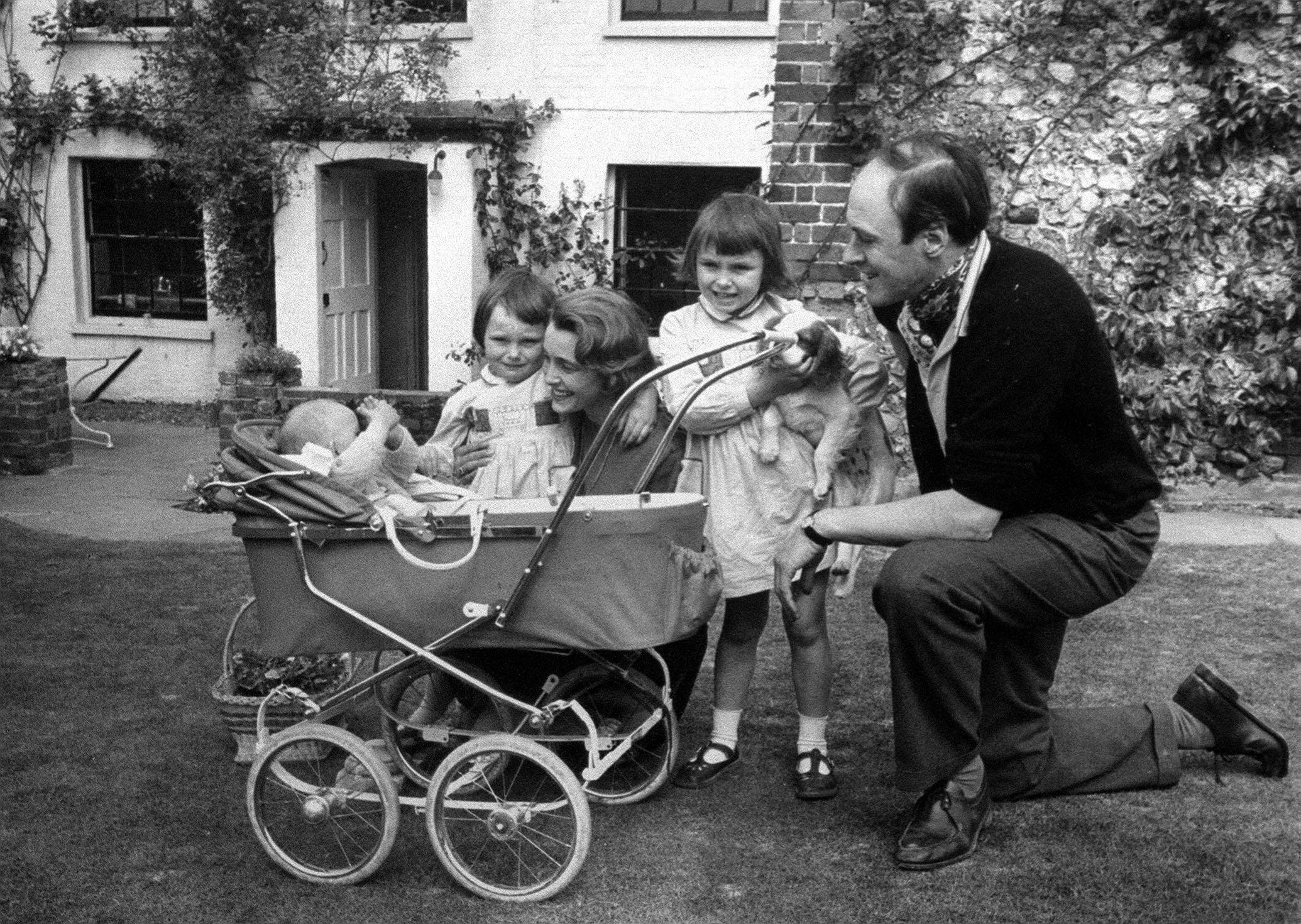 A family photograph of the children’s author Roald Dahl, with his wife Patricia Neal, and children Olivia (right) Tessa, and Theo (in pram).  01/01/1961 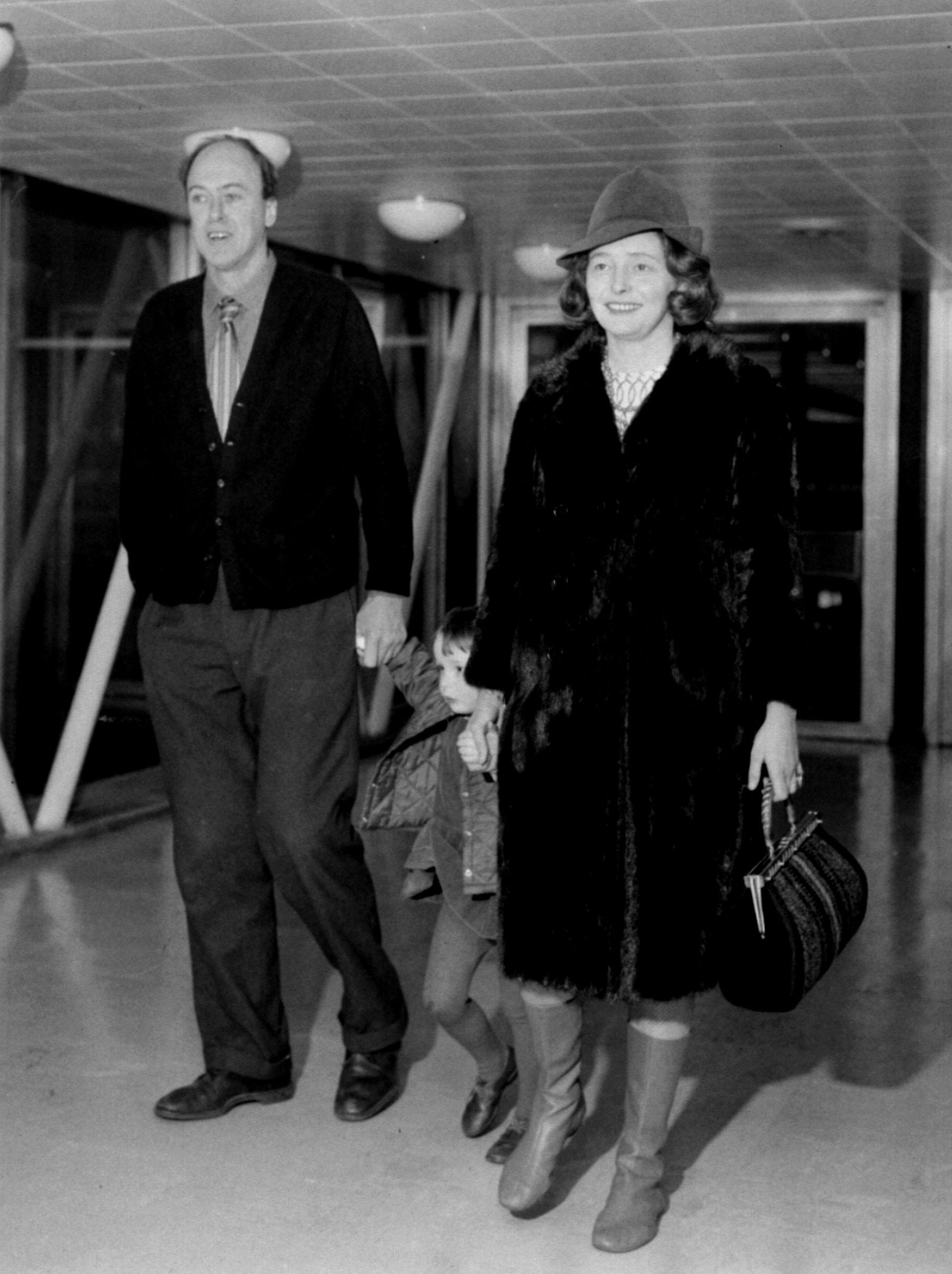 The remaining eight children, together with their mothers and fathers, were ushered out into the long white corridor once again.

“I wonder how Augustus Pottle and Miranda Grope are feeling now?” Charlie Bucket asked his mother.

“Not too cocky, I shouldn’t think” Mrs Bucket answered. “Here – hold on to my hand, will you, darling. That’s right. Hold on tight and try not to let go. And don’t you go doing anything silly in here, either, you understand, or you might get sucked up into one of those dreadful pipes yourself, or something even worse maybe. Who knows?”

Little Charlie took a tighter hold of Mrs Bucket’s hand as they walked down the long corridor. Soon they came to a door on which it said:

“Hey, this is where Augustus Pottle went to, isn’t it?” Charlie Bucket said.

“No”, Mr Wonka told him. “Augustus Pottle is in Chocolate Fudge. This is Vanilla. Come inside, everybody, and take a peek.”

“In the centre of the room there was an actual mountain, a colossal jagged mountain as high as a five-storey building, and the whole thing was made of pale-brown, creamy, vanilla fudge. All the way up the sides of the mountain, hundreds of men were working away with picks and drills, hacking great hunks of fudge out of the mountainside … As the huge hunks of fudge were pried loose, they went tumbling and bouncing d own the mountain and when they reached the bottom they were picked up by cranes with grab-buckets, and the cranes dumped the fudge into open wagons.” 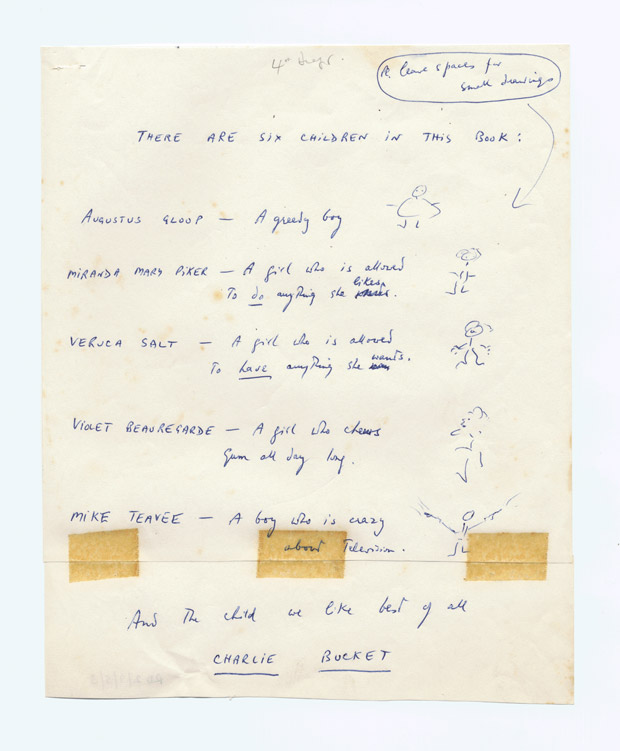 In alter version, Roald Dahl listed six children who were going into the chocolate factory, with stick-figure illustrations. This is the penultimate list of kids just before Miranda was removed. Via

Wonka warns the parents and children to avoid the gap in the wall.

“That hole,” said Mr Wonka, “leads directly to what we call the Pounding and Cutting Room. In there the rough fudge gets tipped out of the wagons into the mouth of a huge machine. The machine then pounds it against the floor until it is all nice and smooth and thin. After that, a whole lot of knives come down and go chop chop chop, cutting it up into neat little squares, ready for the shops.” 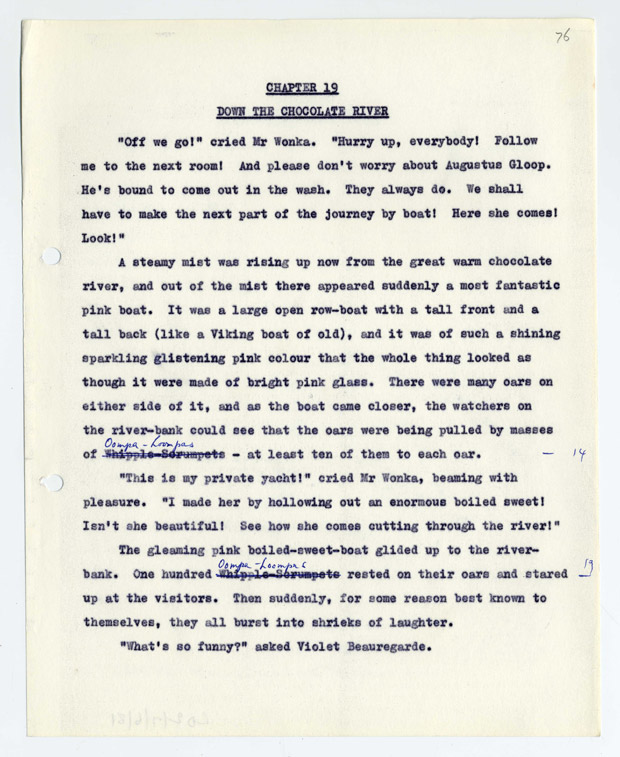 Roald Dahl changed the Whipple-Scrumpets to Oompa-Loompas. This is the last draft before publication. Via

The Oompa Loompas hymn their offing:

“Eight little children, such charming little chicks. But two of them said ‘Nuts to you’, and then there were six.”

Via: The Guardian, Smithsonian 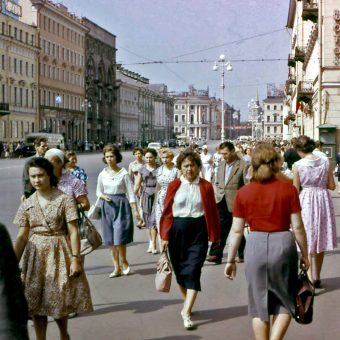 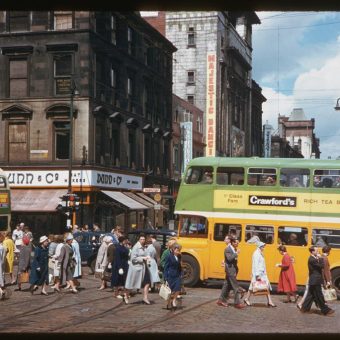