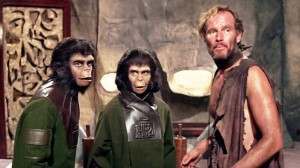 IN my earlier post this week, I gazed at the five simians that — across the Planet of the Apes multi-verse — had significantly impacted the media franchise’s “future history.”

Today, I want to remember the five human beings in the Planet of the Apes saga who did much the same thing.

As is the case with the apes, not all the actions of these characters prove positive in either the short term, or the survival of the species.

This gentle circus owner played by Ricardo Montalban is a follower of St. Francis of Assisi, who loved “all animals.”   In the early 1970s, Armando shelters Zira and Cornelius for as long as he can.  Then, when he can no longer protect them, he cares for their infant, Caesar in secret.

Armando raises and educates Caesar, an act which boasts planetary repercussions. Finally, when captured by the ape-hating Breck Administration in the 1990s, Armando sacrifices himself rather than finger Caesar as the child of the talking apes from the future, a label which would require his immediate murder.

Basically, Armando teachers and shelters Caesar — acting as a father, for most of the ape’s life — and Armando’s child is the one who, on the night of the fires, initiates the planet of the apes and the downfall of man.

Okay, so this is another two-fer (like Zira and Cornelius, in my previous Apes list).  Basically, there are two African-American brothers in the late 20th century, the MacDonalds (played by Hari Rhodes in Conquest of the Planet of the Apes and Austin Stoker in Battle for the Planet of the Apes) and they serve as Caesar’s advisers during two critical points in his life.

The first MacDonald (Rhodes) surreptitiously de-activates Breck’s torture device when the governor orders Caesar electrocuted.  Had MacDonald not intervened at this juncture, Caesar would have died on the table, and the ape revolution would not have occurred, or at least not for several generations.

The second MacDonald (Stoker) serves Caesar later in his life, helping Caesar to see that not all humans are bad, and that they deserve to be represented in the Ape City government.

In broad strokes, both of these MacDonalds prove to Caesar on a personal (rather than global…) basis that humans are not monsters.  Armando was not an exception.  There are others whom he can trust, and even love.  And they deserve the same rights and privileges that apes do. 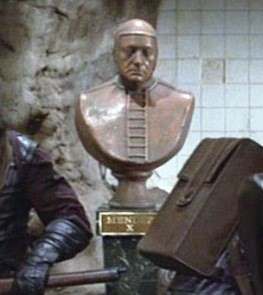 In Battle for the Planet of the Apes, this survivor of nuclear war (and the Breck/Kolp Administrations…) patiently counsels his war-like mutant cohorts that the apes should be left alone, and that no war should be waged with them.

Mendez (Paul Stevens) again counsels peace with Alma (France Nuyen), when she wishes to launch the Alpha-Omega Bomb and destroy Ape City.  Instead, he tells her, they should venerate the bomb…for it made them what they are.  She listens, and because of Mendez’s advice the planet Earth survives roughly another 2,000 years.

In Beneath the Planet of the Apes, set in the mid-3900s, we see the long line of the Mendez family (represented by sculptures), descended from the peaceful man in Battle.  Pictured above is one of the original Mendez’s descendants, Mendez X. 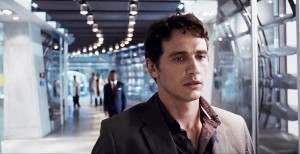 More than Caesar and the apes in the timeline of Rise of the Planet of the Apes (2011), Will is therefore responsible for decimating humanity, and leaving the door open for a change in the social order.  His act of playing God (or Dr. Frankenstein) had good intentions, of course.  He wanted to help his ailing father (John Lithgow) recover some of his mind and dignity.  But in practice, Will gave his own race a death sentence, and provided the opportunity for Caesar’s apes to ascend to planetary dominance.

Colonel Taylor (Charlton Heston) is the astronaut that survives the longest on the Planet of the Apes of the 3900s.  But his significance goes far beyond his physical endurance.  He is the man who detonates the Alpha-Omega Bomb of the Forbidden Zone mutants in 3955 (or 3978), thus destroying planet Earth, and living up to Zaius’s (Maurice Evans) belief that humans are bringers of destruction and nothing more.

Significantly, Taylor also provides the means by which the apes begin their empire in the 20th century.  His sunken spaceship is recovered from a dead lake by Dr. Milo (Sal Mineo), and used for a return trip to the 1970s. There, Zira (Kim Hunter) gives birth to future revolutionary, Caesar (Roddy McDowall), the very soul that begins the revolution of the apes.

Taylor is also a kind of cynical philosopher who begins his space quest with the belief that “there must be something out there better than man.”

When he finds the world of 3955, he learns that there isn’t…and destroys our world and the possibility of all future generations.  When Caesar chooses peace between man and ape in Battle for the Planet of the Apes, he changes the established time-line (again) so that, perhaps, when Taylor arrives in the “new” 3955, he will find a world of apes and man living in peace.

Taylor thus may be the most important human or ape in recorded history.  When he lands — depending on what he finds — life on Earth either continues, or is destroyed utterly.