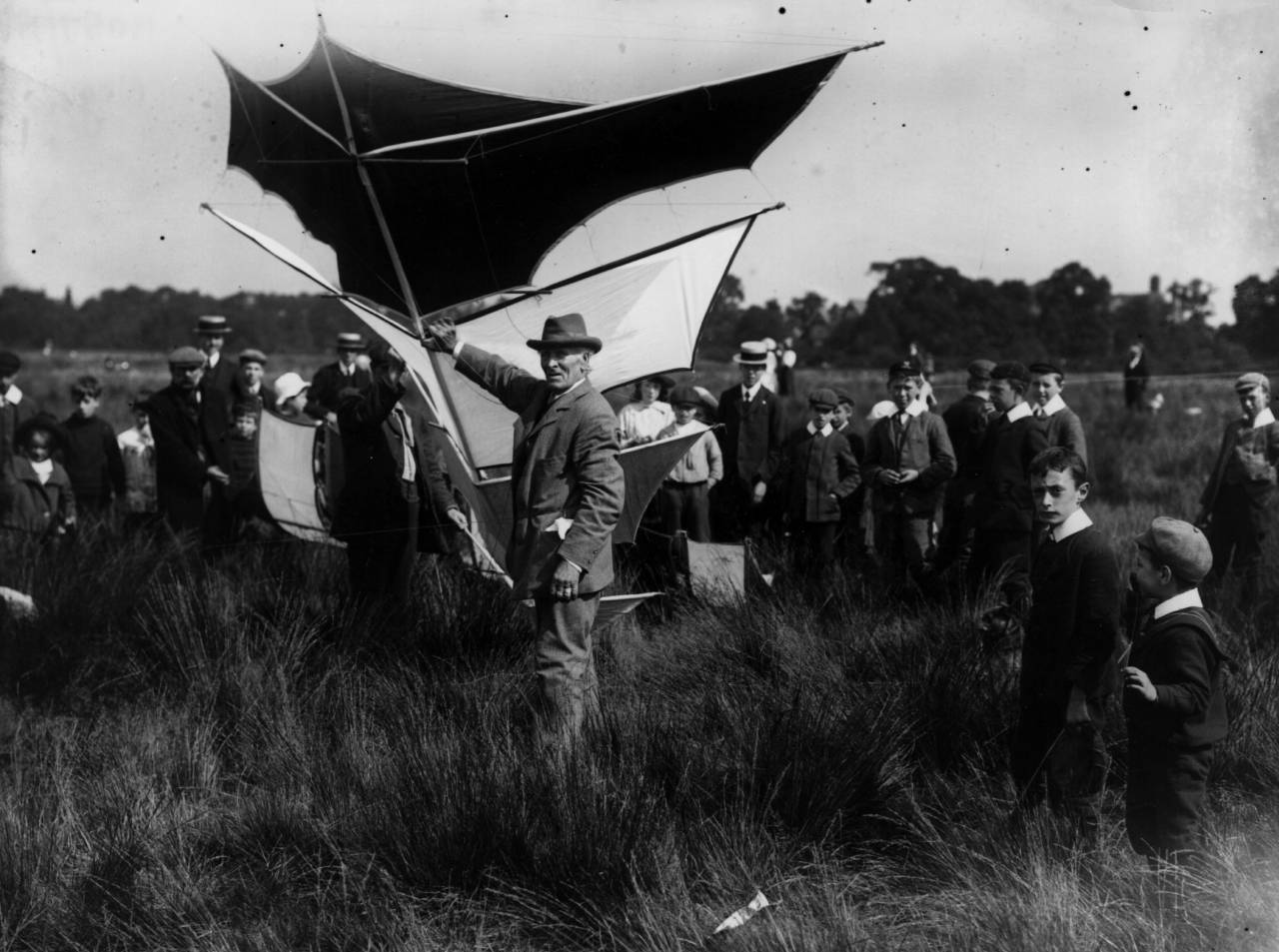 1908: A Brogdani dihedral kite being held ready for launch while a group of youths look on. 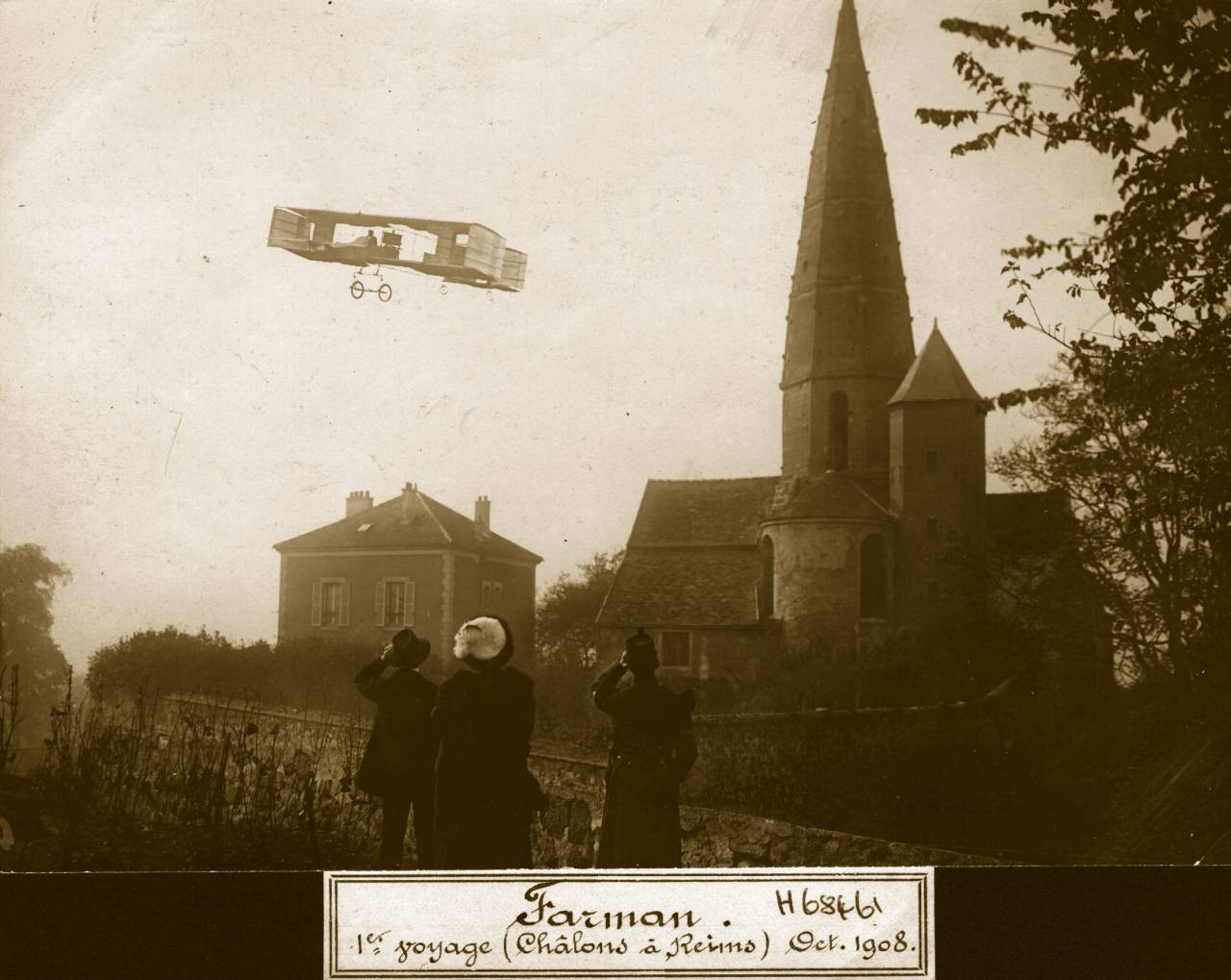 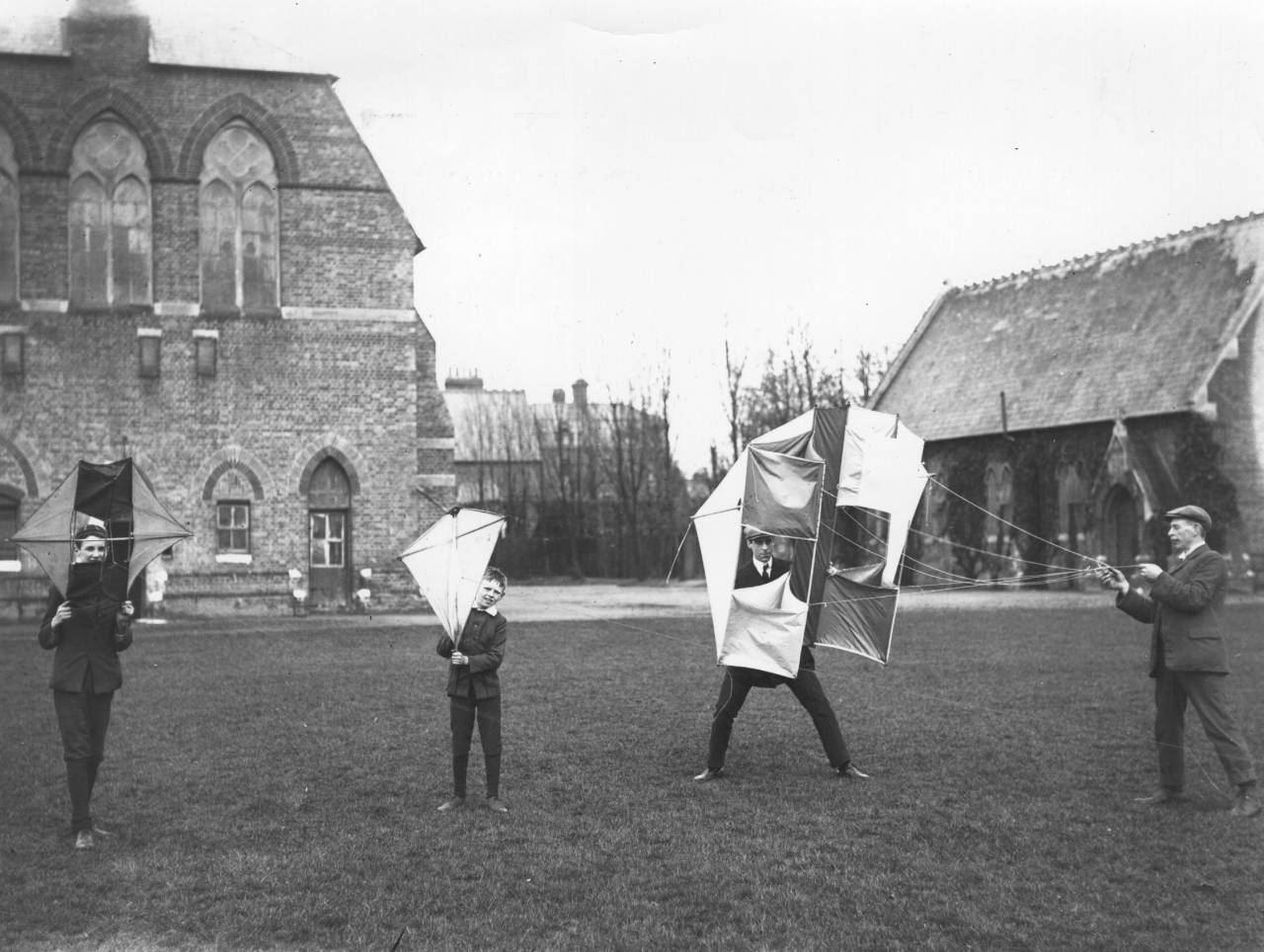 1909: An instruction lesson in kite flying at the United Service College in Windsor. 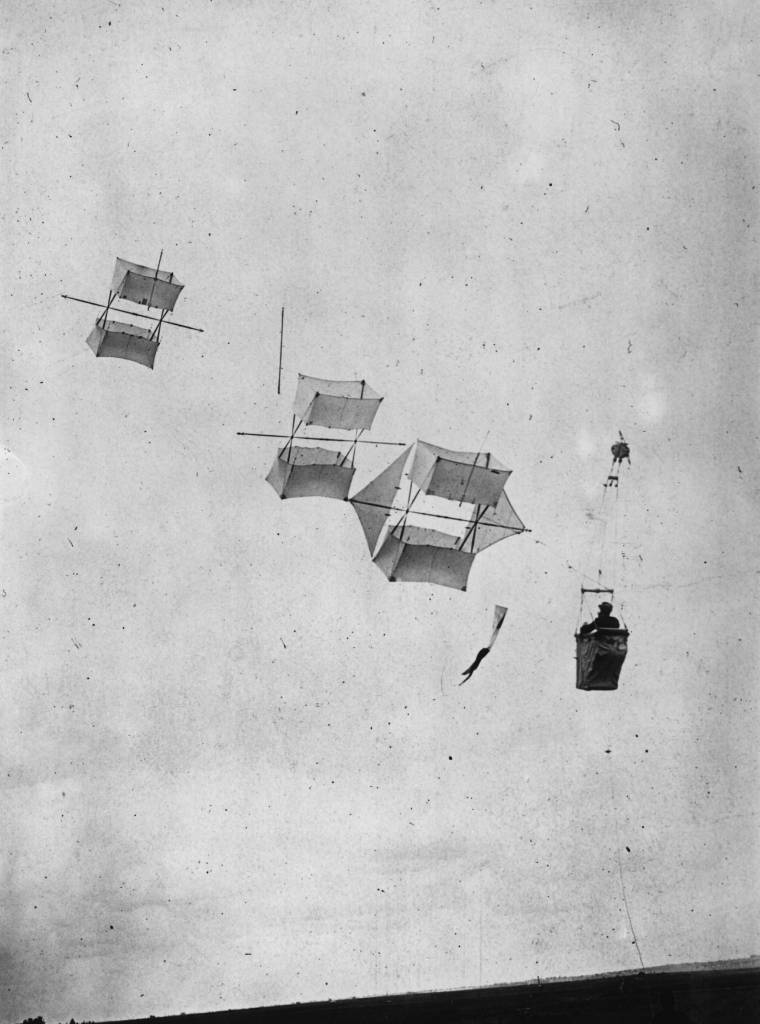 A man flying kite, used for observation purposes. Utilising the Madiot system of man lifters, developed from Cody’s design, it proved very effective. Madiot died in an air crash before the system was fully developed. 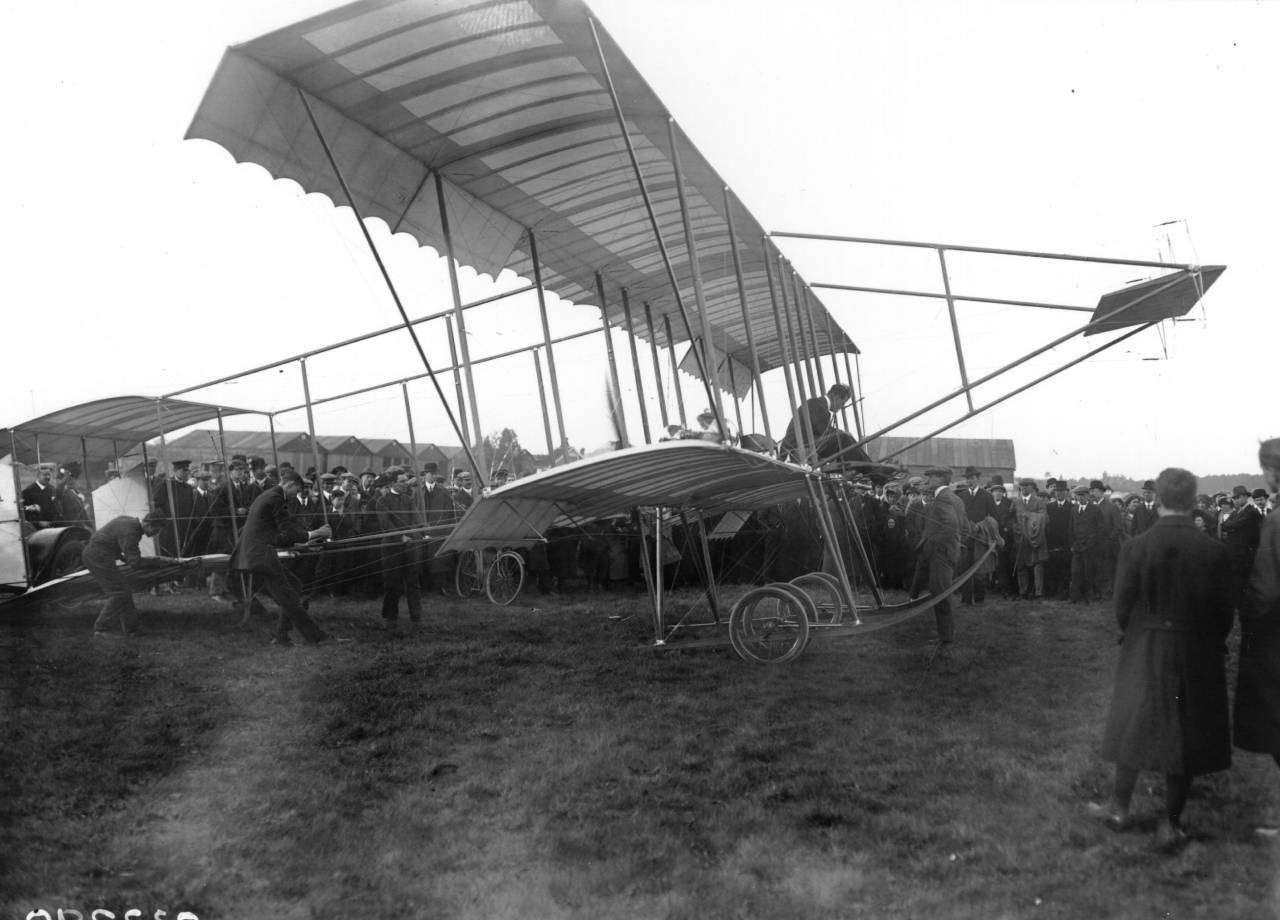 24th April 1911: A crowd at Brooklands gathers to watch a Bristol Box Kite bi-plane take off, with pilot Gilmour perched precariously above the wheels. 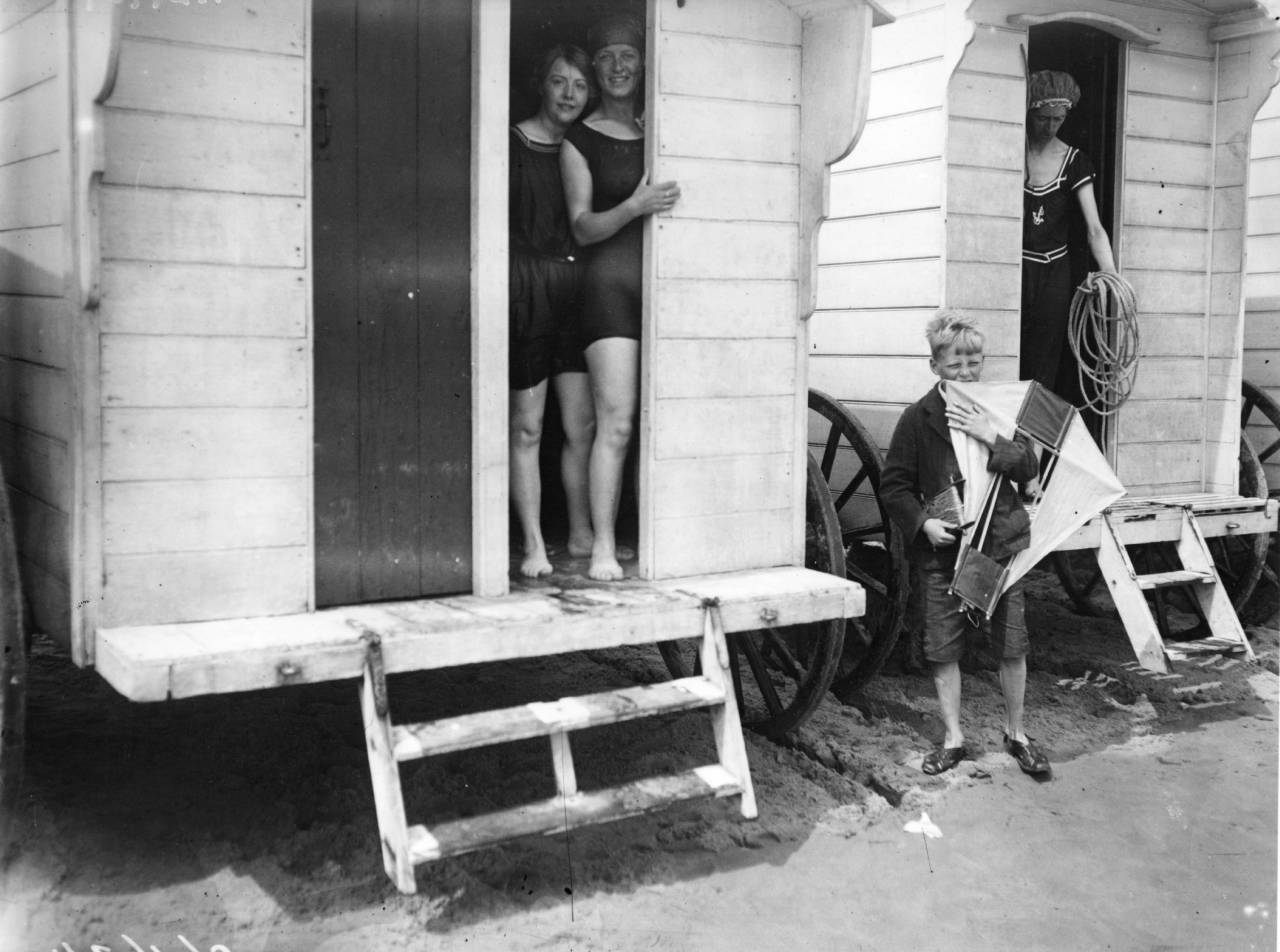 July 1914: Bathing huts and pleasure seekers on the beach at Gorleston. 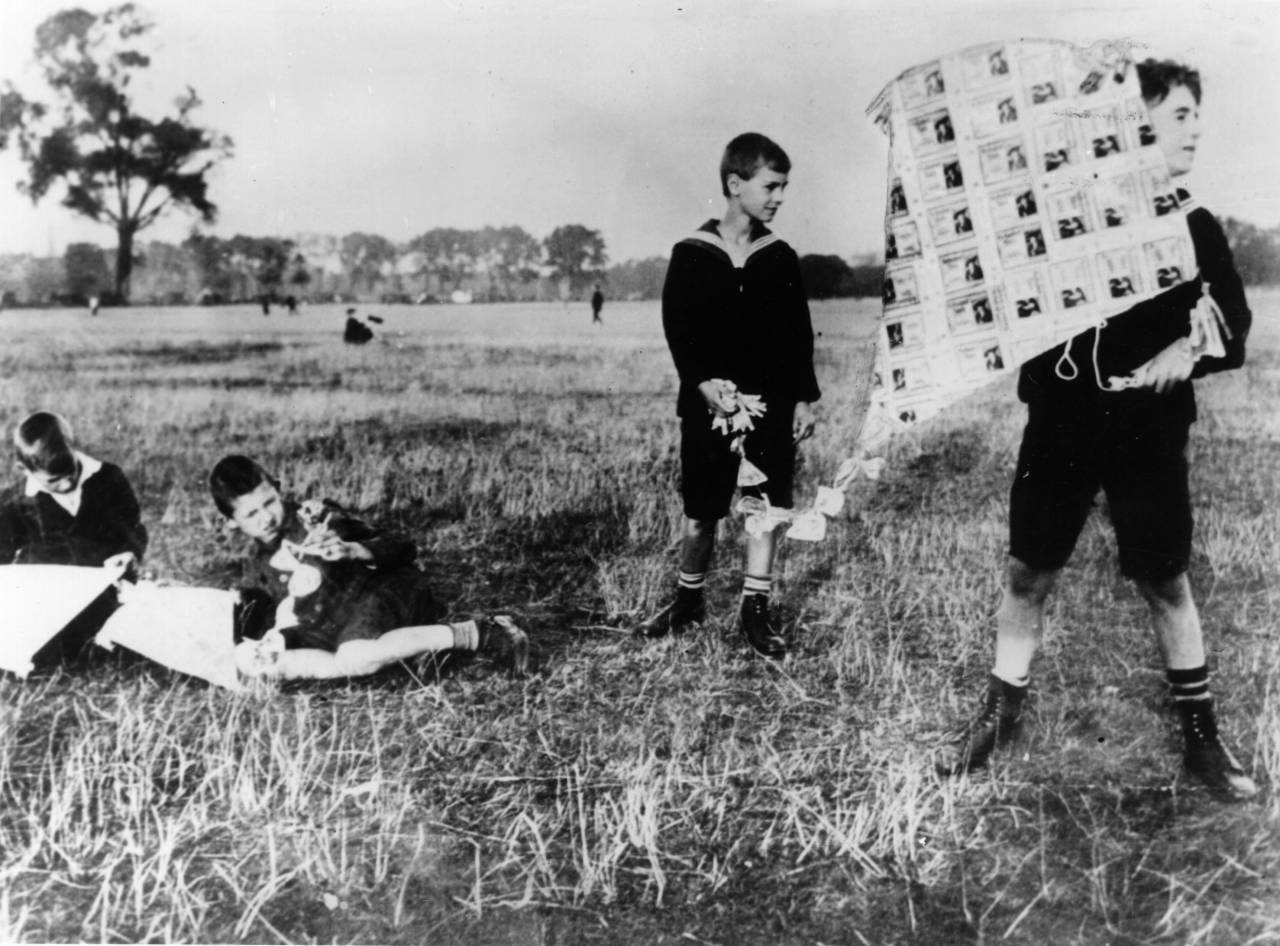 A boy with a kite made of banknotes in Germany, during the depression when escalating inflation rendered much currency worthless. 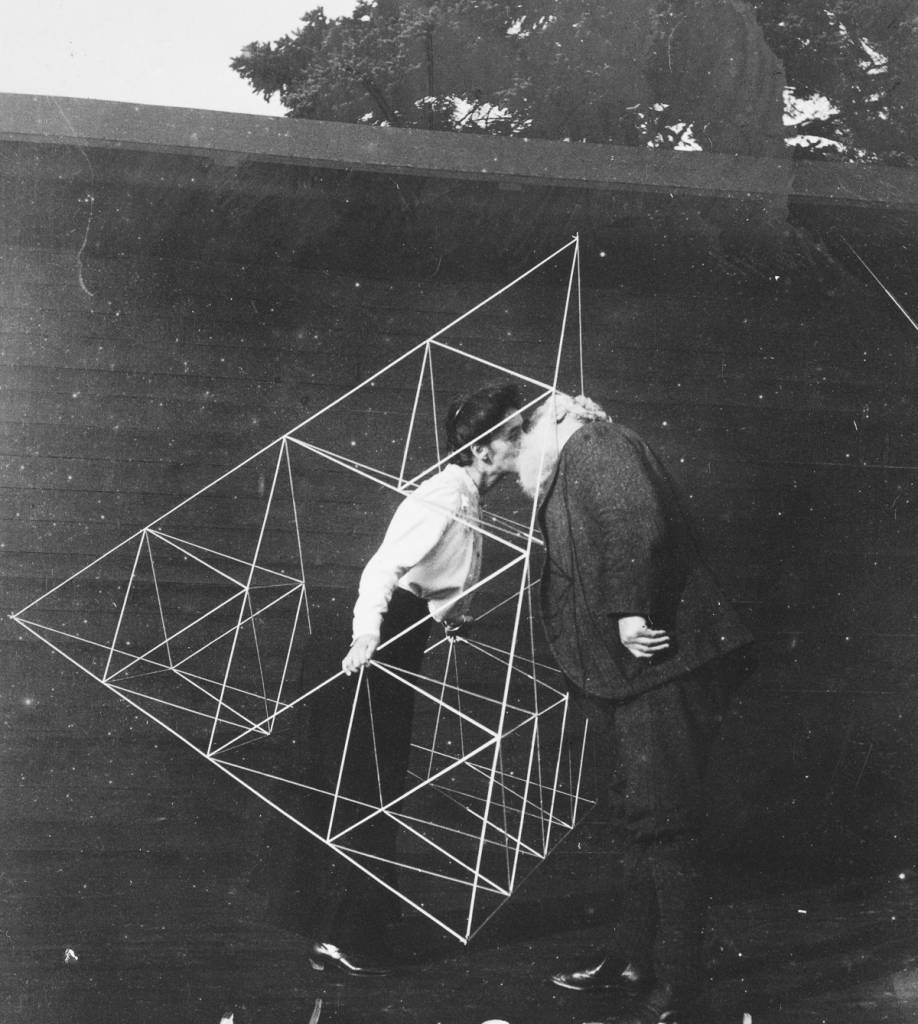 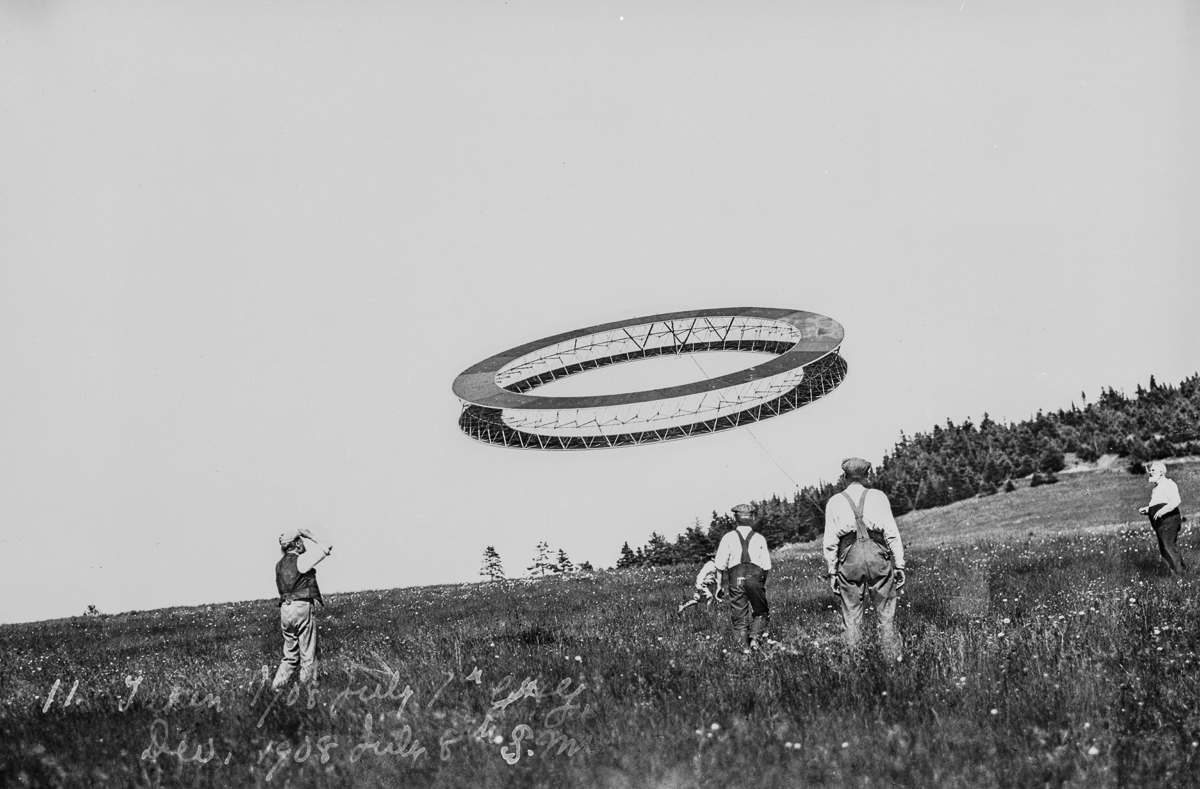 July 7, 1908
Alexander Graham Bell (right) and his assistants observe the flight of a circular tetrahedral kite.

Advertisement for the flying machine kite for children by the Zimmerman Flying Machine Company in Fremont, Ohio, 1902. 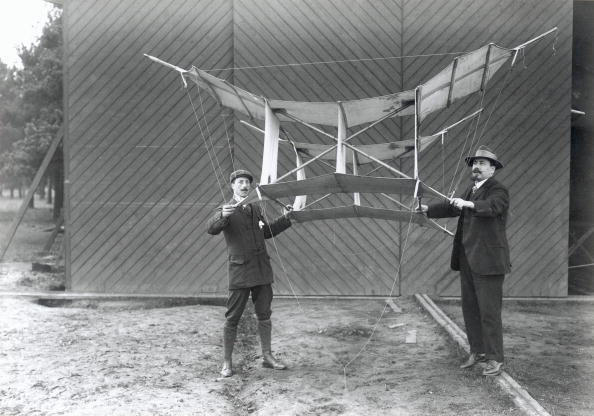 American-born Samuel Franklin Cody (1862-1913) obtained British nationality in 1896. He pioneered the manlifting kite as a means of military observation – the kite holds the observer while the cable is supported by several smaller kites. On 16th October 1908, Cody made the first powered flight in Britain in his British Army Aeroplane No 1 using a 50-hp Antoinette engine. He also took part in the planning and construction of the first British dirigible airship. He was killed in a flying accident at Farnborough, Hampshire, in 1913. 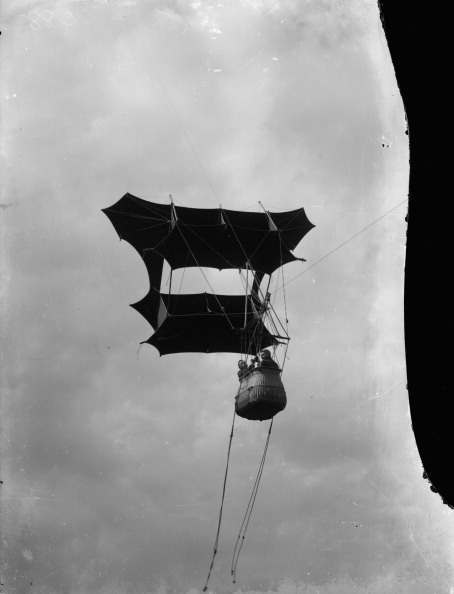 Aviation In Britain Before The First World War: The Work Of Samuel Franklin Cody In Airship, Kite And Aircraft Aeronautics 1903 – 1913, Demonstration of a two man kite designed by S F Cody for use by the British Army Royal Engineers Balloon Section. Such kites were intended for use when high wind speeds (above twenty miles an hour) prevented the use of observation balloons. The kite could ascend to heights of 2,500 feet in the right conditions, circa 1903. 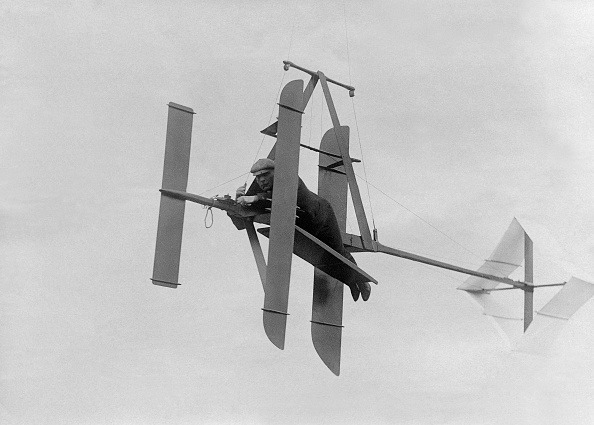 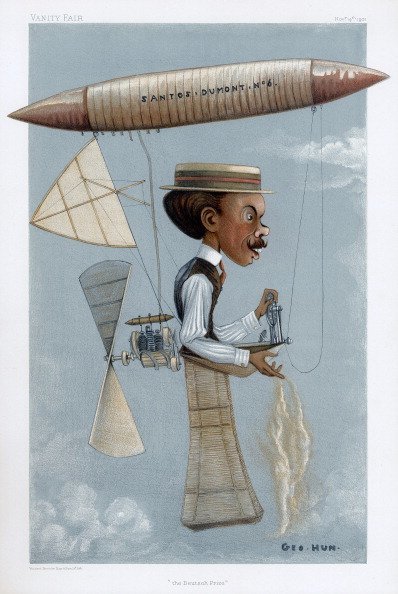 Alberto Santos-Dumont, Brazilian aviation pioneer, 1901. Santos-Dumont (1873-1932) made his first flight in the balloon ‘Brasil’ in 1898, and later that year his second balloon, ‘America’, remained in the air for 22 hours, winning him the Aero Club of Paris award. He solved the problem of steering airships when he circumnavigated the Eiffel Tower in his ‘Santos-Dumont no. 6′ dirigible in 1901 (pictured), for which he was awarded the Deutsch Prize. He later moved on to designing aeroplanes, and his ’14 bis’, an aeroplane with box-kite wings and tail which flew tail first made the first successful officially observed aeroplane flight in Europe in November 1906. His most successful aeroplane was the ‘Demoiselle’, built in 1909, which became a favourite with sporting pilots. Santos-Dumont became increasingly disillusioned with the use of aviation in warfare, and returned to Brazil, committing suicide in 1932. Cartoon from Vanity Fair, London, 14 November 1901. 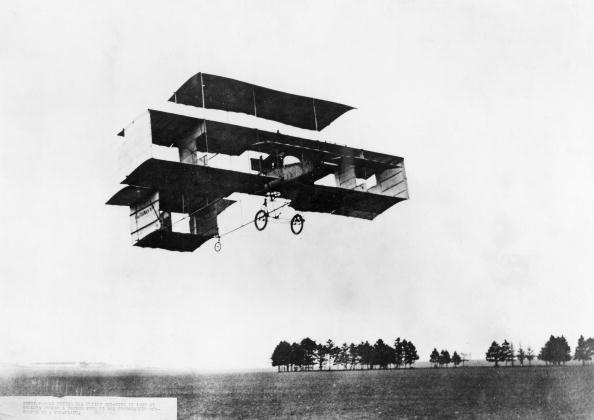 Henri Farman (1874-1958) flying his Voisin box-kite during a period when it was temporarily converted to a tri-plane. Henry Farman, the son of the Paris correspondent of the London Standard, took up flying after deciding it would be safer then racing motorcycles or cars. He became associated with the Voisin brothers, designers and builders of aeroplanes, and later became well known for his skill in handling the machines. On 13 January 1908, he made aviation history when he completed the first circular kilometer flight in Europe at Issy-les- Molineaux. 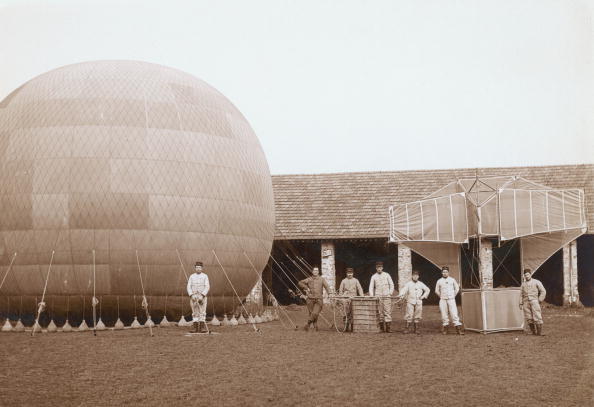 French military personnel with a tethered observation balloon and a kite, circa 1910. 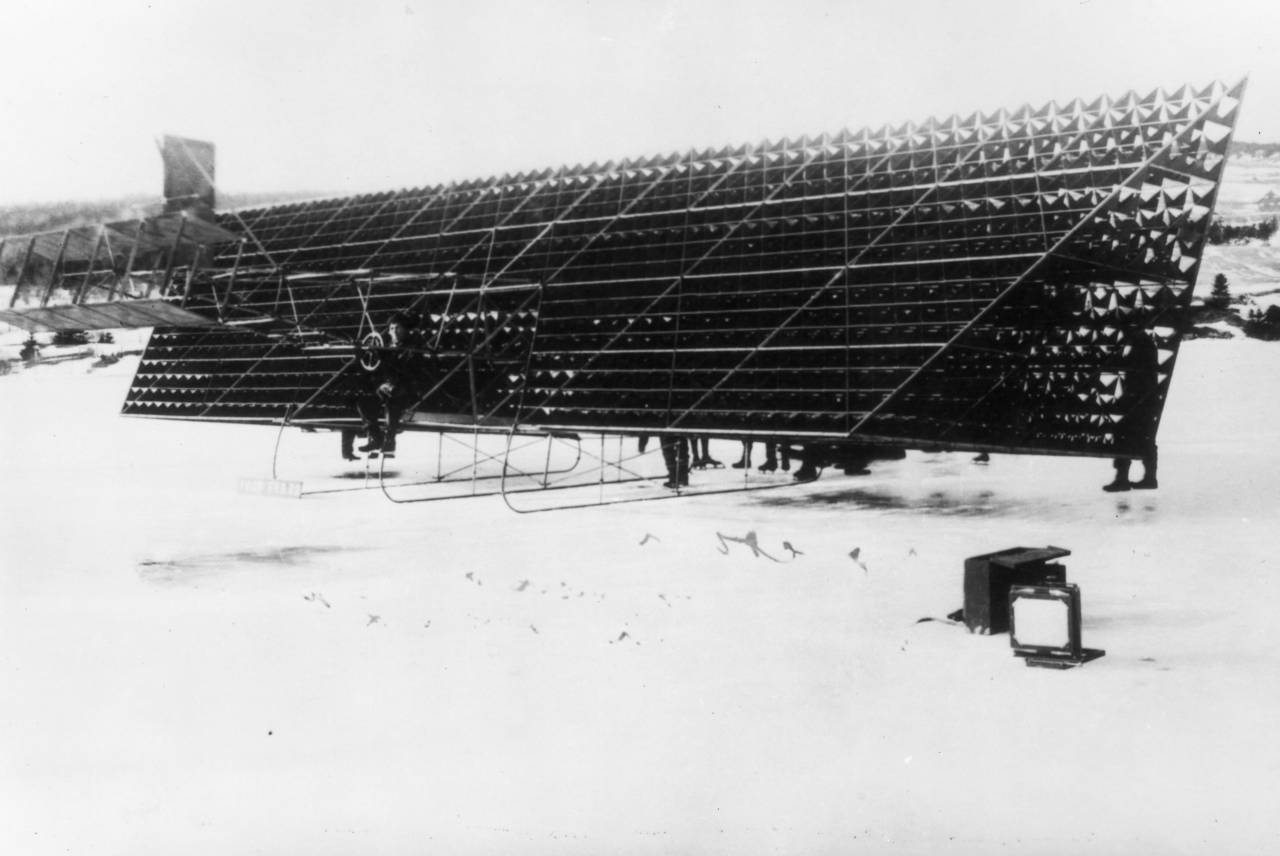 The Bell Cygnet ll, with tetrahedral-cell wing design. Designed by Alexander Graham Bell and built by the Aerial Experiment Association, the 5,000-cell multiplane was tested unsuccessfully in Nova Scotia in 1907. J A D McCurdy sits at the wheel. (Photo by Hulton Archive/Getty Images) 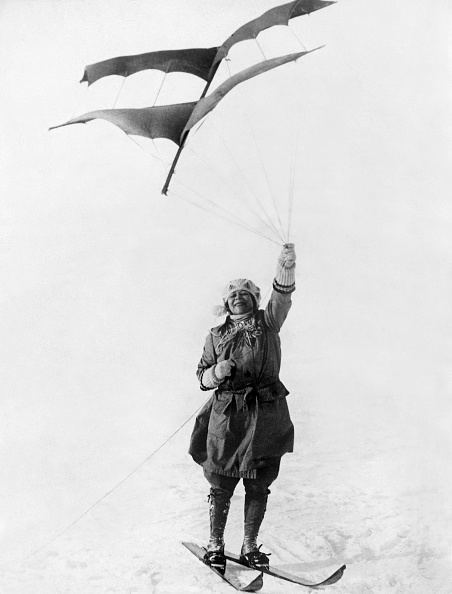 Norwegian woman skier being pulled by a kite – 1924 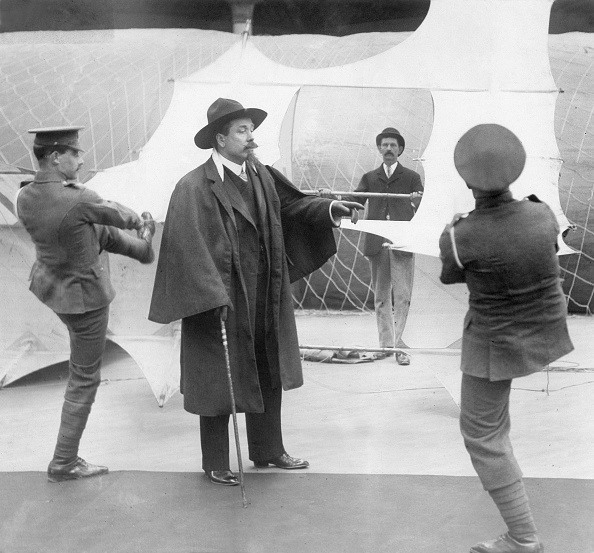 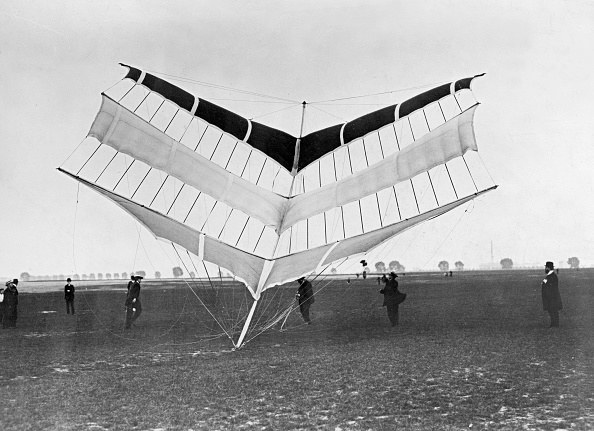 Prussia – Kite which can transport up to three persons in a basket. 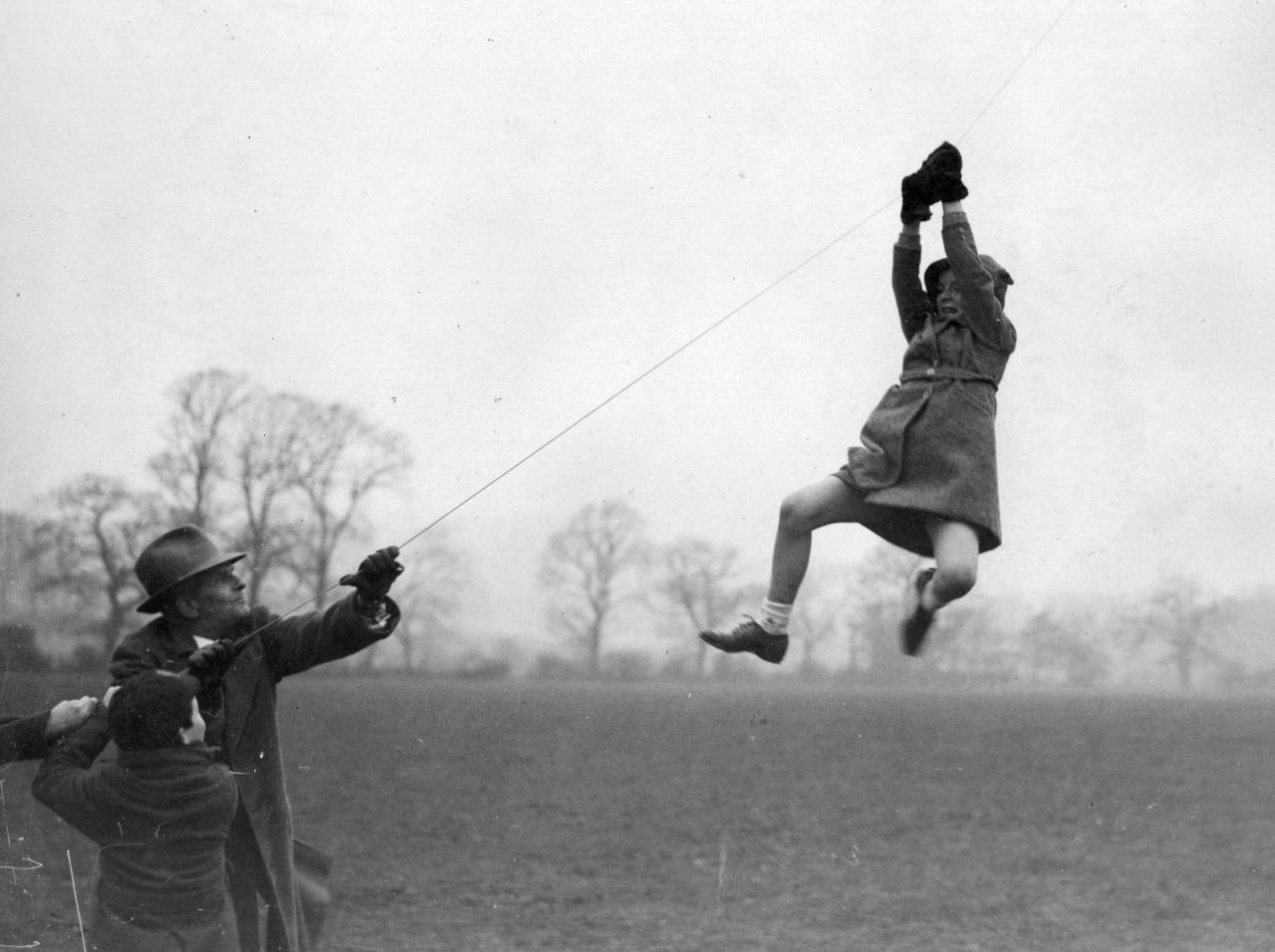 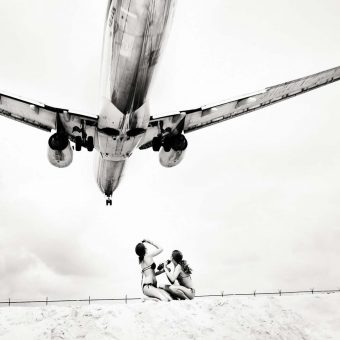 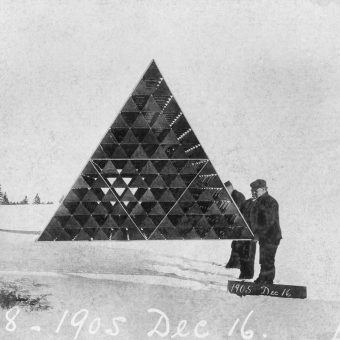 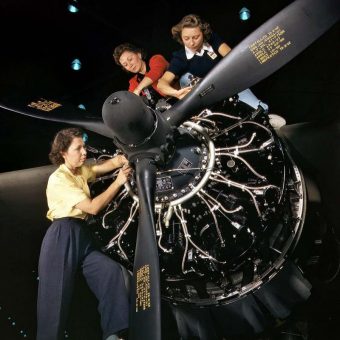 Life during wartime: 33 colour photographs of America during the Second World War