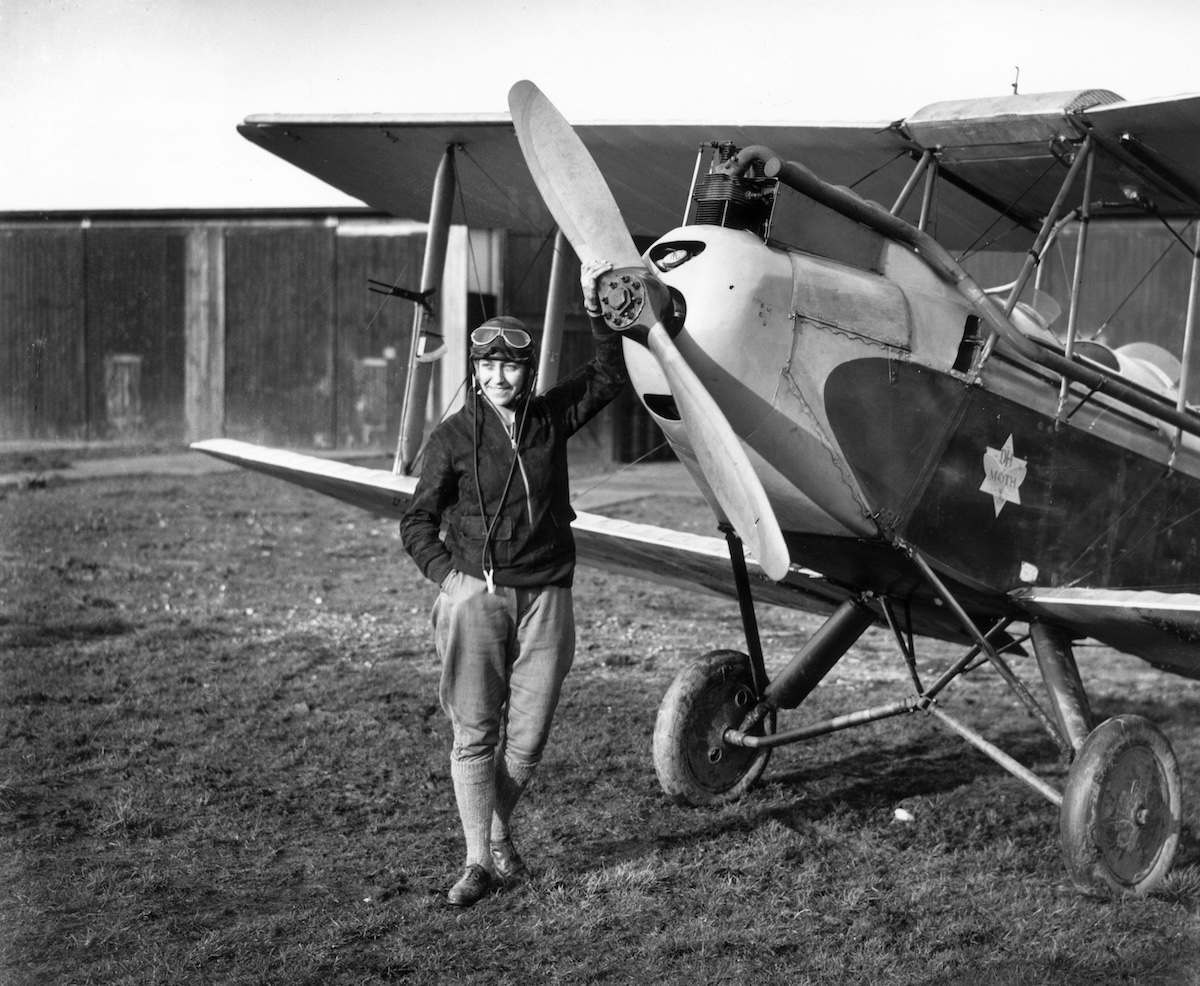 5th May 1930: 26-year-old English aviator Amy Johnson (1903 – 1941) standing in front of her Gipsy Moth just before she undertook a 19-day solo flight to Australia. She died in 1941 when an aircraft she was ferrying crashed into the Thames estuary. (Photo by Central Press/Getty Images)

On 5 May 1930, twenty-four year old Amy Johnson (or Johnnie as she liked to be called) set out from Croydon Airport in her de Havilland Gypsy Moth ‘Jason’. Johnson was the first woman recipient of the Air Ministry’s licensed engineer certificate, and was allowed to fly the planes manufactured by the De Havilland aircraft company, where she worked, since if a ‘slip of a girl’ could fly them, then anyone could. At the end of the journey she became the first woman to fly solo to Australia and the Manchester Guardian later wrote, “Certainly she ran very great risks in passing over savage countries and risks to a woman are greater than risks run by a man”.

Johnson initially was on course to break the record for the journey – she managed to get to Karachi in five days wearing ‘khaki shorts, puttees and a green sun helmet’ but bad weather and fuel shortages delayed her and in the end it took her nineteen and a half days to get to Brisbane. An impressive feat as she had only flown 100 hours solo while her longest flight had been from Hull (her hometown) to London. Johnson was met by extraordinarily enthusiastic crowds in Australia and was called ‘Queen of the Air’ and ‘Lady Lindbergh’ and received a congratulatory telegram from George V.

When Johnson returned to London the short trip from Croydon Airport took two and a half hours as crowds stood four or five deep along the route. The Daily Herald called Johnson’s achievement as ‘the vindication of womanhood’. She was given a CBE for the historic flight and on hearing the news said “Isn’t it just marvellous!” The Women’s Freedom League was less impressed with the award and thought that it showed no sense of proportion The League thought the CBE more suitable for the general secretary to the Northumberland Miners’ Association or the honorary technical adviser to the Area Gas Supply Committee rather than the first solo aviatrix to fly solo to Australia. 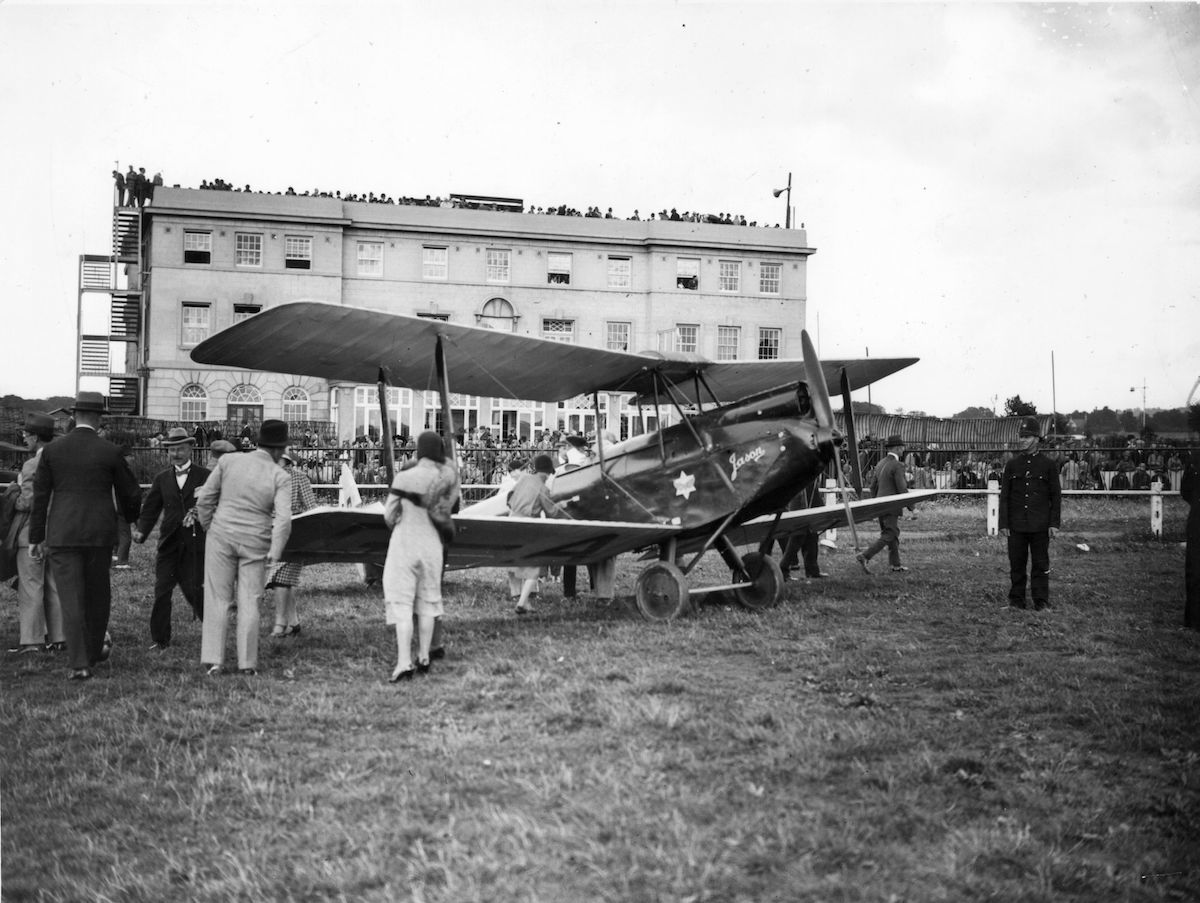 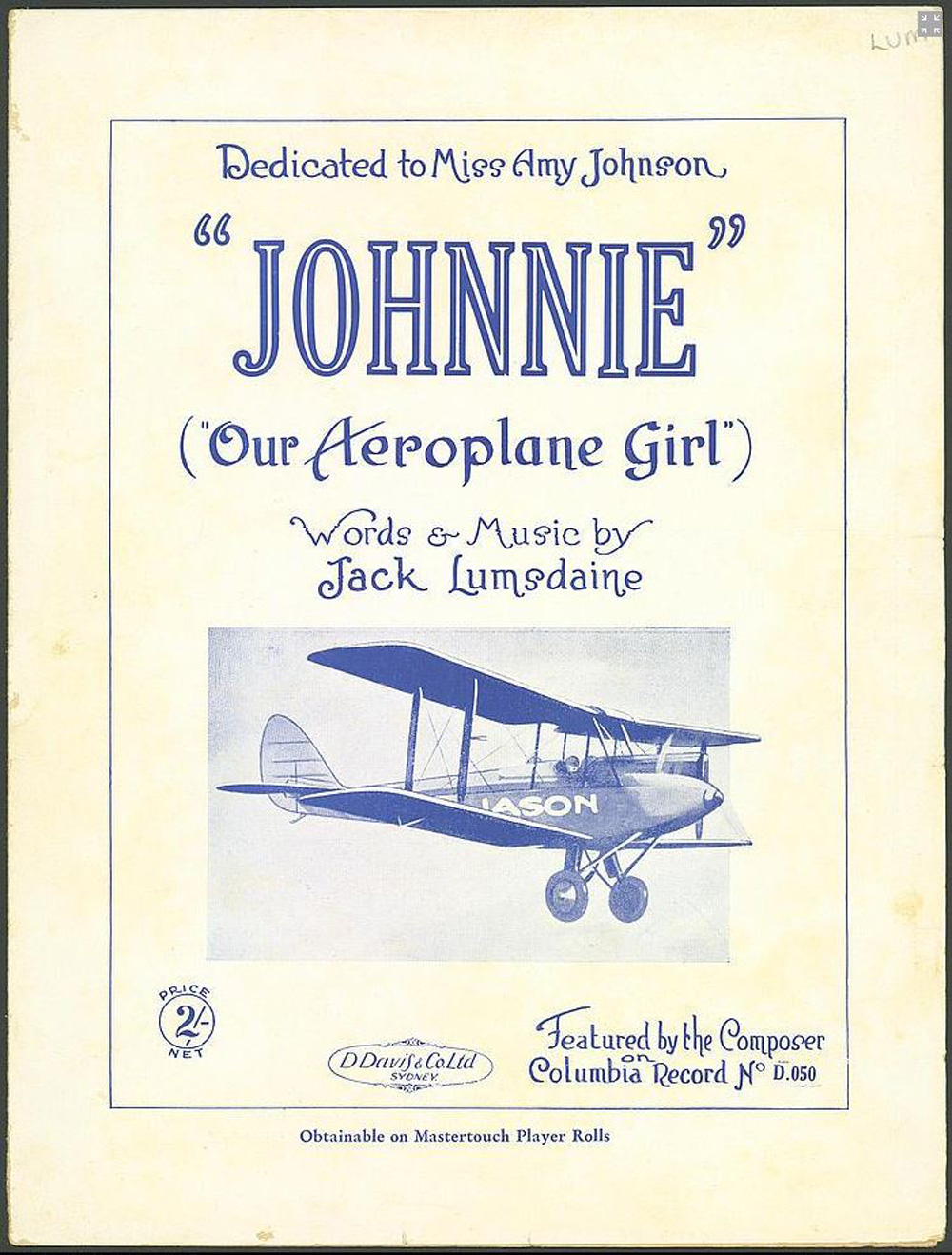 Cover of sheet music for the song Johnnie, our aeroplane girl by Jack Lumsdaine 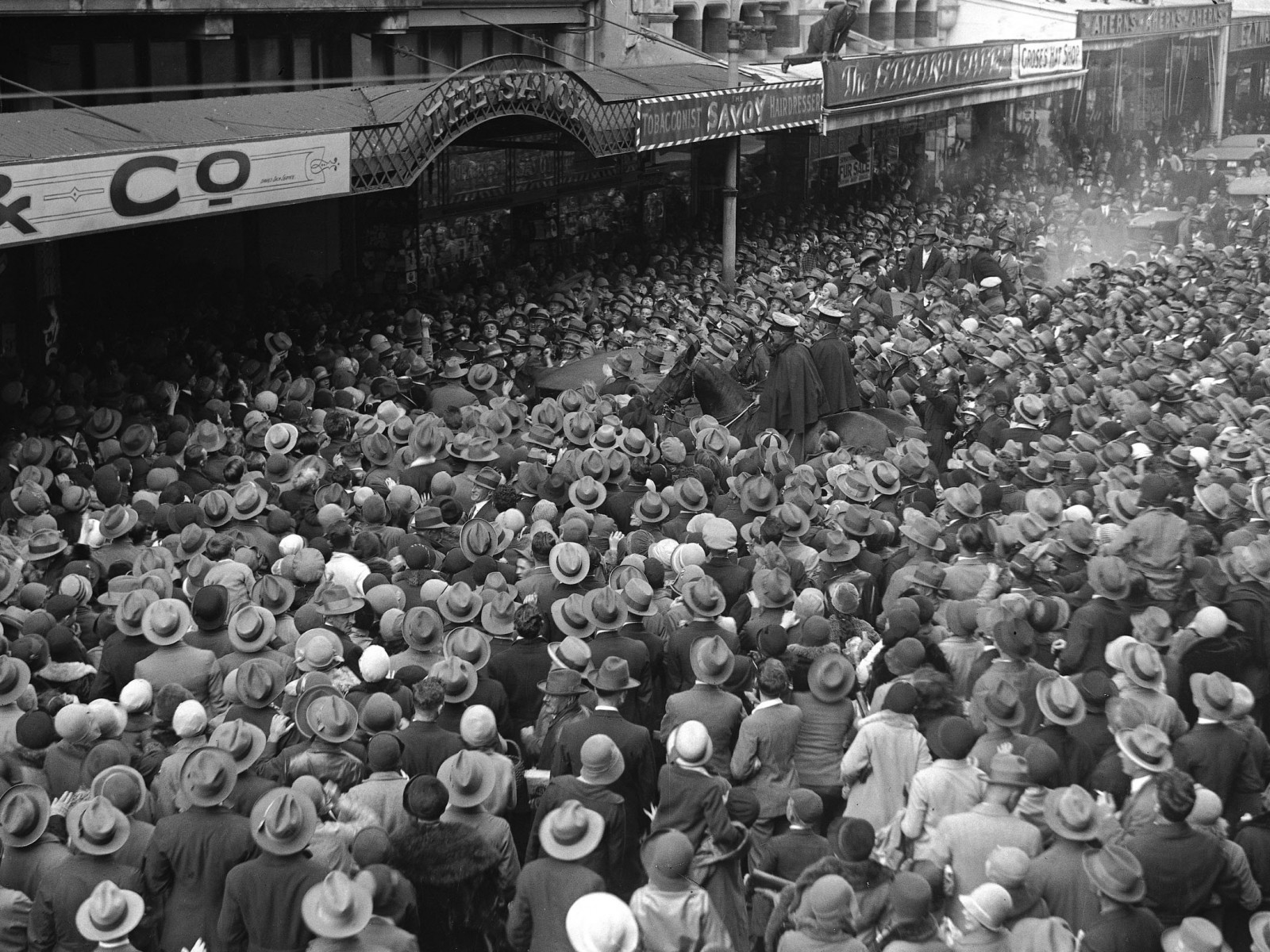 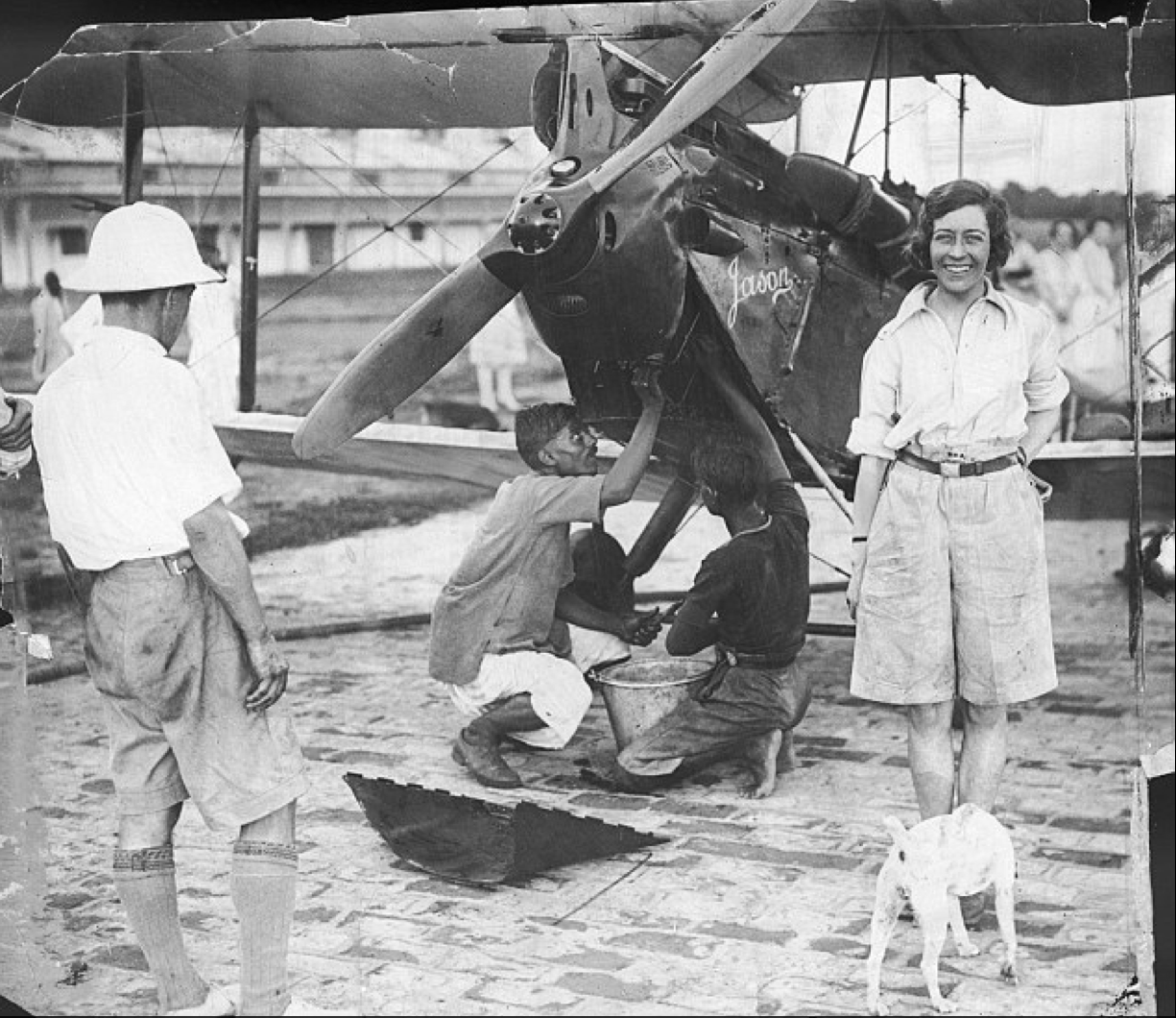 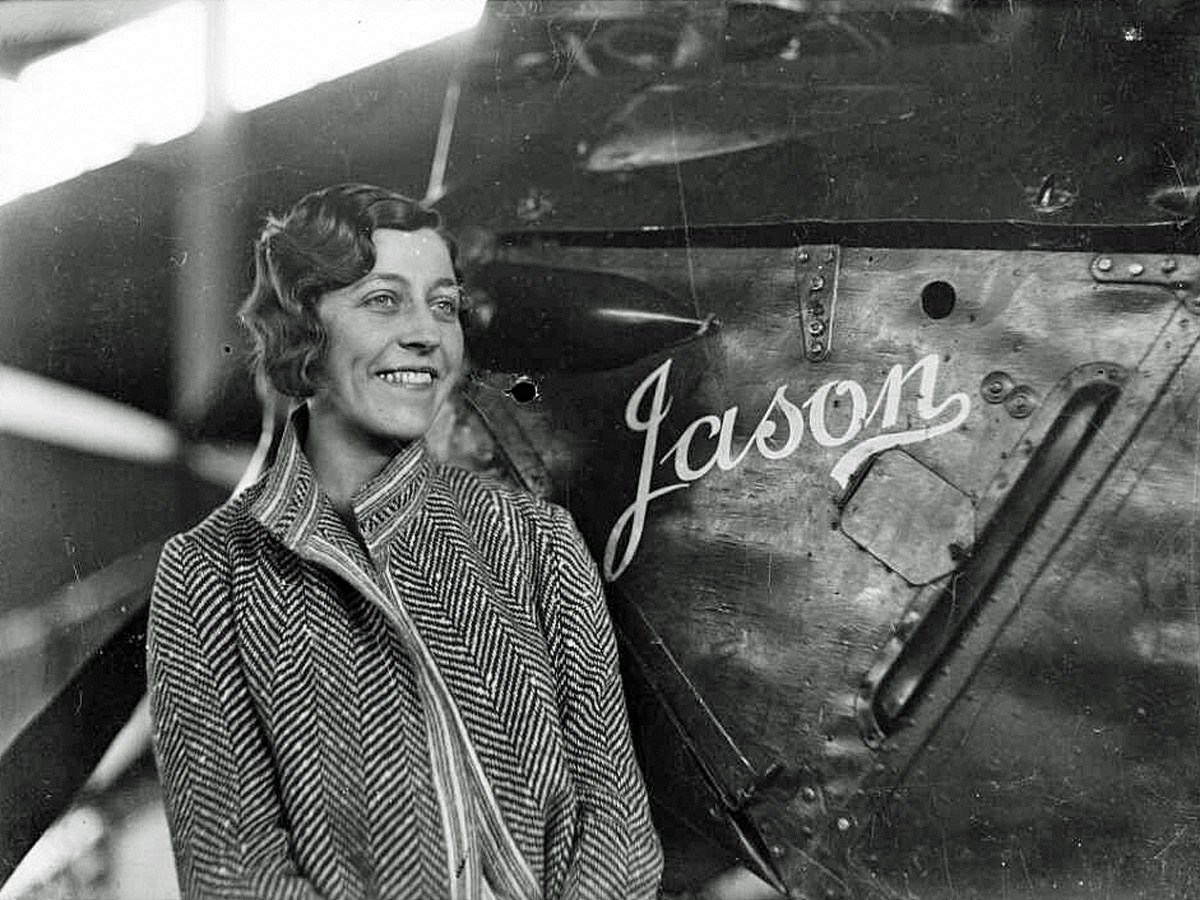 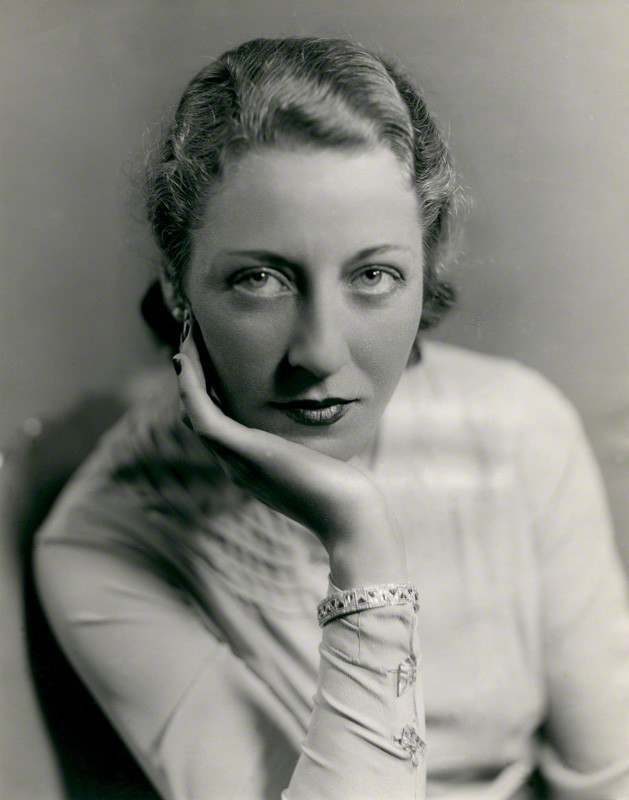 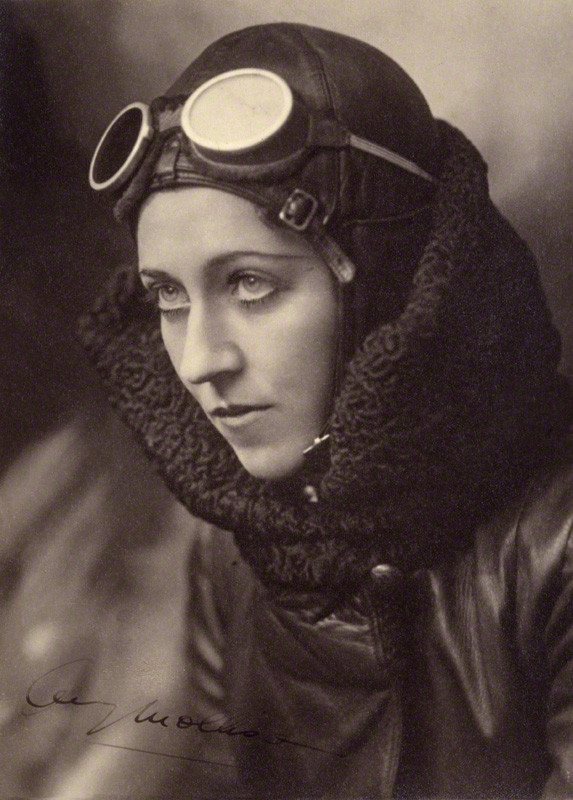 Amy Johnson by John Capstack, c.1934. Courtesy of the NPG.

Despite never learning proper technical navigational skills (she mostly found her way by following roads, coastlines and rivers) she managed more record-breaking flights over the next few years including London to Moscow in less than a day, and then on to Tokyo with the whole journey taking ten days in July 1931. Lympne in Kent to Cape Town, 6,200 in a Puss Moth in four days, six hours and fifty four minutes. 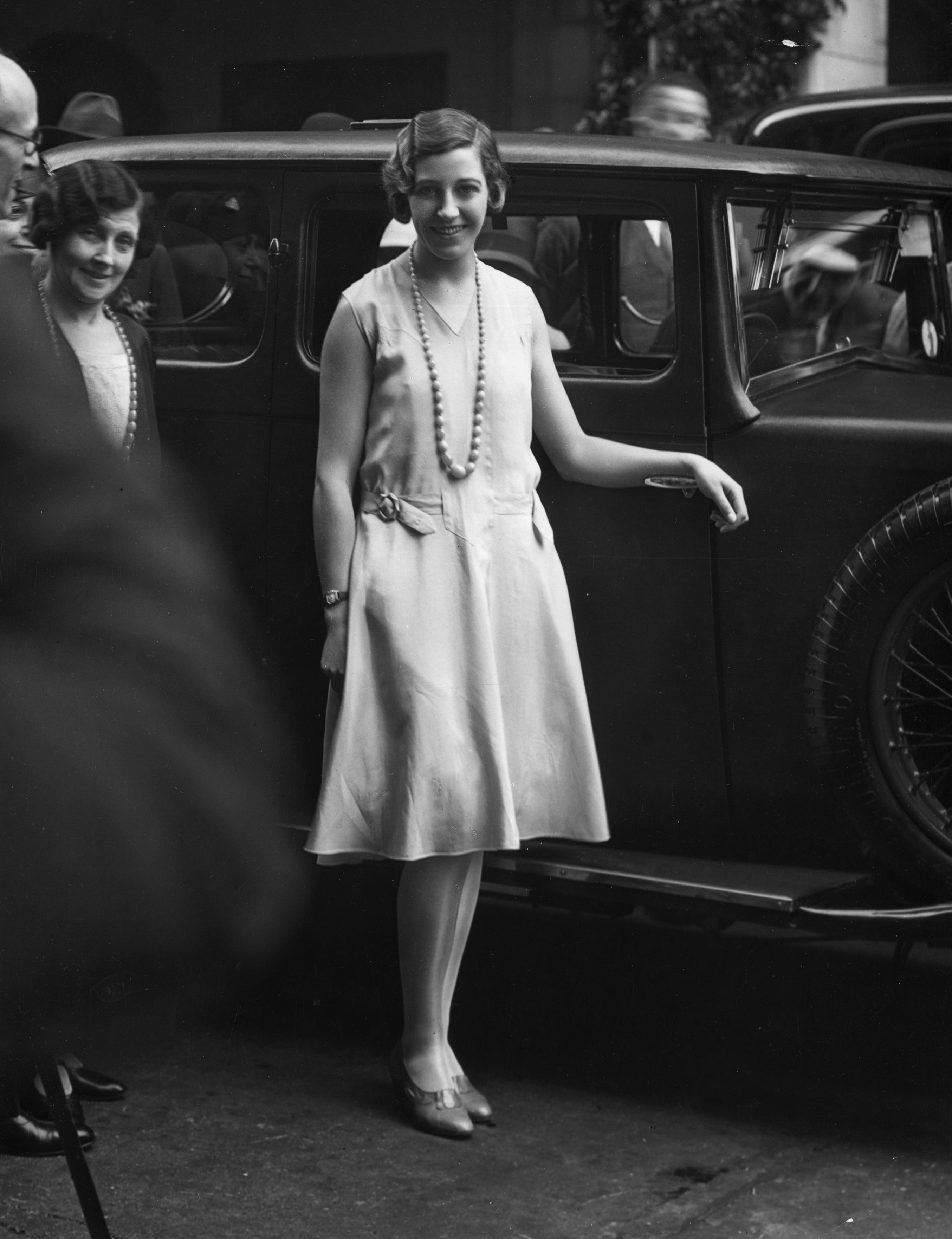 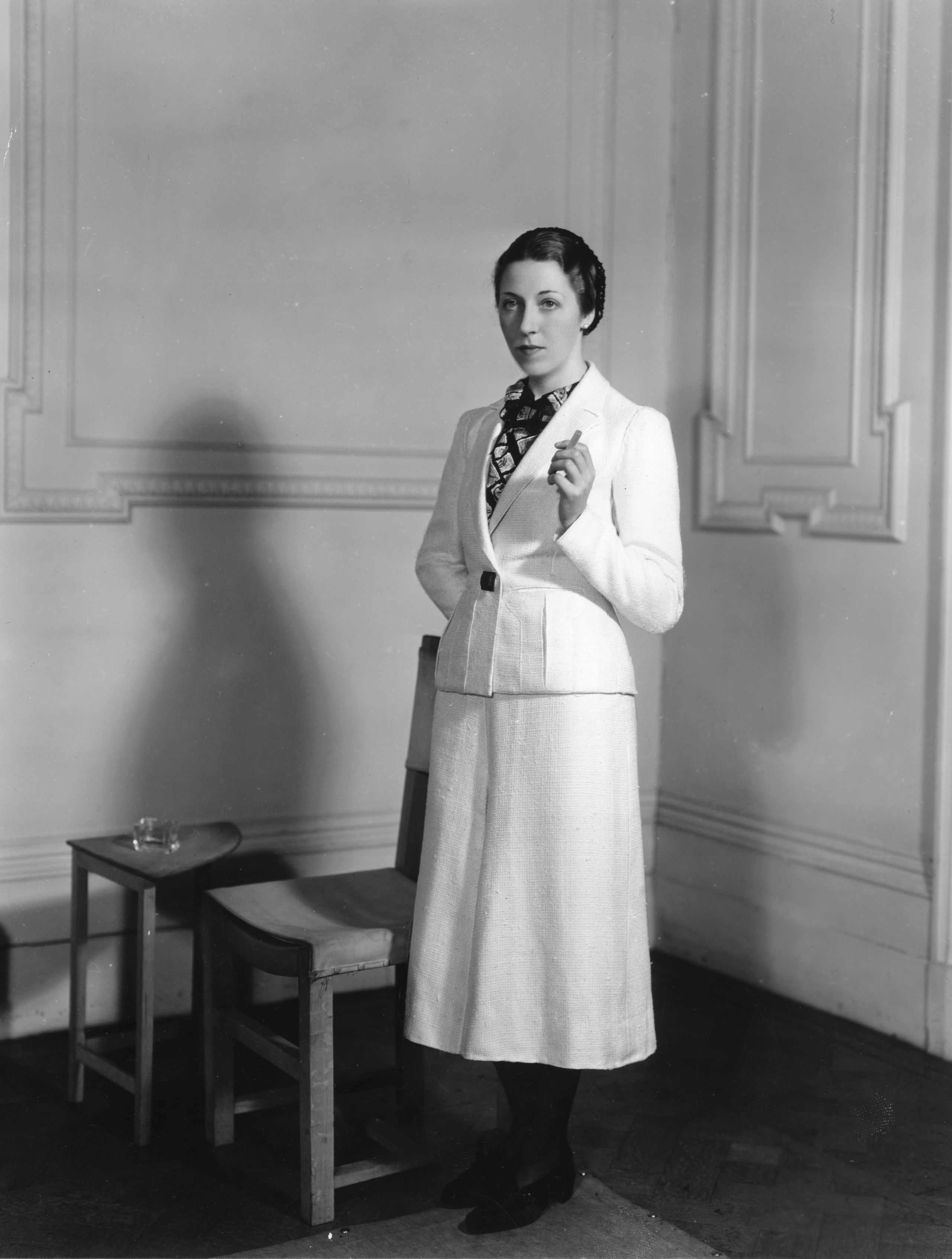 1st April 1936: English aviator Amy Johnson (1903 – 1941) wearing a woollen suit from the collection of flight clothes designed by Madame Schiaparelli for her solo flight from London to Cape Town. (Photo by Sasha/Getty Images) 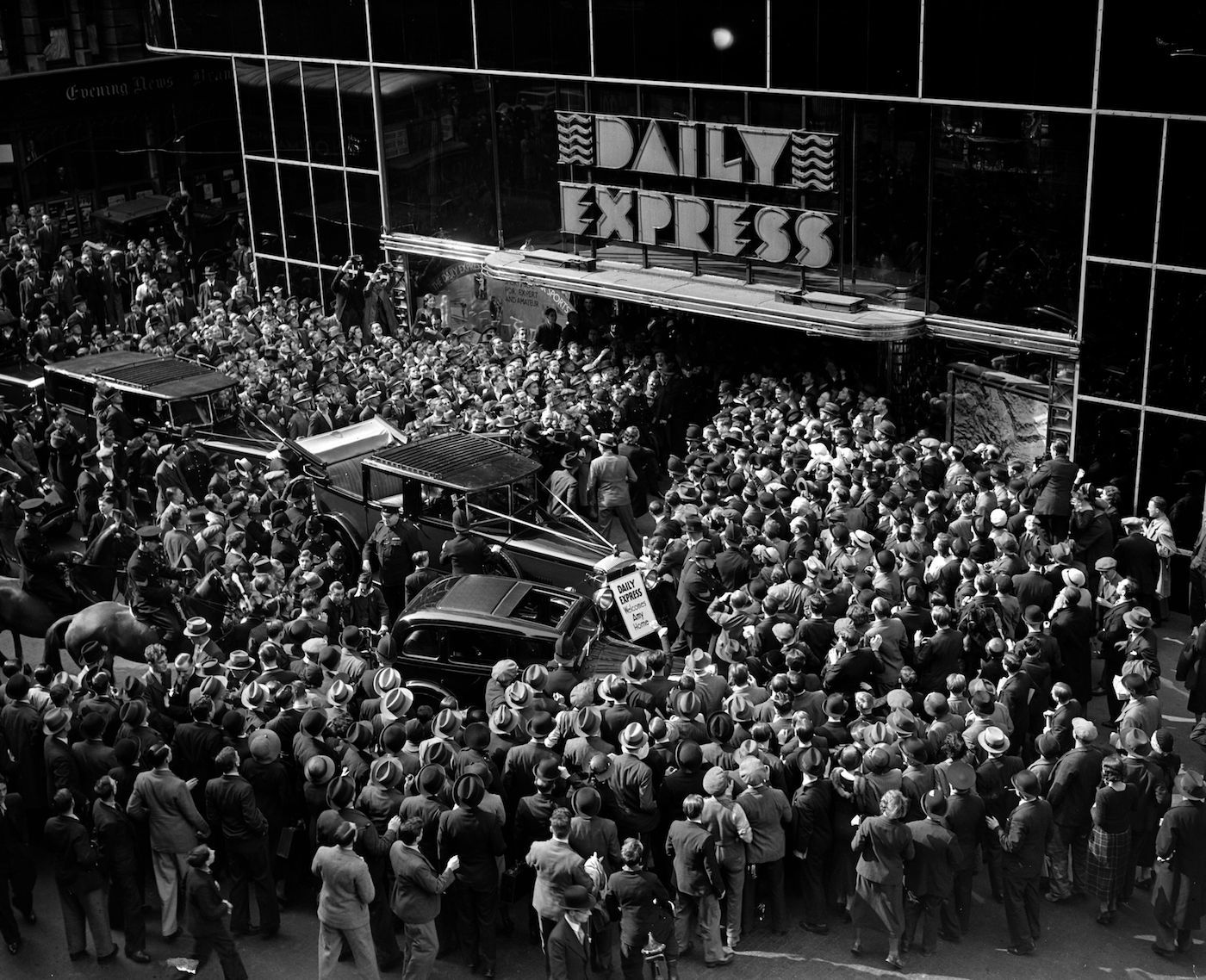 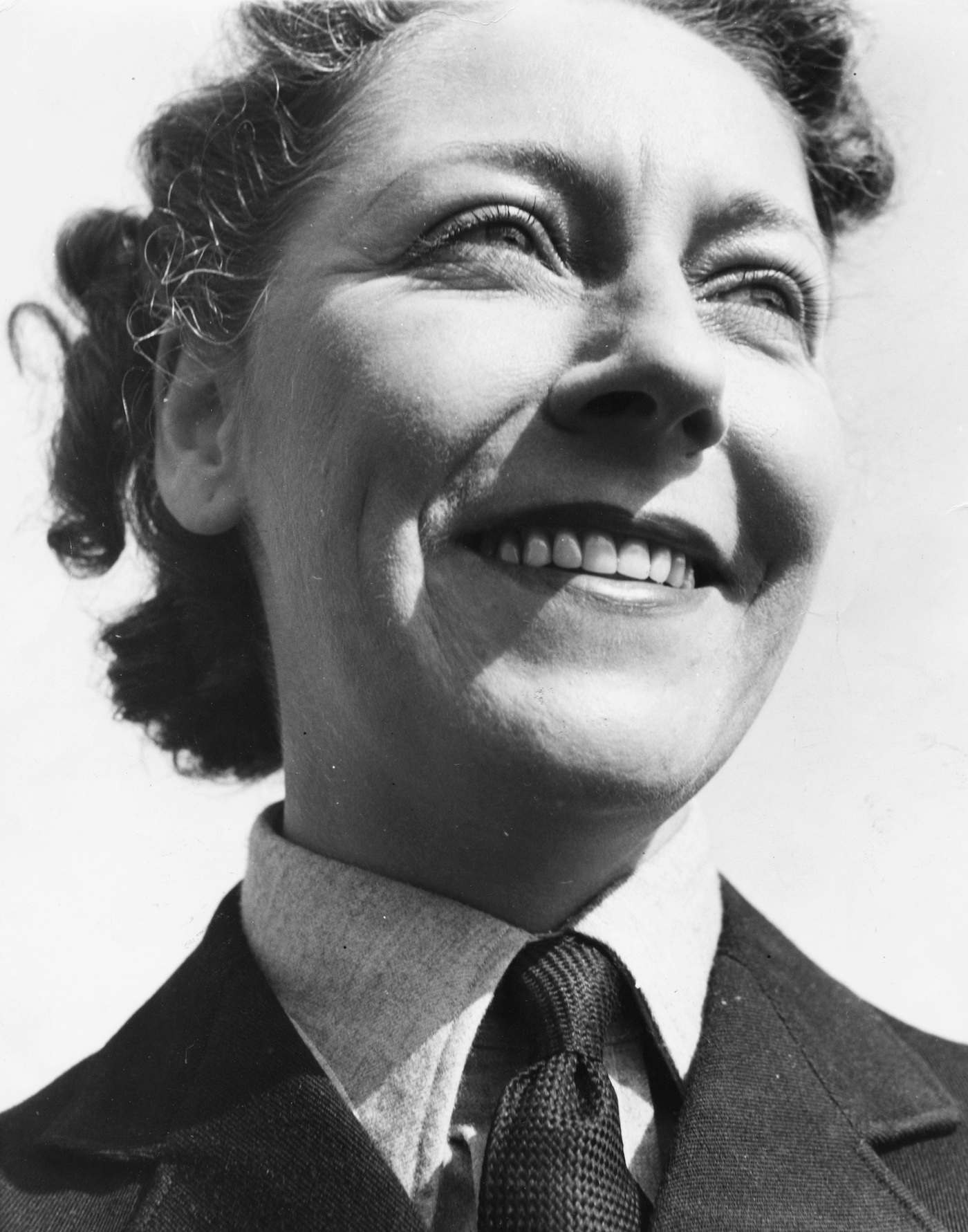 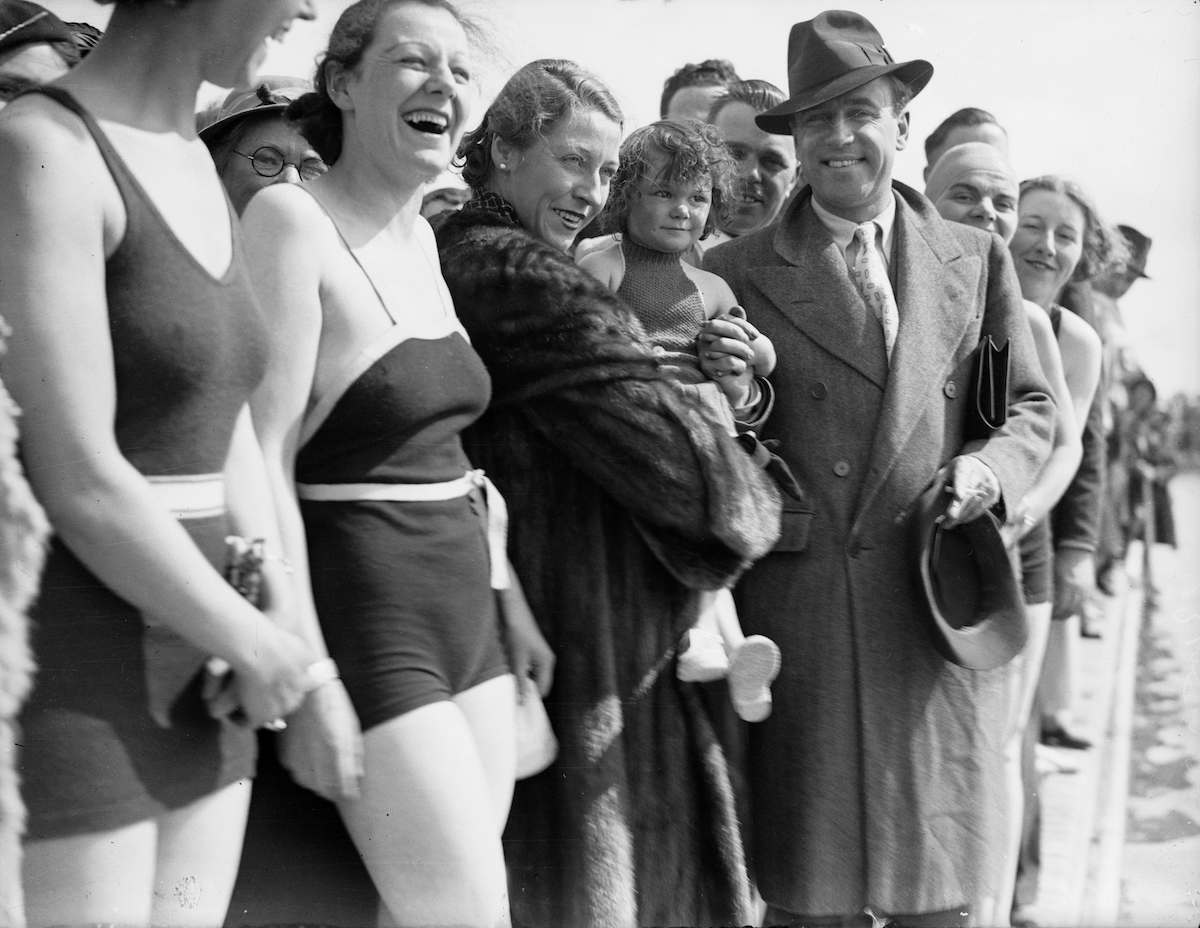 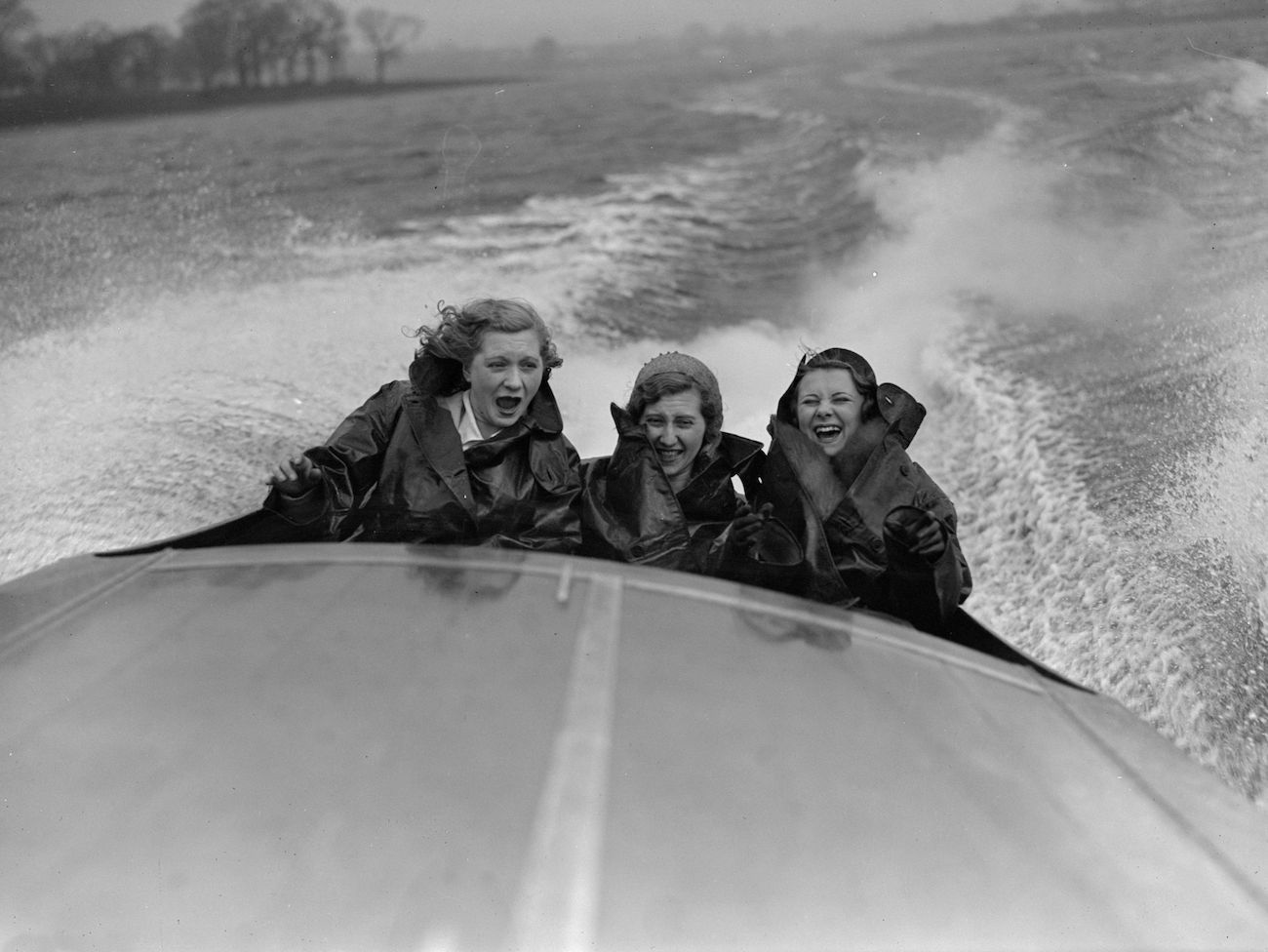 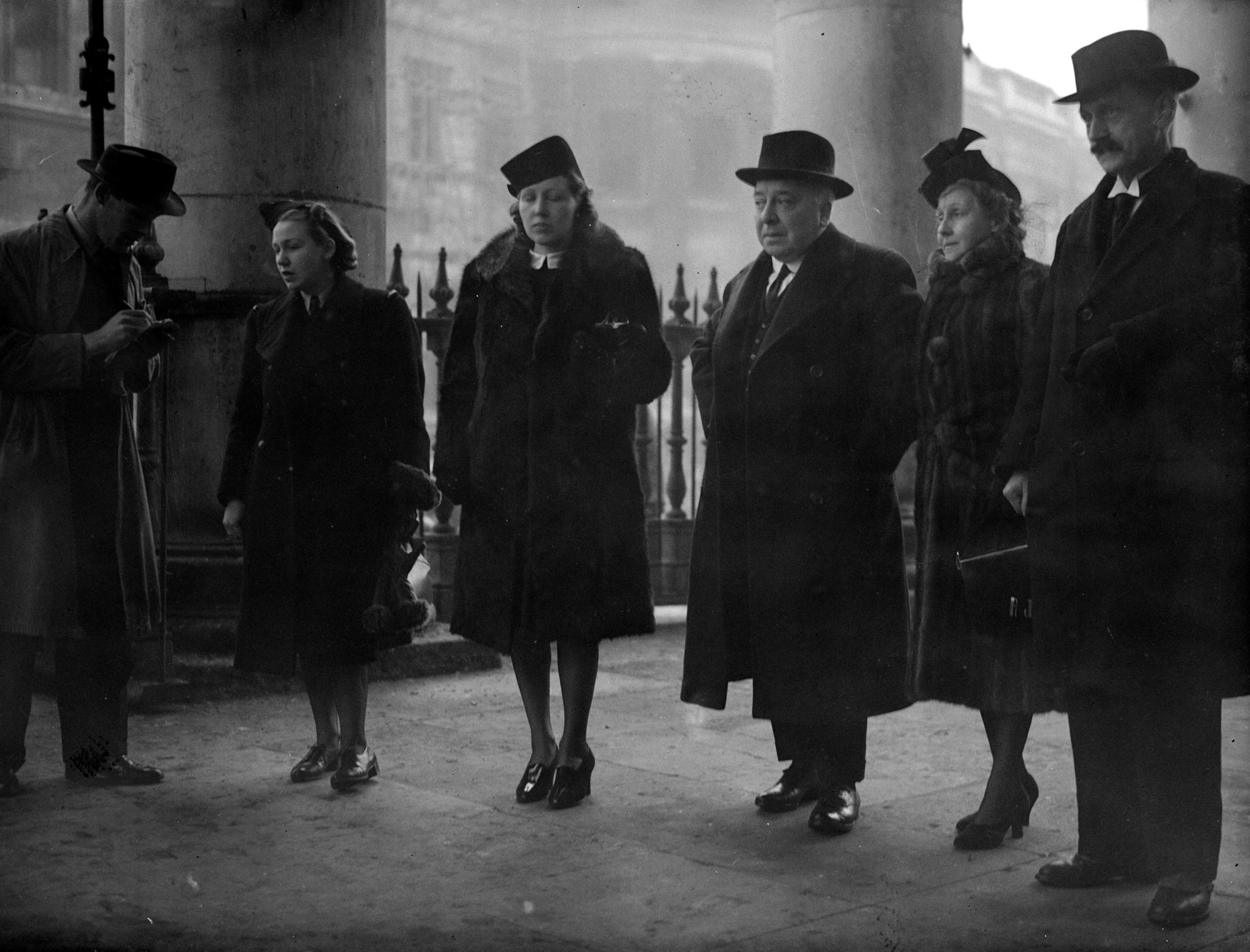 14th January 1941: Relatives arriving at the church of St Martin-in-the-fields to attend the memorial service for aviation pioneer Amy Johnson (1903 – 1941). Johnson was killed after in January 1941 after bailing out of her aircraft over the Thames Estuary while flying for the Air Transport Auxiliary. Among the relatives are Amy Johnson’s father (centre) and Betty Johnson (left) in ATA uniform. (Photo by Denn/Keystone/Getty Images)

In 1940, during the Second World War, Johnson joined the newly formed Air Transport Auxiliary (ATA), whose job was to transport Royal Air Force aircraft around the country – and rose to First Officer.

On 5 January 1941, while flying an Airspeed Oxford for the ATA from Prestwick via Blackpool to RAF Kidlington near Oxford, Johnson went off course in adverse weather conditions. Reportedly out of fuel, she bailed out as her aircraft crashed into the Thames Estuary. It has been said that her plane was shot down by ‘friendly fire’ when she said the wrong code-word over the radio.

The crew of the HMS Haslemere saw Johnson’s parachute coming down and saw her alive in the water and heard a woman calling for help. The sea was rough with a strong tide, snow was falling and the water was particularly cold. Walter Fletcher, the commander of Haslemere, dived into the water in an attempt to rescue Johnson. However, he failed in the attempt and died in hospital a few days later. The current pushed Johnson close to the ship. A sudden swell sent the Haslemere lurching forward and the crew were unable to pull it back in time and the ship’s stern crashed down on Johnson who was sucked into the blades of the propeller. Johnson’s body was never recovered.

A memorial service was held for Johnson in the church of St. Martin in the Fields on 14 January 1941. Walter Fletcher was posthumously awarded the Albert Medal in May 1941.

As a member of ATA who has no known grave, she is (under name of Amy V. Johnson) commemorated by the Commonwealth War Graves Commission on the Air Forces Memorial at Runnymede 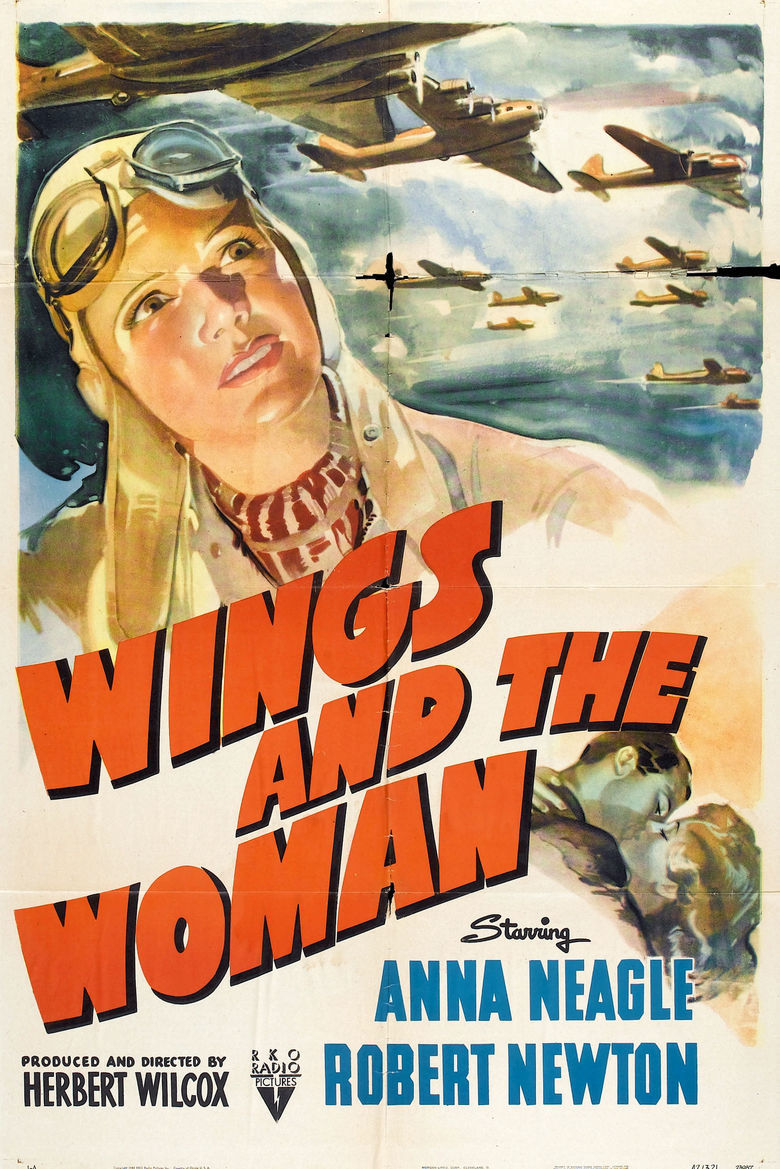 They Flew Alone (aka Wings and the Woman) 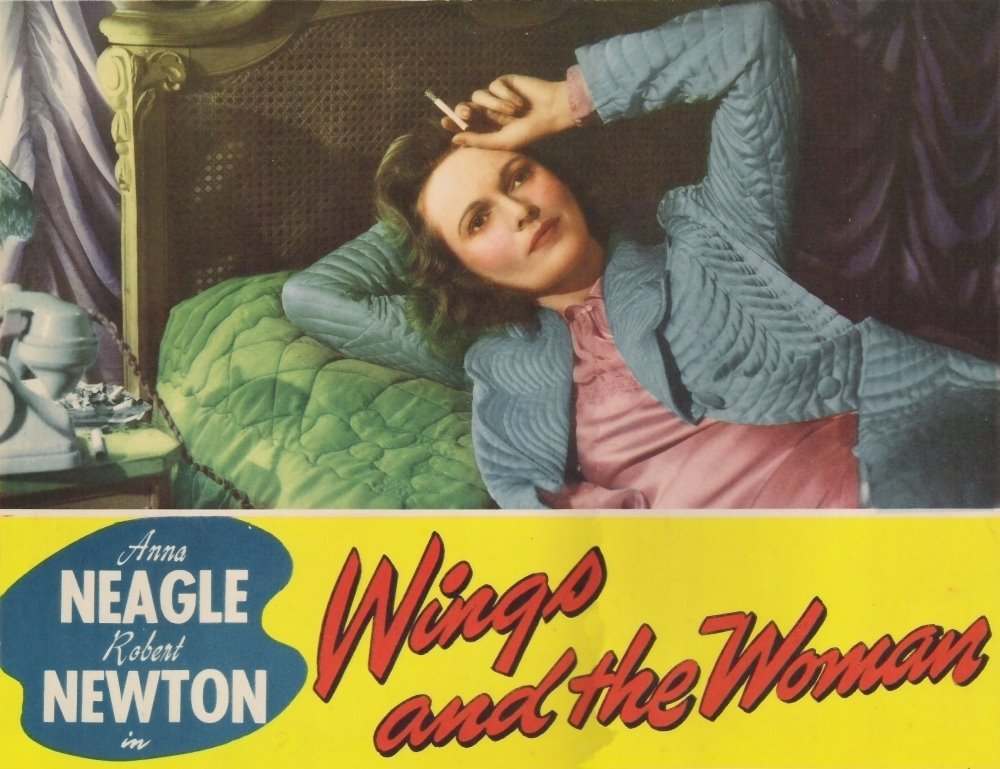 In 1942, a film of Johnson’s life, ‘They Flew Alone’, was made by director-producer Herbert Wilcox, starring Anna Neagle as Johnson, and Robert Newton as Mollison. The movie is known in the United States as ‘Wings and the Woman’.