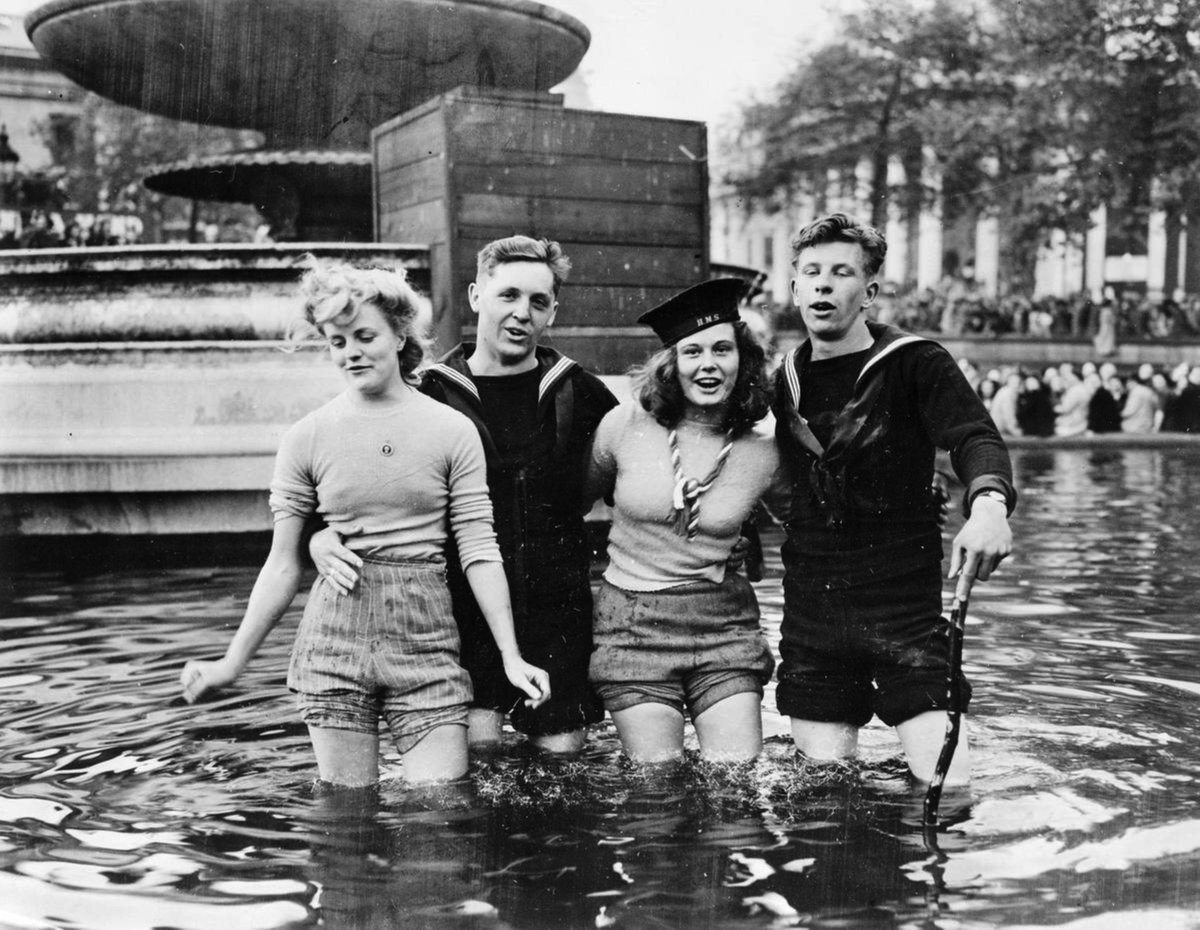 The Daily Telegraph’s went with “GERMANY CAPITULATES!,  followed by ‘To-day is VE Day: “Complete and Crushing Victory”. Of course the other newspapers joined in with celebratory VE Day headlines. After all there was a lot to celebrate. The official day for the celebrations was on 8 May 1945, although after a radio announcement the previous evening many people decided the black out was over and all over the country people pulled back the curtains and the blinds and walked out into the street to see what it looked like. By early afternoon the next day people were gathering in the West End of London by their hundreds of thousands. Many people were wearing paper hats. Harold Nicolson walking through Trafalgar Square that afternoon thought them “horrible, being of the comic variety” .At three o’clock in the afternoon everyone stopped to listen to Churchill’s victory speech he had written the night before: “the evil-doers now lie prostrate before us” he said with a flourish and everyone cheered. Loudspeakers had been connected everywhere.

Model and actress Christabel Leighton-Porter made her way to perform at the Kilburn Empire in London. She was famous as the model for the famous Daily Mirror cartoon strip ‘Jane’, and that evening, in honour of VE Day, she had decided to pose on stage as a semi-nude Britannia, draped in a Union Flag but, best of all, wearing a helmet the fire brigade leant her.

The crowds in front of Buckingham Palace have spilled into Green Park and in the evening deckchairs and park benches were passed via a human chain and thrown onto a massive bonfire.

After celebrating VE Day in front of Buckingham Palace, Noel Coward walked back to the Savoy Hotel, where he’d been ensconced since his home was bombed in 1941, with his friend, the composer Ivor Novello, who has a flat nearby. At about midnight Coward wrote in his diary later: ‘I suppose this is the greatest day in our history.’ 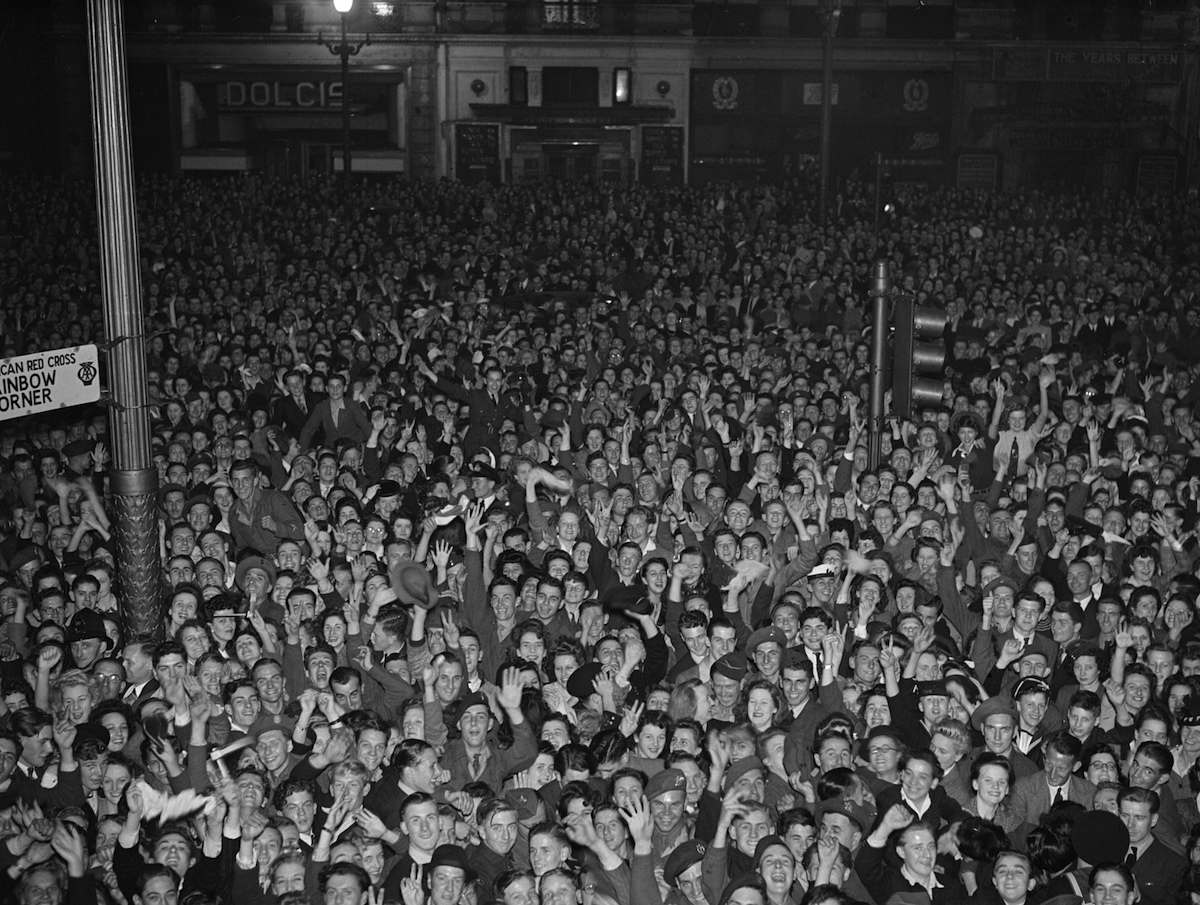 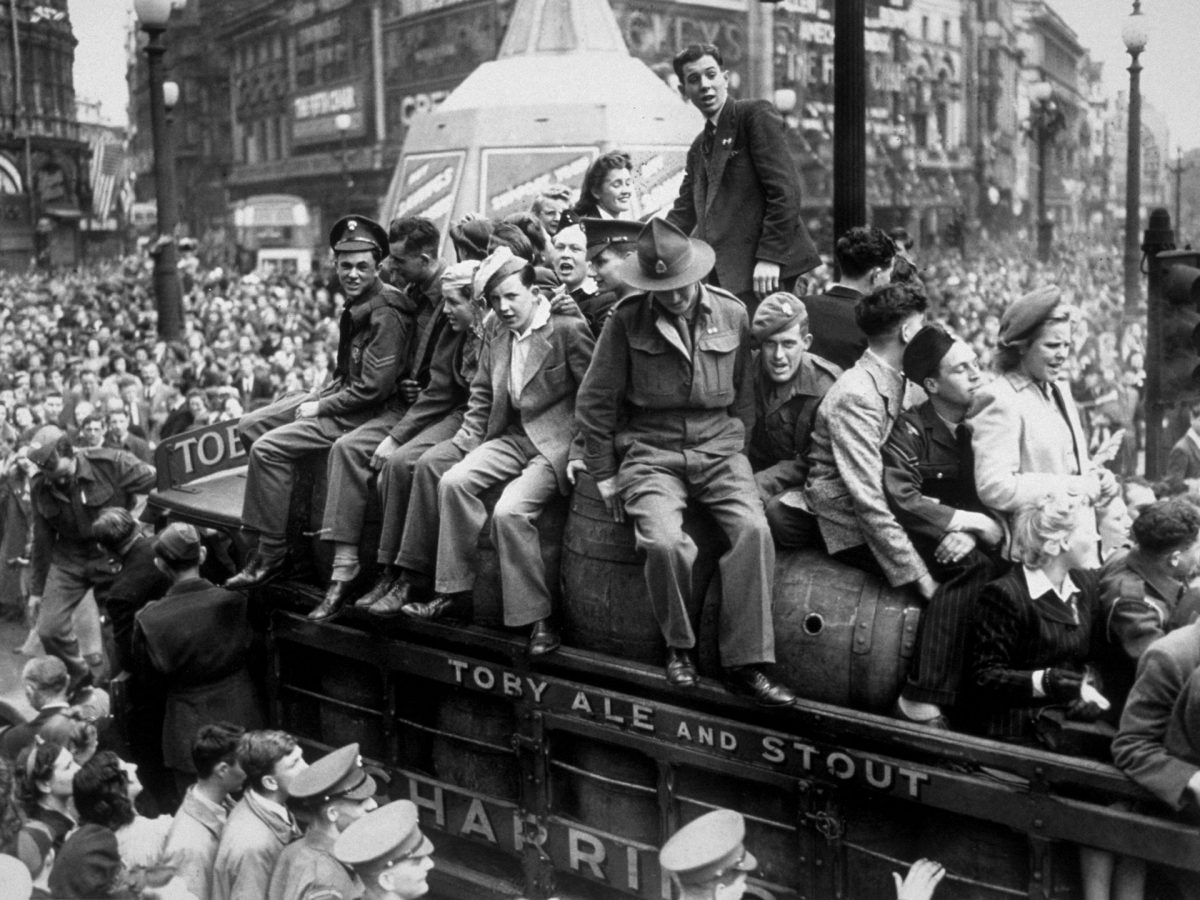 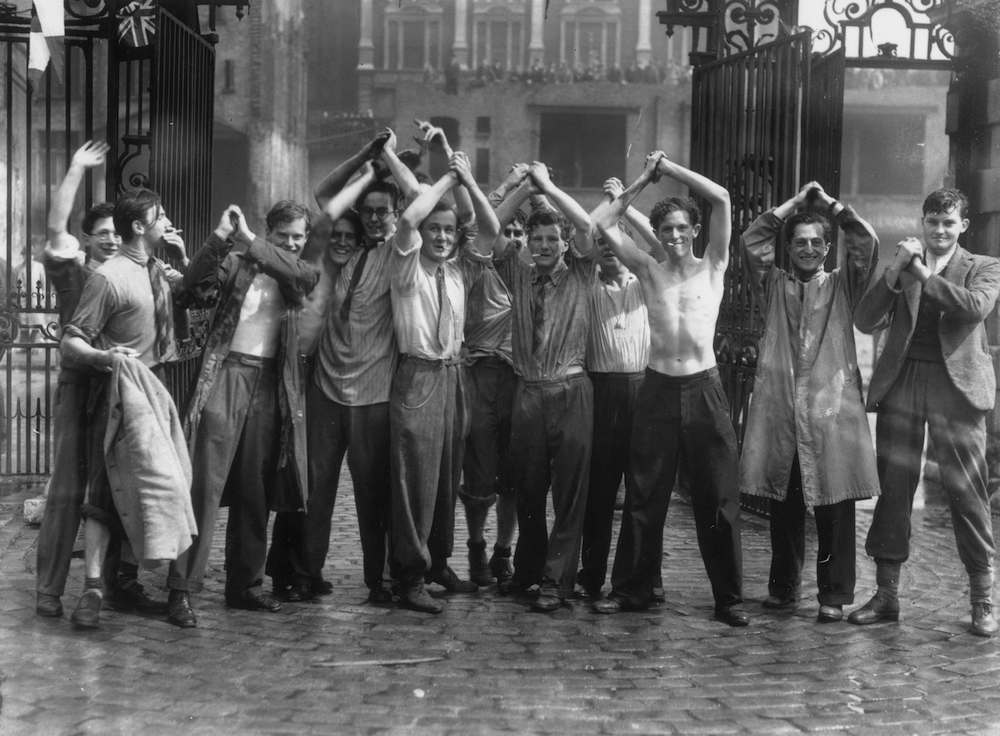 10th May 1945: Medical students at London’s Guy’s Hospital in a celebratory mood as Victory in Europe is declared. (Photo by Keystone/Getty Images) 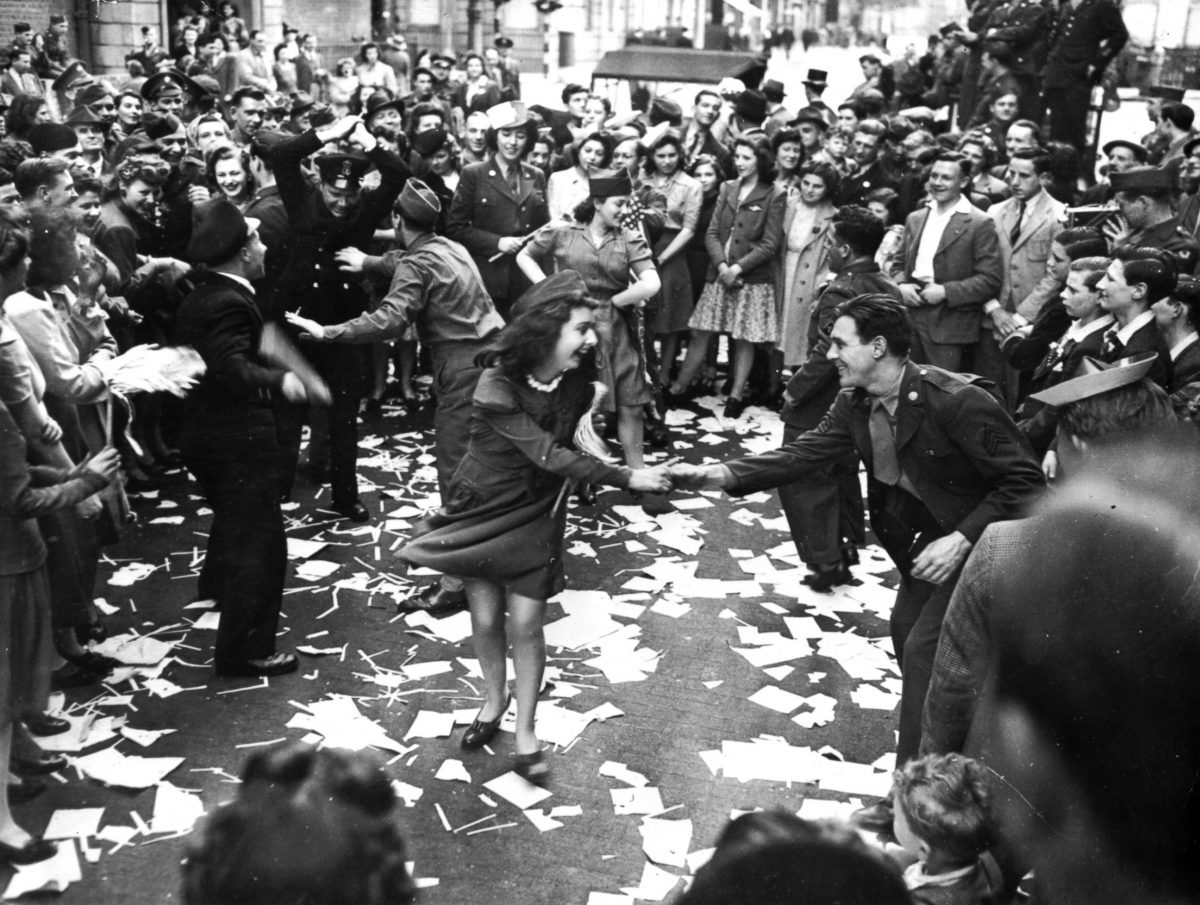 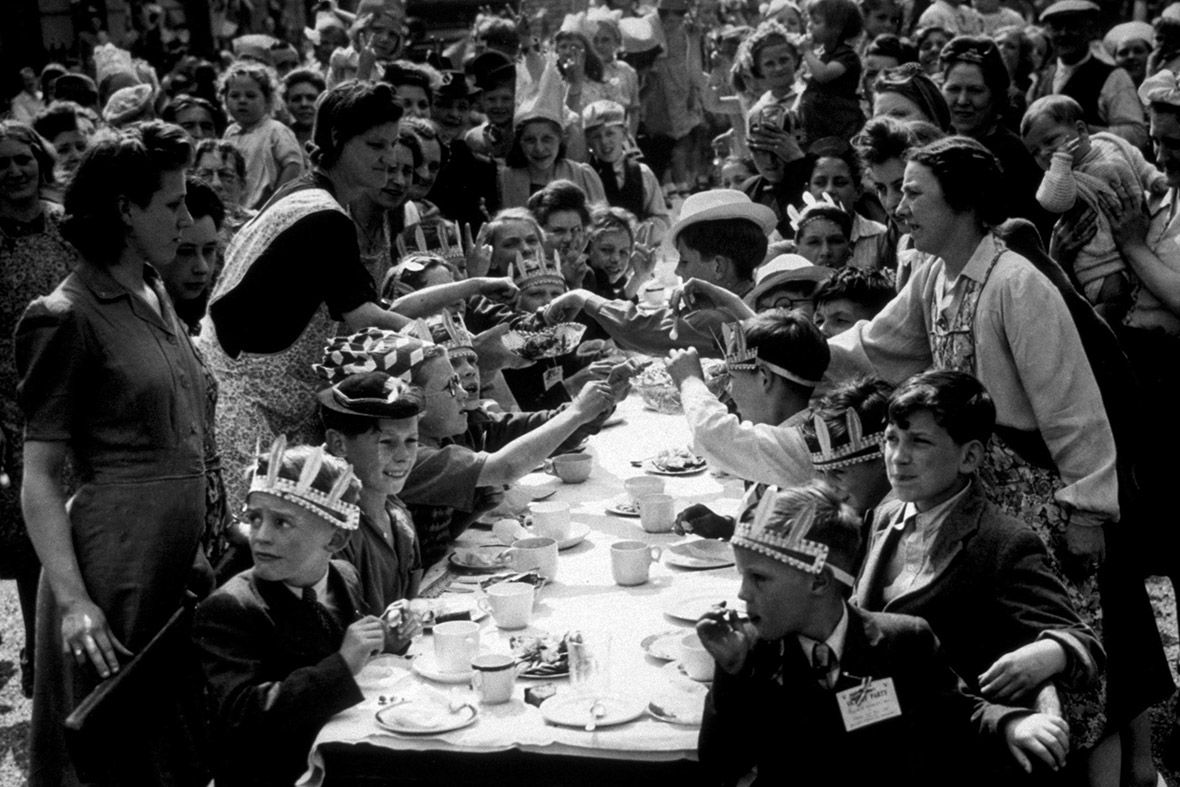 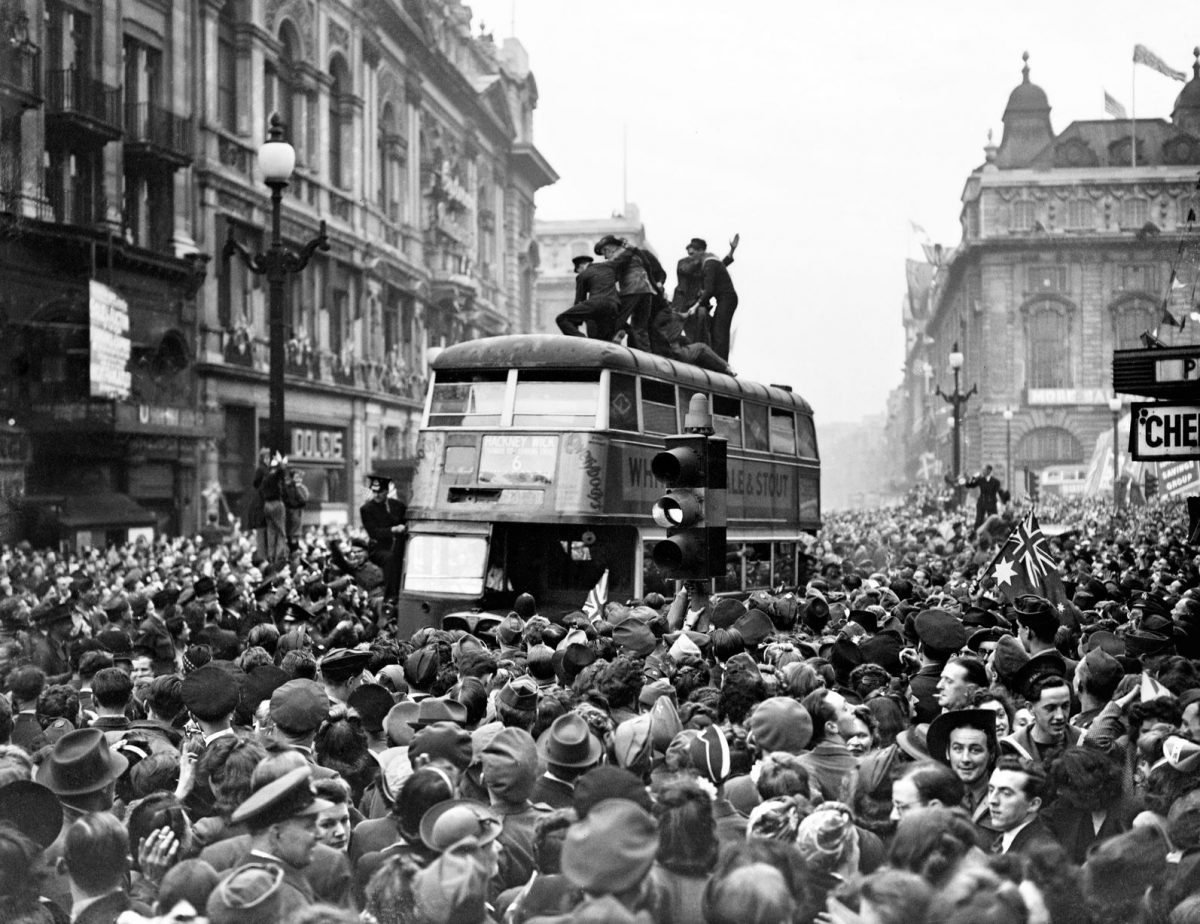 Huge crowds gathered around Piccadilly Circus during the celebrations 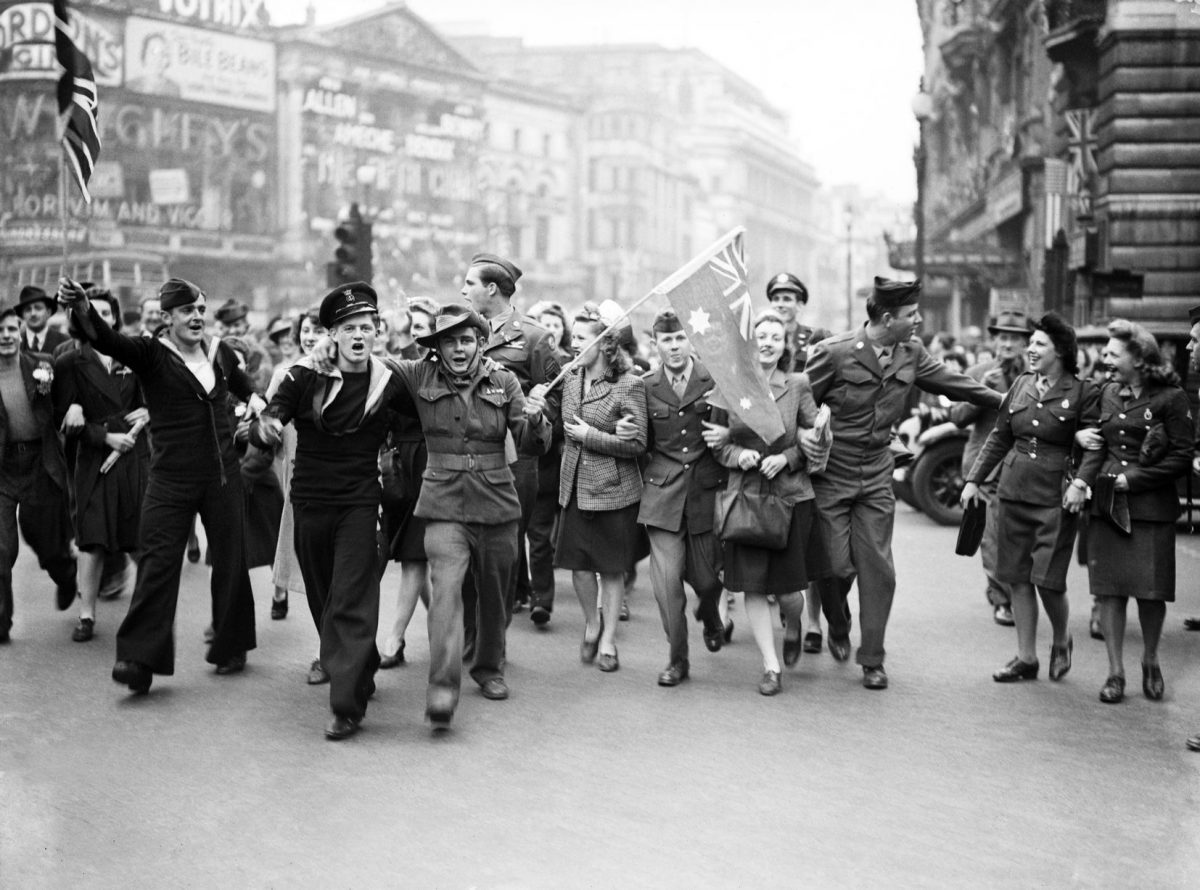 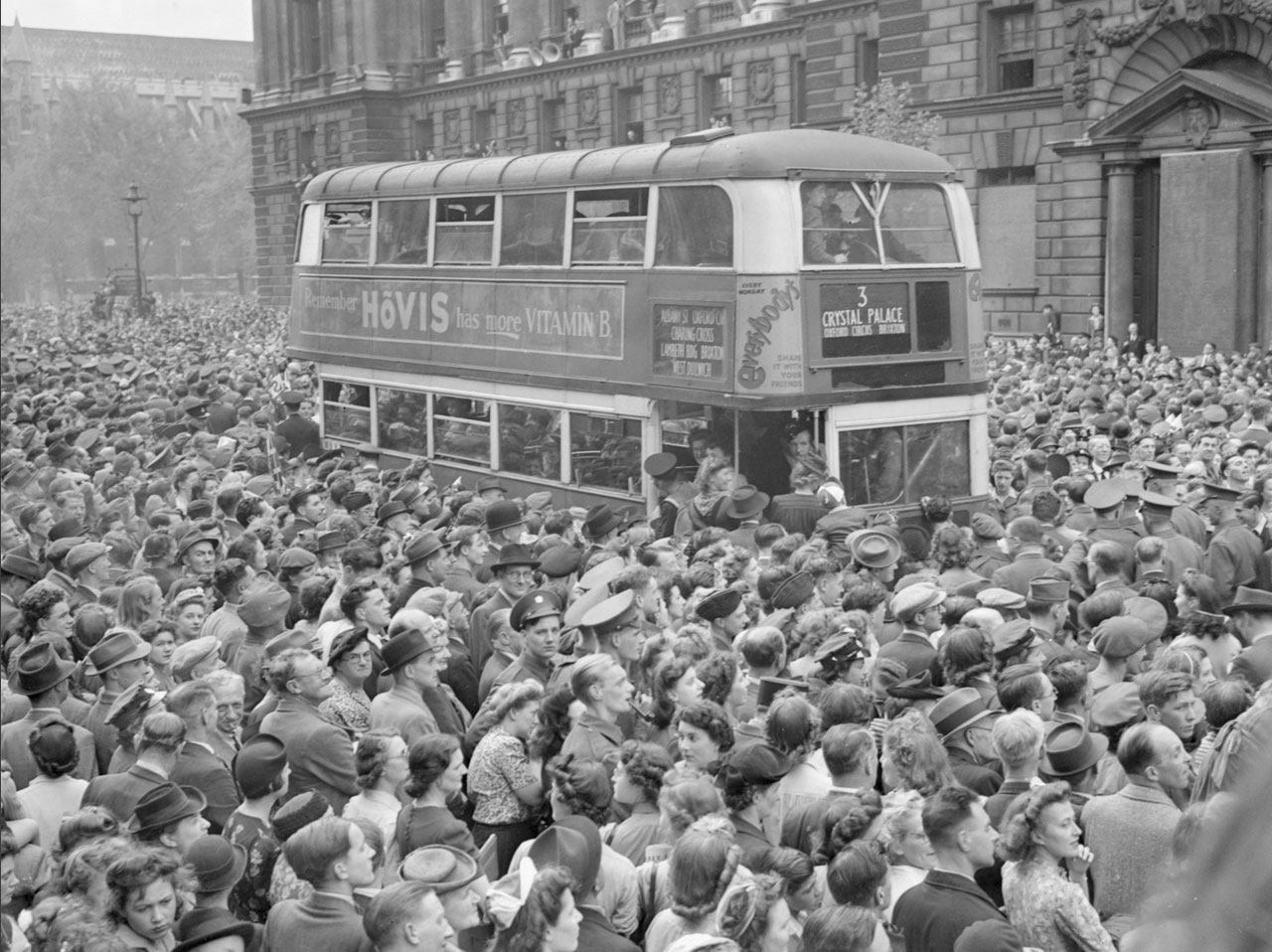 The number 3 struggles to get to south London 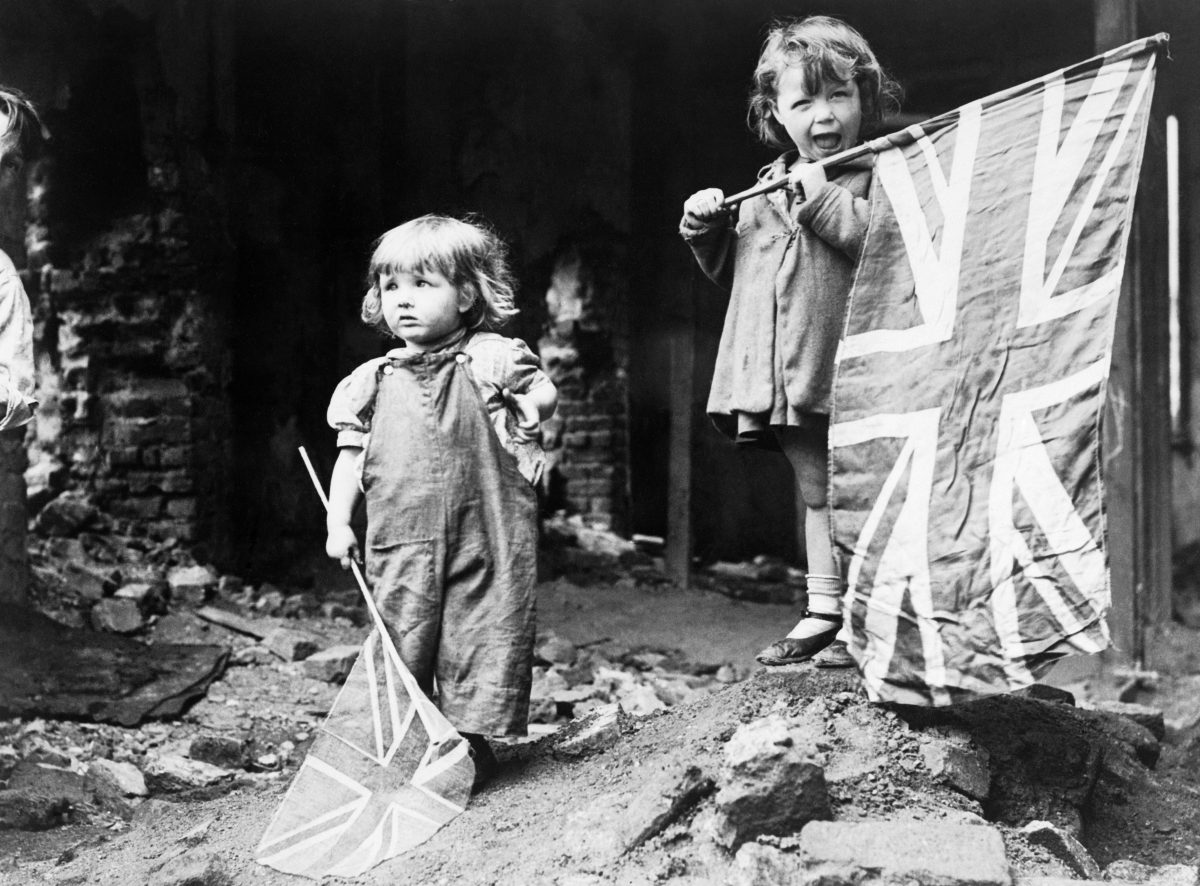 Ve Day in London, 8 May 1945 Two small girls waving their flags in the rubble of Battersea, snapped by an anonymous American photographer. 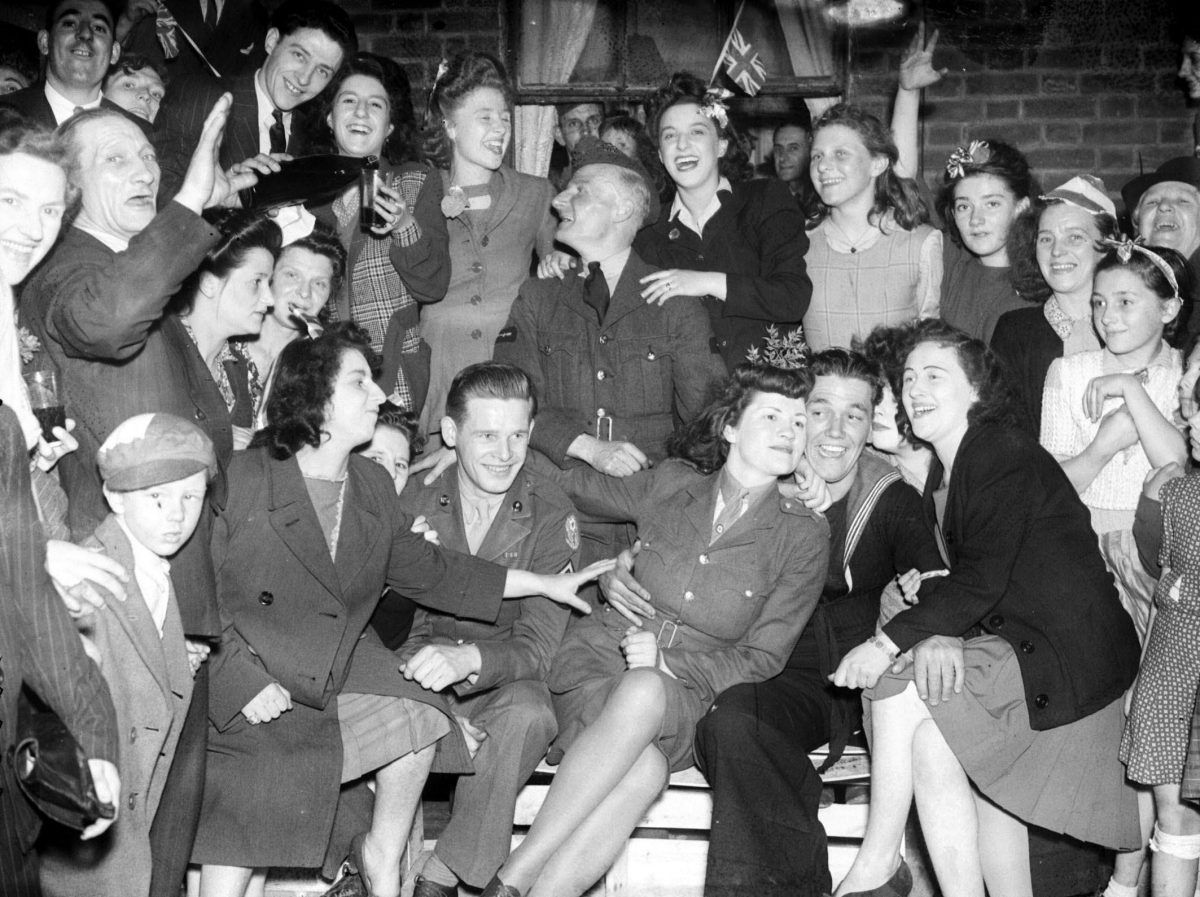 VE Day celebrations in the East End of London 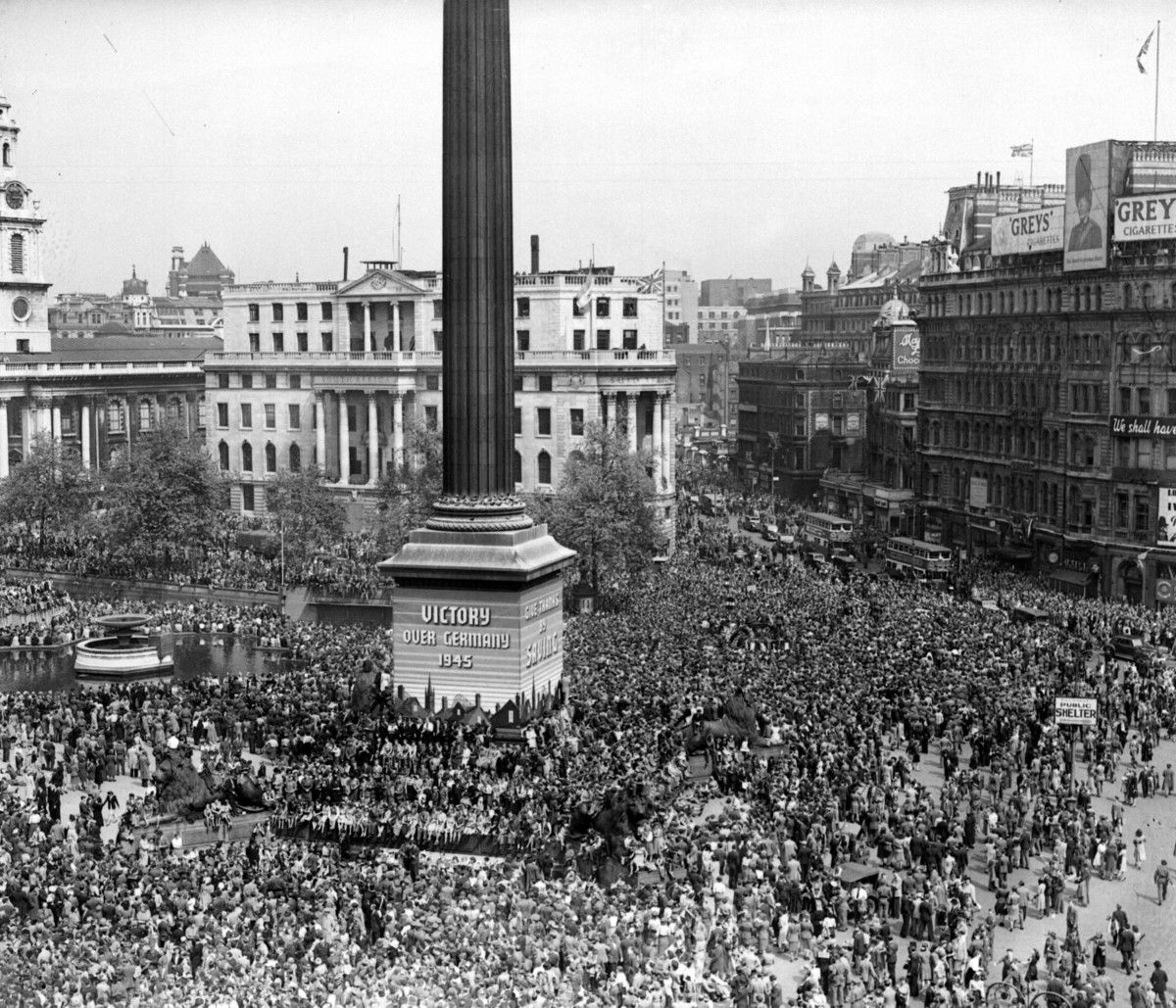 Thousands of people gathered in Trafalgar Square, London, in 1945 to mark VE -Day 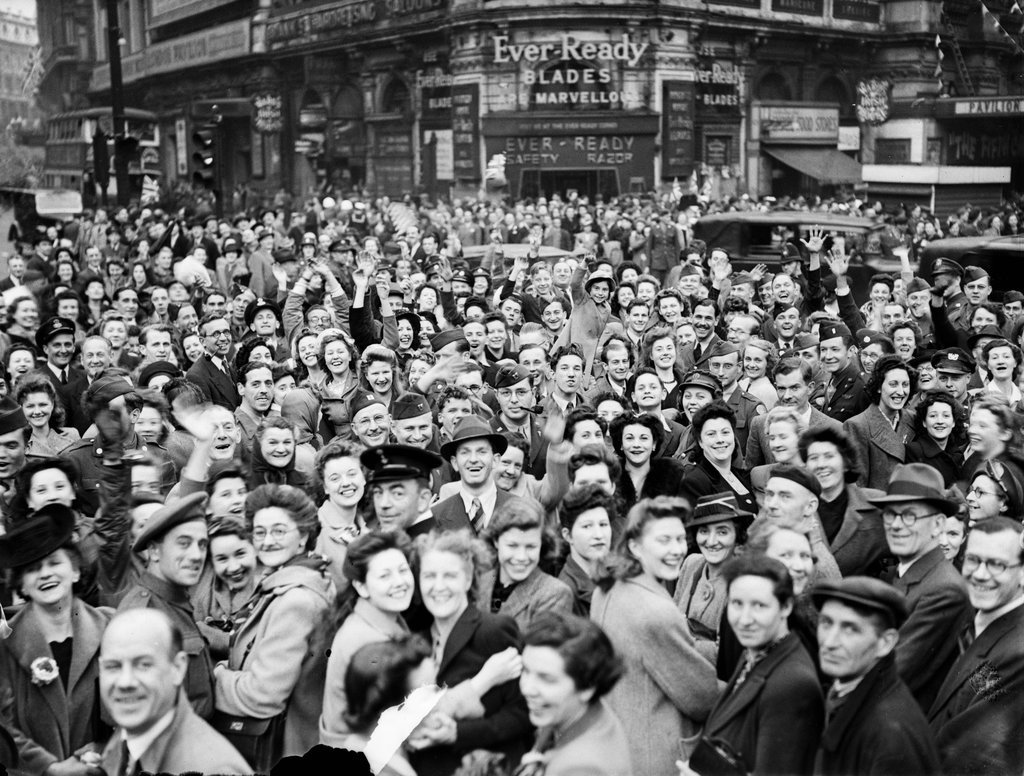 VE Day celebrations in London at the end of the Second World War.
Huge crowds gathered around Piccadilly Circus during the celebrations.
8th May 1945. 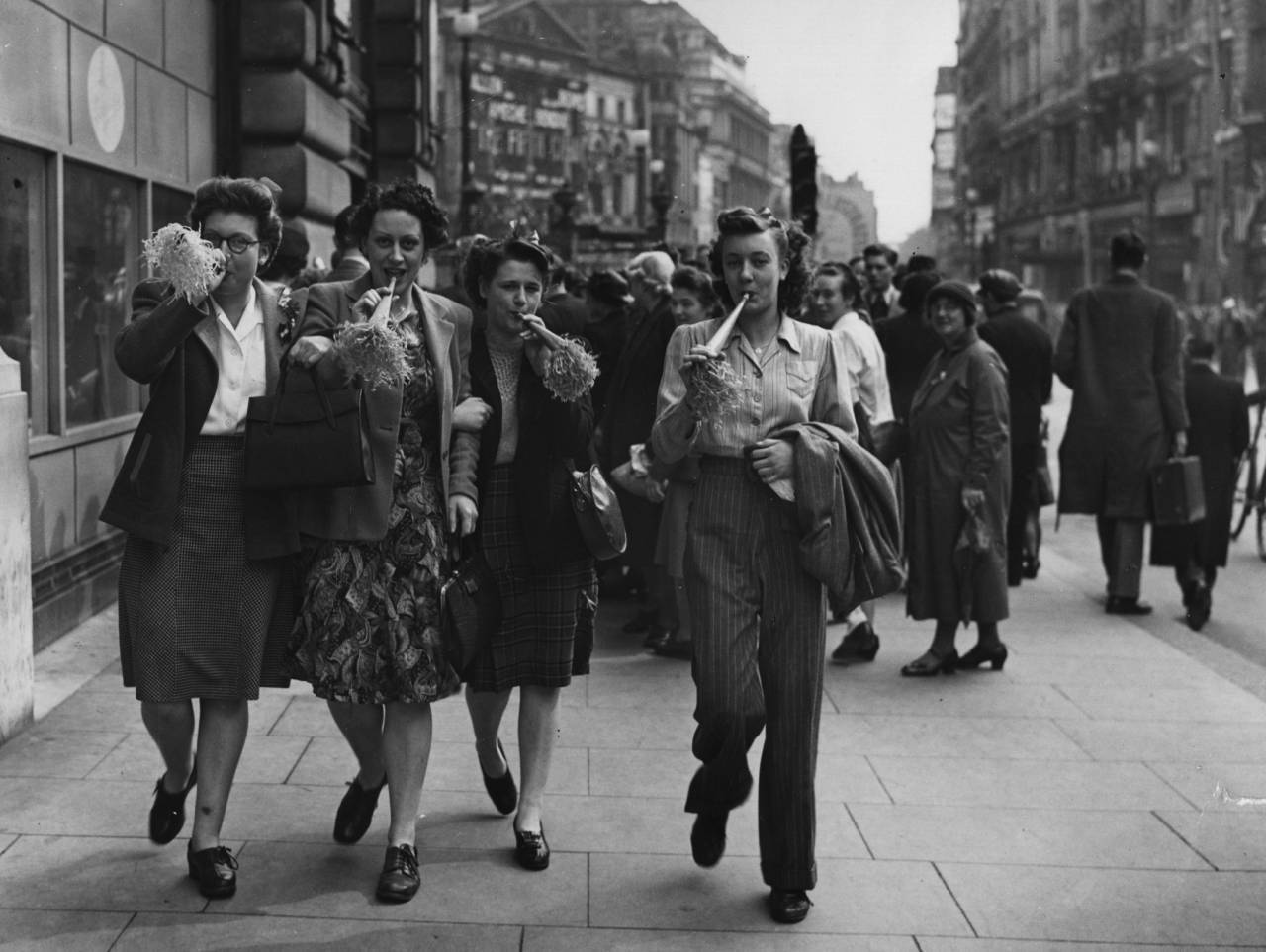 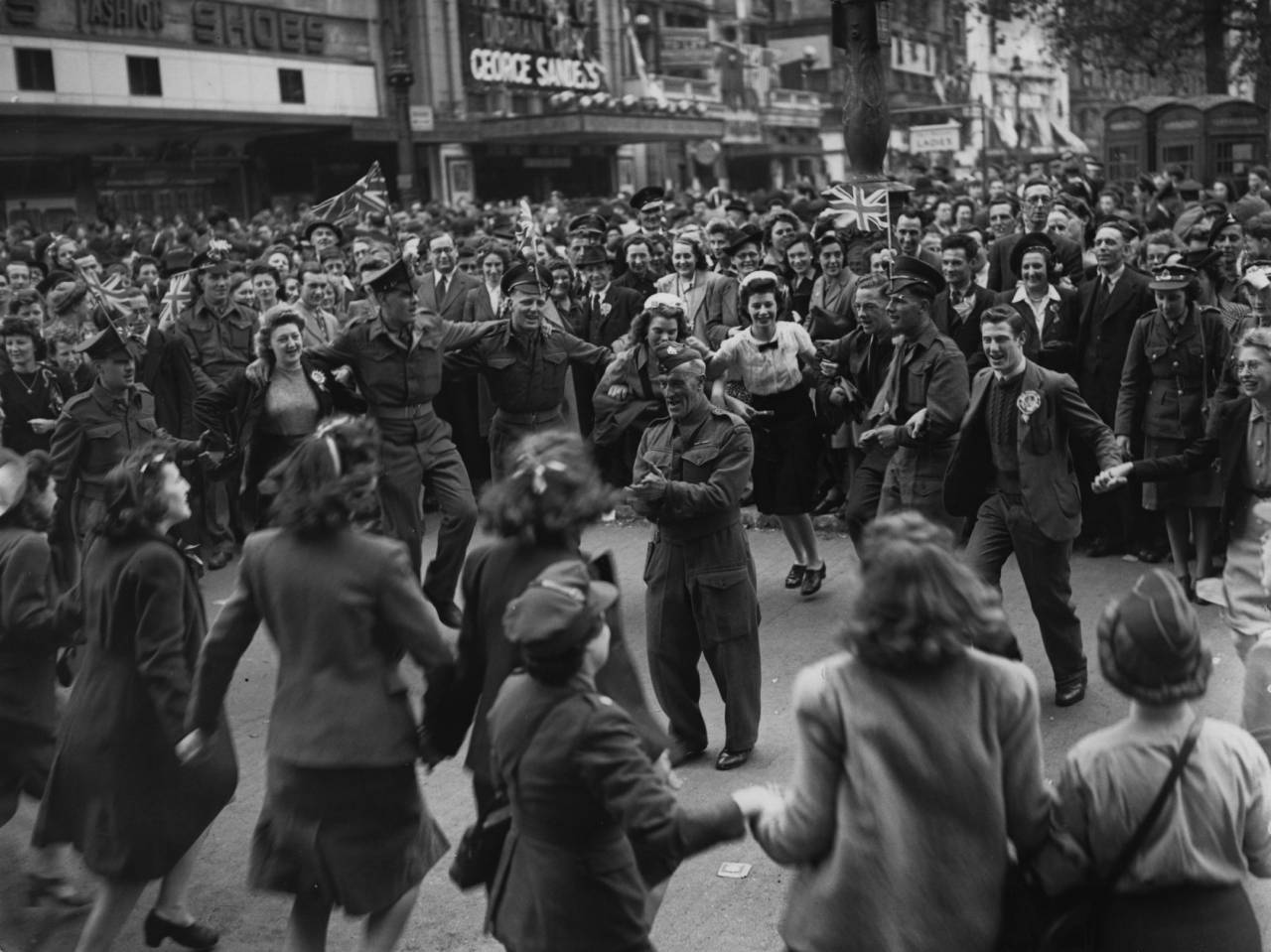 8th May 1945: Canadian troops entertain the crowds in Leicester Square while waiting for the broadcast of the King’s VE Day speech. (Photo by Topical Press Agency/Getty Images) 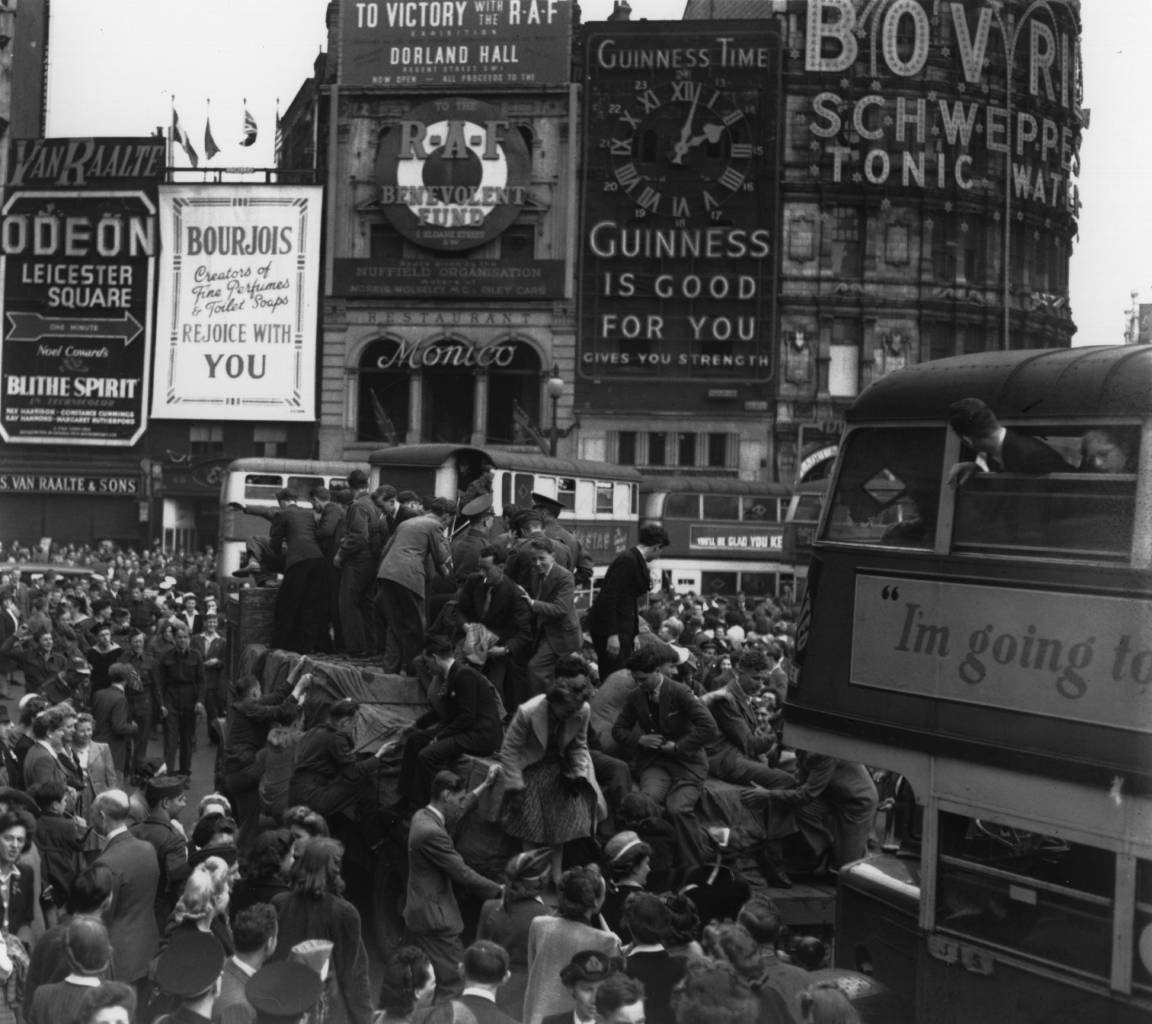 8th May 1945: Crowds clamber on trucks and buses during the VE Day celebrations in Piccadilly Circus. (Photo by Keystone/Getty Images) 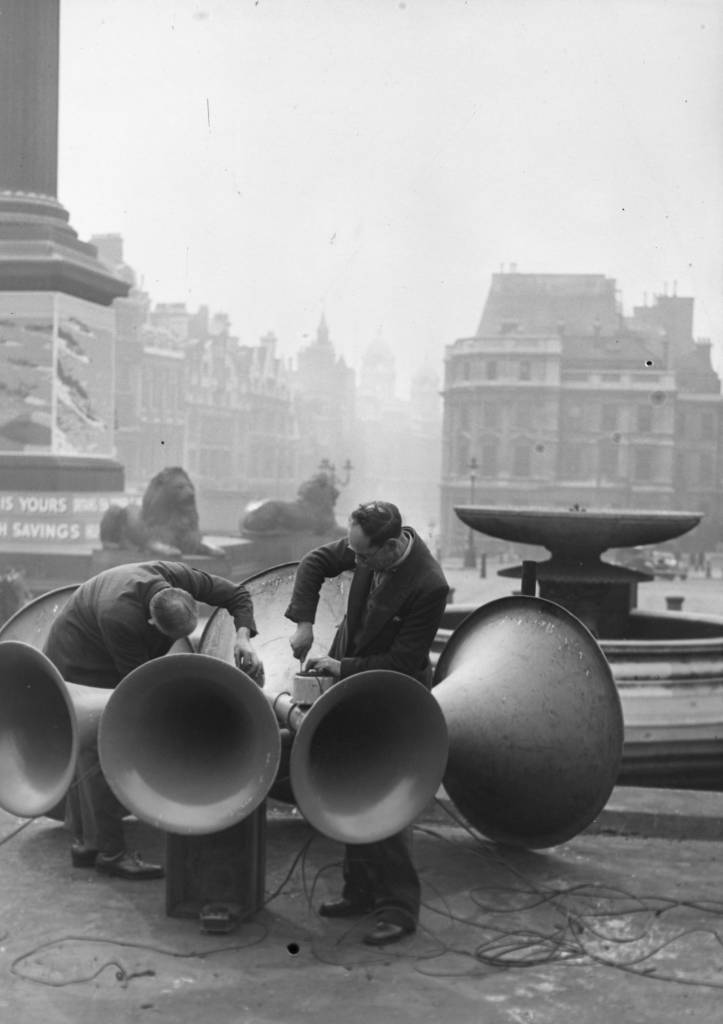 Men fixing the loudspeakers in Trafalgar Square, London, in readiness for the King’s VE-day speech. (Photo by Harry Shepherd/Getty Images) 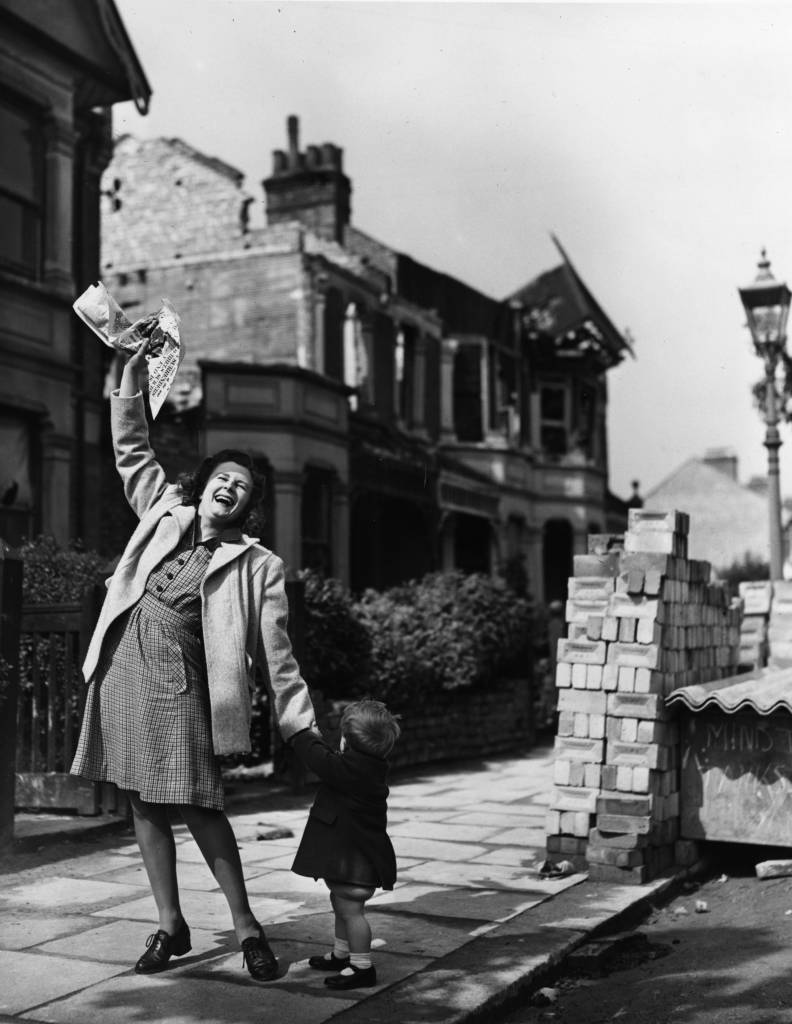 7th May 1945: Mrs Pat Burgess of Palmer’s Green, north London is thrilled to get the news that her husband will soon be home for good from Germany. (Photo by Reg Speller/Fox Photos/Getty Images) 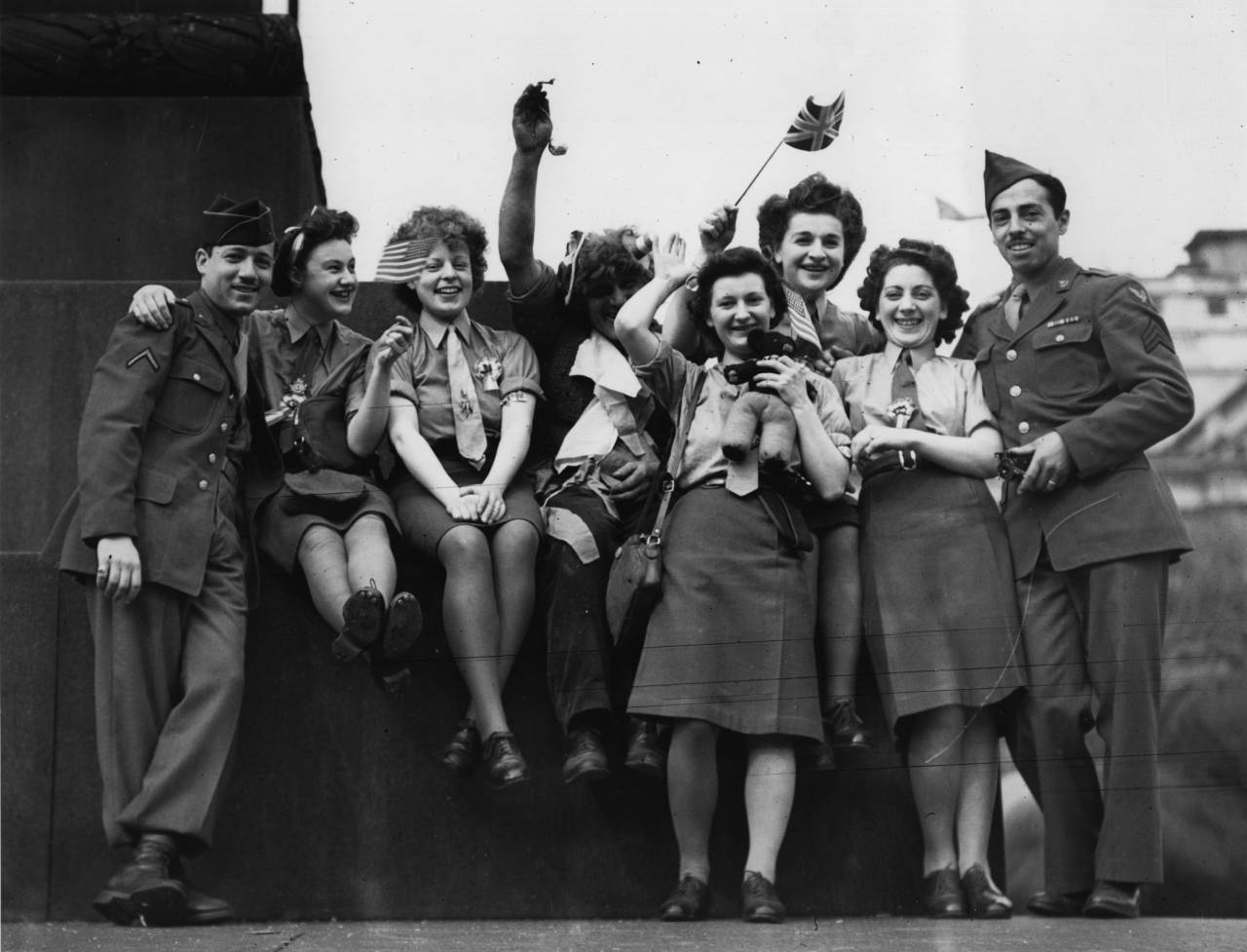 8th May 1945: A group of ATS and American soldiers celebrate VE Day in Trafalgar Square. (Photo by Keystone/Getty Images) 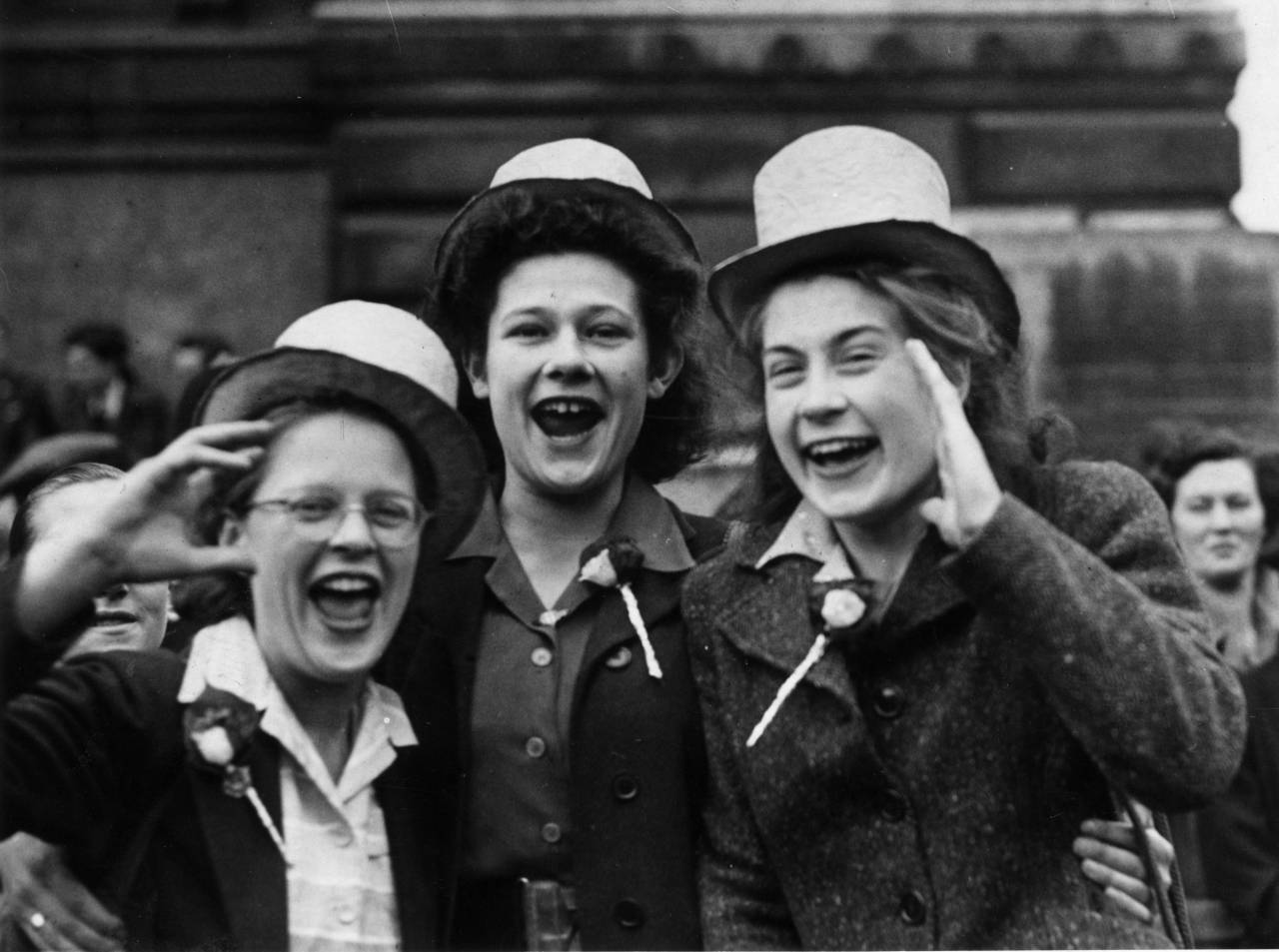 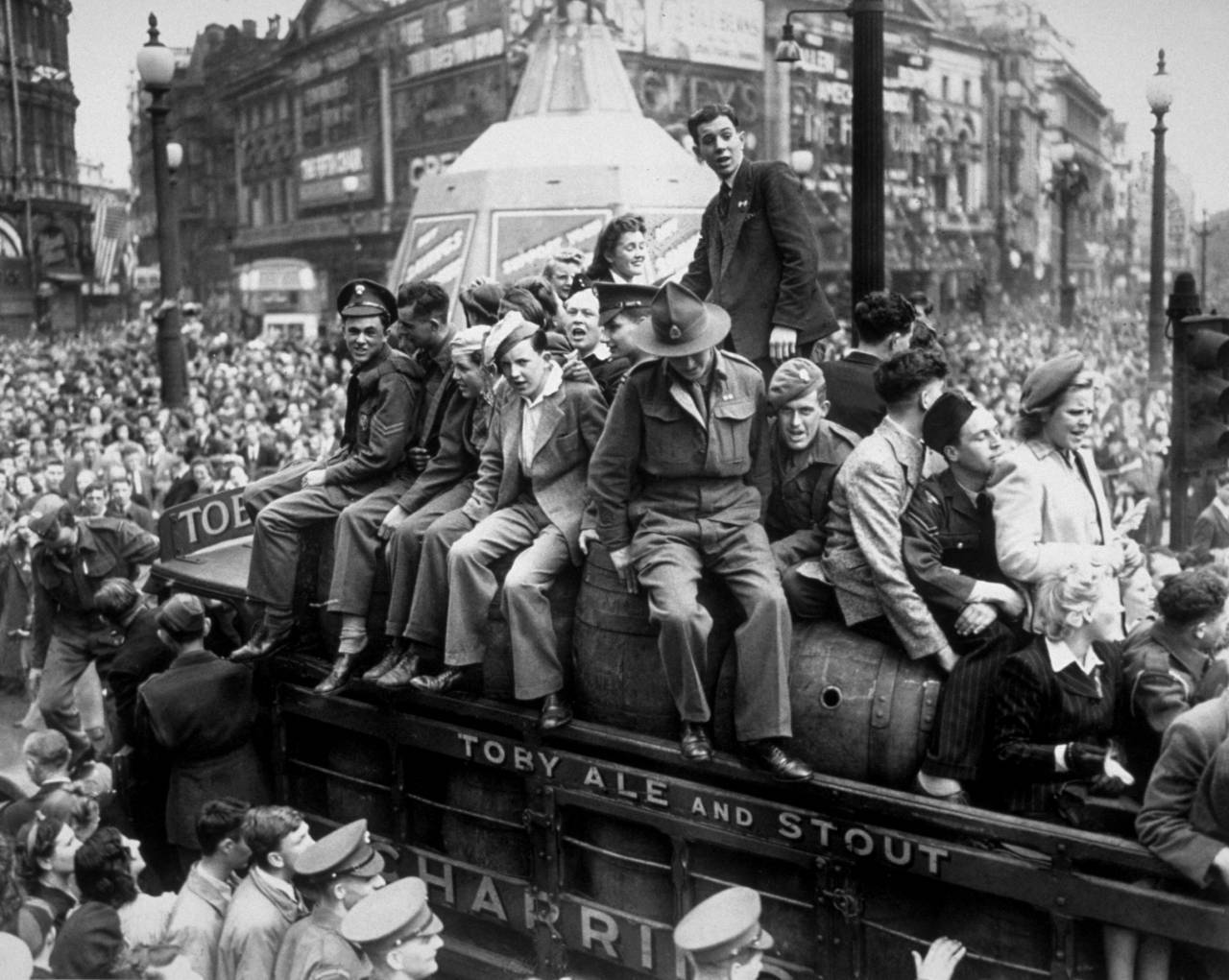 8th May 1945: A van load of beer passing through Piccadilly Circus on VE Day. The statue of Eros, protected during the war by advertising hoardings, can be seen in the background. (Photo by Keystone/Getty Images) 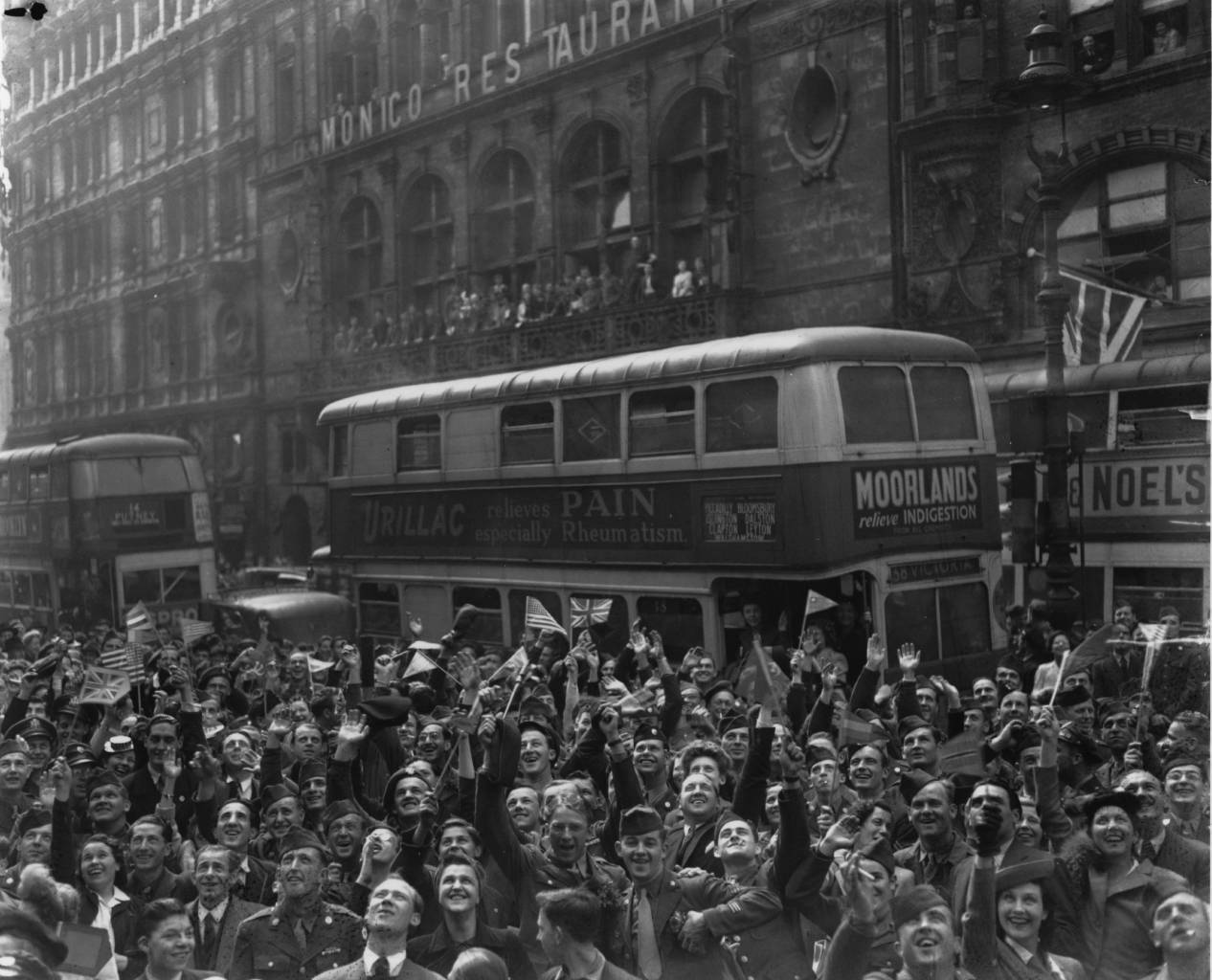