WHEN Mary Quant began to sell short skirts at her London shop Bazaar in 1964, she named them the Mini after her favourite car. The Sixties were in full Swing. All the cool kids wanted one: 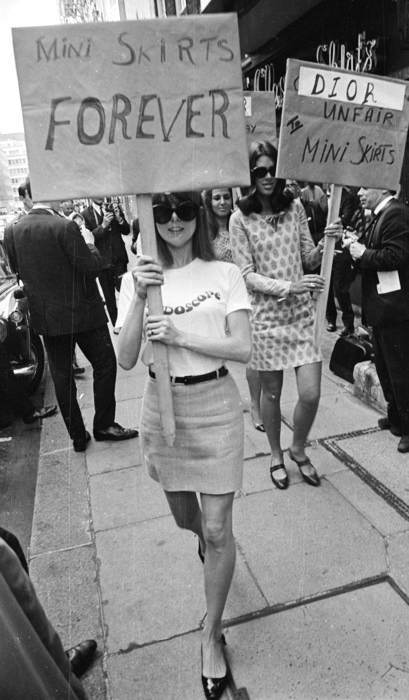 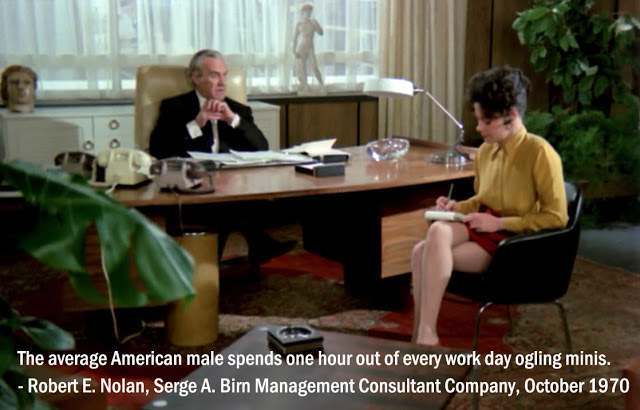 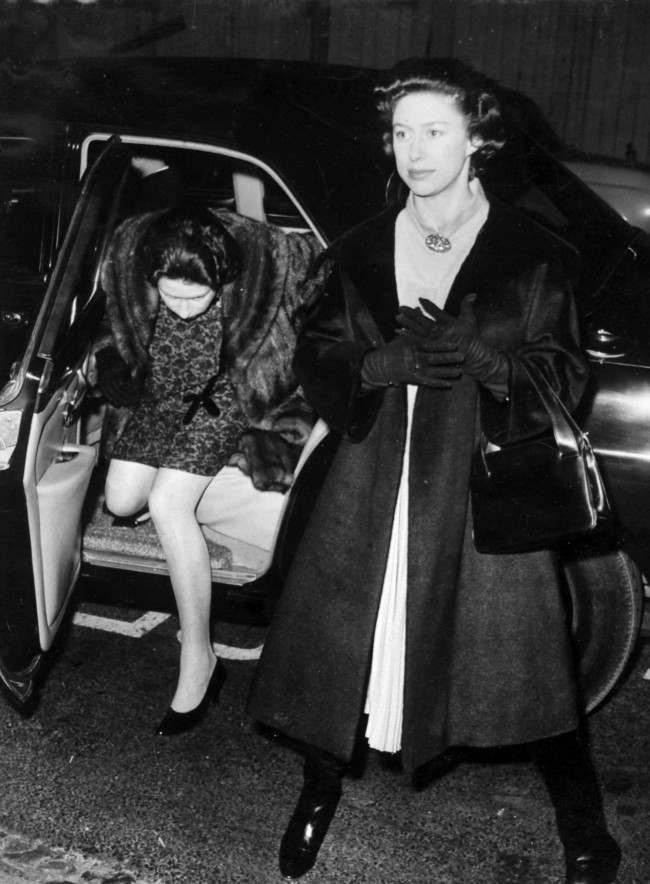 Queen Elizabeth II, left, and her sister Princess Margaret, right, arriving to visit the Queen Mother, after her operation for appendicitis at the King Edward VII Hospital for Officers. Date: 05/02/1964 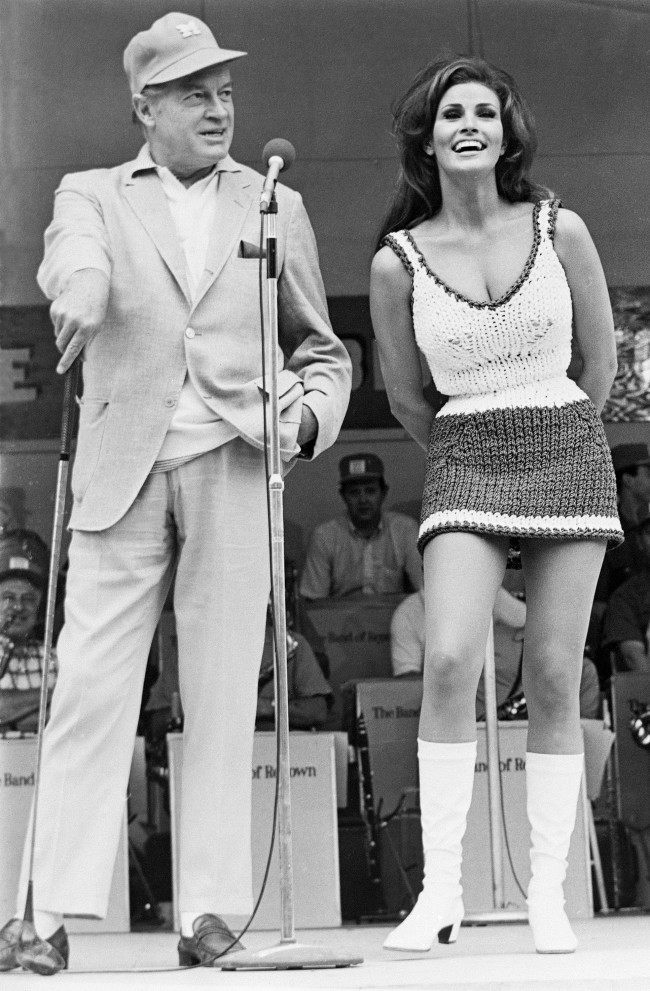 Bob Hope and Raquel Welch share the stage as they entertain the troops in Vietnam during the Vietnam War in 1967. Date: 00/00/1967 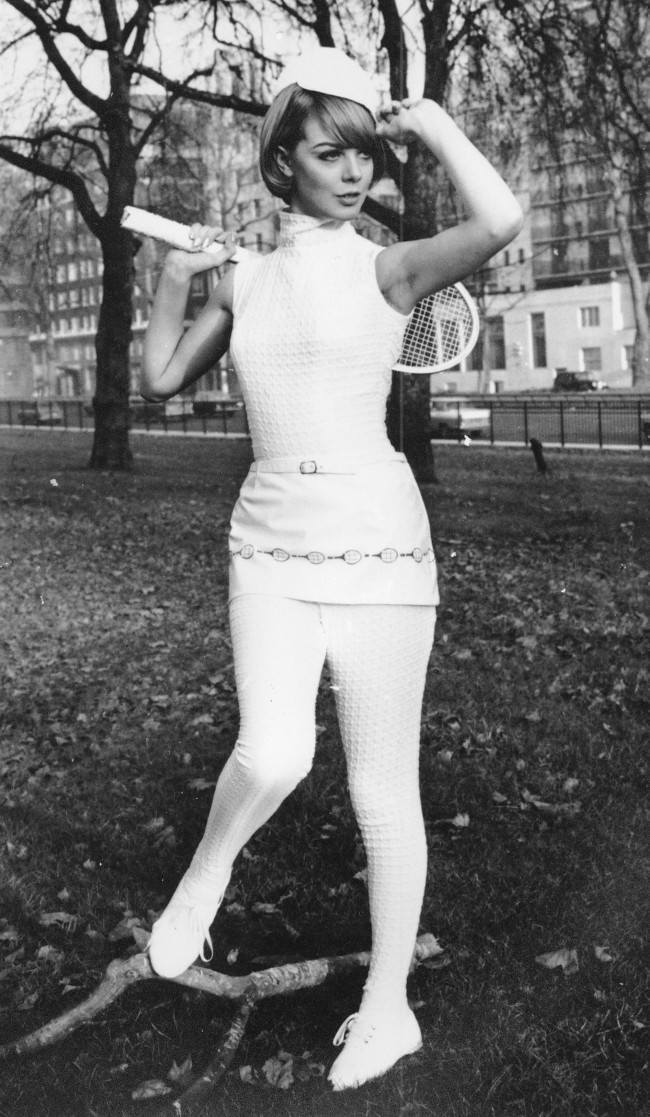 A model poses outdoors in a tennis outfit designed by Teddy Tinling in New York City on Jan. 7, 1966. The cat suit is in dacron souffle with a vinyl mini-skirt decorated with tennis racquet motif. Date: 07/01/1966 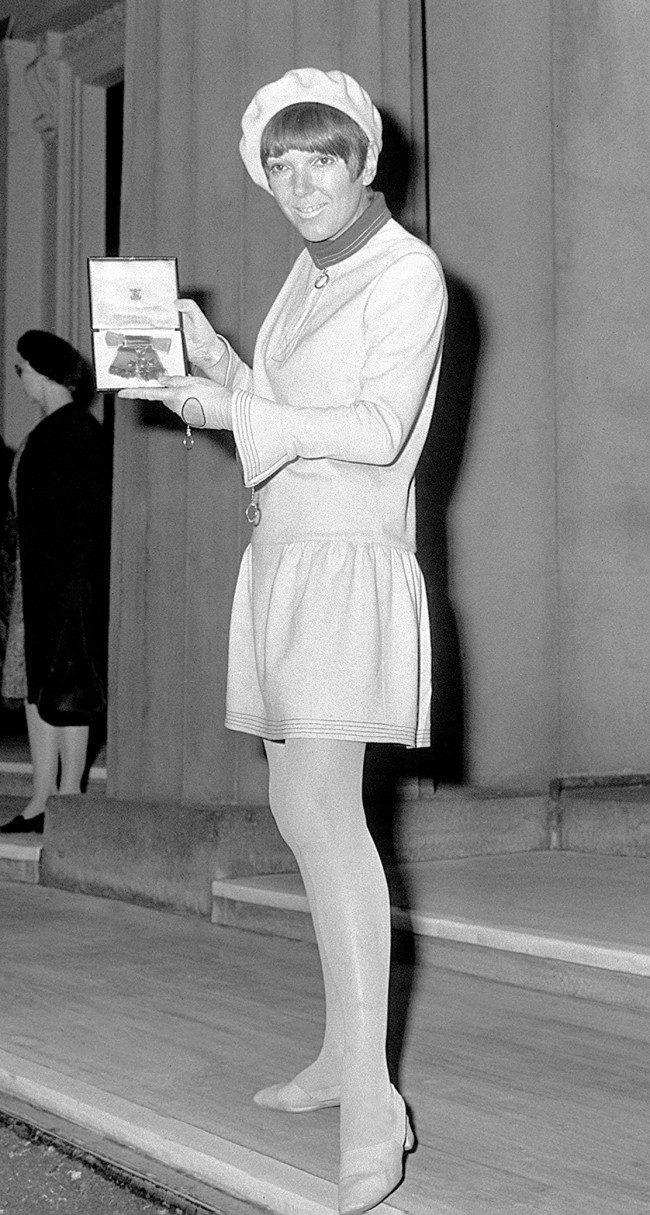 Mini-skirt enthusiast Miss Mary Quant, the girl who put London in the forefront of fashion, said to be reponsible for 2 million worth of exports everty year, dressed in a miniskirt style as she left Buckingham Palace after receiving an OBE at her investiture. Date: 15/11/1966 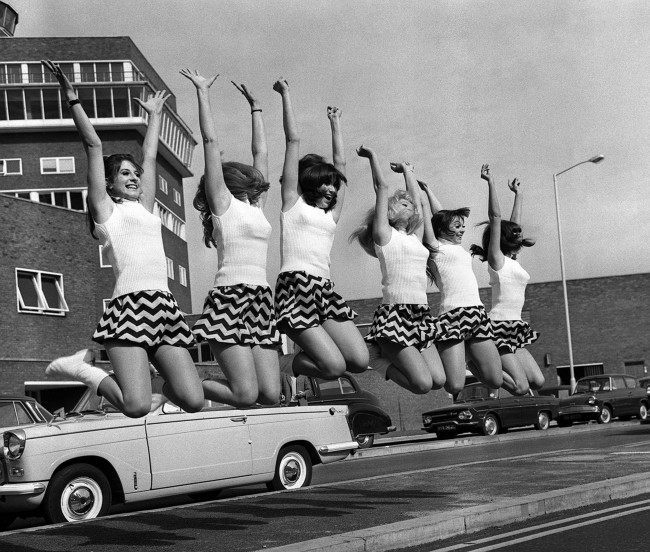 Television’s ‘Beat Girls’ dance troupe – Dee-Dee Wilde, Lorelly Harris, Diana South, Babs Lord, Penny Fergusson and Felicity Colby – “take off” at London Airport, where they were leaving for Venice with the Luvvers pop group. They are scheduled to perform at a lavish party planned by Universal Pictures after the premiere of ‘Farenheit 451’, the official British entry at the Venice Film Festival Wearing dazzle-striped mini-skirts, white sweaters and white boots. Date: 07/09/1966 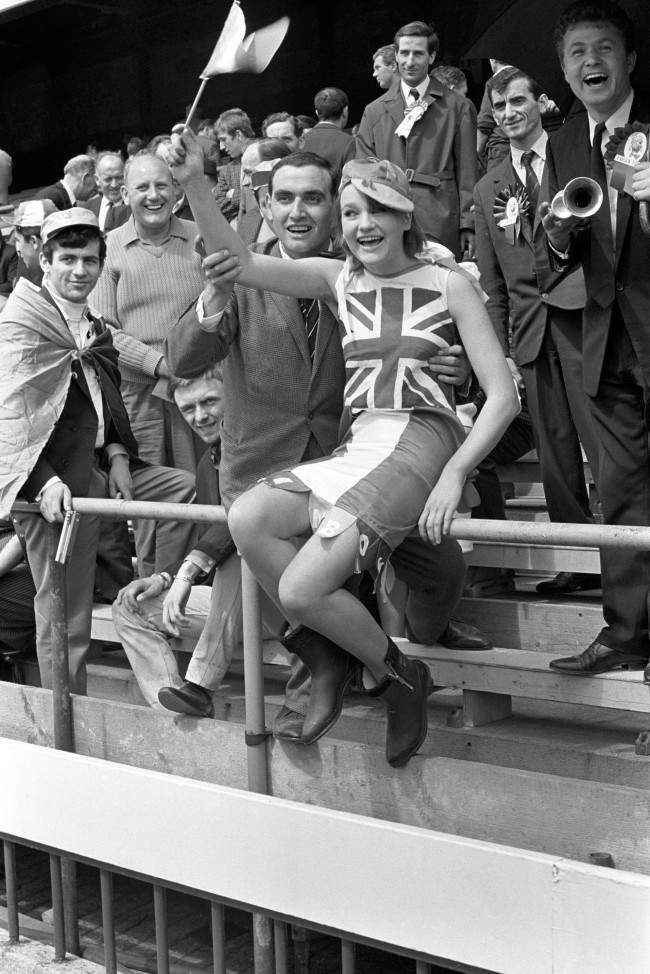 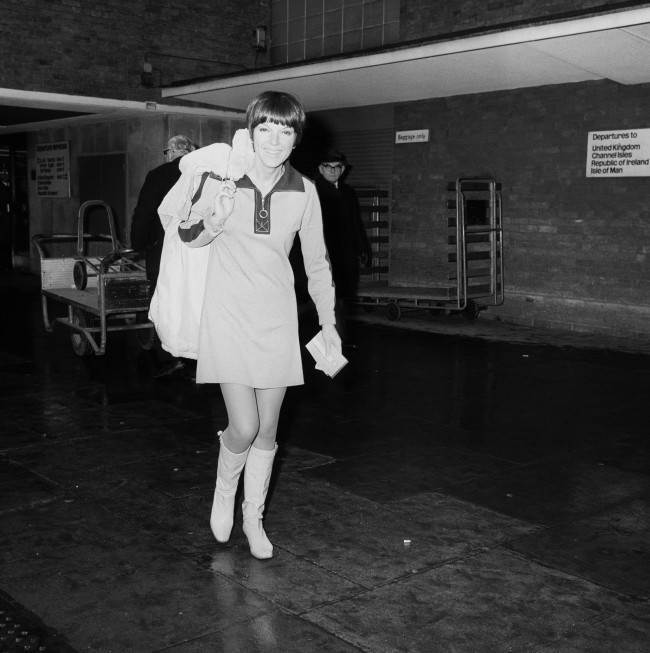 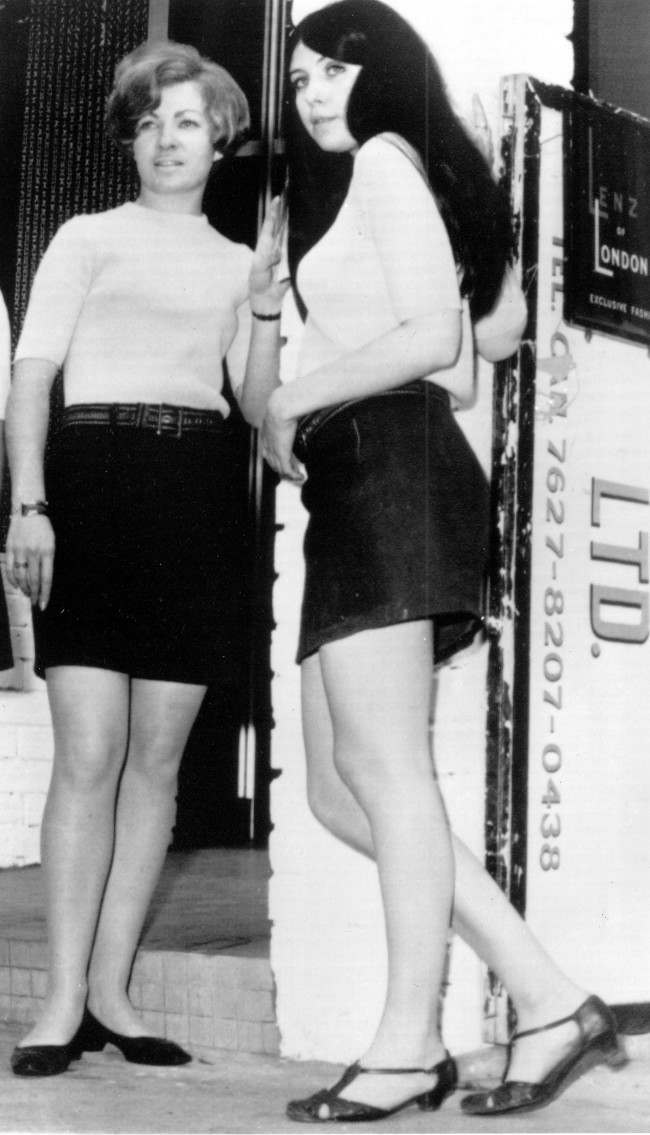 Helen Turner and Linda Bennion, waitresses at Nero, the Mad Ox, pose outside the new restaurant in London, England on Aug. 16, 1966. Bennion wears her mini-skirt with a hemline 10 inches above her knees. Date: 16/08/1966 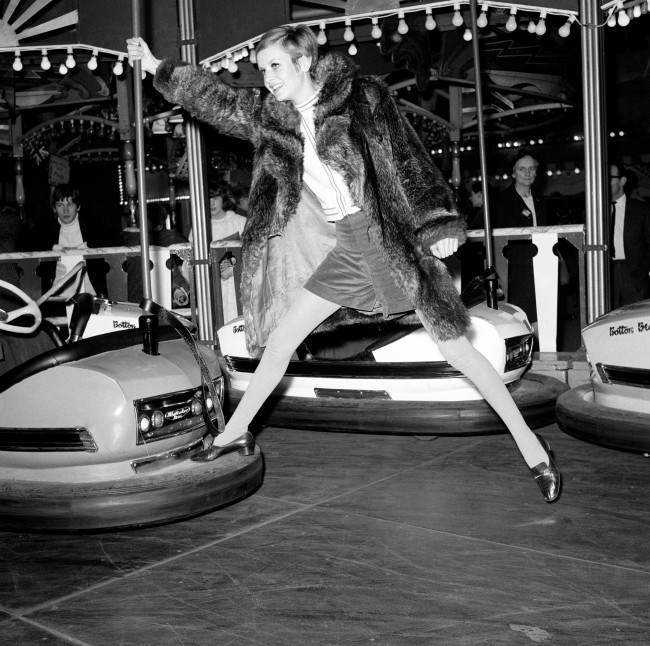 Model Twiggy rides the dodgems in an unorthodox fashion at the Olympia car show.Date: 05/01/1967 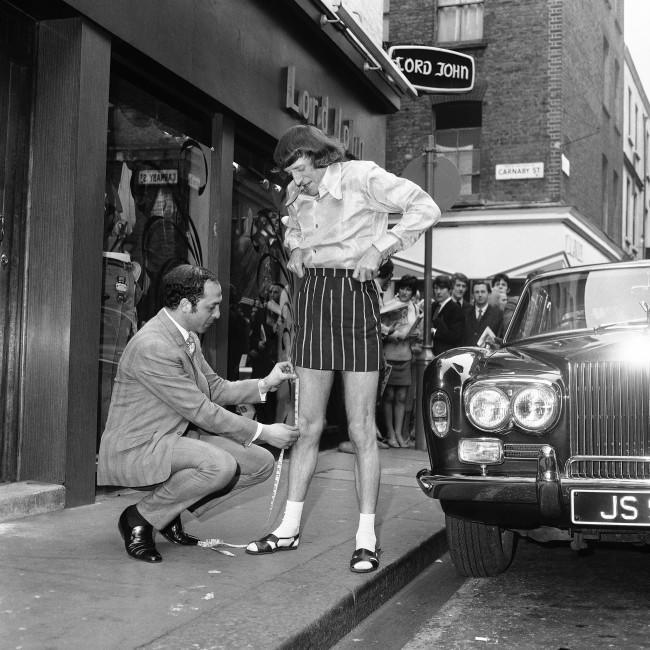 Jimmy Saville, the British disc jockey, watches as Warren Gold, Lord John of Carnaby Street measures the height of his manÂs mini-skirt in Carnaby Street, London, England on April 28, 1967. The mini-skirt, by Lord John, is blue with black chalk stripes and measures 9Âœ inches above the knee. Date: 28/04/1967 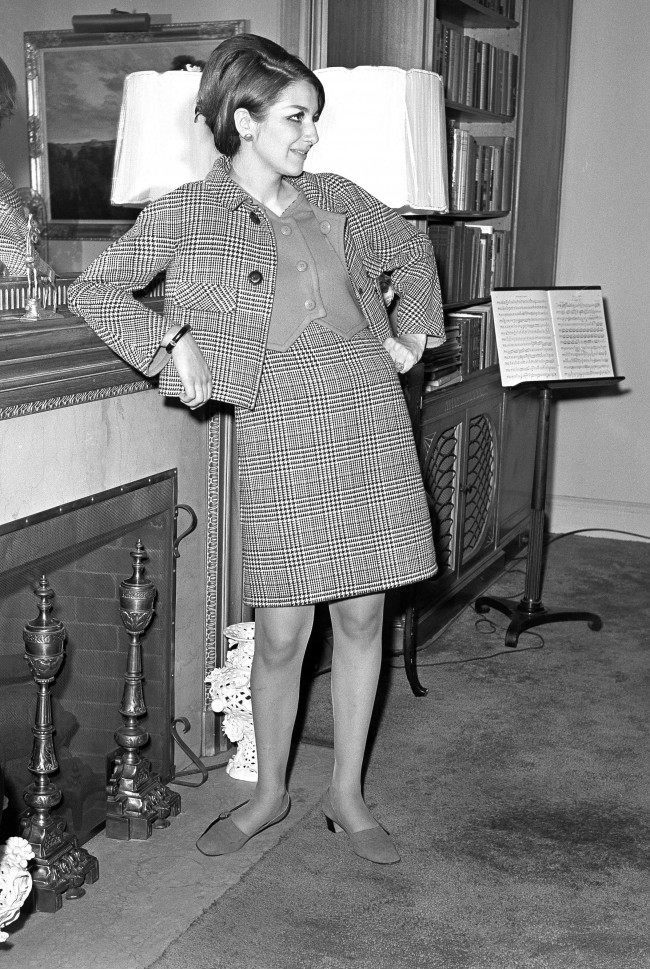 The mini weskit is a pert feature of this reversible three-piece suit, shown Aug. 23, 1967. In black and white wool glen plaid with a red wool vest, the suit reverses to all red wool. The jacket is boxy. Without the jacket, skirt and weskit form a sleeveless two-piece dress.  Date: 23/08/1967 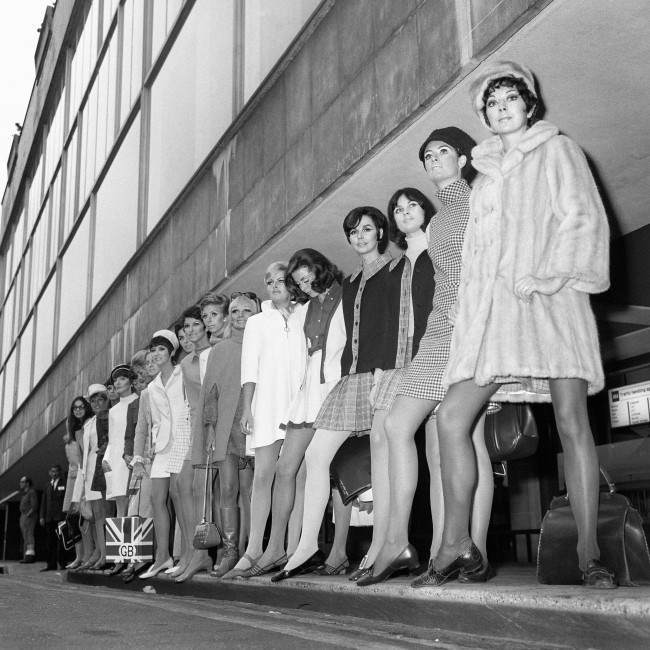 Twenty mini-skirted British models at Heathrow Airport, London, prior to their departure to Moscow. They are members of the British Clothing Export Council party, who are taking part in the Soviet Union’s International Festival of Fashion to be held at the International Palace of Sports in the V.I. Lenin Stadium. Date: 01/09/1967 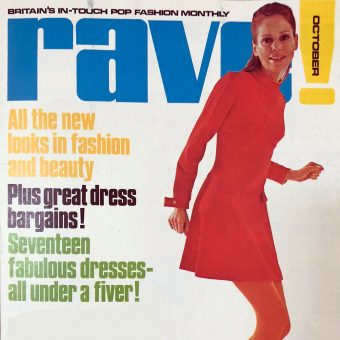 Ads and Shoots from the Rave Magazine Fashion Supplement, October 1967 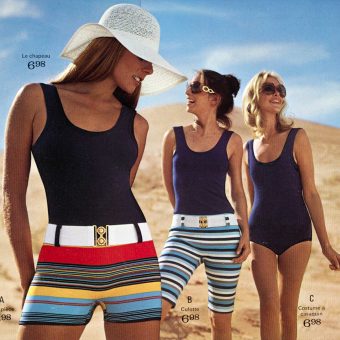 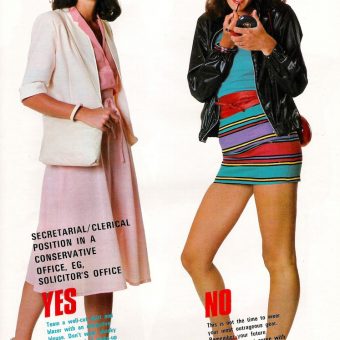 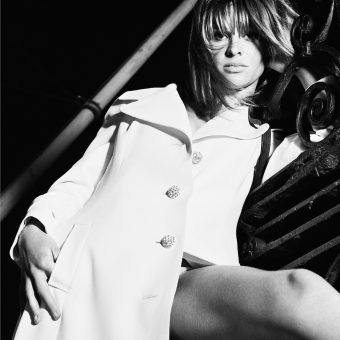 Birds Of Britain: The Most Fanciable Women In Swinging London