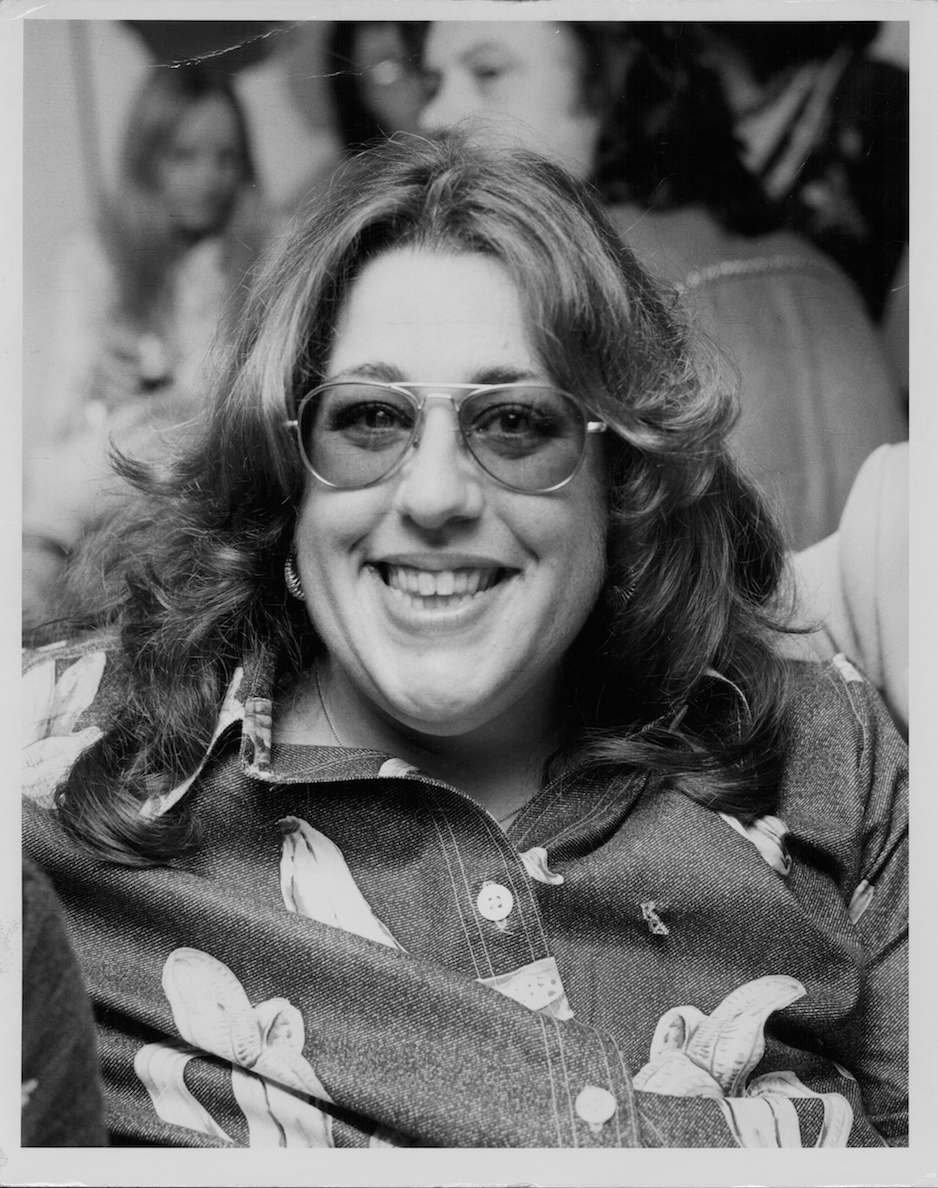 Mama Cass Elliot famously died choking on a ham sandwich, everybody knows that. Except she didn’t. The myth started because the first doctor who examined her after her death, a Dr Anthony Greenburgh, told the press the next day:

From what I saw when I got to the flat she appeared to have been eating a ham sandwich and drinking Coca-Cola while lying down – a very dangerous thing to do…she seemed to have choked on a ham sandwich.

Dr Greenbugh overlooked the rather important fact that the sandwich was by the side of her bed and lay untouched but by then it was too late. The press reported his initial comments and the doctor unwittingly gave rise to the sandwich myth. Elliot actually died from the far more medically exact: “fatty myocardial degeneration due to obesity” in other words natural causes due to being overweight – she was prone to going on crash diets which in the end fatally weakened her heart. The sandwich story was a famous case of when “the legend becomes fact, print the legend”. 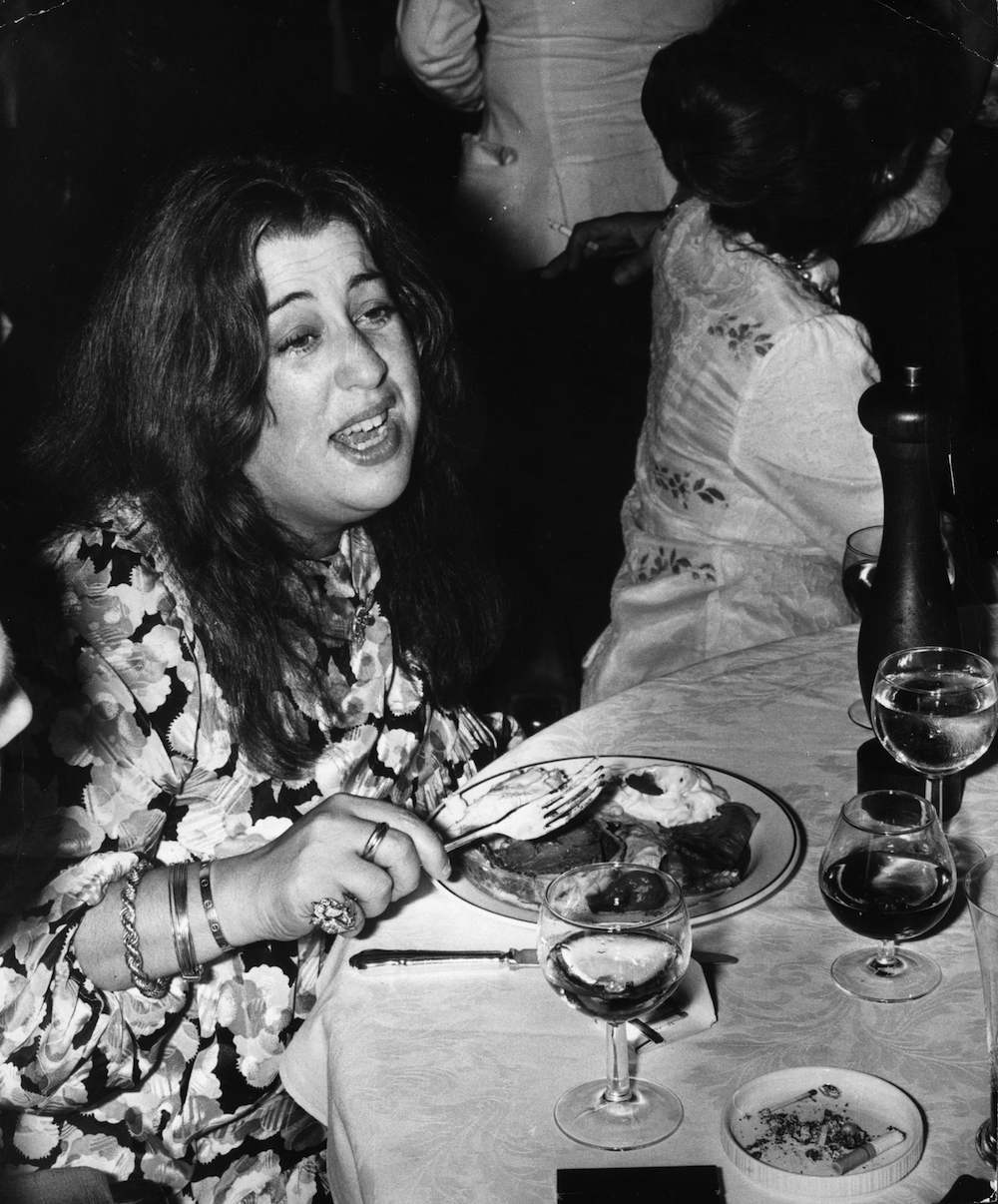 Mama Cass Elliot  formerly of the The Mamas And The Papas eats at a party at Crockford’s casino in London, not long before she died. (Photo by Joe Bangay/Evening Standard/Getty Images) 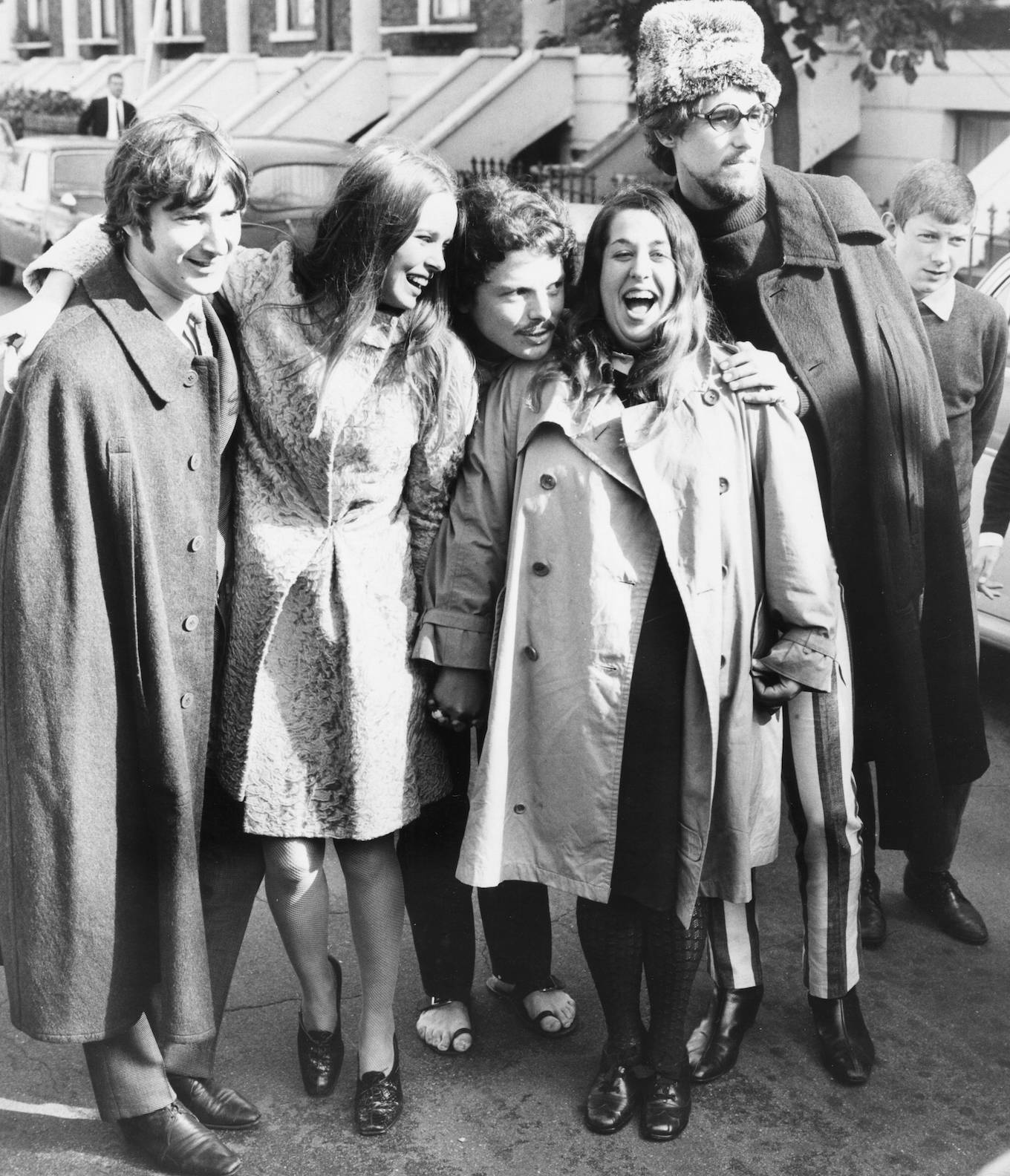 On 29 July 1974 Cass Elliot had just finished a run of shows at the London Palladium and was pleased with the several standing ovations she had received. Before she went to bed she called her former band member Michelle Phillips who later recounted:

She had had a little champagne, and was crying. She felt she had finally made the transition from Mama Cass.

Cass Elliot was just 33 when she died.
 
The small one-bedroom Mayfair flat at 12 Curzon Place (now 1 Curzon Square after some rather revolting 1980s redevelopment in the area) in which Cass Elliot died belonged to her friend the singer Harry Nilsson. He had bought it impressed with the location, it was near Apple Records (he was a good friend of The Beatles) but more importantly near the Playboy Club and Tramps disco. 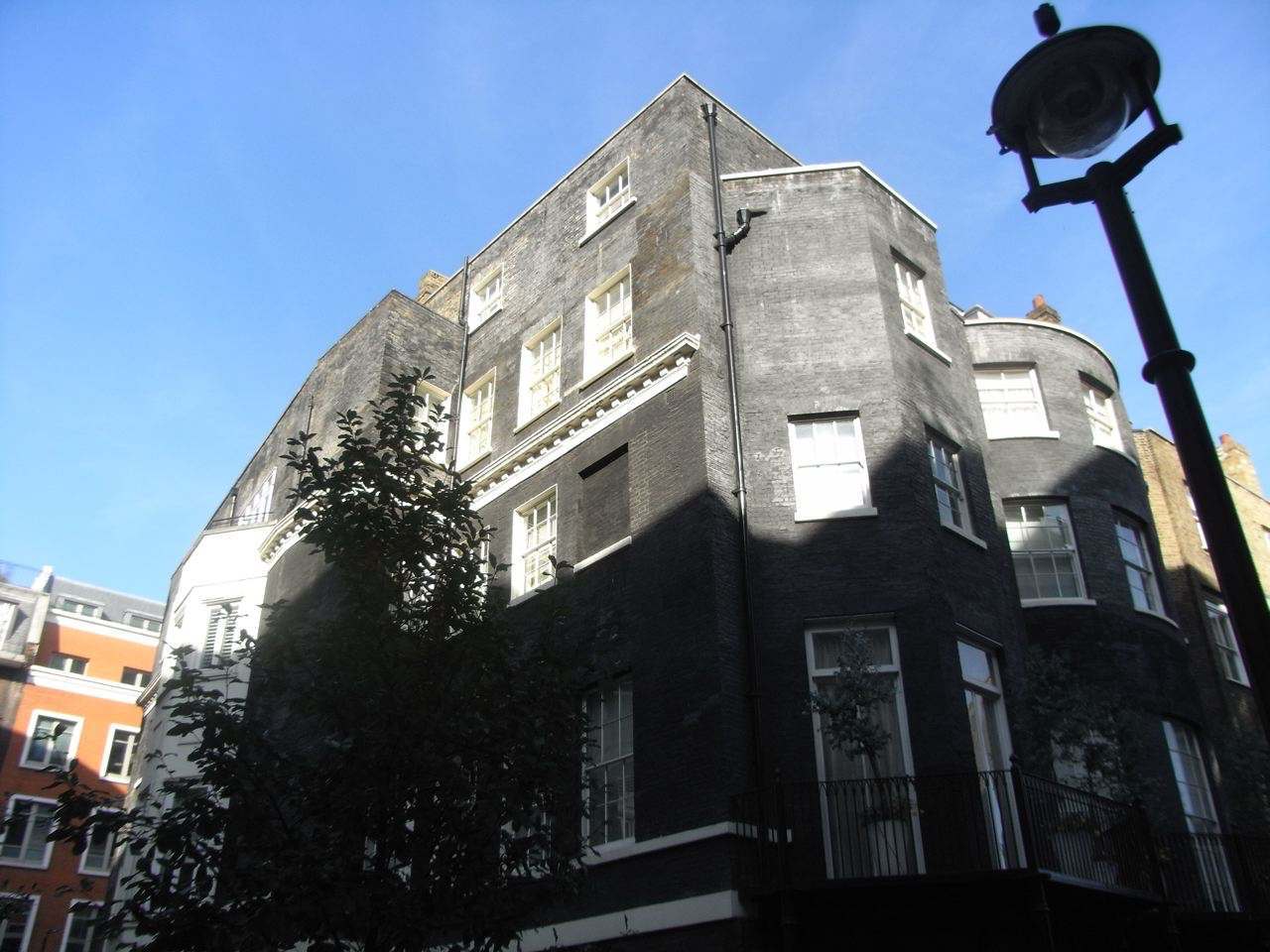 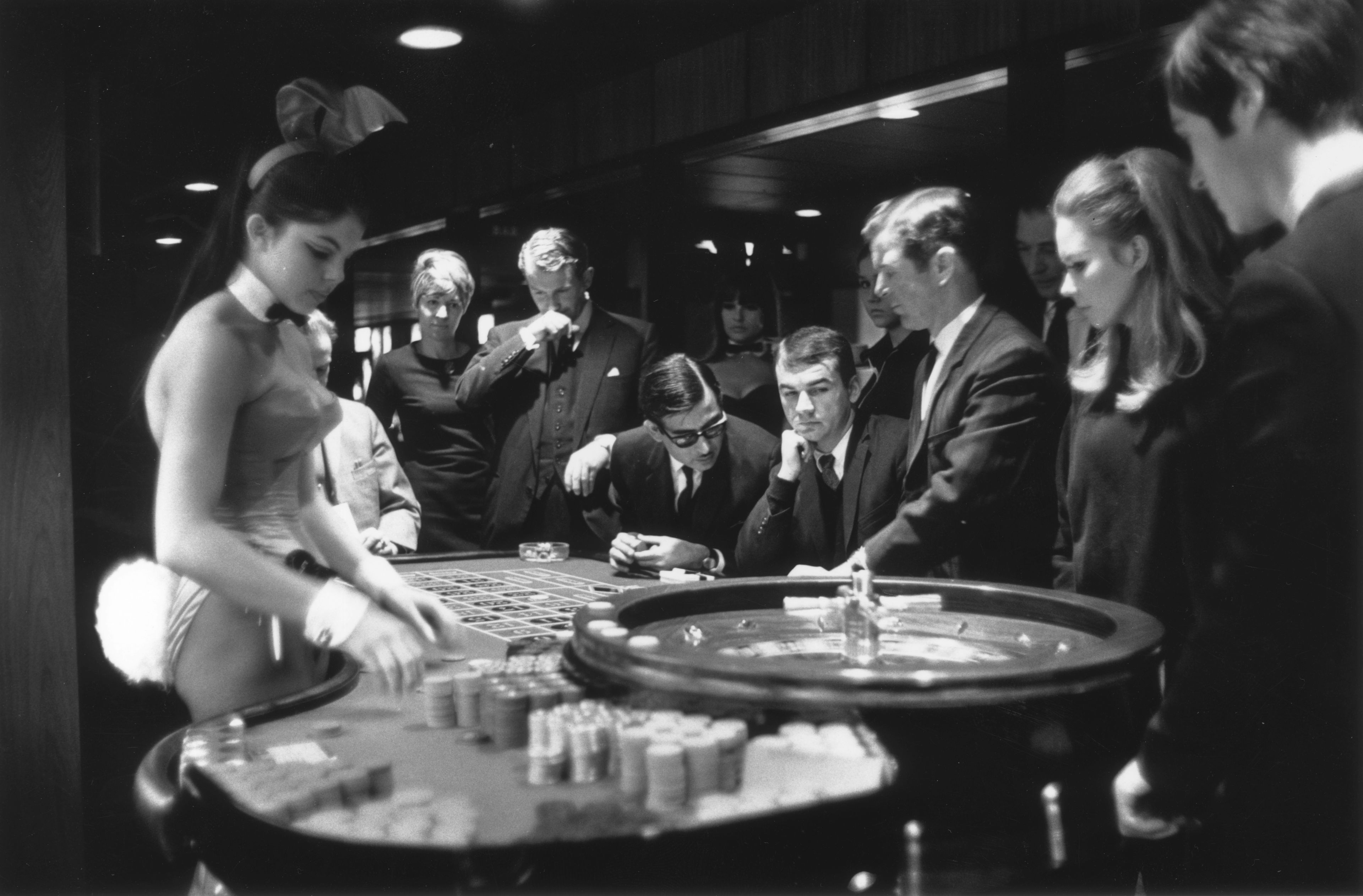 The top floor flat, behind the relatively nondescript exterior, had been designed by a trendy company called ROR which was run by Nilsson’s friend Ringo Starr and the designer Robin Cruikshank. Nilsson was away from London a lot and was very happy lending his place to his musician friends, of which he had many. 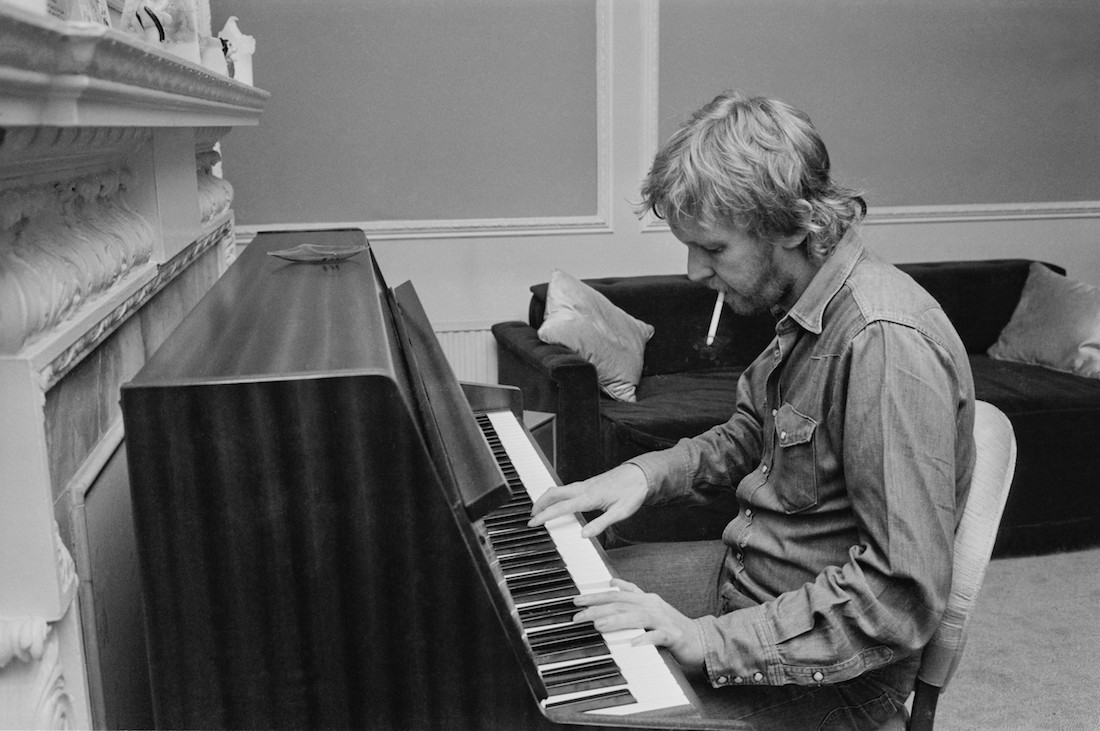 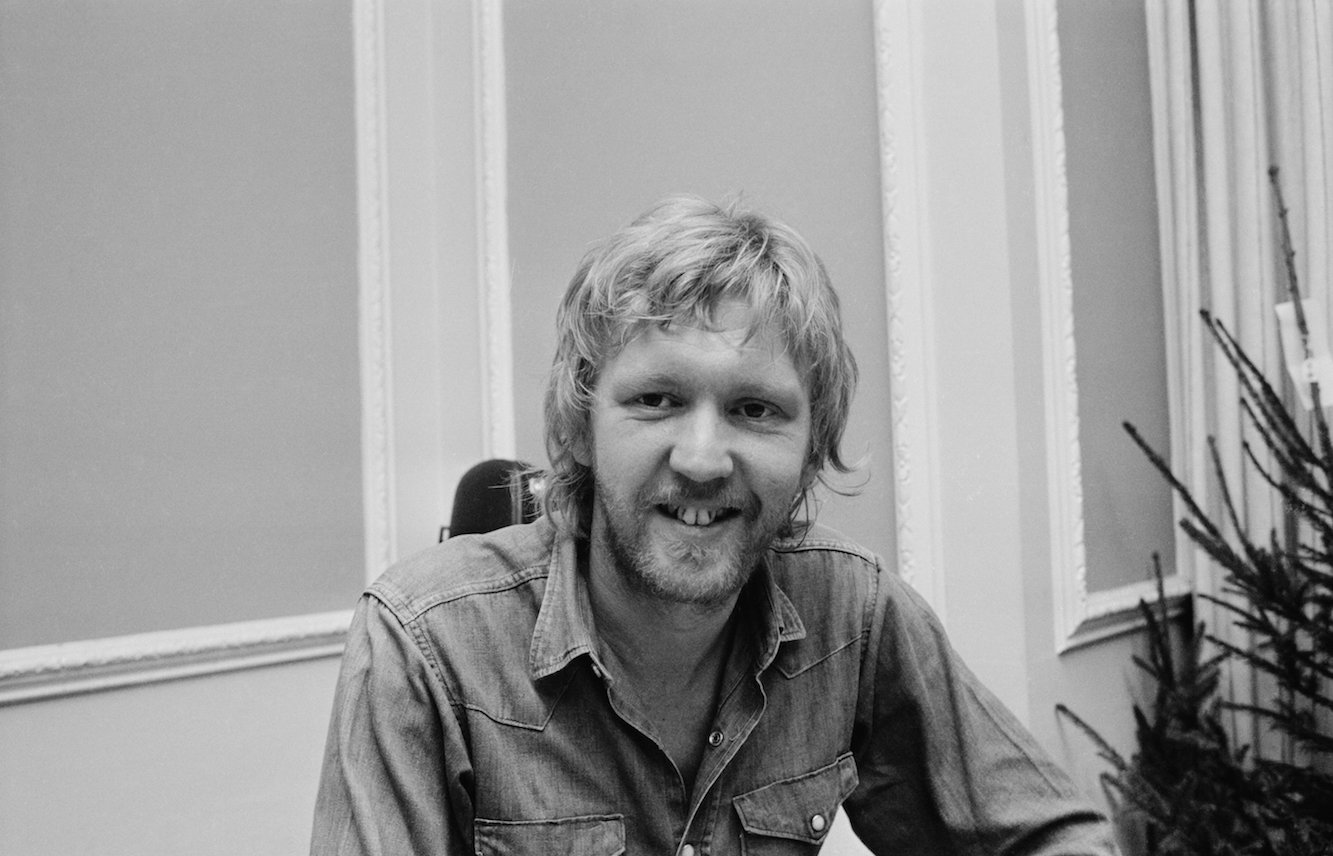 https://www.youtube.com/watch?v=-nB5VxPOoio
 
Four years after Cass Elliot died at Harry Nilsson’s flat, Keith Moon, after fitting in enough partying and convivial nights in his short life for a small town, died of an overdose of Heminevrin tablets in the very same bed. On the day he died Moon had woken at 7.30am and he’d asked his girlfriend Annette Walter-Lax to cook him a steak.
After she complained about cooking him yet another meal he said:

If you don’t like it, you can fuck off.

Unfortunately for Keith these ended up being his last words. He ate the steak while he watched the film The Abominable Dr Phibes but fell back to sleep after taking 32 Heminevrin tablets which were prescribed to help alcohol withdrawal. Six are enough to be fatal and Moon never regained consciousness. He was found dead by his girlfriend Annette later that afternoon and he was cremated at Golders Green Crematorium a week later. 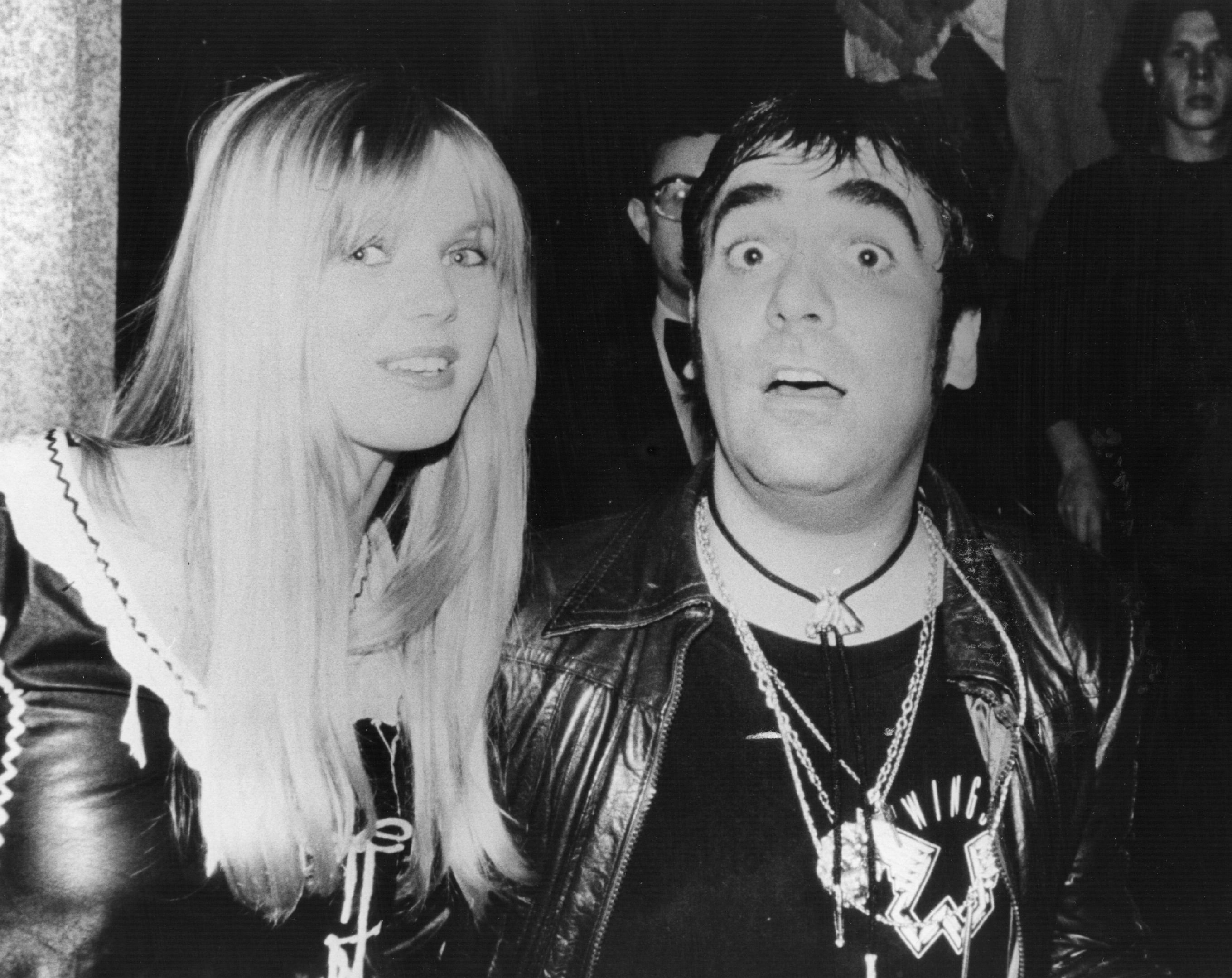 6th September 1978: Notorious wild man of rock Keith Moon (1947 – 1978), drummer of British group The Who, with his girlfriend Annette Walter-Lax at the film premiere of ‘The Buddy Holly Story’ in London, on what would sadly be his last night out. (Photo by Gary Merrin/Keystone/Getty Images) 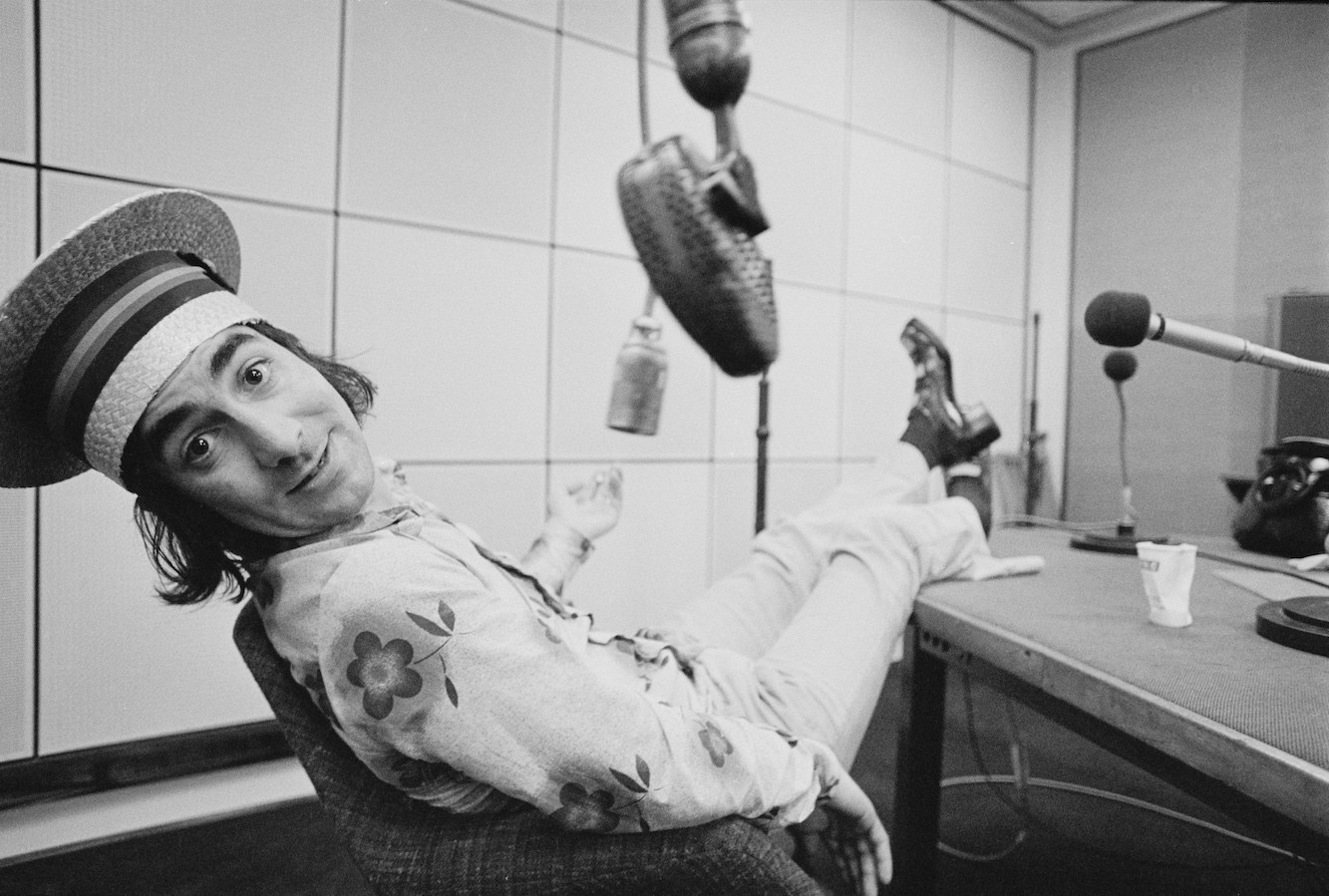 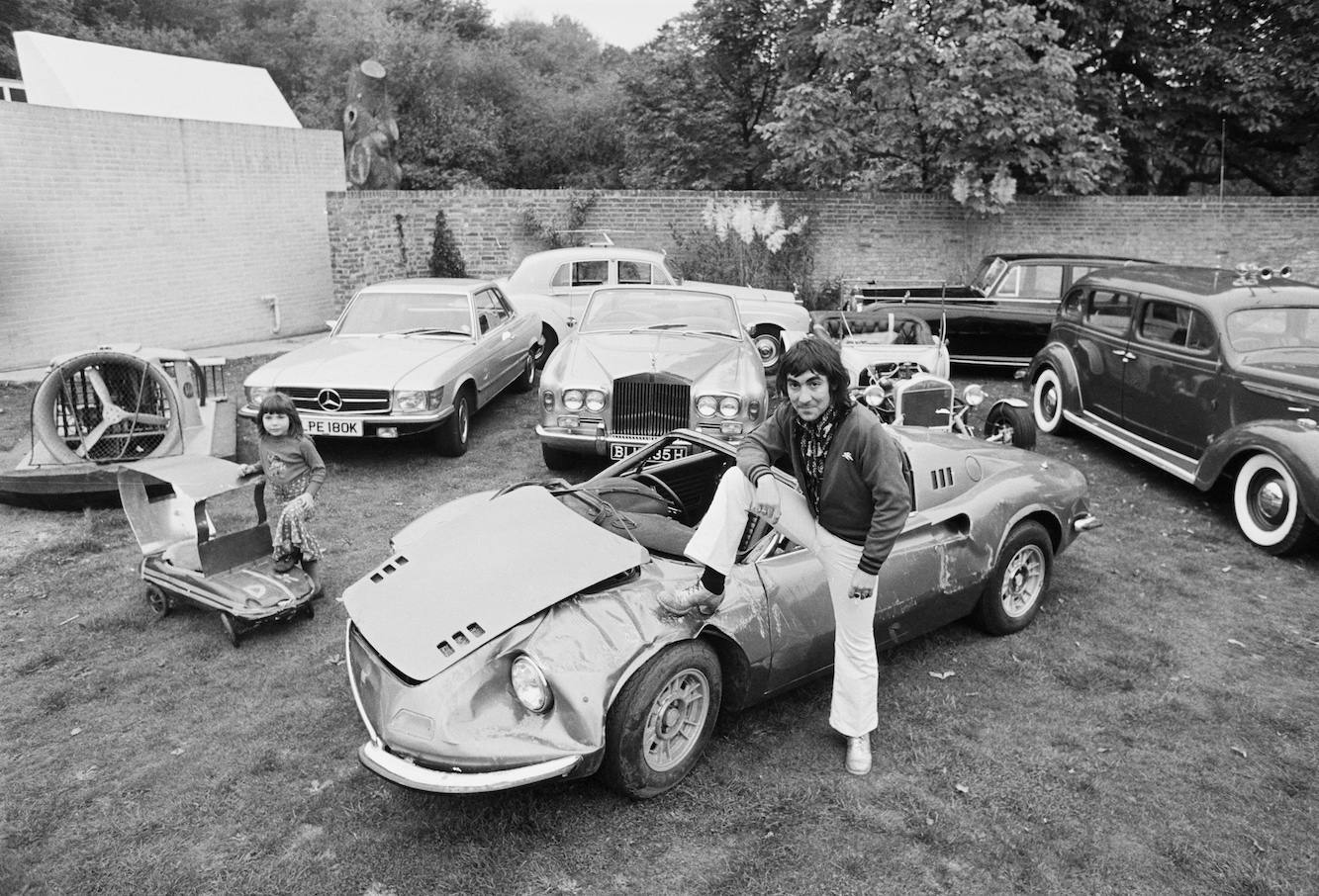 Drummer Keith Moon (1947 – 1978), of British rock group The Who at Tara, his home in Chersey, Surrey, with his daughter, Amanda (left), and some of the cars in his collection, 17th October 1972. Moon is sitting on a damaged Ferrari Dino. (Photo by Jack Kay/Daily Express/Hulton Archive/Getty Images)

Moon the Loon was only thirty two when he died, but dying young didn’t come to anyone’s great surprise – he was one of the greatest partiers ever. He once outlined his typical daily diet to a doctor:

I always get up about six in the morning. I have my bangers and eggs. And I drink a bottle of Dom Perignon and half a bottle of brandy. Then I take a couple of downers. Then it’s about 10 and I’ll have a nice nap until five. I get up, have a couple of black beauties [also known as Black Birds or Black Bombers and are a combination of Amphetamine (Speed) and Dextroamphetamine], some brandy, a little champagne and go out on the town. Then we boogie. We’ll wrap it up about four.

It wasn’t what a doctor would recommend for a long and healthy life but he fitted in some fun during his short life. Harry and Keith had become friends in the first place because of their mutual love of the booze. More often than not massive amounts of the stuff. They originally had met on a set of a film produced by Ringo Starr called Son Of Dracula with a number of other musicians. Keith remembered:

We were supposed to be on the set at six, but it was nine before everyone was there. Then somebody brought out a bottle of brandy. Me, I think. Ah-Ha-Ha-HAHAHA! And Peter Frampton said no, no, too early, and some of the others said no. But ‘Arry was standing there with an ‘alf-pint mug. I knew at that moment it was destiny put us together. Ahhhh-HAHAHAHAHAHAHA! 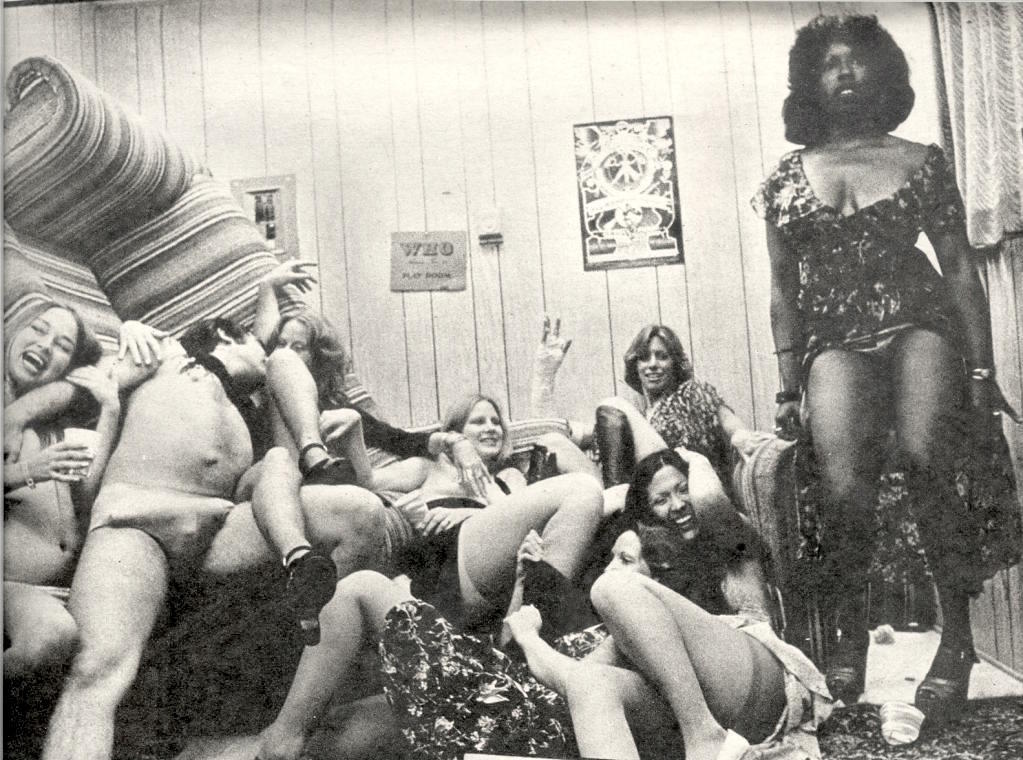 You only live once said Keith Moon again and again.

After the death of a second friend in his bed Nilsson quickly sold his flat to fellow Who member Pete Townsend and moved back to Los Angeles permanently. Of course like Cass, and especially Moon, Harry Nilsson liked having a good time and his consumption of drink and drugs were once described as Herculean, which is one way of describing pissing your talent away for over twenty years.

Marianne Faithfull once said about Harry:

We used to do drugs together. And when I say drugs, I don’t mean those airy-fairy drugs they do nowadays. I’m talking about narcotics.

Elton John once described seeing Nilsson in a recording studio:

He opened his mouth to sing, and blood poured out, he had done so much coke that his throat just haemorrhaged. And do you know what? He didn’t even notice.

 
Compared with his two friends, however, Nilsson managed to live to a relatively grand old age of fifty two before his body gave up. After surviving one heart attack in 1993 he died from another the following year. At his funeral it was said that aftershocks from the Northridge Earthquake rumbled in the background. A joke went round that the earthquake was the result of Harry getting to heaven and discovering that there were no bars.

It’s perhaps interesting to note that Mama Cass, a person it would be fair to say liked a bit of food, died from trying not to eat with a heart fatally weakened by too many diets. Coincidentally Keith Moon, a man with a prodigious appetite for booze, died from an overdose of medicine prescribed in an attempt to stop him drinking.

Not long before his first heart attack Nilsson found out that his entire $5 million fortune had been embezzled leaving him and his family almost destitute and it was said that he never really recovered from the shock. In 2001 the building at Curzon Place containing Harry Nilsson’s old flat was bought by a developer who completely changed the interior and the three flats on Harry’s floor were knocked into two luxury flats. In 2002 these were placed up for sale at one million pounds each. 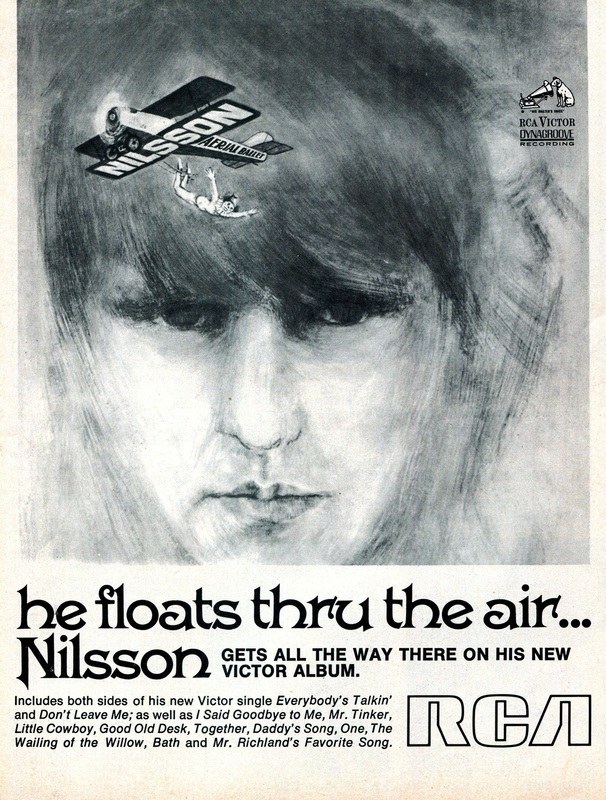 This is an excerpt from Rob Baker’s book  Beautiful Idiots and Brilliant Lunatics – a signed copy can be bought here.