THE LATE 1960s to mid-70s were a manic depressive time period in music, populated by exultant highs and soul crushing lows.  The highs came in the form of disco and bubblegum pop via ABBA, The Bee Gees and their ilk.  The lows came in the form of devastating testaments to inner sadness and existential rage.  Perhaps it was Vietnam, recreational heroin use, and an economy that was in the crapper that caused such a swell in depressing anthems.  Who knows?  What is known is that this time period was fertile ground for misery put to melody, and whittling them down to a list of 15 was a daunting task indeed, but here goes…. 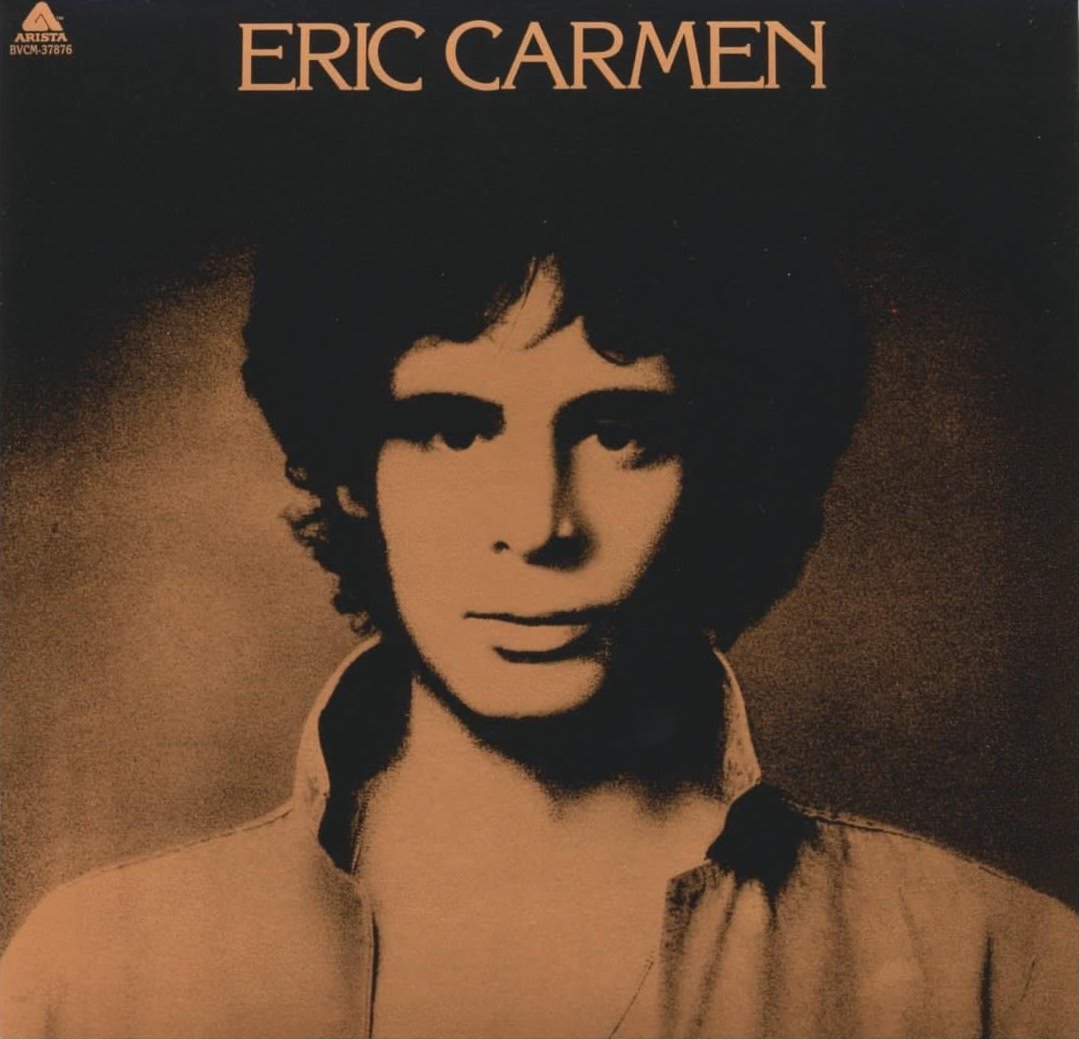 It’s not so much the lyrics as the morose delivery under a melody lifted from Rachmaninoff’s Piano Concerto  No. 2.  Carmen sounds so deeply depressed that you half expect to hear a gunshot at the end of the song. 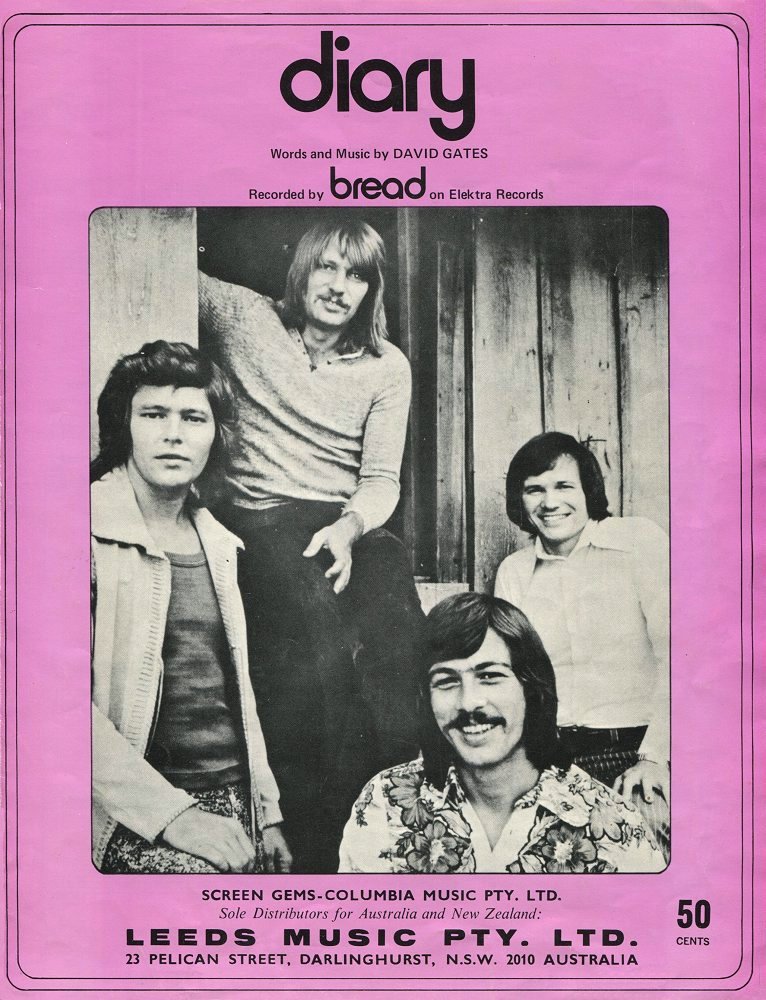 I found her diary underneath a tree.
And started reading about me.
The words began stick and tears to flow.
Her meaning now was clear to see.
The love she’d waited for was someone else not me

Do not play this at a party as it will cause long-term sorrow in the hearts of men and women alike.  The combination of sparse acoustic guitar and violin with Gates’ downcast voice make for a track utterly devoid of cheer. 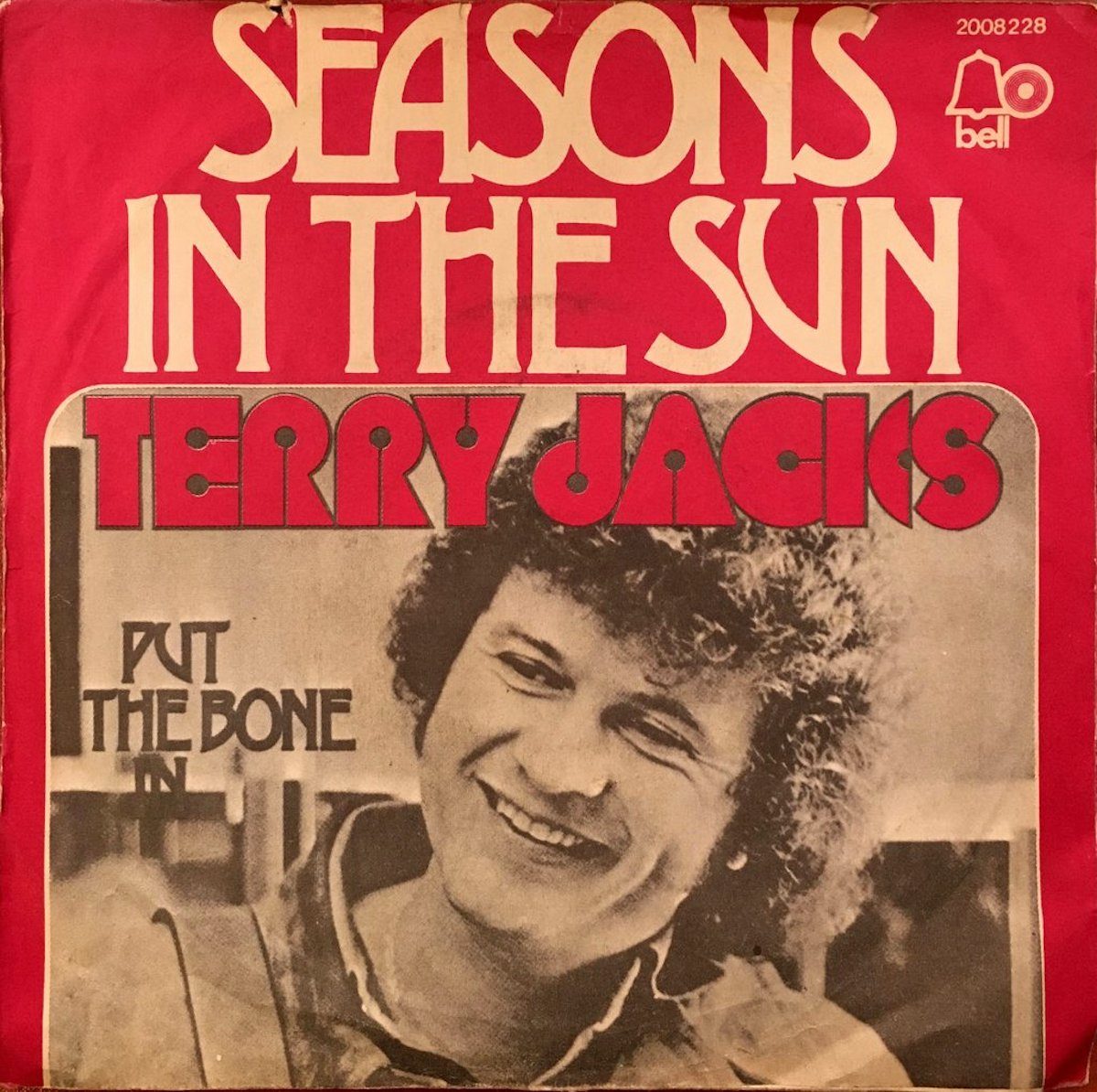 TJ removed the bit about the wife’s infidelity when he adapted “Le Moribond” by Belgian Jacques Brel.  Still, these last words of a dying man are guaranteed to destroy any shred of happiness in you.

12. “Sorry Seems to be the Hardest Word” by Elton John 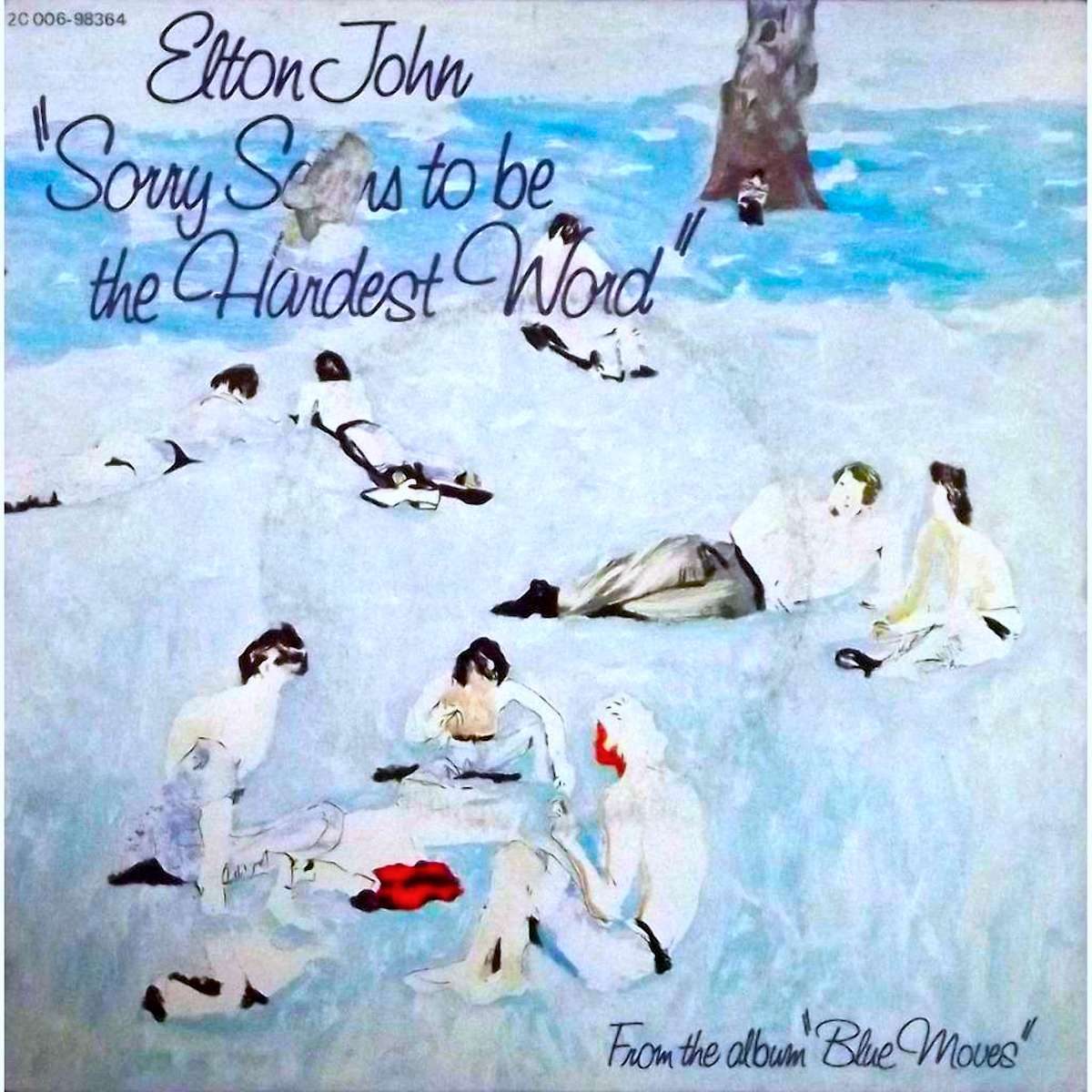 It’s sad (so sad)
It’s a sad, sad situation
And it’s getting more and more absurd.

This from the man that brought you “I Think I’m Gonna Kill Myself “which had much more dire lyrics.  However, “Sorry” is a much more depressing package.  If you are even feeling slightly listless and glum, don’t listen to this song.  The levee will break, tears will flow. 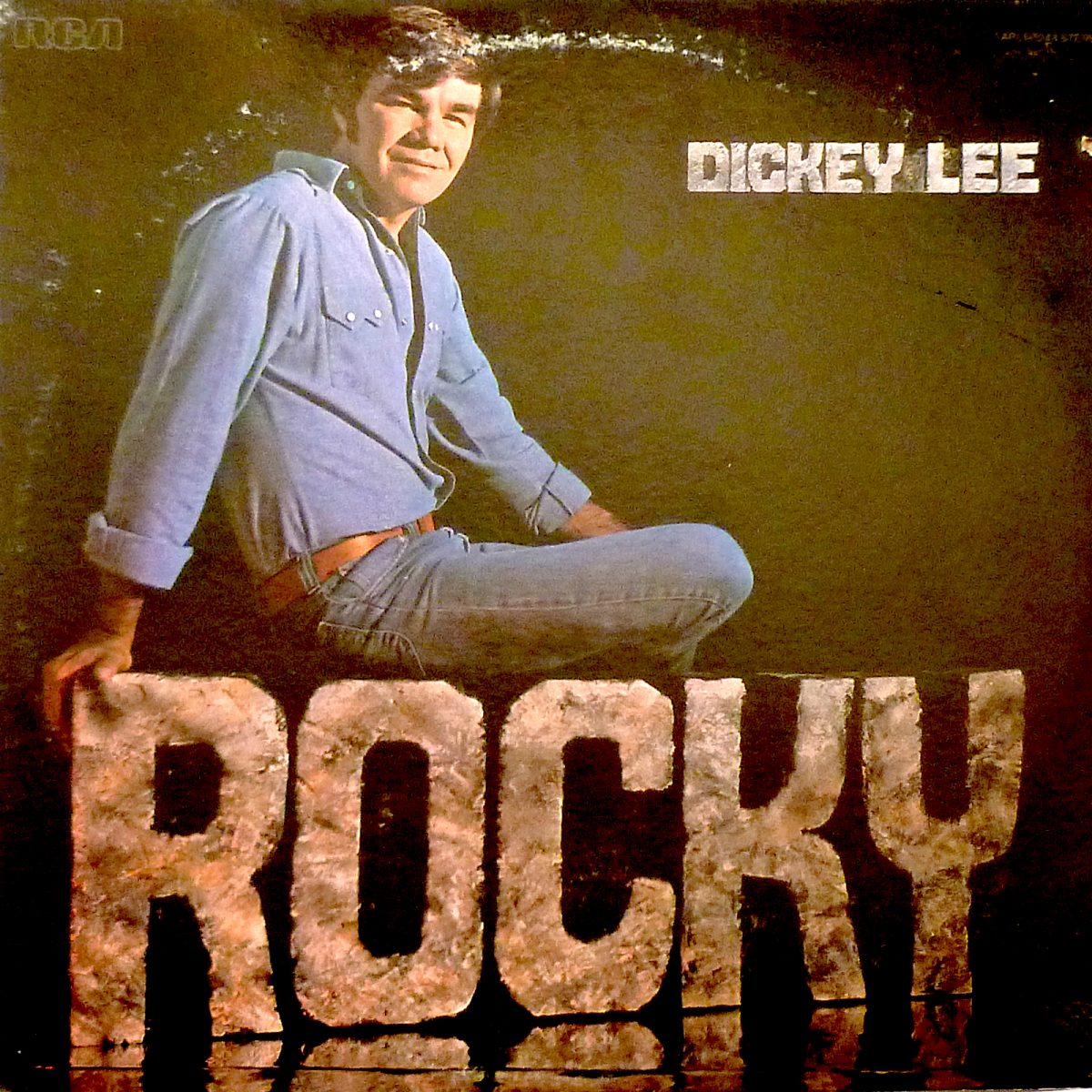 I was proud and satisfied, life had so much to give
Till the day they told me that she didn’t have long to live
She said, “Rocky, I never had to die before, don’t know if I can do it.”
Now it’s back to two again my little girl and I
Who looks so much like her sweet mother, sometimes that makes me cry

I know it’s a gimmicky song cleverly designed to pull at my heartstrings – but it works.  There’s something about her utterance “I never had to die before, don’t know if I can do it” that causes the floodgates to open every time.

10. “Suicide is Painless” by Johnny Mandel  and Mike Altman 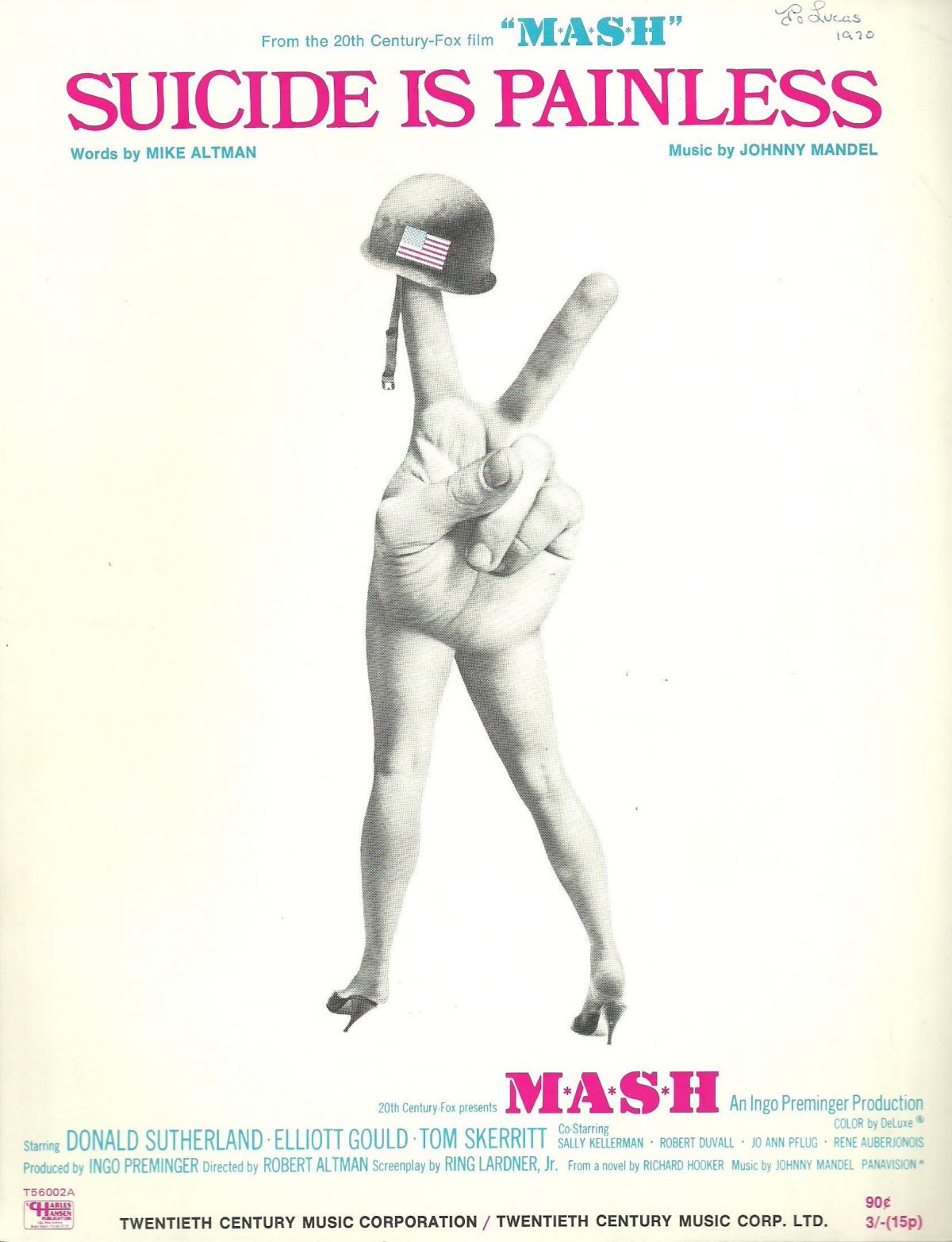 The game of life is hard to play
I’m gonna lose it anyway
The losing card I’ll someday lay
So this is all I have to say.

Of course, this was the theme music for M*A*S*H* (1970) and later an instrumental version for the TV show.  The story goes that the film’s director, Robert Altman, gave the task to his teenage son to write the lyrics for “the stupidest song ever written”.  This beautifully nihilistic goldmine is what came out.  In context of the film, it’s ironic and silly; however, on its own it becomes a haunting anti-paean of morbid apathy.

9. “Ruby, Don’t Take Your Love to Town” by Kenny Rogers and the First Edition 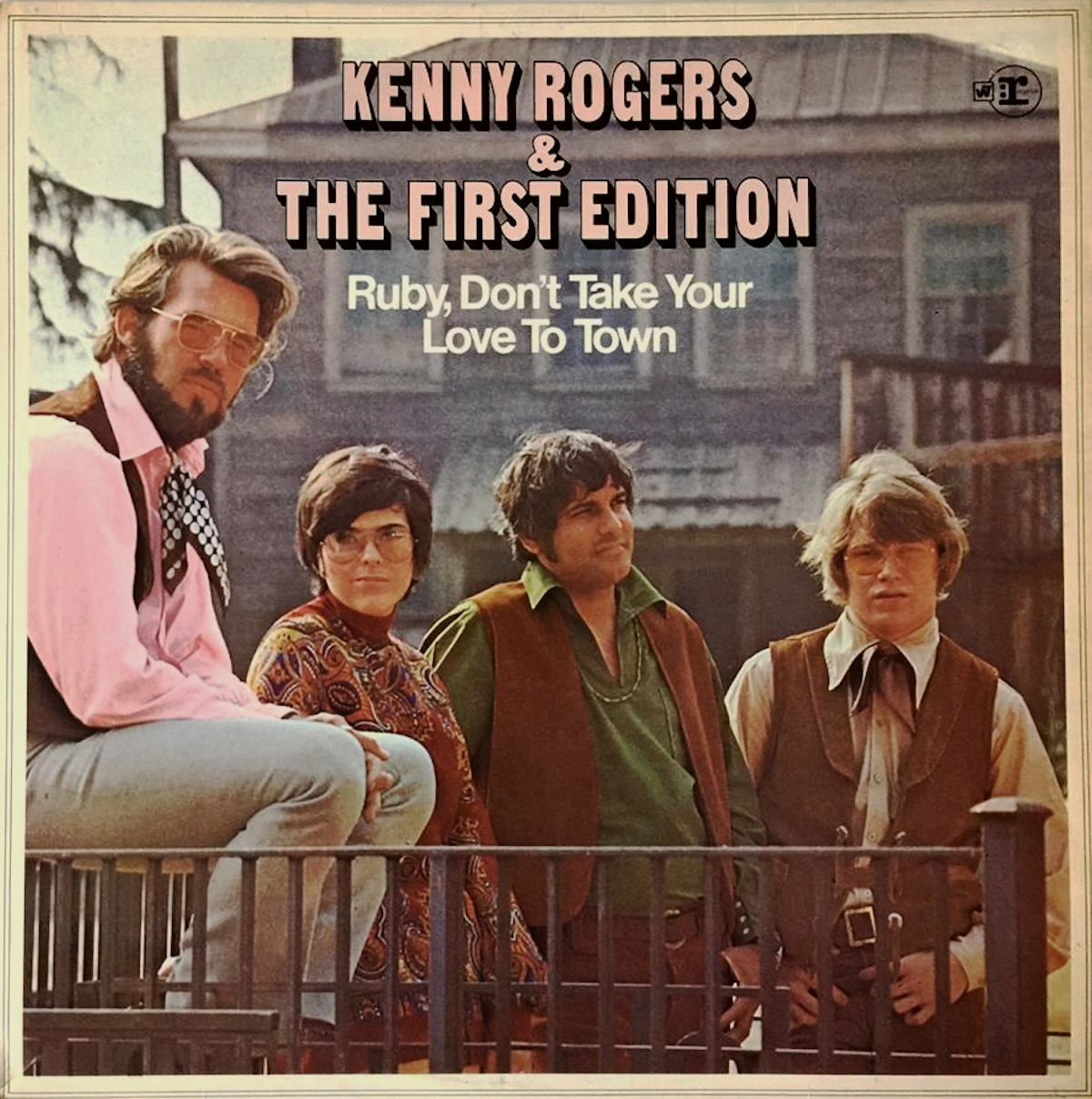 It’s hard to love a man whose legs are bent and paralyzed,
And the wants and needs of a woman your age really I realize,
But it won’t be long, I’ve heard them say, until I’m not around,
Oh Ruby, don’t take your love to town

You see, he was injured in ‘Nam, and now his wife fulfills her sexual appetite downtown.  He’s going to die soon anyway; can she not rein it in for just a little while longer?

8. “Reflections of My Life” by Marmalade 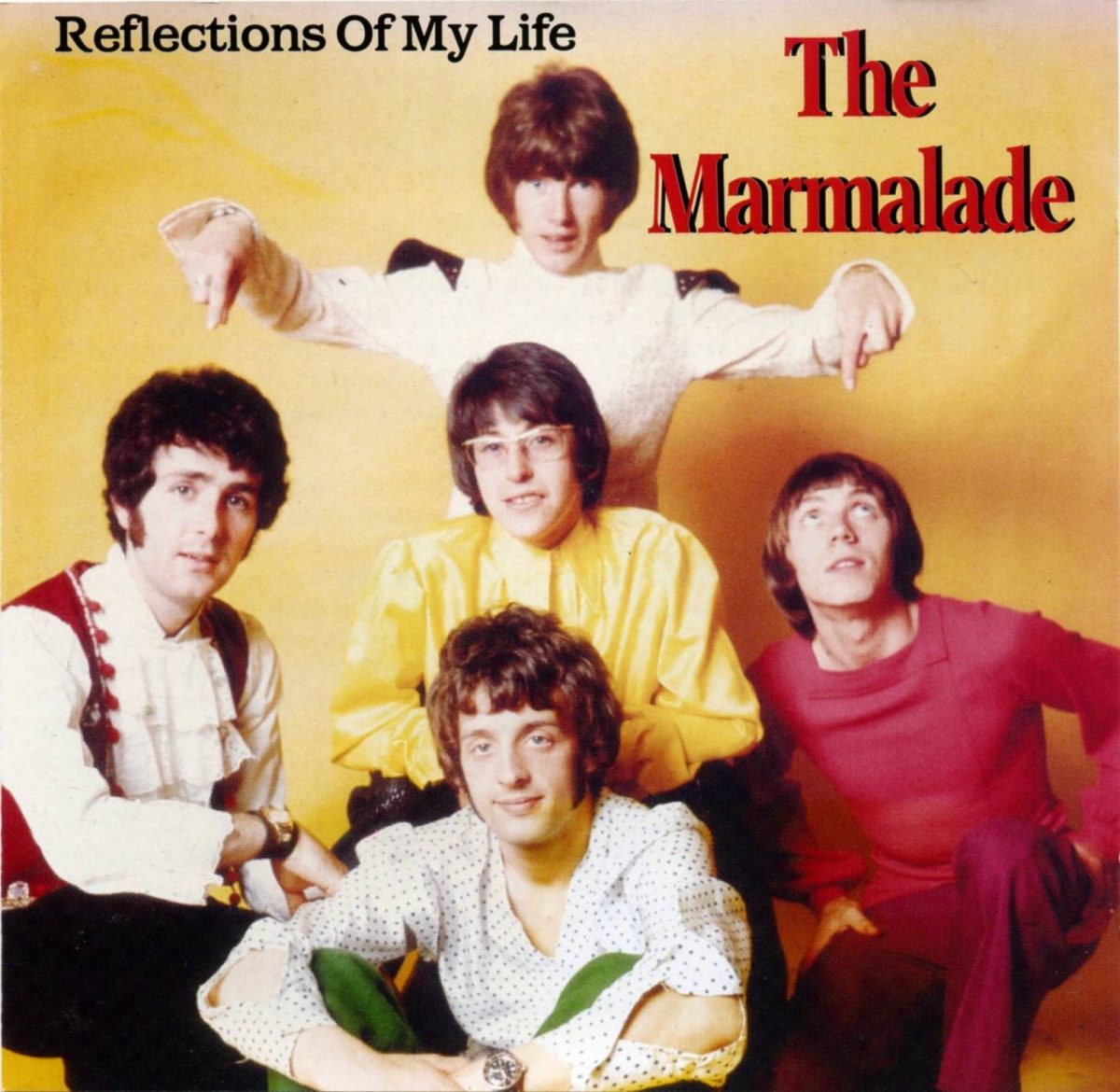 The single should have come with a packet of MDMA crystals to counterbalance the onset of profound grief. 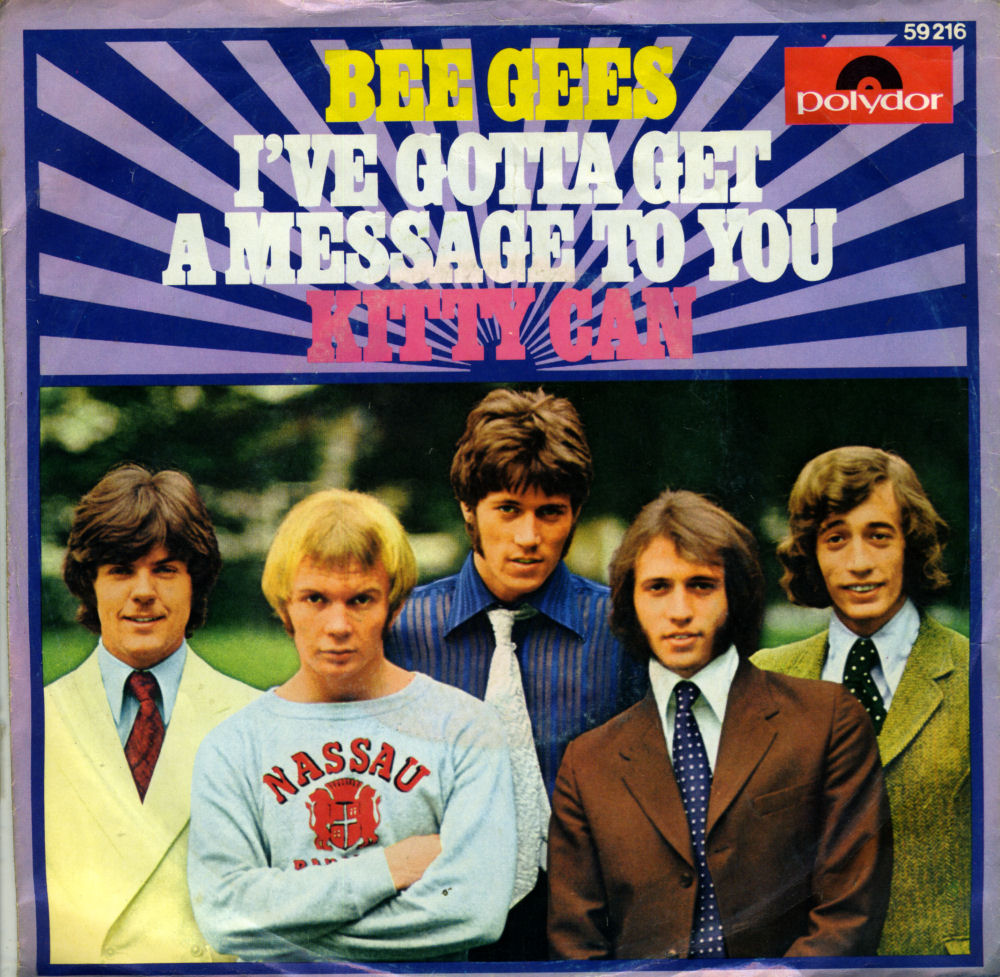 Now I’m crying but deep down inside,
well I did it to him, now it’s my turn to die.

Didn’t I just mention in the opening paragraph that The Bee Gees were responsible for some of the happiest music of the era?  Yet here they are with among the most depressing – a dichotomy, those Gibb boys.  This one is an autobiography of a man as he’s readied for execution who murdered a guy for sleeping with his wife.  A far, far cry from “You Should be Dancing”. 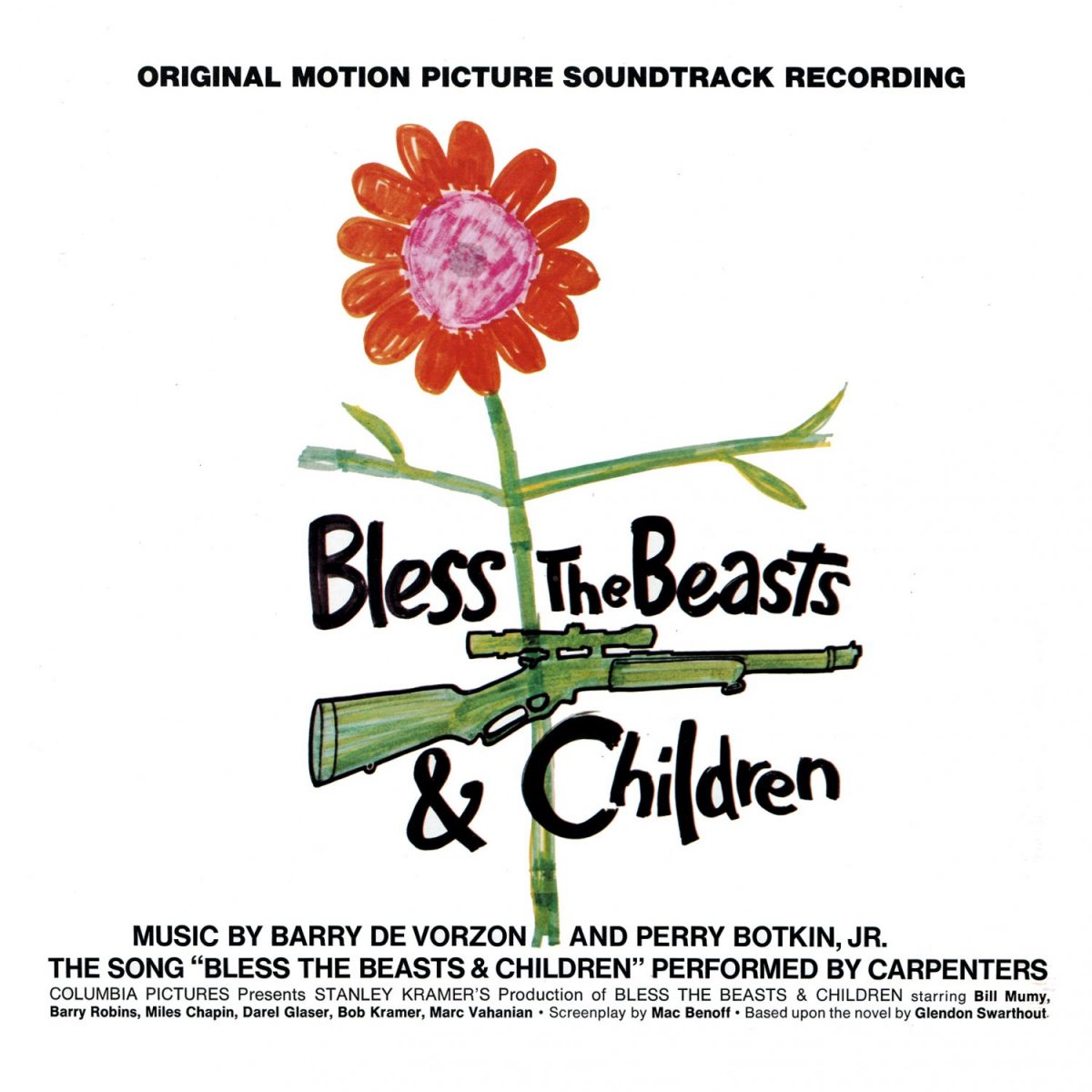 Originally used for the unbelievably depressing film Bless Beasts and Children (1971), this instrumental is the perfect background music to slit your wrists to.  If you could bottle all the sadness of the world and then condense it into sound, this would be the result.  The tune would be later used for the soap opera Young and the Restless and Nadia Comăneci’s theme music for the ’76 Olympics.  However, it’s ability to inspire suicide or lifelong melancholy is never more acute than as the incidental music for the ’71 tear jerker. 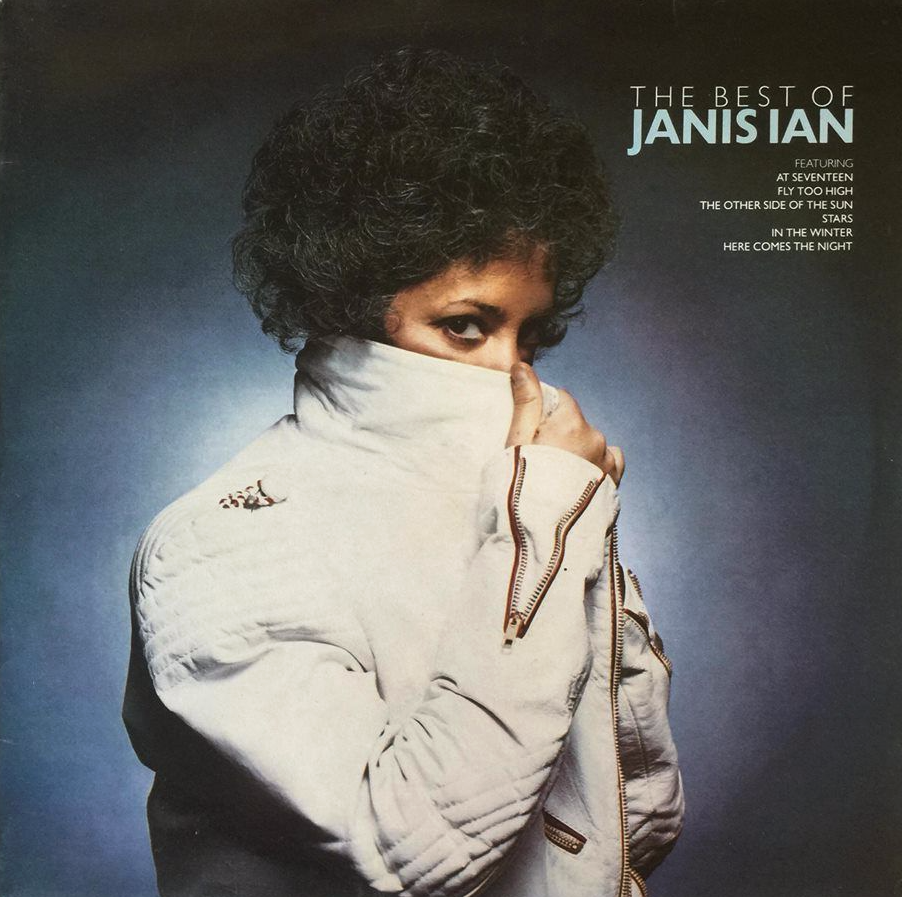 Other songs about lonely girls (“Eleanor Rigby” by The Beatles, “A Rose for Emily” by The Zombies) are sad, but don’t cut to the marrow quite like this one.  Paul’s later Lonely Girl hit “Another Day” will leave you feeling similarly hollow inside, but Ian’s song will forever be the zenith among devastating anthems for the unpopular. 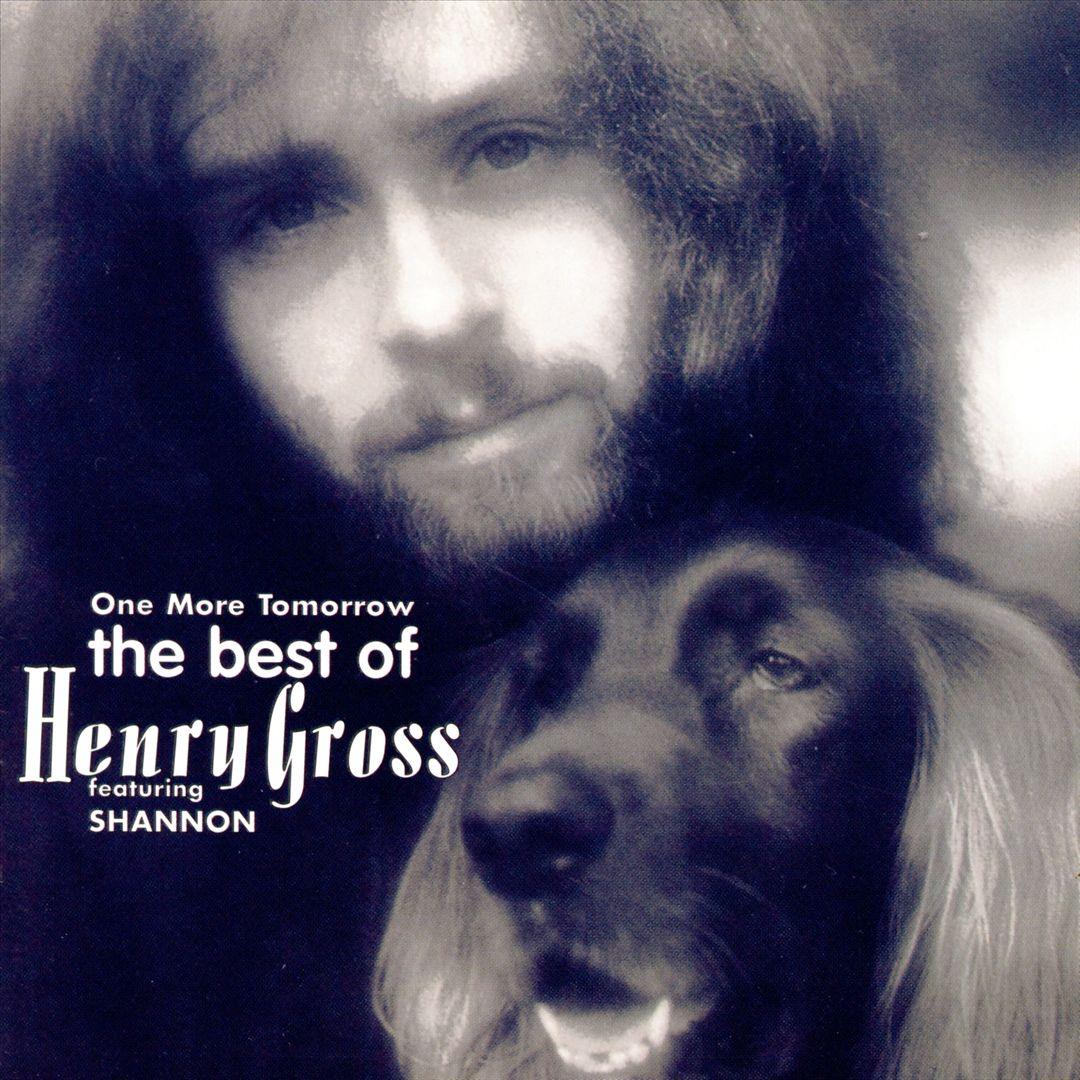 It’s a song about a dead dog (specifically, Beach Boy Carl Wilson’s Irish Setter).  Many a 70s macho male strained to fight back the tears when this came on the radio; but, it was a futile task.  Let the tears rain down, 70s male.  Let them wash the pain away.

3. “Rainy Days and Mondays” by The Carpenters 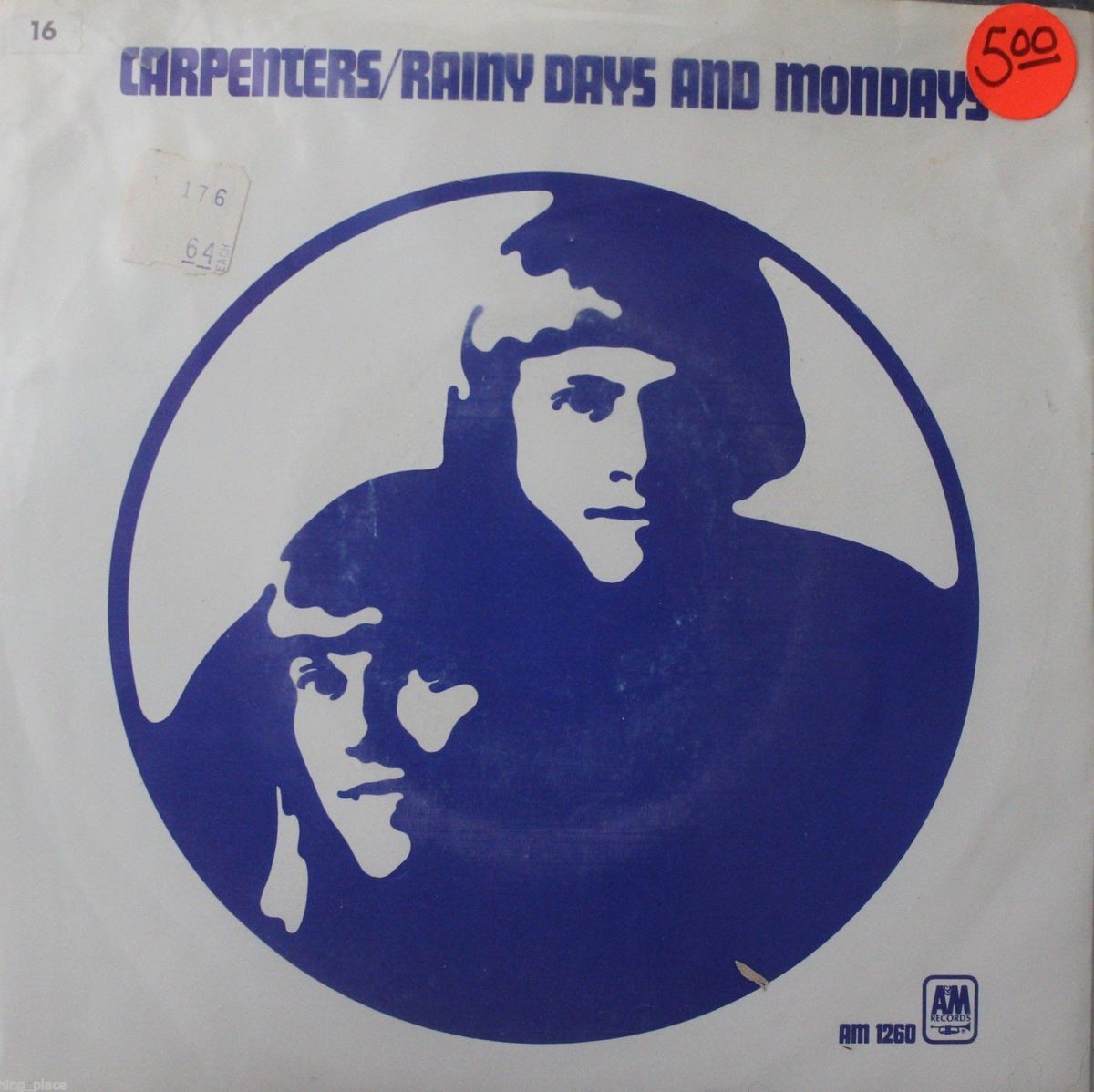 Karen Carpenter could sing me “Happy Birthday” and I’d feel sad and alone.  There was something about her voice and delivery that just sucked all the joy out of my soul.  Well, when you combine that talent with particularly dreary lyrics, it’s a match made in purgatory.

2. “Cats in the Cradle” by Harry Chapin 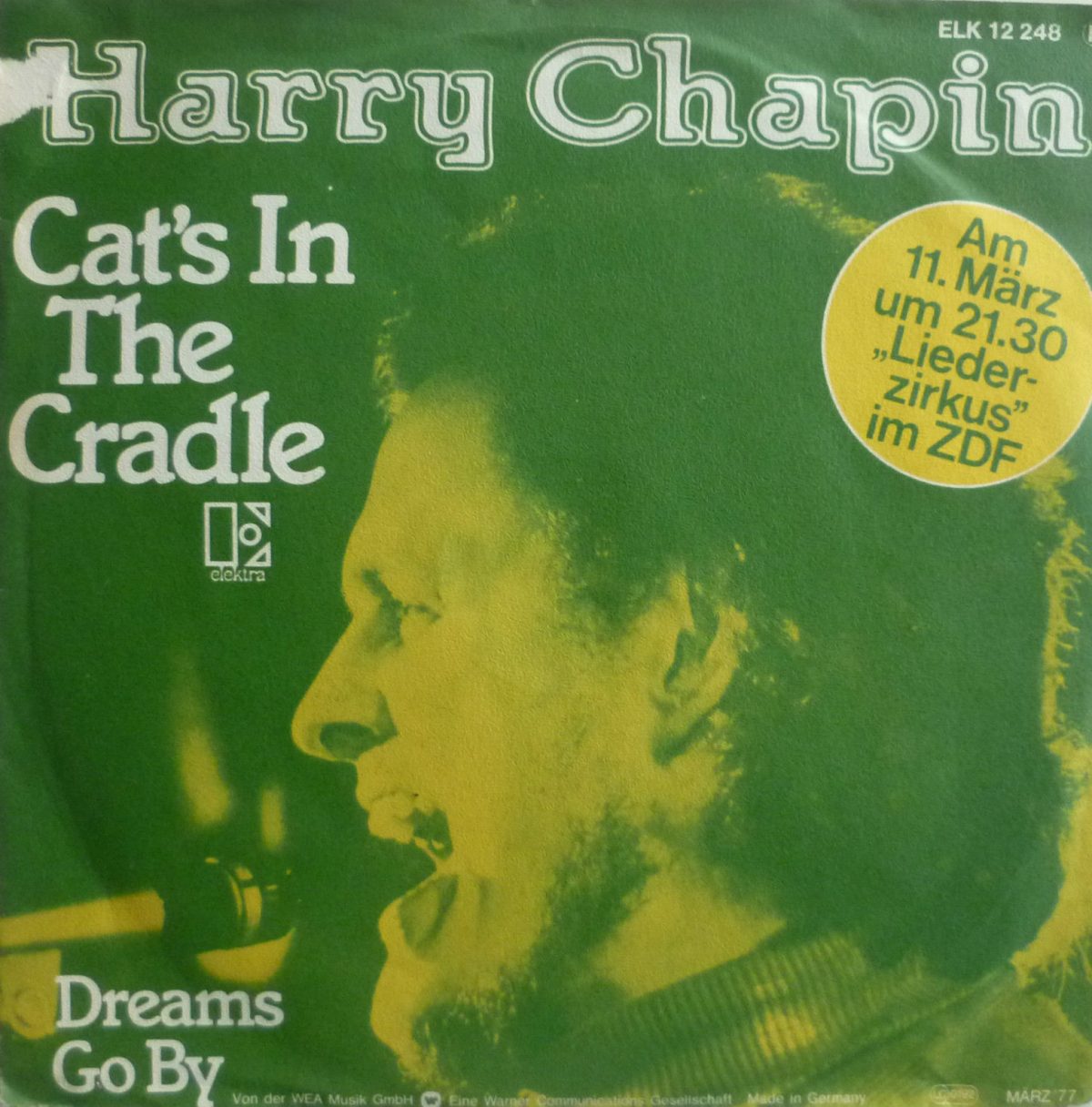 And as I hung up the phone, it occurred to me
He’d grown up just like me
My boy was just like me

I didn’t want to include this: it’s too overplayed and so clichéd.  Yet, when I was compiling this list I gave it another listen…. and it was like Chuck Norris had scissor-kicked me squarely in the heart.  There’s just something about this father-and-son tale that causes me to erupt into convulsive tears.  And to be truthful, it doesn’t even really apply to my life – yet there it is.  A weepy, sobby little song that has elicited misery for the past 40 years and is still going strong. 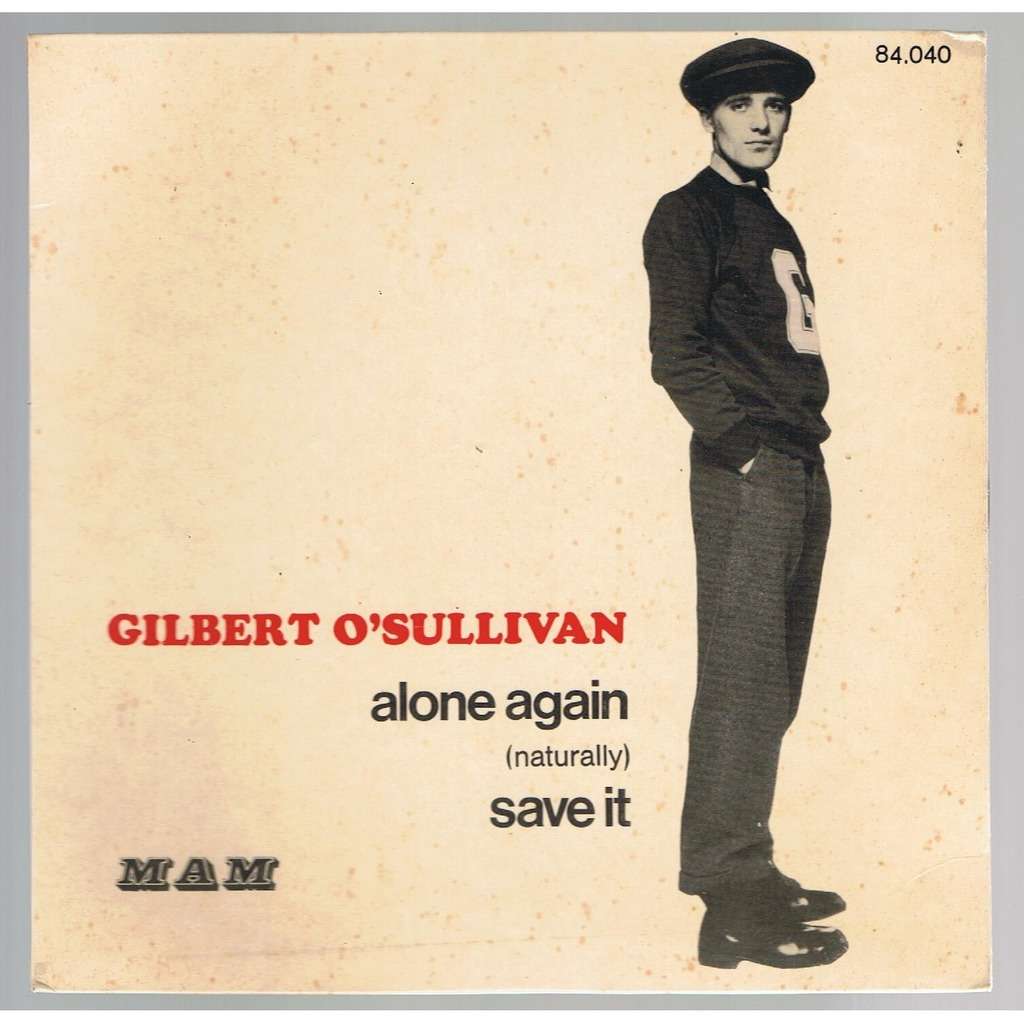 But as if to knock me down
Reality came around
And without so much, as a mere touch
Broke me into little pieces
Leaving me to doubt
All about God in His mercy
For if He really does exist
Why did He desert me?

Only in the 1970s could you have a song reach Number One which amounts to a soul-shattering plea to the heavens for an understanding of human suffering.  Try and picture the imagery Gilbert conjures up and your bottom lip will quiver, your eyes will itch – it’s just so gut-wrenchingly sad.

Now, if you’ll excuse me, I need to put on some ABBA to restore any remnants of positivity left within my aching heart. “Dancing Queen” here I come.

Should you wish to go through some musical anguish and pain here’s a spotify playlist for all the above. Good luck!