It’s rare to find a show that was good from beginning to end. Nearly every TV series, if it stays around long enough, will eventually jump the shark.  Here’s a list of shows from the 1970s-80s which had a pretty good run, up until their final season when things went to hell.

The writing had already gone south, but the coup de grâce was the complete lack of Shirley.  The entire cast and crew were clearly on autopilot, milking the last remaining drops of whatever magic it once possessed.

All in the Family

Meathead was the perfect foil to Archie Bunker; but, Reiner and Struthers had left in season eight.   Their absence in season nine was palpable, and matters were made worse by the addition of the intrinsically unlikeable Stephanie.

This show’s last season took jumping the shark to a new low.  First, Barbarino goes bye-bye, then Kotter himself recedes into the abyss.  And while these two waved adios, we are greeted by the most annoying Sweathog ever (which is saying something indeed, in light of Arnold Horshack) – the dreaded Southern Sweathog.  (insert dramatic music)

Chico and the Man

No one cared about “the Man” – we all liked Chico.  But Freddie Prinze decided to kill himself, and we were left a show that, by all rights, shouldn’t have continued to exist.  Not only had it lost all its mojo, but we all knew the tragedy that had happened, and so the attempts at humor rang hollow and sad.

Whose bright idea was it for this crack commando unit on the run for a crime they didn’t commit, to now actually work for the government.  General Stockwell, the group’s primary protagonist, was now their boss. No longer on the run, they ceased being soldiers of fortune, and became…. pointless.

“Book ‘em Danno”… oh, wait- Danno is gone (James MacArthur said no-thanks to the last season).  Even Chin Ho was missing. What was left was a shell of its former self – like Laverne & Shirley, All in the Family, Welcome Back Kotter and Chico and the Man, it was missing critical personal and found lacking. 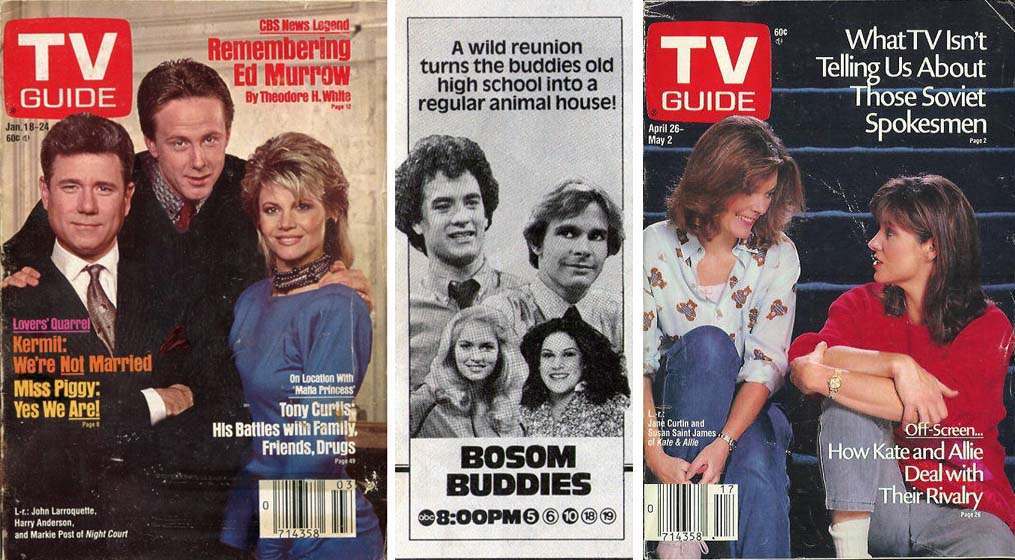 Bad seasons happen – I understand that.  But this was a train wreck.  The writers basically phoned it in – the jokes were terrible, and no one even stayed in character – everyone’s traits/personalities which had been cultivated over the previous 8 seasons were quite literally shat upon. In the end, Bull is taken into space by aliens….. enough said.

The entire premise of the show was obliterated.  No longer did they disguise themselves as women – they were found out, their cover blown.  You could argue that the gag had grown stale… but it was replaced by no gag at all.  Instead, they became typical 1980s successes, running an advertising agency.

Let’s face it, the show wasn’t that great to begin with.  But the final season where Allie marries Bob and moves into a posh high-rise…. with Kate, who is still desperately single?  Awkward – but not as awkward as Allie finding a condom in Chip’s pocket, which also, most unfortunately, happened.

Where to begin? Al’s had burned down, Richie had left the show, Ralph had left the show, and so had Joanie & Chachi – but they guest starred so many times, they were like regular cast members.  Worst of all, Fonzi became a respectable member of society and the Patron Saint of Shark Jumping, Ted McGinley (the high school principal for chrissakes) had inexplicably become part of the main cast.  Disaster, thy name is Happy Days Season 11.

I think Hagman was pretty much drunk the entire season.  J.R. Ewing had been an amoral badass for all previous seasons – now he’s in an asylum, and pretty much a hopeless loser.  Had Hagman laid off the sauce, would things have been better?  With storylines this lame, it’s doubtful.

Two things often spell doom for a sitcom: (1) the addition of a cute little kid (ex. Family Ties and The Brady Bunch – see Heirs of Cousin Oliver: 8 Awful TV Show Additions)  and (2) changing networks (ex. Hazel).  Diff’rent Strokes suffered from both.  Plus, Gary Coleman’s ailments were obviously taking their toll – his cuteness was gone, and he was even slurring his lines.  For a show that had featured a child molesting bicycle repairman (see   TV Nightmares: 10 Highly Disturbing Sitcom Episodes of the 70s and 80s) it’s hard to believe, but things got even more uncomfortable to watch.