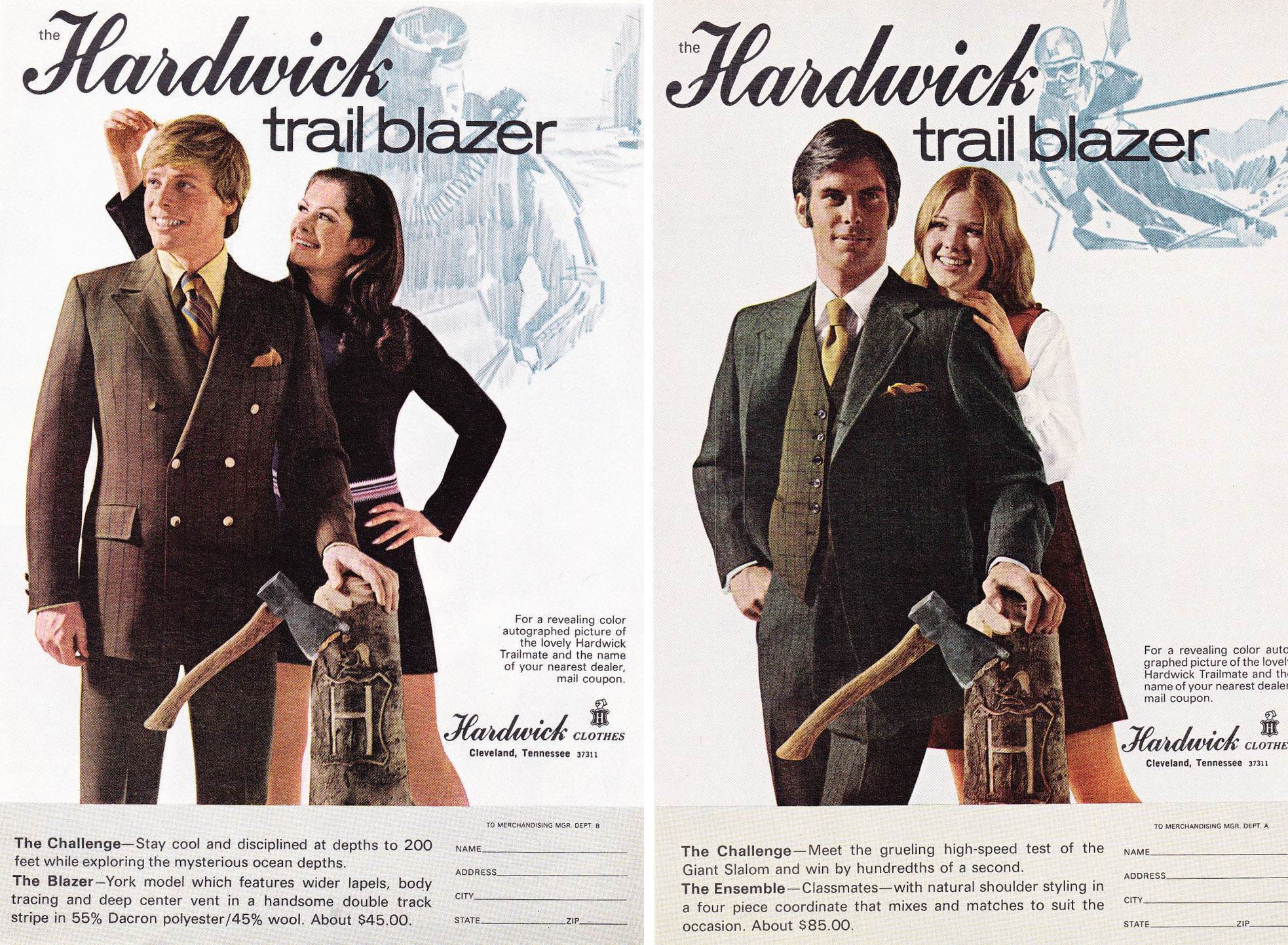 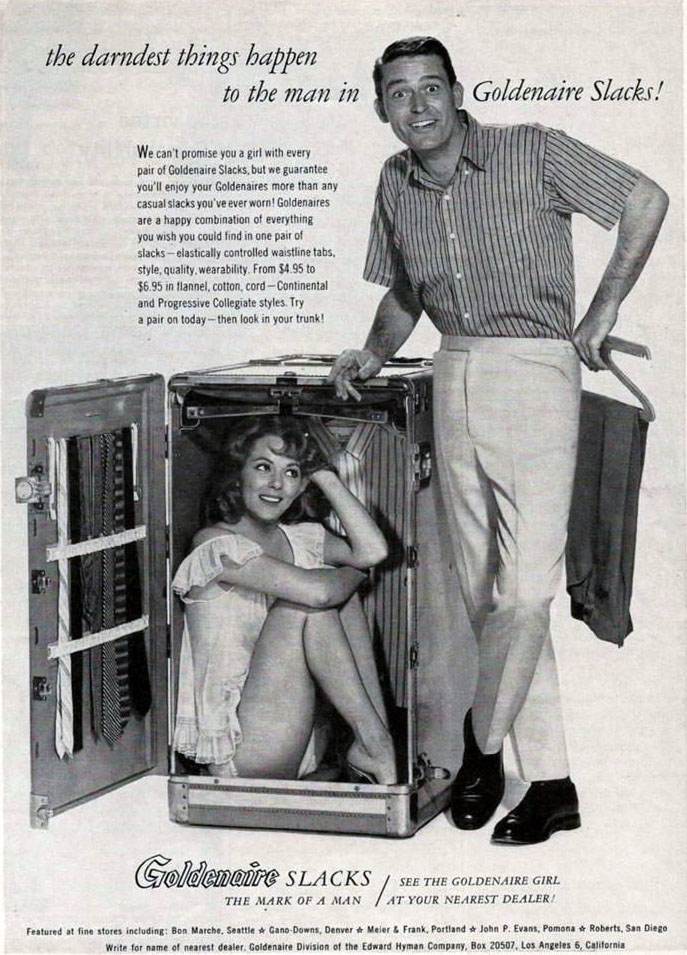 Yes, the darndest things happen, like women in nighties risking suffocation by stowing away in your airtight locker.  Those kind of things. 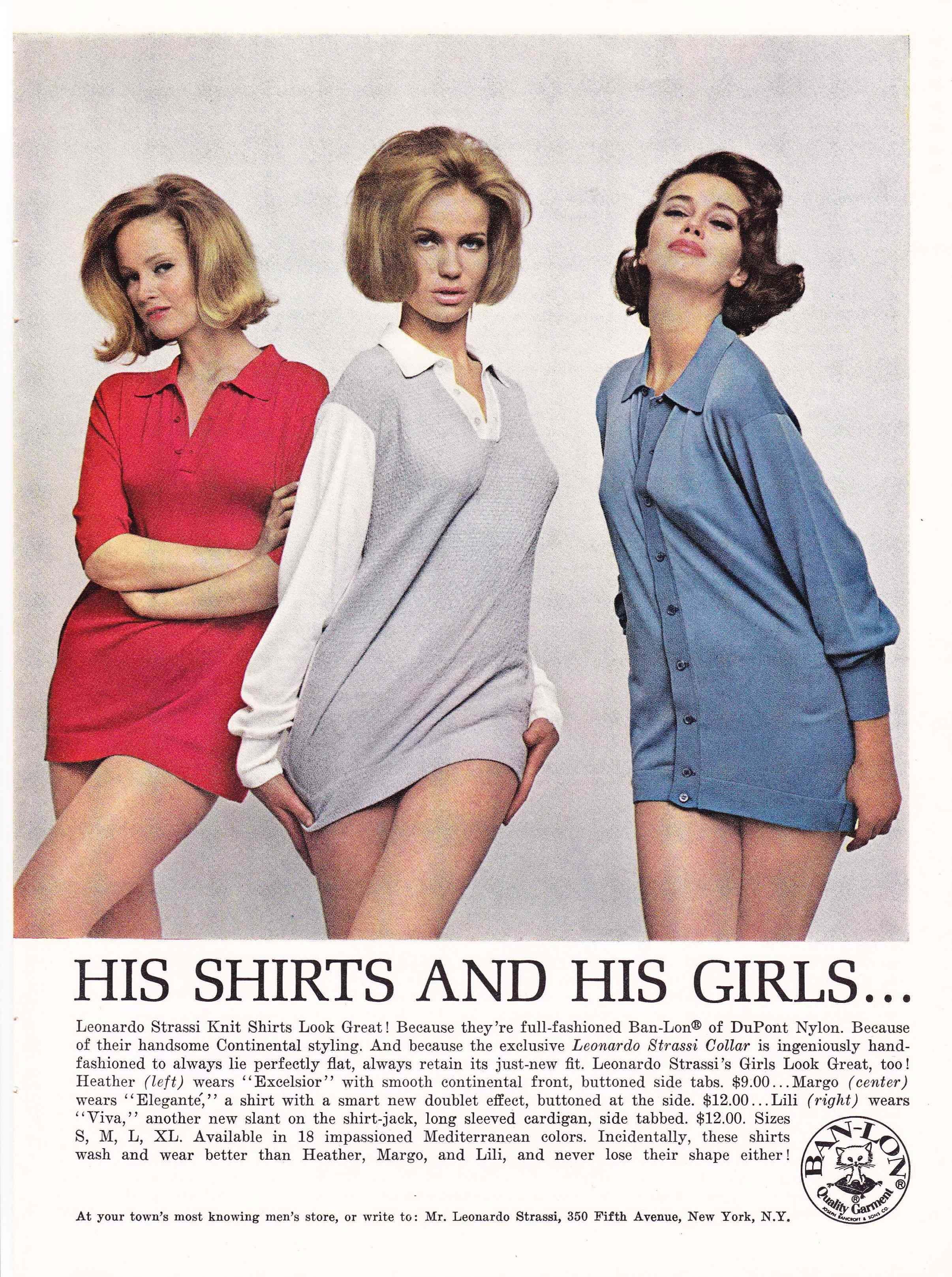 With names like “Excelsior”, “Elegante”, and “Viva” you know they’re classy.   If that’s outside your budget, check the clearance rack for the “Lowbrow”, “Philistine” and “Functionally Illiterate’ brands. 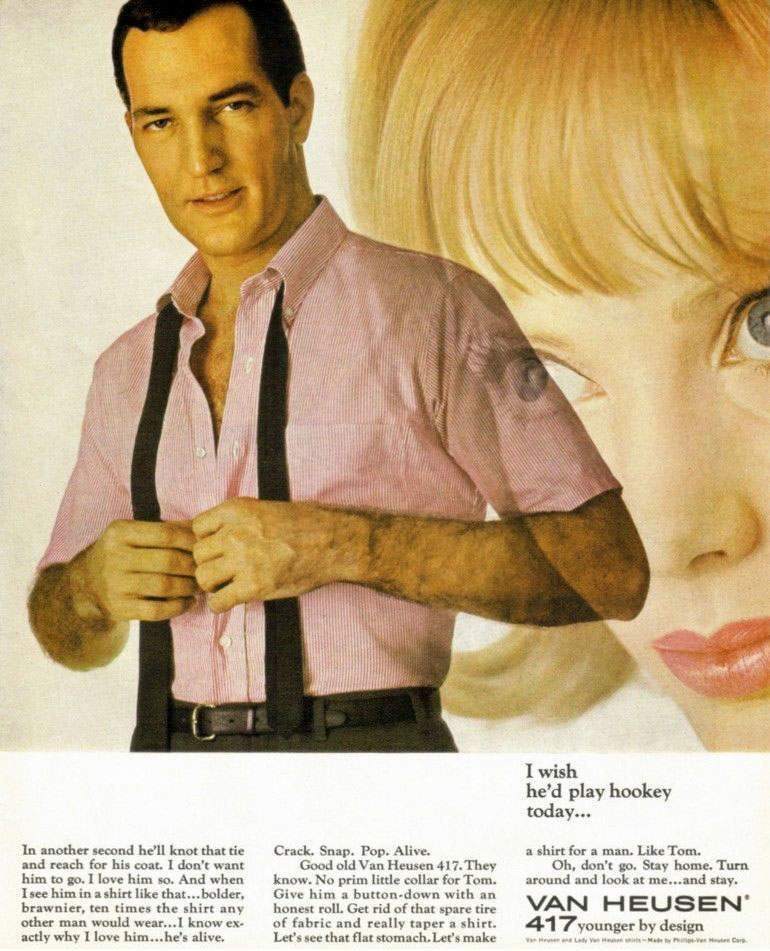 “in another second he’ll knot that tie and reach for his coat.  I don’t want him to go, I love him so.”

If I were this guy, I’d be a little wary of this overly attached girlfriend.  Creepy. 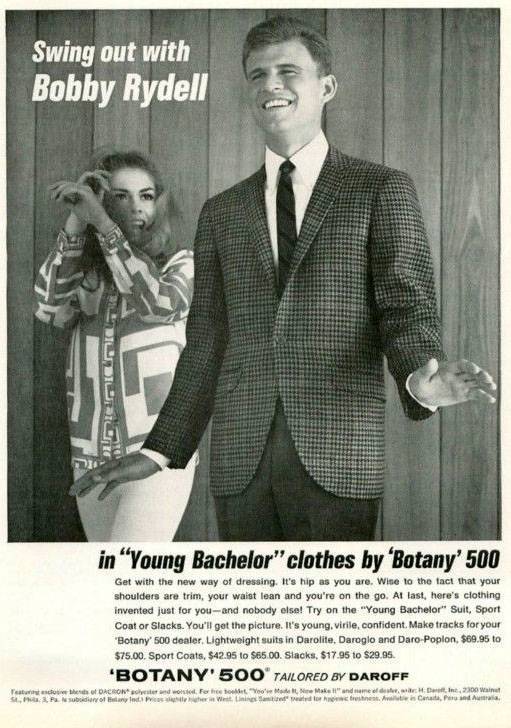 She looks absolutely scared to death.  It looks like Bobby was abusing her, got caught on camera and is saying, “It’s not what it looks like – We were just playing around.” 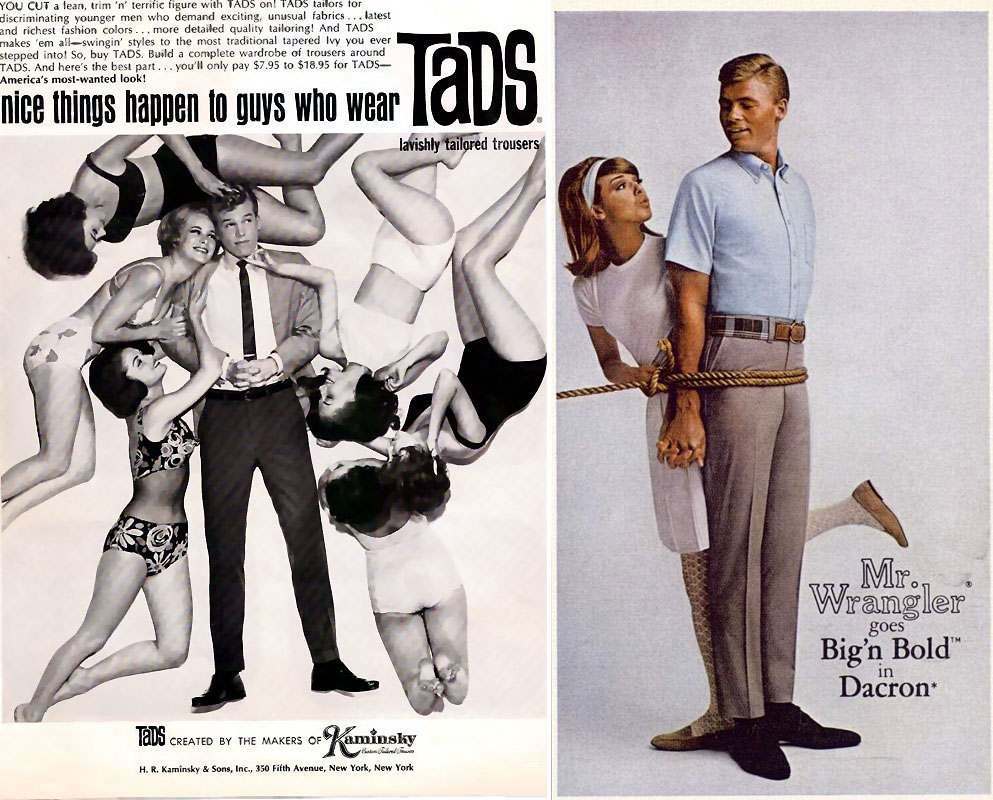 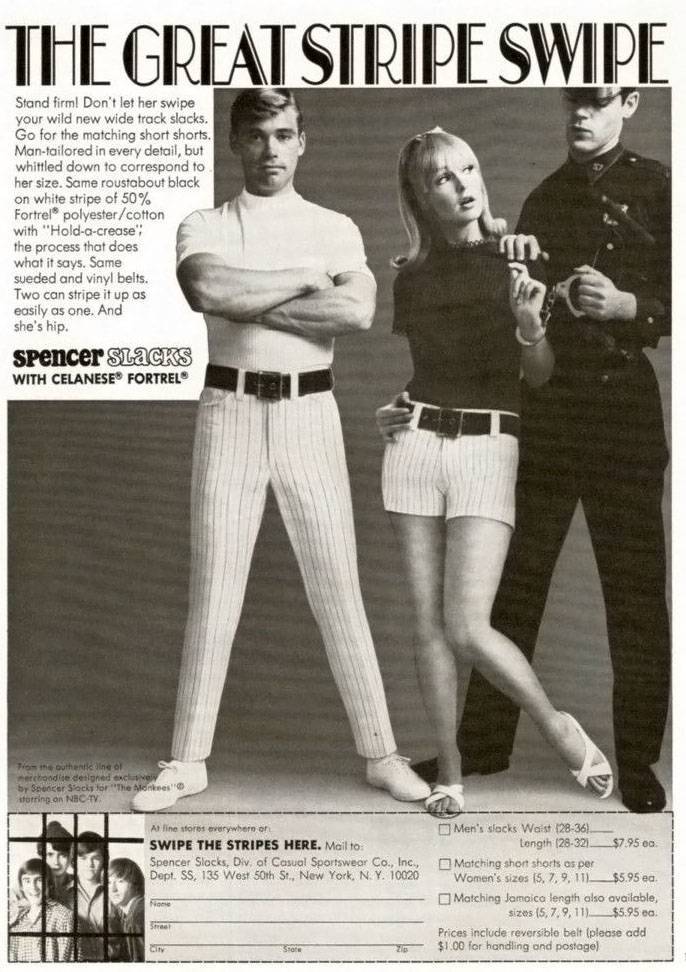 “From the authentic line of merchandise exclusively by Spencer Slacks for “the Monkees” starring on NBC-TV.”

When you slip into a pair of slacks like the ones worn by Peter Tork and Mike Nesmith, chicks will literally have to be handcuffed by law enforcement to keep them away from you.  Such is the power of Monkees slacks. 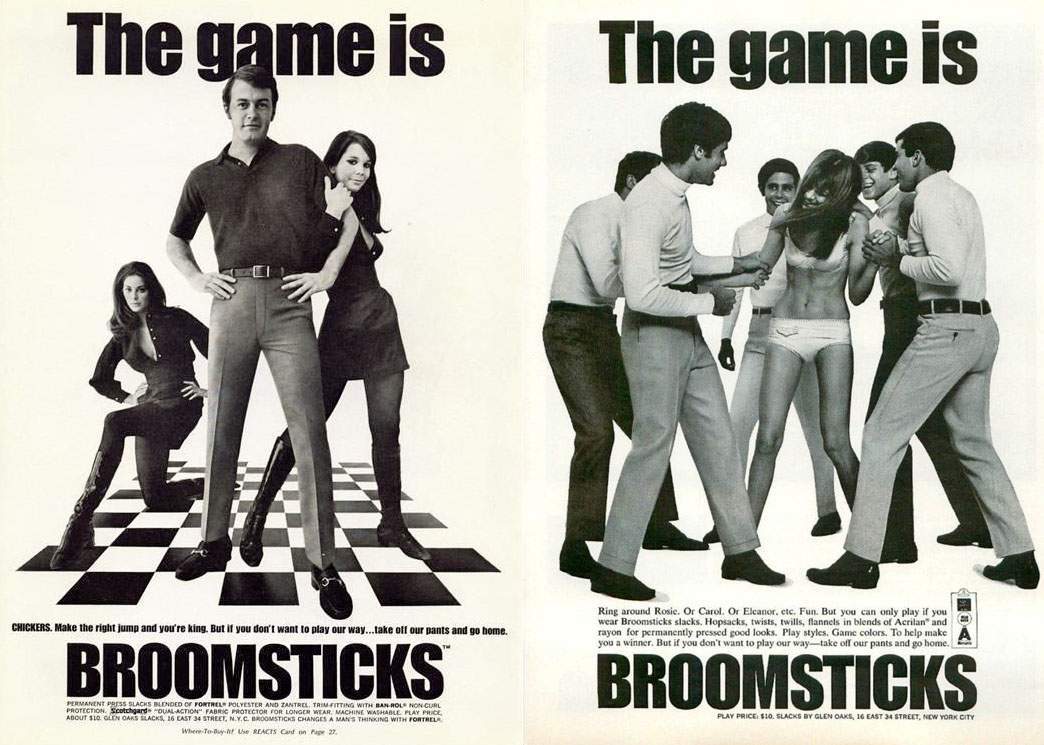 The Broomsticks slacks adverts were pretty racy for the time – always with the indication that sex was right around the corner. 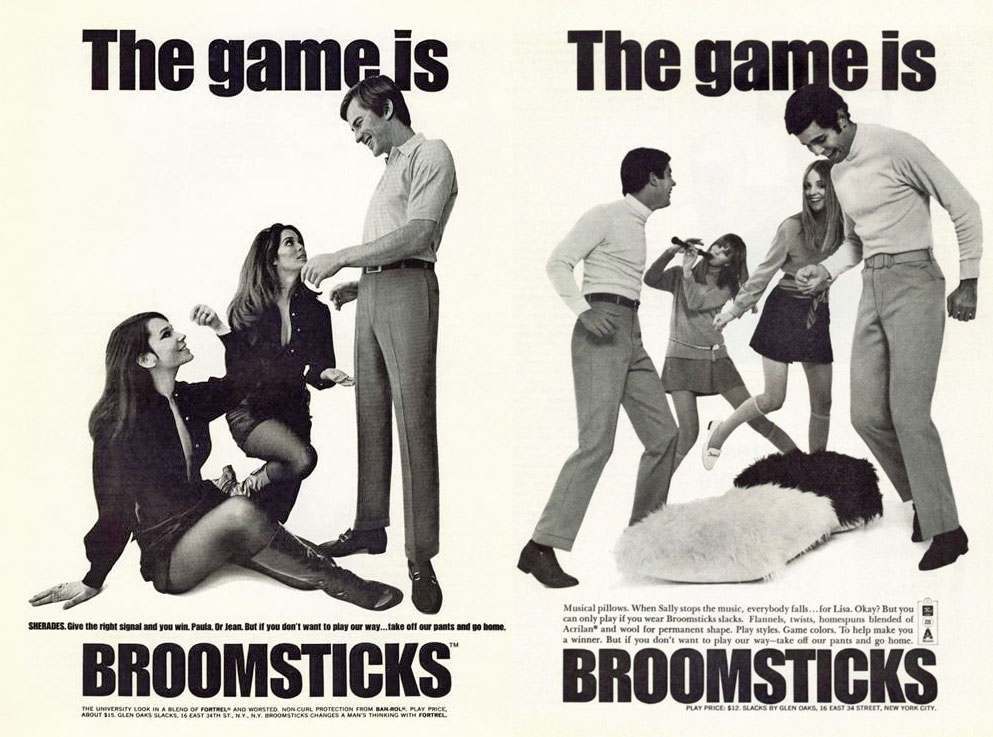 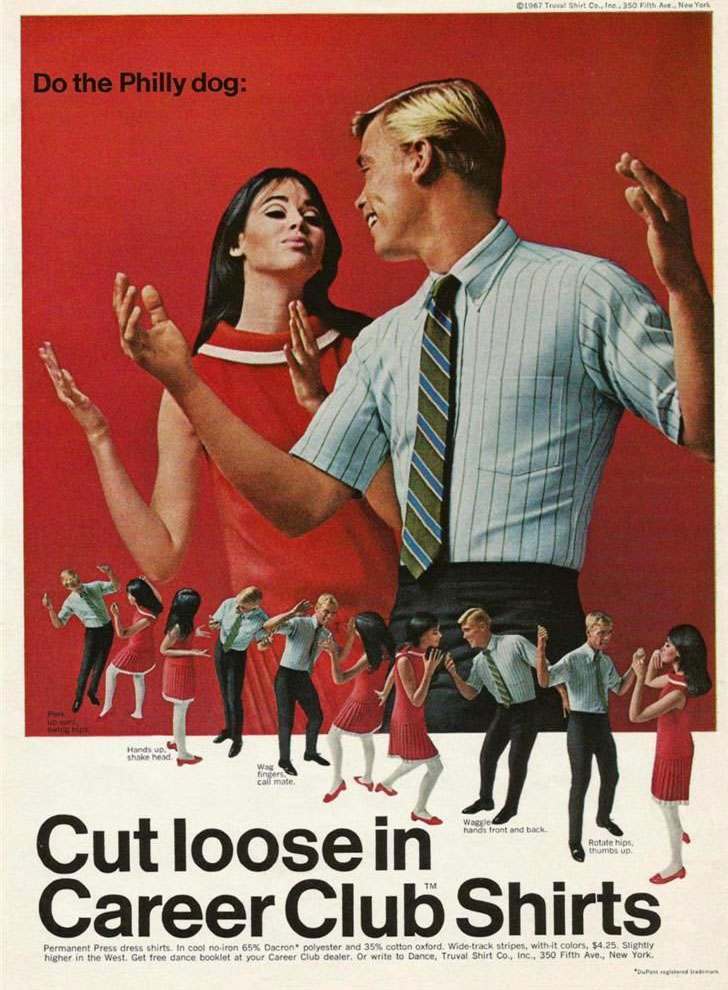 “Wag fingers, call mate…Waggle hands front and back…”   Literally, the worst dance of all time.  Besides “The Jellyfish“, of course. 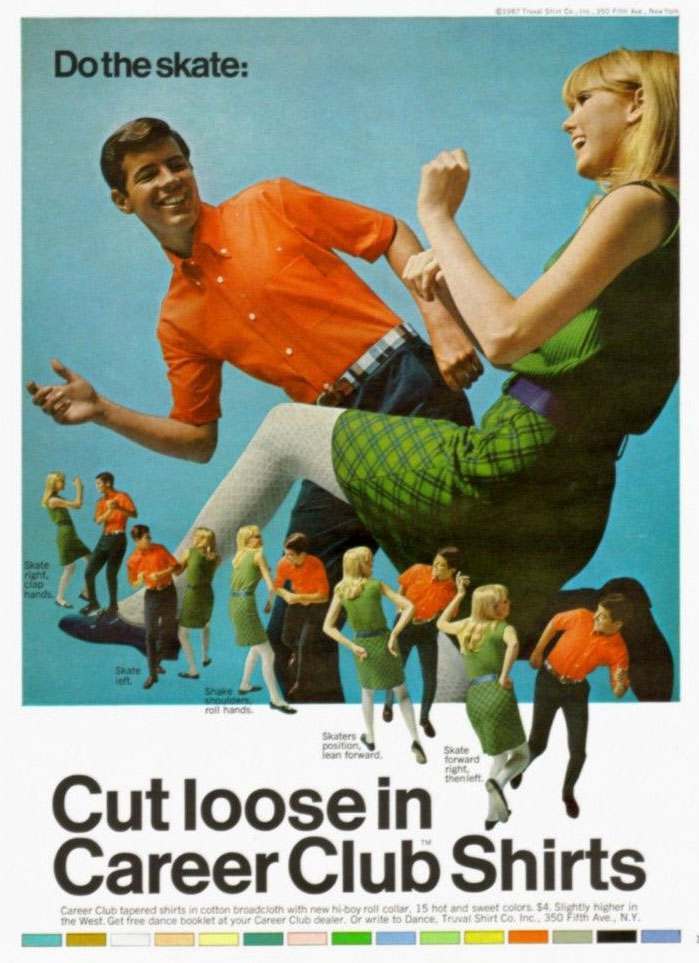 As awkward as “The Skate” appears, let’s be slow to judgement and not forget we live in an age of twerking. 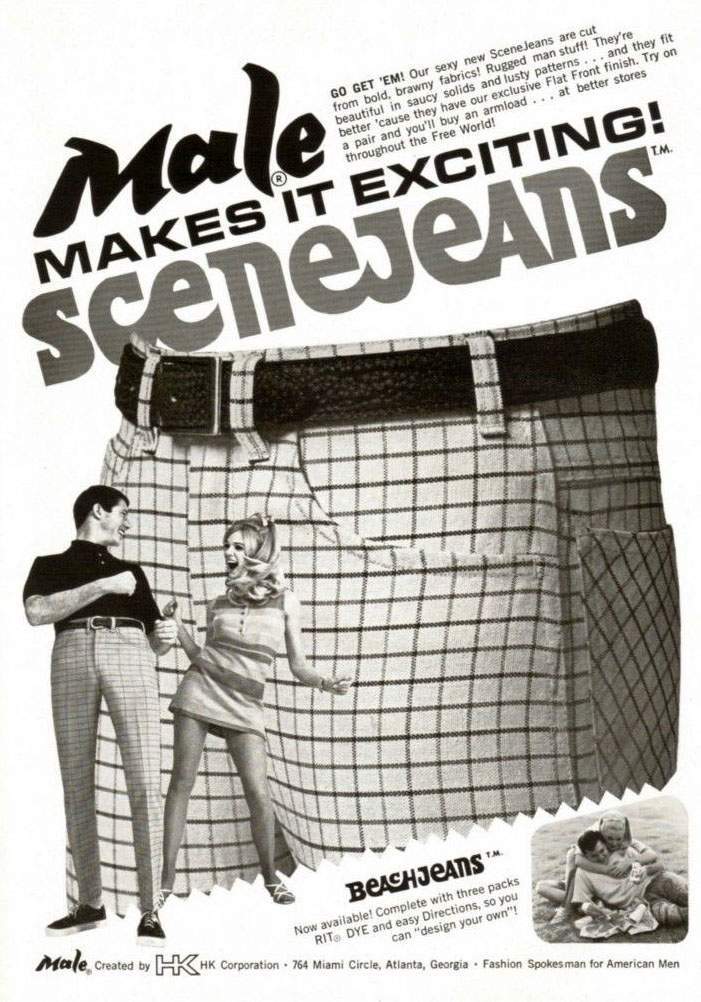 1968 – The year of striped high-waisted jeans and high hemlines for miniskirts.  Life was good. 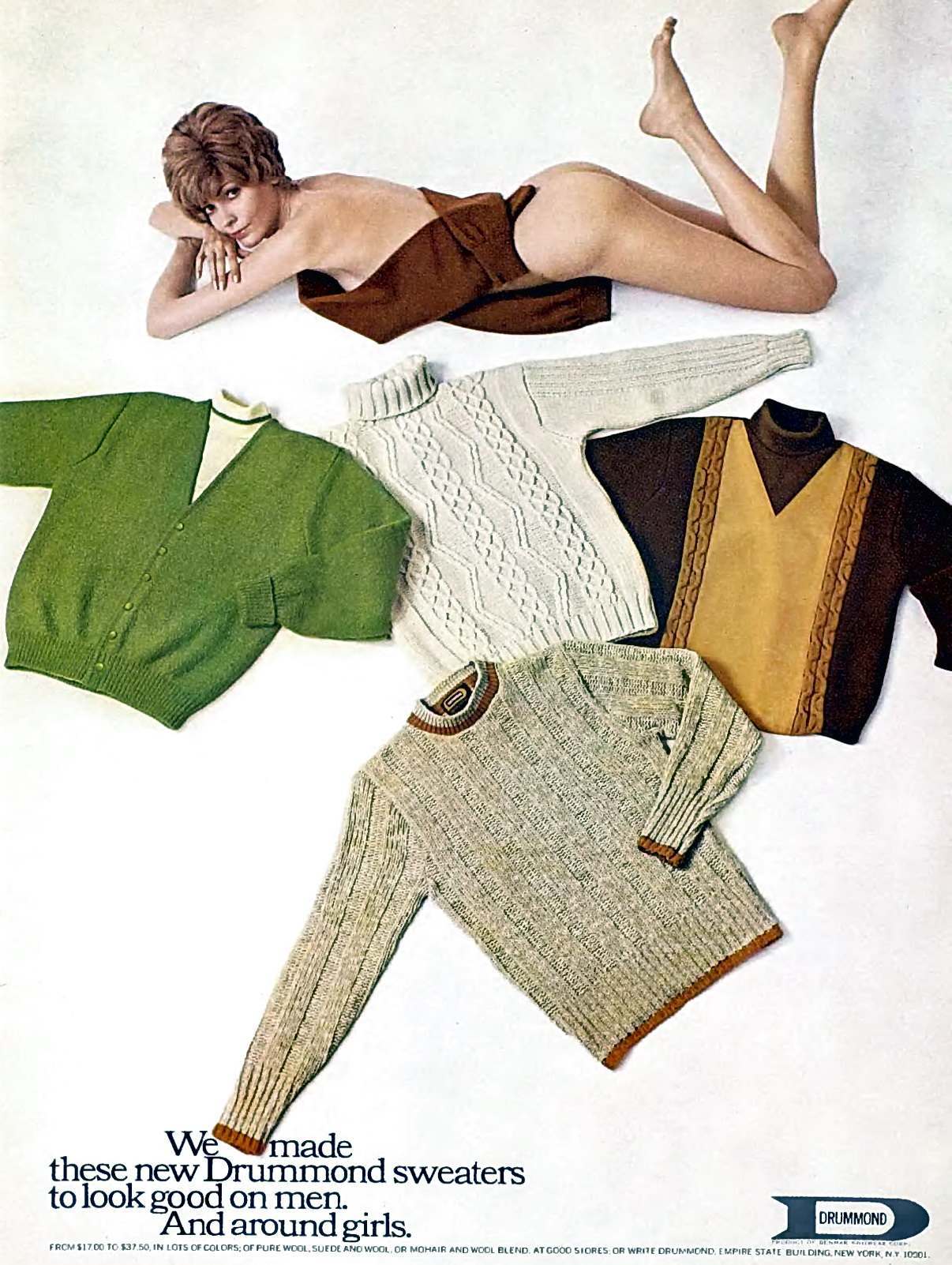 In the Swinging Sixties, even sweater adverts were sexy. 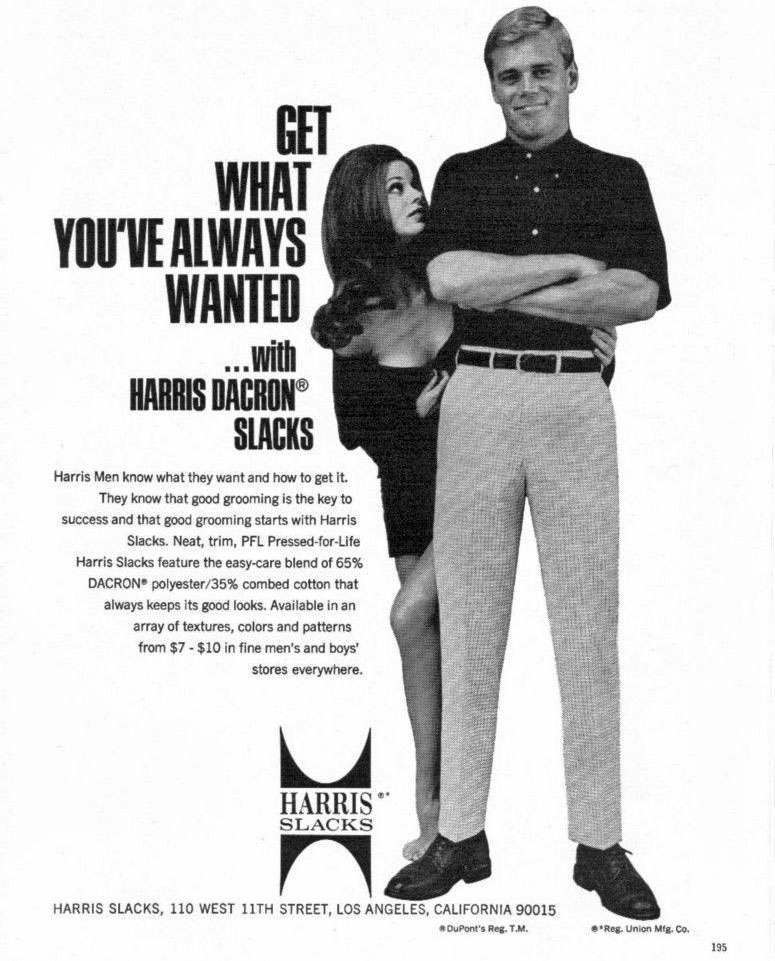 You might have noticed a slight trend in 1960s men’s clothing adverts – shirts, slacks, sweaters, suits are all nothing more than lady bait. 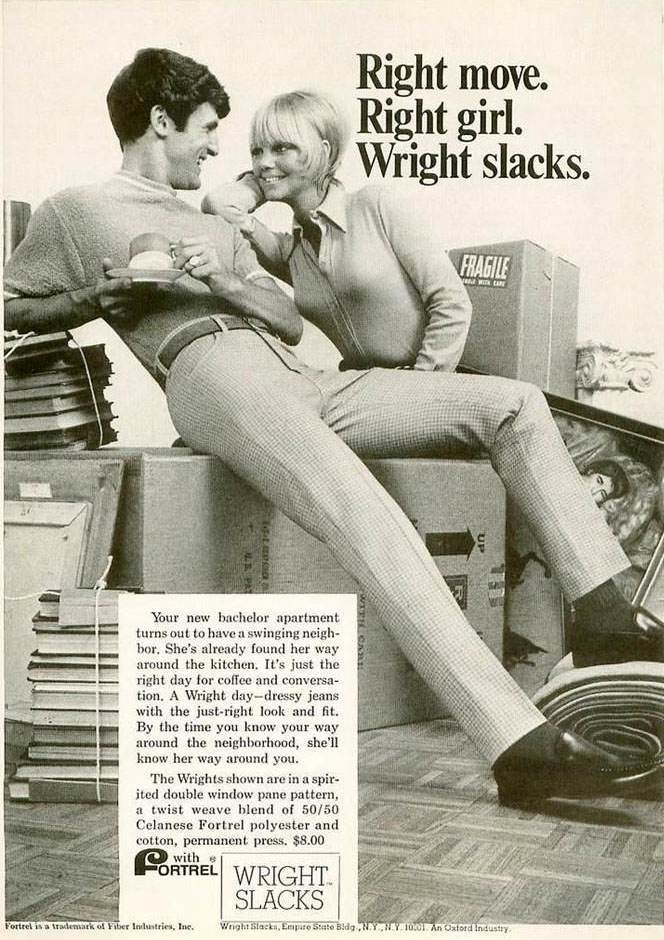 I’m pretty sure he’s spilling his coffee all over himself, but the bigger question is ‘what is that painting by his left leg’? 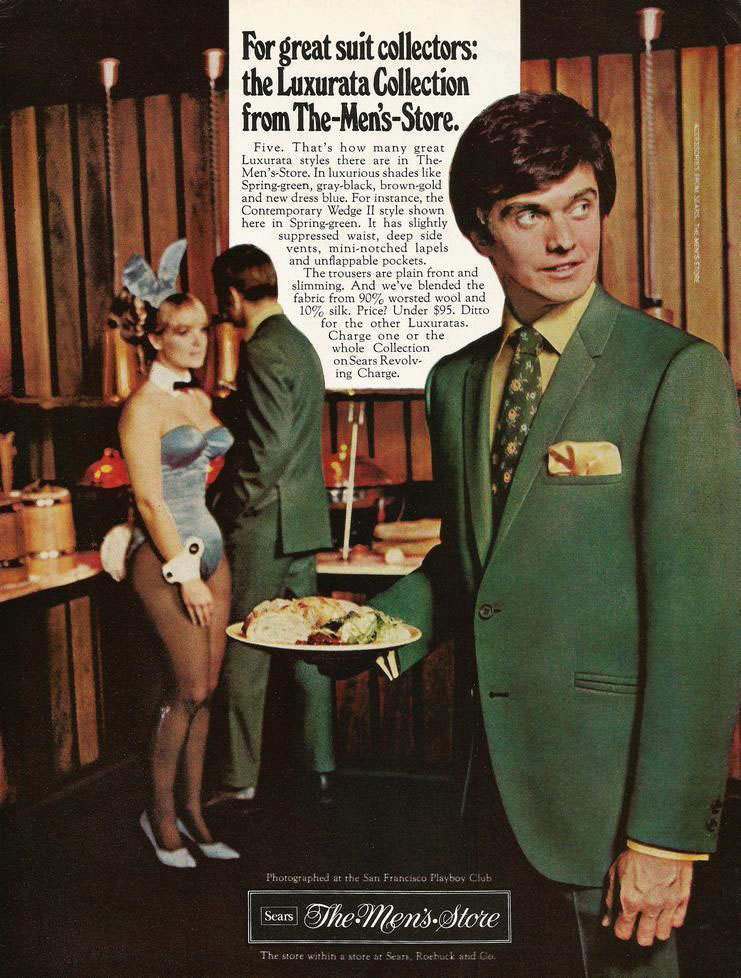 This isn’t the Sears I’m familiar with.  Playboy bunnies, “Luxurata” suits…. what happened, Sears?  You used to be so hip. 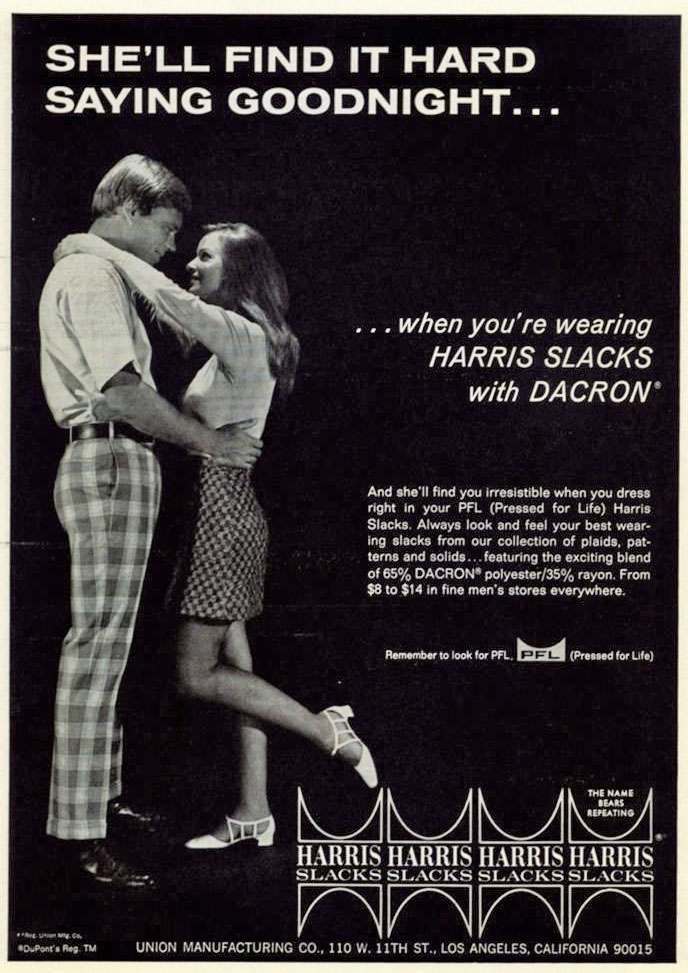 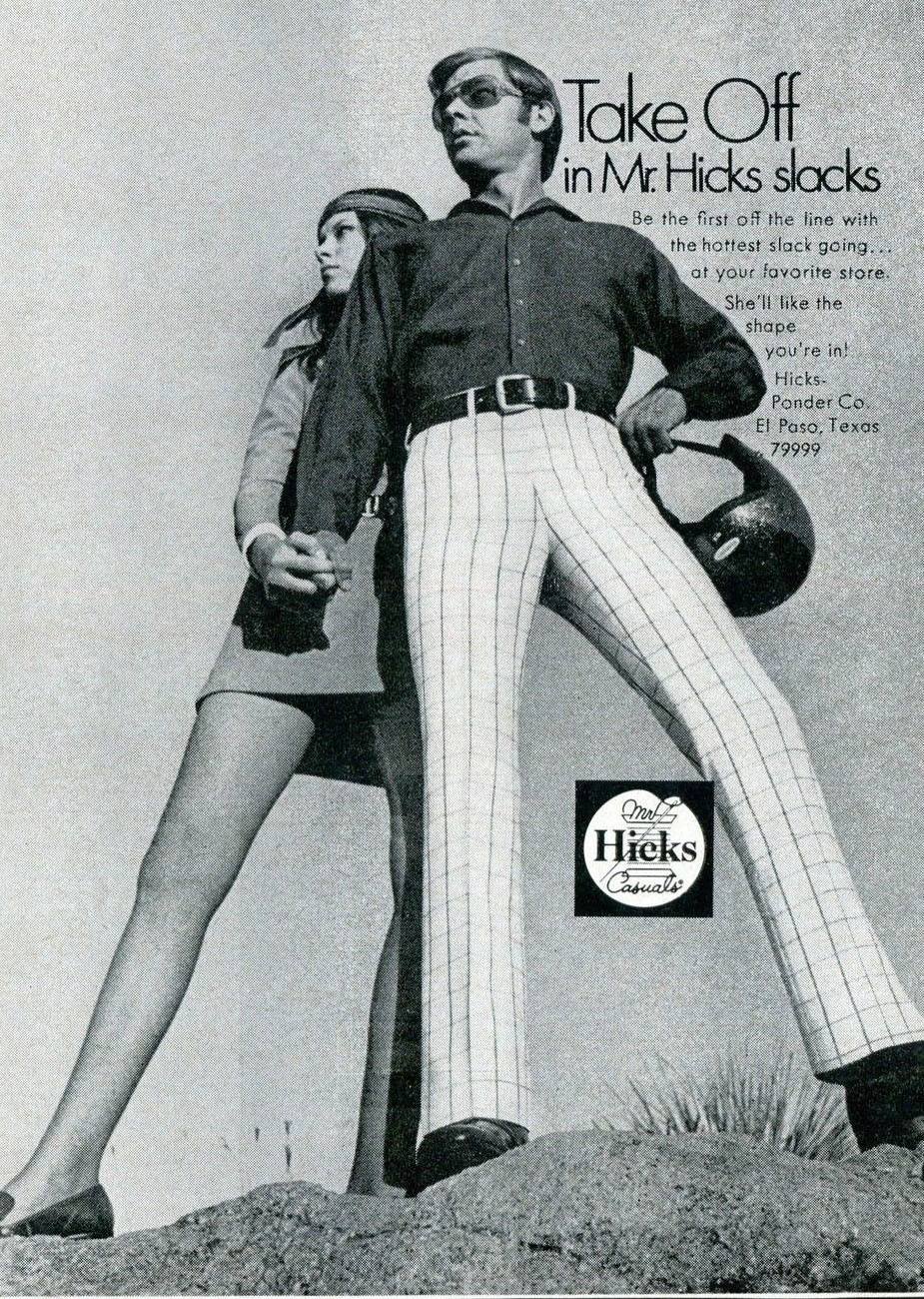 Yeah, he looks super cool, but won’t you don’t realize is that he rode up on a bicycle wearing that helmet. 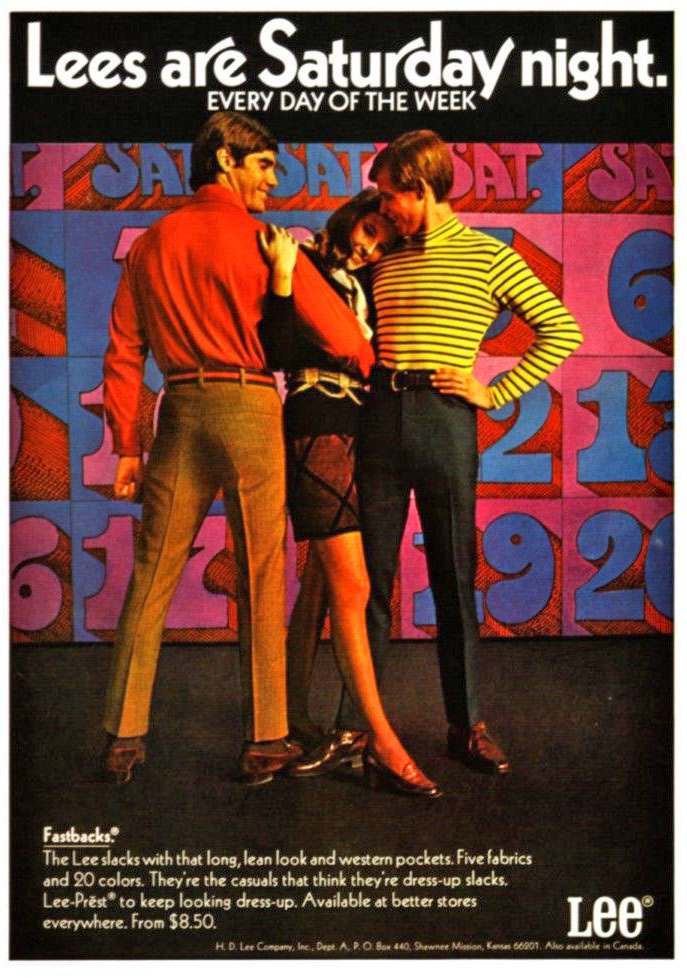 … and I guess we can presume that Saturday night’s are for threesomes. 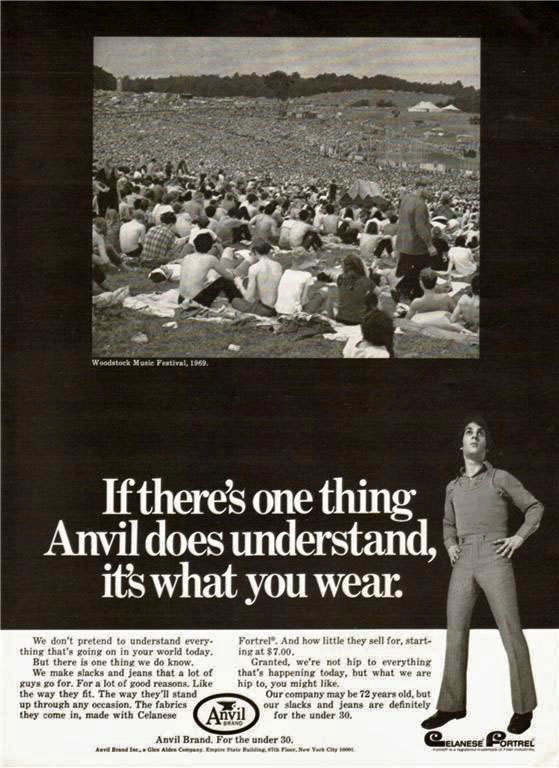 Ummmm…. I’m fairly certain there was not a single guy at Woodstock wearing Anvil slacks. 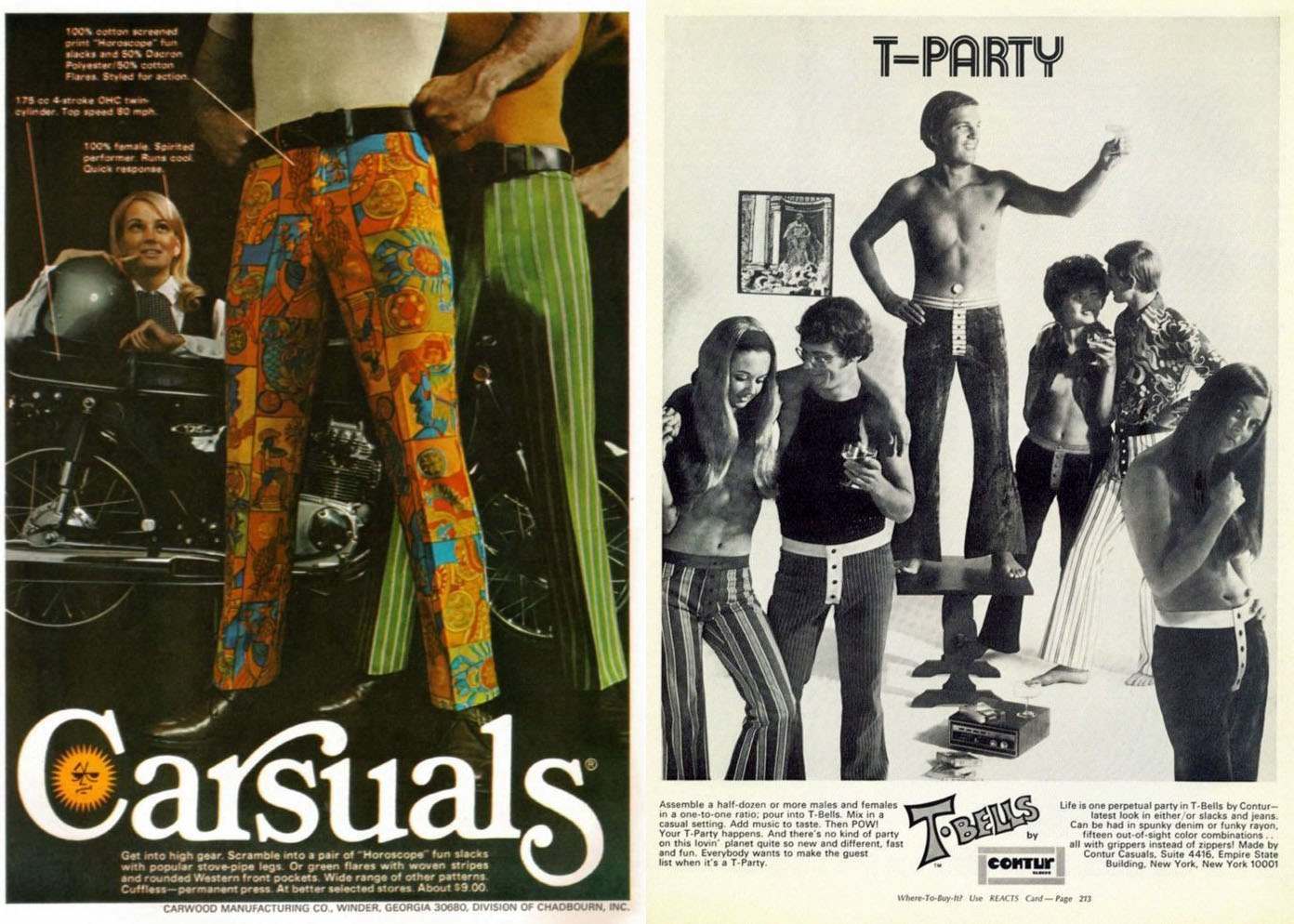 Looks like we’ve reached 1970, and as expected, things are just a touch tackier.