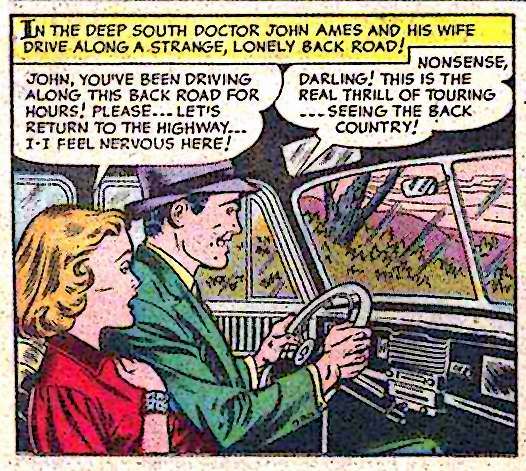 “John, You’ve been driving along this back road for hours! Please… let’s return to the highway… I-I feel nervous here!”
“Nonsense, Darling! This is the real thrill of touring… seeing the back country!”

John, you senseless idiot. You’re on a “strange lonely back road”, get your sorry ass back on the highway!

It’s fun to read these old horror comics knowing the rules of their world while the characters are blissfully unaware. In horror comics, the Golden Rules are: you should never dismiss superstitious legend, never take the back roads, and always believe your humble wife’s intuition. Otherwise, you’re dead meat….. just like ol’ John, blissfully oblivious to his impending doom. 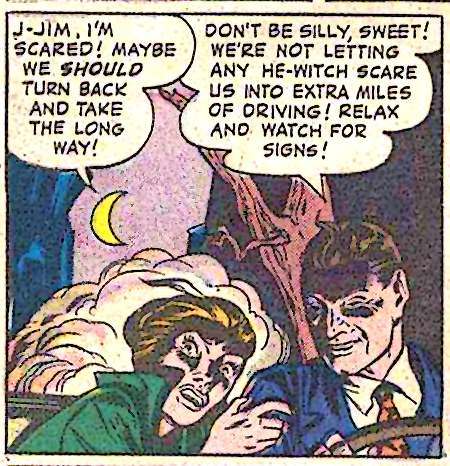 “J-Jim, I’m scared! Maybe we should turn back and take the long way!”
“Don’t be silly, sweet! We’re not letting any He-Witch scare us into extra miles of driving! Relax and watch for signs!”

Totally different comic – this time it’s Jim that’s the ignoramus. Horror comics were littered with dumb husbands who didn’t give two shits that their wives were petrified with terror.

“Don’t be silly, sweet.” Well, if your “sweet” was driving, you’d be safe and sound in a Holiday Inn. But nooooooo. You had to be stubborn and not let that “He-Witch” make you lose precious miles. As you can well imagine, things don’t turn out too well for Jim and Sweet. 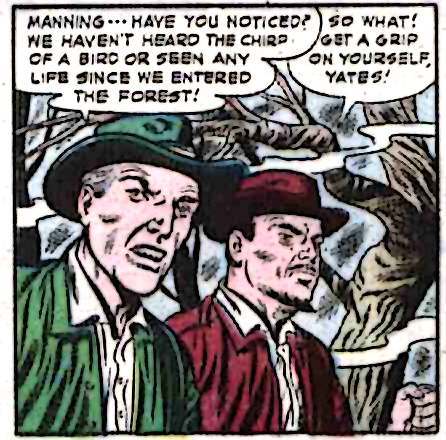 Yates points out that entire forest is empty, but Manning is too busy being a dick to care. Naturally, both Yates and Manning come to an untimely end. Skeptics and naysayers never last more than a few panels in old-school horror comics. 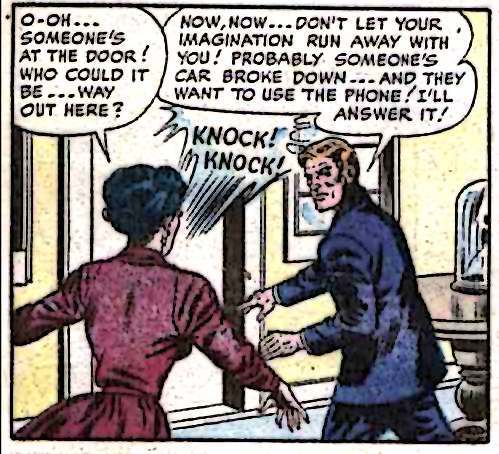 “O-Oh… Someone’s at the door! who could it be… way out here?”
“Now, now.. don’t let your imagination run away with you! Probably someone’s car broke down… and thy want to use the phone! I’ll answer it!”

Once again, the wife is exercising common sense, but her semi-retarded husband has absolutely no sense of self-preservation.  And why would he automatically assume it’s someone whose car has broken 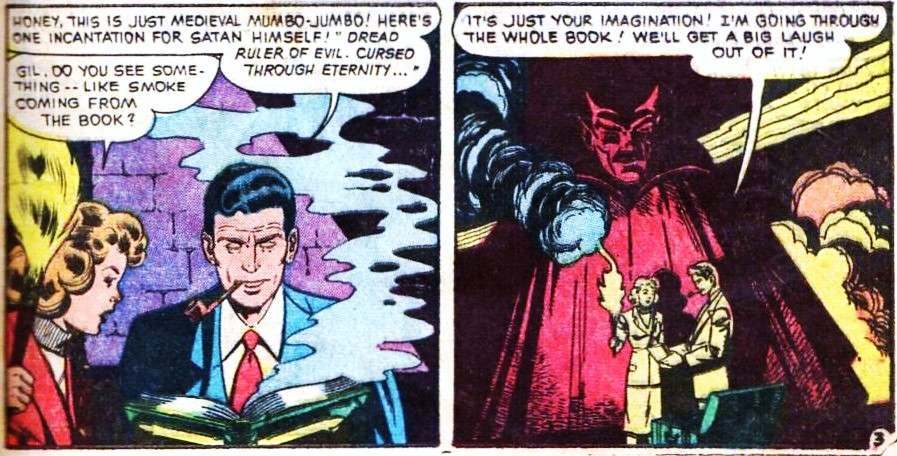 As Gil reads an incantation for Satan…

“Gil, do you see some smoke-thing…. like smoke coming from the book?”
“It’s just your imagination! I’m going through the whole book! We’ll get a big laugh out of it1”

I wouldn’t consider myself superstitious, but if I’m reading an ancient incantation to Satan and it starts smoking, I’m dropping the book and getting the hell out of Dodge. 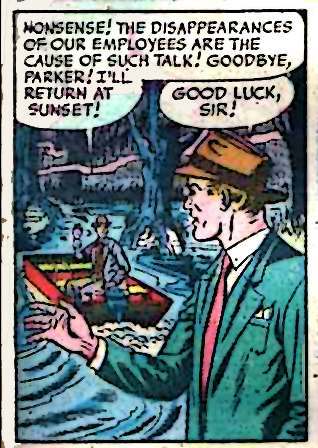 “Nonsense! The disappearances of our employees are the cause of such talk! I’ll return at sunset!” 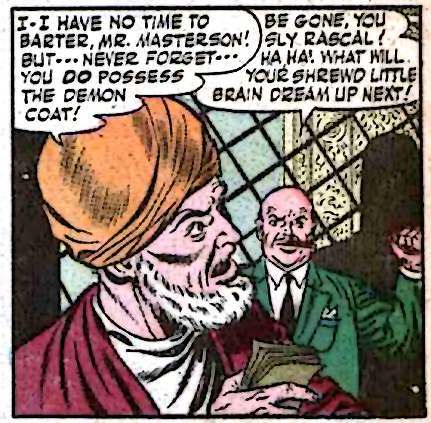 Actually, Mr. Masterson, I don’t think you heard the man in the turban.  He said you now have the DEMON coat – he didn’t say DENIM coat – he said DEMON.   No good will come of this. 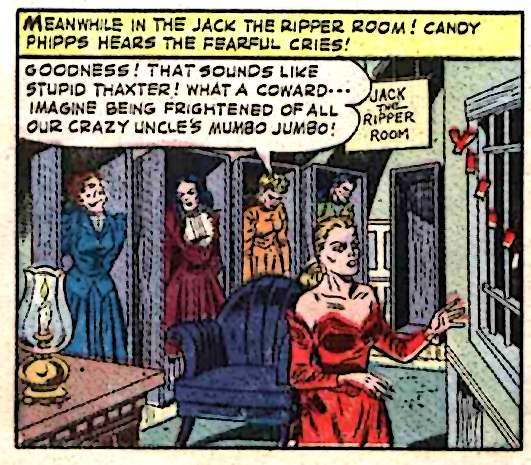 Meanwhile in the Jack the Ripper Room!  Candy Phipps hears the fearful cries!

“Goodness! That sounds like stupid Thaxter! What a coward… imagine being frightened of all our crazy uncle’s mumbo jumbo!”

These horror comics are almost teaching-aids for Darwin’s Theory of Natural Selection, where these idiots demonstrate self-removal from the gene pool via acts of extreme stupidity. 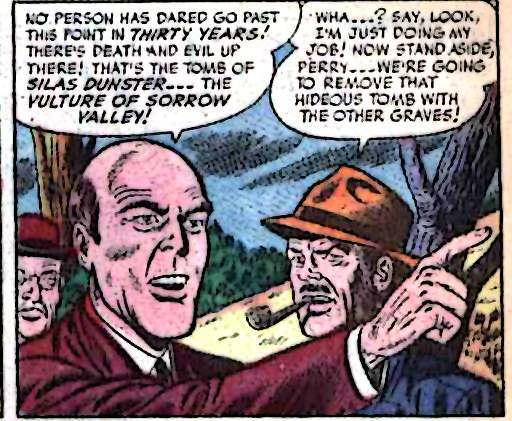 I think that pipe tobacco is stunting his ability to reason.  Perry is straight up telling you (1) no one has gone that way for thirty years, (2) there is death up there, (3) there is evil up there, and (4) someone called The Vulture of Sorrow Valley is buried there.  What part of this do you not understand?

And on a side-note – no one named Silas Dunster ever turned out good.  With a name like that, you’re pretty much guaranteed to turn out evil. 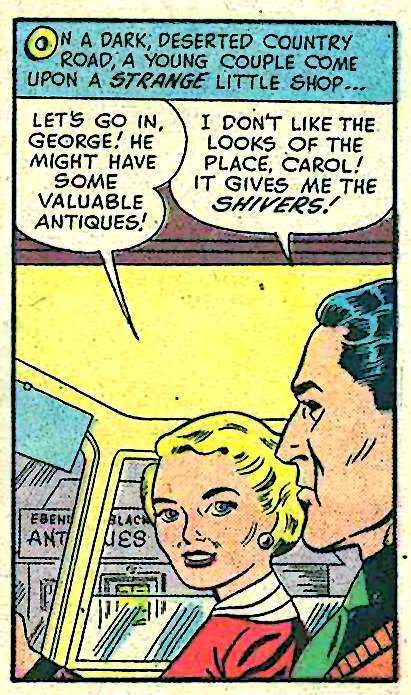 “Let’s go in, George! He might have some valuable antiques!”
“I don’t like the looks of the place, Carol!  It gives me the shivers!”

For once it’s the husband showing a little sense. It’s on a dark deserted road, the place is strange looking, and it gives George the shivers… get the f***ing hell out.  Go grab a beer and a hamburger, and that antique store will be a distant memory.

Unfortunately, we know they won’t do that (if they did, it’d be the most boring horror comic in history).  I hope at least they use good judgment when they buy stuff from the antique store….

Great Scott!  Are you kidding me? This is what they purchase?

It’s just like those horror movies where the camper has to go alone into the woods, or check out a strange sound in the basement, etc.  The audience knows they’re about to bite it, but there’s something morbidly fun about waiting for something really bad to happen. 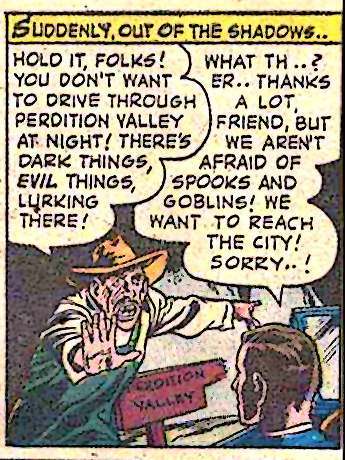 “Thanks a lot, friend, but we aren’t afraid of spooks and goblins! We want to reach the city!”

Take note of the sign labeled “Perdition Valley”.  Anyone like to take a bet whether he ever reaches that city? 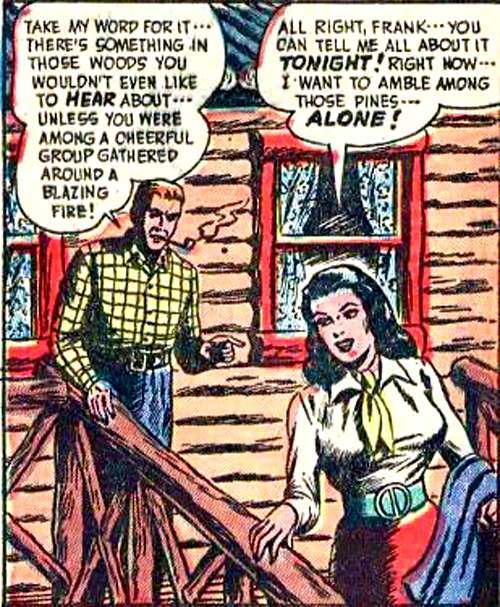 “All right, Frank… you can tell me all about it TONIGHT!  Right now… I want to amble among those pines… ALONE!

As appealing as ambling among the pines sounds, your husband has just warned you those woods spell death. My suggestion: take a rain check on the ambling.  Better yet, consider renting a cabin not located within woods haunted by an unspeakable evil. 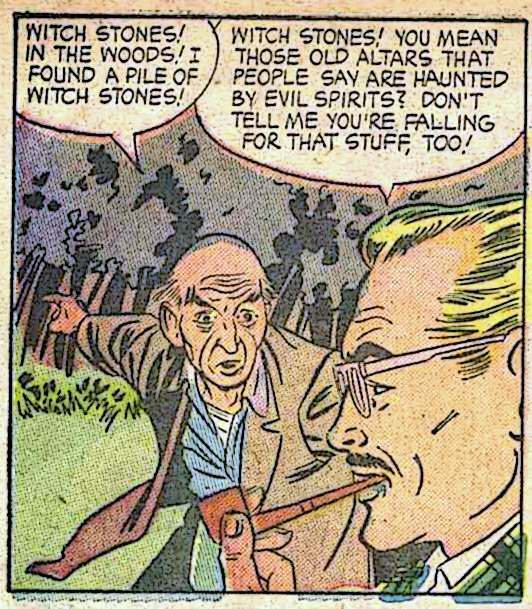 “Witch Stones! In the woods!  I found a pile of Witch Stones!”
“Witch Stones! You mean those old altars that people say are hunted by evil spirits?  Don’t tell me you’re falling for that stuff, too?”

Why is the condescending skeptic always smoking a pipe?  Discuss amongst yourselves. 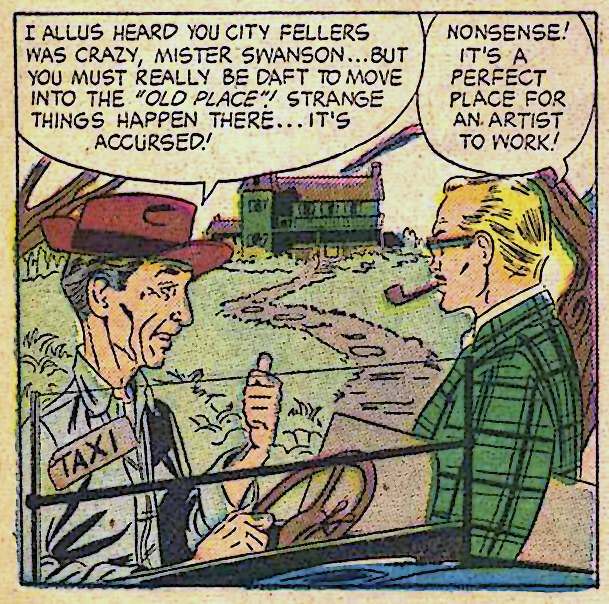 Here’s our loveable pipe-smoking Mister Swanson again. When you’ve been given fair warning by half the town and still don’t get the hint, according to the Rules of the Horror Comic, you can kiss your pipe-smoking ass goodbye. So long, Mr. Swanson.