THE BBC has always been a bit of a paradox. It has managed to be fusty and jumpy, as well as being subversive and weird. When most think of Auntie Beeb, we think of it has very proper and the voice of Middle England.

Of course, with that, came a willingness to ban certain songs. You can actually see the full list online of, if you’re an uber-nerd, you can see the files at the BBC’s Written Archives Centre in Caversham. 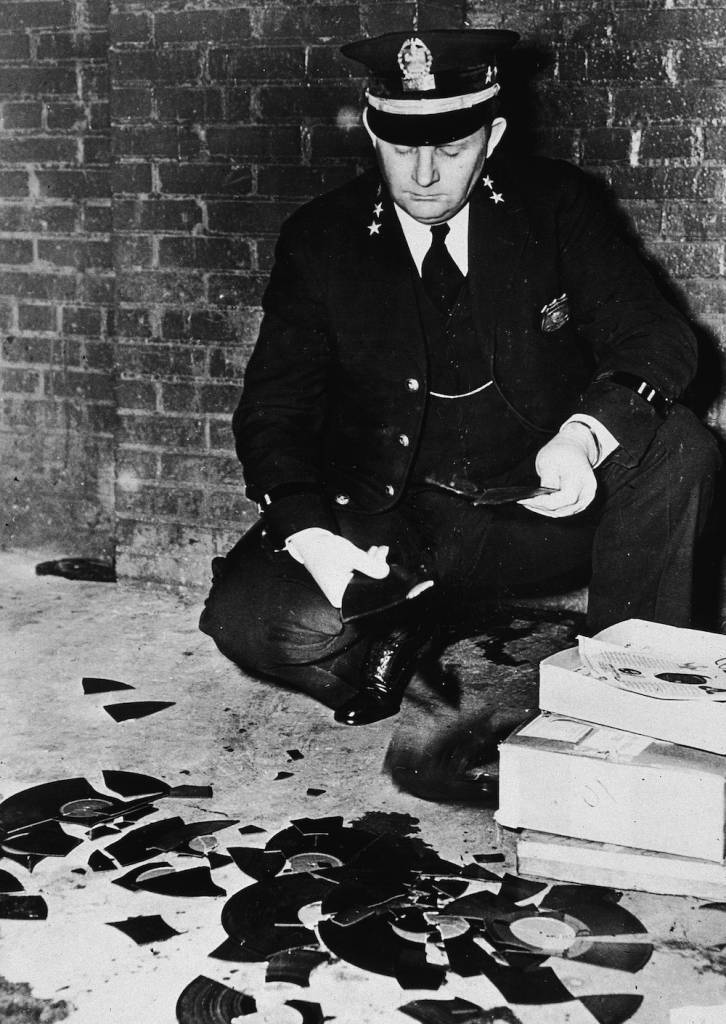 Policeman holds pieces of records that were branded obscene by the police department and smashed, Memphis, Tennessee, February 8, 1948. (Photo by Hulton Archive/Getty Images)

The original decency-makers were the wonderfully named ‘Dance Music Policy Committee’ which was set up in the 1930s and in their role as the guardians of British pop-culture, they once said: “We have recently adopted a policy of excluding sickly sentimentality which, particularly when sung by certain vocalists, can become nauseating and not at all in keeping with what we feel to be the need of the public in this country in the fourth year of war.”

Initially, the BBC wanted to ban songs that were “slushy in sentiment” or “pop” versions of classical music pieces. That grew into tutting at dirty language in songs, explicit sexual content, drug references and, of course, anything that might be deemed politically sensitive.

The theme from ‘The Man with the Golden Arm’ managed to get banned, despite being a perfectly innocent instrumental, but the BBC were so jumpy that they censored it because the film it was from was about drugs.

In the ’70s, Mary Whitehouse tried to get songs banned all over the shop and, unfathomably, she failed in her quest to get Chuck Berry’s ‘My Ding-a-Ling’ banned, but succeeded with Alice Cooper’s pretty timid ‘School’s Out’. In the ’80s, Mike Read famously refused to play Frankie Goes to Hollywood’s ‘Relax’ because it was “overtly obscene”, which of course, helped the song to become even more popular.

So with that, lets look at some of the great and interesting songs that the BBC has banned, in their infinite wisdom.

Norman Long ‘We Can’t Let You Broadcast That’

In 1932, Norman Long recorded ‘We Can’t Let You Broadcast That’, which was an attack on records being banned by the BBC. The Beeb took great pleasure in banning it, of course. Eventually, it did get aired on the BBC, with the mighty John Peel giving it airtime.

We all know about ‘Ebeneezer Goode’ by The Shamen getting banned by Auntie, thanks to drug references, but around the late ’80s/early ’90s, there were loads of songs getting banned for referring to drugs. The best of the bunch is the mighty D-Mob smash.

Laine’s song was banned by the BBC as they saw it as “a sentimental mockery of Christian prayer”. Laine sings: “Answer me, Lord above, just what sin have I been guilty of? Tell me how I came to lose my love, please answer me, O Lord.” Seems pretty innocent in 2014, eh?

Noël Coward ‘Don’t Let’s Be Beastly to the Germans’

The BBC always had problems with satire. Coward’s ‘Don’t Let’s Be Beastly to the Germans’ was problematic for Auntie and they said this of it: “It is just on the cards that casual or slow-in-the-uptake listeners may take the song literally and want indignantly to know why the BBC allowed Coward to advocate such excessive kindliness towards the Germans.”

Bob Dylan’s first ban came in 1962 with ‘Baby, Let Me Follow You Down’, for the simple reason that it contained the phrase, “God-almighty world”. The committee weren’t having that.

George Formby ‘With My Little Stick of Blackpool Rock’

The BBC got in touch with Formby and told him that his bawdy song was fine and all, but certain lines were not suitable for broadcast. They may as well have stuck a Parental Advisory sticker on him.

‘Glad to Be Gay’ is one of the most important British records ever recorded, but the BBC felt it was too controversial to be played on their stations. Of course, despite the ban, John Peel played it on his show. Elsewhere, on the rival Capital Radio, the song reached the top of the listener-voted Hitline chart for six consecutive weeks.

Kitty Wells ‘It Wasn’t God Who Made Honky Tonk Angels’

Kitty Wells’ hit was banned all over the world, because men don’t like it when women call bullshit on them. Wells chided married men who “think they’re still single” while the wives ran the home. The BBC managed to ban one of the most brilliant and enduring feminist anthems ever written, and all subsequent cover versions.

The wonderful melodrama of Scott Walker’s ‘Jackie’ was banned from being on-air for the line about “authentic queers and phony virgins”, not to mention a number of drug references. On the non-BBC show, Frankie Howerd’s ‘Howerd’s Hour’, the song got a public appearance which saw Walker comically dancing during the performance. Take that BBC.

The Shangri Las ‘Leader of the Pack’

One of the most famous ‘death records’ ever recorded, The Shangs’ ‘Leader of the Pack’ was banned by the Beeb for the morbid subject matter. It is also thought that it was shelved because the BBC didn’t want to encourage fighting between mods and rockers. It charted in Britain for a third time in 1972, by which time, the BBC had finally lifted their ban.

The Smoke ‘My Friend Jack’

From the opening line of ‘my friend Jack eats sugar lumps…’, the BBC had cottoned on to the fact that LSD was mainly administered via cubes of sugar, so The Smoke’s reference didn’t stand a chance with the committee. You suspect that, at the time of pirate radio stations, The Smoke positively thrilled in being banned by ‘the man’.

The Moontrekkers ‘Night of the Vampire’

Joe Meek’s incredibly creeped out ‘Night of the Vampire’ was considered so frightening by the BBC, that they banned it for fear of the entire country having nightmares. Even in 2014, it does give you the willies. Terrific record made by a madman obsessed by the occult. Tremendous.

‘Love Is A Battlefield’, ‘Livin’ On The Frontline’, ‘Bang Bang’ and Massive Attack were all censored by the BBC during the Gulf War and Falklands War. Split Enz ‘Six Months in a Leaky Boat’ would probably pass most listeners by, but the jumpy BBC thought they couldn’t have anyone thinking that they were mocking anyone serving in the Navy.

When Hawkwind released this song, the IRA were bombing the shit out of London and the BBC didn’t want any records making reference to anything that might be seen as encouragement. Even the band’s management withdrew the single. The song was actually a satirical comment on the whole thing, and members of the band said: “It was stupid to withdraw it, they were paranoid they’d get bombed. I thought that record was what everything was about in the 1970s.”