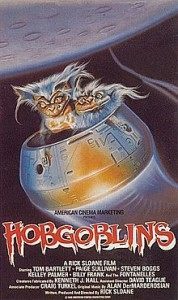 Although visual special effects, make-up and prosthetics improved substantially in the 1980s, not all monster make-ups or concepts were created equal during the decade of the slasher film.  Although the killer bunnies and frogs of 1970s horror films were long gone by the time of the Reagan Administration, new (and sometimes lame) monsters rose to take their place of dishonor.

Here are my selections for the worst monsters of 1980s horror cinema:

Michael Mann’s The Keep is a remarkably hypnotic and mesmerizing film. The visuals are dazzling and dreamy, the score by Tangerine Dream is atmospheric, and the entire movie feels like a weird phantasm.  The Keep is practically trance-like in its pacing and movement.

And then, at the end of this mini-masterpiece of a horror film, out steps a giant rubber monster with over-sized, fake muscles and glowing red eyes…called Molasar.

The truth is that there may indeed be worse monsters in the horror films of the 1980s.  But few of them so successfully managed to puncture a movie’s carefully-erected atmosphere of dread and dark beauty.

The Keep is still the best film on this list, by–the-way — rubbery monster or no — but Molasar’s inferior costume really looks awful, especially in comparison with film’s great, timeless qualities. 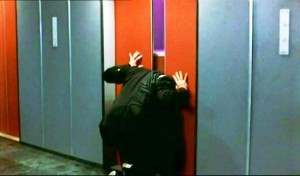 Yes, you read that right. An evil, intelligent elevator in The Lift suffocates four riders during a lightning strike, and a blind man falls down the elevator shaft to his doom.

The secret behind the evil elevator is a micro-chip (produced by a Japanese tech company), an organic micro-chip.  That means that this sick elevator is technically “alive,” and therefore qualifies as a monster.

The problem of course, in terms of thrills and believability, is that if you want to avoid this particular monster there’s a simple way to do so, besides (for god’s sake…) taking the stairs.

Just don’t go in the elevator.

In fact, don’t go in the building at all.

A terrible monster, by definition, is one you can easily evade.  A sick, sentient elevator fits the bill. 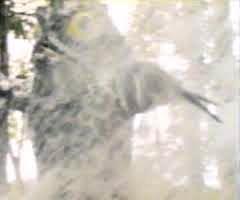 This low-budget film was made in the late 1970s, but not released, apparently, until the mid-1980s, so it sort of/kind of qualifies for this list.

In Bog, a monster composed of entirely cancer cells is awakened near Bog Lake after a fisherman drops dynamite in the body of water.

The monster that emerges is a shaggy insect-like thing with crab hands and big fat, inexpressive eyes.

And it wouldn’t pass muster at a second-graders Halloween party. 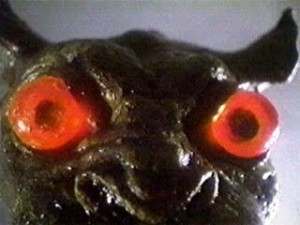 The oft-unseen monster in this horror film is the non-corporeal spirit of an executed serial killer, William John Brown.  During the course of The Stay Awake, this spirit infiltrates St. Mary’s School for Girls and spends an inordinate amount of time hiding behind a potted plant in one school corridor.

There he vexes the facility’s janitor with his foul odor, described by the custodian as the “ass end of a cow.”  Later, the creature’s presence is detected again by his foul stench and the students have to ask “Where’s that awful smell coming from?”

So basically we’ve got a stinky spirit, living in a plant, essentially, and calling itself, rather grandiosely, the Angel of Darkness.

When we finally see the demon, it more closely resembles a Tarsier than a terrifying hell-spawn. 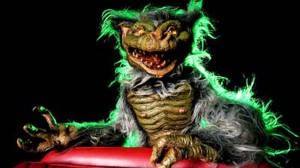 Immortalized by Mystery Science Theater 3000, Hobgoblins is one of the seemingly innumerable Gremlins (1984) knock-offs of the 1980s, titles that included Ghoulies, Troll and Critters.

The bad or derivative designs may be forgiven, but the monsters never seem authentically alive — let alone ambulatory — and therefore lack the ability to create a sense of menace.