Exciting news: Elizabeth Hamey, who signs her work ‘Refna’, has granted me access to her amazing archive of work at the cross-hatches of art, design and fashion in the 1960s and 70s. 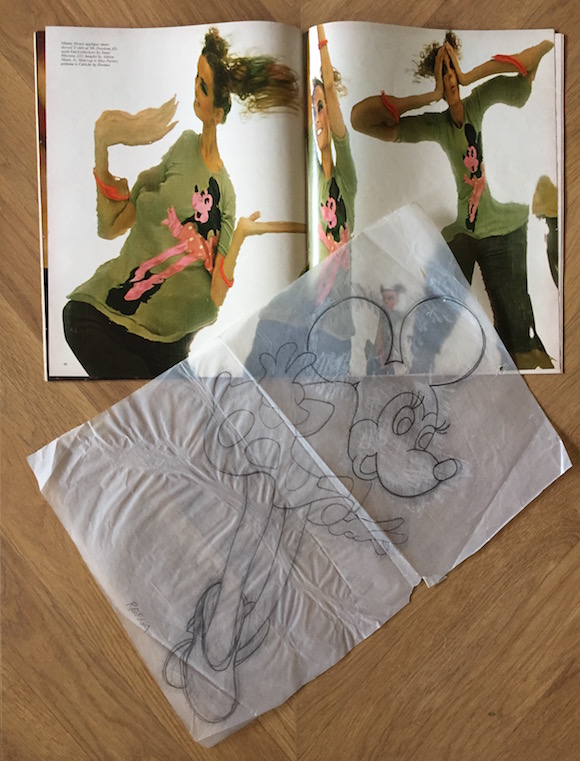 Brochure for Through The Looking Glass fashion show in Cambridge, 1968 © Refna

Elizabeth Hamey modelling for Kleptomania with her friend Roger, 1968 © Refna

Hamey studied drawing and illustration at the art school in her hometown of Cambridge (and later fine art at Kingston art school in Surrey).

Running market stalls in London’s Portobello Road and Chelsea Antiques Market as well as in Cambridge, she designed ranges of clothing, including kaftans made from Indian bed spreads and, for the May Balls in the university town, a collection of flamboyant shirts which were modelled by friends such as the photographer Mick Rock. One was worn by Jimmy Page onstage during The Yardbirds’ first tour of the US in 1966.

May Ball shirt worn onstage by Jimmy Page on The Yardbirds’ US tour, 1966 © Refna.

Page introduced Hamey to the late design entrepreneur Tommy Roberts, who drafted her in to design garments for his store Kleptomania; among Hamey’s creations was the gigot-sleeved Kleptomania mini-dress worn by Sharon Tate at her London wedding to Roman Polanski in 1968.

Illustrations for designs for Kleptomania, 1968 © Refna

Illustrations for designs for Kleptomania, 1968© Refna. No reproduction without permission

When Roberts launched Mr Freedom with Trevor Myles at 430 Kings Road in 1969, Hamey was on hand to produce appliqués for the jersey tops and dresses which became staple garments at the influential pop-art boutique.

Working with a team of machinists, Hamey also designed for one-off commissions from celebrity clients such as Elton John and Richard Burton and Elizabeth Taylor, who received his-and-her’s matching singlets with appliqué portraits of each other.

Artwork replicating Titian’s The Venus Of Urbino for an appliqué for Elton John, 1971.

The Richard Burton portrait for the singlet to be worn by Liz Taylor, 1970 © Refna

Burton showed his gratitude for the appliqué-d tops by presenting Hamey with this signed photograph.

Hamey even produced satin codpieces for Mick Jagger.  “I was too embarrassed to deliver them so sent a male friend in case I had to do a fitting!” she laughs.

Mr Freedom was but one of Hamey’s customers; she also designed for Paul Reeves’ Fulham outlet The Universal Witness and his former partner John Lloyd’s King’s Road boutique Alkasura as well as fashion shops in Cambridge and accounts in New York and Canada.

Based in Gloucestershire these days, Hamey has latterly been artist-in-residence at Cirencester Park Polo Club and focuses on depictions of  animals, particularly horses. Her work has appeared in the Royal Academy.