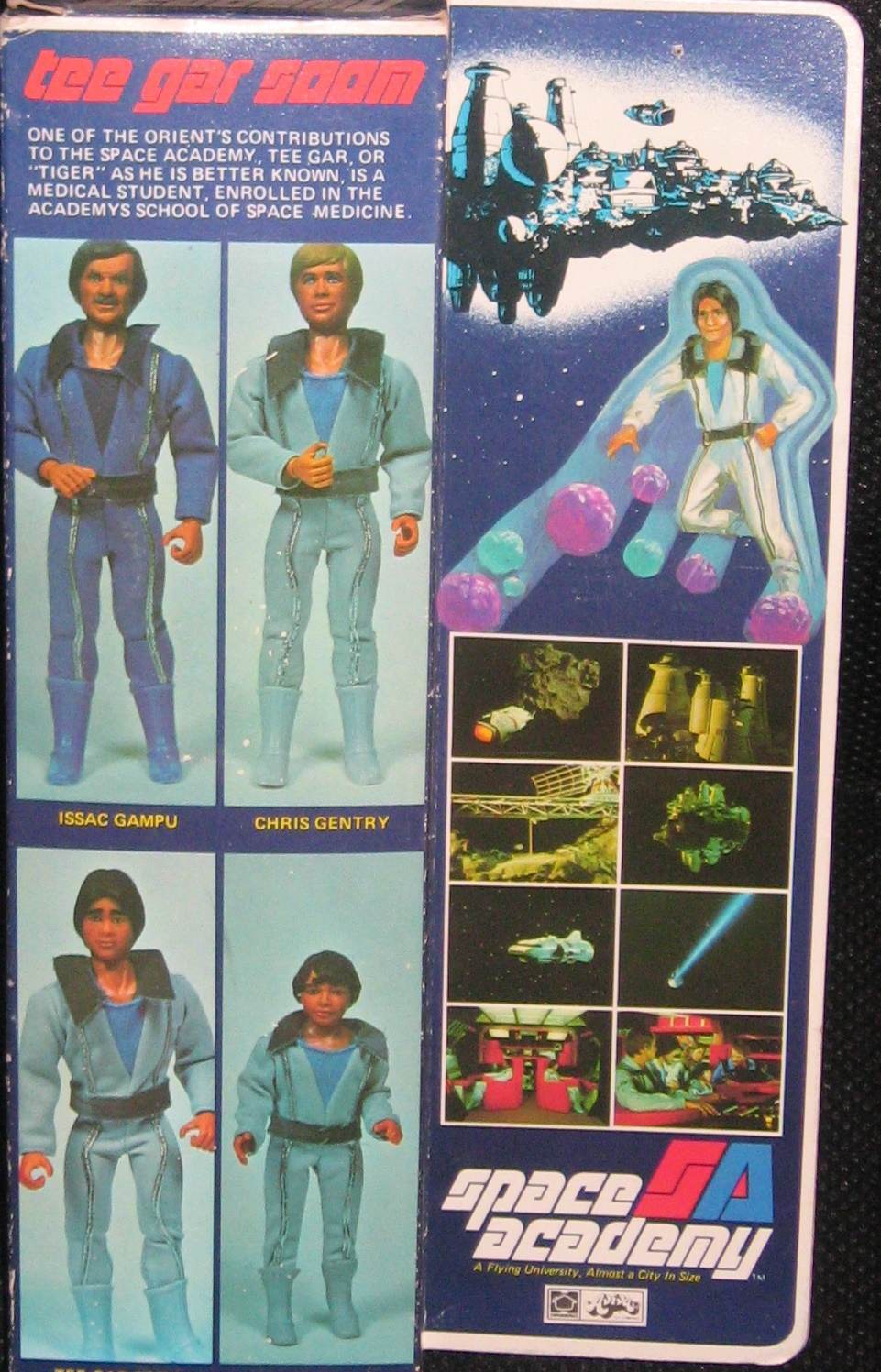 Yet some toy companies found themselves bereft of these lucrative licenses and endeavored instead to manufacture alternatives to these hit toys.

The results were often odd, bizarre even, but also, in the final analysis, unforgettable. Here are a few of those great but strange toys from the disco decade. 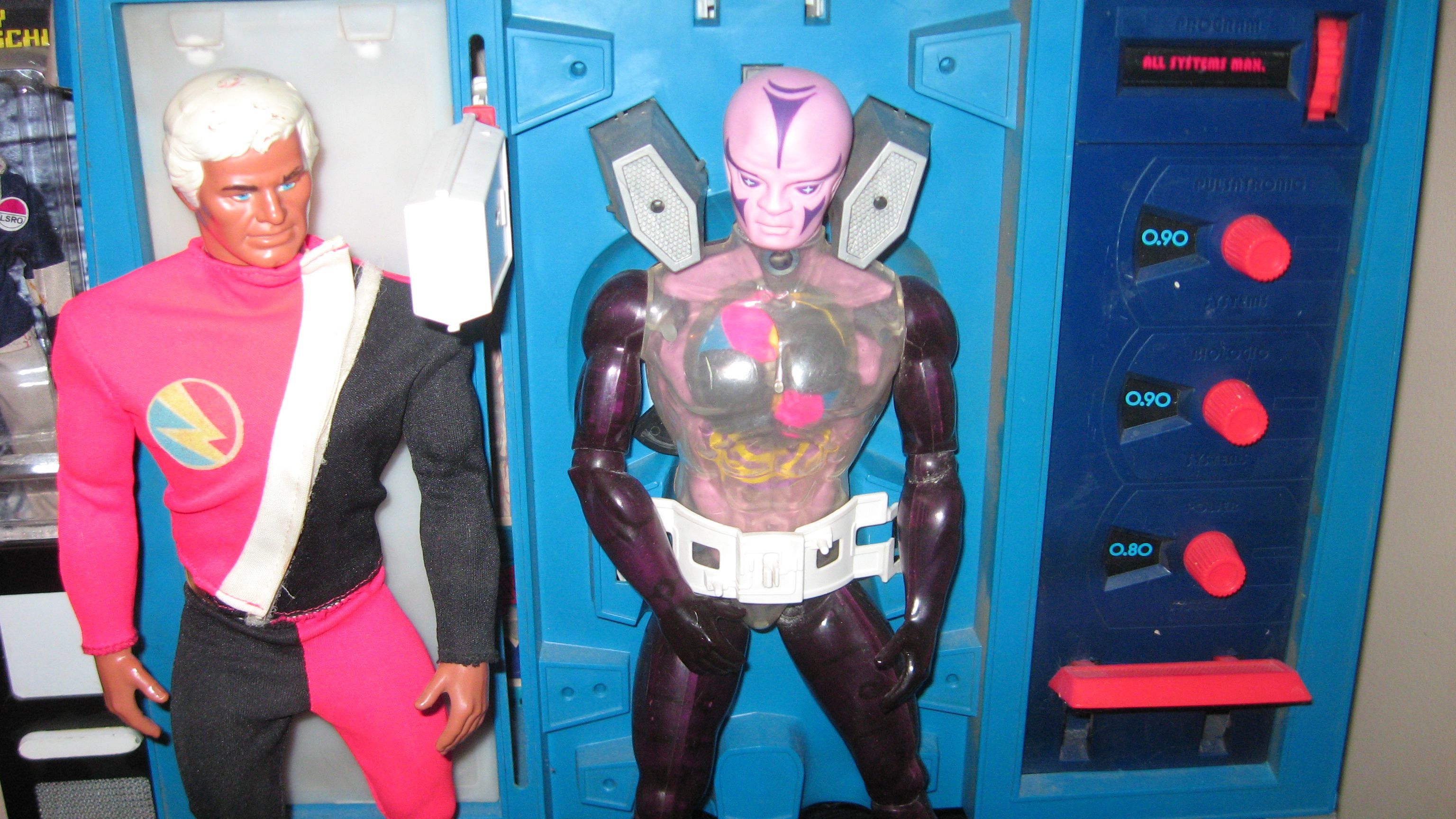 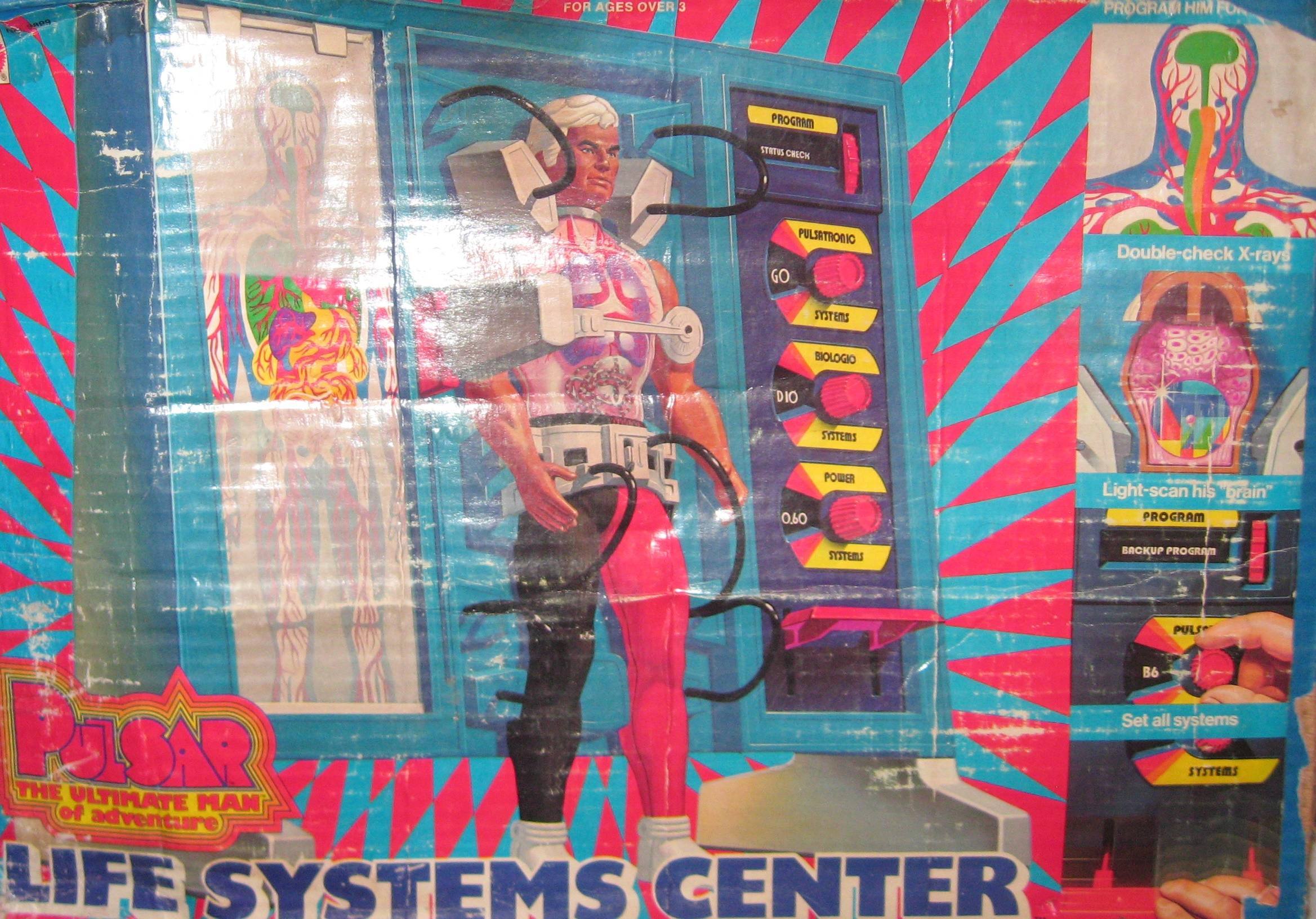 This white-haired hero wears a black and red uniform with lightning emblem or insignia on his chest. Remove the Velcro wrappings of his suit and you can see all the major organs of Pulsar’s chest: lungs, heart, intestines, everything.

You can even see Pulsar’s blood flowing around in there. “You activate his vital systems!” screamed the box, advising children to “Push his back, Heart beats! Lungs breathe! Blood flows!”  No doubt, this action was meant to compete with Colonel Steve Austin (Kenner Edition, that is…), who had a bionic arm and a bionic eye.

Pulsar also, apparently, could be programed for each mission you sent him on. You could lift his up face and “insert mission disks” directly into his brain. “He almost comes alive!,” said the box. Recommended for ages 5 and up, “no mission is impossible for” Pulsar.

Pulsar also had a nemesis, Hypnos “The Ultimate Enemy,” a dome-headed being with strange markings on his face.

And Pulsar’s headquarters was a “Life Systems Center” where you could scan the hero and take X-rays of this man of adventure. 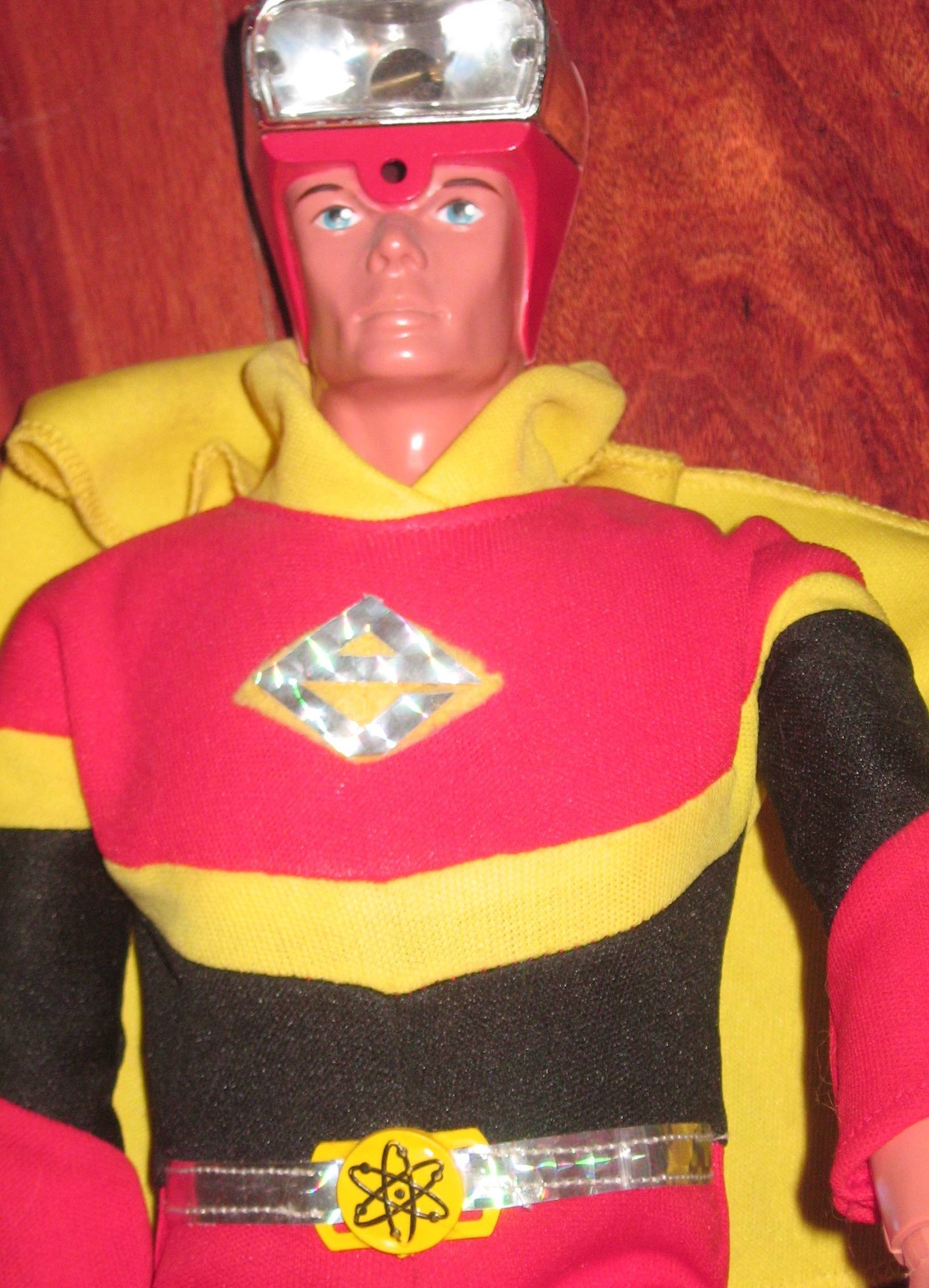 Described as “Ideal’s amazing electronic sentinel,” Electroman wears a bright red, black and yellow uniform with a dazzling “E” (for Electroman, one must assume) emblazoned on his barrel-sized torso. He also wears tall black boots and a hideous yellow cape.

The hero’s oddest fashion statement, however, is no doubt his elaborate helmet, a clunky red affair that shoots laser beams supposedly, but is really just an everyday flashlight. By adjusting a knob on the base of Electroman’s neck, you can change the settings of the laser ray from Stun, to Radar, to Guard.

Toy catalogs described the settings this way: “Electroman’s computer brain can detect the slightest movement and sound a warning. In radar position, he sends out flickering light that changes to a steady beam when he finds an enemy position.”

Electroman’s nemesis was sold separately, a brown hulking monster (“half man/half monster”) with red eyes, white fangs and a reflector embedded in his head, “Zogg the Terrible.”

Zogg was described on his black box as “A Creature so awesome only Electroman or you can defeat him.”

Zogg also came with a black and red laser gun which you could use to zap him, if you didn’t want to summon Electroman and his strange head gear.

When hit with Electroman’s laser ray, Zogg would topple over. Mission accomplished. 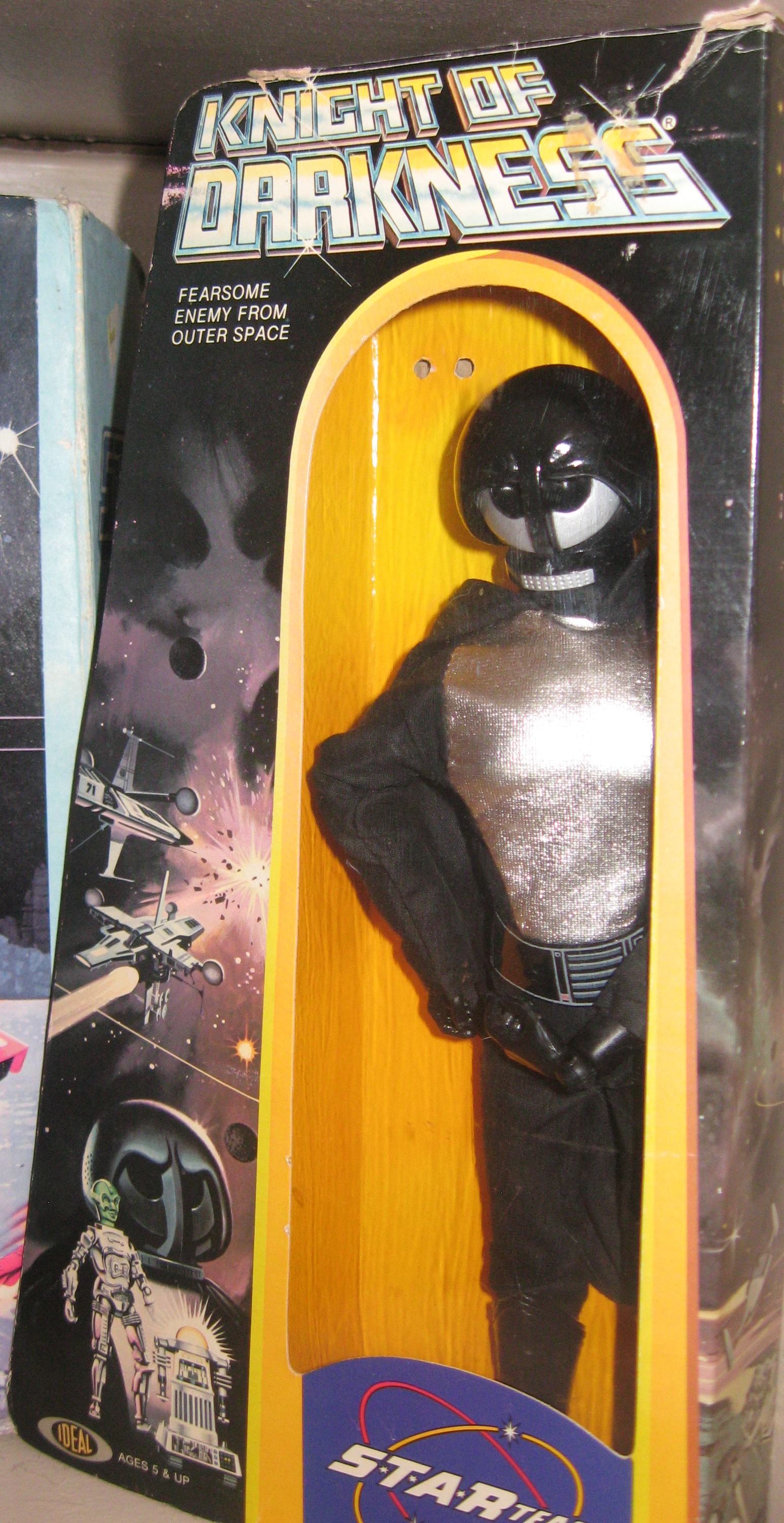 If Pulsar and Electroman sought to get a piece of the Bionic Action, Ideal’s STAR Team had another target in mind: The Star Wars market.

Ideal released two droid-like figures, ZEM-21 and Zeroid, and gave them a ship, the Star Hawk.  Their opponent was a Darth Vader knock-off extraordinaire called The Knight of Darkness. He had a black uniform, and a robotic-styled helmet.  Reportedly, George Lucas sued over such derivative designs, but lost because the Ideal toy line had been initiated, in a slightly different form, as early as 1968.

The Zeroid or R2 of the STAR Teamis described in the promotional materials as a “highly detailed action robot with moveable arms. ZEROID rolls on a twin-tread base.  Flip on his special flashing signal lamp and send messages to his friends.”

ZEM-21, the Threepio knock-off, was silver instead of gold, and had a green face. 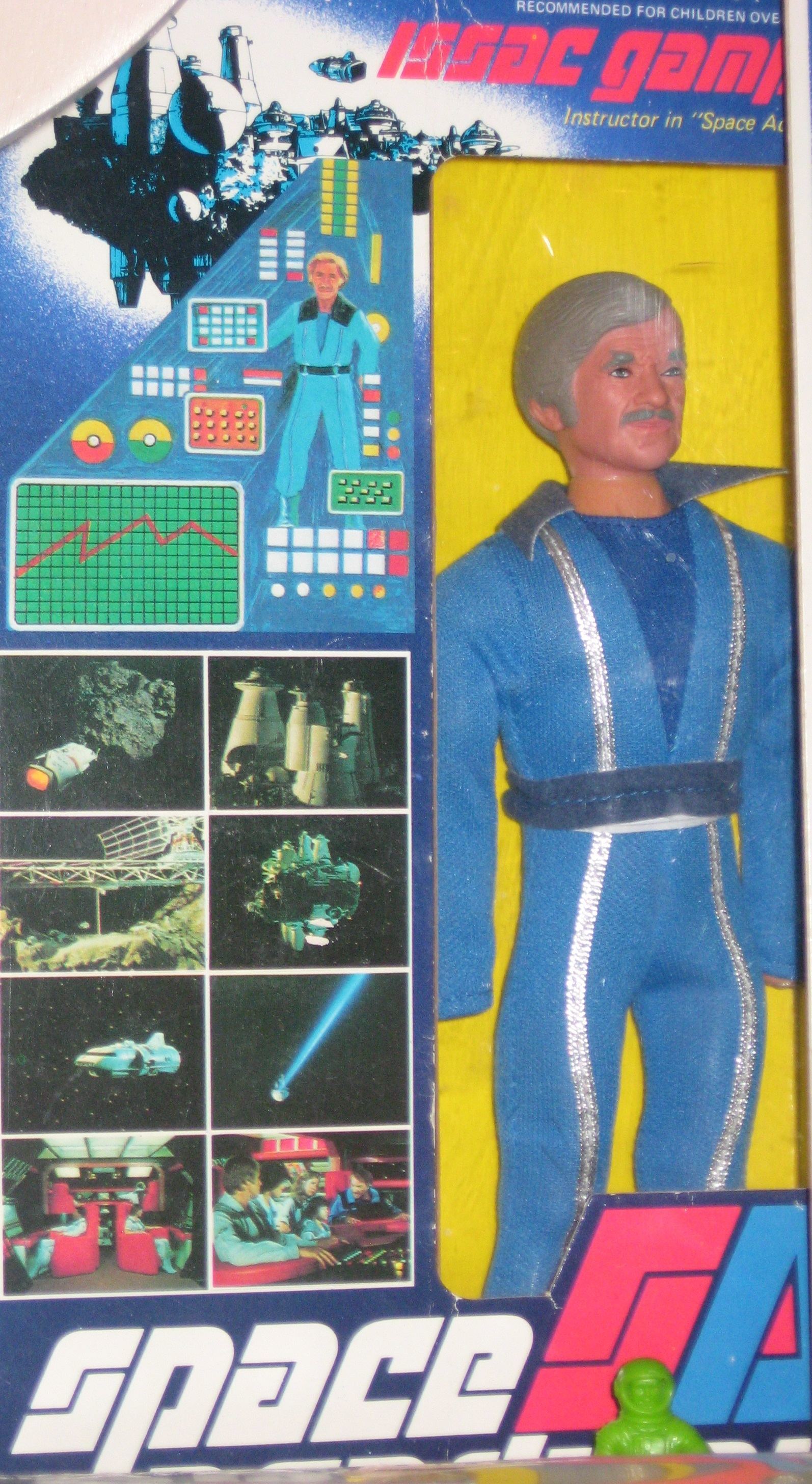 In 1977, Lou Scheimer’s Filmation produced a live-action Saturdary morning series called Space Academy, about a group of cadets training to become responsible officers of Star Command.  The series lasted just one season, but managed to inspire a (now obscure) line of action figures.

Four Space Academy action figures were released and distributed by Woolworth Co., (New York, NY, 10007).  They were produced by Hasbro/Aviva, and their price tag shows they cost $3.99 at the time (though Loki, being shorter than the rest, was $3.33).

There are four figures in this set. The first is Isaac Gampu, the character played by Lost in Space’s (1965 – 1968) Jonathan Harris, and the commander of the academy. On the back of Gampu’s box is this description: “Instructor in Space Academy and Favorite of the students, Professor Gampu, “Issac” to his classes.”  So, yes, the name Isaac is actually misspelled.

The other figures are students Chris Gentry and Tee Gar Soom.  The young alien orphan character, Loki, is the final figure in the set. Sold separately were other space costumes for the characters. To my disappointment, the line never went further, and we never got any Jason of Star Command action figures either. 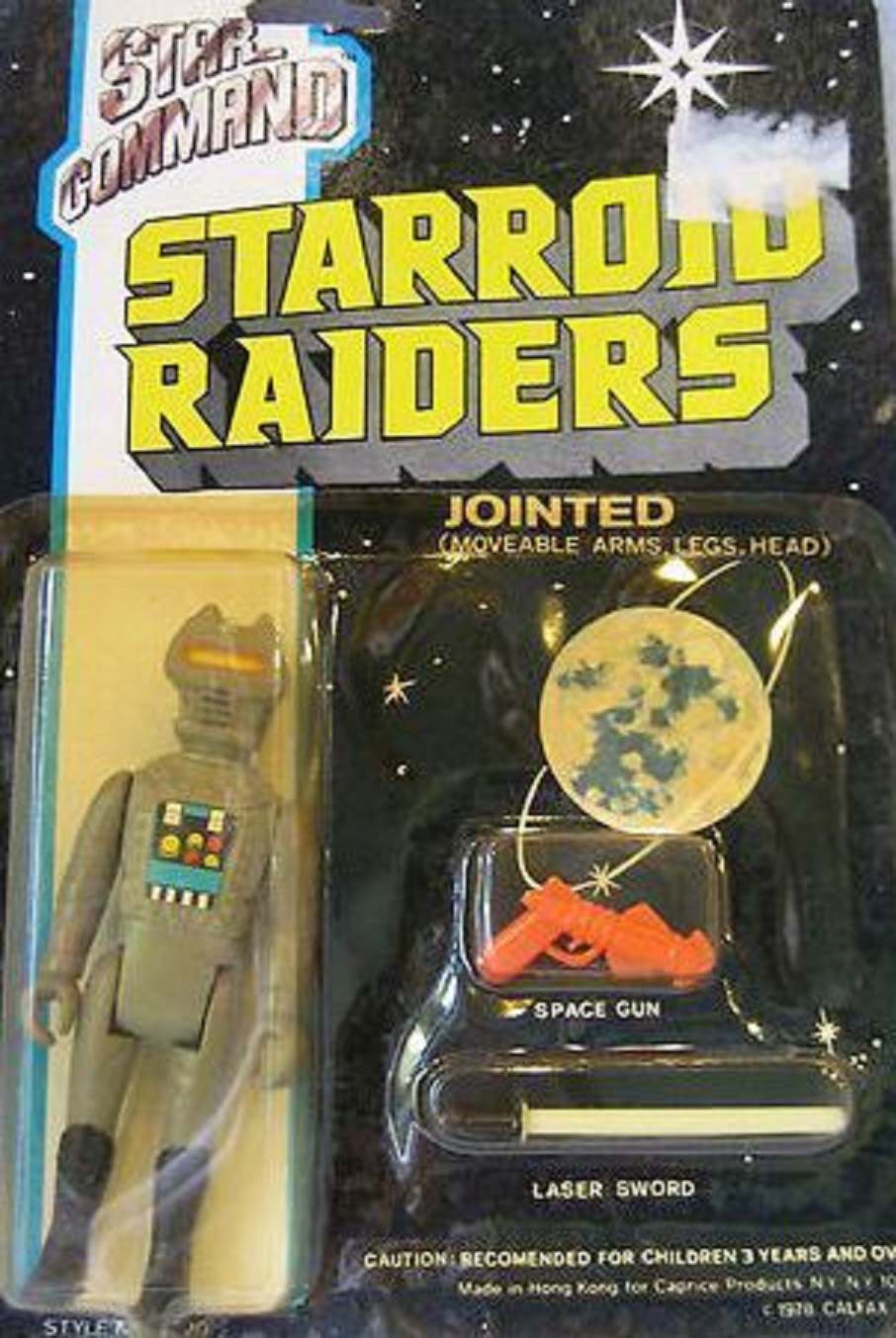 In the immediate aftermath of Star Wars, so many toy knock-offs abounded.  But one of the most interesting of these lines came from Tomland and was called “Starroid Raiders.”  These are small, Kenner Star Wars-scaled figures who carry blasters and (the ubiquitous in the seventies…) “light”  or “laser” swords.”

One weird quality of the Starroid Raiders is that they all possess soft, molded, weirdly out-of-proportion heads that could be yanked out at the neck.  Also, I never understood all the characters/figures well enough to guess who was a good guy and who was a bad guy. Everyone looked equally alien.

The Starroid Raiders had names like “Haza,” “Aton,” “Papi” and “Koga,” which made it even harder to determine if you were playing with the equivalent of a Chewbacca or a Gamorrean Guard.  At some point, too, the Starroid Raiders became known as The Star Force, and even had a ship: a black, winged vessel (highly reminiscent of the Colonial Viper on Battlestar Galactica [1978]).